On the first Saturday in October, I went to Nine Mile Canyon to climb up to a few sites that I’d spotted from below over the last few years but had never felt ambitious enough to visit up close. The first such site was what appeared to be a granary. About two and a half years earlier I had walked within 400 feet of it, but I didn’t know it was there at the time. It took me nearly an hour to climb up to it, taking my time and looking through binoculars for anything else of interest along the route. I noticed some Fremont pictographs that I should have seen the last time I’d hiked up here, but I failed to notice them then. I reached the rock wall and it was much larger than it had appeared from below. It was likely a lookout or a defensive structure. I had to drop my backpack and gear in order to make the climb into the structure, which consisted of dry-laid stones in front of a cleft in the cliff face, with fill dirt making a level floor inside. I saw zero signs of occupation on the surface–no lithics, potsherds, nor fire-reddened rocks.

Masonry structure viewed from far below 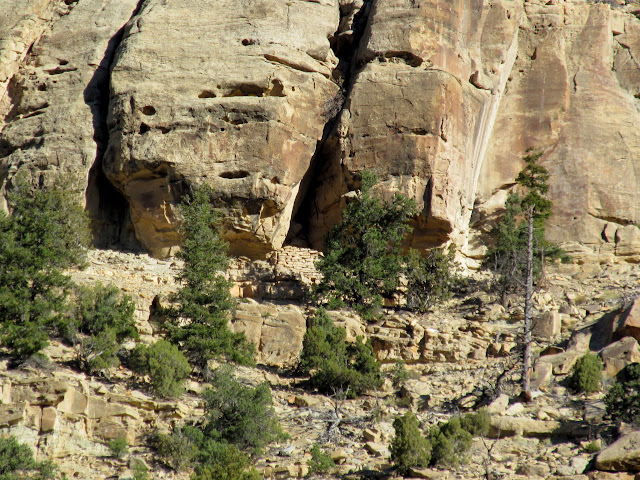 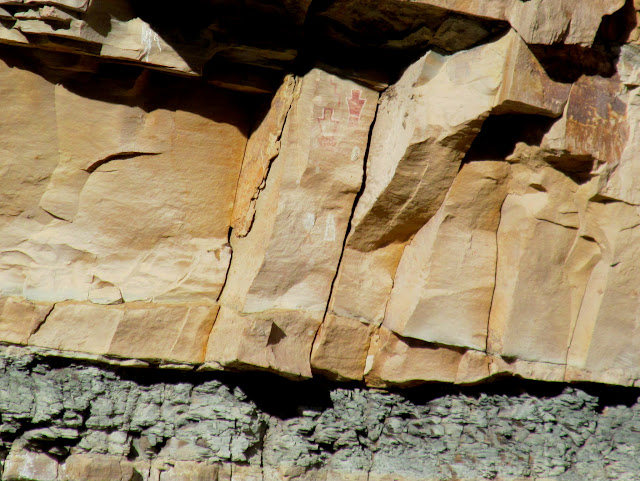 Dry-laid masonry wall and fill behind it 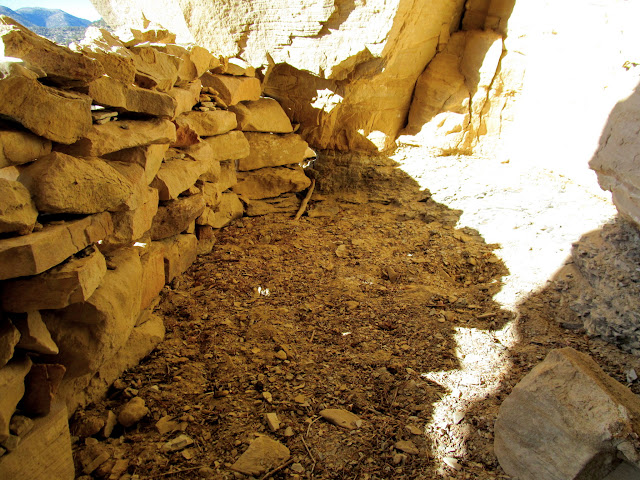 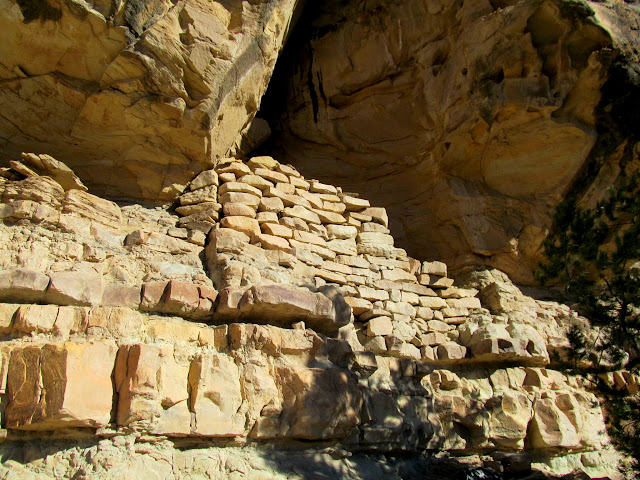 Another nearby masonry structure that I’ve visted before 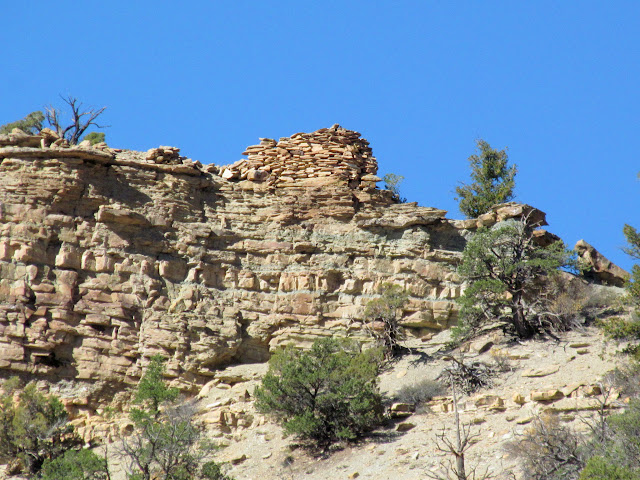 At my next stop there were three sites within close proximity that I’d planned to hike up to individually, each no more than about 400 feet above the canyon floor. Studying the terrain from below, however, I was able to piece together a route that would connect all three sites without having to ascend and descend several times. The first location was a small petroglyph panel. It was fairly conspicuous from the road, but the panel was so small and so high that it didn’t have enough appeal for me to make the climb. The effort was worth it, though. There were figures on the panel that I couldn’t see from below, and what had appeared to be a simple snake actually had horns and legs.

Arc with patinated wall below 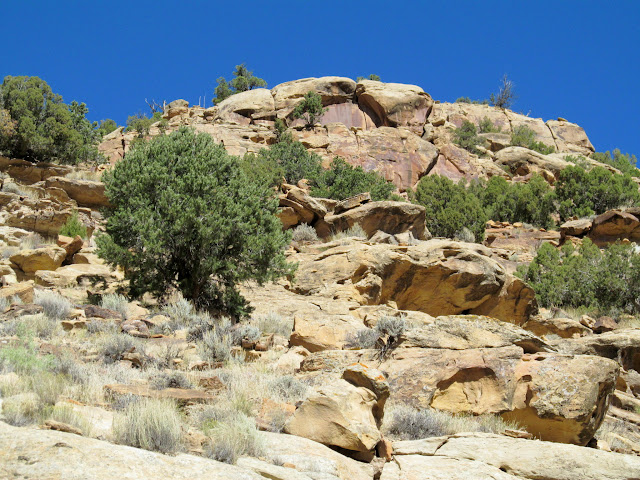 The whole panel, with some weathering damage 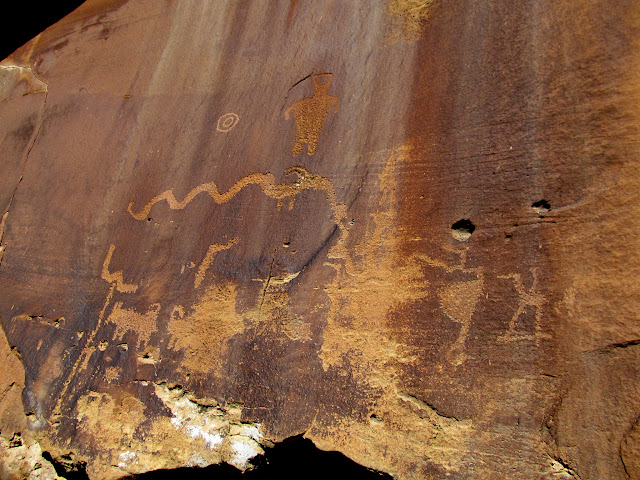 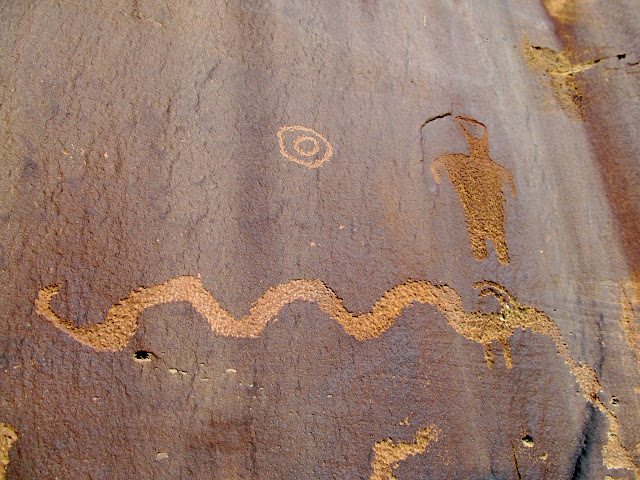 Next I climbed higher and traversed around a couple of ridges to reach a cave/alcove that is also easily visible from the road. Some relatively recent rockfall covers the front, and it appears that portions of the overhang are ready to fall at any time. Again I found no indications of occupation, though somebody had left a 1-gallon plastic jug in there.

Cave with rockfall in front of the entrance 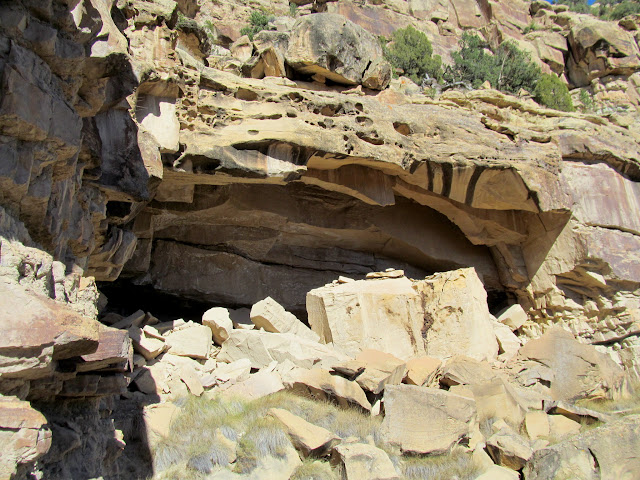 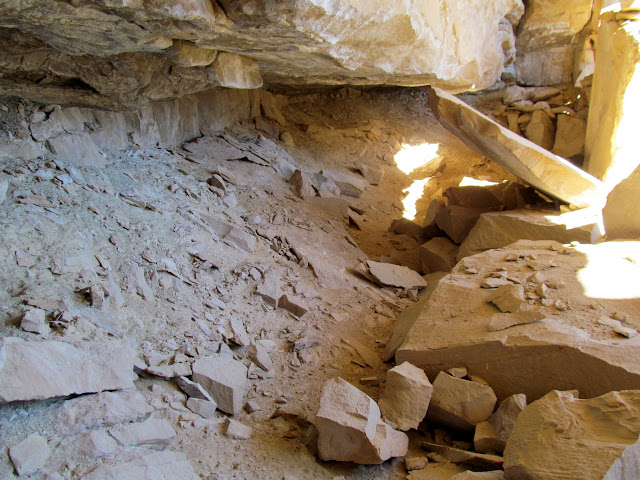 View out of the opening 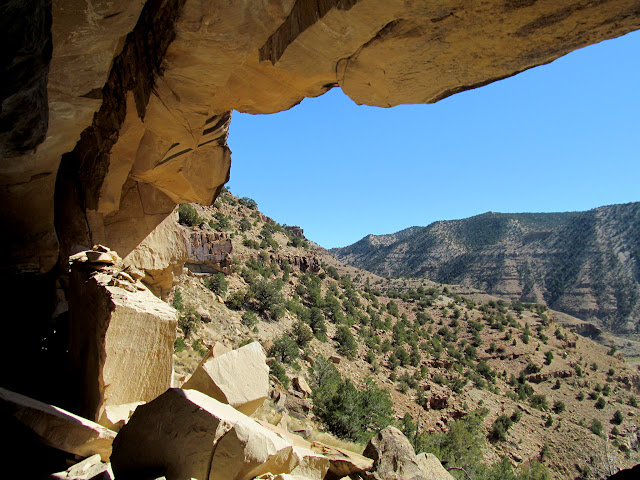 My next destination was farther to the side and well below the alcove, but while working my way there I spotted a petroglyph well above me. I scrambled up a steep, bouldery slope to reach it. The panel consisted of one large and one small bighorn sheep, with a line below them that continued around a corner on the cliff. On the other side of the corner was another petroglyph of some sort of animal, possibly a canine. Some of the tool marks were rectangular with 90-degree corners, as though they were made with a metal chisel. 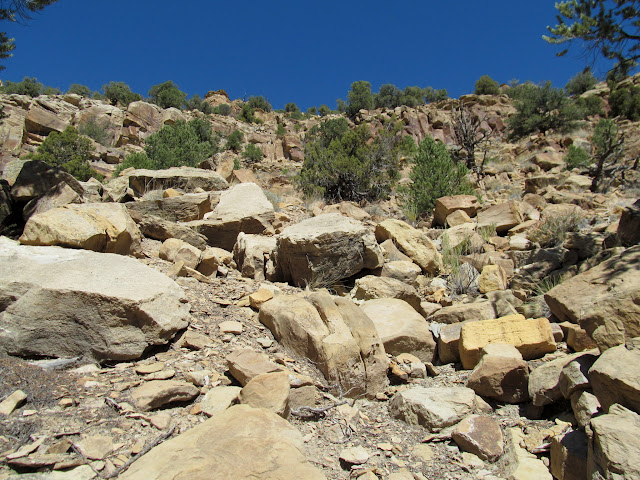 Two bighorn sheep petroglyphs, with line extending around the corner 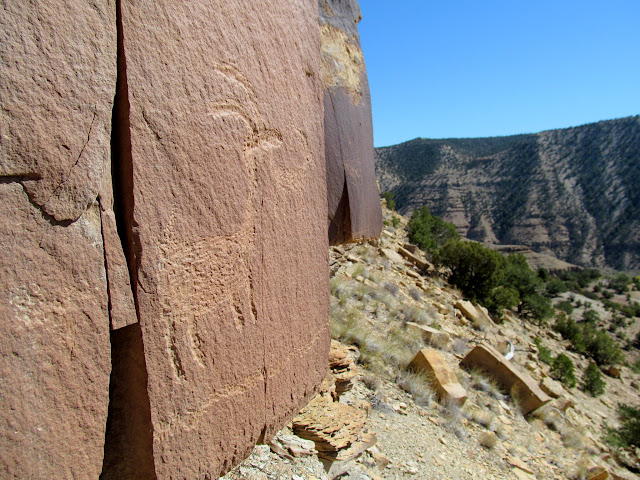 Quadruped, perhaps a canine, around the corner from the sheep 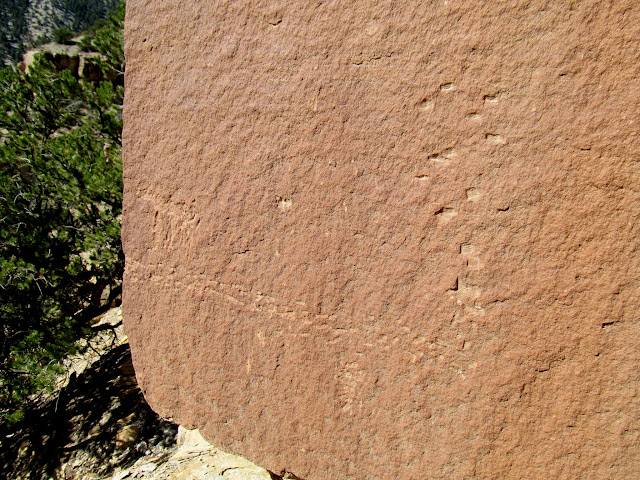 Since I was already fairly high and getting closer to a ridgeline between Nine Mile and a side canyon, I continued to the ridgeline and then climbed up the next two or three cliff bands, but found nothing of interest. I attempted to descend the ridgeline to reach my final destination, which were several nice petroglyph panels about 100 feet above the road, but inaccessible from below. While hiking down the ridge I encountered a tall cliff and ended up having to go fairly far to find a way down. While searching for a route down I found a shed deer antler–the first I’d ever seen in Nine Mile Canyon. From just above the petroglyph panels I looked and looked but could not find a way down to the same level as the rock art. I did find some detailed petroglyphs nearby that were accessible. The panel consisted of an archer with distinct fingers and toes propelling an arrow toward a sheep with cloven hooves, with its head thrown back and its mouth open.

Ridgeline above a side canyon 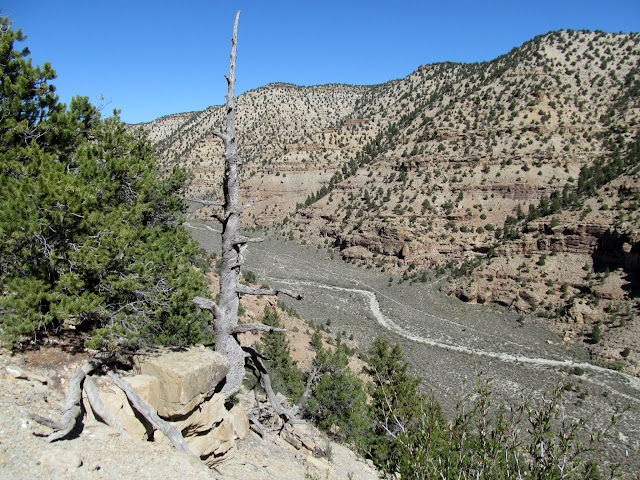 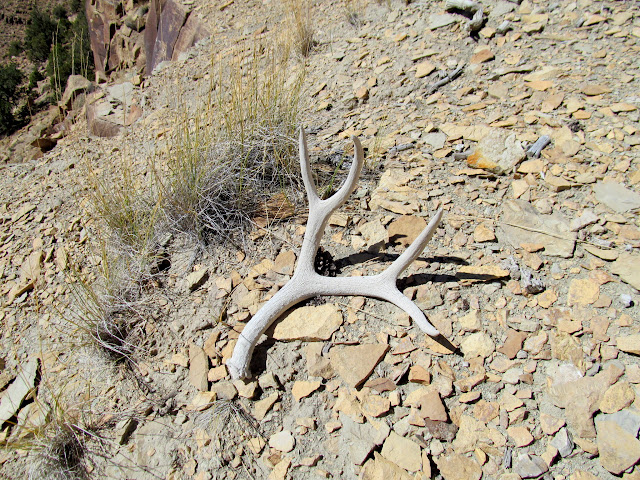 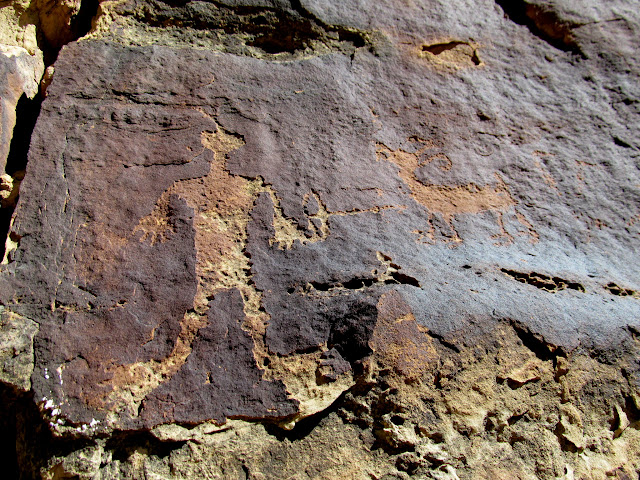 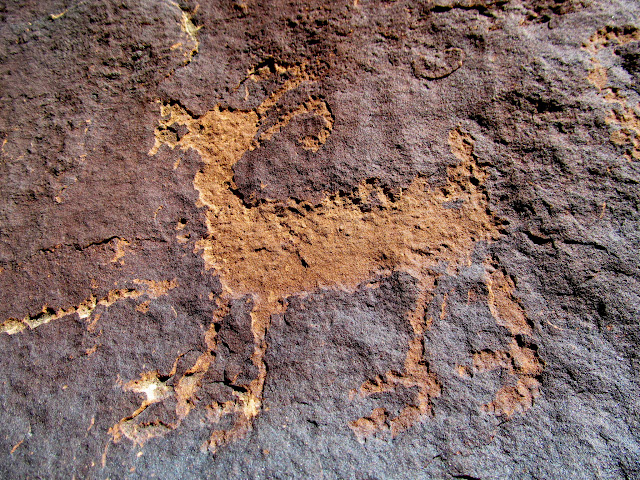 I finished the descent back to the road and took photos of the inaccessible petroglyphs from below. I’d been hiking for about five hours and hadn’t really seen that many worthwhile things, so I drove another mile down the road to try locating a granary that I’d read about. I wasn’t sure which side of Nine Mile it was on, but I located it with binoculars on the south side of the creek. The granary is on BLM land, but to see it up close would require crossing private property. In addition, it appears to be inaccessible from either above or below, so getting a close look probably isn’t possible. 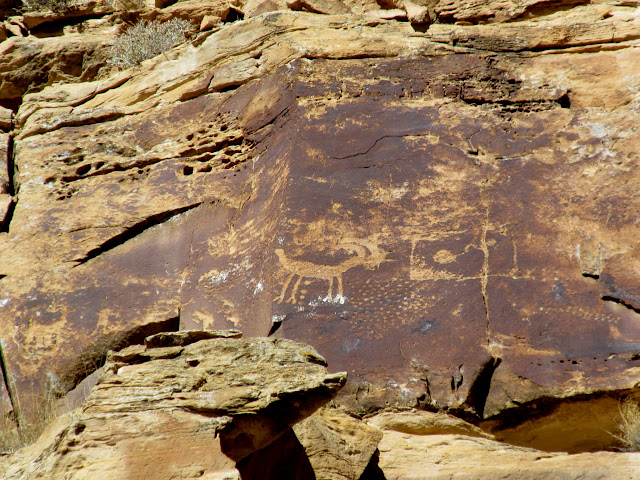 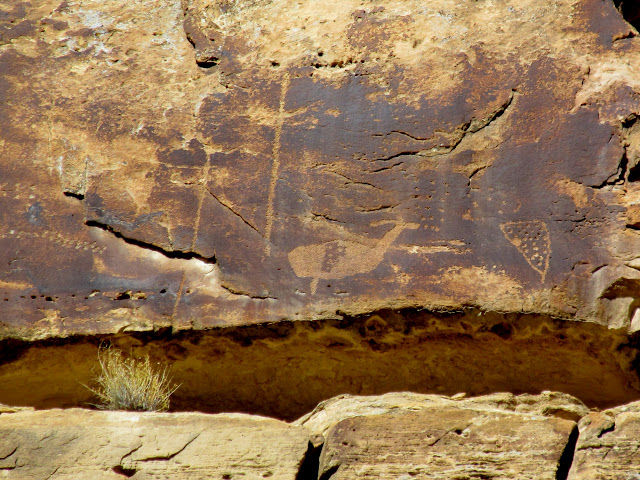 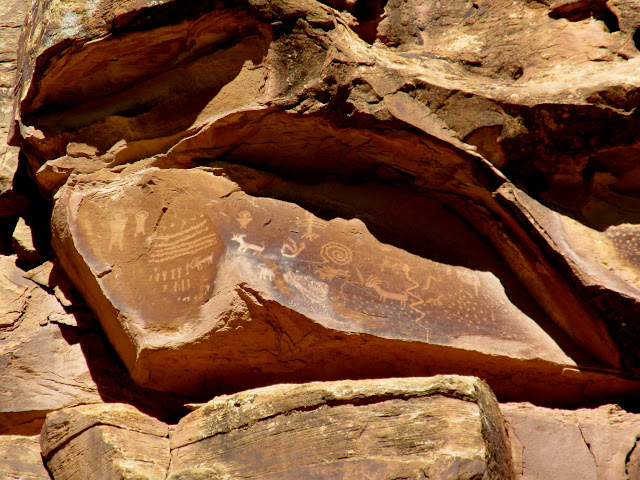 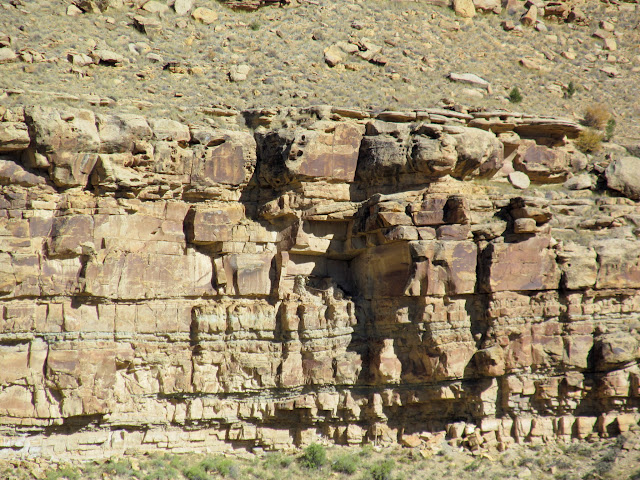 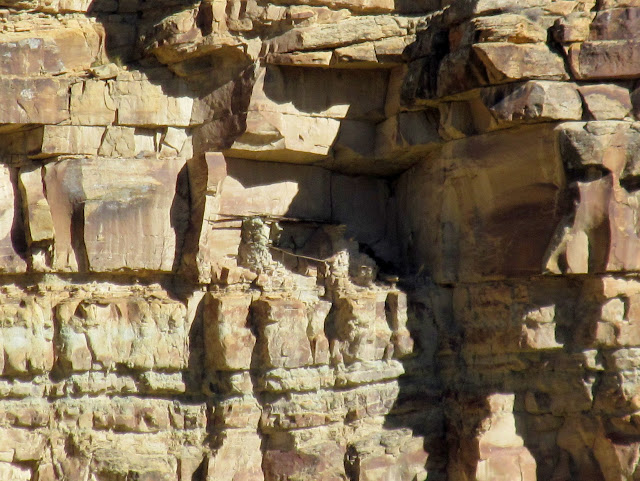