The first weekend in August was one in which, for a change, I hadn’t made any hiking plans. I was awakened early on Sunday morning and couldn’t get back to sleep, so I decided I might as well get up and do a little close-to-home hiking before it got too hot outside. A quick look at my to-do list in Google Earth yielded some waypoints in Nine Mile Canyon that would make for an easy trip. Early last year, after Alan and I found a structure high above the canyon and I realized how easily visible it was in Google Earth, I began searching the satellite imagery for other such structures and had identified a lot since then. I loaded waypoints into the GPS for the three that were easiest to access and headed into the canyon.
I parked near the bottom of a ridge that I hoped would lead me to the first structure. During the ascent there were a few minor cliff bands that were easy to bypass, and they yielded a small amount of rock art. I reached the structure and it resembled the many ruined pit houses that are closer to the valley floor, but its height above the creek and extensive view of the surrounding area leads me to believe it served as a watchtower rather than a residence. I explored around the top of the ridge for any other signs of occupation and didn’t find anything–not a single potsherd or lithic flake. While descending back to the road I found some pieces of dinosaur bone piled up in a small alcove. I assumed somebody had collected the bone fragments and left them there, but then I spotted a bone in situ, protruding from the cliff above. Very close to the bottom of the ridge I noticed some stacked rocks that I hadn’t seen on the way up. I investigated more closely and realized there were two very ruined pit houses and a lot of potsherds there, maybe 200′ from where I was parked.

Satellite image of the first watchtower 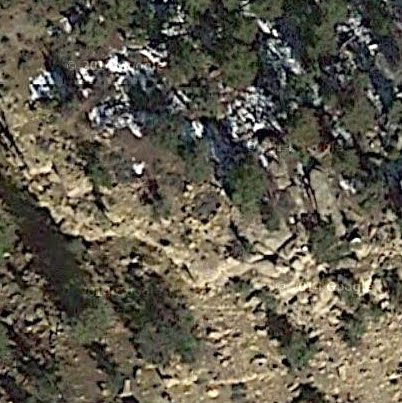 The beginning of the climb up the ridge 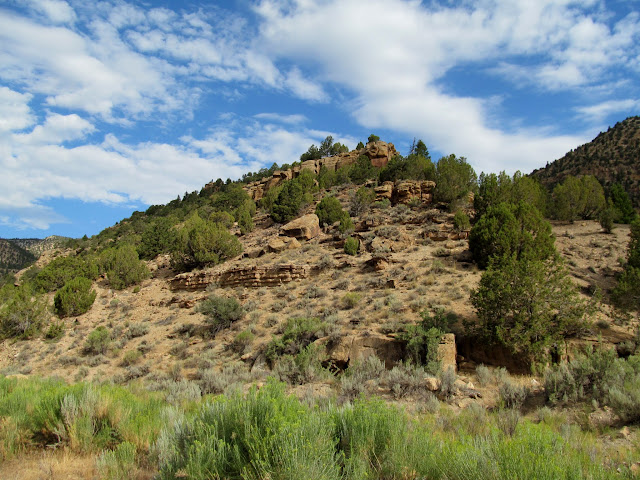 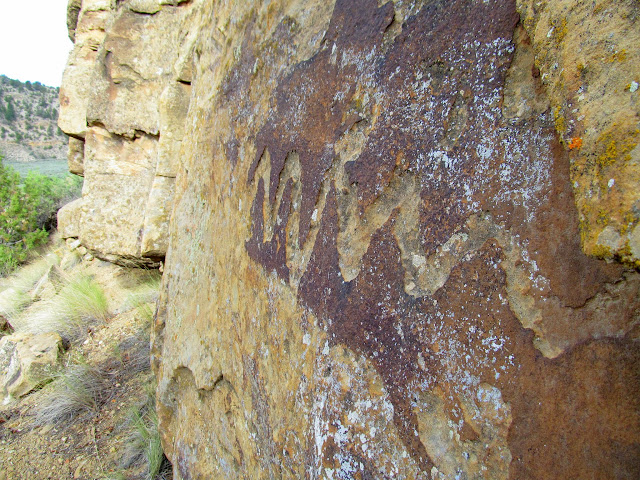 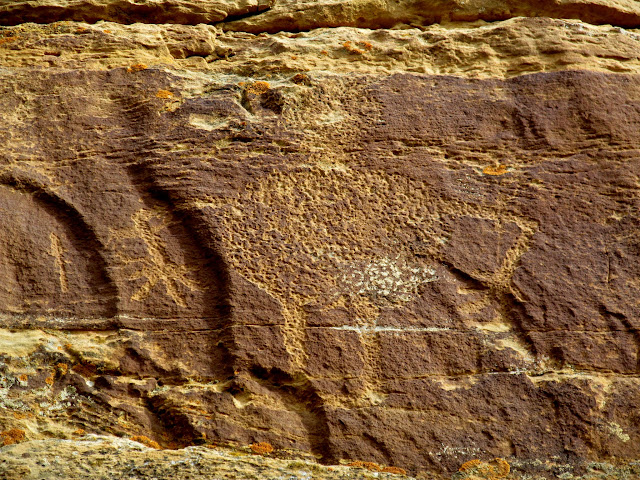 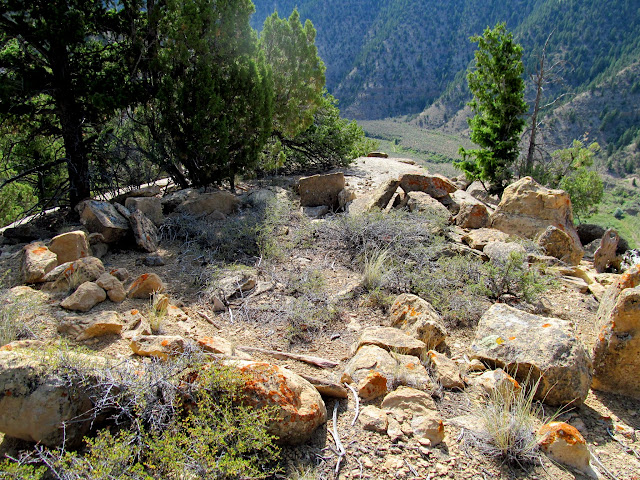 The Jeep parked below 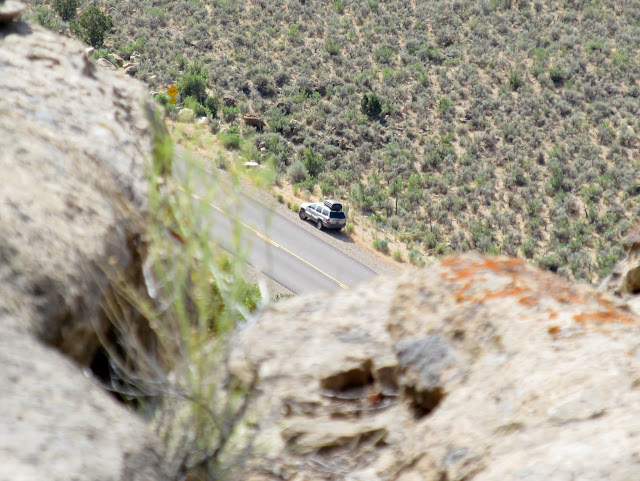 Dinosaur bone embedded in the cliff 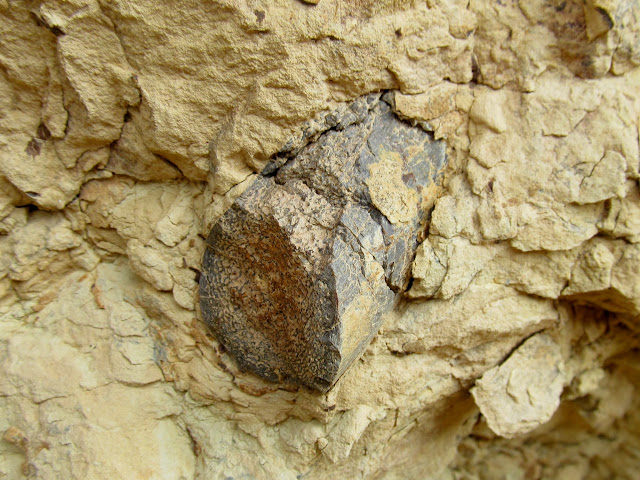 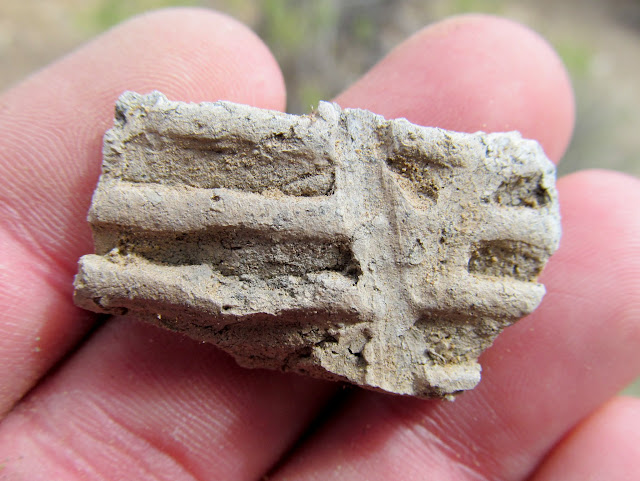 The second possible structure I wanted to hike up to looked like little more than a loose ring of rocks in the satellite imagery. While hiking up to it, I stopped to look at a pit house that was visible from the road, and a little farther up I ran across a petroglyph panel. Due to some tall cliff bands I wasn’t able to hike directly from the canyon bottom up to the structure, so I took a long, circuitous route. The structure turned out to be precisely what I thought it would be–a rough stone circle with no signs of actual walls and no depression in the center. Perhaps it was the start of a watchtower or pit house that never got completed.

Satellite image of the second watchtower 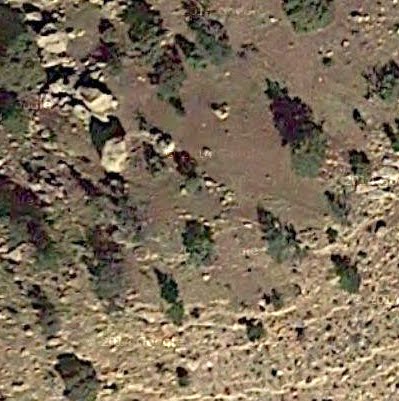 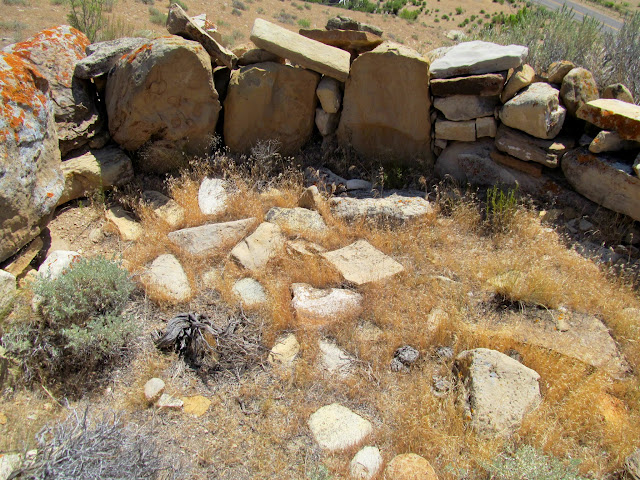 Petroglyph panel on the way up the ridge 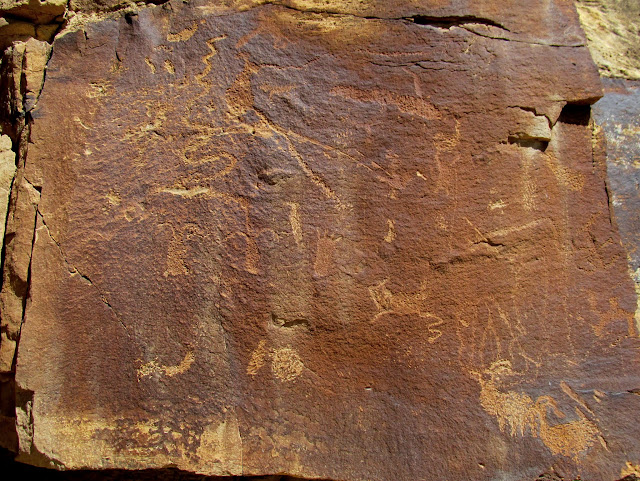 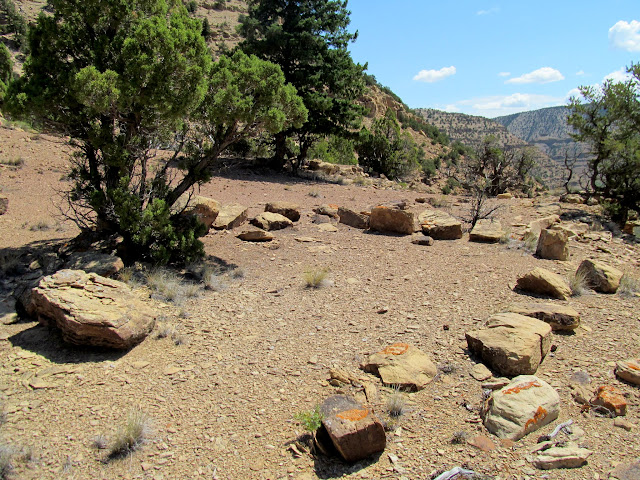 When I returned to the Jeep from the second structure it was 11:30AM and already too hot to make an attempt on the third structure, which would also be the most difficult to access. I moseyed down the canyon and, from the comfort of an air-conditioned vehicle, scanned the cliffs for any rock art that caught my eye. I was particularly interested in any pictographs that I hadn’t already seen. I found some white dots and squiggles, interesting inscriptions from 1928, and possibly the tiniest bighorn sheep petroglyph I’d seen. I stopped to get a closer look at one pictograph panel that just looked like zig-zag lines and a rainbow, but somehow I missed the faint Fremont figure until after I returned home and ran DStretch. It was one of my favorite finds of the day. 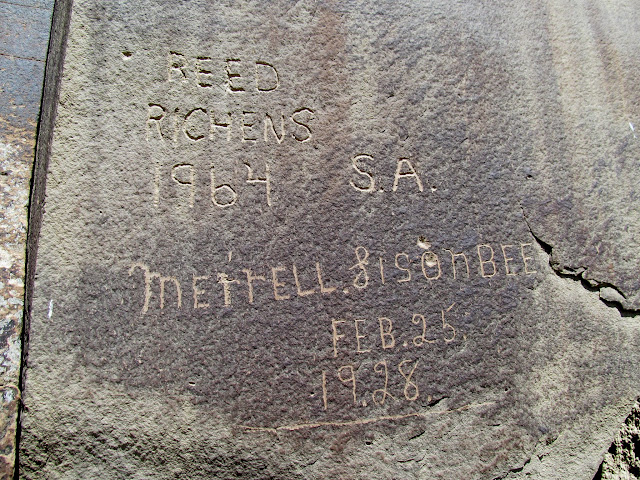 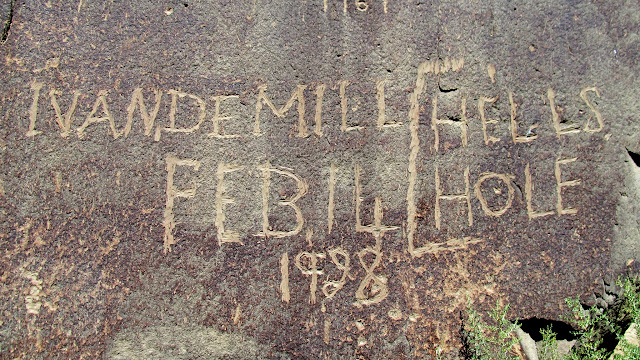 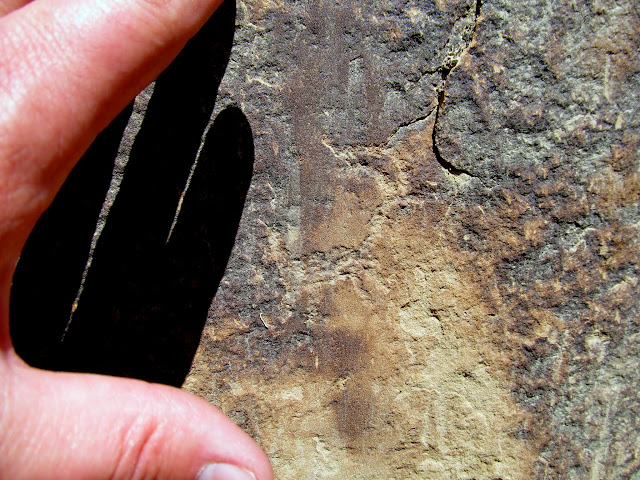 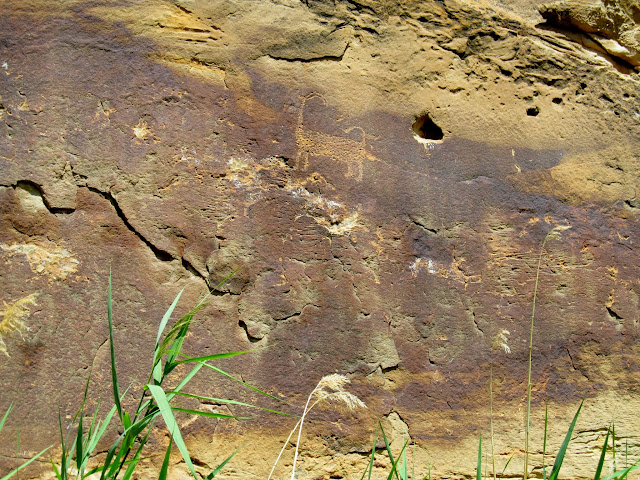 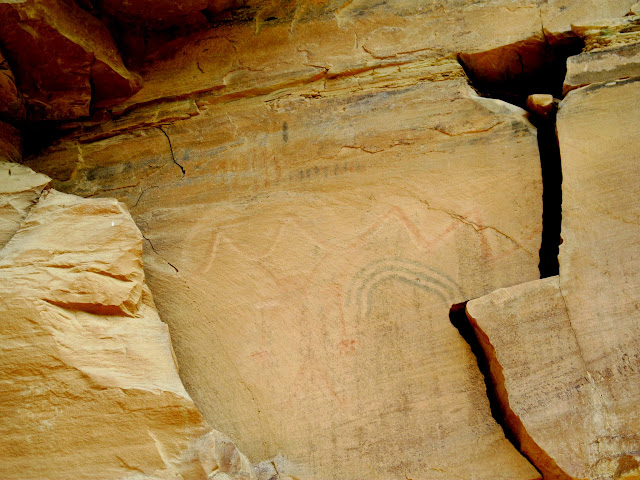 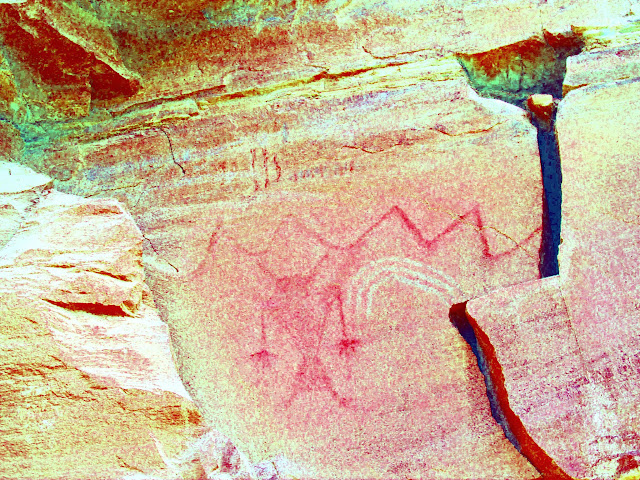 My absolute favorite part of the day, however, was seeing an actual bighorn sheep. I’m sure I’ve seen hundreds of bighorn petroglyphs in Nine Mile but until this point I hadn’t seen any in the flesh. This one was just hanging out where the road splits to go up Cottonwood Canyon. He didn’t seem to concerned about me as I pulled up in the Jeep. I observed him out of the window for a few minutes, then got out of the vehicle and got a little closer for more photos. I began shooting some video while the sheep casually grazed, but then he decided he suddenly needed to be somewhere else and bolted for the creek. It was a treat to be able to watch him for a while, and it perfectly capped off a nice day in Nine Mile Canyon. 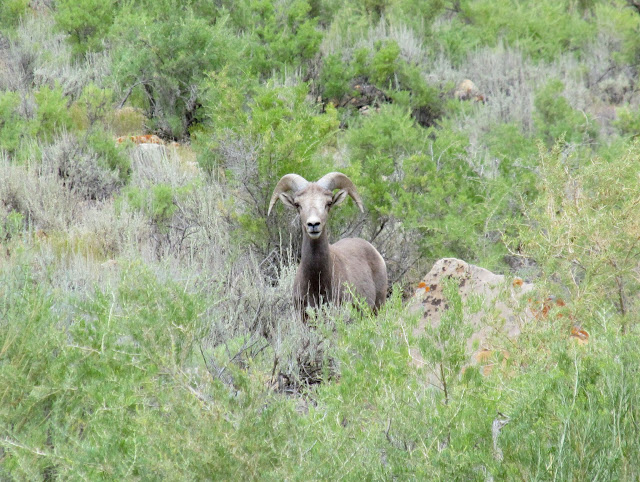 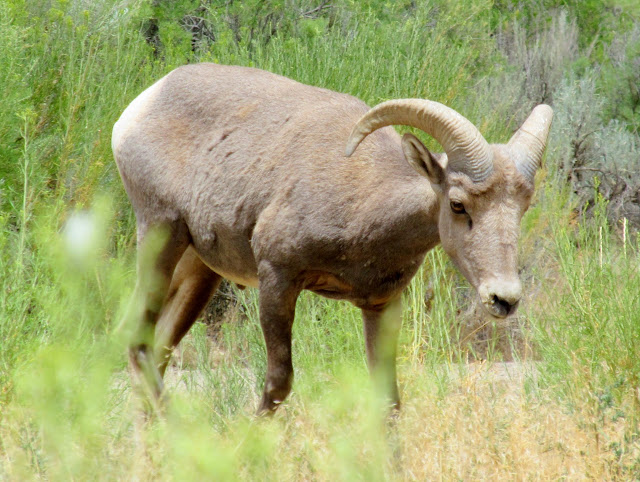