On the weekend of July 24th, which is the Pioneer Day holiday here in Utah, my family and I went on a camping trip and suceeded in finding a secluded spot to spend four days and three nights. When I drove the Lowry Water Road in June I took note of some nice campsites, and the lower end of the road was good enough to get the camp trailer there. On Thursday, five of us (Michael brought a friend) piled into the truck and, with trailer in tow, headed toward Joe’s Valley. The road to Lowry Water looked quite a bit different from the month before. Rain storms had washed a lot of mud, rocks, and debris onto the road, so in a couple of spots all five of us got out and did some road work. It took 4-low to get past one ugly mud bog. We arrived at camp without having seen anyone else camped in the area. We spent the evening and all the following day exploring around camp and wading in the creek.

Setting up camp on Thursday evening 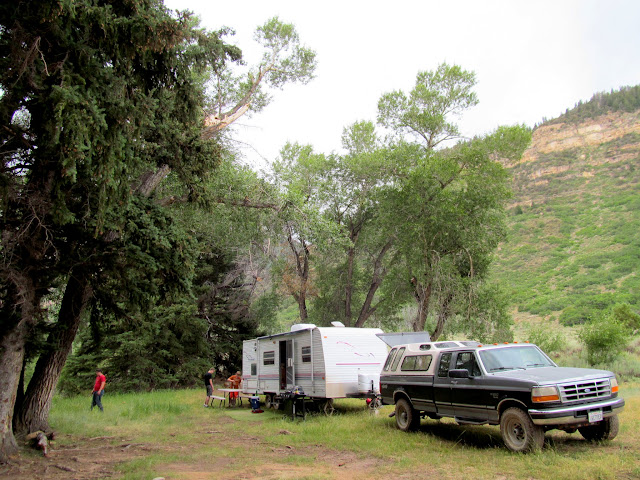 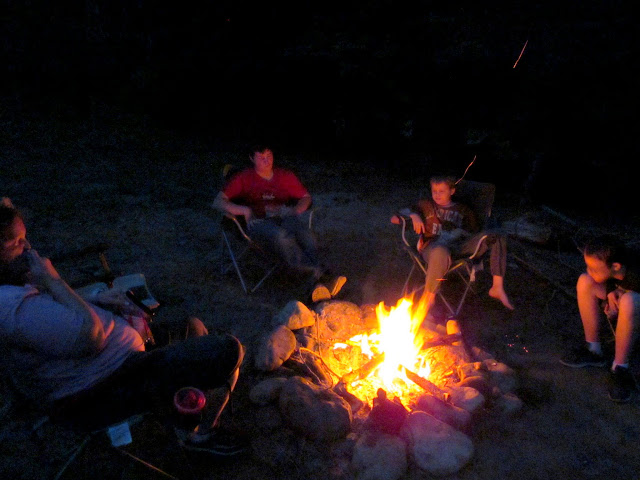 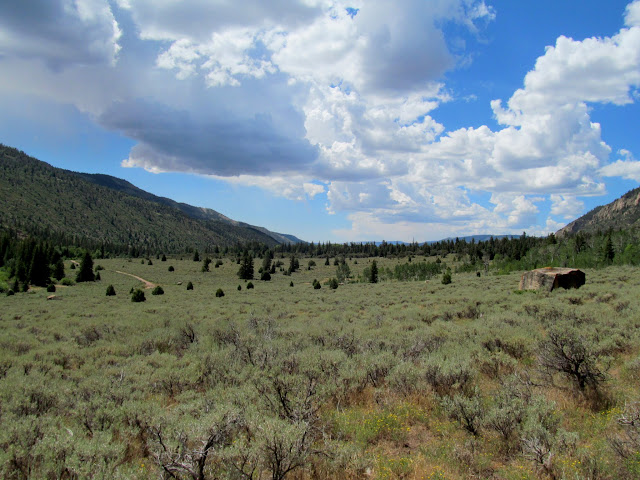 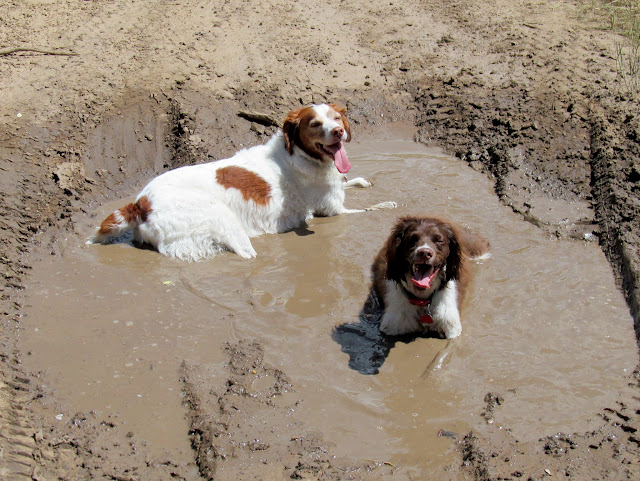 The kids in the creek 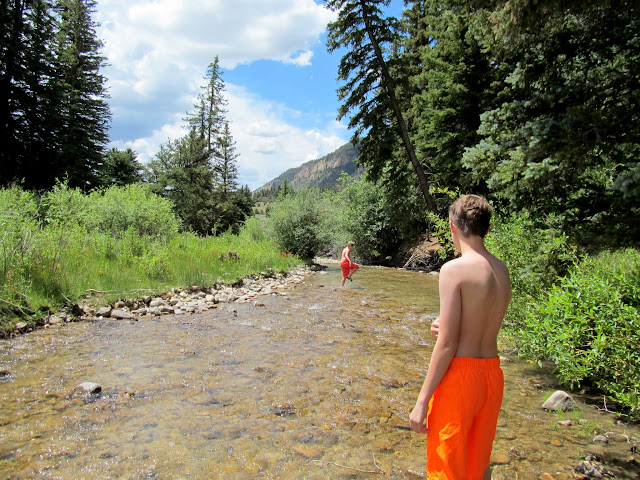 Chris arrived on Friday evening and the following morning he and I hiked the nearby Black Canyon trail. The road to the trailhead was too rough to drive all the way there, so we walked the road a little before it narrowed into a proper trail. It didn’t appear that the route gets much use, and with thick forest all around it doesn’t offer many views. It was a moderate and steady climb almost the entire way, with a couple of more level, open areas that were probably once used to graze livestock. In those open areas we found a lot of aspen trees with names and dates carved into them, some being well over a century old. Other trees had somewhat amusing things carved into them. We turned back before reaching the upper end of the trail, and by the time we reached the bottom we’d hiked about four hours and nearly six miles on the trail, with 1,200′ elevation difference. We returned to camp, rounded up the rest of the gang, then drove to Joe’s Valley Reservoir for a quick, refreshing swim. 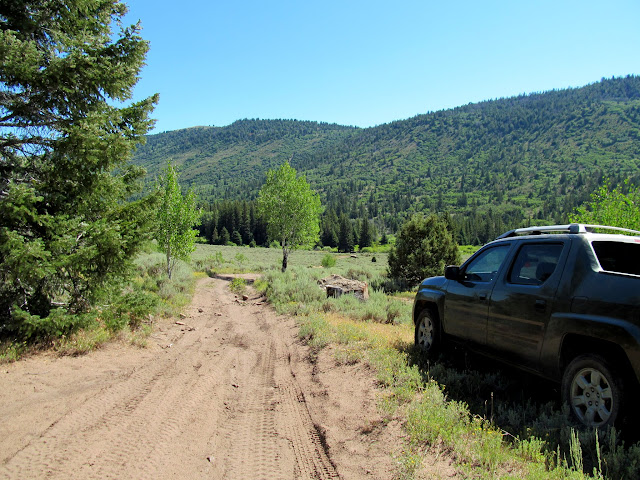 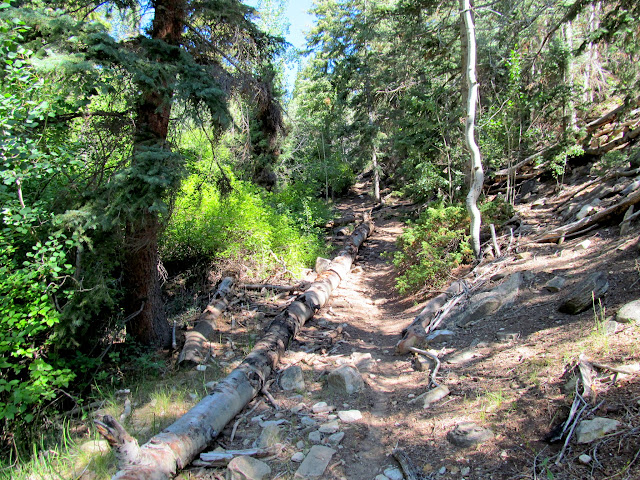 Reeder Ridge south of the canyon 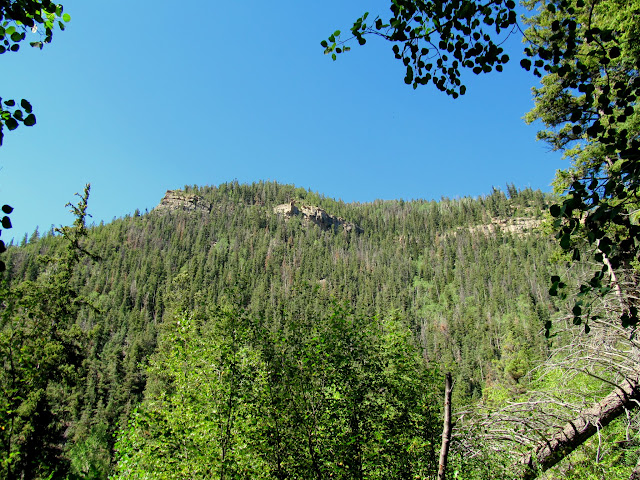 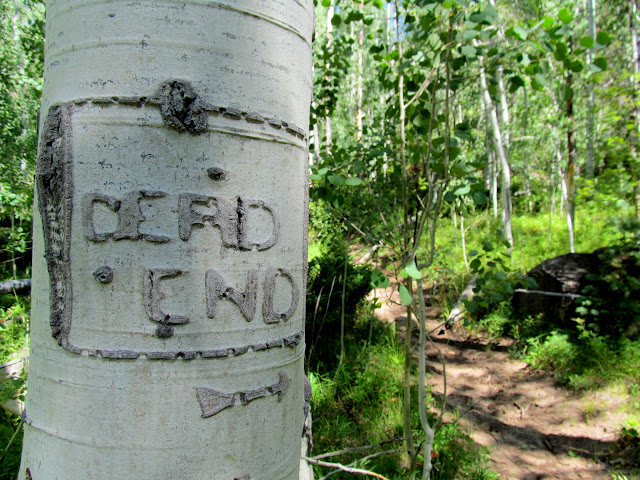 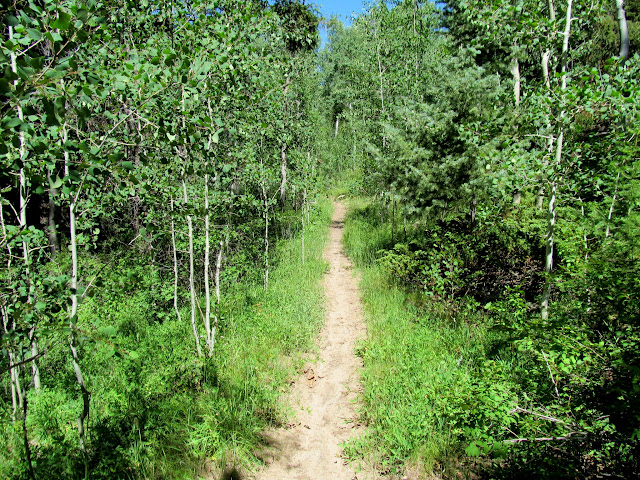 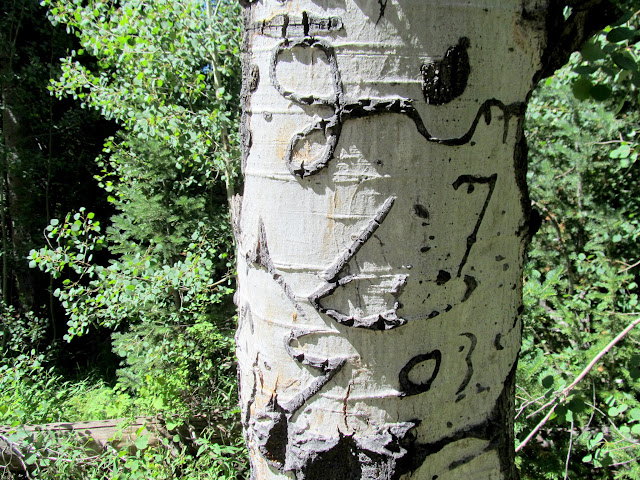 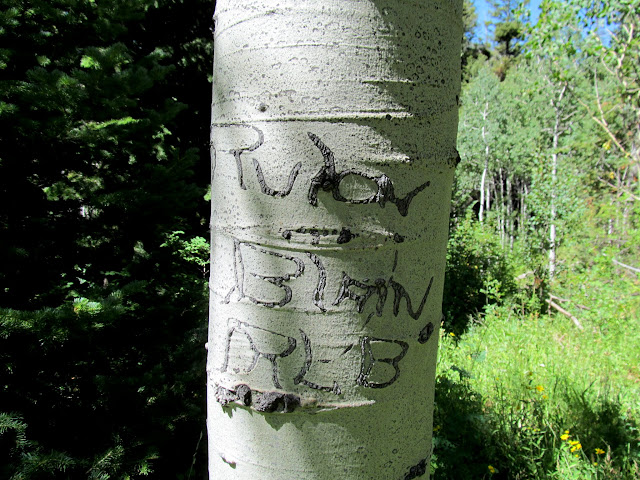 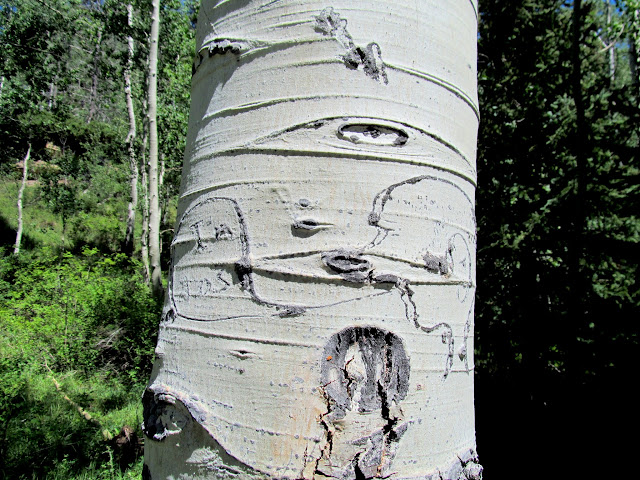 Forest Ranger (on the same tree as "I’m Lost" 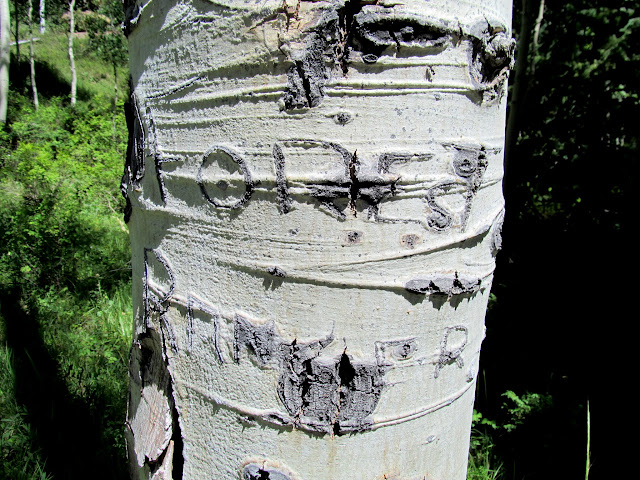 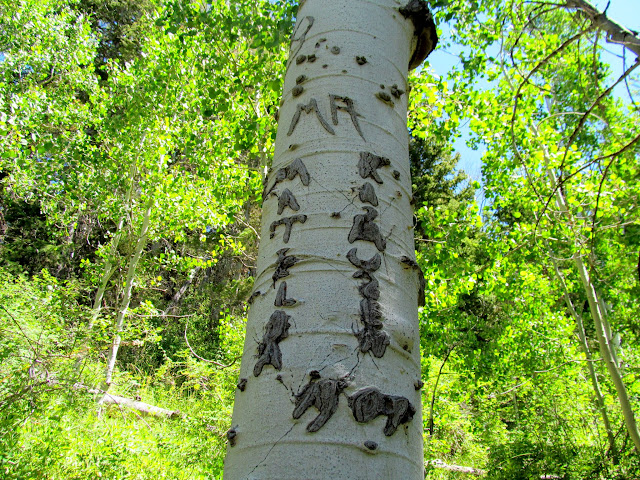 1910 carving that is almost gone 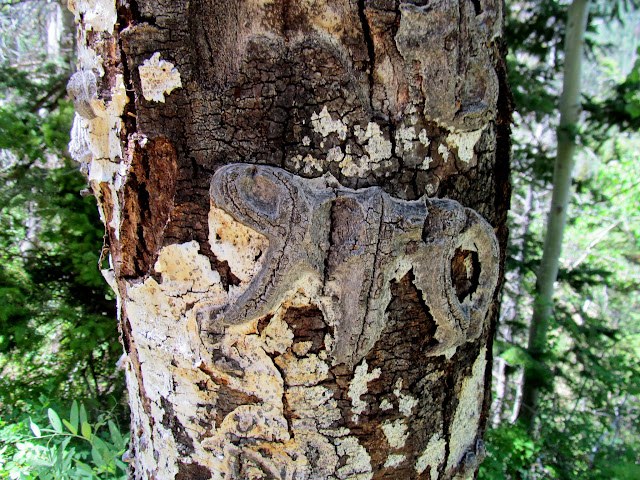 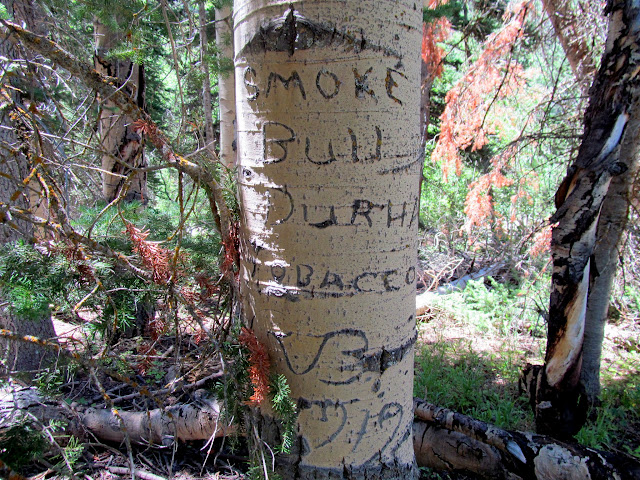 Hiking on the Black Canyon trail 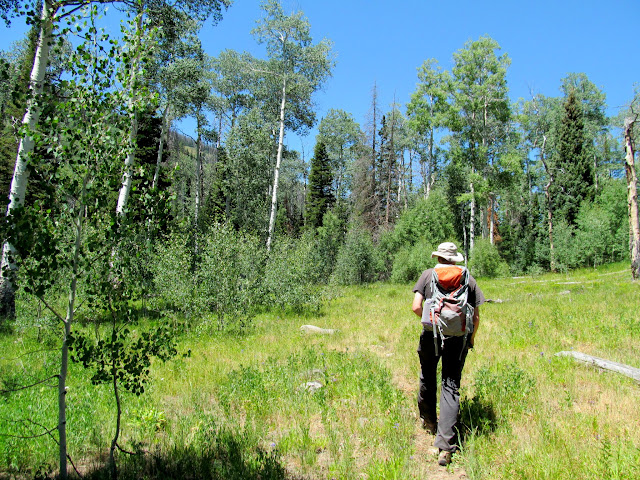 Cooling off in Joe’s Valley Reservoir 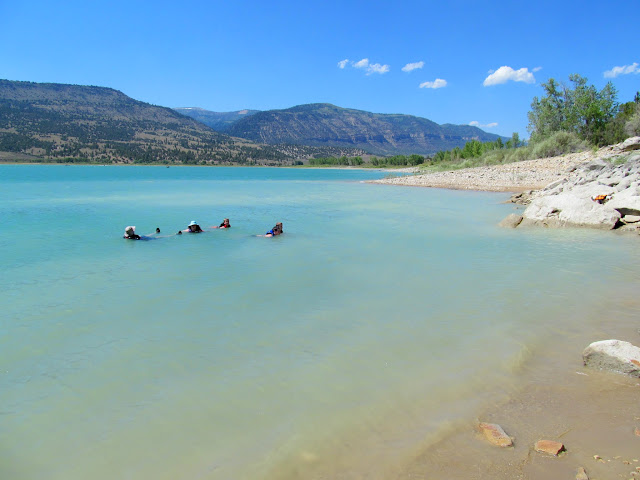 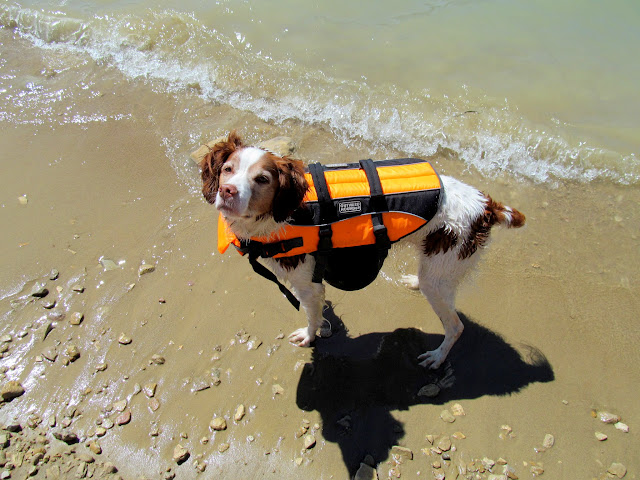 After breakfast on Sunday morning we packed up camp and headed toward home, but with a longer stop at the reservoir for lunch and a swim. I took the dogs for a hike in the cliffs above the reservoir to inspect an alcove that’s caught my eye a few times while driving past. It was a short but gnarly bushwhack as I scrambled up directly from below. There was nothing terribly interesting in the alcove–just some recent names written in charcoal. I returned to the water where everyone else was swimming and playing on the shore, and the dogs and I joined them first for a soak in the cold, cold water and then a soak in the warm sun before heading home.

Truck and trailer parked near the reservoir 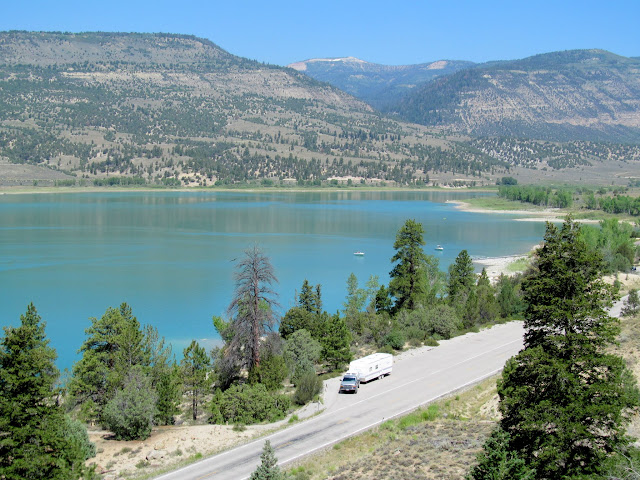 Inside an alcove above Joe’s Valley

Boulder lying in the rocks 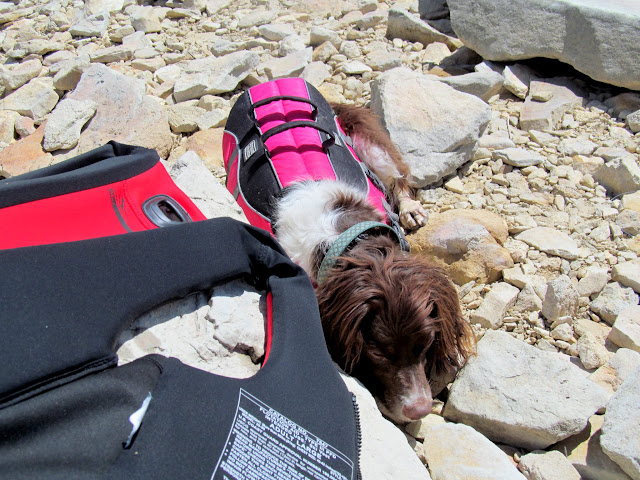