The heat in the valleys drove the kids and I into the higher elevations of the Wasatch Plateau this past weekend, where we drove a loop up Highway 29 to Joe’s Valley, using Lowry Water Road and Miller Flat Road to connect to Highway 31 to bring us back home. Along the way we found some rock art, skipped stones into some reservoirs, and enjoyed a fun hike to a waterfall.
A few years ago I found some rock art in Joe’s Valley and I figured there must be more along Straight Canyon below the reservoir. As we ascended the canyon I stopped the Jeep many times to scan the cliffs with binoculars. Michael and Bradley, of course, were bored by our slow progress. When I eventually spotted some pictographs they were happy to get out of the vehicle and scramble up to the rock art. The pictographs were not particularly great–in fact, they were somewhat abstract, lacking specific human or animal figures. One circle made of overlapping handprints was interesting, however. 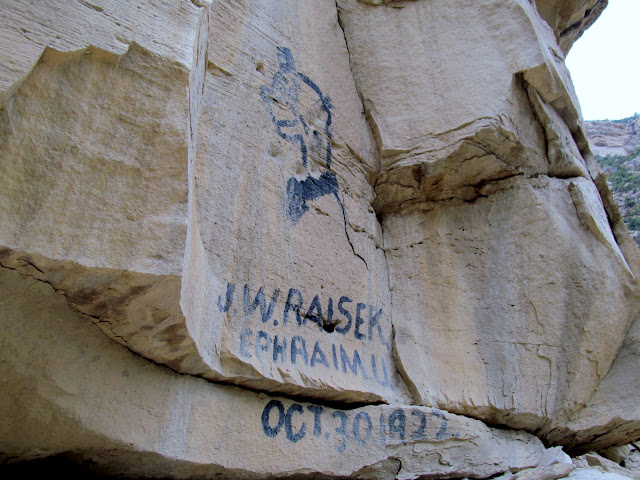 Circle made of handprints 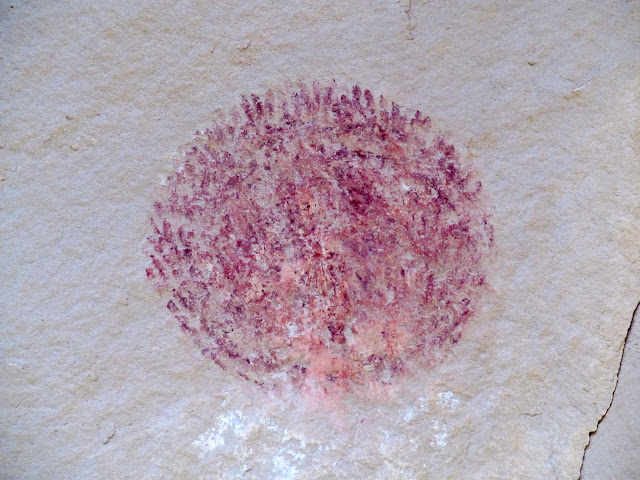 Checking the cliffs for rock art 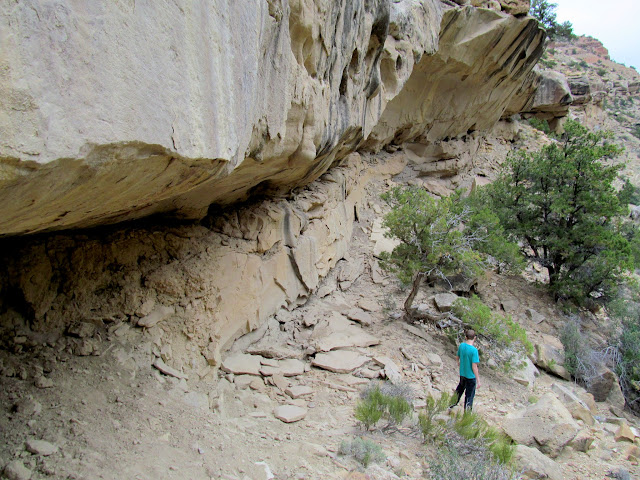 We reached Joe’s Valley Reservoir and stopped to throw some rocks into the water. Bradley tossed a beer bottle that he found on the shore into the water, and the kids had entirely too much fun trying to hit it with rocks as it floated beyond the shore. The dogs swam for a bit and seemed to enjoy exploring the boulders along the shore. Continuing north we took the Lowry Water Road to Mill Canyon. While planning this trip I’d spotted a waterfall there in Google Earth and decided it might make for a nice hike. The road up Mill Canyon was rocky at first, then overgrown. A tree fallen across the road stopped our progress less than a mile from the waterfall. 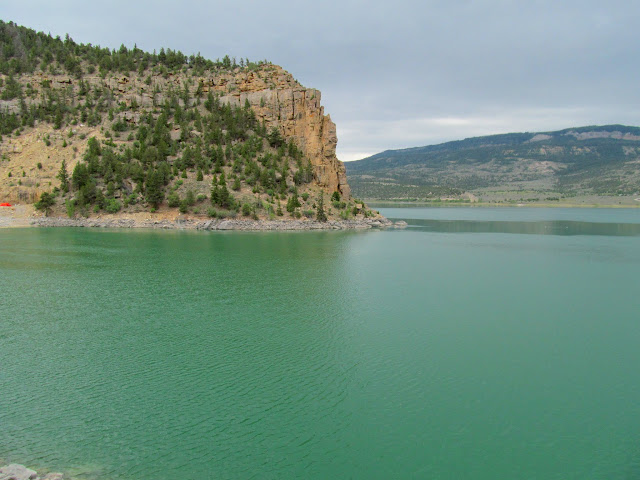 The boys skipping rocks and dogs exploring the shoreline 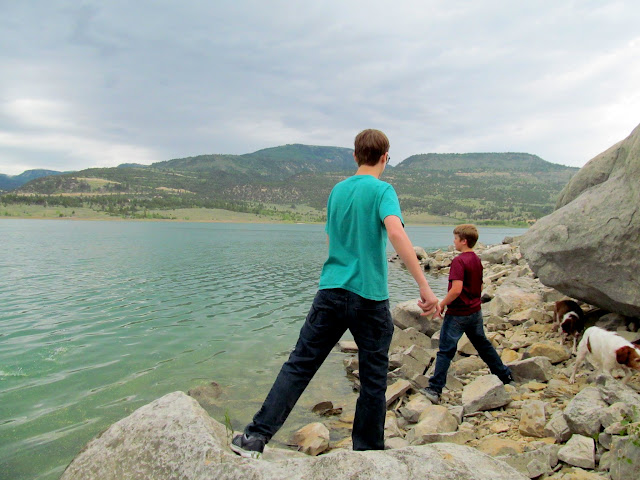 Torrey’s not very good at playing fetch in the water 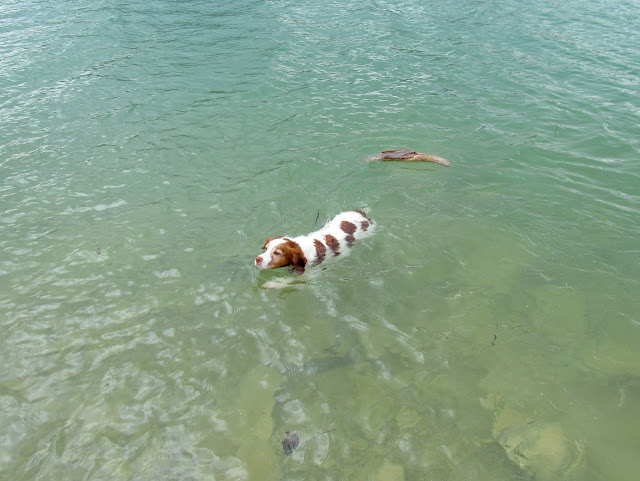 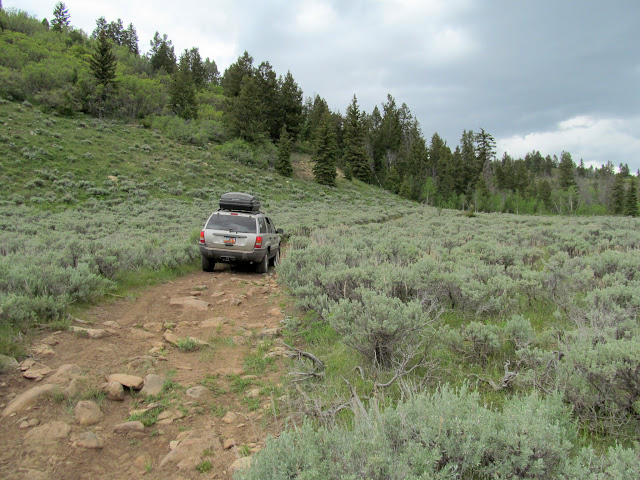 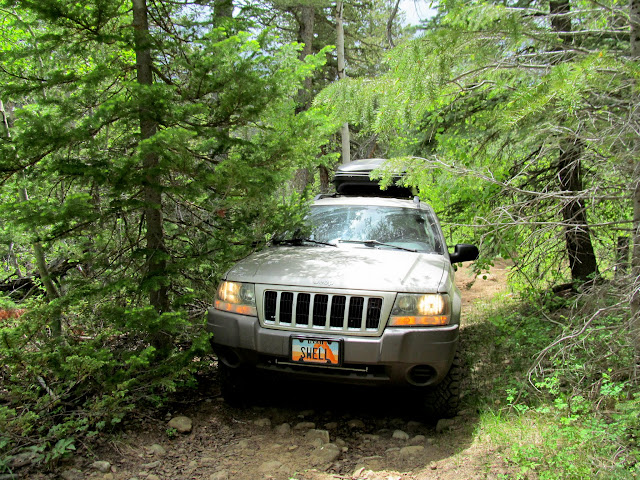 We shouldered our packs and walked up the road, encountering many more fallen trees, until reaching the legal end of the motorized route. I wasn’t sure what to expect beyond this point because no road is visible in the satellite imagery. There was, however, an old road that continued up the canyon but it was heavily overgrown and littered with fallen trees. We alternated between walking easy stretches of road and climbing over/under/around dense thickets of downed timber. The first time we crossed the creek it was easy and our feet stayed dry. At the second crossing there was a wooden plank across the stream but it had a split on the bottom side near the center. I very carefully walked out onto the plank and it held up under my 215-pound bulk, so the kids and dogs followed. The third and final stream crossing gave us some problems. An old bridge spanned the creek but water was flowing over it and the logs were extremely slippery. After taking one step onto the logs I dared not continue across–a slip could have been painful at the least, if not injurious. I almost admitted defeat, but the waterfall should have been just out of sight around the next bend in the canyon. I decided that we’d try dumping large rocks into the gaps between the logs, hoping to provide a stable footing surface, but that didn’t go as planned–the rocks shifted under my weight and were only marginally better than the slippery logs. Next we dragged some dead trees and laid them across the logs and rocks, and that seemed to do the trick! I tried our improvised crossing first and made it across easily with the help of a tree branch as a walking stick. The kids followed and we all managed to keep our feet mostly dry. A short while later we could see the waterfall, but the drainage had become narrow and steep and filled with downed trees. It didn’t look easy to get closer to the falls so we enjoyed our view from a slight distance before turning back. We all felt accomplished at having made it as far as we did.

Hiking up the old road in Mill Canyon 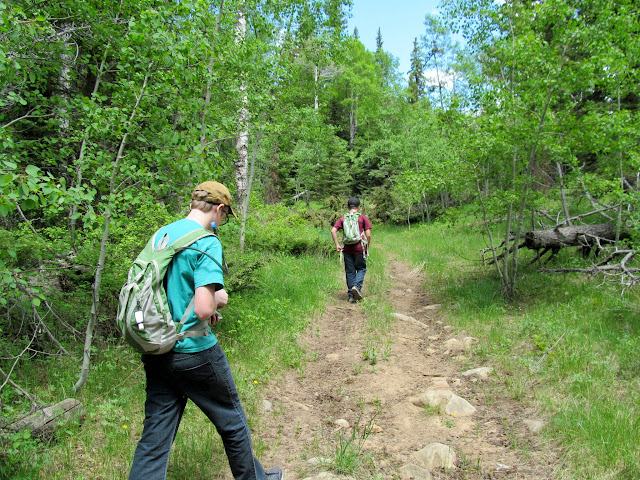 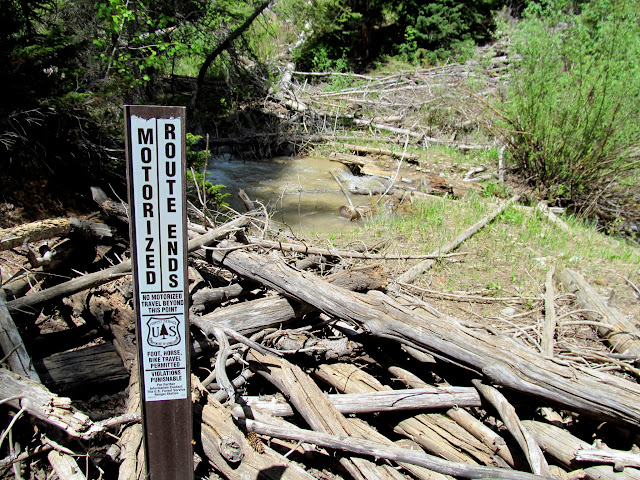 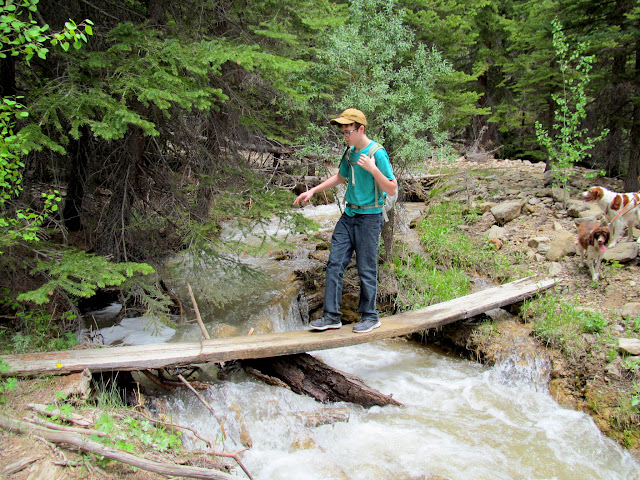 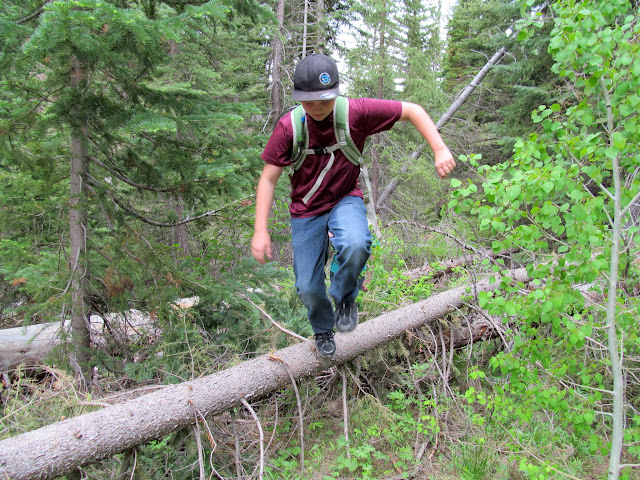 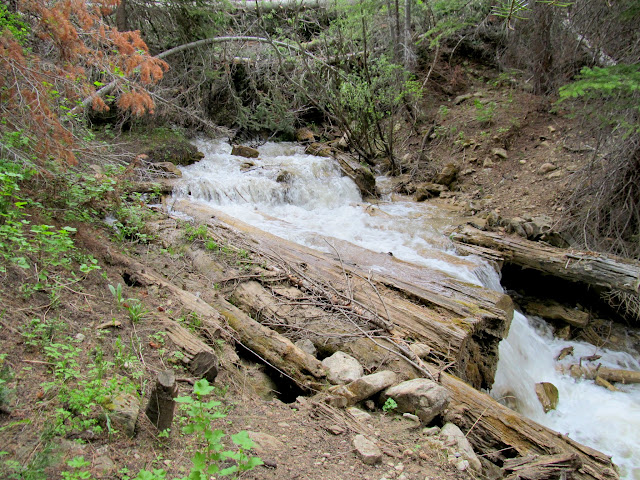 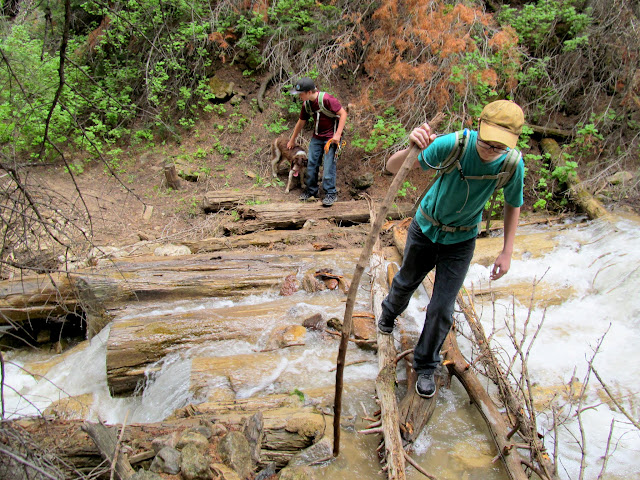 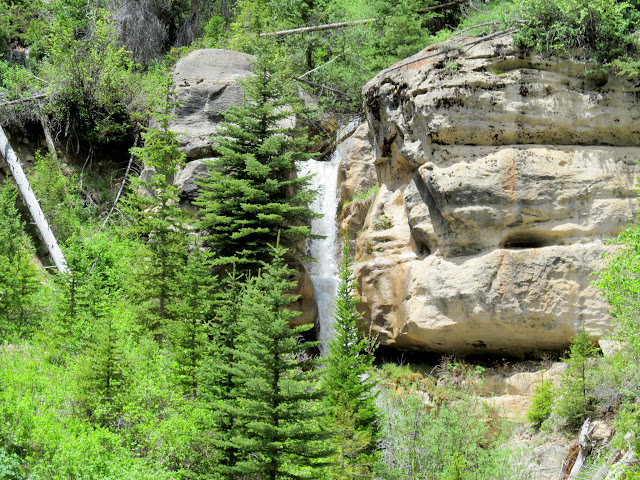 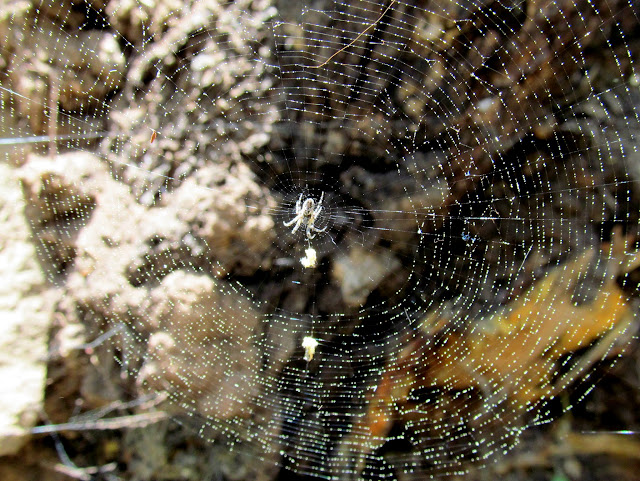 The hike back down the canyon was quick and easy since we’d already conquered all the obstacles once. We reached the Jeep and drove back to Lowry Water Road, where I had a decision to make. The road to the north is notoriously boggy but would meet up with good roads in less than three miles. Or, I could retrace the road to the south and connect with Miller Flat Road, which would be a 13-mile detour but with good roads the entire distance. I opted to turn north since I could see rain to the south. The road was worse than I expected–entirely 4-LOW terrain. It was generally rocky, with fallen trees and mud bogs to deal with. I was anxious for the entire three miles, hoping an obstacle wouldn’t turn us back and force a re-run of everything we’d just driven through. Relief came when we made it to the nice gravel road near Potter’s Ponds. We ate a late lunch at the campground and then hit Miller Flat Road for the rest of the drive north toward pavement. I stopped a few times for some photos and to let the kids and dogs enjoy a brief stop at Miller Flat Reservoir. 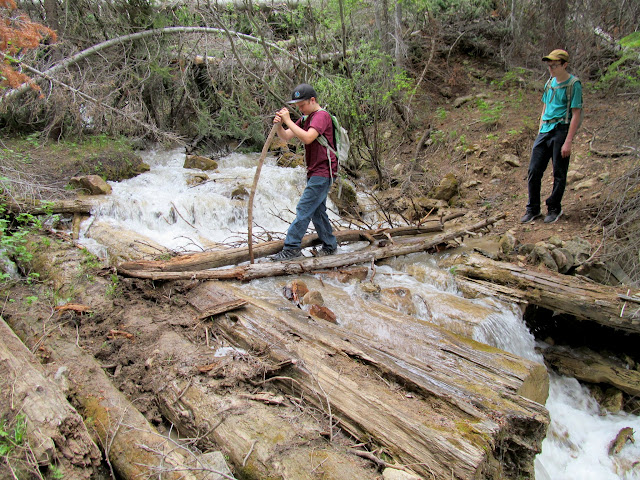 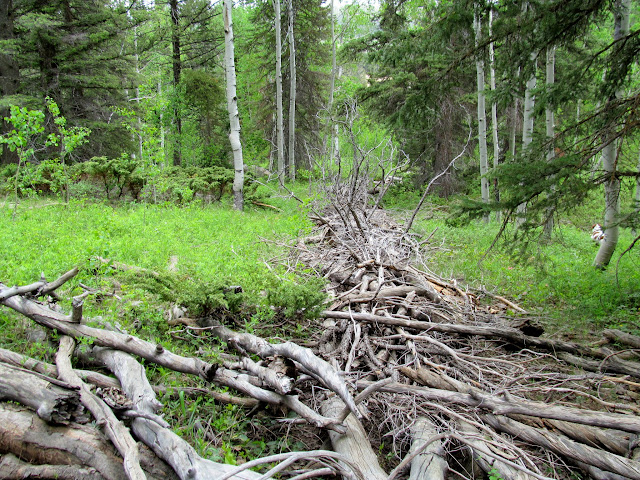 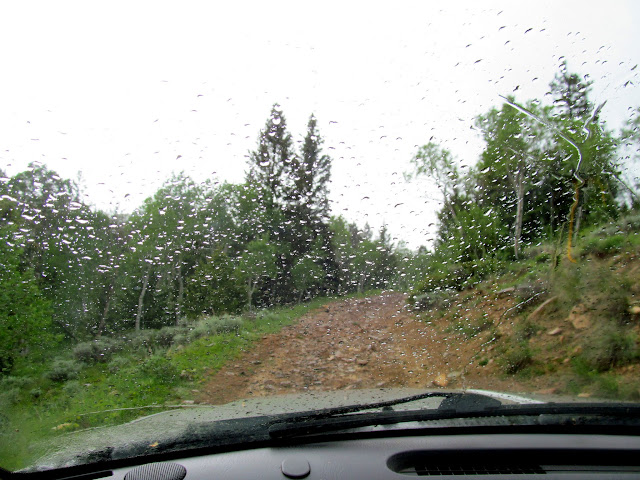 Rain to the south in Joe’s Valley 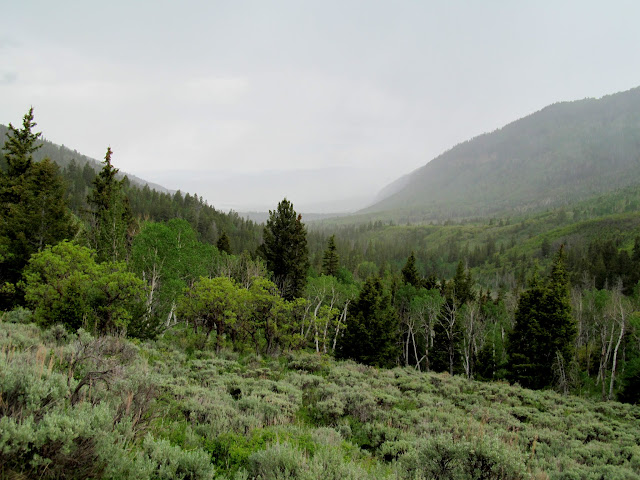 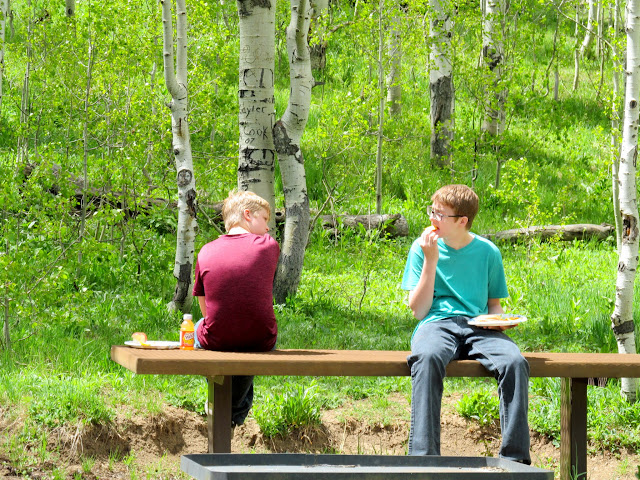 Washing the Jeep at a stream crossing 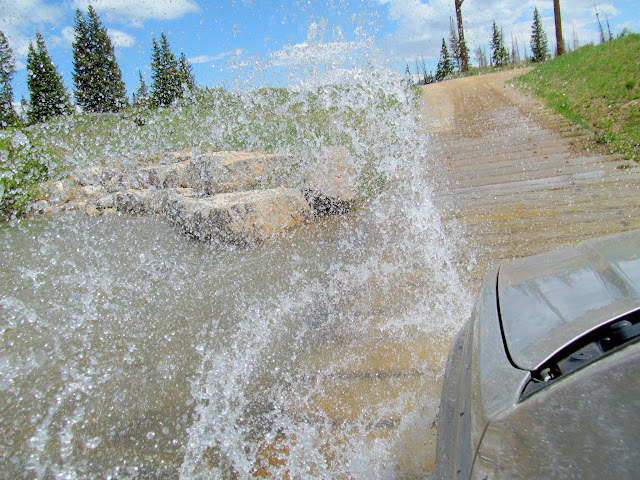 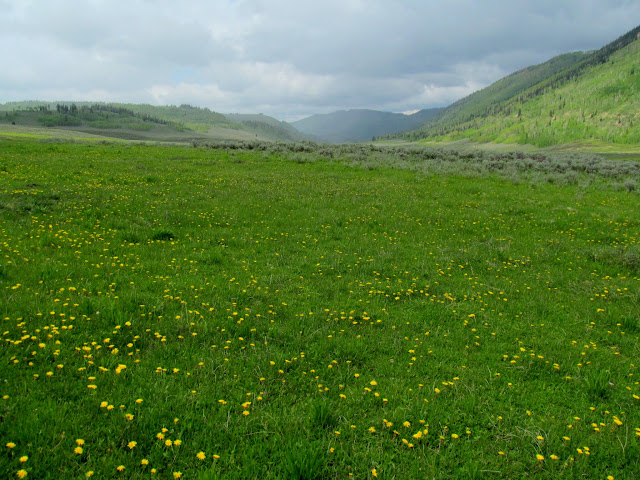 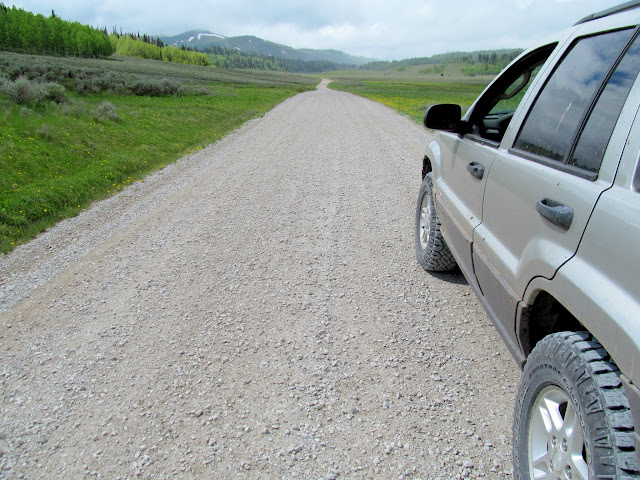 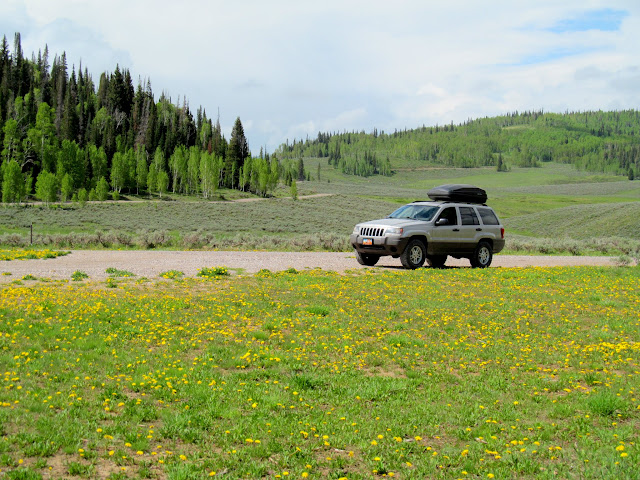 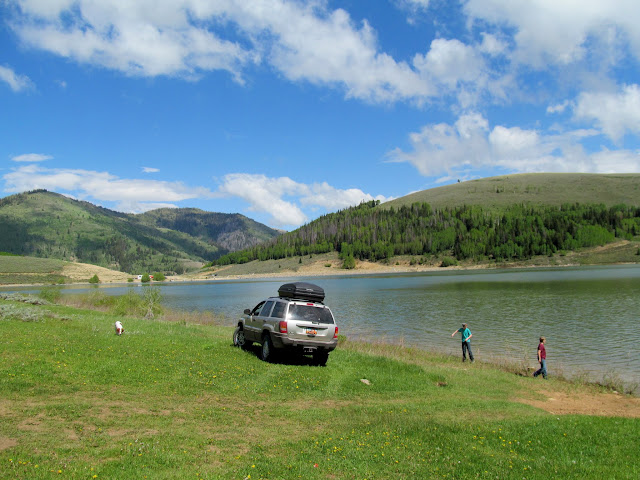 We hit Highway 31 and began the descent through Huntington Canyon. At one particularly flat stretch of Huntington Creek we stopped and just watched the fish swim up and down the waterway. I wanted to take a short side trip up Nuck Woodward Canyon to check out a road closure. The Forest Service temporarily closed six miles of the canyon due to flooding a few years ago that washed away part of the road surface, and now they are proposing to close the road permanently to all motor vehicles. Another day I’ll have to return with a mountain bike to check out the supposed damage. Near the bottom of Huntington Canyon we stopped one last time to photograph some inscriptions I spotted at Birch Spring. It appeared as if an entire wall had been covered with inscriptions but almost all of them have weathered away. I didn’t climb up to get a closer look but I made a mental note to do so some other time. In fact, Huntington Canyon seems a good place for a rock art hunt similar to what I’d done earlier in Straight Canyon. 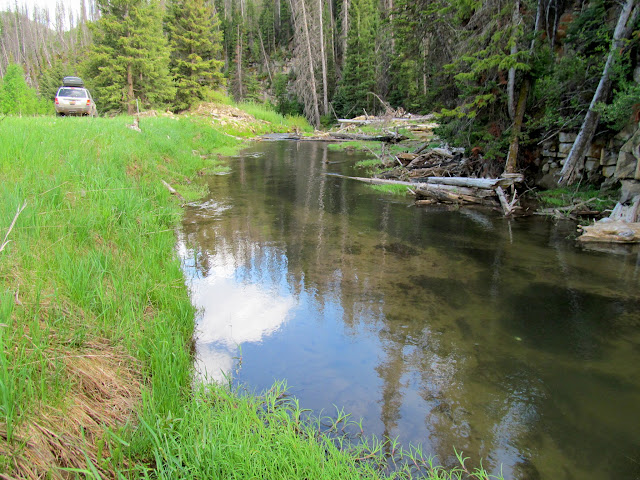 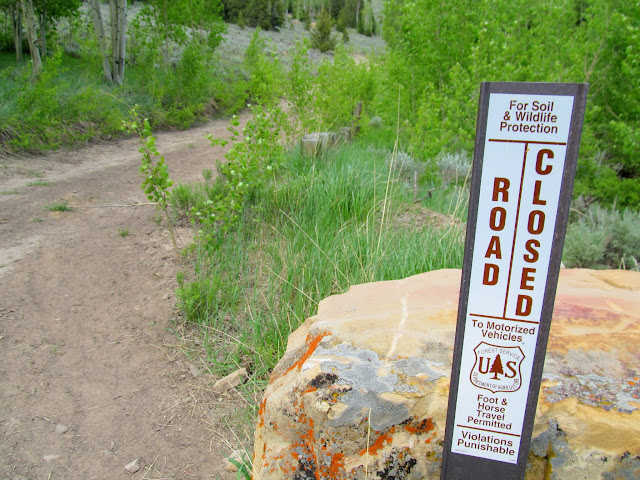 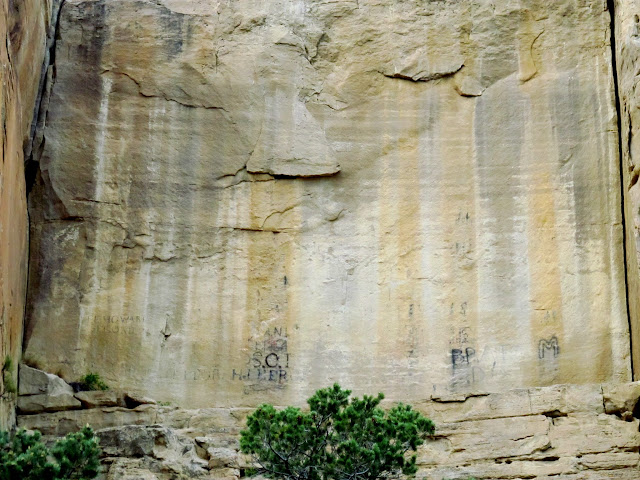