My family and I spent Father’s Day weekend at Potter’s Ponds and invited some friends to camp with us. I took half a day off work on Friday so we could arrive early. After setting up camp, Tom and Jim arrived and we, along with my niece Ashley, hiked to the oldest geocache in Utah, which was also Tom’s 4,000th cache find–and on the six-month anniversary since his liver transplant. We had to walk across a fallen tree to cross the creek and step over a few other fallen trees along the way, but slowly and steadily we made our way to and back from the geocache. Chris, Karin, and Randy arrived and we all spent the evening around the campfire. Terry and Karen and family rounded out our group, but they stayed in a different campsite so we didn’t get to hang out nearly enough. 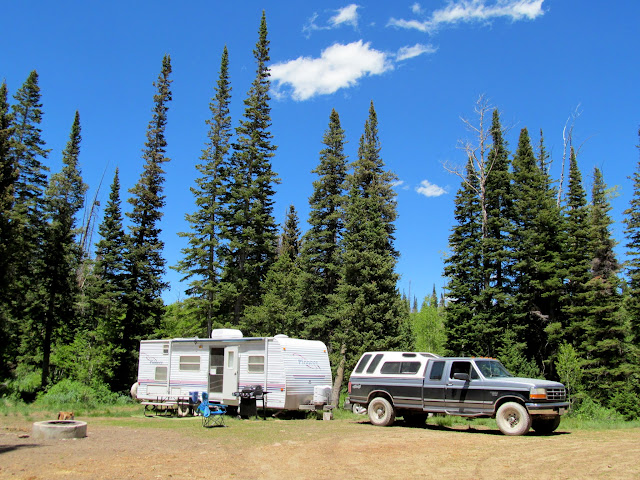 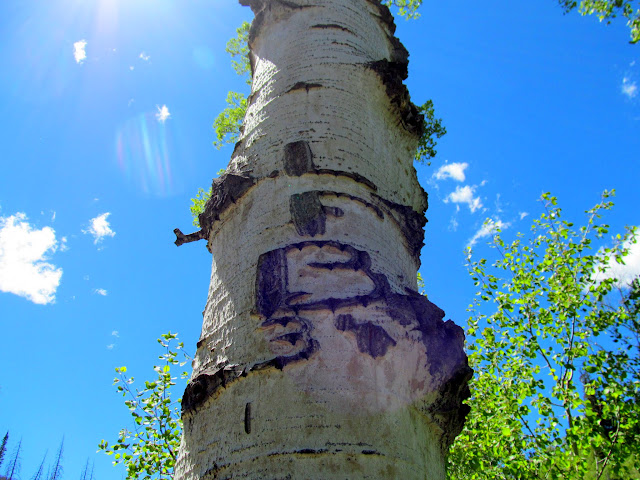 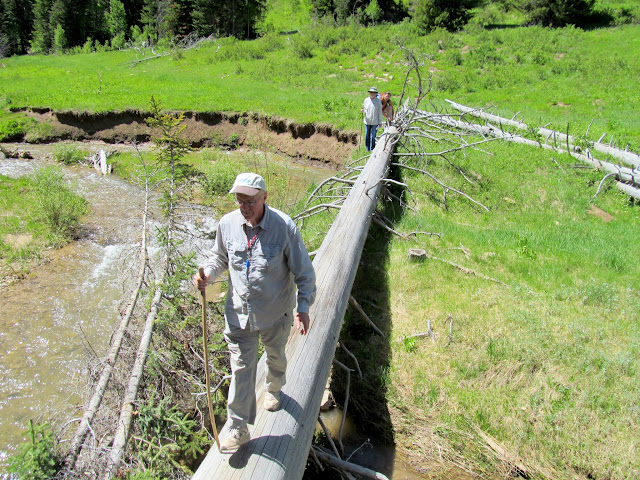 Tom at the oldest geocache in Utah, also his 4,000th find 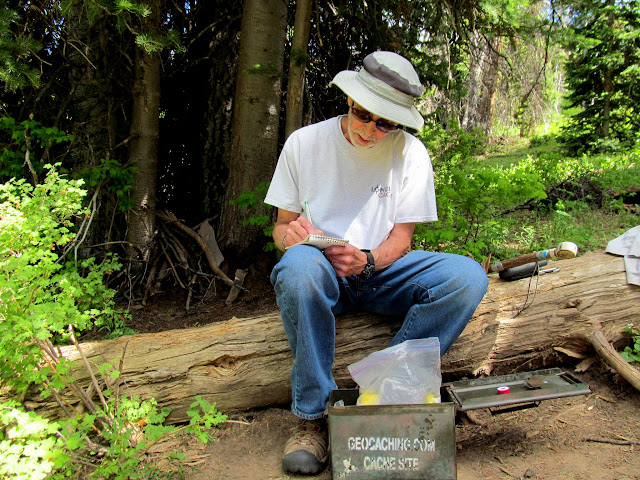 A field of buttercups 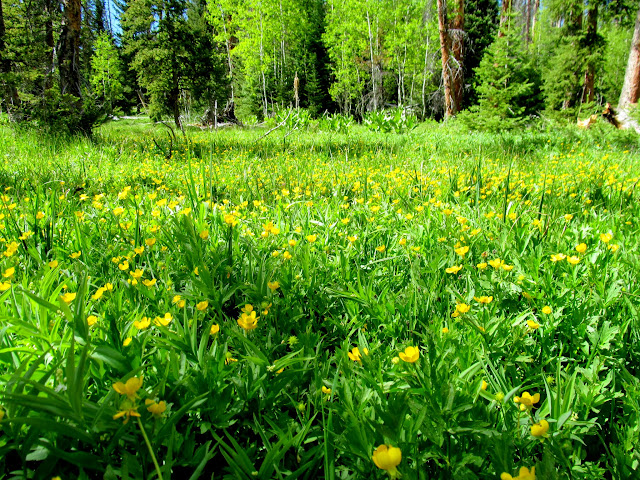 Torrey and Boulder in the creek 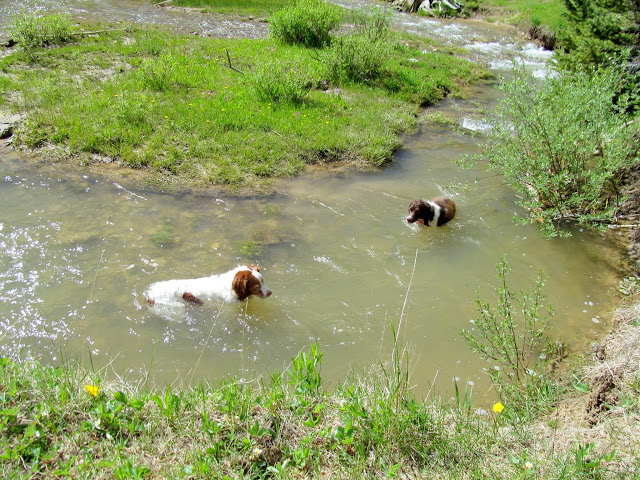 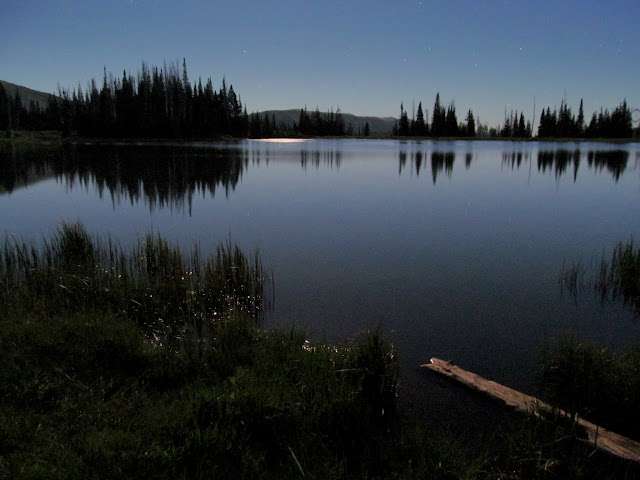 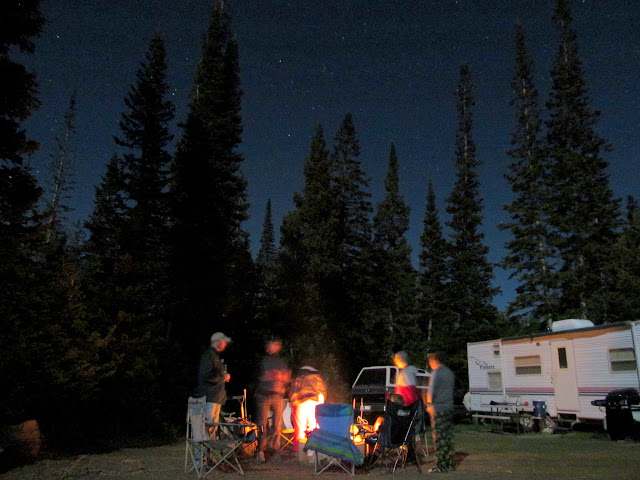 On Saturday morning Chris and I set out for a hike up Bulger Canyon. While planning this trip I’d noticed an old road in Bulger Canyon that appeared as though it might hook up with the logging road road the kids and I had hiked the previous weekend in Mill Canyon. While we didn’t end up connecting the two routes on this trip, we did find the site of an old sawmill in Bulger Canyon. Some carvings in aspen trees along the old logging road dated to 1920, which I assume is when the road was built. Near the sawmill was a huge pile of discarded lumber. I had noticed it in Google Earth but didn’t recognize it for what it was until we arrived to see it in person. We followed a couple of forks in the logging roads but didn’t travel along them very far. There’s definitely some more exploring to do in the area. 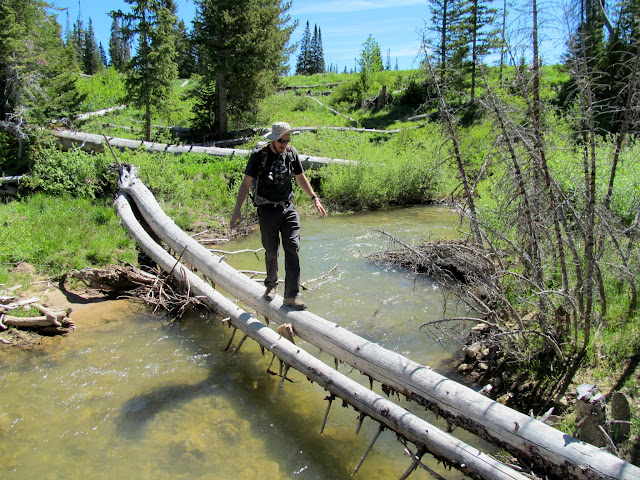 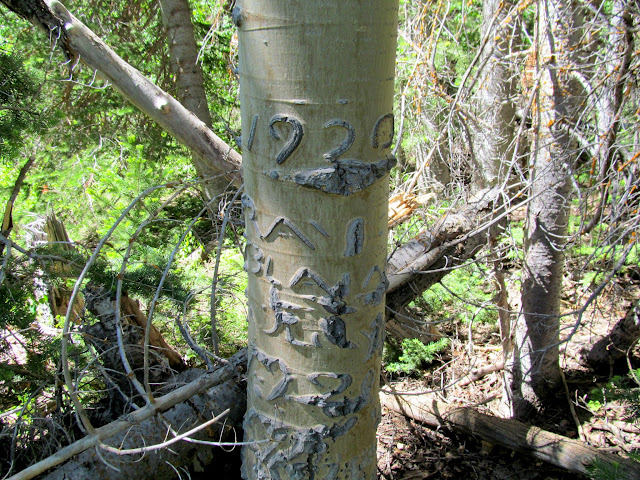 Trail as it enters Bulger Canyon 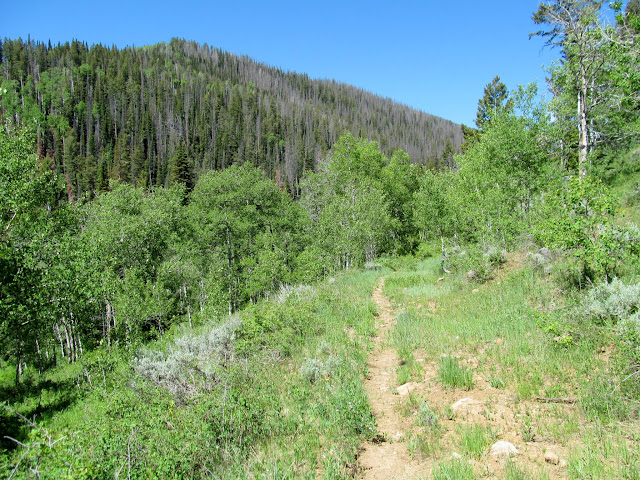 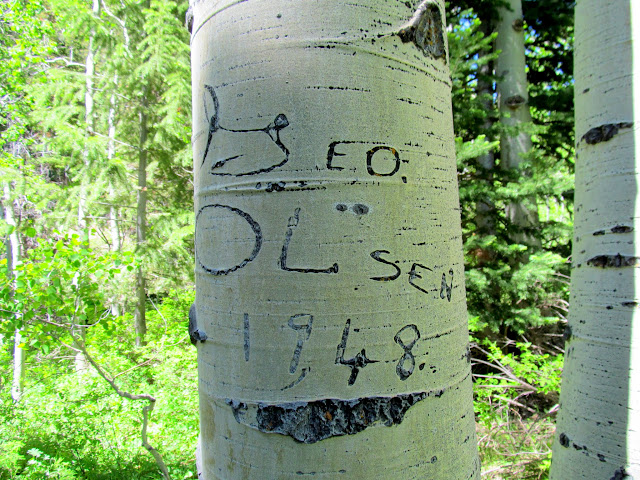 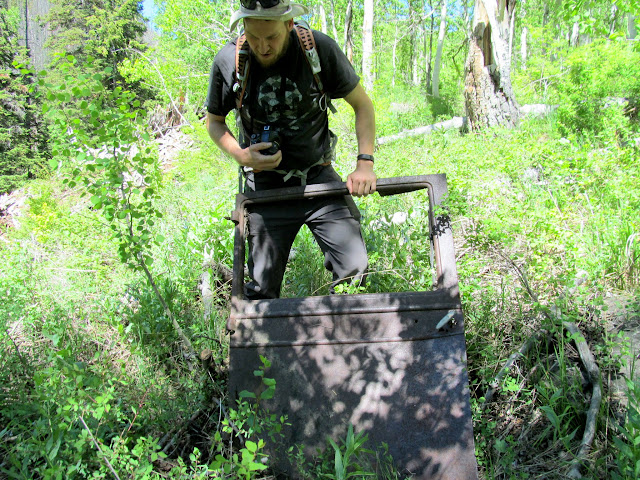 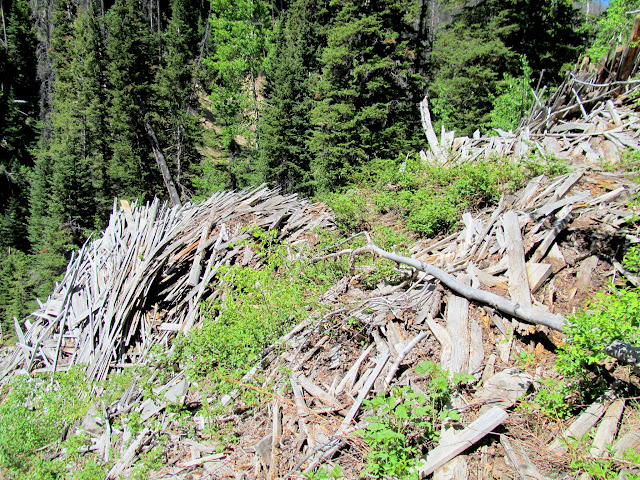 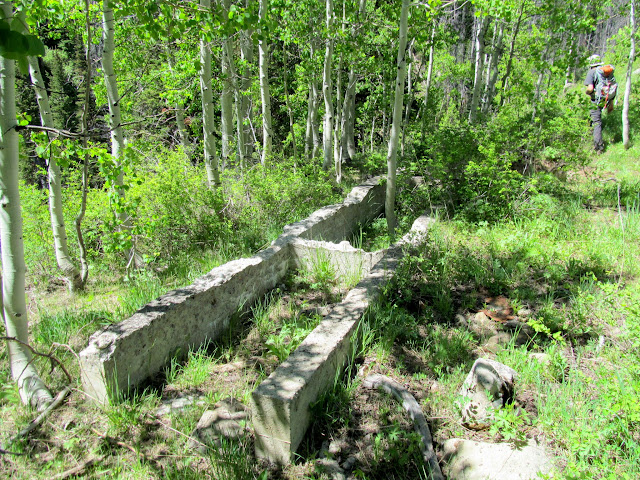 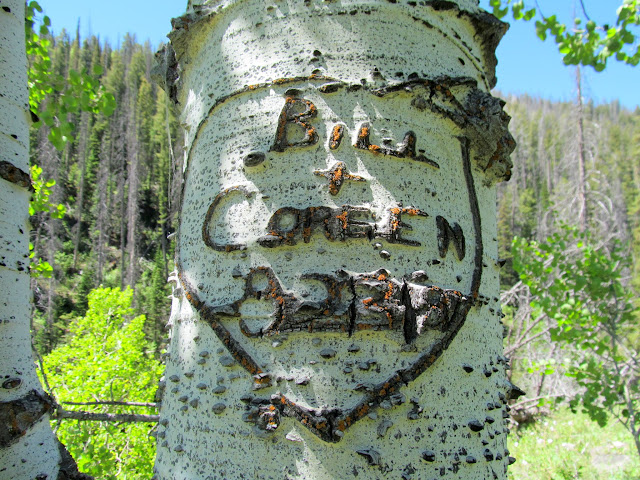 Crossing the creek in Bulger Canyon 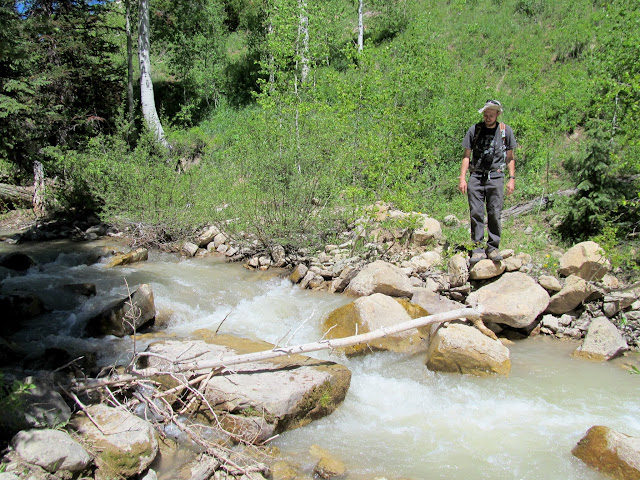 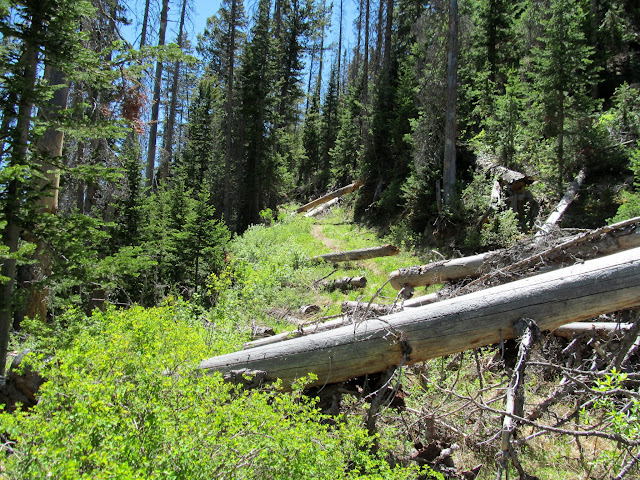 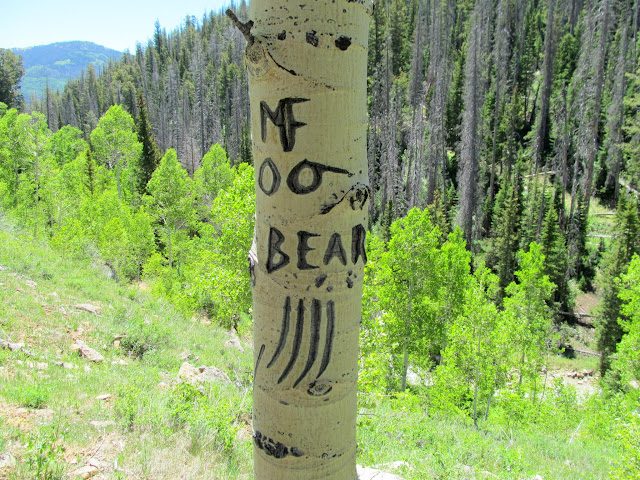 Walking an overgrown fork in the road 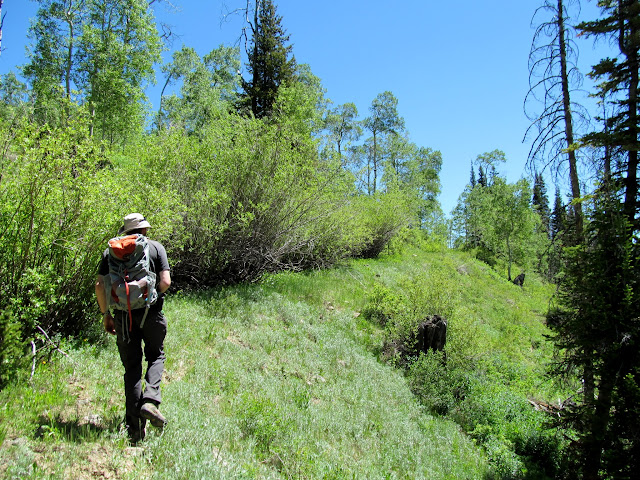 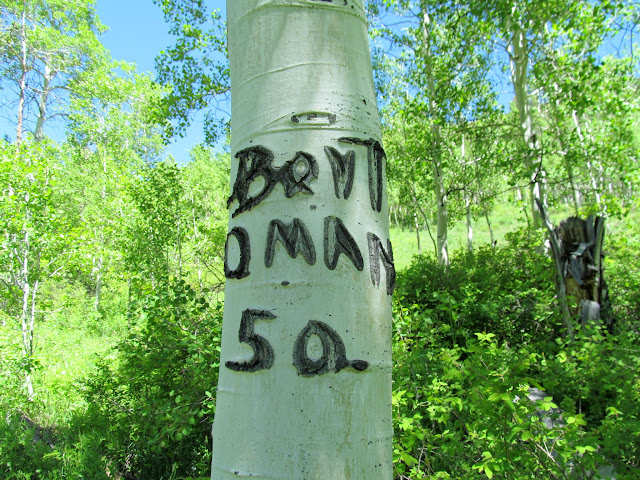 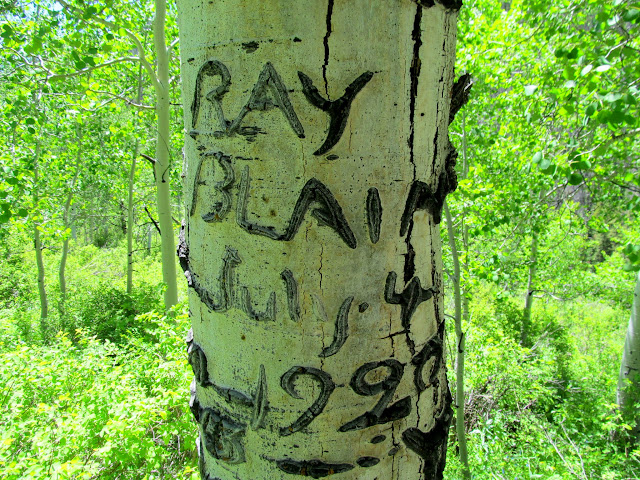 It was a relaxing afternoon and evening at camp. We drove to Terry and Karen’s campsite and visited for a while, then returned to our site and roasted marshmallows for s’mores. The following day we just slowly broke down camp before heading home. I was wishing I’d planned another hike, but with a 1PM checkout time we had to vacate the campsite too early to make much use of the day. Although the temps in the upper 70s at camp had felt warm, the 95 degrees at home felt like an oven and left me wishing I was back in the mosquito-infested mountains.

Bradley and Michael lying in hammocks and playing cards 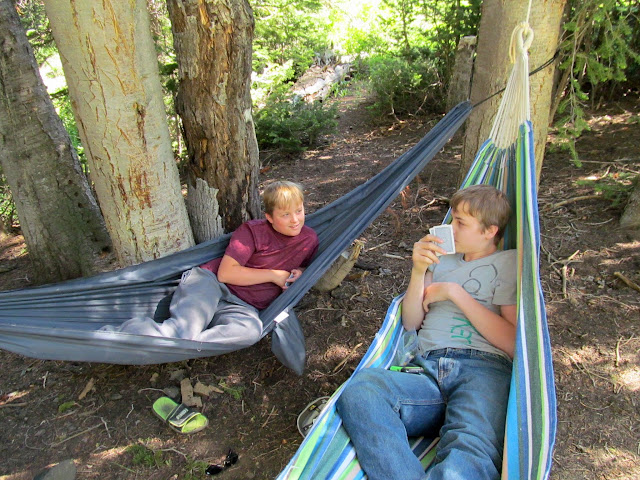 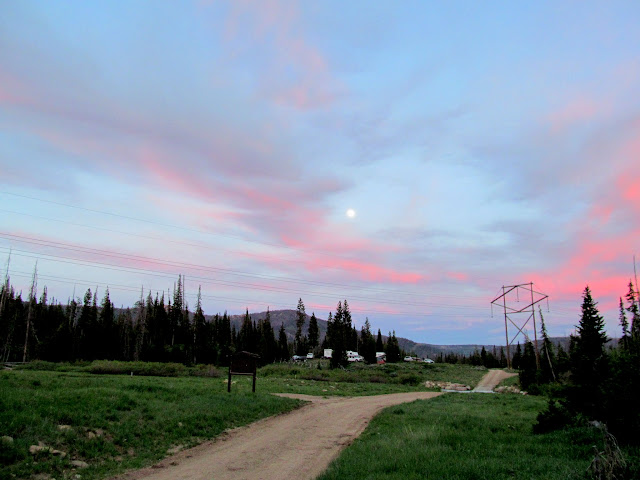