Fool Creek Peak, the highest point in the Canyon Mountains at 9,712′, is certainly low compared to many Utah high points, but its prominence above the surrounding valleys puts it at #20 on Utah’s list of prominent peaks. While using Yuba State Park as a basecamp, I set out early on Friday morning to hike Fool Creek Peak. I hadn’t researched it much except enough to know there was a five-year-old geocache at the summit that had only a single find. This area of the state was entirely new to me, and I had to use my phone to navigate to the starting point of the hike. After a two hour drive from camp I arrived at the trailhead, which is actually the end of full-sized vehicle travel. I began hiking north along a trail that was restricted to 50″ vehicles and, after about two-thirds of a mile, I found myself on a faint hiking trail. A fire ripped through the area in 2012 and left blackened scrub oak in the lower elevations and burned pines and aspens up high. The early portion of the hike was entirely through tall, burned oak brush with a short but dense covering of smaller plants beginning the recovery process.

Early morning sun on the cliffs of Oak Creek Canyon 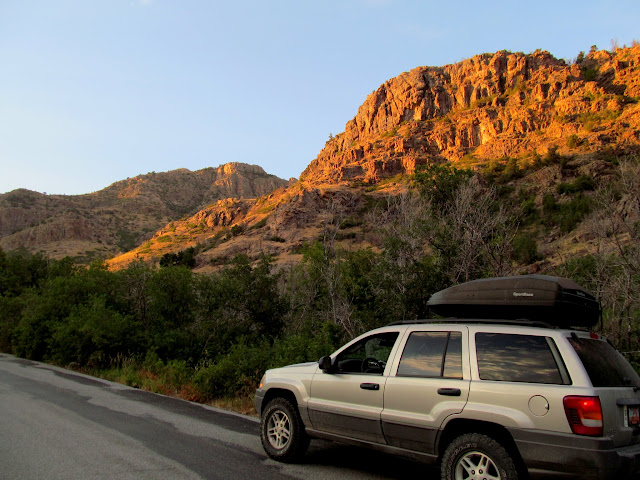 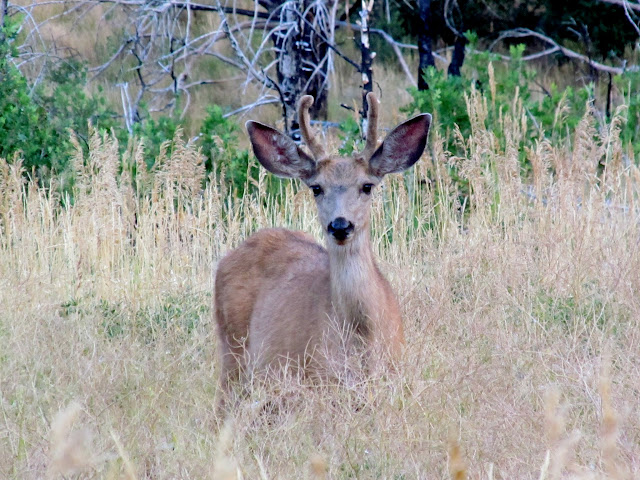 North Walker Canyon at the beginning of the hike 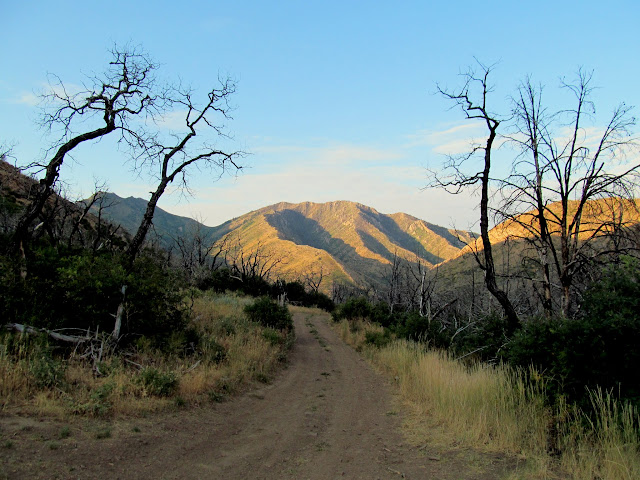 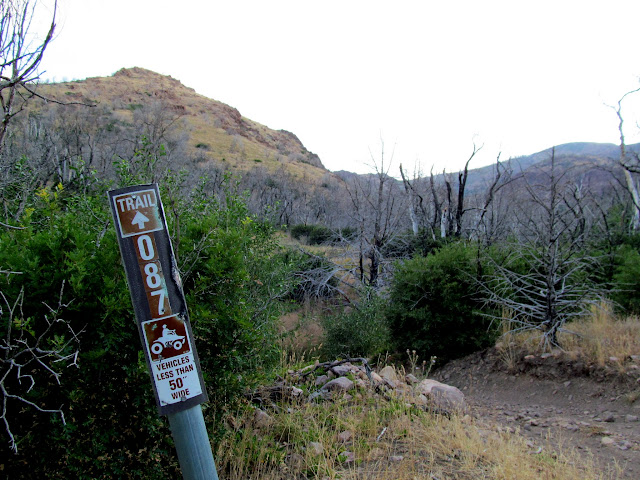 I SO wished I could have ridden this Husaberg to the end of motorized travel! 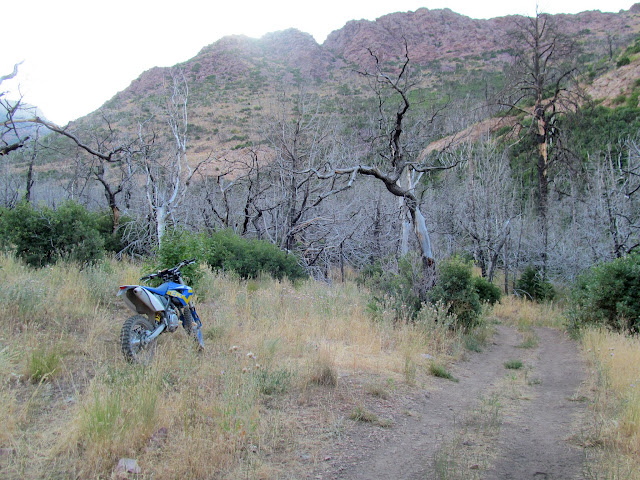 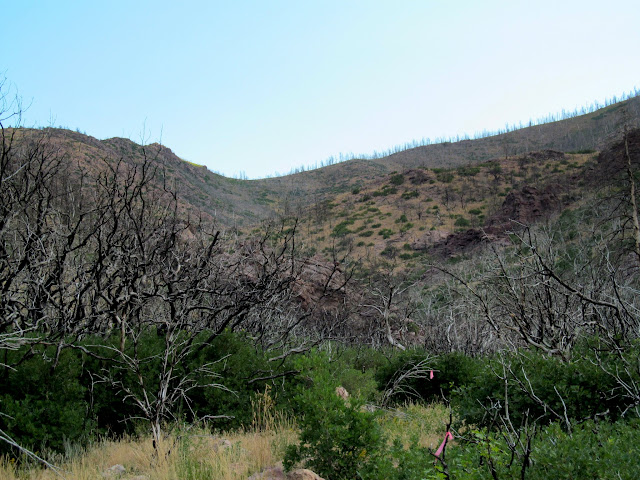 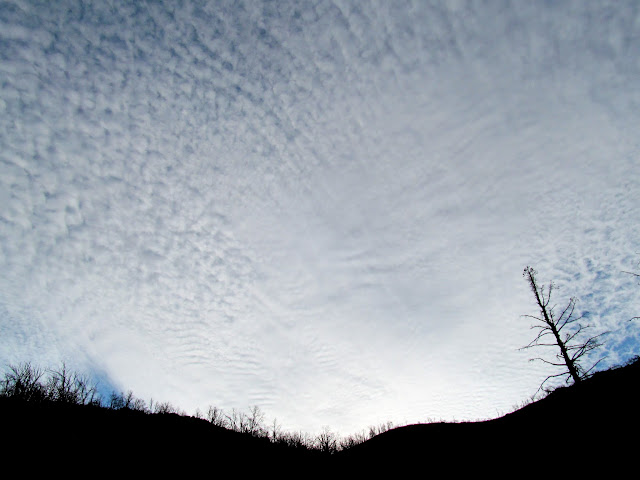 The trail left the watercourse and steepened, climbing sharply up to the ridge dividing North Walker Canyon from Buck Hollow. I’d been following what I thought were fresh horse tracks, but near the top of the divide I encountered an older couple leading two mules down a steep section of trail. They were friendly, as were their three beautiful border collies that made me feel guilty for leaving Torrey and Boulder back at camp. The couple must have just gone to the saddle and back down, as their tracks didn’t continue up toward Fool Creek Peak. At the ridge the trail turned east and made an easier ascent toward the peak. I entered what used to be a thick pine and aspen forest. All that existed now were patches of young and dense quakies among the standing dead trees, which made the trail difficult to follow. 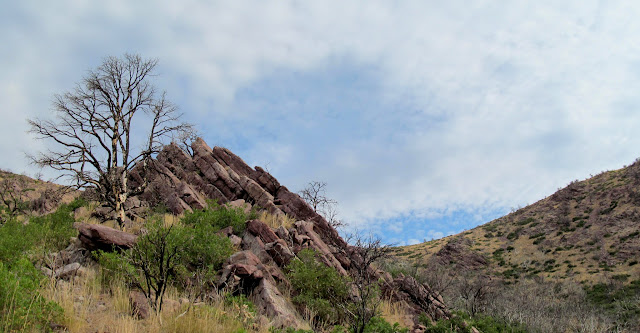 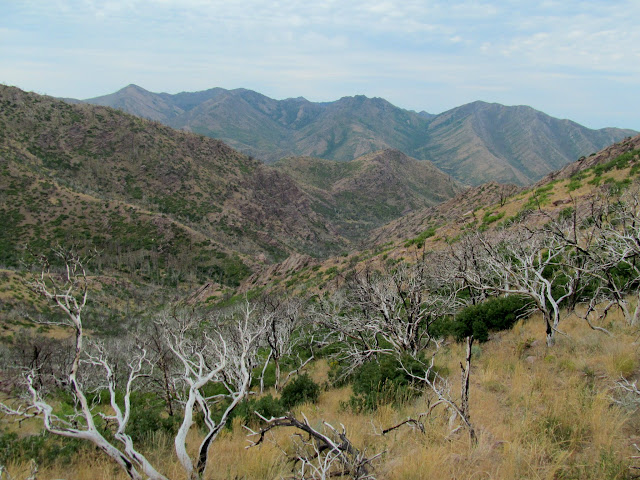 A couple and their mules 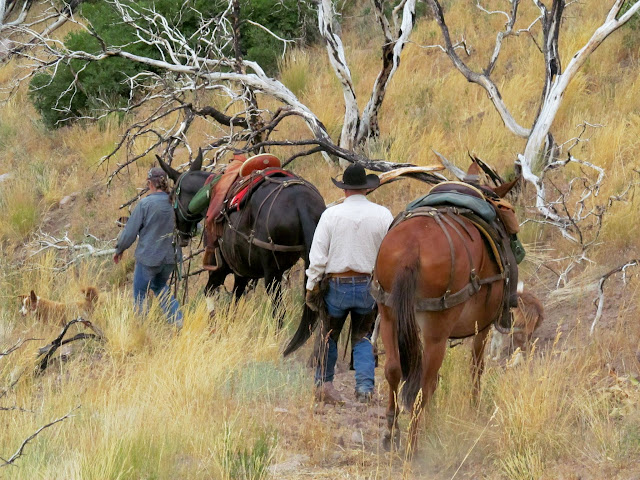 At the divide, looking north into Buck Hollow 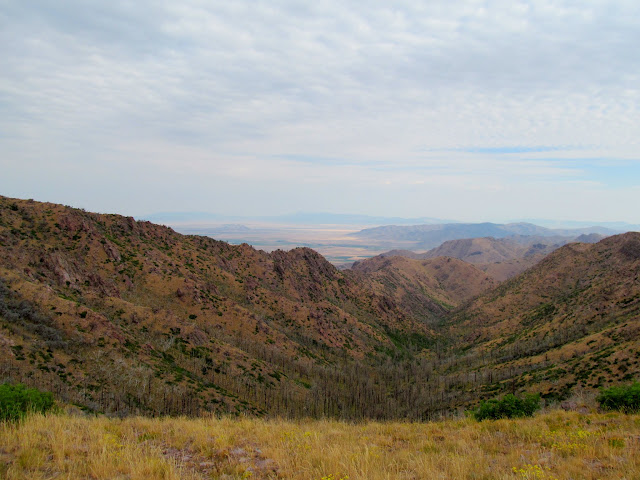 Trail up the ridge toward Fool Creek Peak 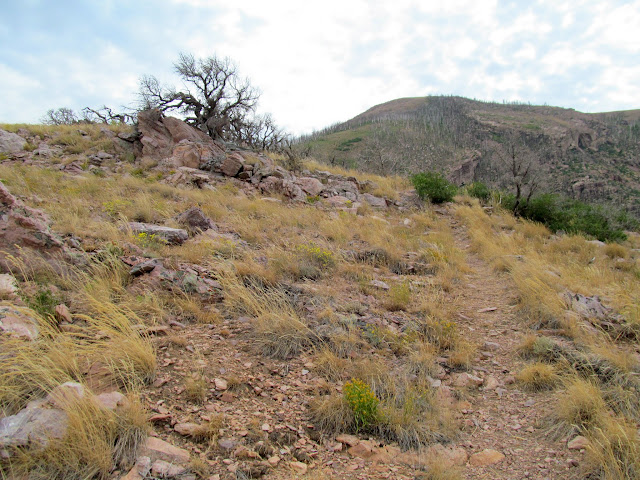 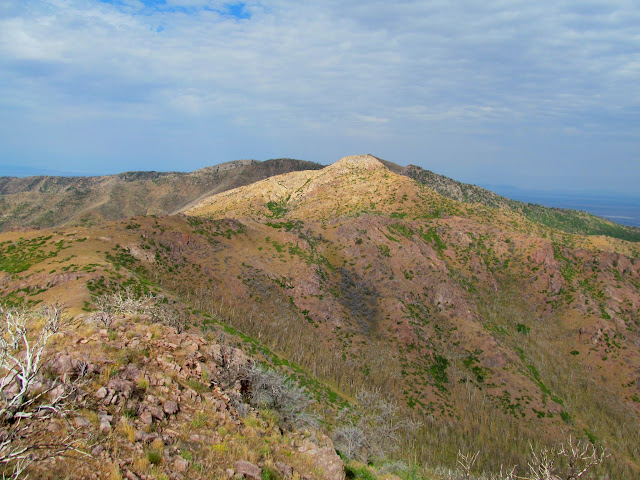 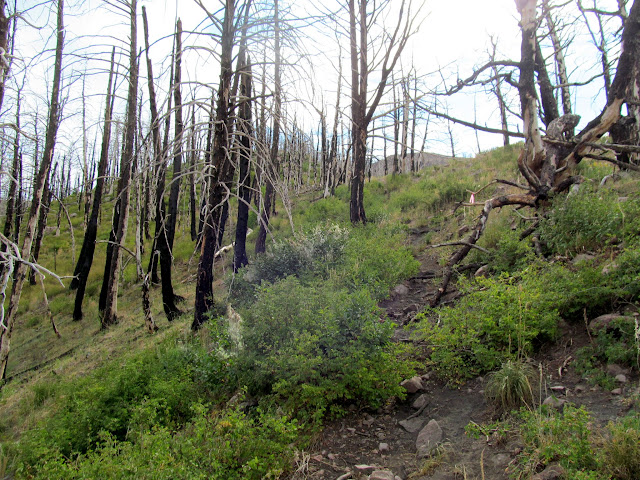 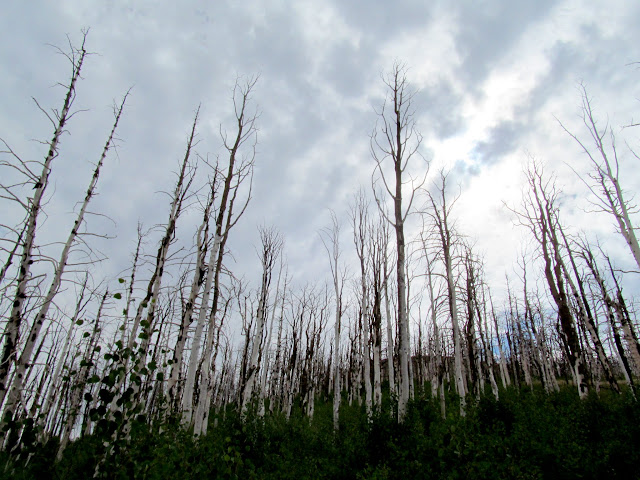 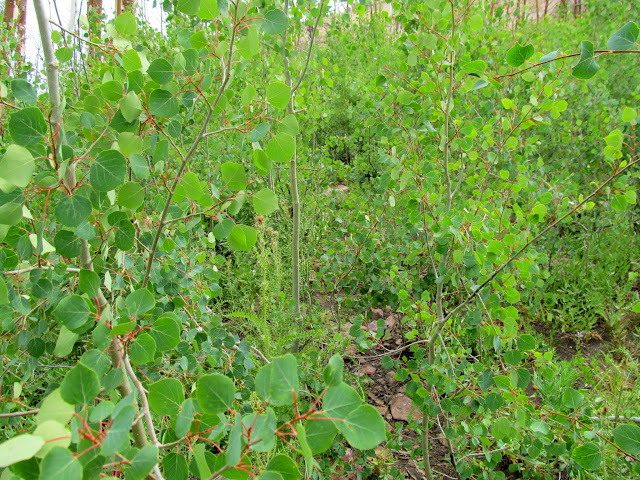 Above the treeline the trail became easy to discern but rocky and steep. Just before reaching the summit I noticed a few level spots, shored up by rock walls, that apparently used to be tent pads for those tending to the heliograph station at the summit. The views were hazy from up top. I could make out Yuba State Park to the east where my family was camped, along with several small towns and other landmarks surrounding the mountain range. I ate a hasty lunch under the summit structure and then steeled myself to find the geocache that promised a difficult retrieval. Standing at the edge of the cliff just above the geocache, I cockily thought to myself, “This should be easy.” Then I climbed down and realized I had to make a sketchy move to reach the container. “Oh.” After what seemed like a long while searching out handholds and stable footing, I retrieved the geocache and retreated to a safe spot to sign the log. Returning the cache to its hiding spot was much easier–a quick toss and it was (kind of) back where I found it! 😉

Rocky trail above the treeline 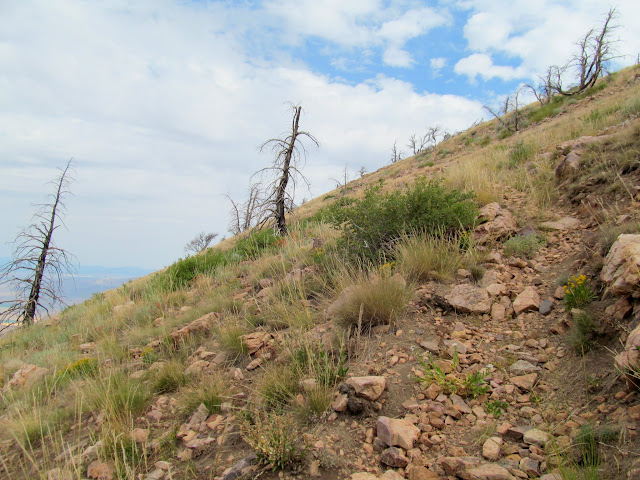 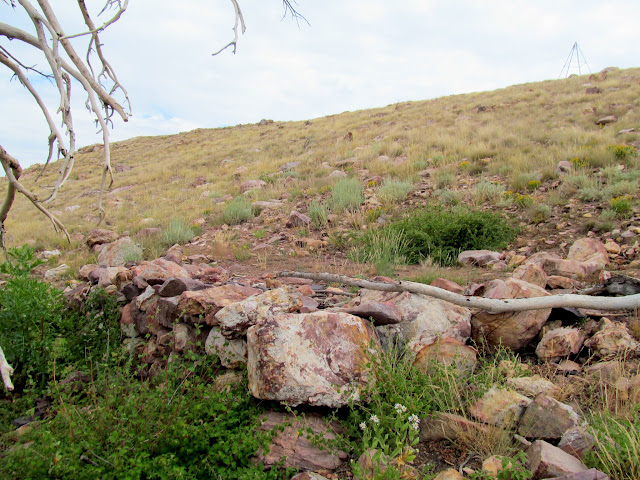 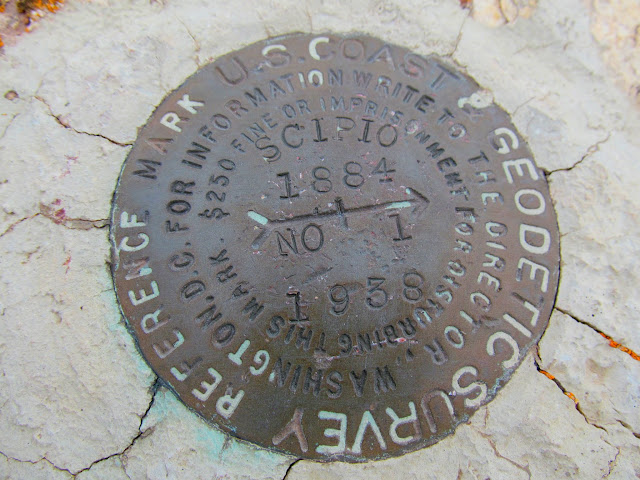 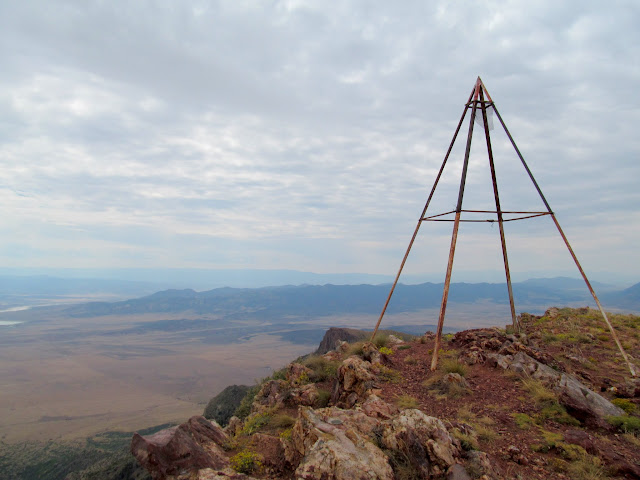 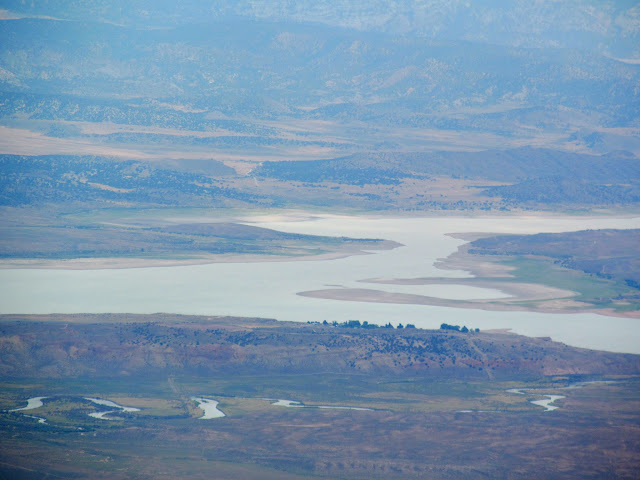 Just below the edge of the summit 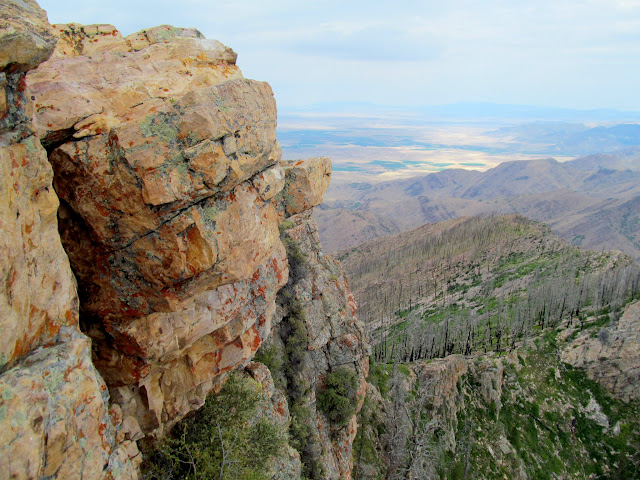 Geocache, “A Fool’s Errand” (GC34PTM), with my find being only the second in five years 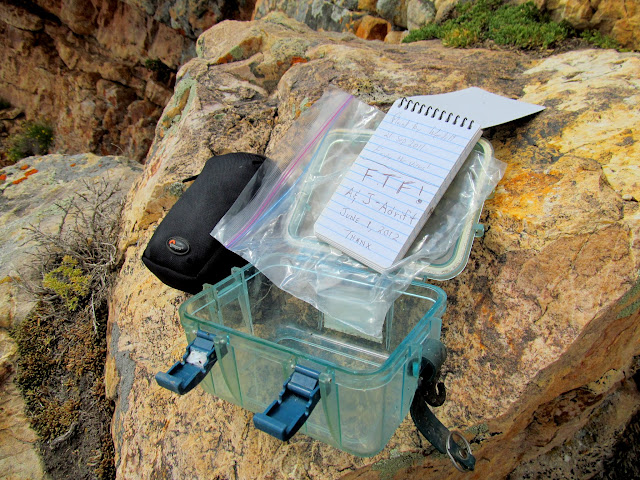 Panorama facing east from the summit

While descending Fool Creek’s west ridge, I mistakenly went down a fork in the trail. After only 100 feet I realized the mistake and stopped. Although this wasn’t the trail I’d ascended, it appeared that it would lead down into North Walker Canyon and join with the original trail. This trail was flagged with pink tape, which I’d also seen along the lower part of my ascent trail, but the flagging had been absent for the climb up to the divide. I went with it, assuming that earlier I’d missed the spot where the two trails joined down low. The descent had an easier gradient than my ascent, though in a couple of places it was necessary to follow the flagging in order to stay on the route. When I finally rejoined the route that I’d taken on the way up the mountain, it was clear why I’d missed the trail fork: someone had blocked it off with rocks and a tree branch. When I reached the ATV trail again it was sunny and hot. I’d mostly escaped the heat thanks to an early start and some cloud cover, but blue skies and afternoon sun made the last mile pretty uncomfortable. At the Jeep the GPS registered 6.7 miles in just over six hours, and there’d been 3,000′ elevation difference between the TH and the summit. A couple of months earlier a hike like that would have left me exhausted, but after doing hikes with big elevation gain every weekend my legs were getting used to the punishment.

Following a flagged trail down 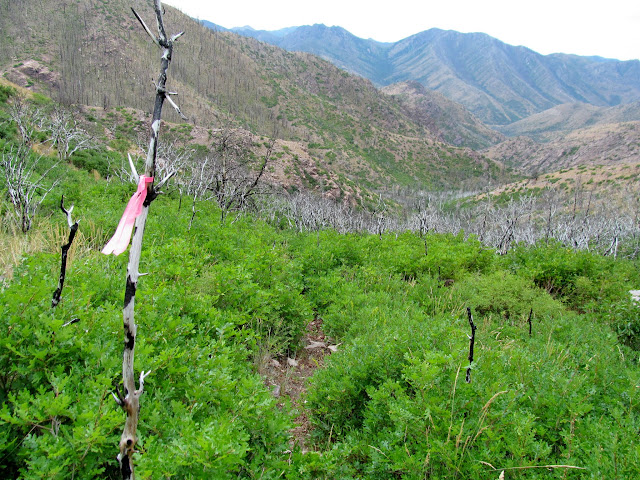 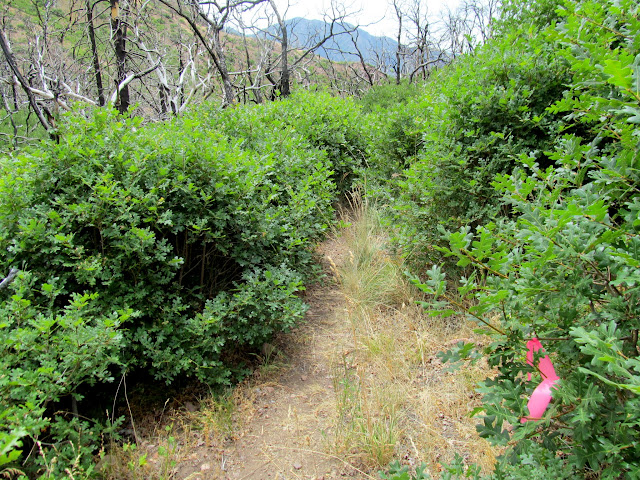 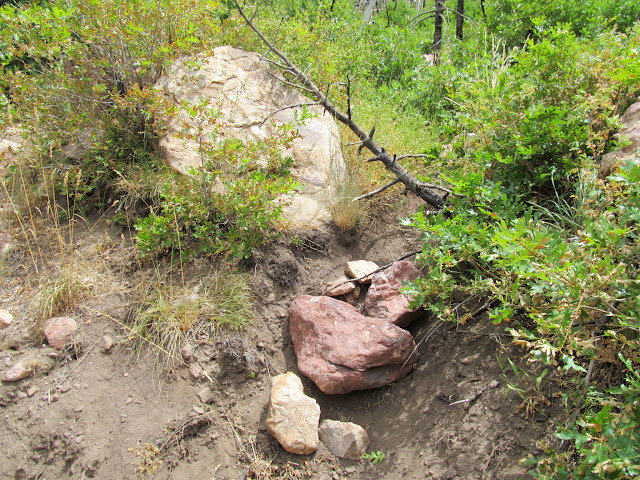 I had a big surprise when I returned to camp and decided to take a dip in the reservoir to clean up and cool off after the hike. Although my pants hadn’t gotten too dirty from hiking through the loose dirt and soot in the burn area, my legs were filthy! 😀 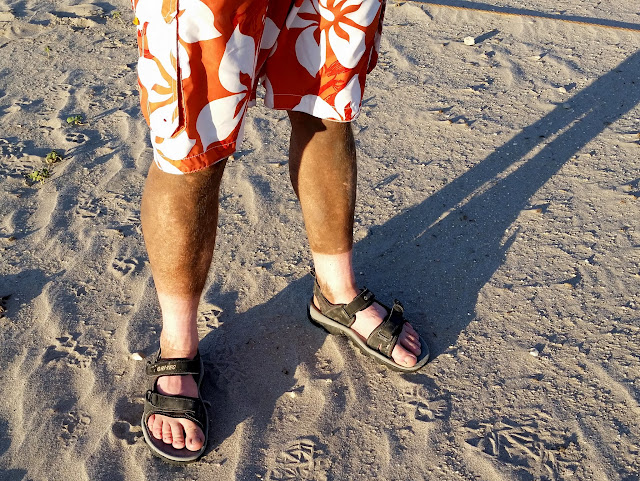