Wildflowers and cans of vegetables were once again in bloom at this spring’s semi-annual geocaching event in the San Rafael Swell. I had just sold my camp trailer and had plans to buy a different (older, bigger, and cushier) one but hadn’t yet found the right one. Instead, I planned to sleep in my Jeep, or possibly set up a tent if the weather allowed it. I drove down Thursday after work, and just as I hit the turnoff to camp the Jeep turned over 100,000 miles. There were already a few people at camp, and after saying hello and catching up briefly, they said that there was a package waiting for me before they arrived. It turned out to be some canned vegetables from some Canadian geocachers–a very cool surprise! I quickly set up my camp and walked around enjoying some wildflowers while letting the dogs run. 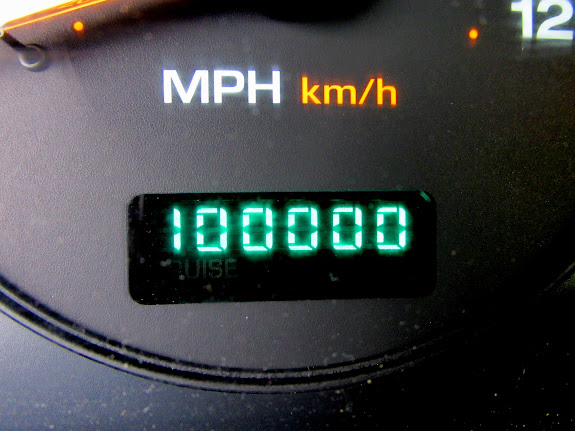 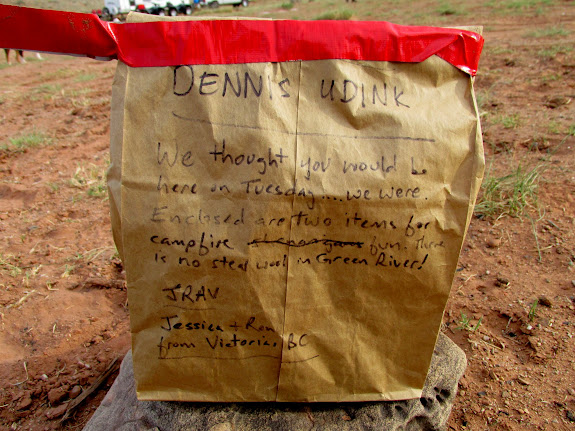 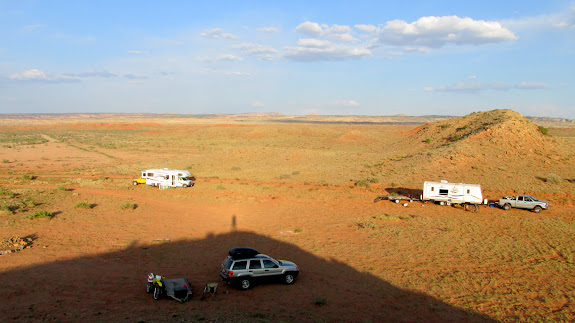 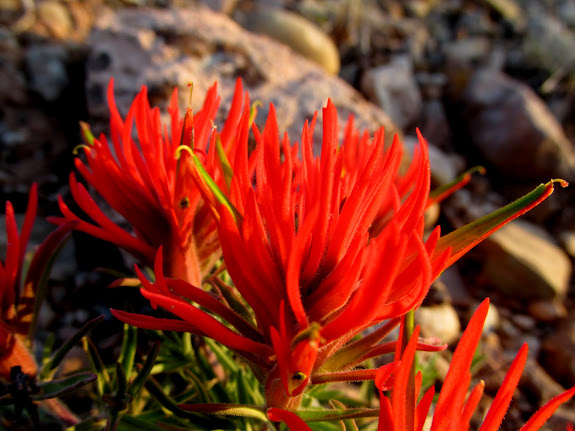 Boulders on top of the Red Ledges 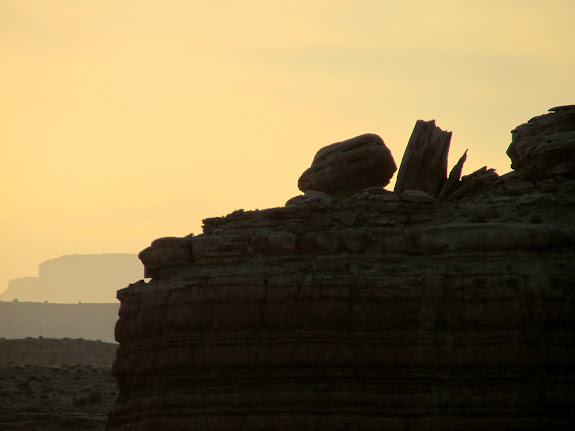 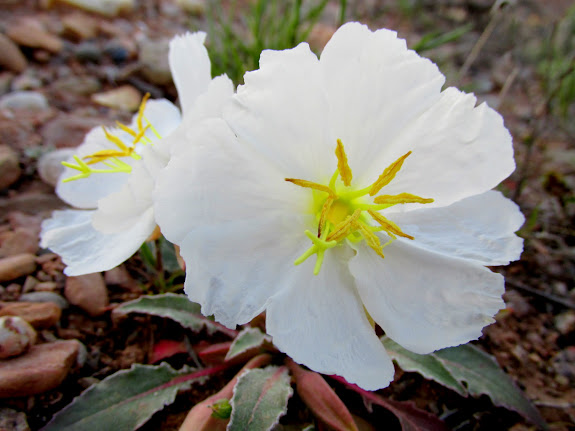 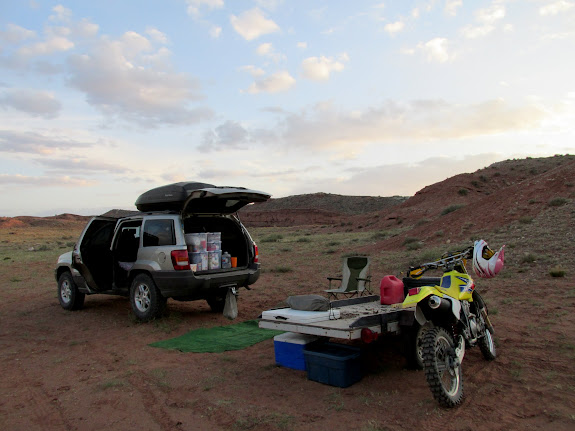 On Friday morning I went for a short motorcycle ride on Sand Bench to a point overlooking camp. Later in the day I took the dogs in the Jeep and hiked a bit at the Little Wedge. I walked down a closed road to an old mining area. There I found what I believe to be a concrete water tank, a dugout cabin, and a shallow mine shaft. 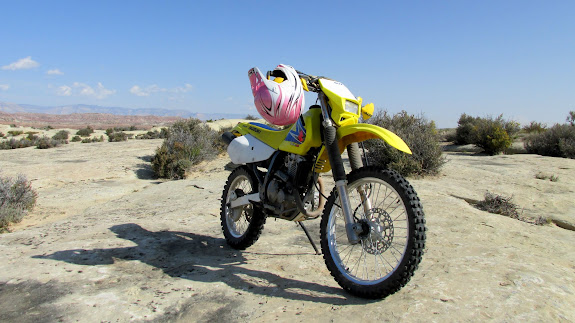 View of camp from Sand Bench 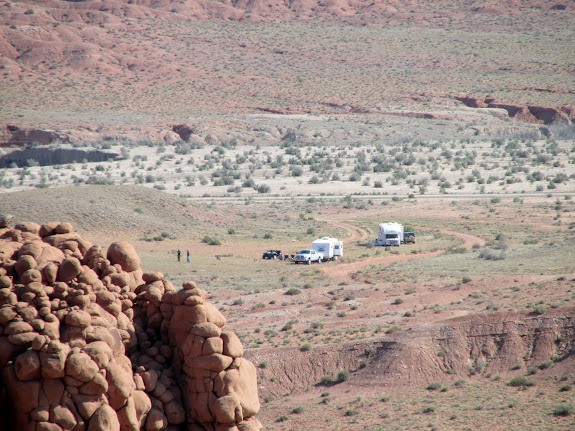 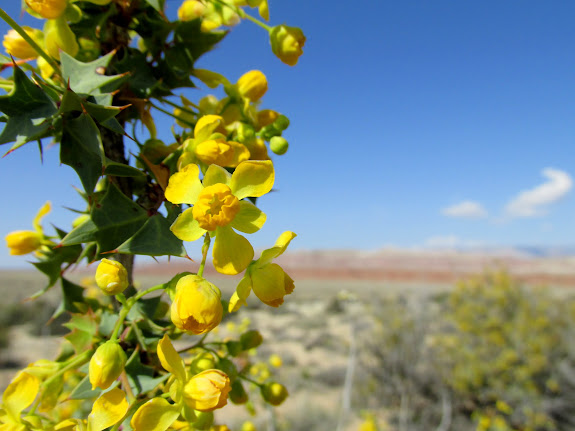 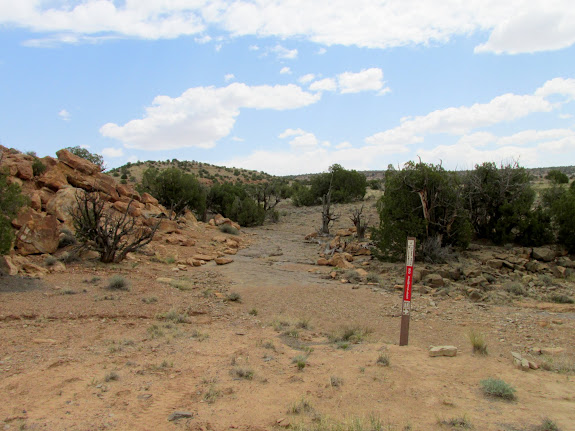 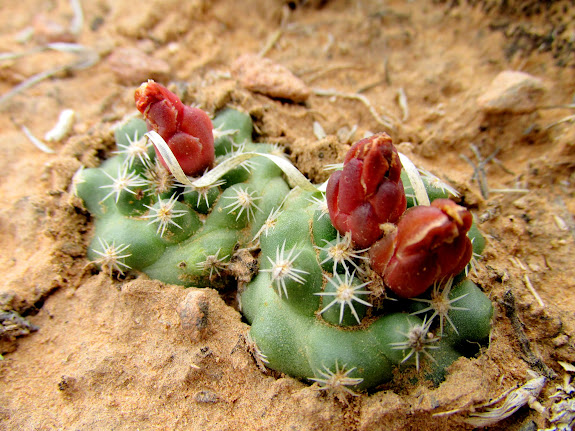 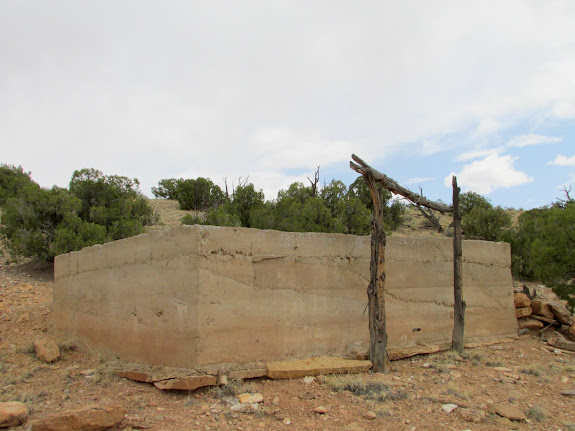 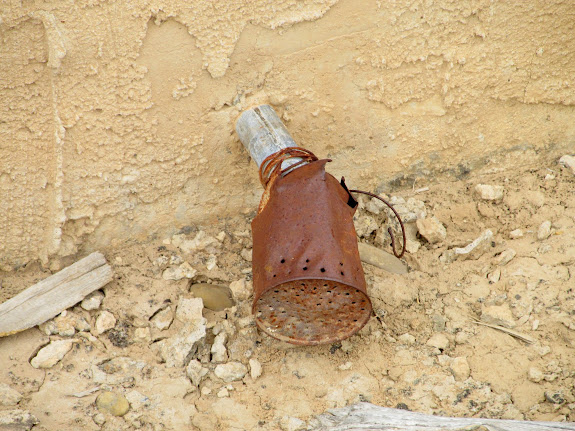 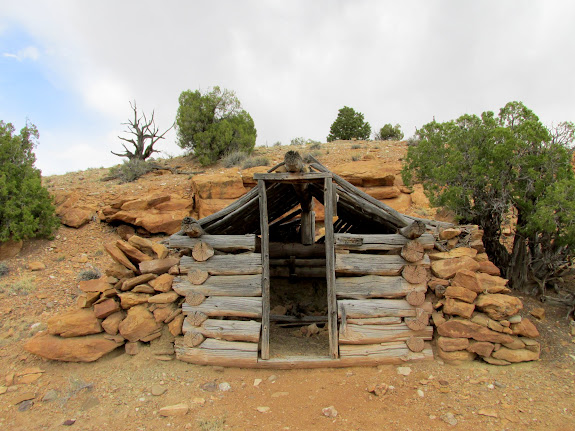 Top of the dugout cabin 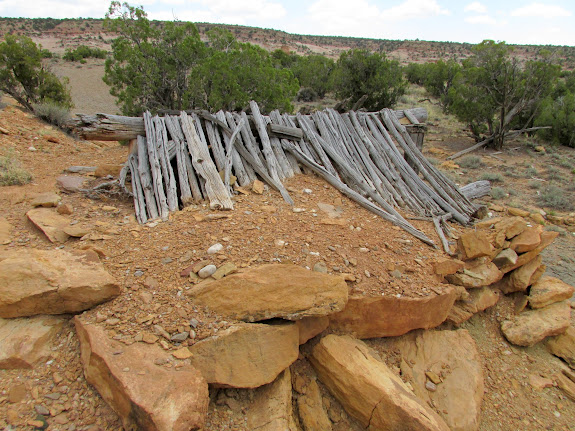 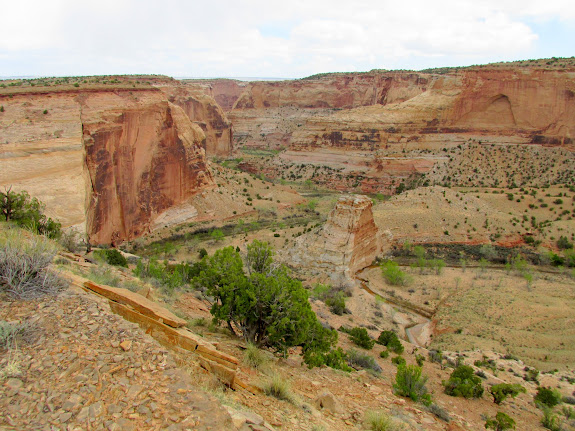 Jeep at the trailhead 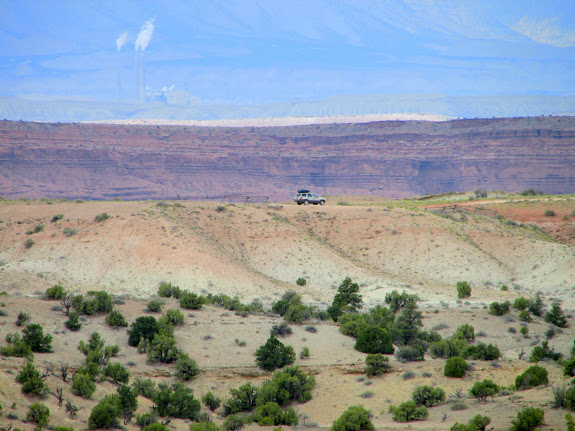 Coal on the ground near a small mine shaft 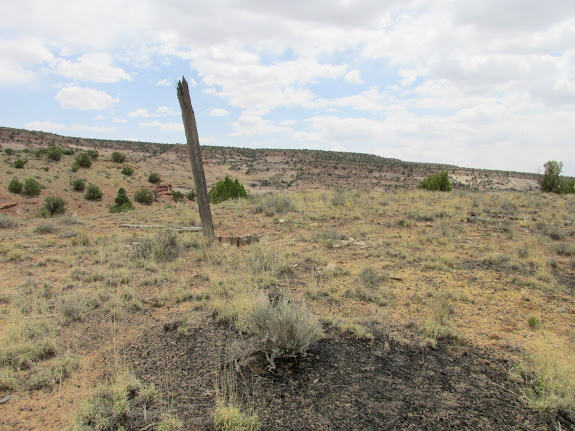 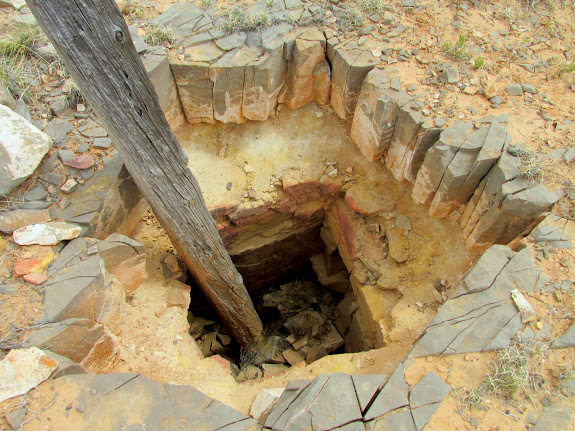 Before heading back to the Jeep I checked out a tiny little slot canyon tributary to North Salt Wash. I was hoping to get to a viewpoint into North Salt Wash from the end of the slot but a big pothole stopped me. Chris showed up at camp that evening and we spent it around a camp fire with a stiff breeze and occasional sprinkles. 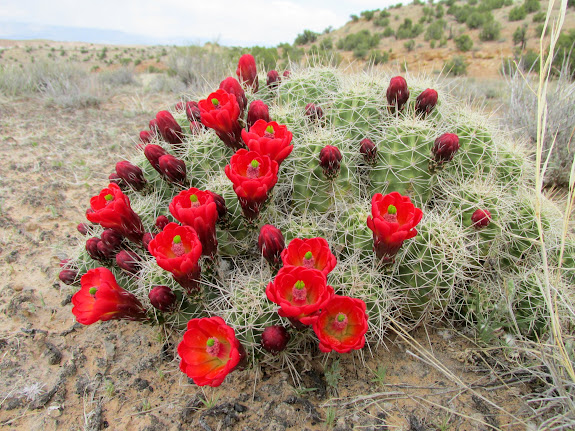 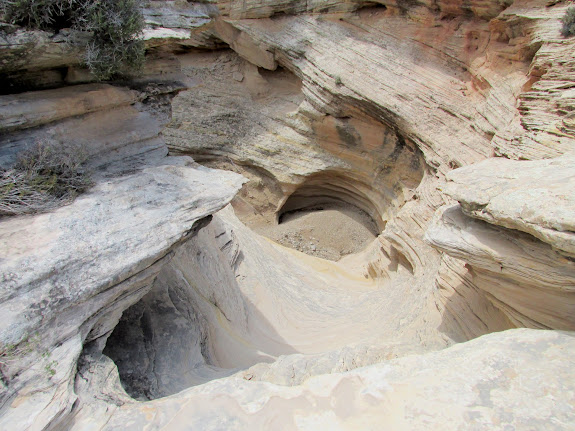 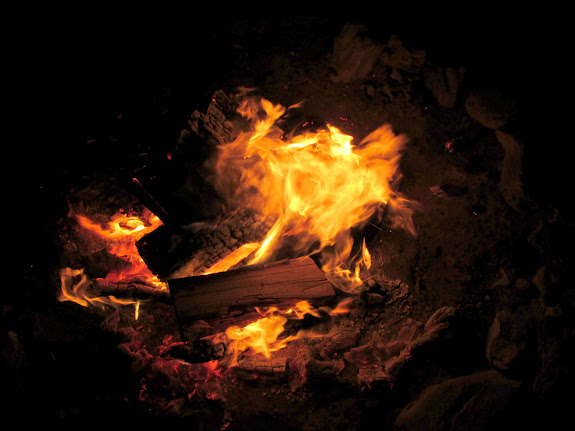 Traci drove the truck down on Saturday and planned to spend the night in the back under the camper shell. That morning our whole group did a trash clean-up event at and around the OHV trailhead at the north end of Coal Wash. I went for another dirt bike ride but I got chased back to camp by a rain storm before I could reach my destination (Sid and Charlie). It rained most of the evening and night, but that didn’t keep a few of us from having another good night at the camp fire.

Outrunning a storm on Sand Bench 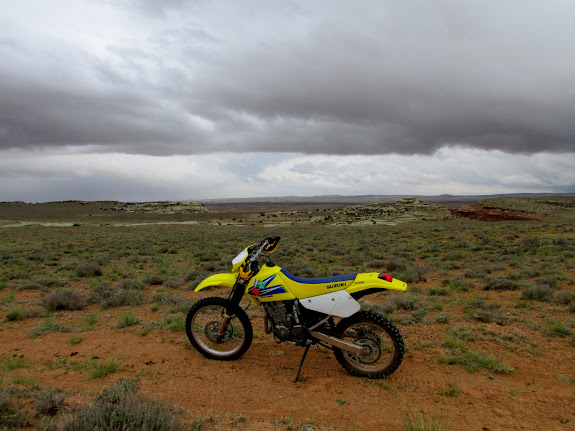 Waiting out some rain in the Jeep 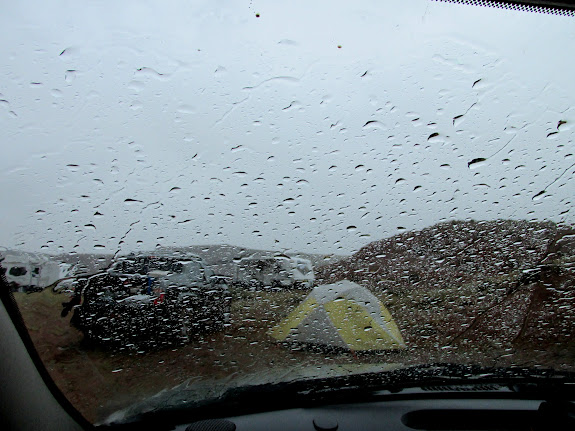 Corn in the camp fire 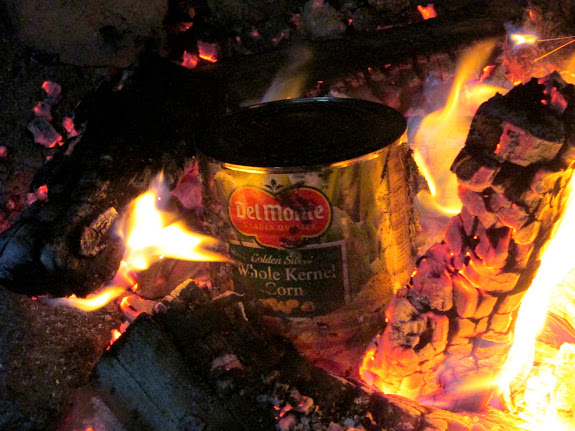 There were concerns on Sunday about getting everybody back to the pavement. Mike was the first to leave–pulling doubles!–and though he did briefly get stuck, he made it back to Ferron just fine. Traci and I waited around until nearly everybody had left. Jan and Ken were the only ones without 4WD, and they decided to stay another day to let the road dry out. I offered to return the next day to follow them out just in case they did get stuck, but they were pretty confident they’d make it out safely. I followed Traci back to Ferron. We stopped where a group of motorcyclists in a U-Haul truck had slid off the road and gotten stuck. I took over the driver’s seat in our truck and pulled them out of the mud, then we continued on our way toward home. Jan and Ken were able to drive out the next day, much to my relief. Due to the weather the event was shorter and had lower attendance than usual. I hope this fall we can make up for it.

Torrey and Boulder sunning in the Jeep 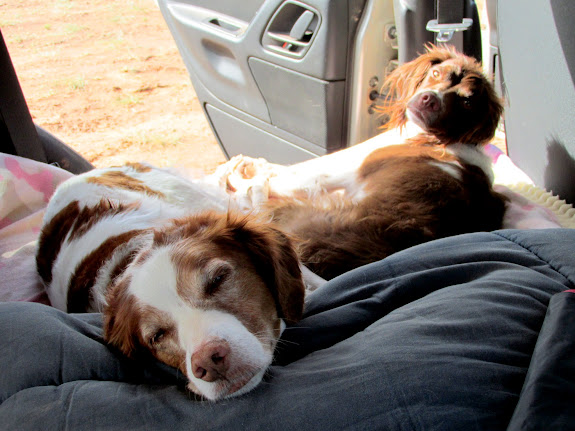 Mike getting after it in the mud 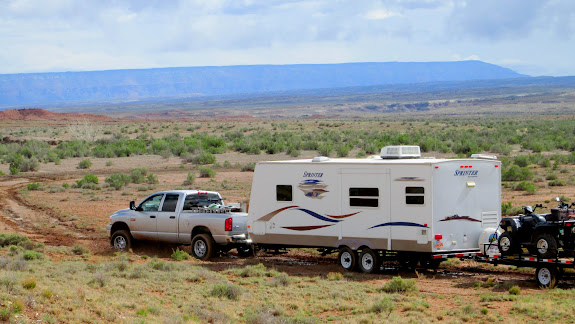 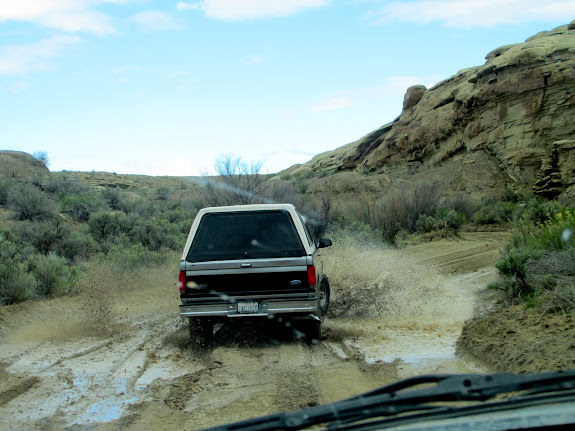