I haven’t hiked much in the past two months. I had hoped to remedy that on Memorial Day weekend, but the continued rainy weather got the best of me. I was able to get out on Sunday to hike for a few miles with the dogs to a place I’ve been wanting to go for a while. Several years ago a guy named Ted had seen my website and called me on the phone to chat about archaeology in the San Rafael Swell, and while on that subject he mentioned some alcoves where he’d seen rock art and habitation structures. I had a placemark for that spot in Google Earth since then, and on Sunday that hike just happened to fit the bill. I found a place to park among the many other occupied sites on the nearby main road, and started hiking cross-country. Despite the supposed dire drought conditions in Utah, the weeks of rain had produced a lot of wildflowers. 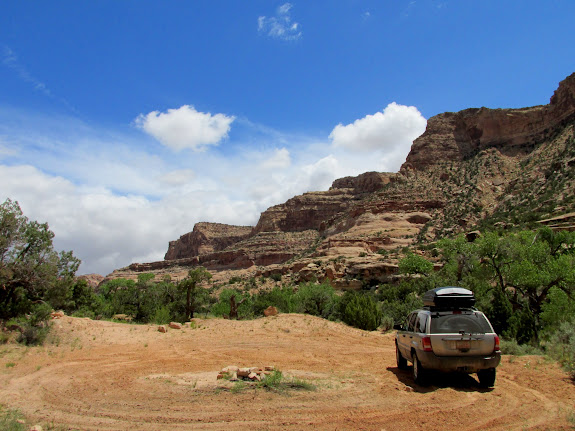 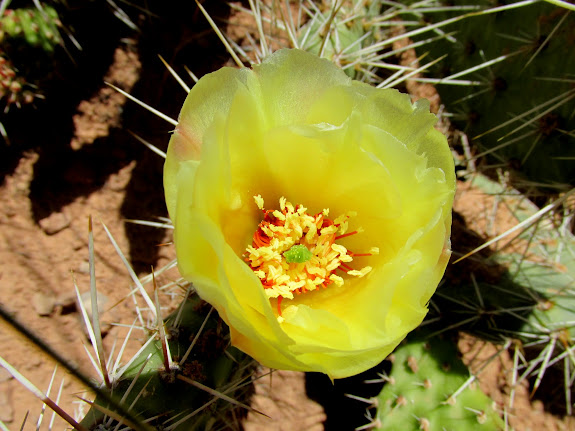 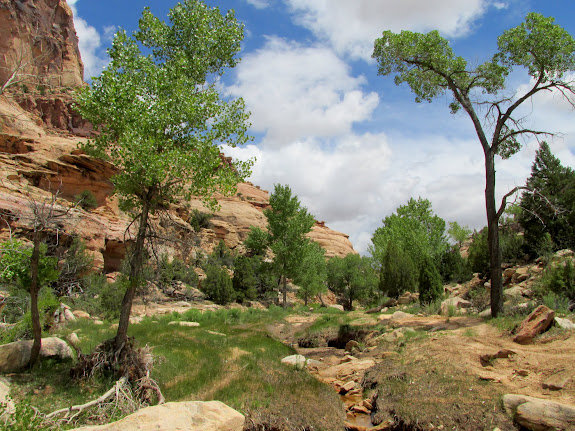 A field of Globe Mallow I reached the alcoves and left the dogs to rest in the shade below the first one. I found nothing at all of interest in the first alcove and quickly became disappointed. I did, however, find a modern glyph that I’d seen near other Indian sites, and a geocache that had never been listed online. 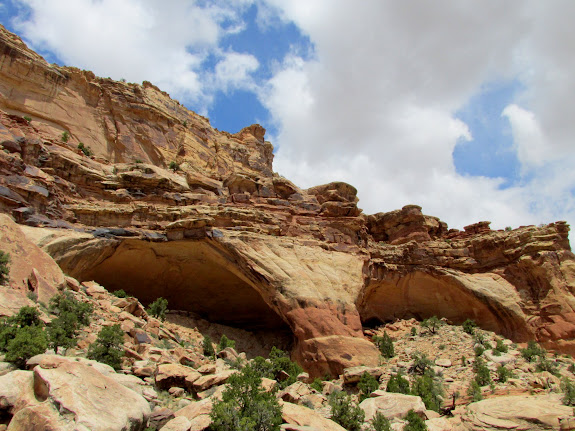 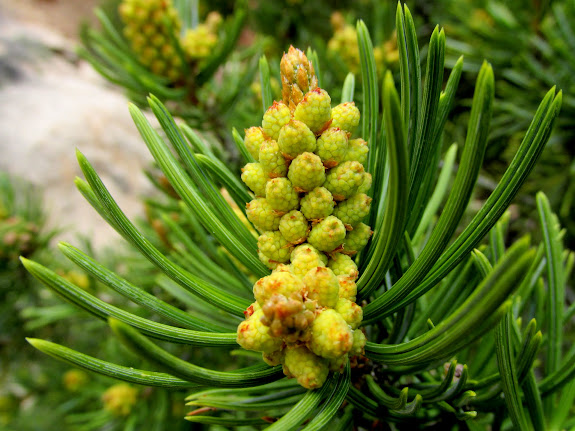 Boulder and Torrey in the shade while I explored an alcove 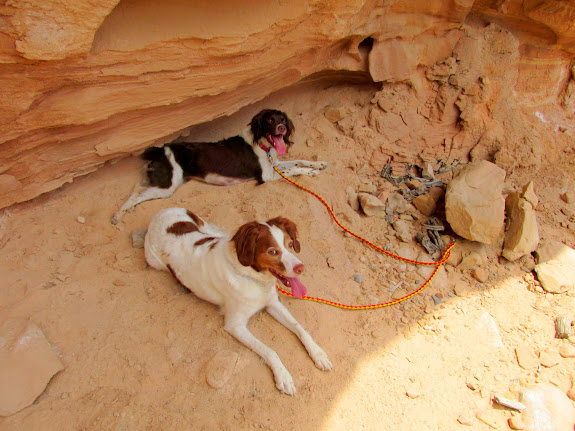 View out of the first alcove 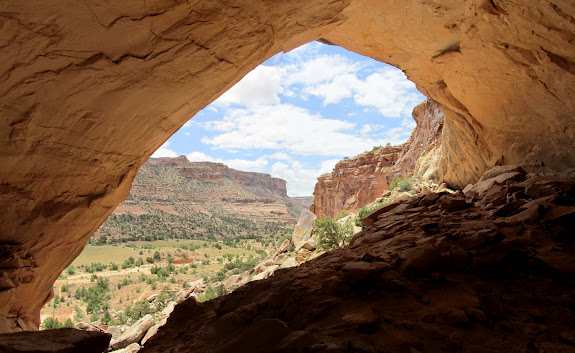 Modern glyph that I’ve seen at several other sites 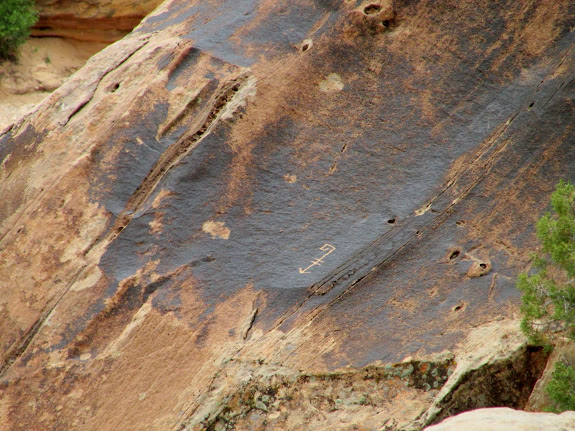 Geocache that has never been listed online 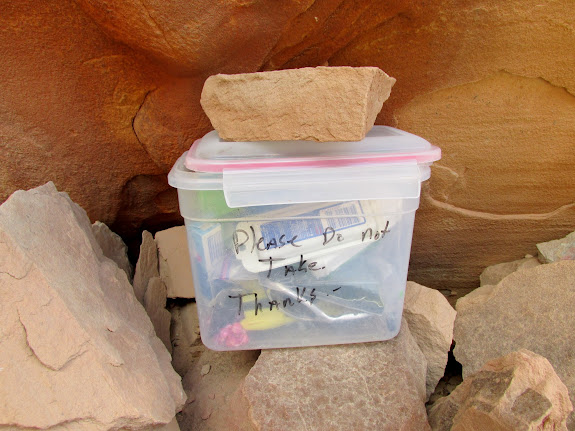 I descended from the first alcove and retrieved the dogs, then scrambled up into the second alcove. There I found some petroglyphs and pictographs that made the trip worthwhile. The petroglyphs had been rubbed with chalk and charcoal. Some of the pictographs appeared to have been rubbed out, but I could still make out two human-like figures alongside a half-circle of tiny, interesting bird pictographs painted with two colors of pigment. Above that panel was a scene apparently depicting rain and lightning.

Inside the second alcove 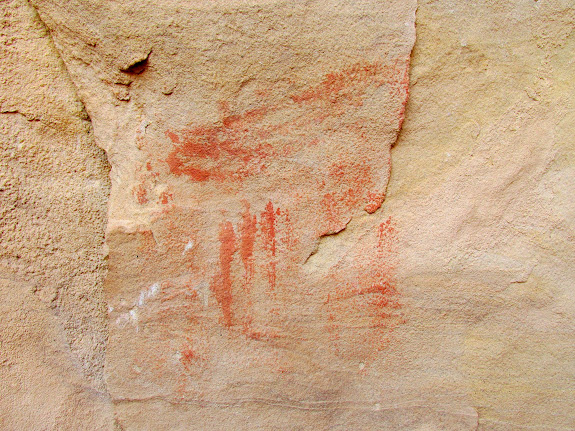 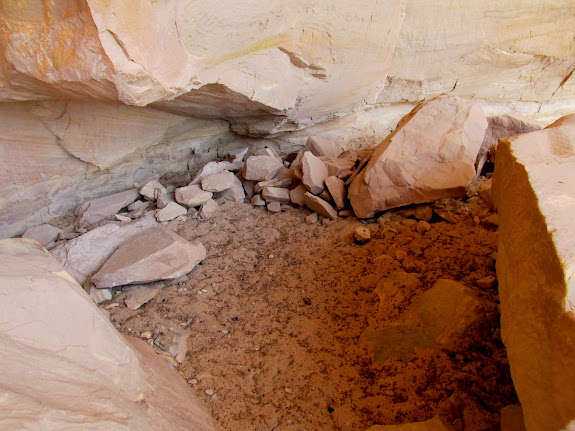 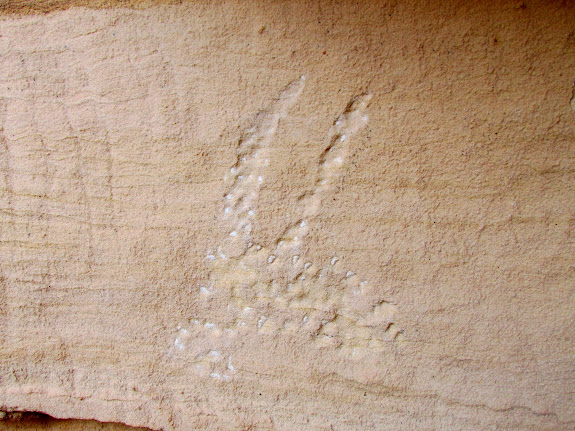 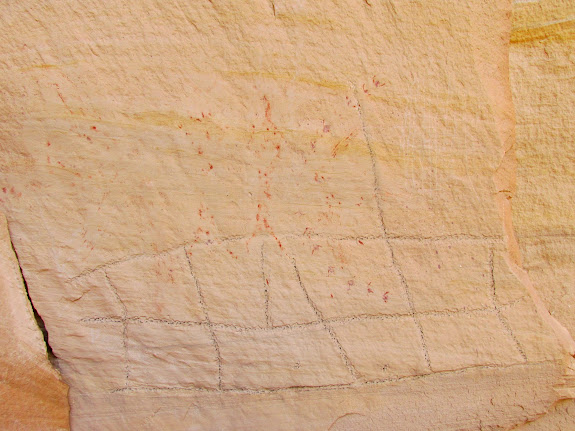 Part of a half-circle of tiny bird-like pictographs 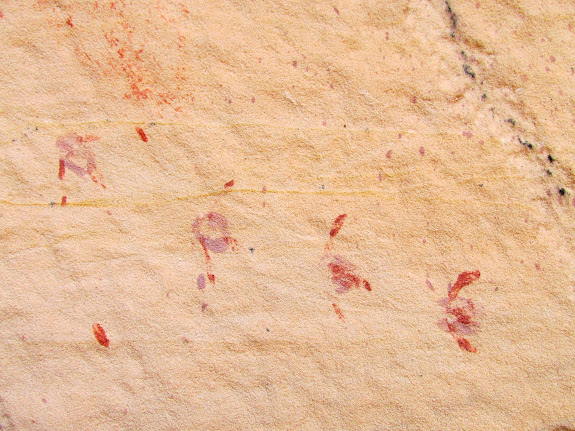 Close-up of bird pictograph, approximately the size of a quarter 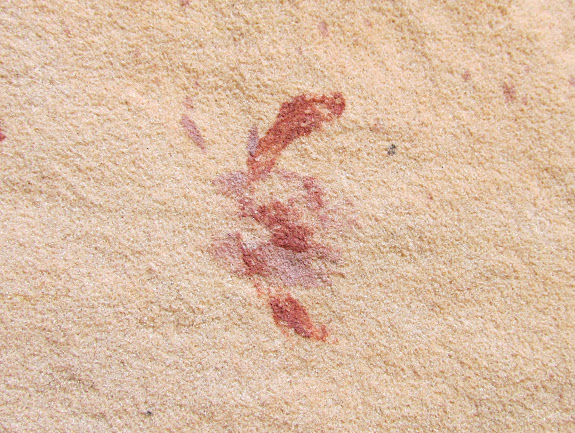 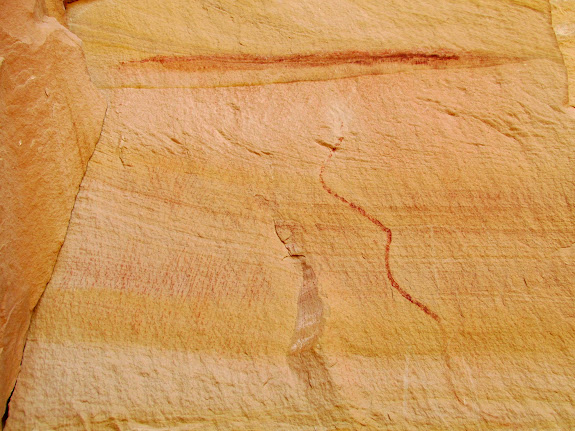 Another grid petroglyph that’s been chalked 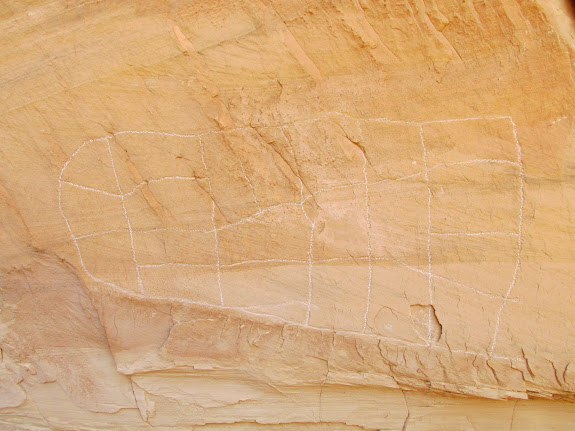 A little farther beyond the alcoves I found a few more petroglyphs. I took a different route back to the Jeep and saw many more wildflowers and found some water for the dogs to play in. Although it was a busy weekend in the Swell I surprisingly hadn’t seen any other people while I hiked, though I did hear many vehicles pass by on the main road below. I got home just as it began to rain again, and spent the rest of the long weekend catching up on some much-needed yard work while dodging rain storms. 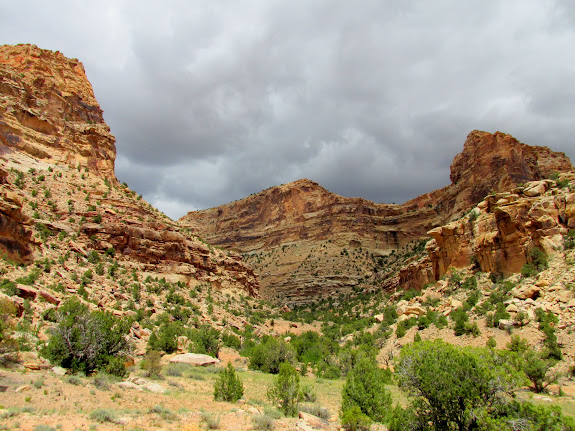 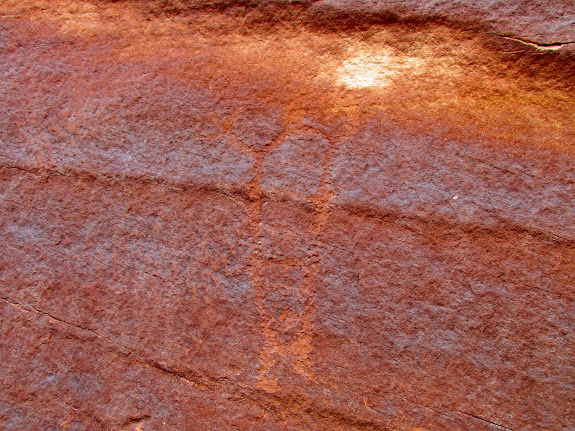 Abraded elk that may be legit, but the stick-figure guy holding a spear and shield is surely modern 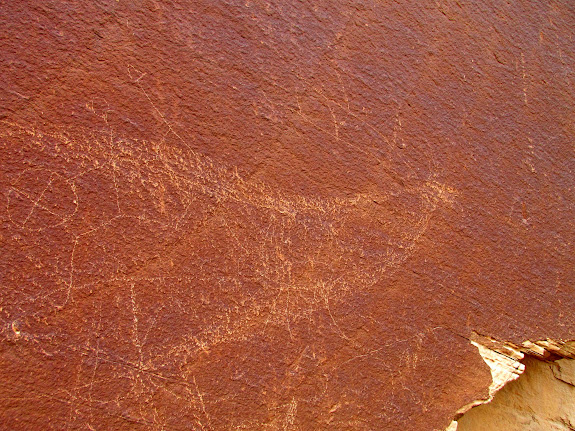 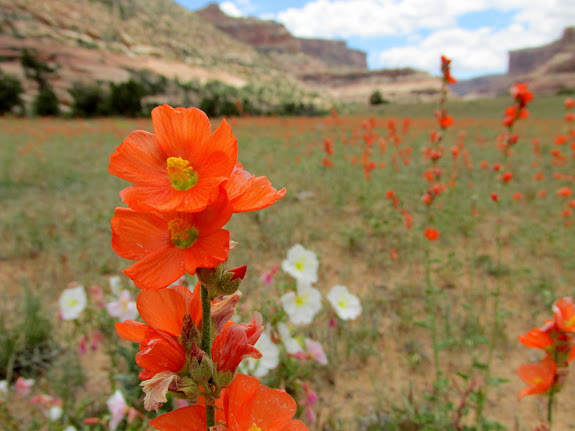 Boulder and Torrey in a pool of water 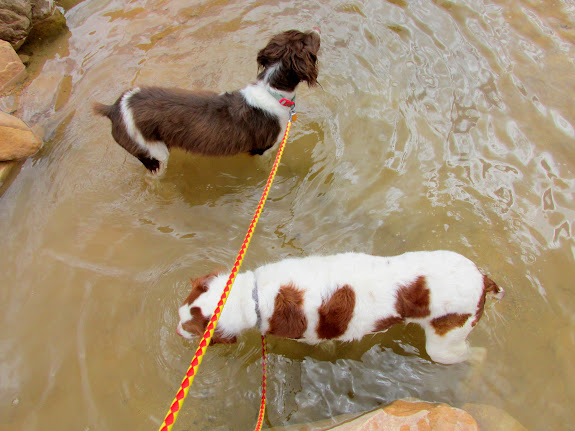 Something from the sunflower family 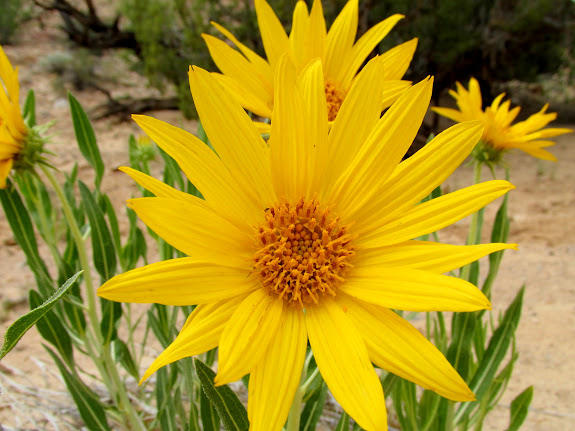