On Thursday I went for an ATV ride with a group from CCOHVA along the South Fork of Gordon Creek. During the ride where the road followed the rim of Haley Canyon, I caught a glimpse into the canyon and thought it would make for a nice hike. That’s not the first time I’ve been past there and thought that, but since I had no other plans this weekend, I decided that today I’d give it a shot. More than halfway through the drive to the canyon this morning I realized that I hadn’t taken my GPS. I waffled for a minute trying to decide if I wanted to turn around and get it, but it was already fairly late in the morning and I was eager to get into the canyon (I drew an approximate path to include in the KMZ file below). I arrived at lower Haley Canyon, just east of where the railroad tracks cross it, and found a pair of ATVs parked there with a couple and their two dogs. I parked nearby and said hello to them, then leashed Torrey up and started hiking down the canyon. There’s a spring flowing out of the sandstone which made the first half-mile of the canyon a wet and muddy affair. 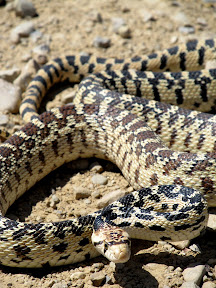 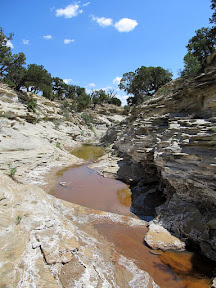 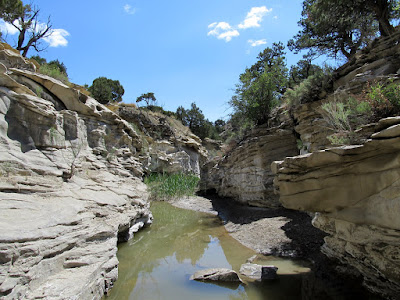 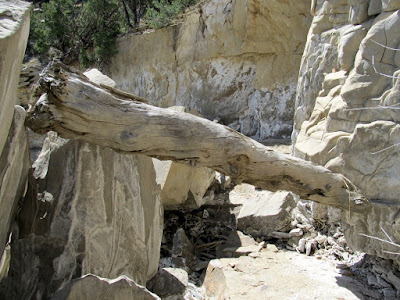 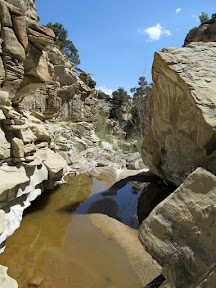 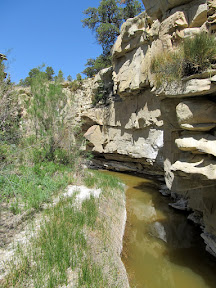 I expected the water so I’d worn some old shoes. I still tried avoiding the water, but a few minutes into the hike I slipped and had to step into ankle-deep muck and water to keep from falling. My plan was to hike down Haley Canyon to Gordon Creek, then follow the creek upstream to the railroad trestle and walk the road back to the truck. I didn’t specifically know of any rock art in Haley Canyon but I’d seen some along Gordon Creek, so I was stopping frequently to scan the canyon walls. After about a half-hour of hiking I left the water course to check out a promising-looking cliff line on the north side of the canyon and found an indistinct pictograph there. That certainly whet my appetite for what was to come. 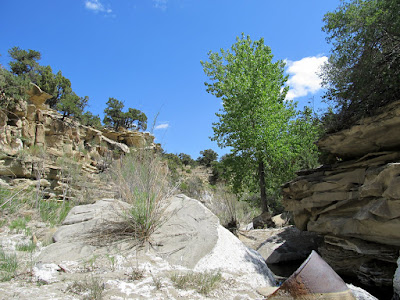 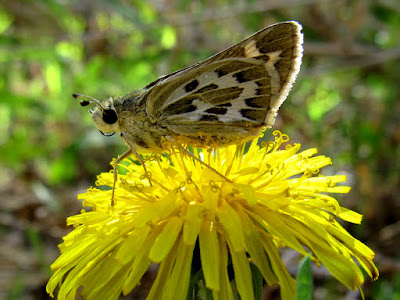 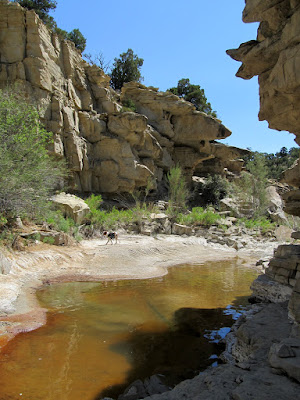 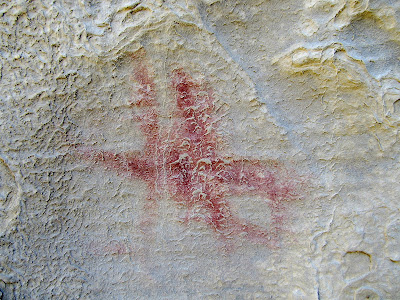 There was no more water in the canyon after that point–the small trickle of spring water dried up beyond it. Where the canyon made a sharp bend to the north, I found an alcove on the east side that looked like it could have made a good Indian shelter, but there was nothing in or near it except for possibly a faint petroglyph on a small boulder. The canyon was getting less interesting as I descended it, but after a few more bends I saw another promising overhang below a cliff. I approached it and saw some rocks stacked in an unnatural manner, then my heart beat faster as I realized they were held together by mud. There was one wall of a granary still intact, with one roof timber still in place and others scattered around. I carefully searched around and found a couple of corn cobs, and after I’d been standing there a while I realized there was a faint pictograph just above the granary. I followed the cliff line first one direction and found a small zig-zag pictograph, then the other direction where I found some great pictographs. 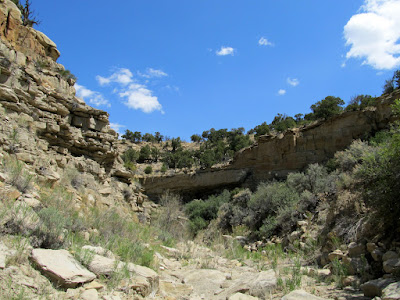 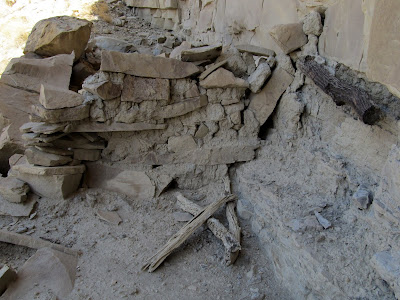 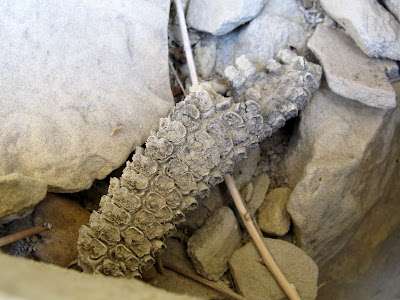 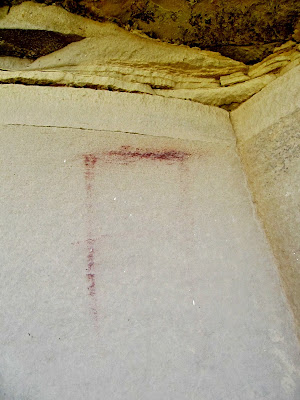 I spent nearly an hour there. I’d forgotten to bring lunch, so I forced down a couple of stale fig bars that I had in my pack. Torrey and I sat there for a while and rested, and I did a lot of snooping around without trying to disturb anything. Near the nice set of pictographs I found a piece of metal mesh lying at the base of the cliff, and I assume that at one time it was somehow attached above the pictographs to keep swallows from nesting there (it wouldn’t be the first time I’ve seen rock art covered by mud from swallows’ nests). I definitely wasn’t the first modern human to find this place, but I don’t think many people know about it. After a nice rest in the shade, and feeling comfortable that I hadn’t missed anything interesting, I headed further down the canyon. 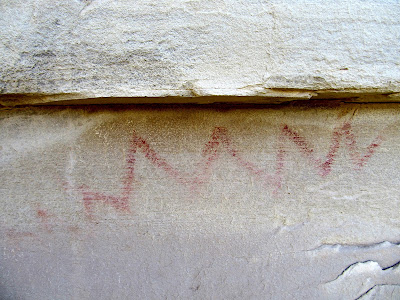 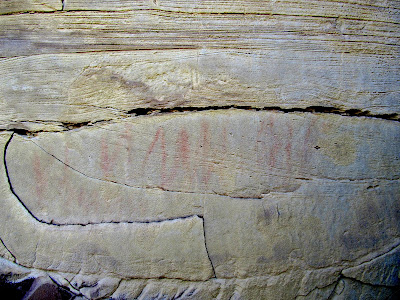 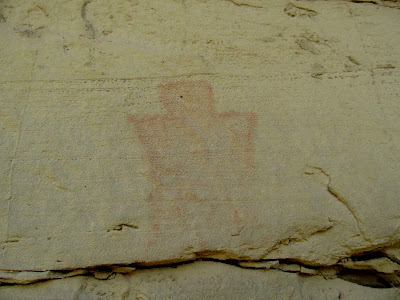 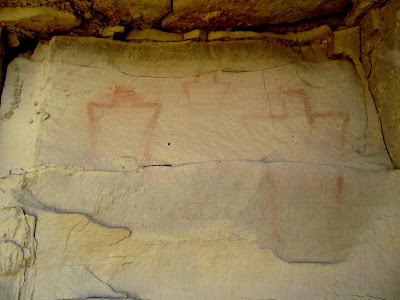 The rest of the canyon was nothing special. Just beyond the granary the canyon had been filled with silt and gravel deposits, presumably from ancient flooding during wetter times. The modern water course had cut deeply into the deposits, leaving dirt walls instead of sandstone like the upper part of the canyon. I could have climbed up to the bench atop the thick silt layer and explored the sandstone cliffs from there, but from previous experience I knew it could be difficult (and after looking at the area in Google Earth since getting home, I think I made a wise choice). I stayed in the main water course until I reached the confluence with Gordon Creek. There was heavy tamarisk and Russian olive just before the confluence, but along the creek itself it had mostly been cleared recently by the Canyon Country Youth Corps. Near the confluence I found a broken arrowhead point. One side had definitely been worked before it broke, but it’d sat in the water course long enough that erosion had smoothed out all the sharp edges. 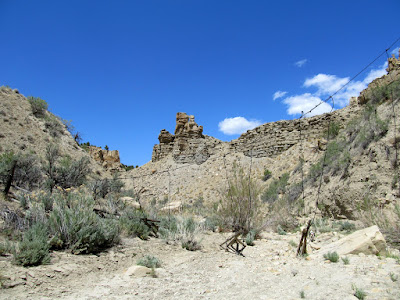 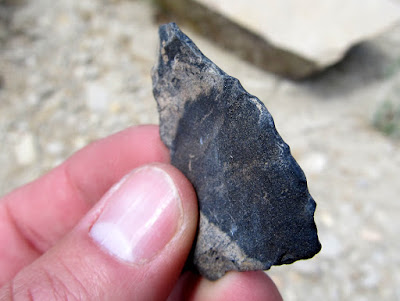 There were sheep all along Gordon Creek, most of which seemed to be baby lambs. Many were so young that I saw a few dried umbilical cords on their bellies. The baby lambs were very cute, but with Torrey and me walking along the creek, a lot of the momma sheep weren’t too happy about us being there. Mostly they just tried shooing the babies away from us while making odd-sounding panicked cries. I had to cross the creek many times (I lost count after the first half-dozen or so). At first I tried crossing where it was easiest, but after a few times I gave up and just started trudging right through regardless of the water depth. Torrey seemed to be having fun splashing through the water, and she smartly avoided getting too close to the sheep. 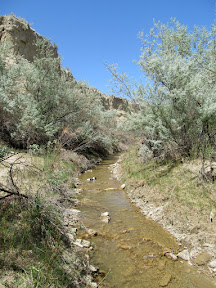 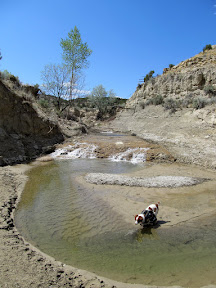 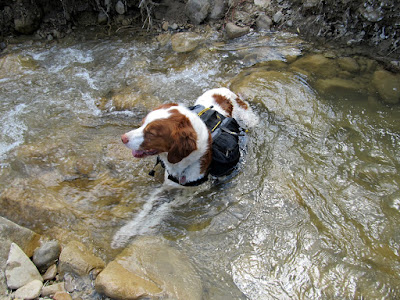 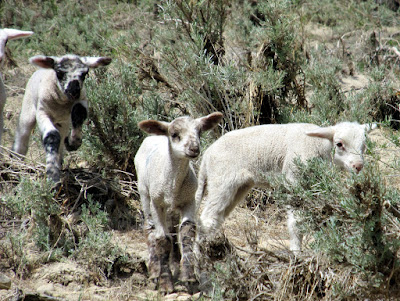 I got close enough to see the railroad trestle and thought I was near the end of my day’s journey. I was still half-heartedly keeping an eye out for rock art, and I spotted a bright pictograph high above the fluvial terrace (I just had to look that up, I knew there was a name for those!) under an overhanging cliff. It was a very steep and loose climb to get to the top of the terrace. The bright red pictograph I’d seen from below was well-preserved. It was a horned figure carrying what looked like a doll in one hand and a shield in the other. Below it was a fainter figure, and what appeared to be another figure between them that had been covered in mud, or possibly it was just a light pigment meant to match the color of the sandstone. I followed the cliffs looking for more rock art, and found quite a bit more. To the left were some pictographs 20 feet up the cliff, with no possible way of reaching them without climbing a ladder or descending a rope. To the right were some white pictographs that were different in style than all the red ones. Just as I was about to leave, I was surprised by a couple and their dog walking toward me. We said hello, then I said to the man, “I assume you’ve been here before?” He had indeed–he told me that when he was in Boy Scouts, his Scout leader showed the troop this rock art. 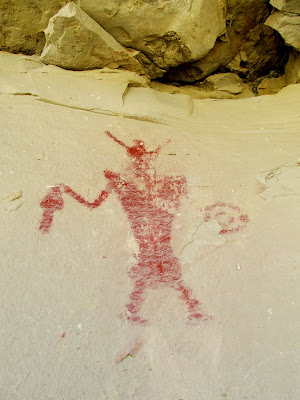 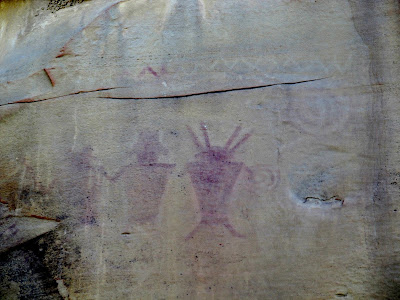 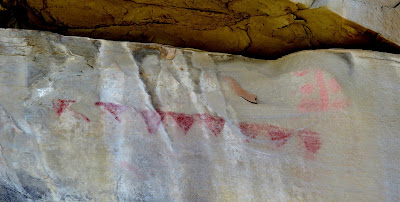 I headed back on my way upstream, but this time on top of the fluvial terrace, which saved me a steep climb out of the creek once I reached the road. I got to the road near the south end of the railroad trestle after a gradual climb, and I walked past the couple’s truck–they must have walked in the same way I walked out. I followed the road for a short while, then followed the railroad tracks because it seemed like that would be the most direct and least steep route back to the truck. Walking on the ties with rock ballast scattered over them turned out to be uncomfortable, so I cut back over to the road which roughly paralleled the tracks. I found myself wishing that I’d left a cold drink in the truck for when I finished the hike, but that wish turned out the same way as those for my GPS and some lunch. 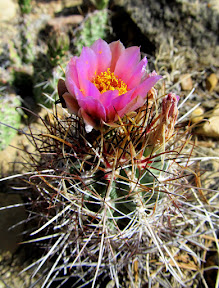 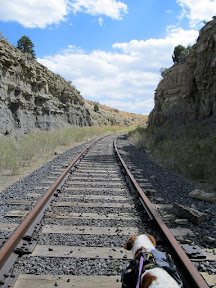 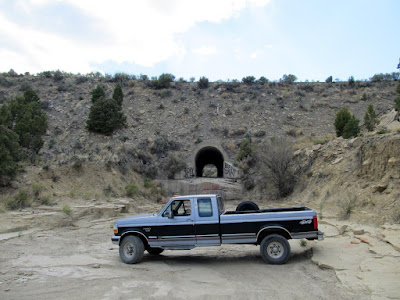