Traci and I planted our garden on Saturday. We’ve got mostly tomatoes (a few varieties), some squash, strawberries, and lettuce. I got some other yard work done that day, and this evening I enjoyed the coolness of an early summer storm (that hasn’t produced any rain) and finished weeding the flower beds in the front yard. Sunday was Mother’s Day and I had a nice surprise for Traci. I bought her an air mattress so she could go camping more comfortably with the boys and me, but I removed the mattress from the box and replaced it with a Kindle Fire. When she pulled the mattress box from the gift bag on Sunday morning she seemed to like it, but I told her I slipped the card into the box. She opened the box and cried when she realized what was inside. I suppose that means she liked it.
I made breakfast for everybody–bacon, eggs, and toast–then brought my mom’s gift to her and visited for a while. That evening after a dinner of ribs and corn on the cob, we went for an ATV ride–at Traci’s request, even!–with the Gravett family. They have a Polaris Ranger Crew that holds their entire family, and Traci and I followed on our two ATVs, each with a kid on the back. We rode up toward Kenilworth then took the Diff Hanger trail which follows a bouldery wash, and is coincidentally where my dad’s ashes are scattered. Doing the trail on ATVs presented a few challenges but made some parts easier than in a full-sized vehicle. Traci and I took bypass routes in two spots but Chris took his Ranger through the entire trail, having to winch up one tough spot. It was a fun ride, and we finished up just after the sun went down. I feel lucky to have a wife whose idea of a fun Mother’s Day is to do a difficult rock-crawling ATV ride. 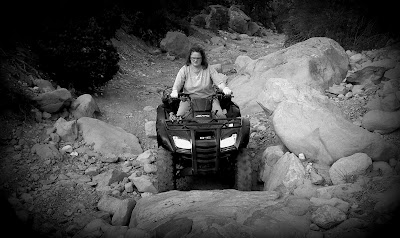 Yesterday was mine and Traci’s 14th wedding anniversary. Fourteen years doesn’t seem like too long a time unless I start to think of it as almost fifteen years. We didn’t exchange gifts–we rarely do. We spent our anniversary at home with the kids and fixed a hugely obscene dinner of ribeye steak, shrimp, lobster tail, crab legs, and corn on the cob, which we ate while watching Deadliest Catch. It was typical of our anniversaries, but I think next year we’ll do something special.