I can check another thing off my to-do list. Since looking at topo maps of the Box Flat area a few years ago, I’ve wanted to hike to the survey marker on top of Nate’s Peak. I enjoy visiting remote survey markers, especially those which were set by a survey crew via helicopter like this one. Mark had Saturday off work and we made plans to try summiting Nate’s Peak, then hike a few more miles south-southwest to Point 6,648′. We left Price at 8:00AM, and I was so used to driving to the San Rafael Reef on weekends that I started heading toward US-6 before I realized my mistake and turned around toward UT-10. I brought my ATV so I didn’t have to take the truck across the rough road to Box Flat. We parked near the head of Big Hole Wash, unloaded the ATV, and rode brokeback to the south end of Box Flat and parked at the wilderness study area boundary. It was just under a mile and a half to the base of Nate’s Peak from there, and the hike was relatively uninteresting along an old 4WD route. We occasionally caught scant glimpses of something interesting in the East Fork of Red Canyon, but we were too far from the rim to see much. 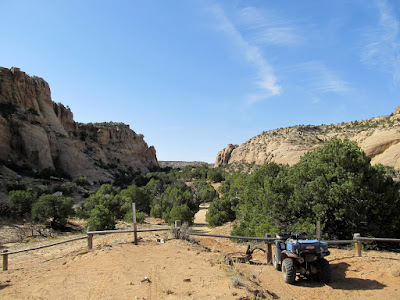 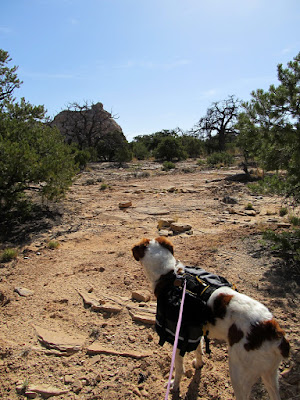 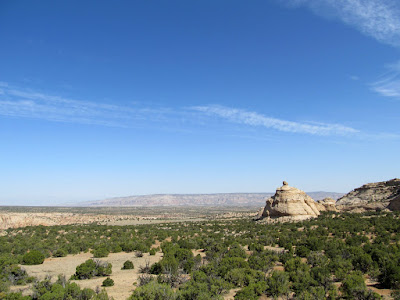 The cliffs surrounding the top of Nate’s Peak looked impossible to breach from the bottom. There were several breaks in the cliffs but they looked nearly vertical and too tall to scale. The scramble to the base of the cliffs was steep, rocky, and loose. Once at the base, we started feeling around for any weakness that would lead to the top. We circled around to the southwest end of the peak and couldn’t go further that direction, then circled back around to the east end and couldn’t go any further. Along the way we’d seen only one spot that looked remotely within our abilities to climb, so we returned and looked at it more closely. I left Torrey below with her leash attached to a tree, and just as I was about to start climbing up to feel out the first pitch my phone rang. It was Joane, as she’d said she might make it there on horseback to watch us attempt the climb. She has a grazing permit in the area and wanted to see some photos taken from the peak of the surrounding land. She and her friend, Larry, were only about a third of a mile away and approaching us from the north. I told her where we were, then continued the climb. I was more worried about coming back down than getting up in the first place, so I climbed past the worst looking part and then descended again while Mark remained below just in case I needed help getting down. The climb went smoothly, though, so I went back up, Mark handed our packs up to me and then followed. There was one final but easier climb to get to the very top of the cliffs, then we were on top! 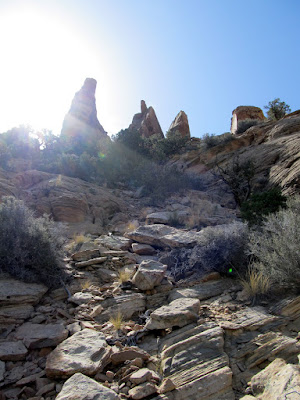 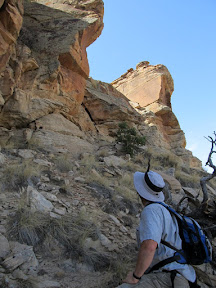 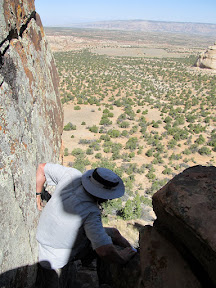 I was satisfied enough at that point that I could have turned around and went home and still considered the day a success. I took a lot of photos from the top of the peak and placed a geocache near the survey marker. I was surprised to find the survey marker and both reference marks unstamped. The National Geodetic Survey datasheet for the marker shows that it should read “NATES 1952,” but it was blank. Maybe the surveyors figured nobody would go up there, so why bother? 🙂 Mark and I climbed back down, then descended the rocky hillside to where Joane and Larry were waiting. Here are the photos Joane took of Mark and I on Nate’s Peak. We talked for a while, then Mark and I set off for the second part of our hike. We stopped for lunch at the south end of Nate’s Peak and enjoyed the view into the head of Nate’s Canyon before continuing. 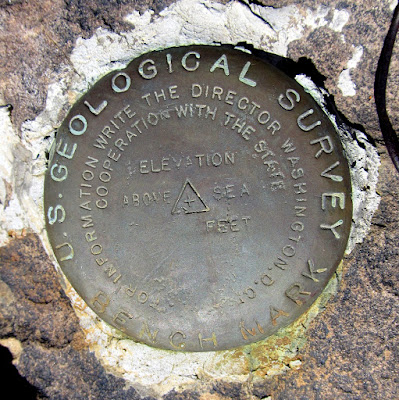 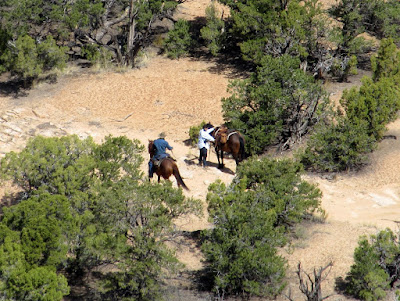 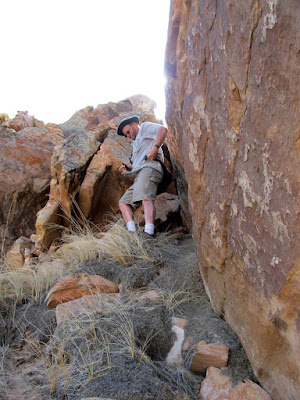 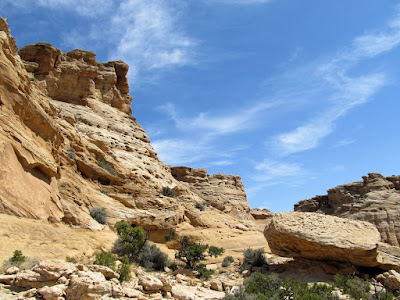 Much of the rest of the hike still followed the old 4WD route, though since the fence was put up at the WSA boundary, it appeared that mostly horses and cattle use the trail now. We did follow a single set of fresh footprints that I assume belonged to the owner of an old Chevy Blazer parked at Box Flat, but we never did encounter the owner. We enjoyed a nice view into the head of Spring Canyon to the west, and nicer views to the east over Red Canyon and Devil’s Hole. We got to a steep ridge that we descended, after which all signs of vehicular use ceased. In fact, there was no trail at all past that point, not even a horse trail. After descending the ridge there was a gentle ascent to Point 6,648′. We crossed some slickrock and saw lithic flakes on the ground, which surprised me given that we weren’t near any accessible canyons or water sources. We reached Point 6,648′ (so named because of its elevation and lack of an official name on the USGS topo map) and found a large cairn nearby. The view was just incredible. 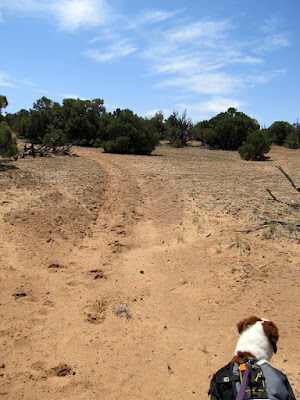 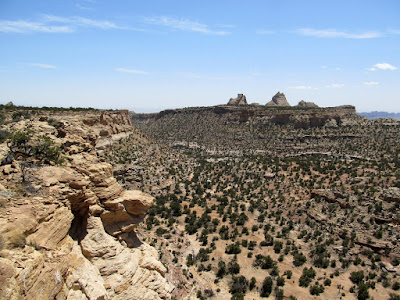 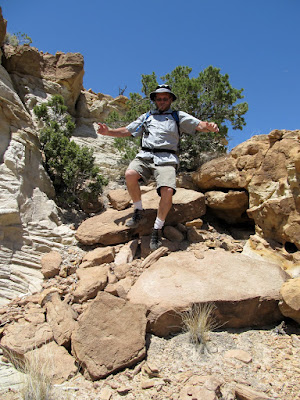 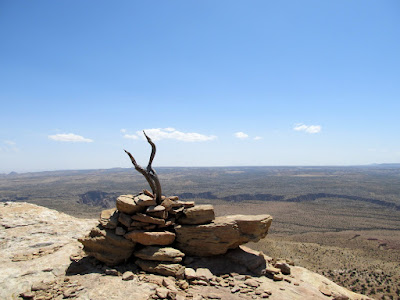 Mark and I spent quite a bit of time there. We rested, ate and drank a bit, and I let Torrey finish off the rest of the water she’d been carrying in her pack–I still had plenty for both of us in my pack. I placed another geocache in the cairn, then we headed back for what would be a shorter and faster hike back to the ATV. In the slickrock area just north of the point we took some time to look near the lithic flakes for arrowheads, and Mark found a nice broken point. We looked around futilely for the other half, then moved along. It had taken about 4.5 hours to reach the point, including the climb up Nate’s Peak, but it took about two hours to return. We rested again at the ATV, then rode a short distance north and checked out Box Flat Cave. 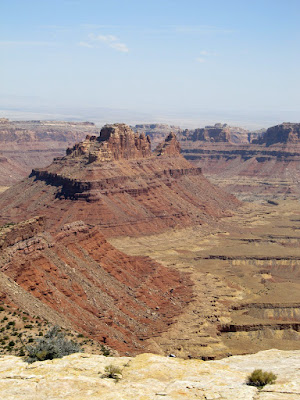 It was my second visit to the cave, and Mark’s first. The cave was carved by water runoff from Jackass Flat, and there was evidence of a large flash flood since the last time I was there. Flood debris on the cave walls reached about five feet high. This time I checked out the middle section of the cave where large sections have fallen out of the roof. I found, at perhaps the highest point in the center of the cave, a hand print that baffled me. It was on the ceiling, in a spot not too difficult to reach but hidden from view unless you looked at it from below at the right angle. I climbed up to look at it, at first thinking it was drawn with charcoal. Instead, it appeared to be some dark pigment applied directly from somebody’s hand, almost like a thin, dark mud, but it didn’t rub off like mud should. I didn’t get a good photo of it because I left my camera on the tripod while I climbed up to see the hand print, and now I regret not bringing it up there with me. I know I’ll eventually go back to see it again. Mark and I left the cave and reached the truck where we had cold beverages waiting for us. It felt great after eight hours and about 10.5 miles of hiking. 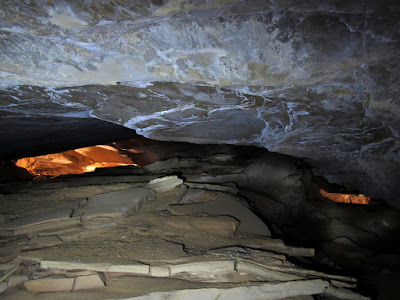 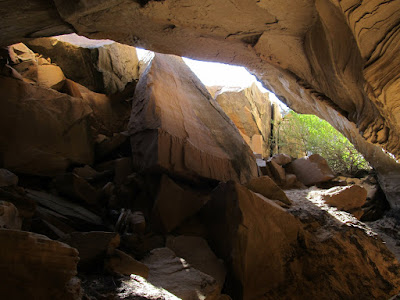