I continued my pursuit of close-to-home forest trails yesterday with a hike up the Bull Pasture Trail. It climbs 2,000′ in elevation over the course of two miles–it’s a steep son of a bitch. In order avoid the heat I got up ridiculously early and began hiking by 6:45AM. The initial ascent was steeper than the rest of the trail. In addition to being steep, the trail was also very rocky. That this trail (and others like it) is open to mountain bikes, while more suitable trails like the Left Fork of Huntington are closed to wheeled travel, perfectly illustrates the Forest Service’s duplicity. On paper they can say they’re supportive of multi-use trails, but on the ground only hoof or foot traffic is tenable. While I watched the sun creep down the opposite side of the canyon, I enjoyed shade for almost the entire ascent. There were a few kinds of wildflowers in abundance, along with several kinds of pine trees, including my favorite, the ponderosa. I’d hoped to see some bristlecone pines but ended up being disappointed. 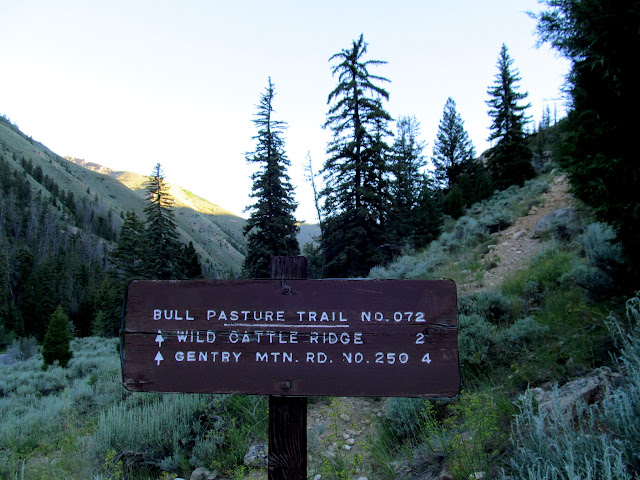 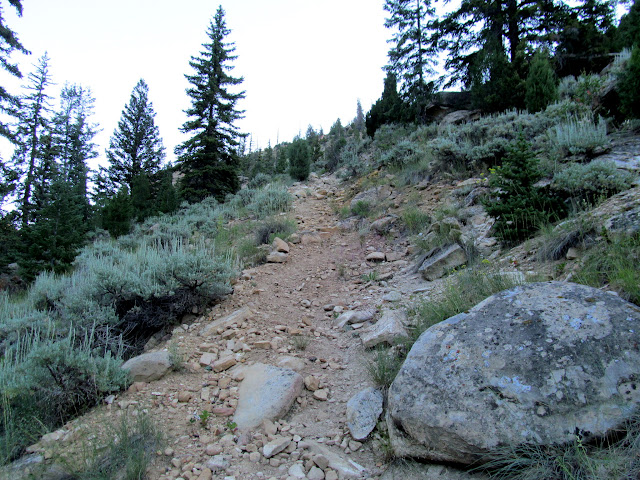 Sunlight hitting the opposite side of Huntington Canyon 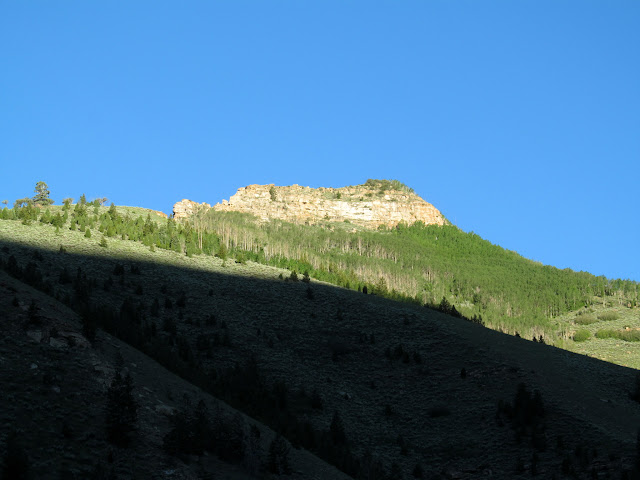 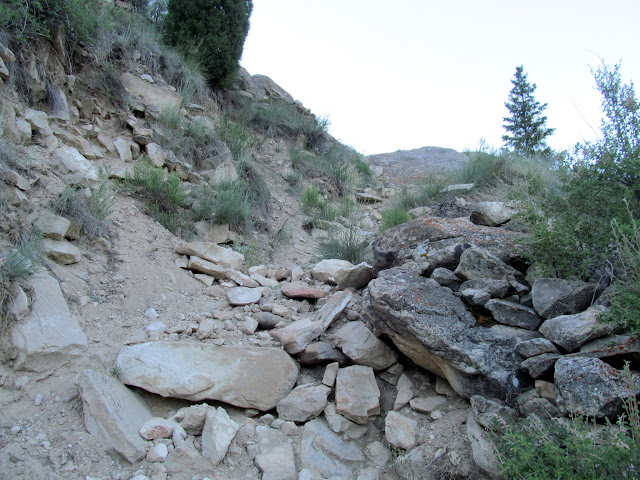 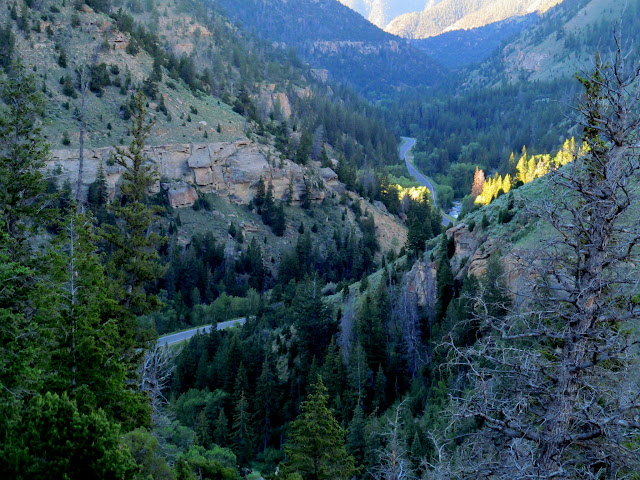 Indian Paintbrush and the sun rising over the ridge 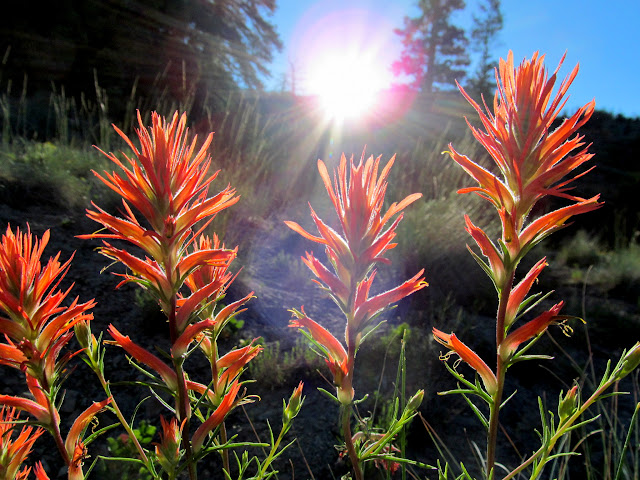 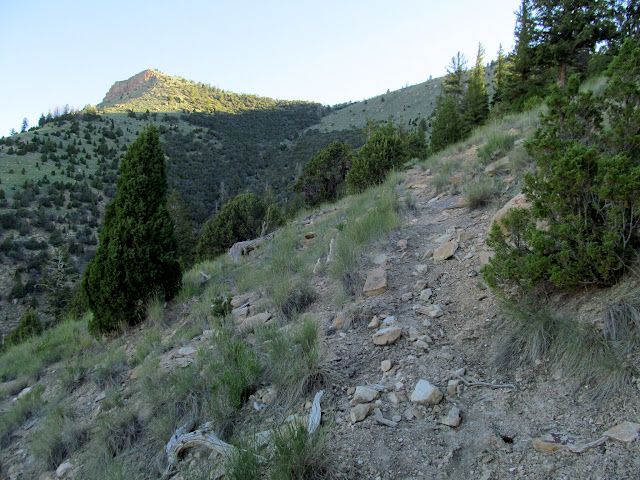 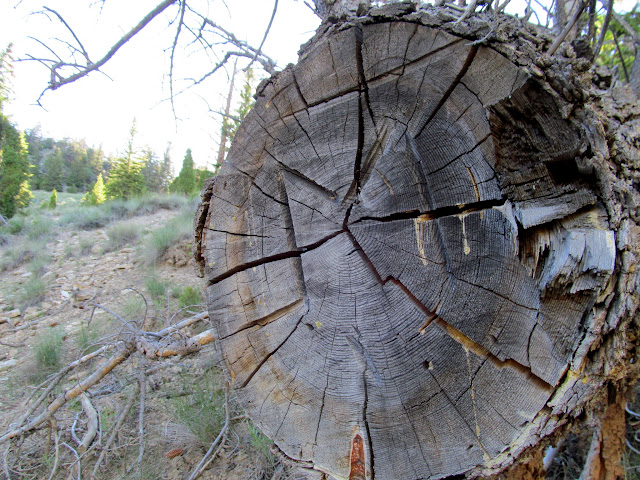 Cairn marking a switchback on the trail 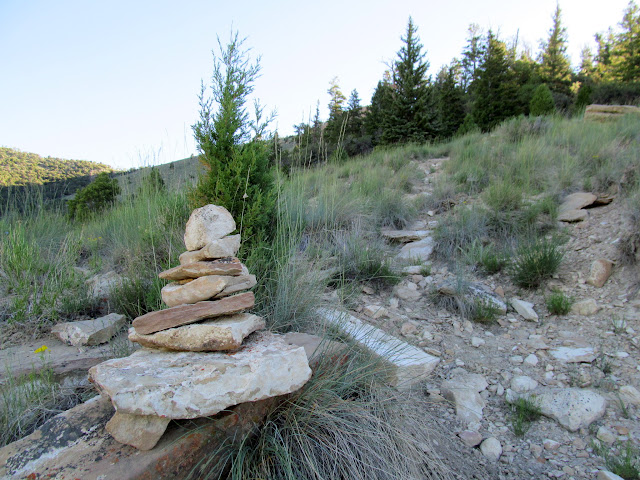 Climbing up a ridge 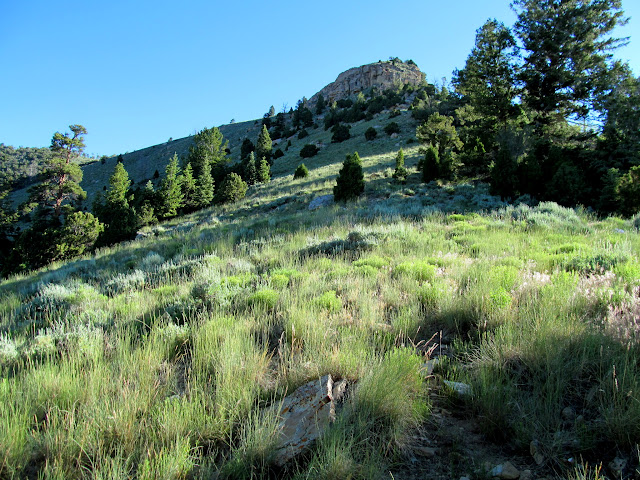 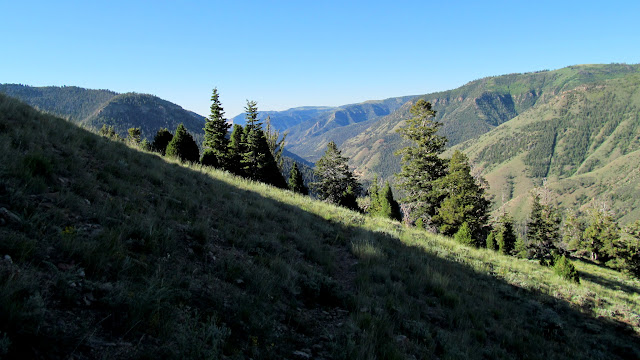 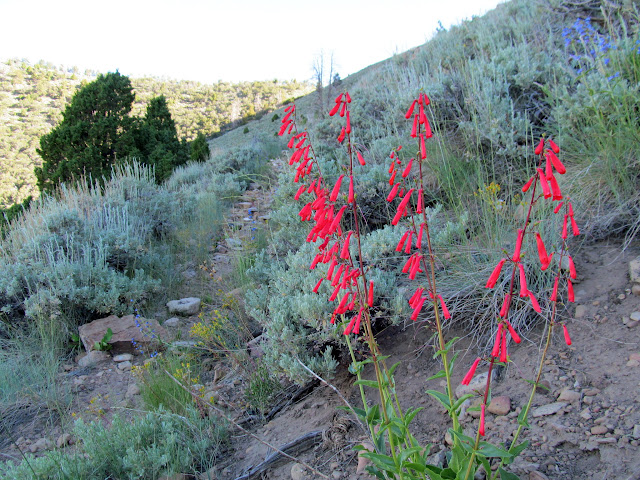 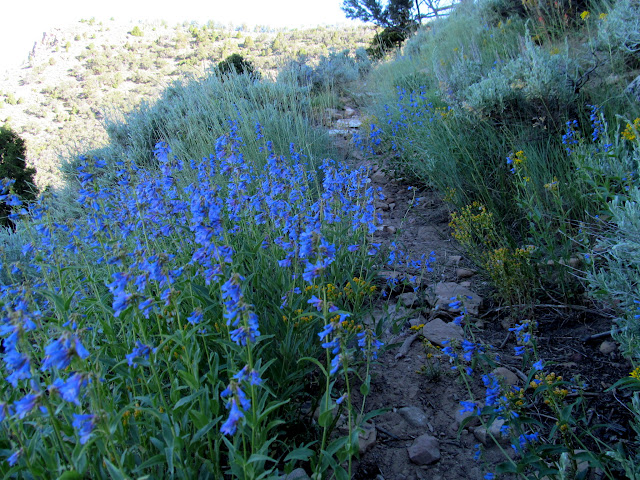 Final climb to the top 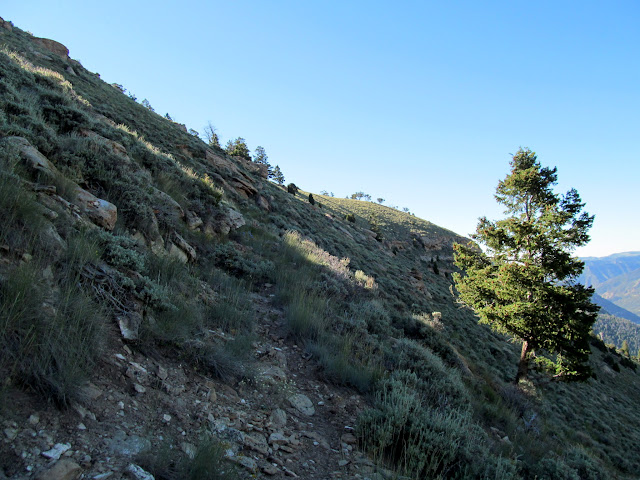 I reached Wild Cattle Ridge where the trail essentially disappeared, and I felt the full force of the sun there. I pressed on just a little farther and higher to point 9,390′. The little knoll was surrounded by trees, however, and didn’t offer much in the way of views. I hiked a bit east and caught a glimpse of upper Huntington Canyon, including the Left Fork and Skyline Drive area where some snow was still visible.

Cairn marking the top of the trail 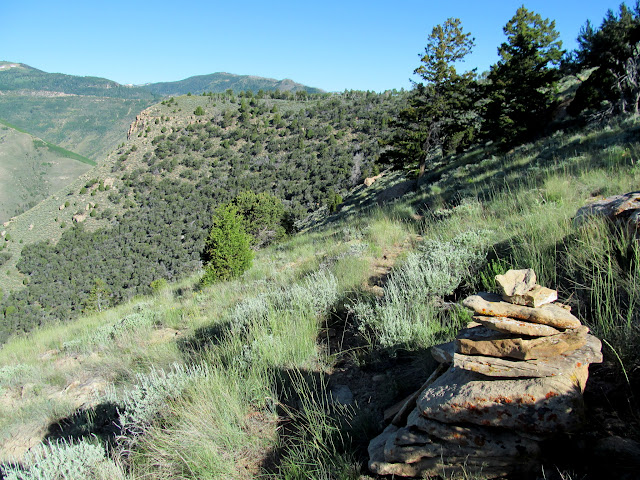 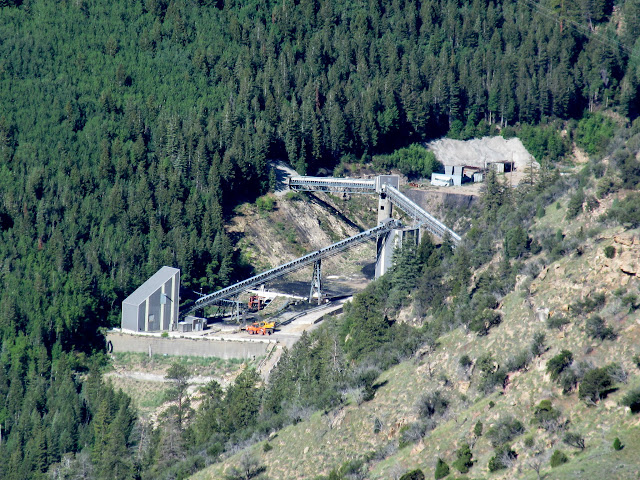 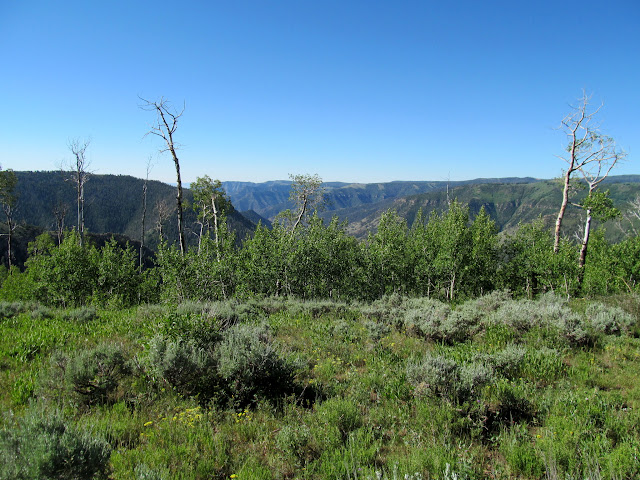 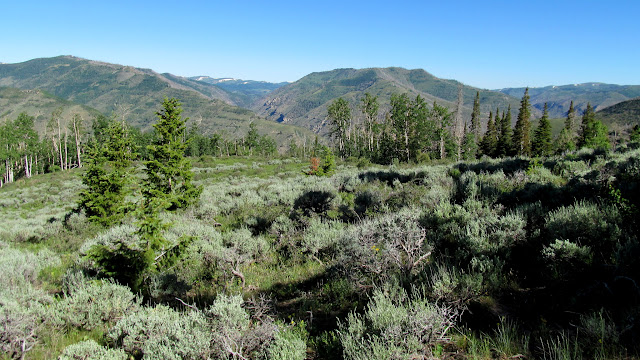 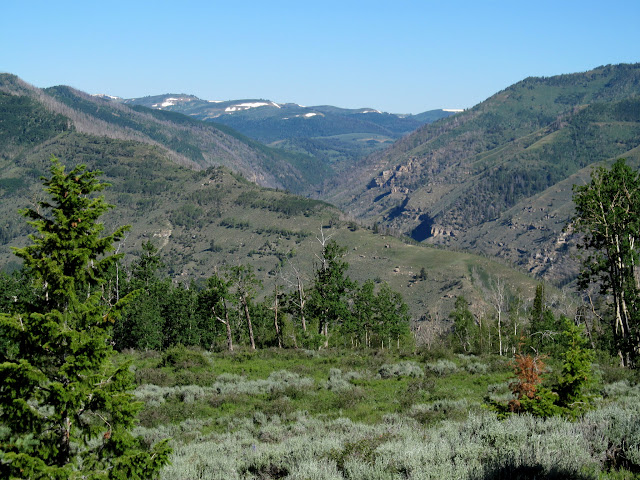 I took a short rest before beginning the descent. The sun had risen enough that I had full sun while hiking back down the trail. Twice I missed a switchback and ended up hiking in the wrong direction before realizing my mistake and finding a way back to the trail. I was soaked in sweat by the time I reached the bottom, even though I’d hardly broken a sweat on the way up. The ascent had taken just under three hours and the descent lasted a little over an hour. My legs barely felt like I’d done any hiking, and I almost did another hike in Ray Grange Hole, but the heat was already too much and I ended up just driving home. I think I’m ready for some Colorado 14ers now!

Heading down the trail in full sunlight 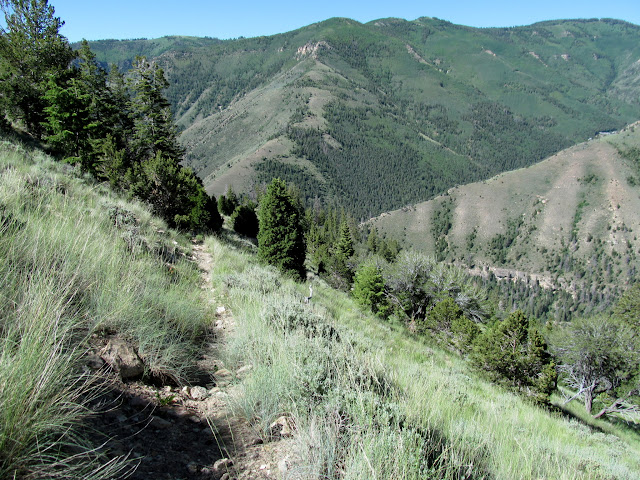 Brands carved into a pine tree with a chainsaw 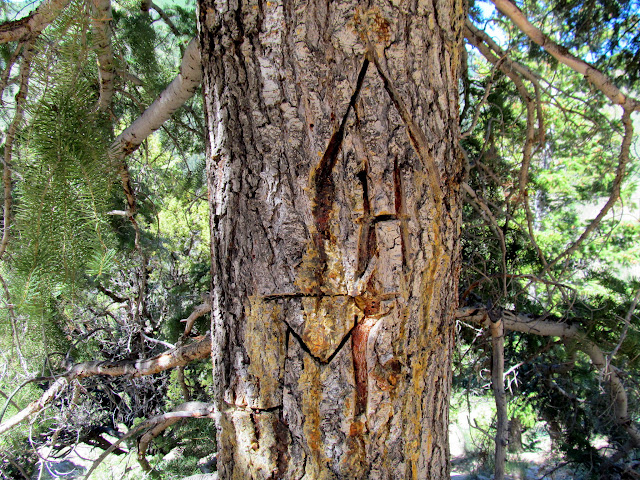 Bottom of the trail at Highway 31 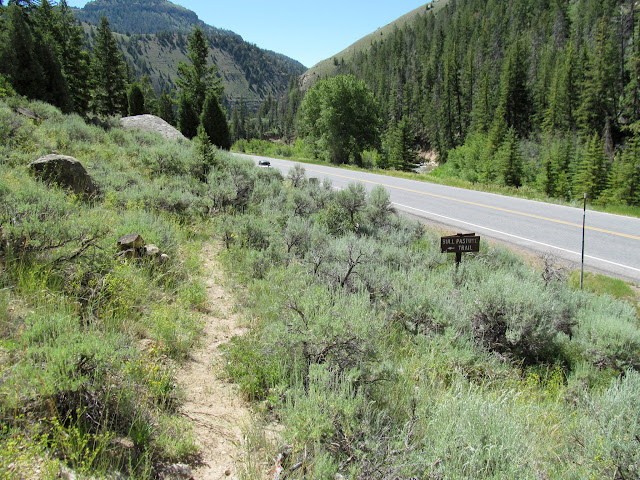