My original agenda for this past weekend was to hike to the highest point on East Mountain, with a short side trip down the Mill Fork Canyon trail to where I’d left off the previous weekend. I ran into snow drifts across the road on East Mountain well short of the trailhead. I could see where ATVs had bypassed the snow by driving over some bushes and through a muddy area caused by snowmelt, but I didn’t want to perpetuate that–especially since there would likely be more snow drifts farther along the road–so I moved on to plan B: Fly Canyon. First I detoured to Potter’s Ponds to check out the damage from last year’s Fly Canyon fire. It wasn’t as bad as I’d feared. The island and south side of the ponds were burned and most of the trees were cut down, but the rest of the shore and campground were untouched. 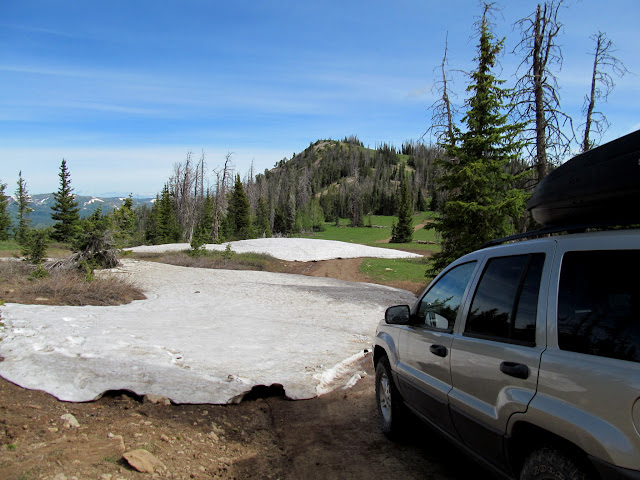 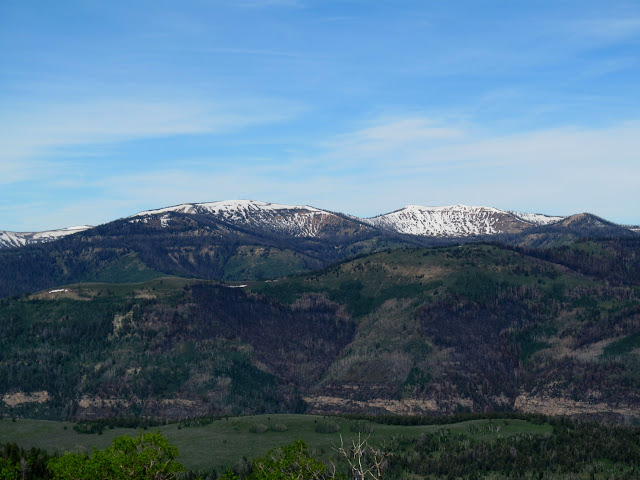 The island at Potter’s Ponds 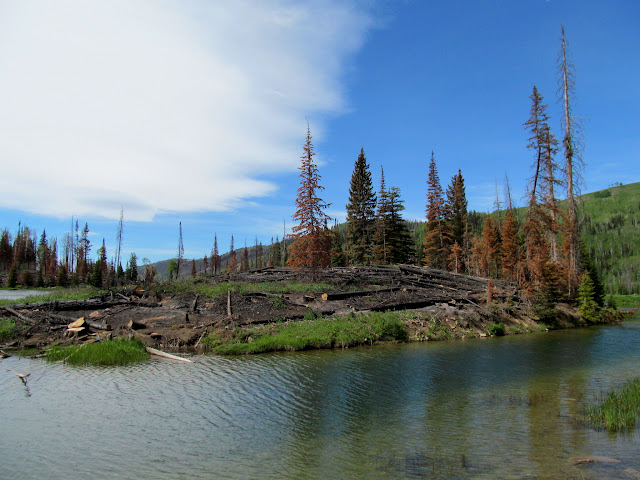 South side of Potter’s Ponds 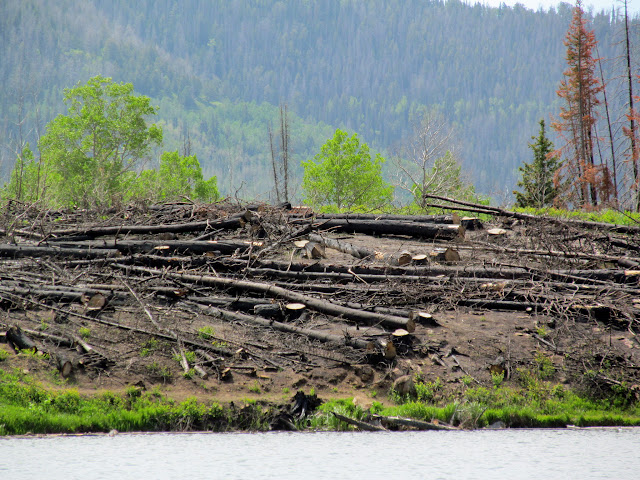 At the mouth of Fly Canyon I checked up on a geocache that I placed there in 2005. There were blackened trees high on the mountain to the west, but the fire didn’t reach the lower canyon and the cache was in good shape. There were somewhat fresh bear claw marks on one of the trees nearby, and a 1950 aspen carving near the geocache that I had never noticed. 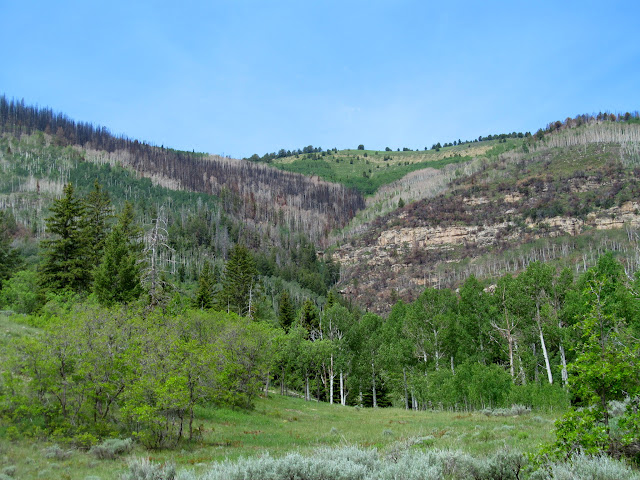 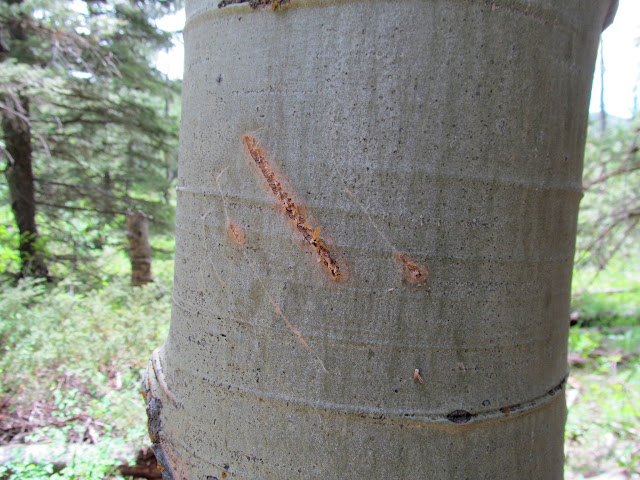 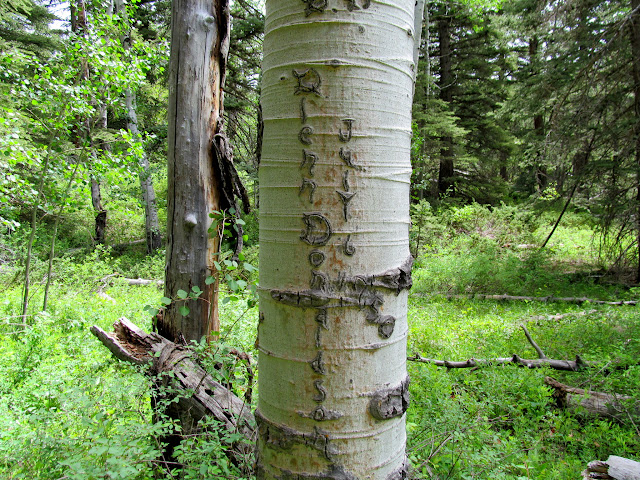 I parked at the Fly Canyon trailhead and started hiking up the old road. The road was bulldozed in the 1940s to reach the heavily-timbered area at the head of Fly Canyon, where a sawmill once stood, and where I placed another geocache in 2006. According to the fire map I should have reached the burn area in the first half-mile of hiking, but I didn’t see any signs of the fire along the trail until I’d hiked a full mile. I was surprised to see two badgers in a den just off the trail. At first I only saw one, with its back to me while it retreated into the den, and I assumed it was a marmot. Then it turned around and another head popped out of the hole. They both stared at me for a minute, but the first step I took toward them sent them scurrying back into the den. I waited silently a short distance farther up the trail hoping they’d peek outside but I never saw them again. 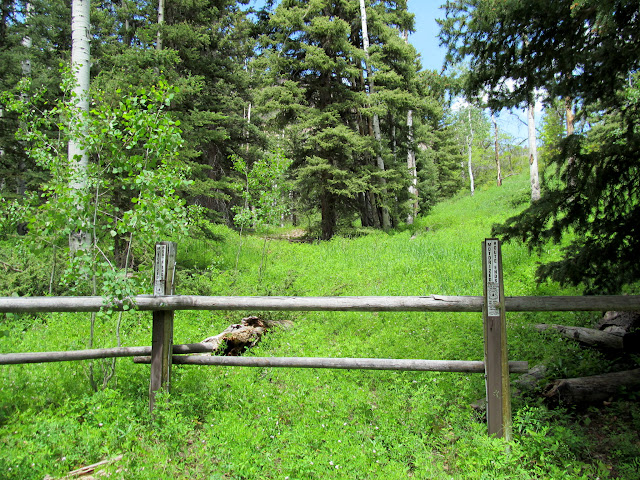 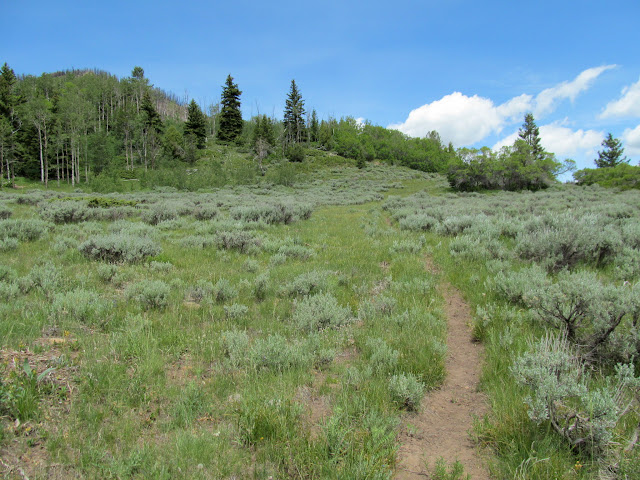 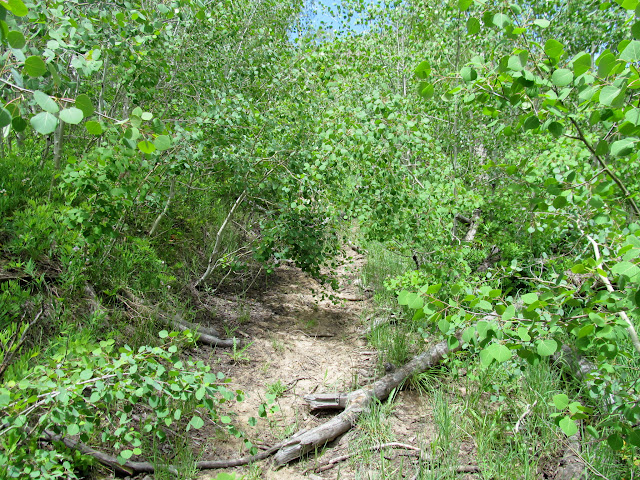 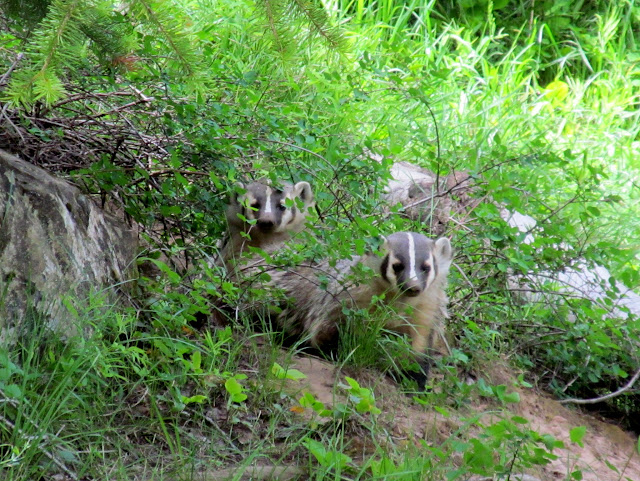 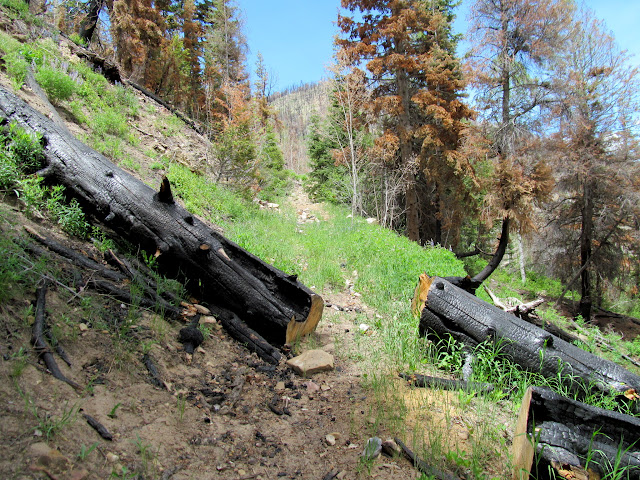 I hiked through alternating scorched and untouched areas, but eventually nearly everything I could see had been burned. There were patches of green where ground plants and even wildflowers were thriving. I neared the clearing where the sawmill used to be and I was pleased to see that the small stand of pines where I’d hidden the geocache were unburned. One of the trees had been affected by the heat and many of the needles were brown but the trees hadn’t ignited. The geocache container looked good from the outside, and inside the only damage was a slightly melted plastic bag that held the logbook. I only spent a few minutes looking around the old sawmill area before heading back down the trail and then home. It wasn’t as long a hike as I’d been hoping for, but getting out of the valley heat and into cooler temperatures in the mountains was a welcome relief for a while. 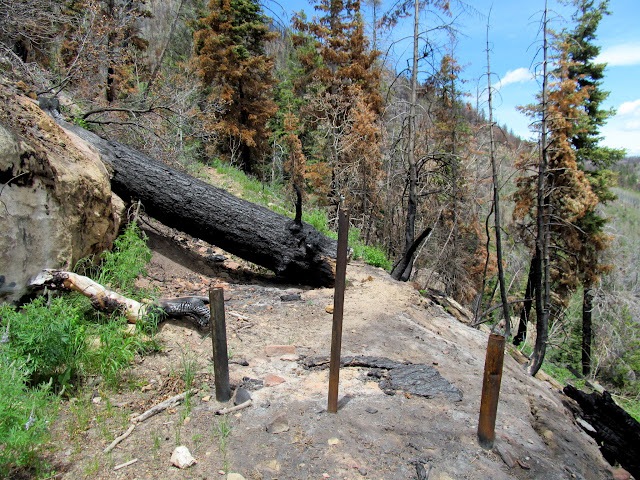 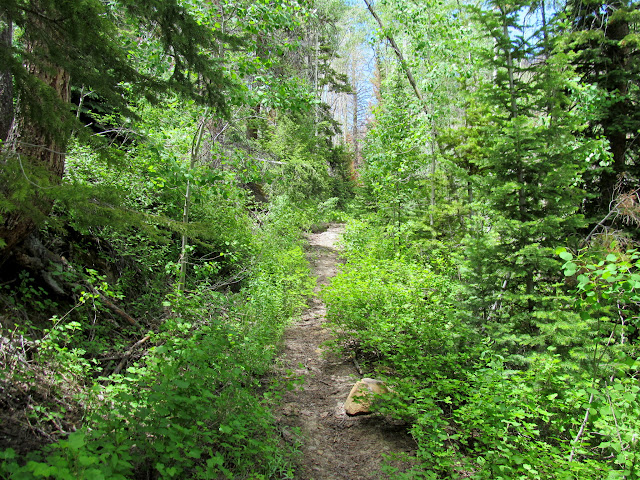 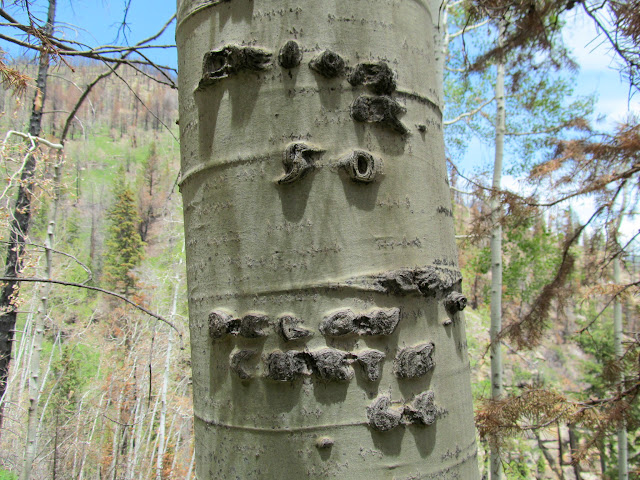 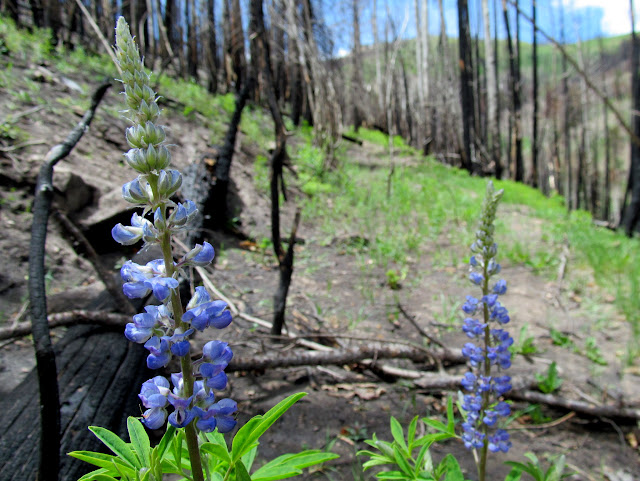 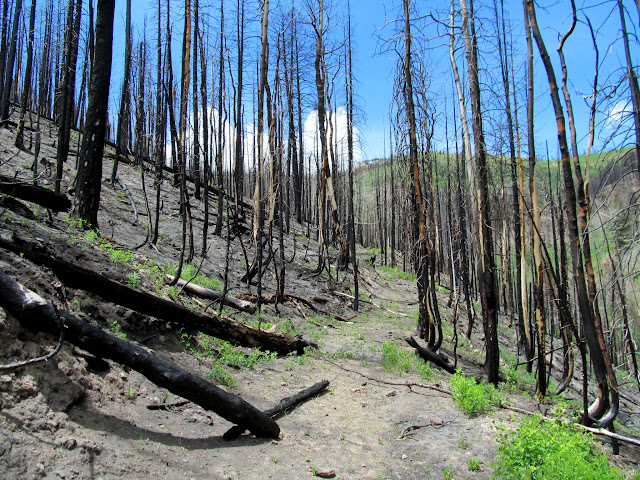 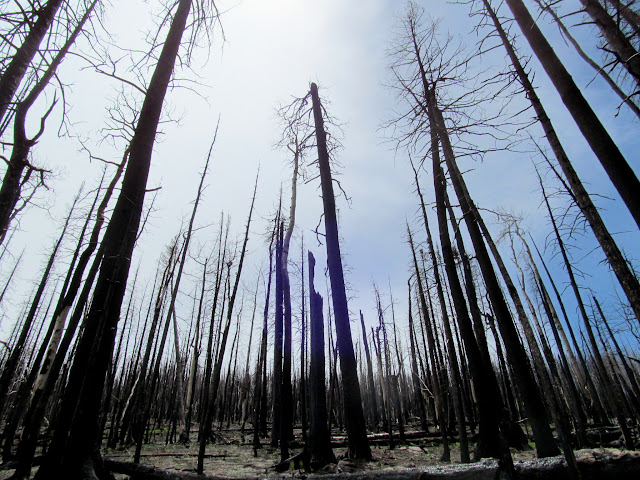 New growth on the trail 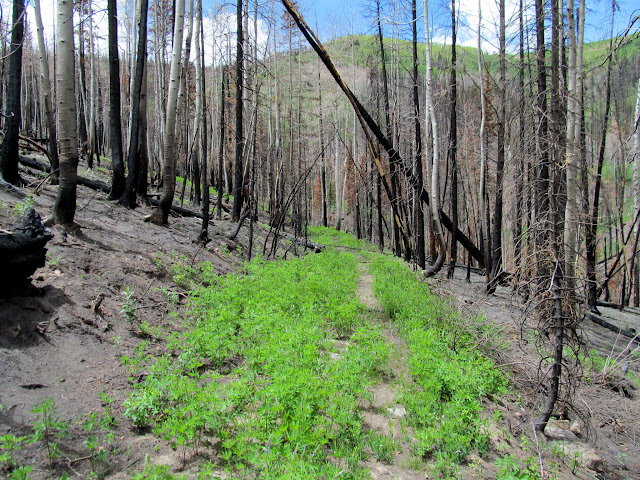 Trees (center) where the geocache is hidden 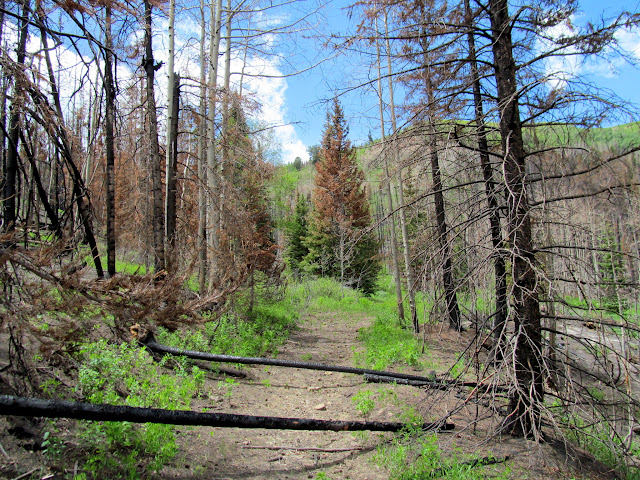 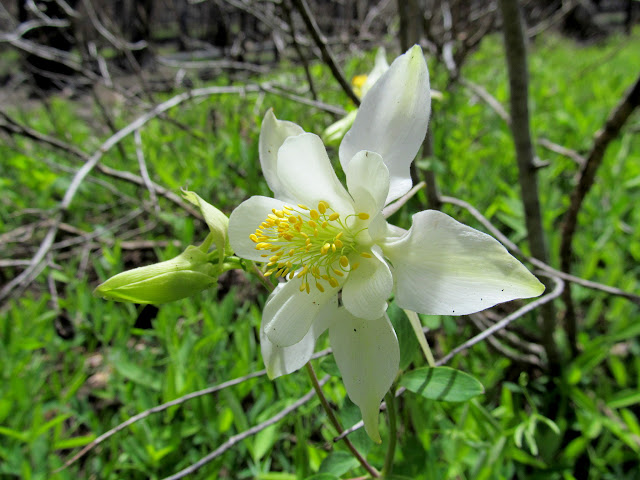 Geocache container hidden in the rocks 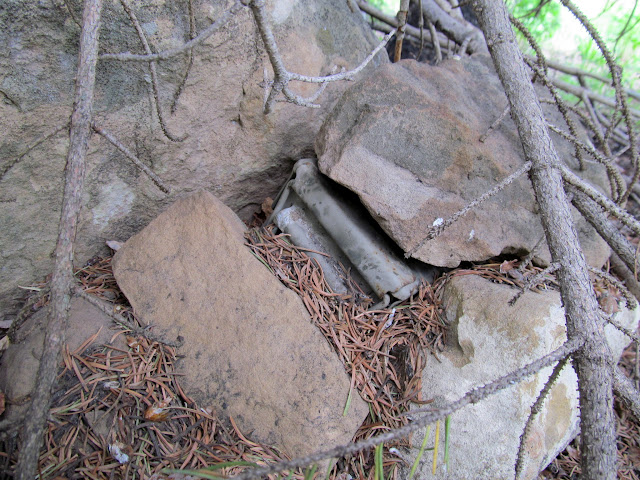 The geocache contents are mostly safe 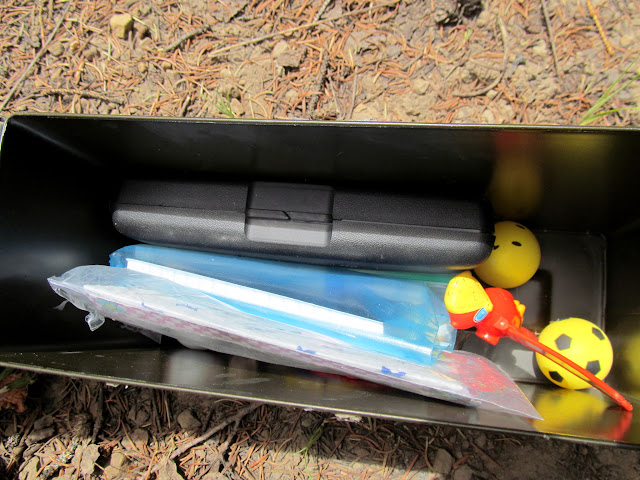 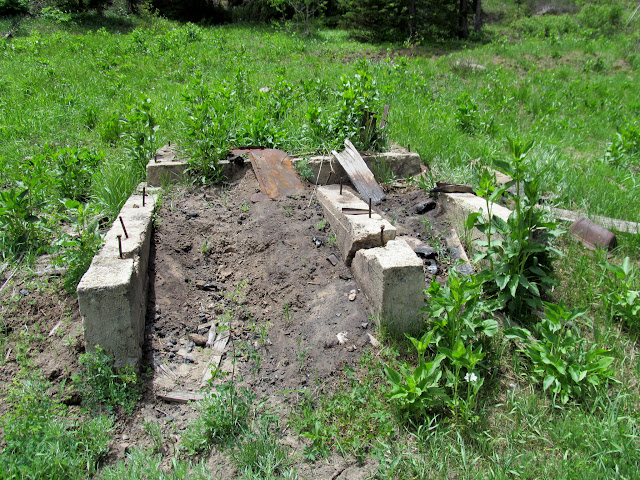 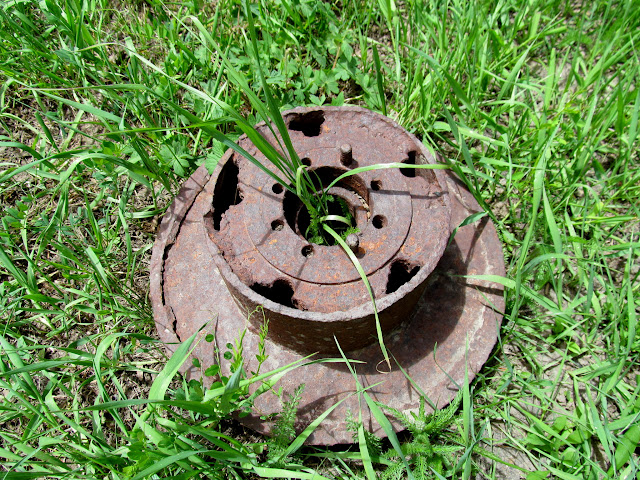 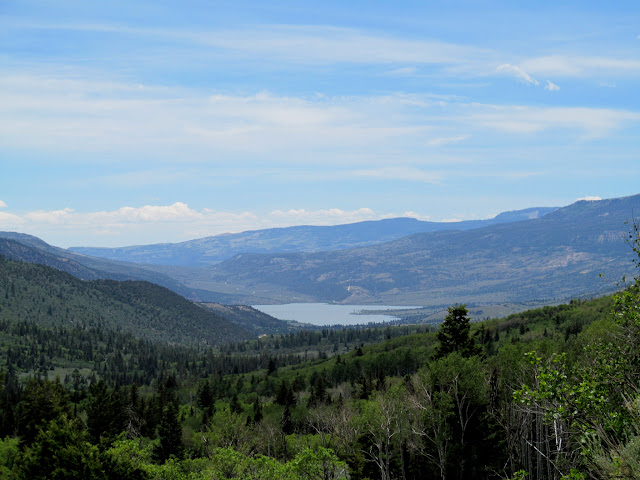 Jeep parked at the trailhead 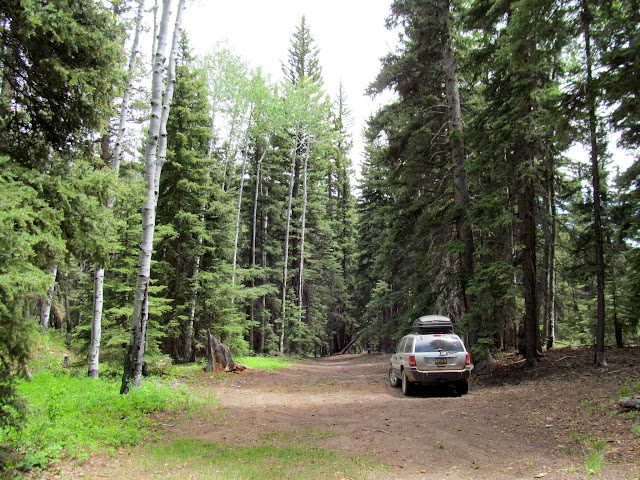