On Saturday, September 17, I went with Alan on my second hike into Hidden Valley near Moab. My first trip to the area was last December and I was unable to climb up to the ruins due to snow. This time I was hoping to make the climb in dry conditions and also to see some rock art up close that I’d only seen through binoculars before. We got an early start and arrived at the trailhead just before the sun rose. Orange light spilled down the cliffs as we ascended the trail into Hidden Valley, and upon nearing the top of the trail we were bathed in full sunlight. It had been a pleasantly cool climb.

Early morning light on the cliffs above Hidden Valley 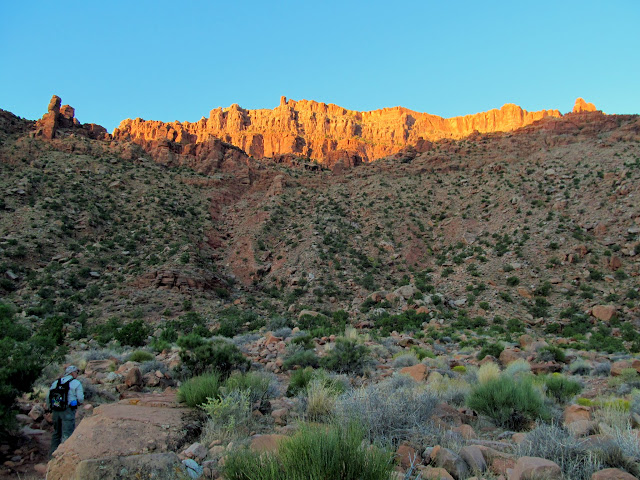 Nearing the top of the climb into Hidden Valley 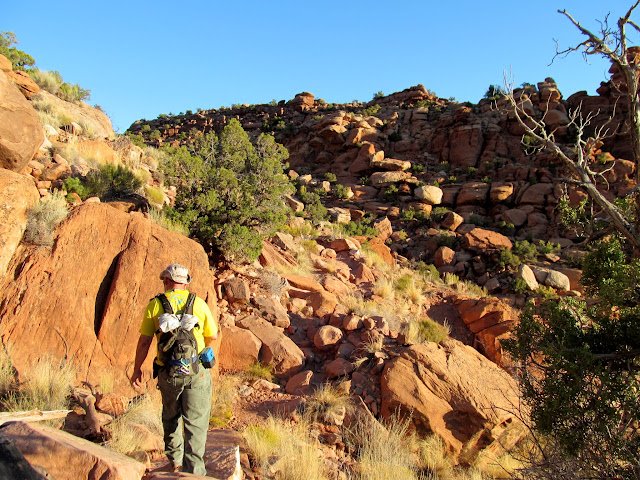 Hidden Valley was carpeted in dry grasses, with multiple old and new trails visible across the otherwise flat terrain. Alan and I reached the divide between Hidden Valley and the Moab Rim area, which is about where the rock art begins. From there, we followed the base of the cliffs and photographed the rock art. With this being my second visit, I took less than half the number of photos that I had on my first trip. 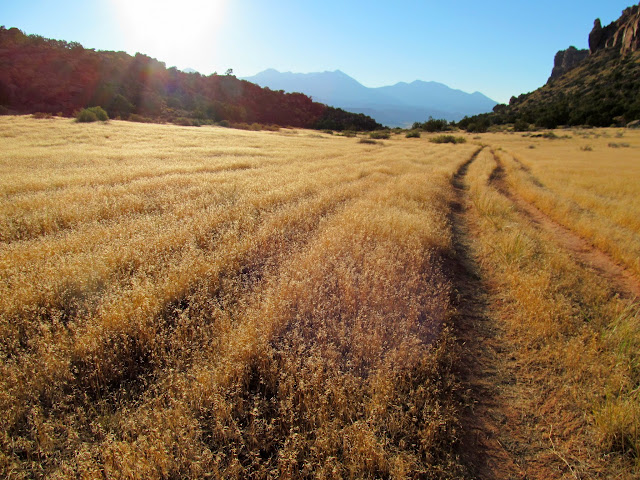 Hidden Valley viewed from the divide 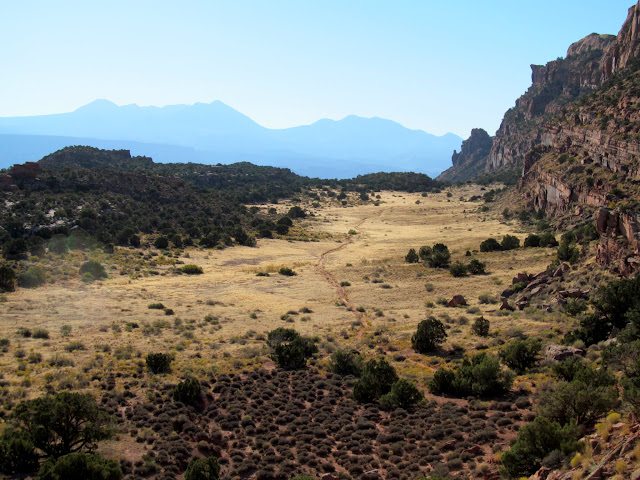 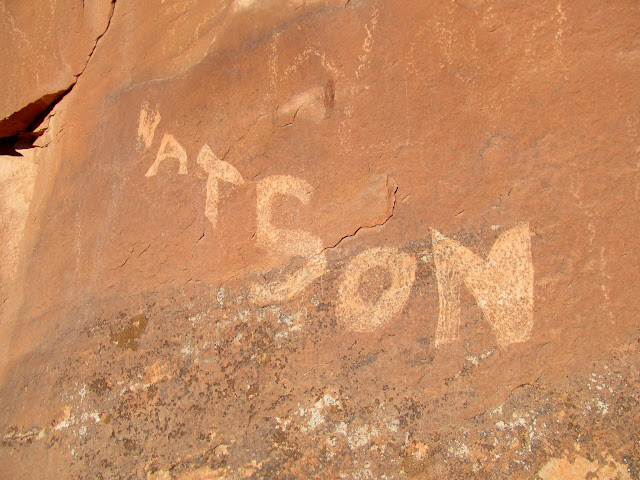 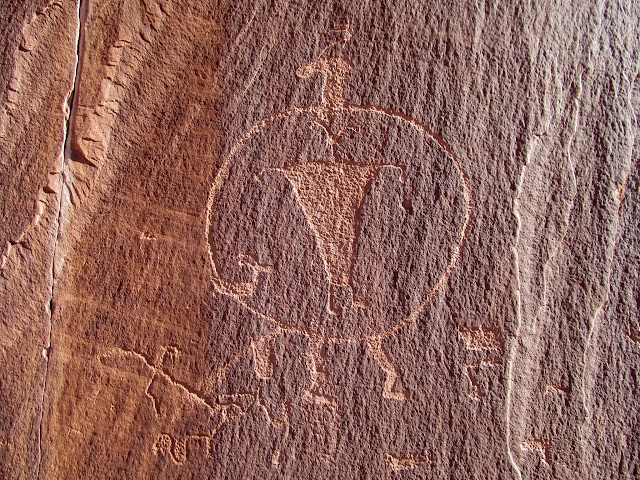 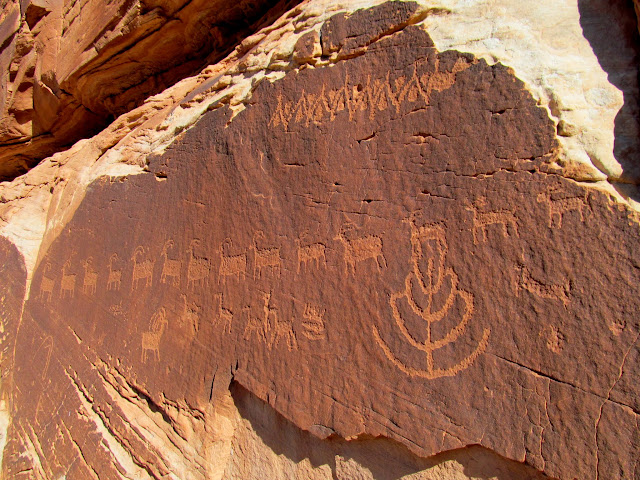 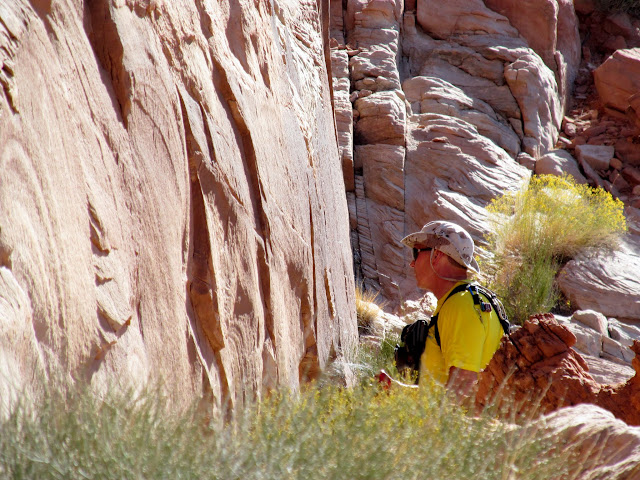 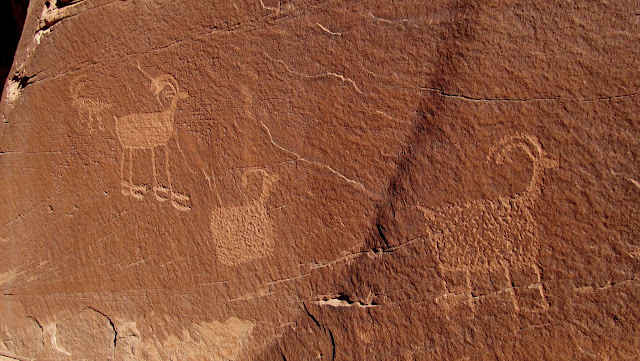 I spotted some petroglyphs this time around that I’d missed earlier, though they were nothing spectacular. Alan and I were able to climb up to both of the ruins. Each is a circular wall, probably a lookout of some sort, perched atop a narrow ridge with cliffs on all sides. To access each one we had to climb up through narrow cracks, one of which was almost too narrow for me to squeeze through.

Anthropomorphs connected by the horns 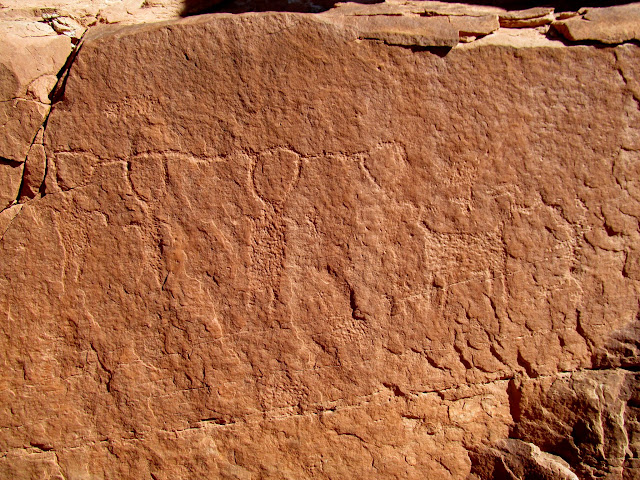 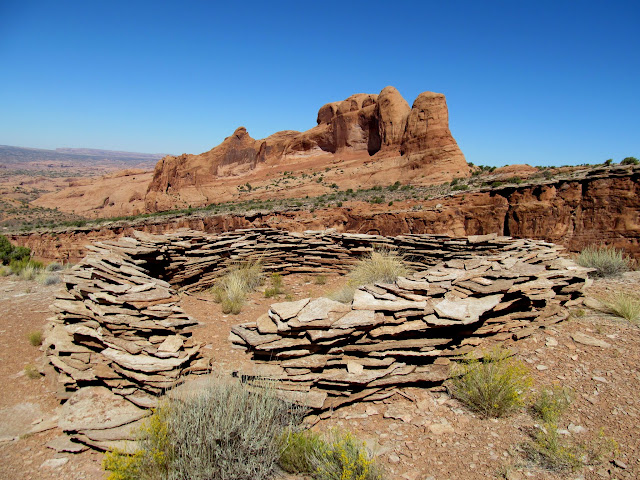 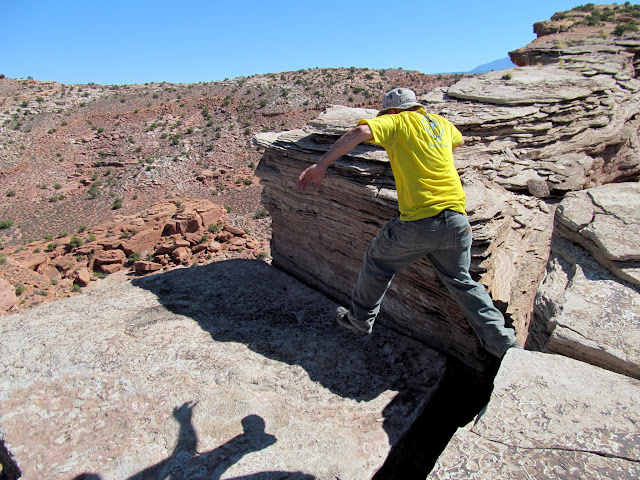 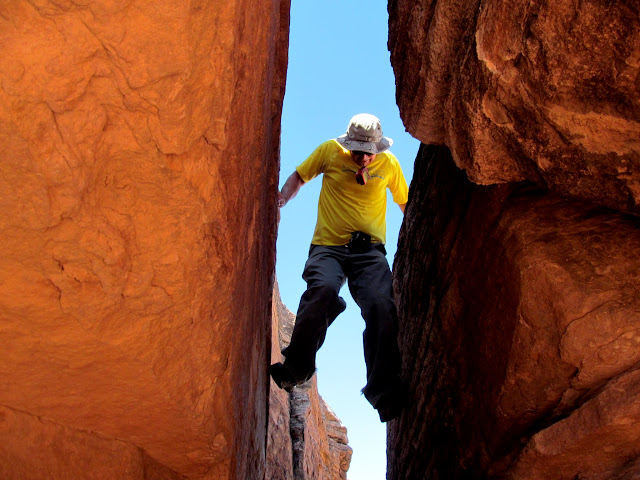 Climbing up to another ruin 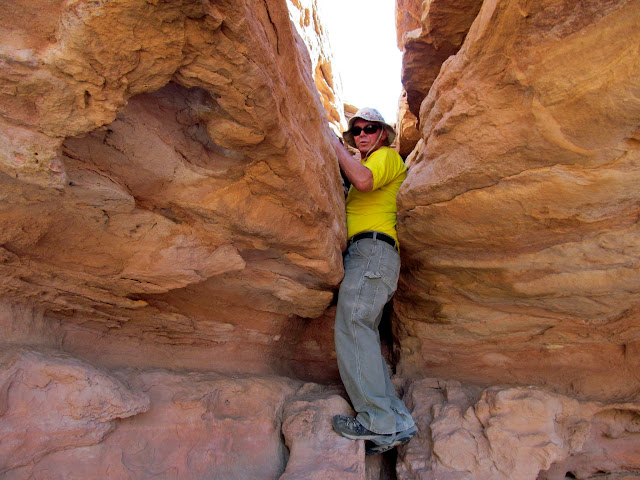 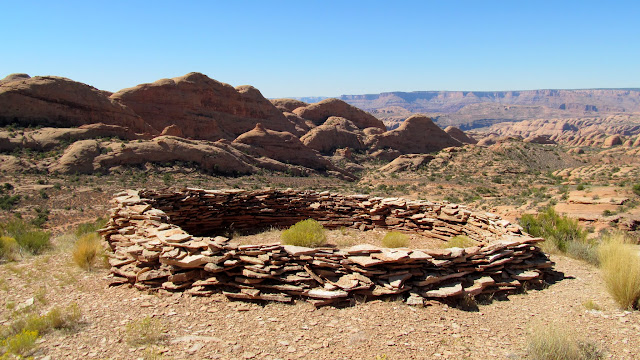 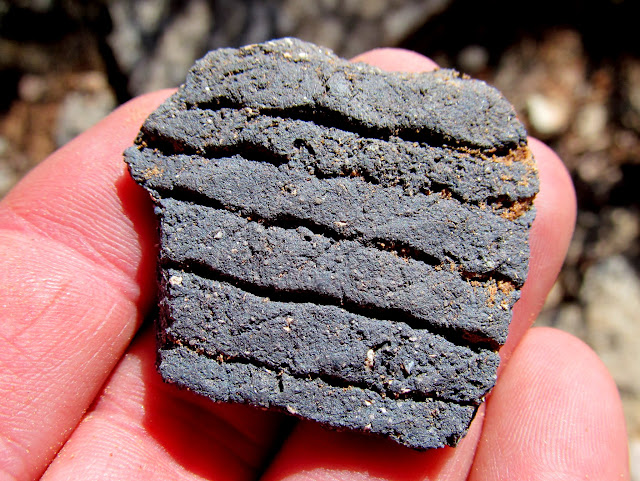 We made one final stop on our way out of Hidden Valley. On my previous trip I noticed a large deer petroglyph across a small drainage from the main rock art area but didn’t have time to visit it up close. We checked it out this time and noticed some details I hadn’t seen before. Just below the deer’s belly were several faint hunchback figures. It was a cool but unusual pairing of animal and human figures. 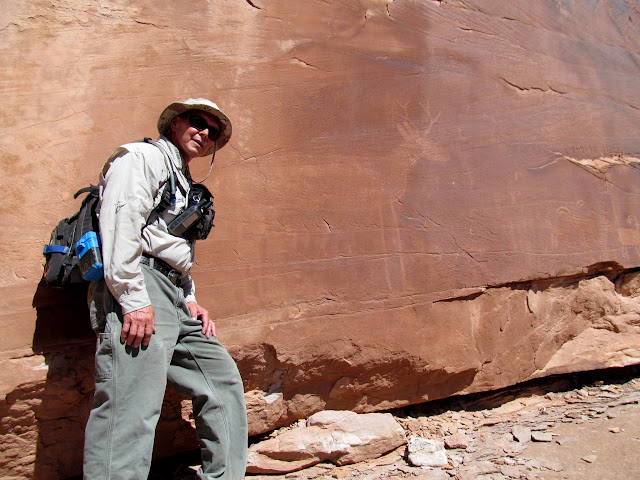 Faint hunchback figures below the deer 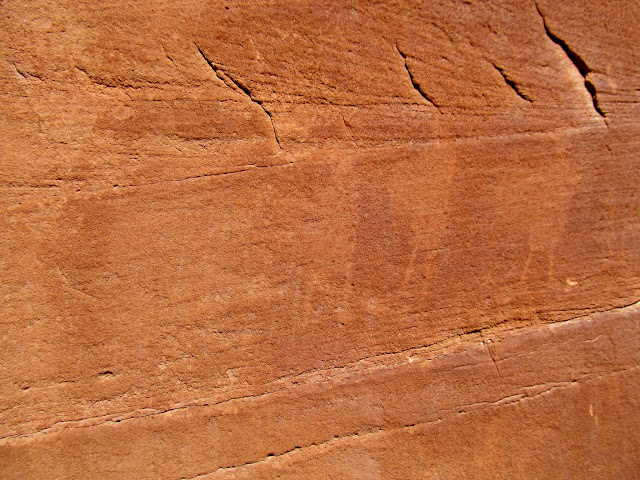 It was fairly warm as we hiked out of Hidden Valley, and back at the trailhead my GPS registered over eight miles during the hike. The difference in conditions between my winter hike and this early fall hike made it seem like two vastly different hikes despite following nearly the same route.

Heading back down Hidden Valley 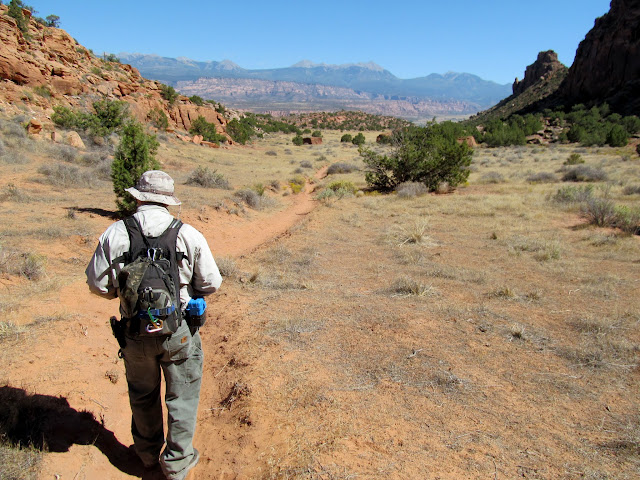