Summer heat has kept me away from the desert the last few months. With somewhat cooler temperatures on Labor Day I was able to take a long wander through the desert. I wanted to hike somewhere well off the beaten path, but still with a good chance of discovering something interesting, so I ended up hiking some minor forks of upper Spur Fork. I parked just off the road that goes north through Hans Flats, then hoofed it across the flats toward a fork of Spur Fork that’s flanked on one side by cliffs topped by huge sandstone domes. The opposite side of the drainage had a shallow sandy slope, but I stuck to the cliffy side looking for scratches in the rock. I found next-to-nothing.

View along a small drainage toward Spur Fork 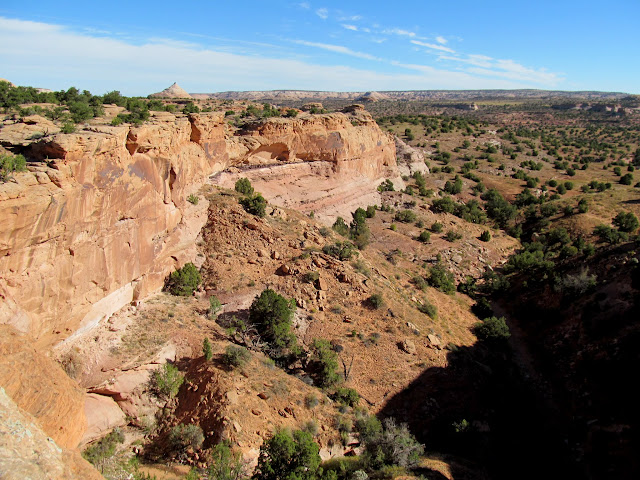 Following a burro trail, replete with their crap 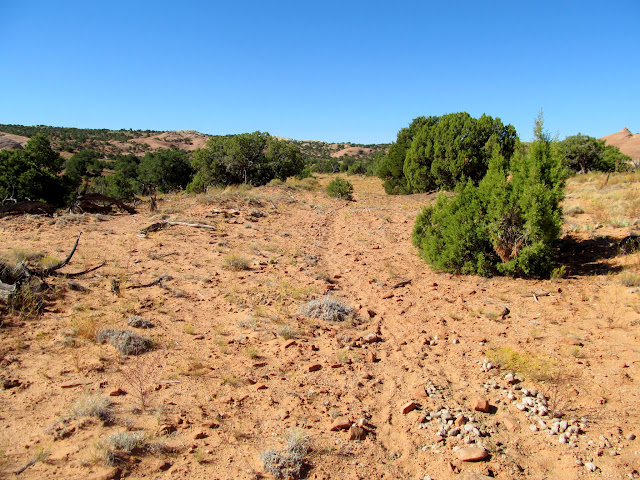 Sunflowers at the head of a small canyon 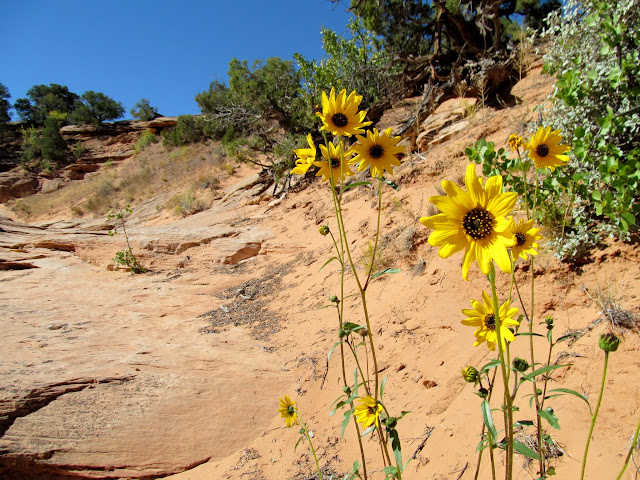 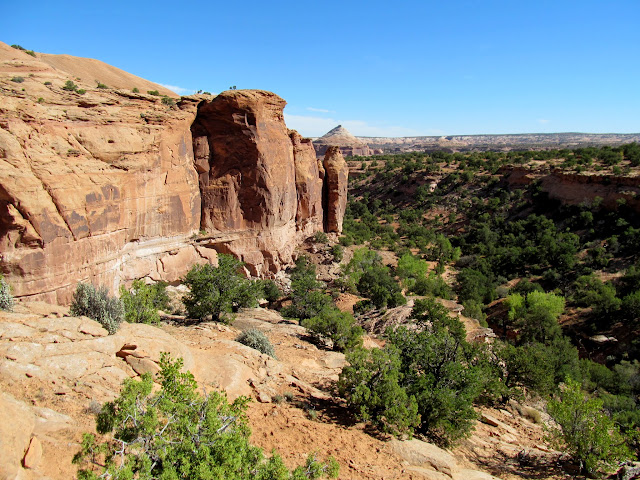 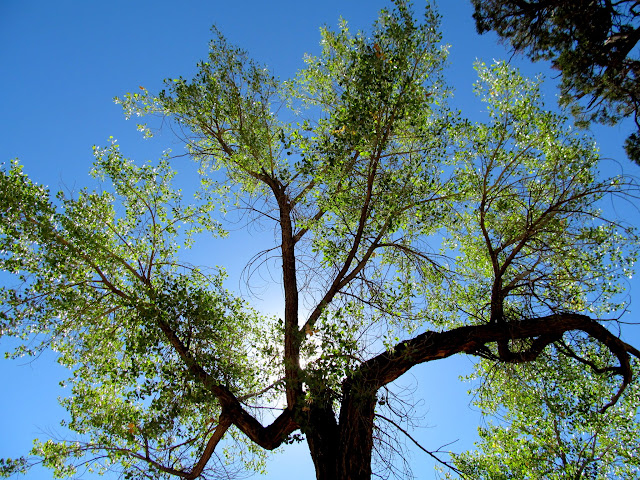 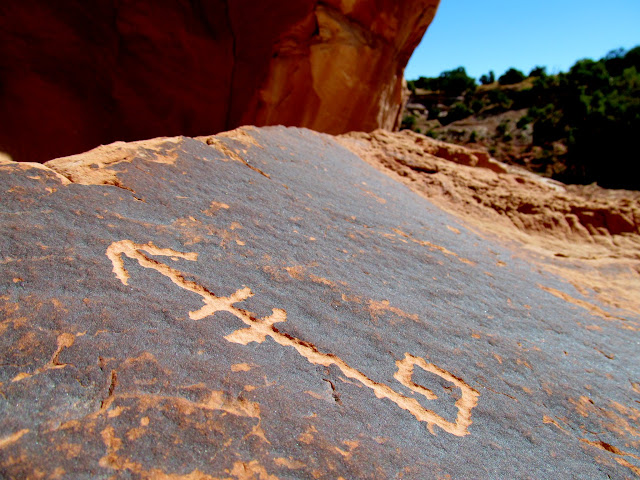 Just before reaching a point where the cliffs ended I saw some bear scat on the burro trail I was walking along. Shit! At least it was dried out and old, and there were no tracks nearby. It still put me on edge. There were two writings on the point where the cliffs ended. One was by “H.M.” from 1937, and the other said “R.R.R.” with an arrow pointing southwest, almost directly toward the Robber’s Roost Ranch. I walked around the point and headed up several small forks of the canyon that each ended in a dryfall. Enroute to the first fork I inspected a couple of overhangs. One was devoid of any writings or artifacts, while the other looked very promising. All I found in the latter was maybe a broken grinding stone. 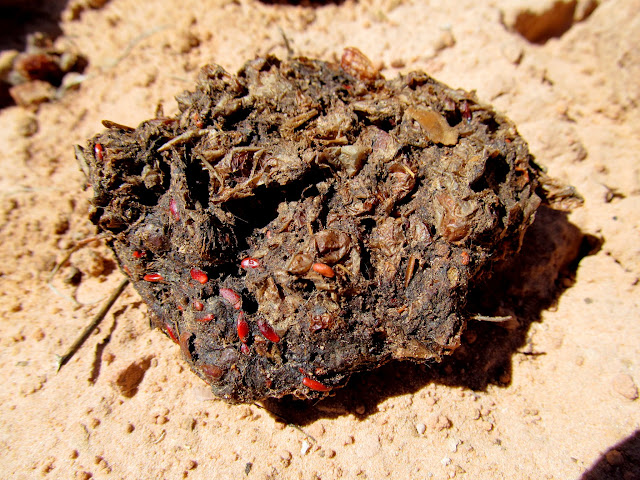 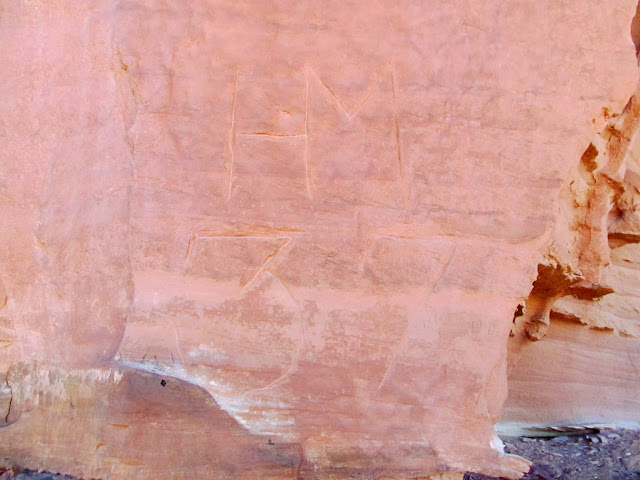 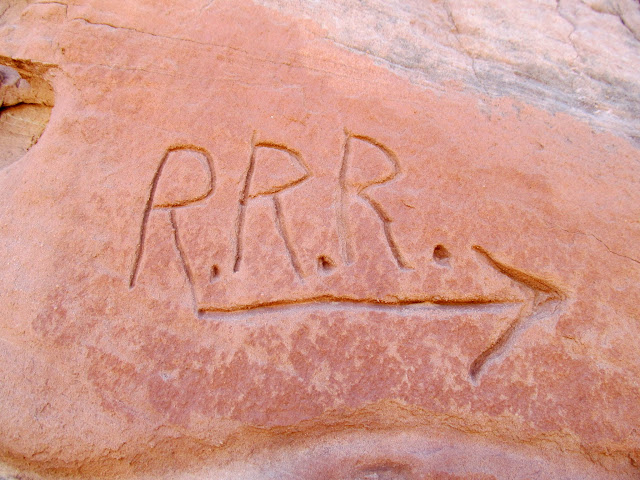 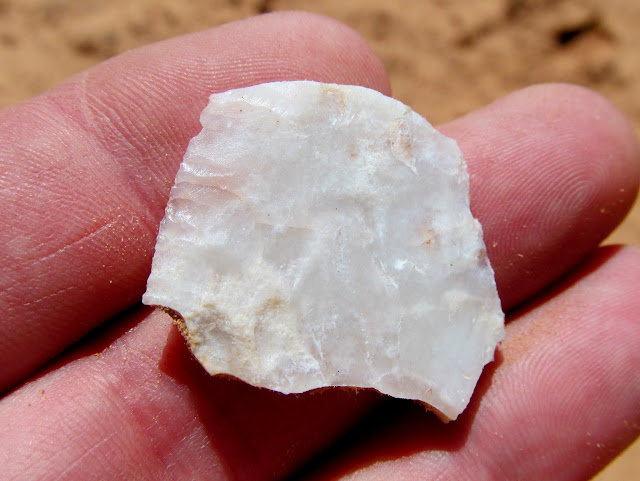 One of several overhangs that I inspected 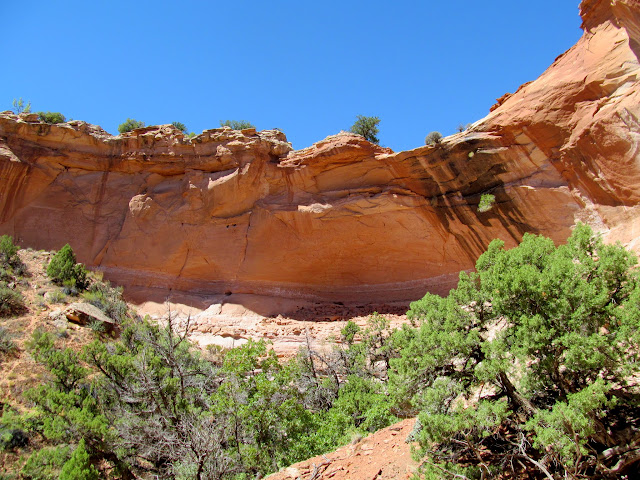 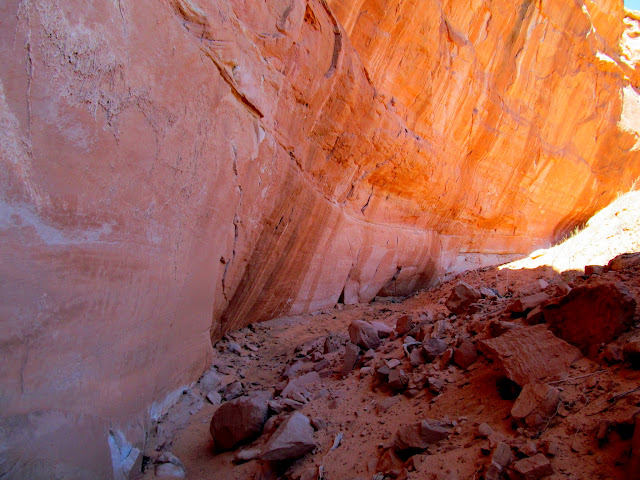 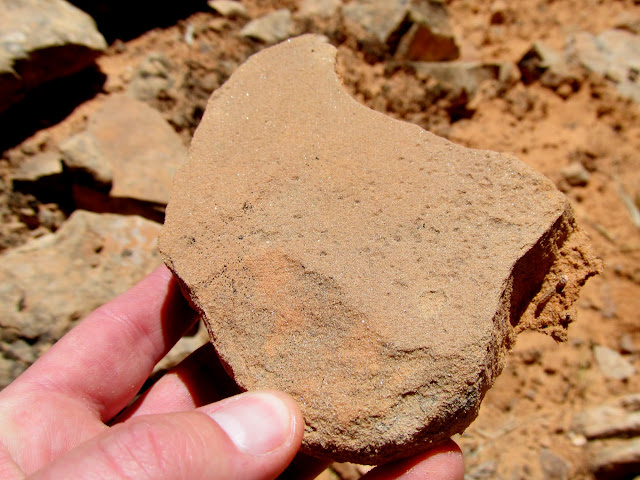 All the branches of this side canyon had thick vegetation below the dryfalls and I only fought my way close enough to scan the cliffs with binoculars, but I found nothing in any of them. Well, except for more bear scat. I’d already hiked over five miles and it was uncomfortably warm–warmer than I was expecting. I took a direct route back to the Jeep by returning to Spur Fork and crossing to the east side, then following an old road to the south. Right where the road climbed out of Spur Fork was a very long (~150′) and thick cable that must have been left there by the dozer crew that pushed the road through. I heard some wild burros braying well before I could see them. All but one saw me and skittered off before I was close enough to get photos. The burro that remained just stared me down without making a move.

Old fence used to corral stock in a box canyon 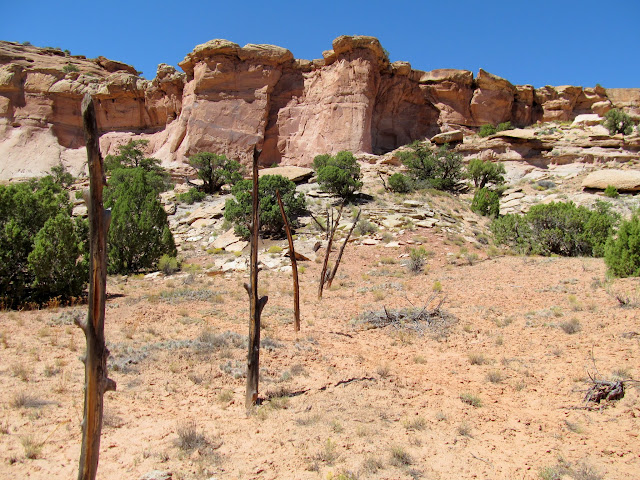 Heavy vegetation below a dryfall 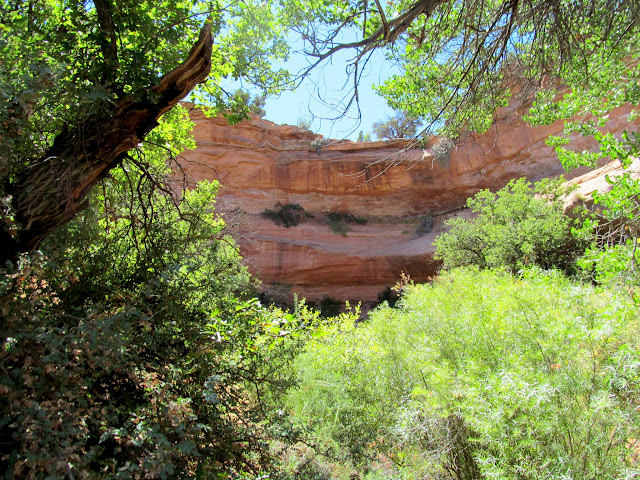 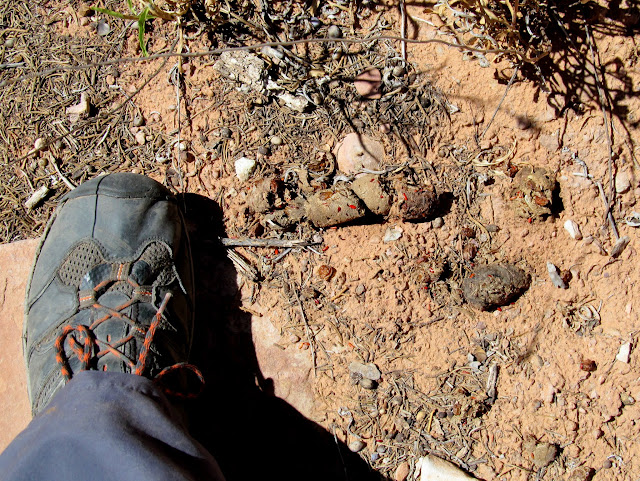 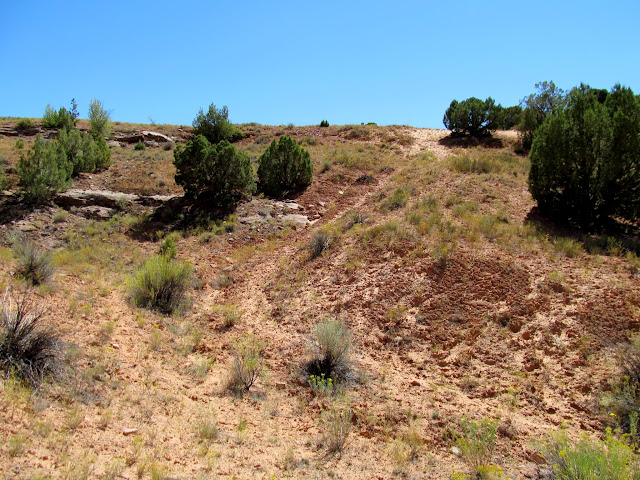 Burro trail on an old road 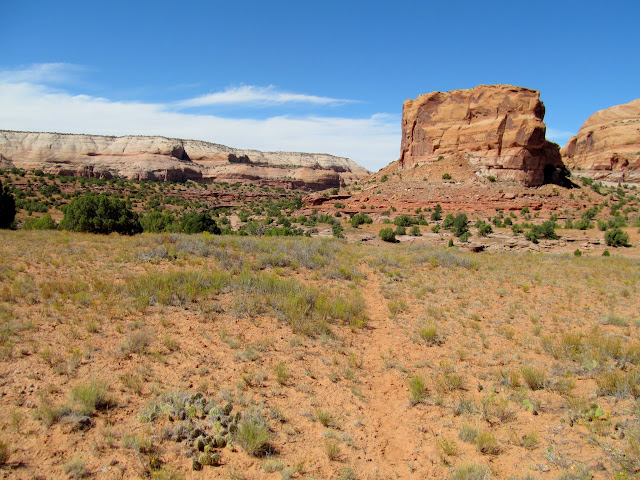 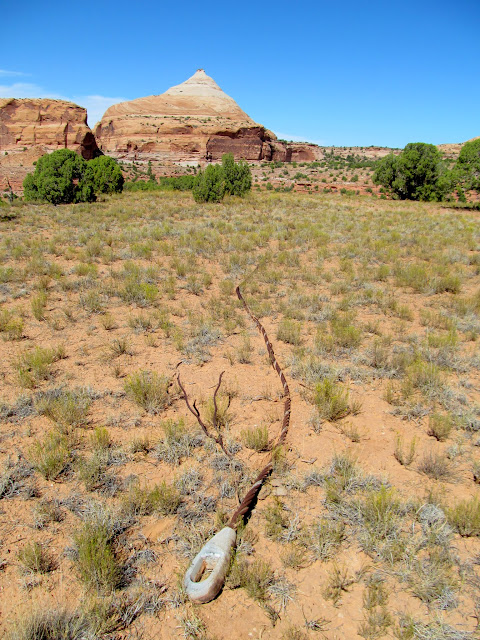 Peekaboo with a burro 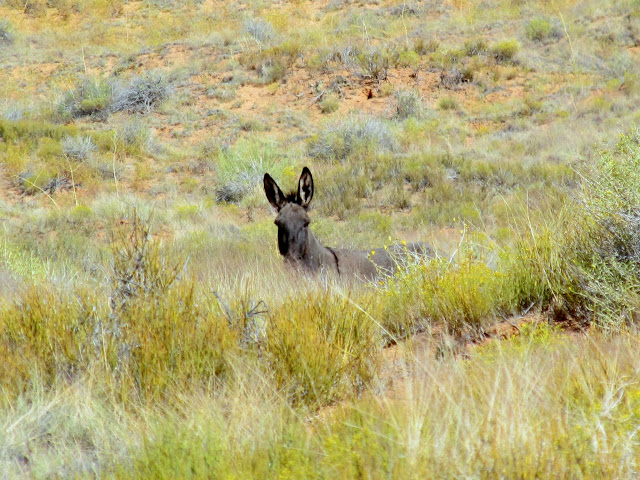 I finished walking the old road and then followed burro trails the rest of the way back to my waiting vehicle. When I explore without a particular goal in mind, more often that not I do find something interesting enough to justify the effort. I’d hike over nine miles this trip and hadn’t seen much of anything to make it worth my while. Such are the risks of random exploration.

Back to my trusty steed 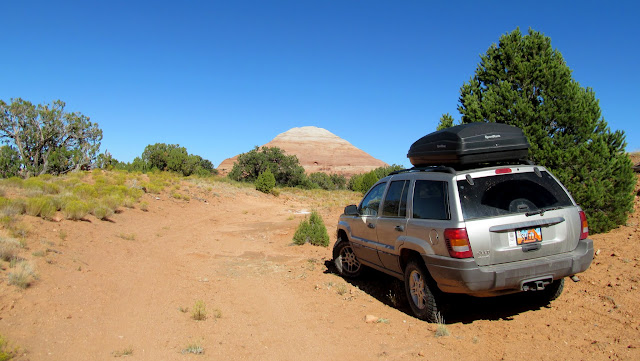 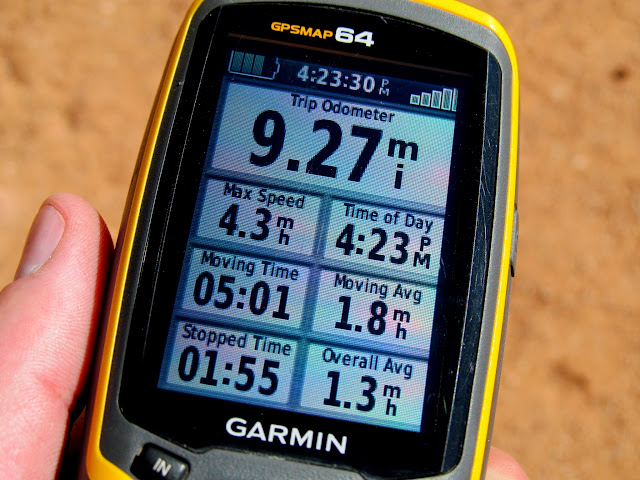