Randy set this trip into motion in mid-April, and Alan made it possible by securing access to the private property that we’d be entering to visit Warrior Ridge in Nine Mile Canyon, which holds some of the best rock art in the Nine Mile area. Many fighting scenes adorn the cliffs and give the ridge its name. On the morning of Saturday, May 21st, Alan and I met Randy and Diane in Wellington and we headed into Nine Mile. Upon arrival at our destination our first order of business was to figure out where and how to cross the creek. At first we tried to gather materials–fallen trees and discarded planks–to build a bridge but it proved too sketchy. Instead, we just changed into sandals and forded the creek on foot. All, that is, except me, since I forgot to bring sandals. I went barefoot. Once across the creek we climbed up a trail onto the lower part of Warrior Ridge to where a couple of pit houses once lay.

Climbing up to Warrior Ridge 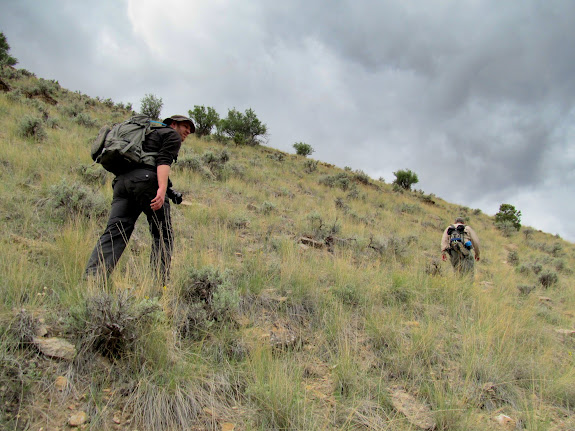 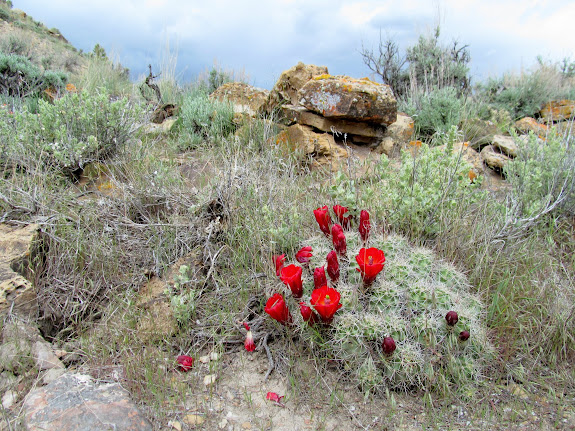 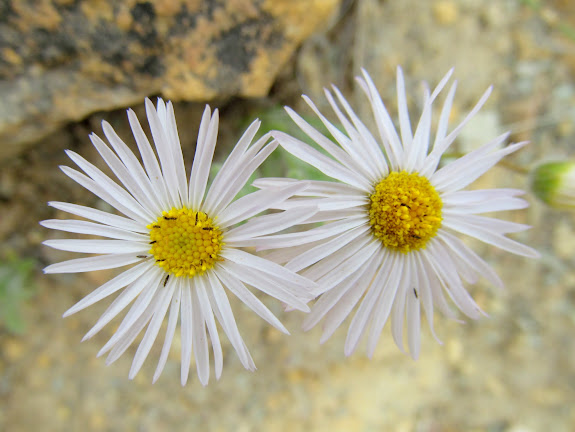 Higher up the ridge we encountered the first petroglyph panel. It was a large panel with both big and small figures, some depicting fighting scenes and some hunting. Here a group from Colorado caught up to us and we chatted briefly before hiking ahead of them. 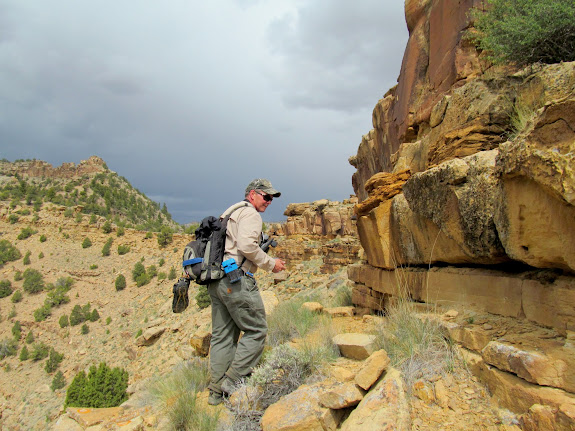 Petroglyph on a slab of rock 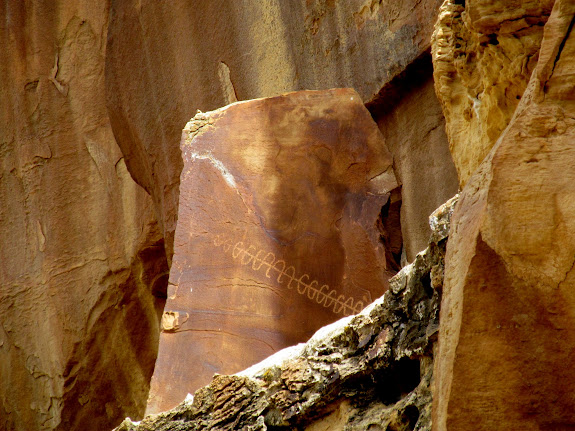 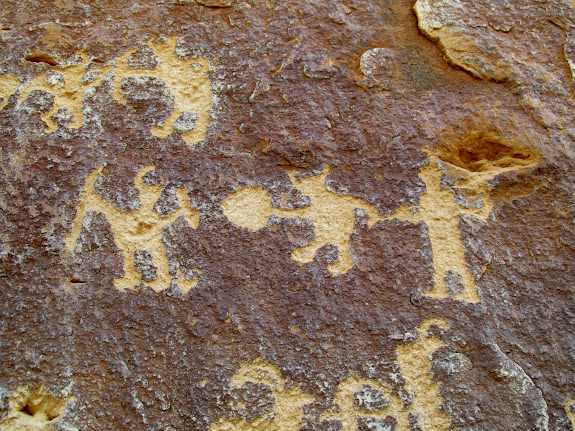 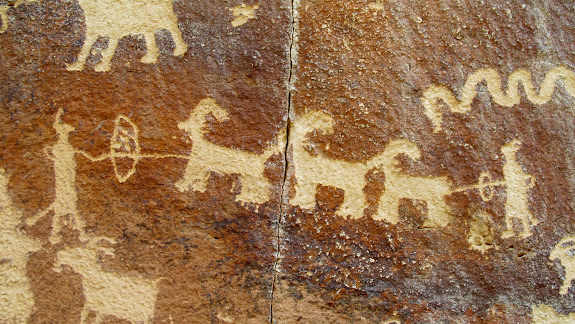 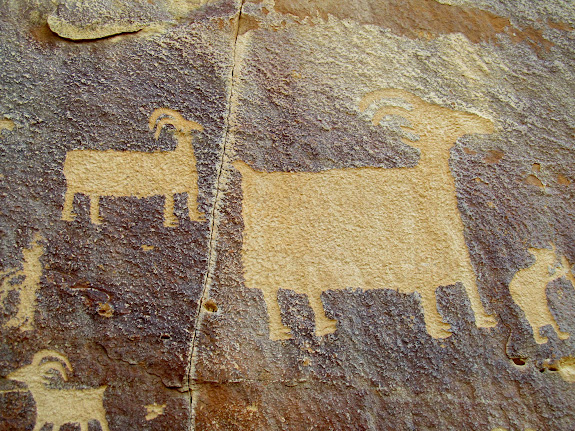 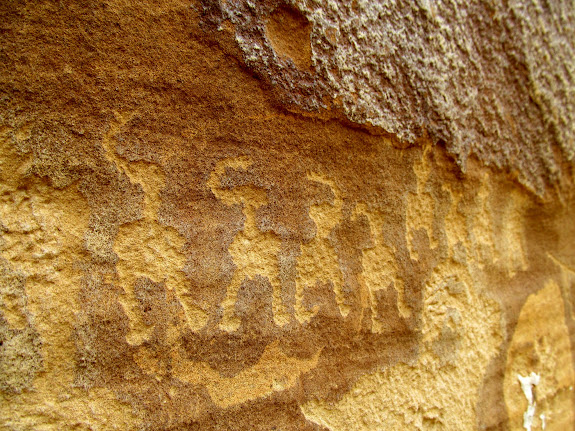 A group from Colorado 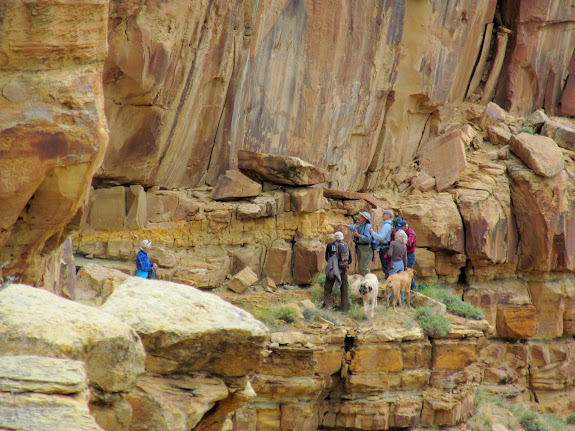 Farther along Warrior Ridge were more variations on the fighting and hunting themes along with a few very remarkable petroglyphs. My favorite was an interesting central figure being attacked on both sides by shield-bearing figures. A couple of large bighorn sheep petroglyphs and a very nice elk rounded out my favorites from the area. 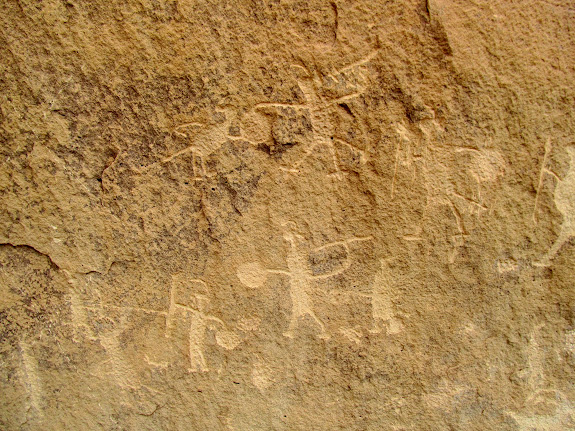 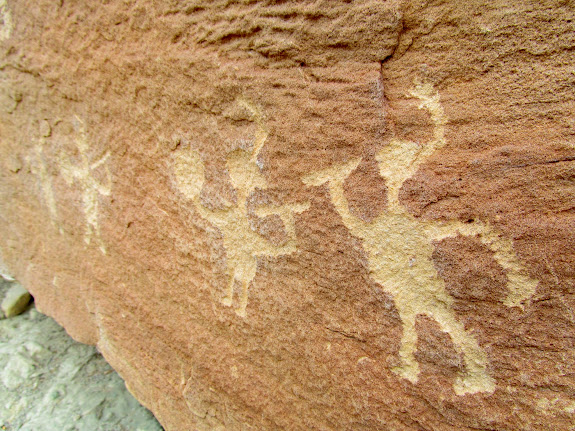 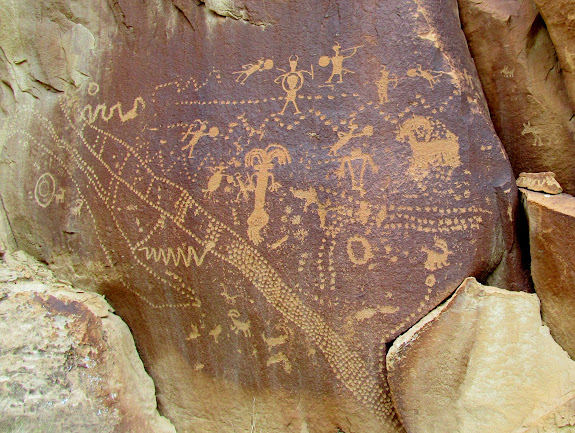 My favorite petroglyphs on Warrior Ridge 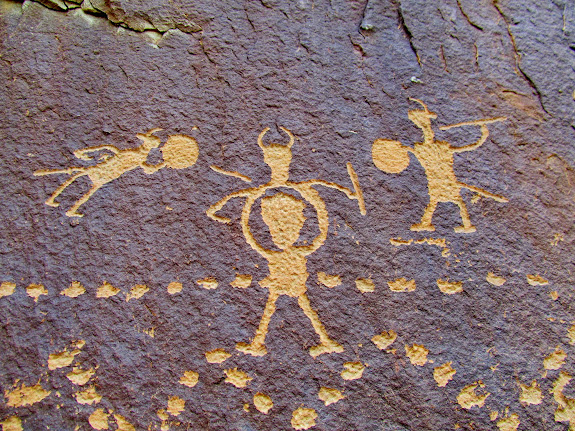 Large sheep, snakes, fox, and others 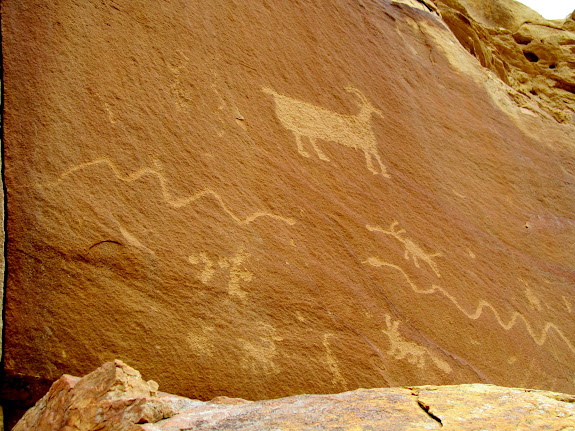 Large sheep among many smaller animals 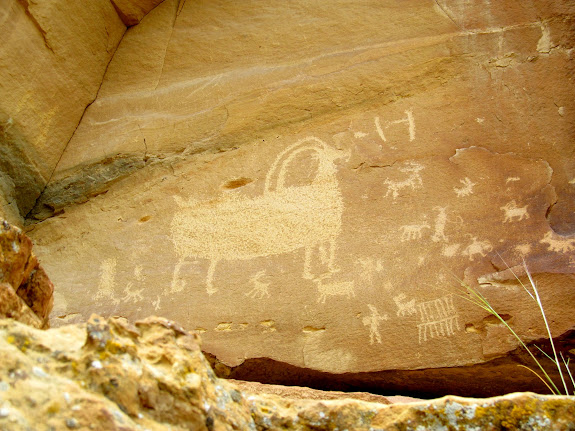 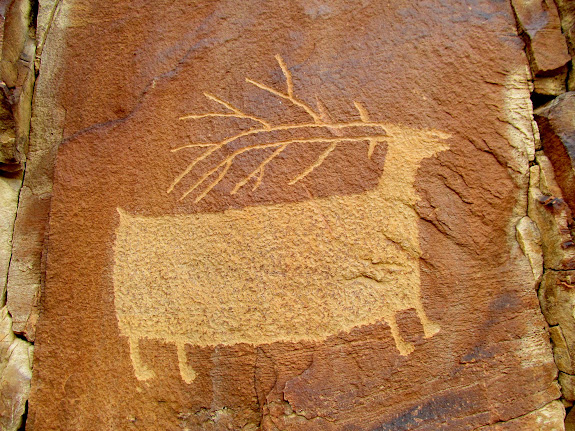 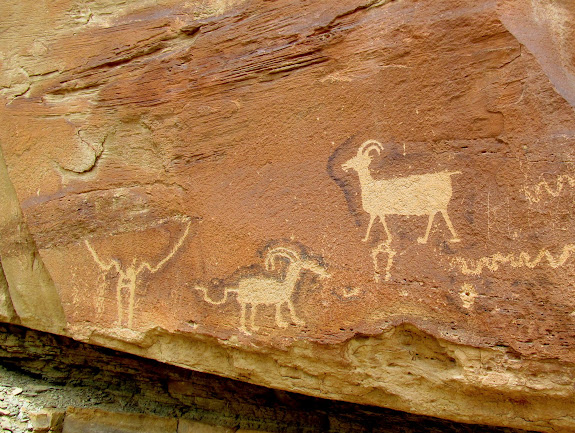 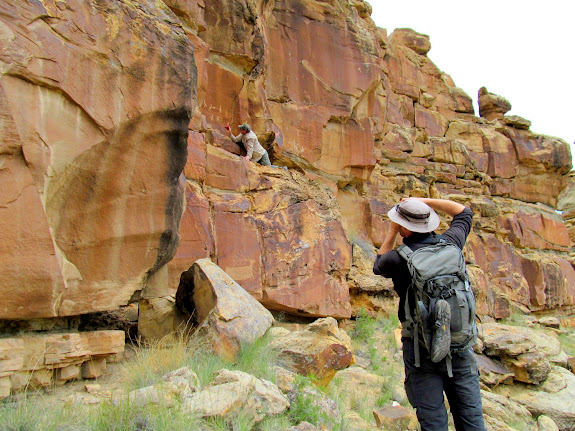 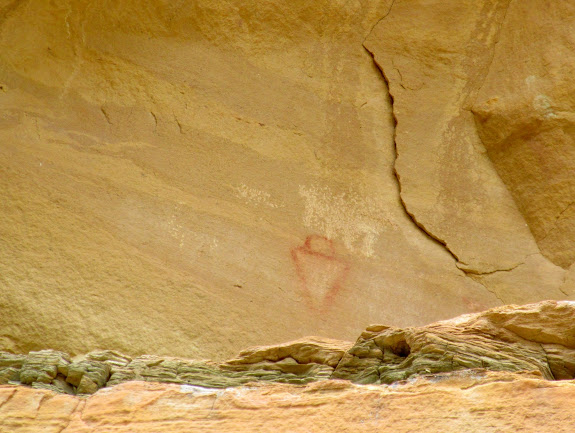 We worked our way up to the highest point of the ridge where we were able to look down the other side toward our vehicles. From there we followed the top of the ridge back down close to where we’d started the climb up. Since we were now above the cliffs containing the rock art there wasn’t much to see while descending, but I did find a pit house that I had made out in Google Earth before the trip. Instead of following our original route back to the vehicles, we followed a cow path that turned out being much easier. The creek crossing was shallower and full of gravel instead of big rocks, which made it much easier on my bare feet. Just after the creek crossing it began to rain heavily. It had been threatening to rain all day and had even sprinkled a couple of times, but now it was a downpour. We all hiked in a straight line toward the paved road and then followed it back to the vehicles. Despite the rain we had to stop a couple of times to look at rock art and inscriptions along the roadside. We said goodbyes after reaching the vehicles, with Randy and Diane heading to SLC, and Alan and I going home. Although it hadn’t felt like a very strenuous hike at the time, when I got home some soreness had set in. It was the good kind of sore that gently reminds one of the good times had. 🙂

Climbing to the top of Warrior Ridge 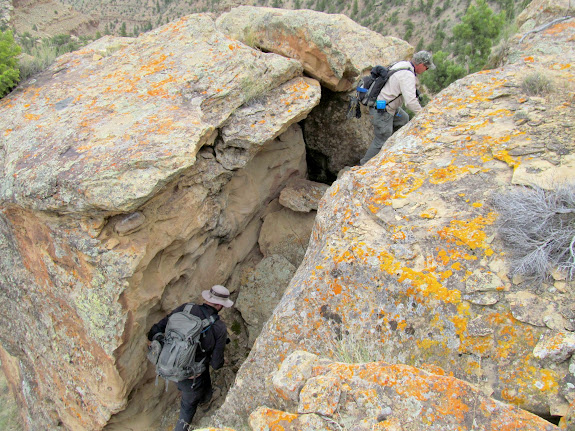 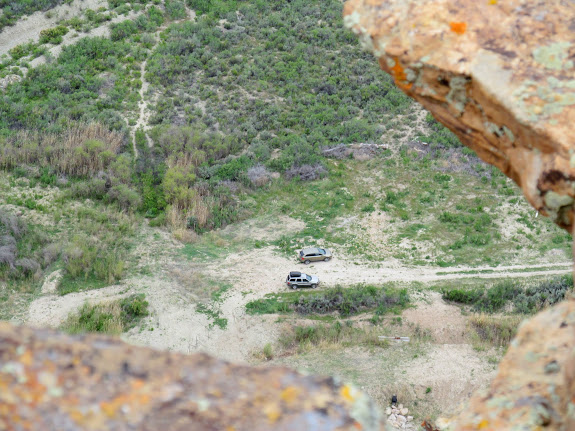 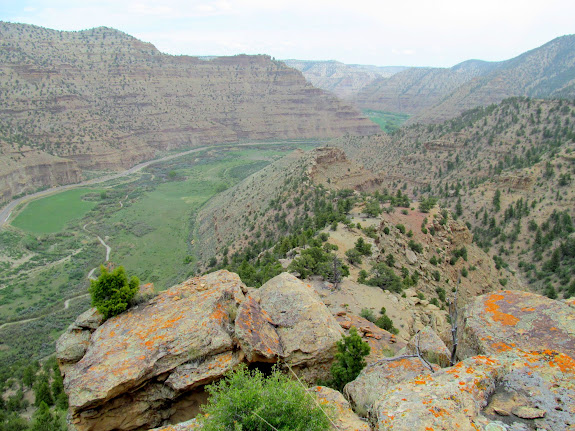 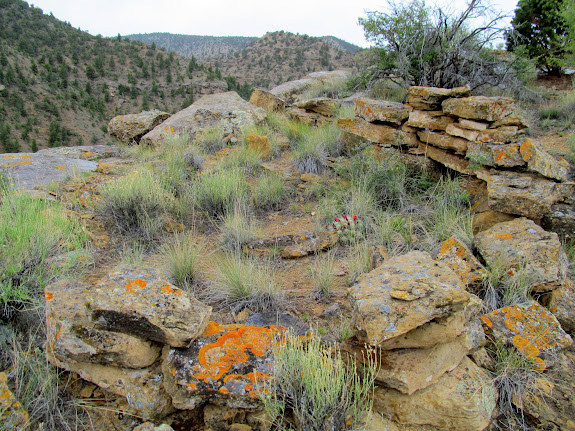 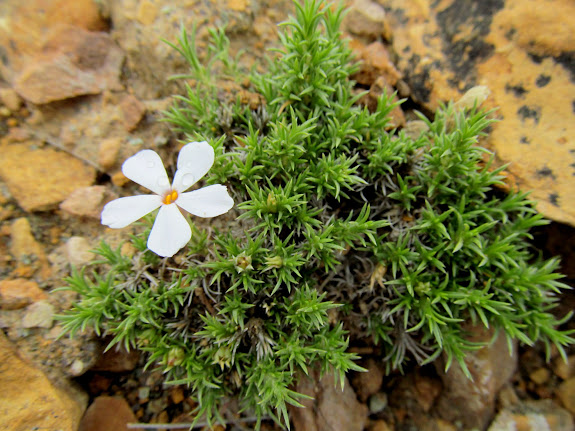 Walk back to our vehicles in the rain 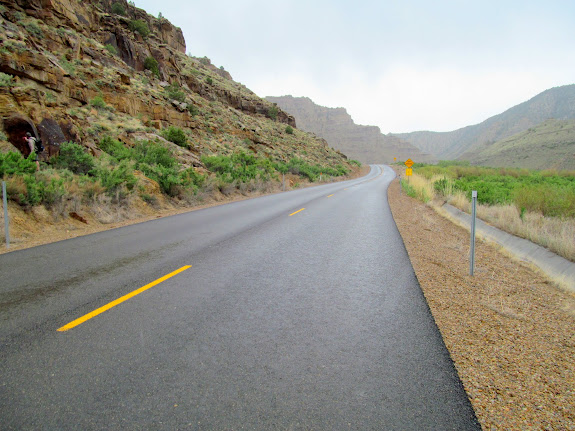