Traci and I celebrated our 18th wedding anniversary this month. Somehow turning 40 later this year doesn’t make me feel so old, but having been married this long does! We’d originally planned dinner and a movie and maybe some shopping in the Provo/Orem/SLC areas, but the growing apprehension of dealing with traffic and people caused us to do a 180° turn. We went south instead of north and spent the day in Green River, Utah. Usually Green River is just a stopping point for fuel or food on my way to/from another destination. This time it was our destination and we managed to find enough to keep us busy and entertained for the entire day. First we stopped at Monument Hill to check out a couple of strange art installations, titled “Ratio” and “Elements.” I quite enjoyed several huge clusters of prickly pear cactus blooming on the hill near the art. For lunch we ate at Chow Hound, were we both enjoyed fish and fries and shared a large milkshake. 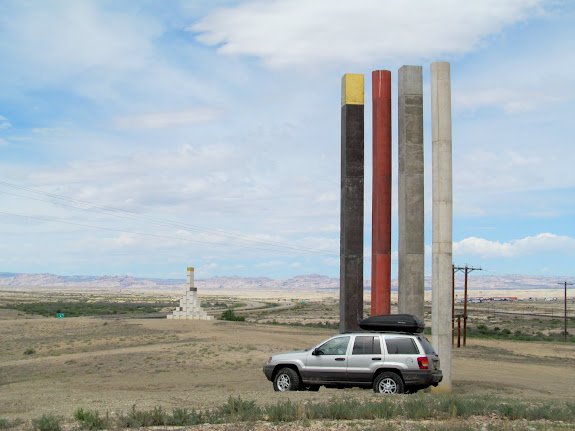 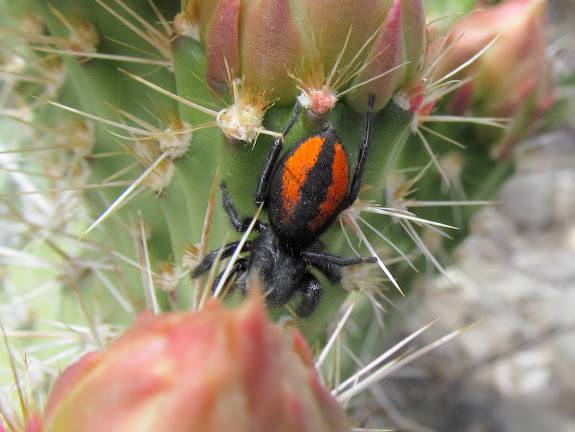 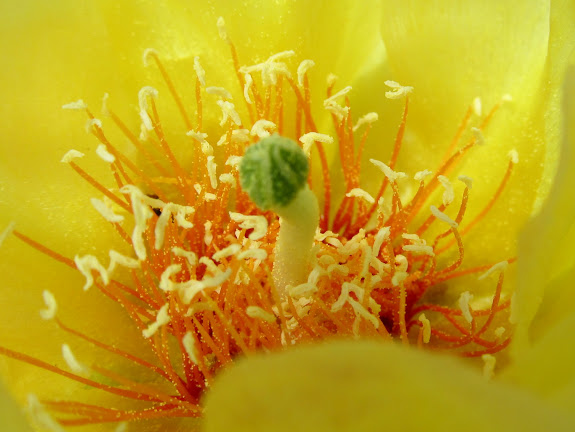 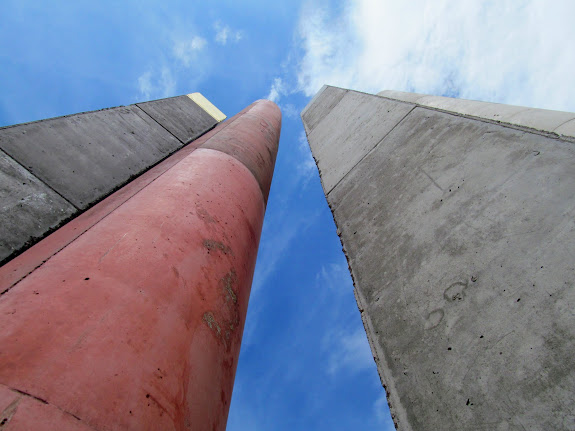 Traci on the Ratio 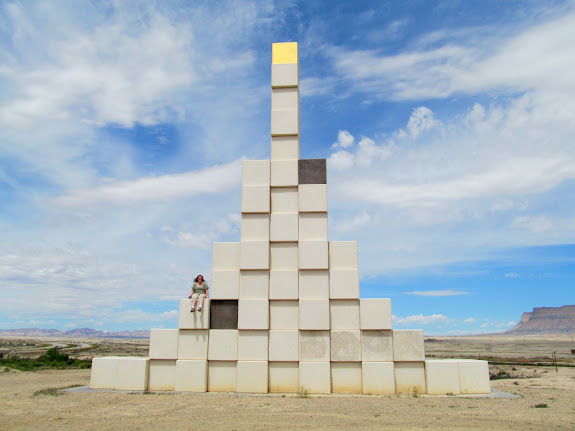 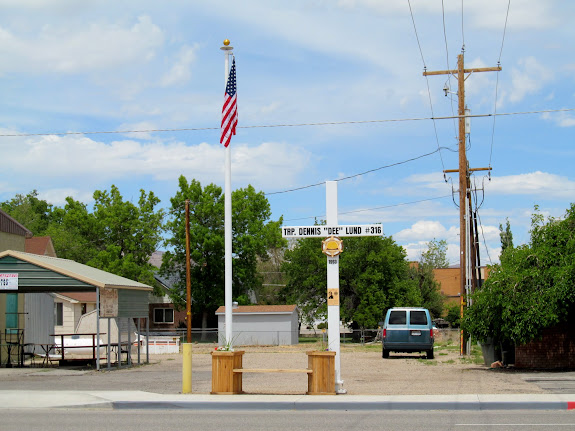 After lunch we spent a few hours at the John Wesley Powell River History Museum. It was my first time visiting the museum and it far exceeded my expectations. The exhibits were wonderfully crafted and covered a huge swath of history of the Green and Colorado rivers. I didn’t bring my camera inside but I did manage to snap a photo with my phone of the regional map that includes one of my photos.

My photo on a map exhibit at JWP Museum 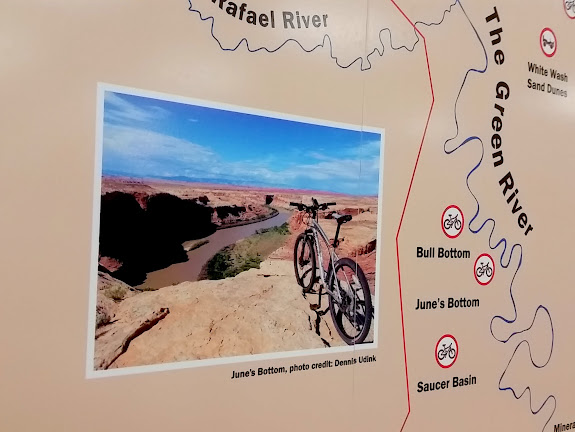 With a little time to kill before dinner time, we drove to Salt Wash to try visiting a few wells with flowing mineral water, similar to Crystal Geyser or Chaffin Ranch Geyser. I’d spotted three of them ([1] [2] [3]) in Google Earth and didn’t know whether they actually erupt into the air like geysers, but it was clear that they sometimes flow judging from the orange mineral deposits visible in the satellite imagery. On the way there I spotted a rock outcropping that looked like a good candidate for rock art and/or inscriptions, so we parked and walked over to check it out. There were a lot of lithic flakes on the ground, but the only writing I found was a single inscription from 1957. It was interesting, however, that it was on a boulder that had fallen from the cliffs above so that the inscription was now sideways. We were able to drive to the first well but it wasn’t terribly interesting. Water was bubbling in a pipe but wasn’t flowing out at the time, though clearly it does occasionally flow. I wasn’t able to drive to the other two wells because the “road” was motorcycle-only, even though it was easily wide enough for a full-sized vehicle. 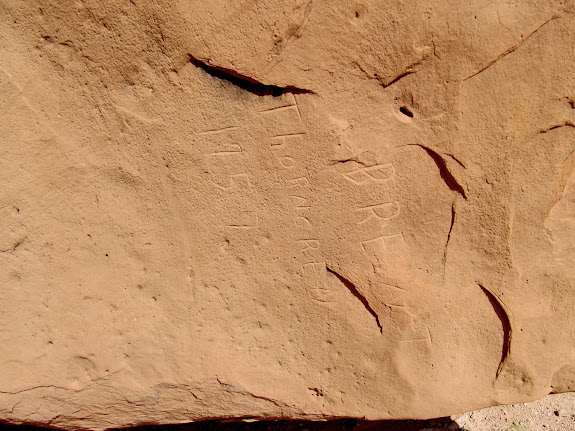 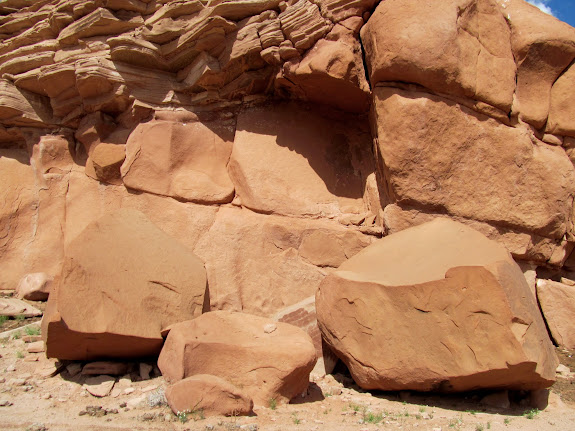 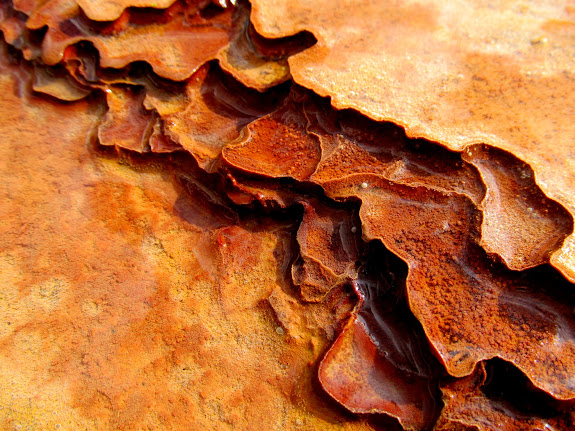 Jeep parked at the well 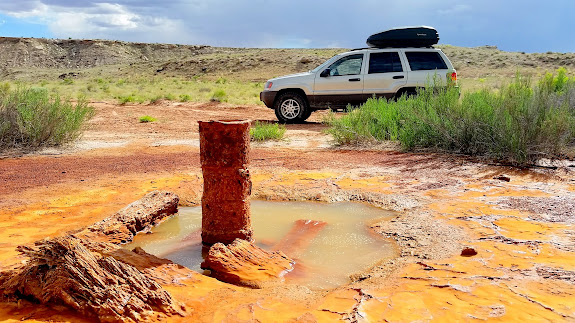 Returning to Green River, we stopped at Ray’s Tavern for dinner. I expected it to be crowded at 6PM on a Saturday, but it wasn’t and we were able to grab a booth. I enjoyed a burger and fries with a Uinta Cutthroat Pale Ale, while Traci went all-out with a bacon cheeseburger. 😀 The atmosphere certainly beat any crowded restaurant in northern Utah. 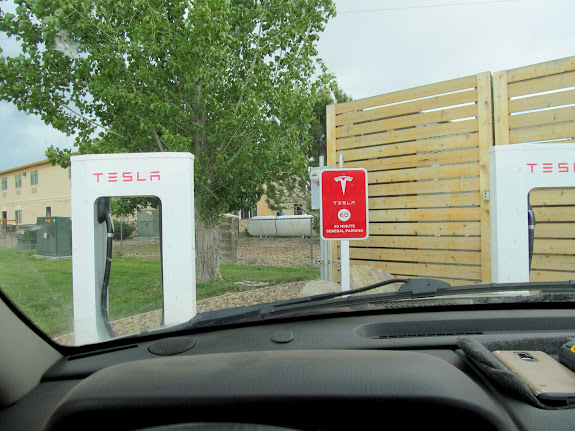