Alan and I originally had plans to ride motorcycles into Little Park to search for a petroglyph panel that I’d read about in a cultural resource inventory for a nearby coal mine, but with a 40% chance of rain on Saturday I chickened out on the motorcycle part. Instead we ended up driving, and before reaching our intended parking spot and beginning the hike it rained briefly. However, within minutes of starting our hike the clouds cleared, the sun came out, and we had to shed our rain jackets. The sun stayed out the rest of the day–it would have been perfect for a ride. 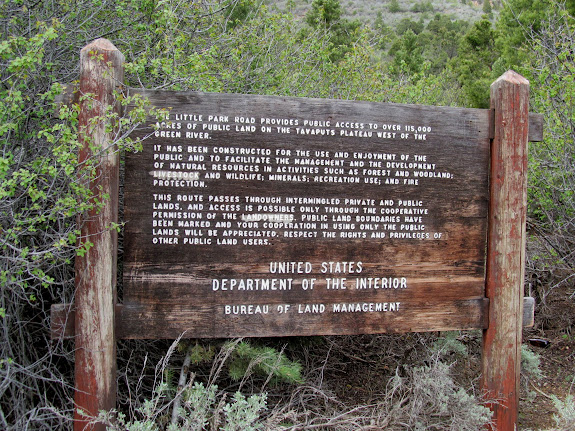 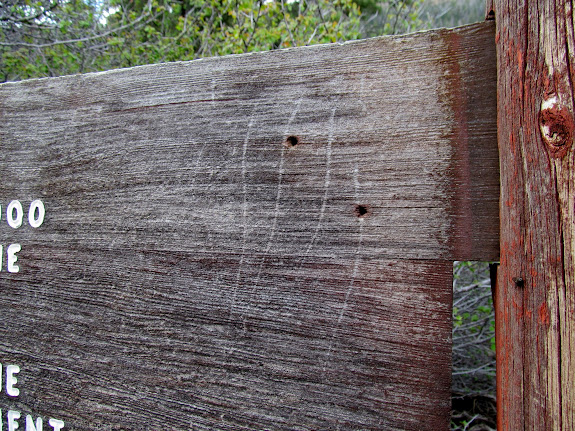 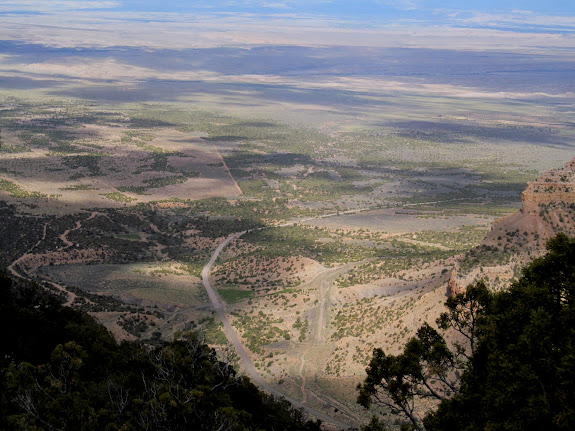 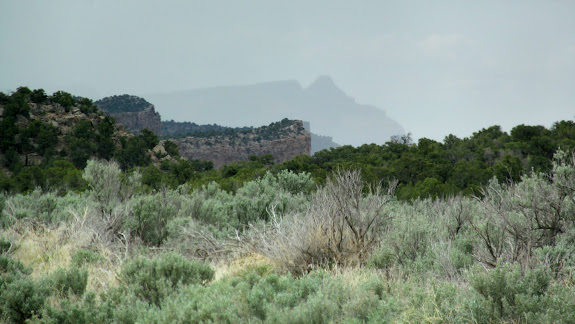 Sunny conditions for the hike into Little Park Wash 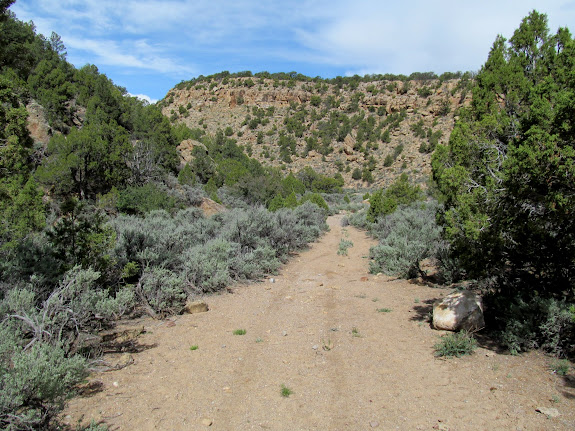 It was an easy walk into Little Park Wash. I was expecting a two-mile round-trip hike to the petroglyph panel and back, but we didn’t find it where I was expecting it to be. Alan and I hiked upstream and downstream in Little Park Wash and never did locate it, but we did find one faint zig-zag pictograph and a snake pictograph with some dotted lines below it. We’d hiked 7.3 miles total by the time we returned to the Jeep. 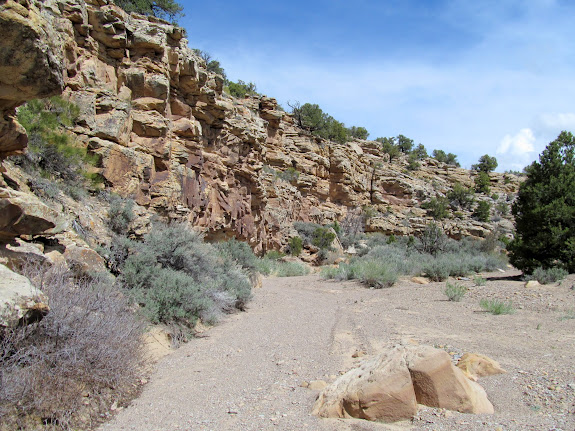 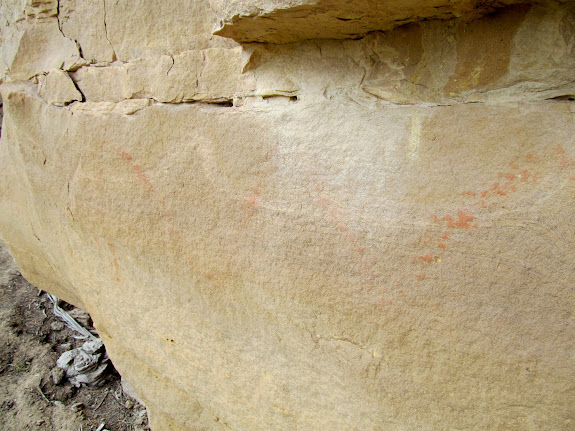 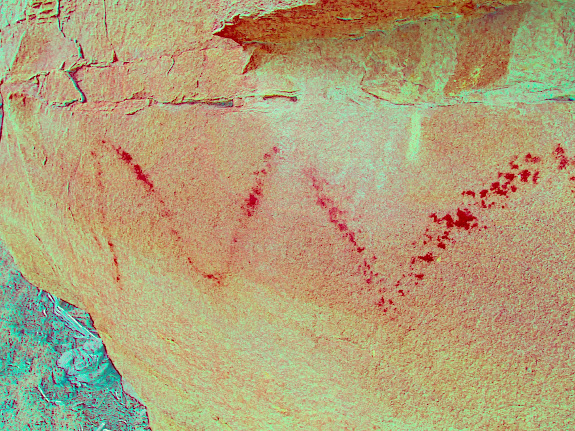 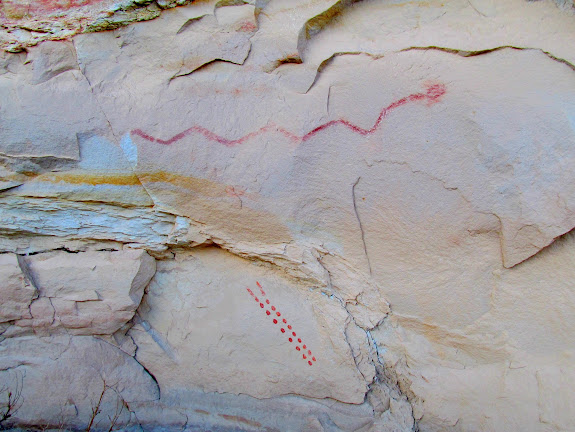 Cap on a drill hole 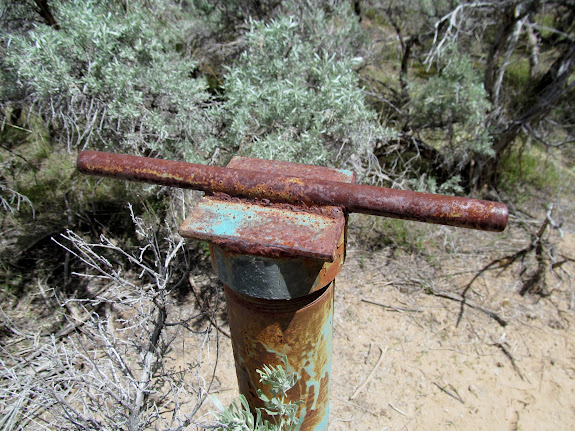 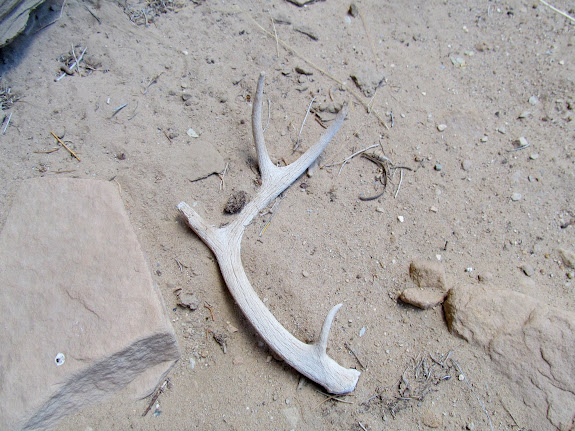 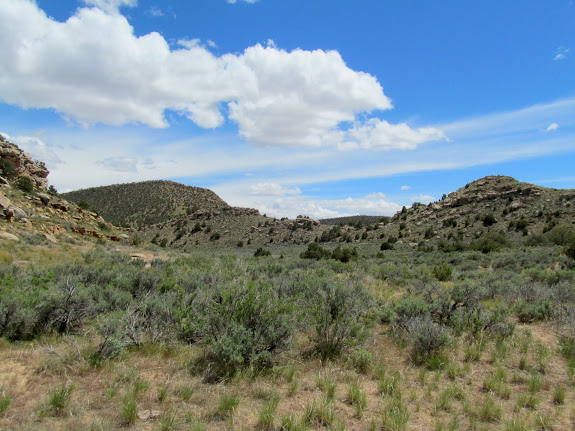 It was late enough that we could have called it a day, but Turtle Canyon was calling. Alan had heard that the road through the canyon was badly washed out and impassable. We decided to see if that was true. Little Park Road descends into Turtle Canyon and connects with Range Creek, and losing access to that area would be a bad deal. While descending toward Turtle Canyon there were a few washed out road sections that were easy enough to pass over. Once the road connected with Turtle Canyon, however, it became fairly difficult. Judging from the tracks in the wash some ATVs and UTVs had passed through, but it didn’t appear that any full-sized vehicles had done so. It was slow-going but we managed to get almost all the way to Range Creek. The Jeep got stuck a few times and even high-centered pretty badly once, but with some digging, rock-stacking, and other road work, we pressed on. It was clear that even ATVs had scraped and high-centered in some of the places we had trouble. Alan was out of the vehicle a lot acting as a spotter and road builder, so while I was driving he was able to take many of the following photos which he allowed me to use (thanks, Alan!). 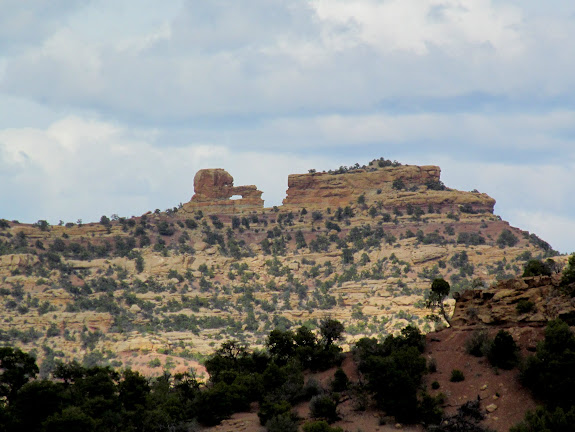 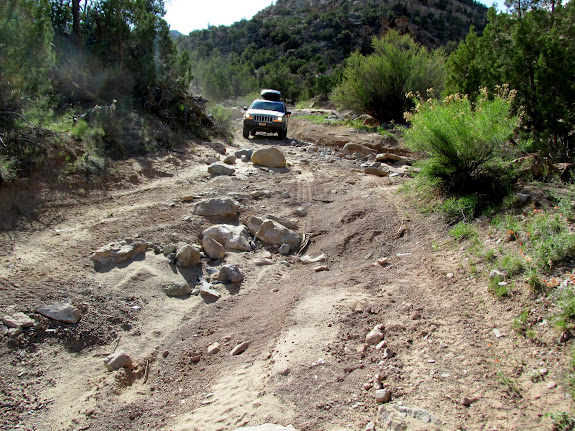 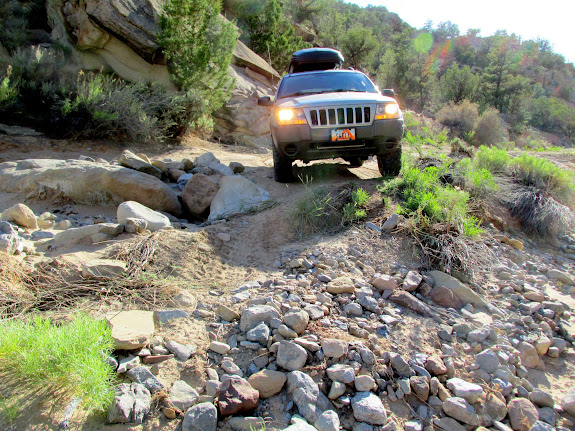 Scouting the route ahead (photo by Alan Peterson) 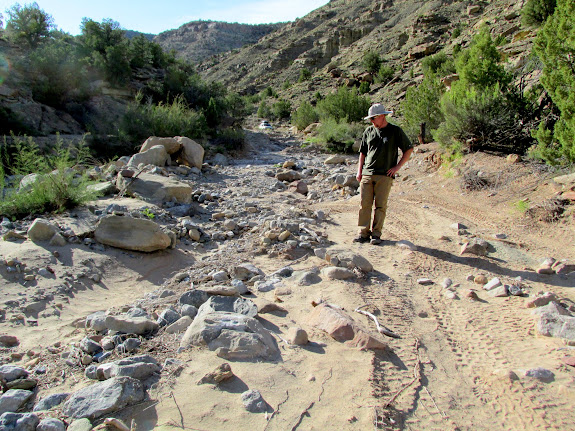 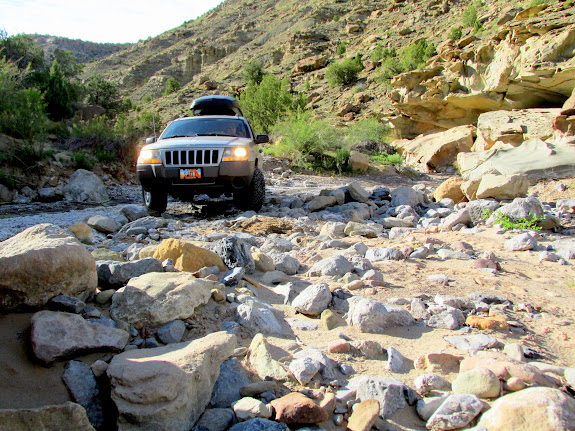 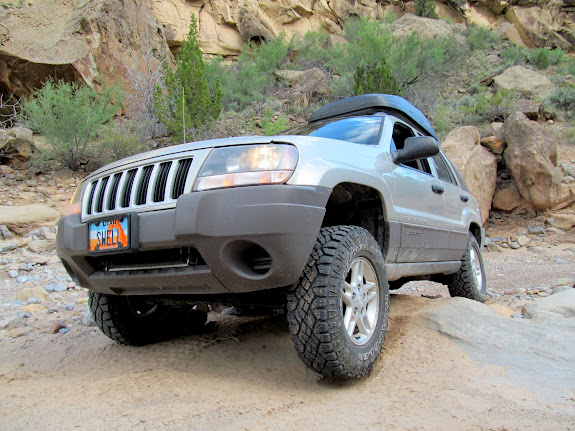 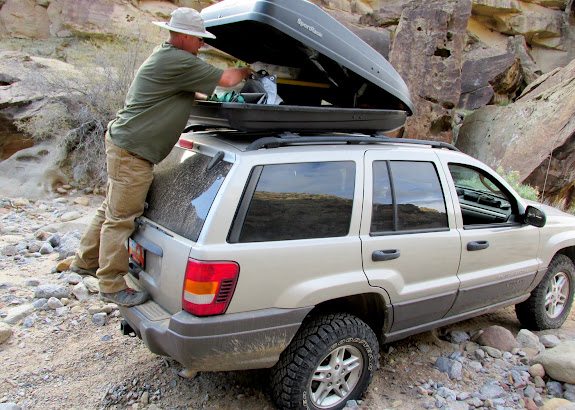 Scrape marks from being high-centered 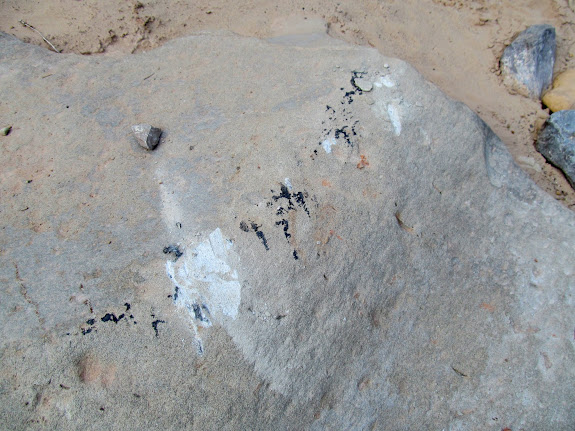 We had 0.2 miles left to go before reaching the road junction with Range Creek when the Jeep got hung up once again. I was certain we could make it the rest of the way with a little more work, but it was getting late and my worry was that Traci would be itching to call search and rescue if I didn’t get back into cell service soon and let her know that things were okay. Instead of digging and stacking rocks to make it the remainder of the way to Range Creek, we backed up and found a spot to turn around, then reversed course over all the obstacles we’d descended. It still took some work to get back out. I needed to get a run at some of the embankments out of the watercourse so we cleared rocks from the path to get a smoother run. Once I regained cell service, we’d covered a total of 25 miles of road in 4.5 hours since the end of the hike. The remaining two hours of driving home was done in the dark. I was glad to have made it out, but still wishing we’d made that last 0.2 miles. 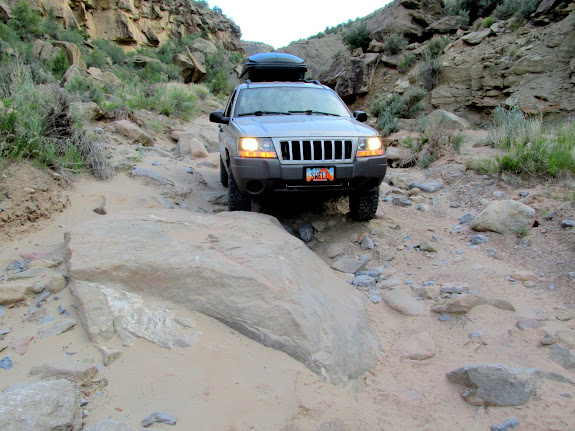 View down Turtle Canyon at dusk 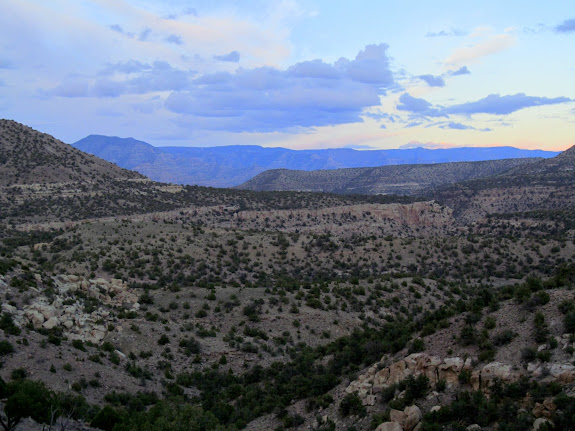