I spent last weekend wandering around close to home and visiting some rock art sites. Friday evening I rode my motorcycle about 40 miles round-trip to see some pictographs near Gordon Creek that Alan had just barely told me about. I explored a little around the rock art, then rode to Consumers Road and took it west part of the way up onto the Wasatch Plateau. 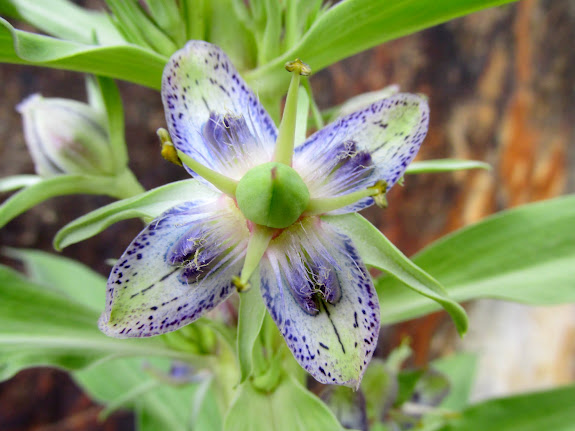 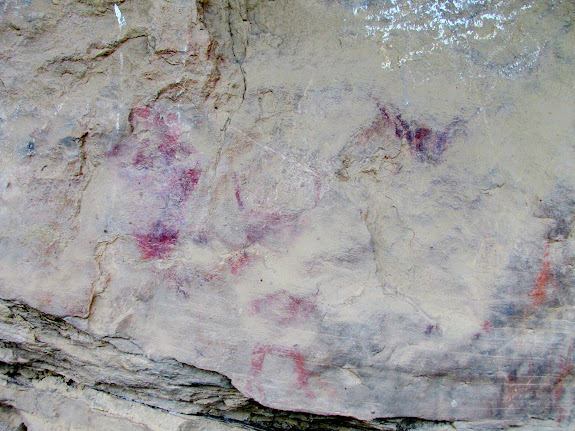 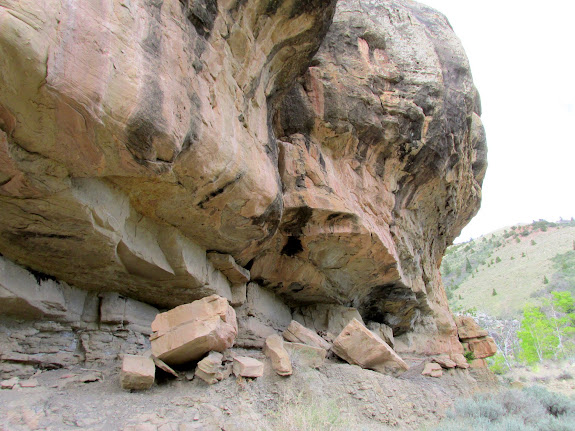 Motorcycle above a reclaimed mining area 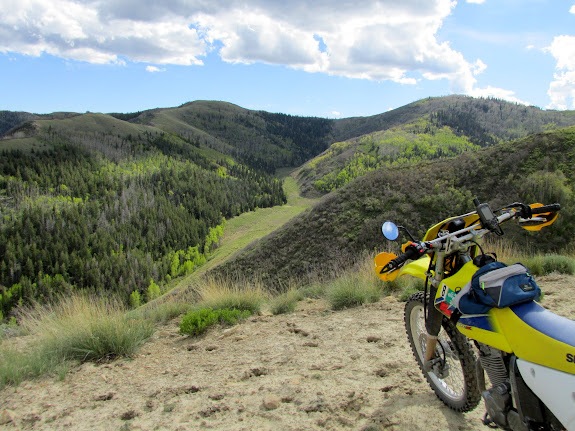 Saturday’s plan was to drive the Jeep north on US-6 and US-191 to see some rock art along the Price River and Willow Creek. I thought I knew where the Price River rock art was so I didn’t bother consulting the notes I’d written up on them a few years ago. I ended up spending several hours wandering around some hills above the river and never did find the pictographs I was after, but I did find some potsherds and potential pit houses. It was a big surprise to find that stuff because it was within the Helper city limits. I spent so much time there that I didn’t make it to Willow Creek, but after returning home I realized where I should have been to find the pictographs. 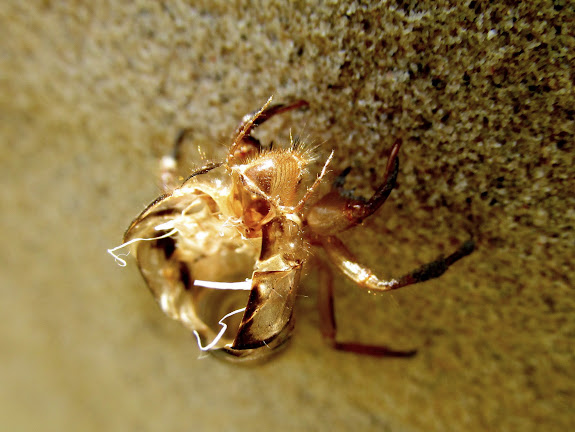 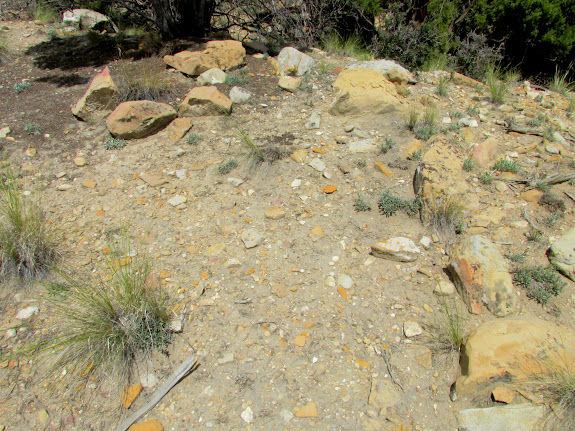 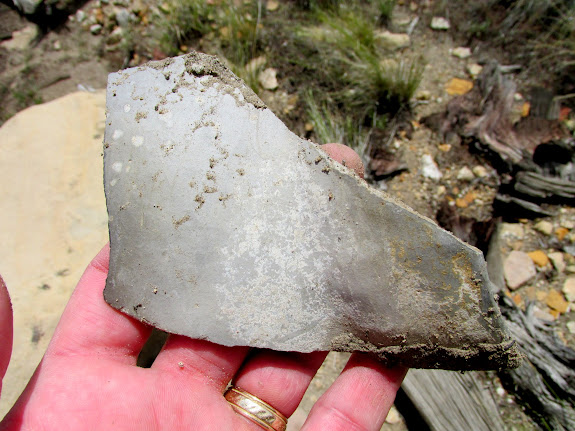 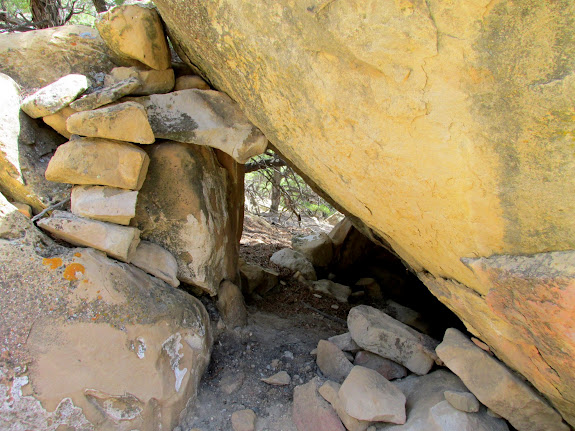 Sunday was a long but fun day. Well, I spent the morning at home getting the evaporative cooler de-winterized since the weather is finally warming up–that part wasn’t fun. However, as soon as I finished that I hit the road on the motorcycle. I rode a pretty even mix of pavement, gravel, and dirt throughout the day, covering about 75 miles. I took the #0 trail out of Price heading east, then rode the pavement north following Soldier Creek. Along Soldier Creek I hiked to some pictographs and found what was probably a habitation site below the cliffs holding the rock art. I also saw some initials in axle grease that matched an inscription farther upstream that I’d seen a couple of years earlier.

Coal Creek on the #0 trail 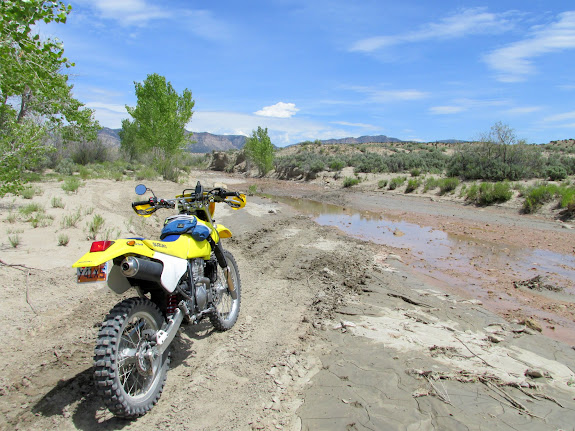 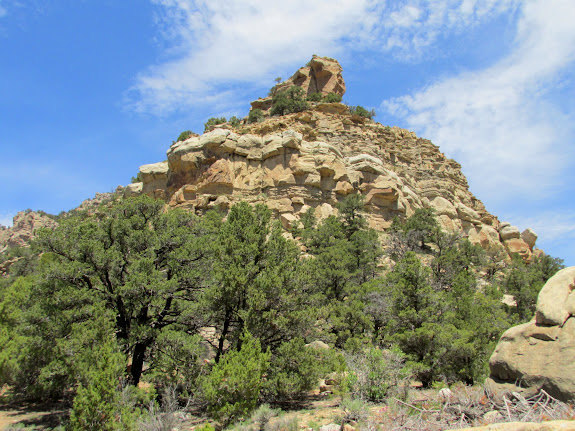 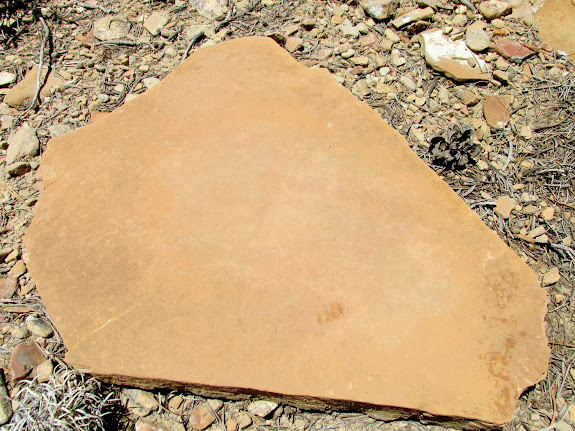 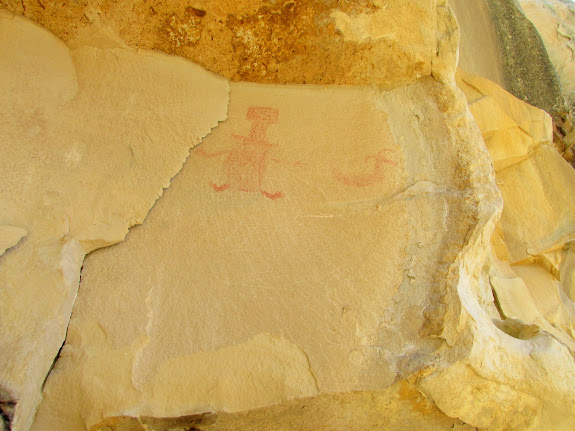 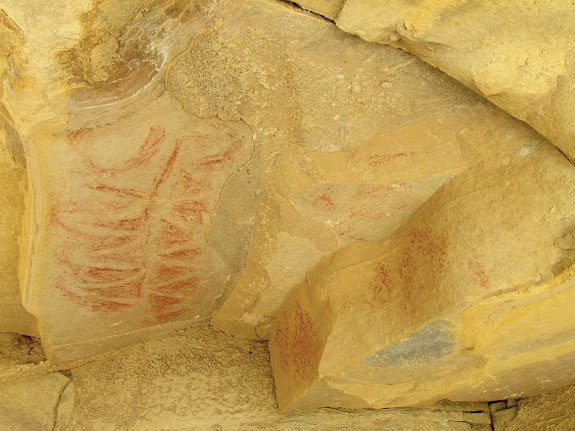 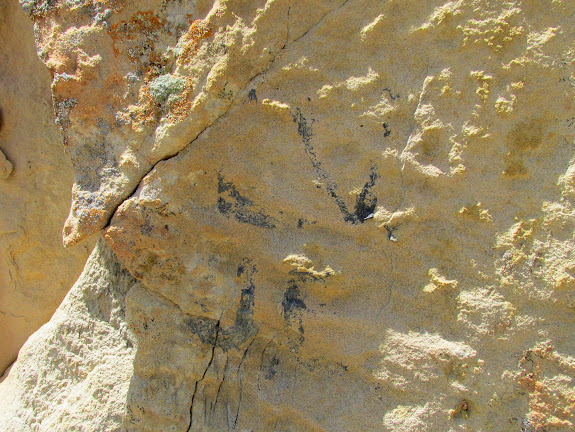 I cruised over to Dugout Creek and visited some pit houses and pictographs at two different sites. The pit houses were relatively intact compared to many that I’ve seen. There was one pile of rocks that looked suspiciously like a grave, complete with a small boulder for a headstone. The pictograph site had more rock art than I was expecting to see but much of it was just red blobs and spatters of pigment. Some of the art was pretty interesting, though. 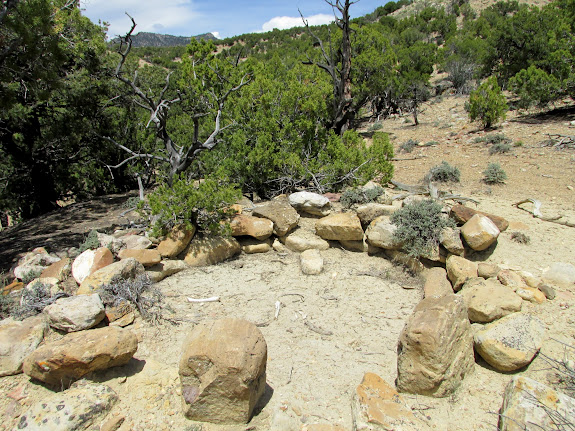 This looks suspiciously like a grave, near the Dugout Creek pit houses 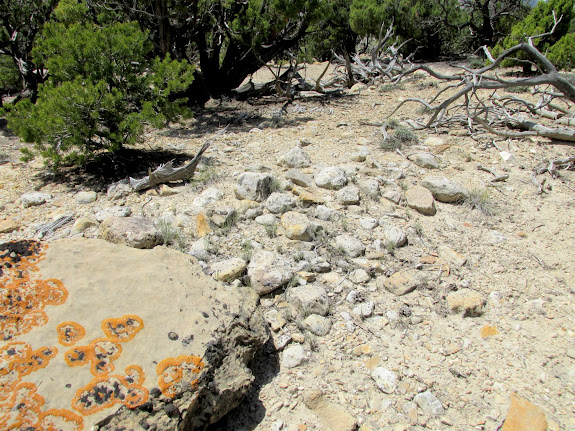 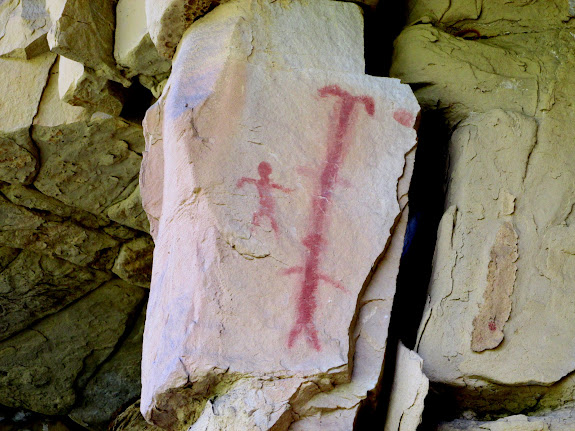 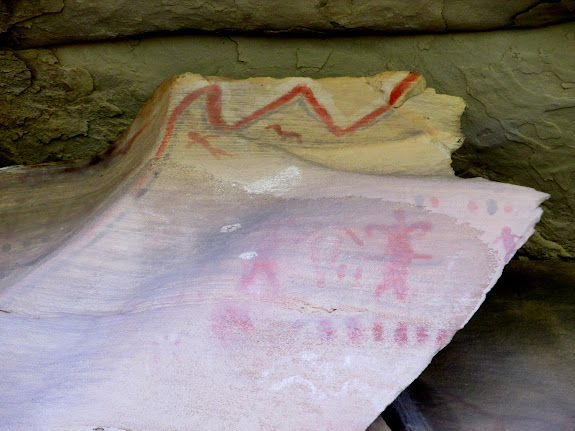 I rejoined the #0 trail and followed it farther east into Clark Valley, stopping at a few historic sites. I’d hoped to continue all the way to East Carbon/Sunnyside but a thunderstorm that wasn’t in the forecast started moving in from the south and scared me away. I rode fast trying to beat the storm home and still got rained on a bit. This was the longest ride I’ve done so far on my dirt bike. It got 57.7 MPG on this trip which, in similar conditions, would give me a range of about 160 miles per tank–probably enough to ride from Price to Moab. 😉 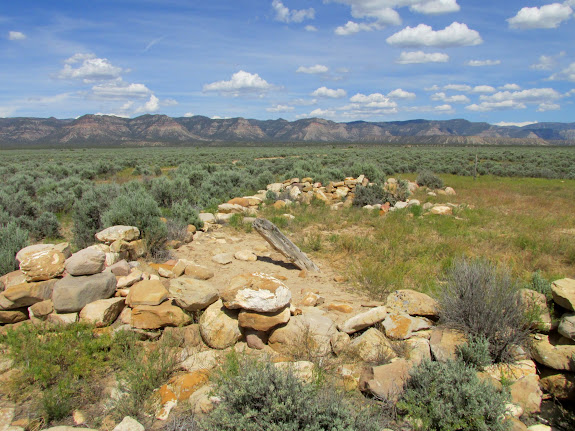 Possibly the remains of a cabin in Clark Valley 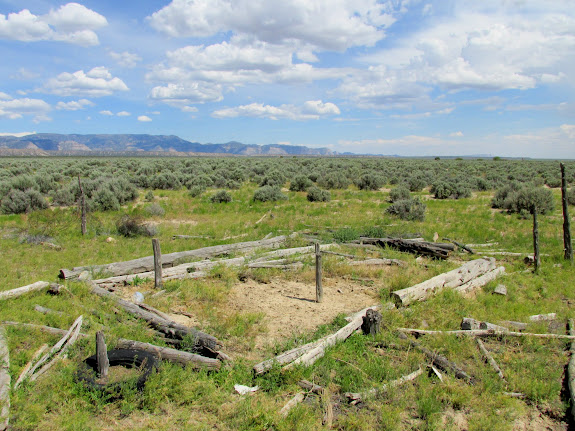 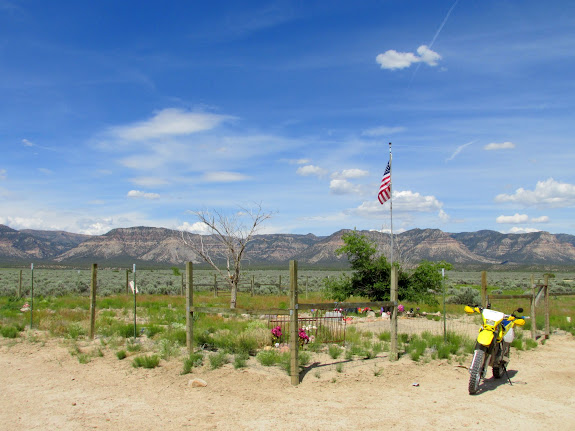 My turnaround spot near Bear Creek 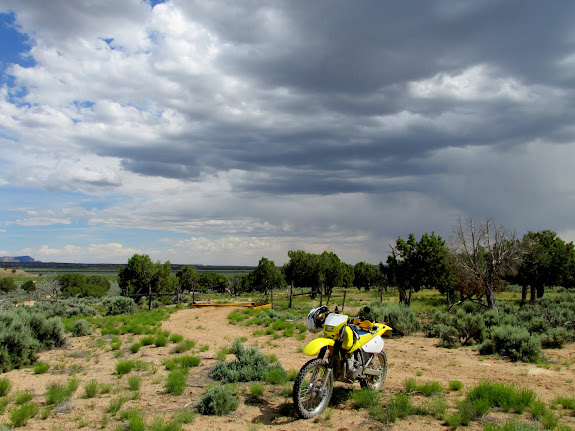 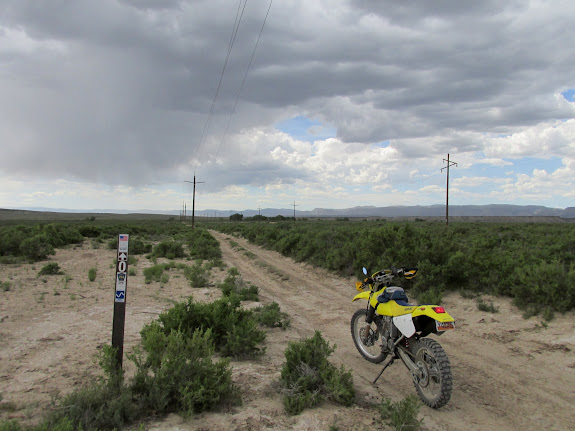 Crossing of Pace Creek that sketched me out 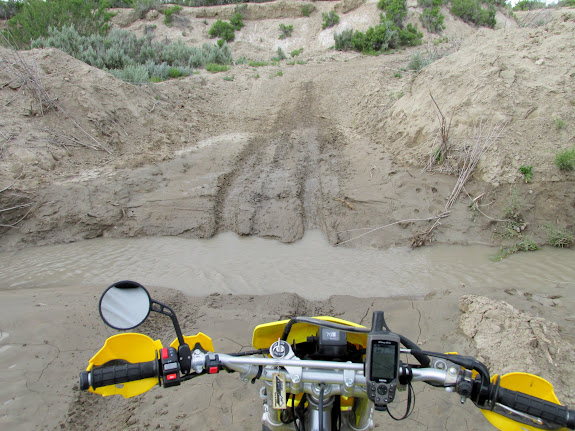 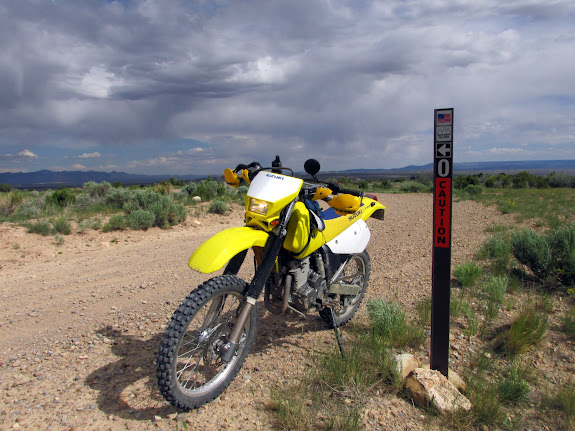