Traci and I made this year’s annual trek to southern Utah alone, leaving the kids with her parents and the dogs with my mom. We arrived in Hurricane late Thursday afternoon and spent the evening with Eric and Sherie at their place and went out for a late dinner. Friday was our first full day in the area and we were hoping to squeeze in a short hike before the forecast rain hit. Eric had to work so Traci, Sherie (and their dog, Bosley), and I drove to the Red Cliffs area to hike to an alcove in Red Reef that I’d seen during the drive along I-15 the previous day. We started out on the Prospector Trail across Harrisburg Flat and then headed up a wash toward the alcove. I was hoping to find something interesting in the alcove. It ought to have attracted historic or prehistoric travelers, but I didn’t see any carvings in the sandstone nor any lithics on the ground. We looped back to the Jeep after having hiked just over two miles and met Chris there. He’d just driven down from the Salt Lake Valley and the rain apparently followed him. 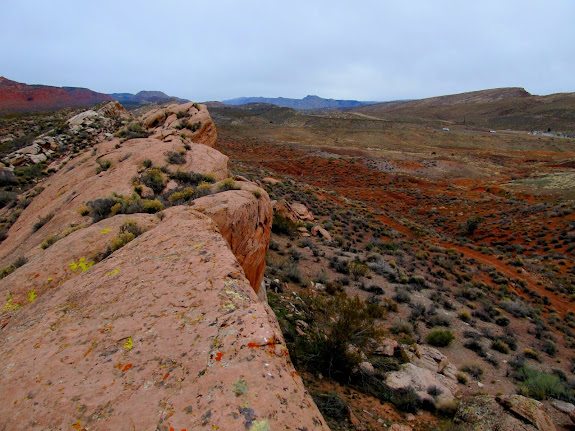 Following a wash to an alcove in Red Reef 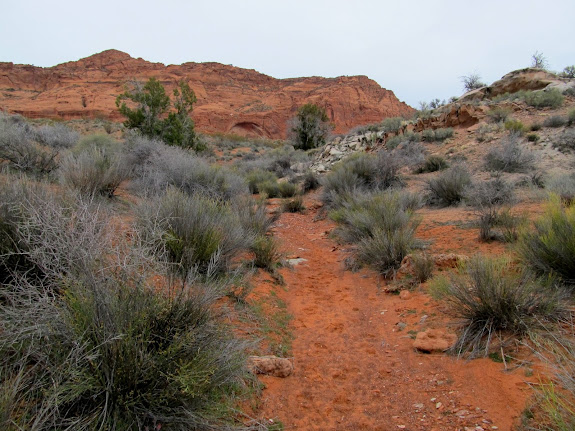 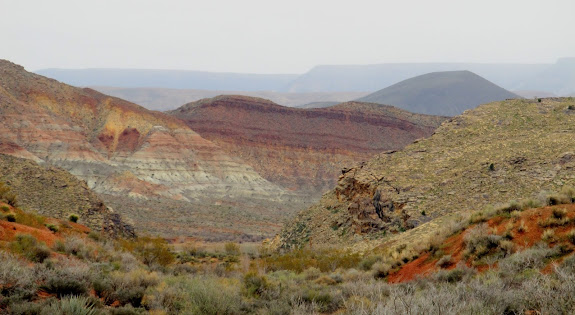 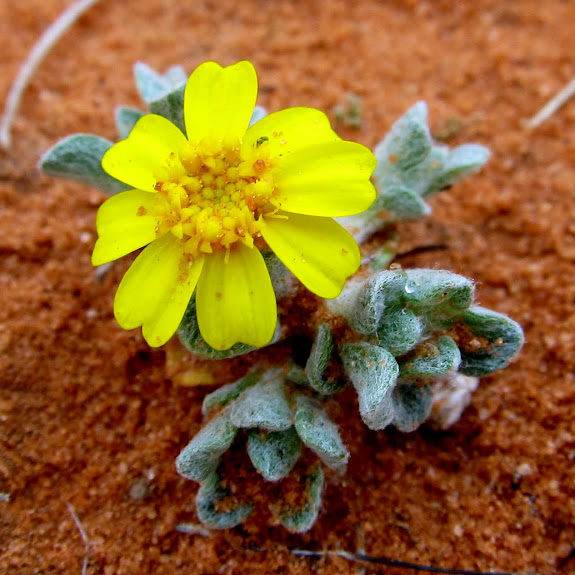 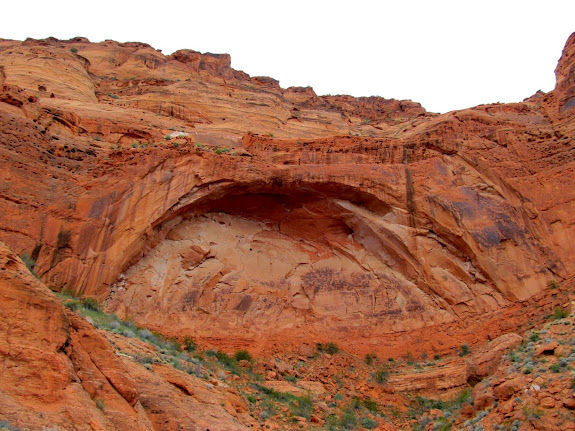 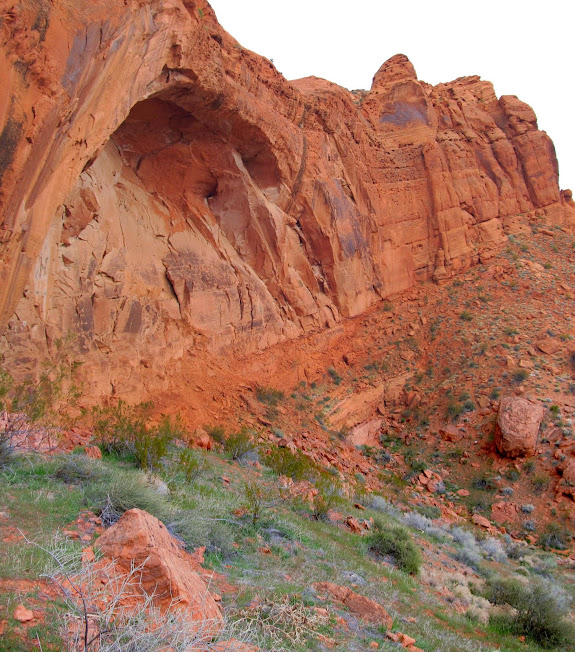 Sherie and Traci waiting below 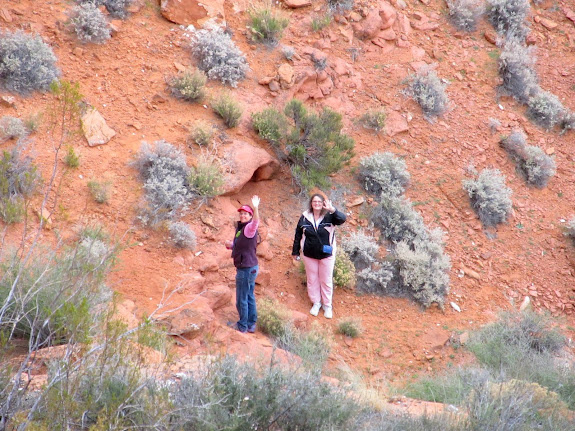 Walking back to the Jeep 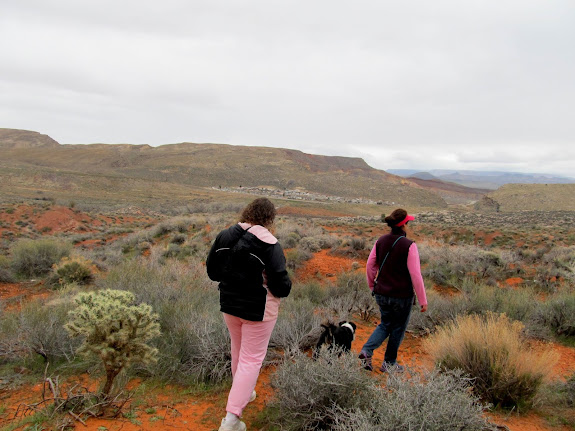 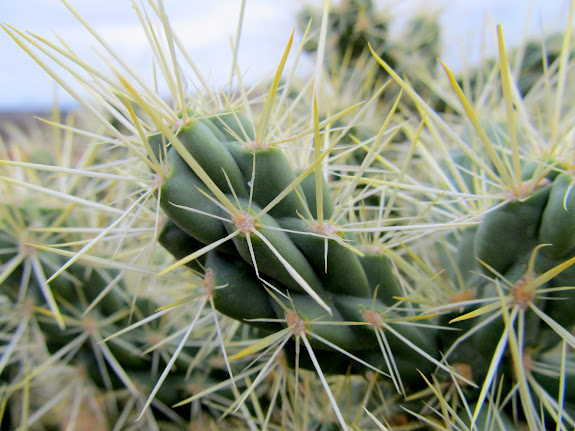 Traci and Sherie took our Jeep back to Hurricane while I hopped in Chris’ Ridgeline. We tried driving to the Cottonwood trailhead but got stopped by tumbleweeds drifted up in the tunnels going under I-15 (though after looking at my GPS track I now realize we were only 1/4-mile from the TH!). We decided to work our way back to Hurricane while finding geocaches along the way. One particularly fun geocache was placed between the lanes of I-15 near Cottonwood Creek. The creek is normally dry but it was just starting to trickle from the rain runoff. We hiked up the creek and then climbed out and over a fence to a knoll where the cache lies.

Tumbleweeds that thwarted mine and Chris’ attempt at hiking Cottonwood Canyon 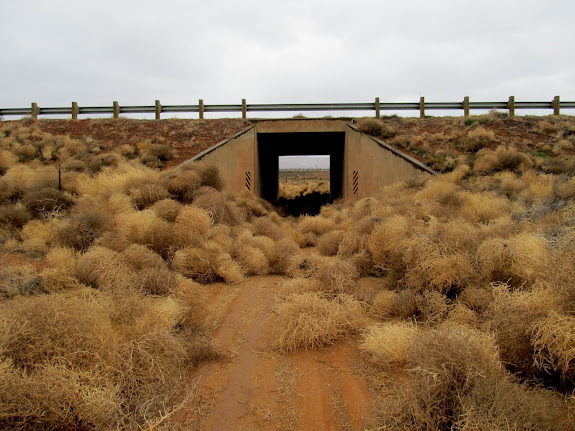 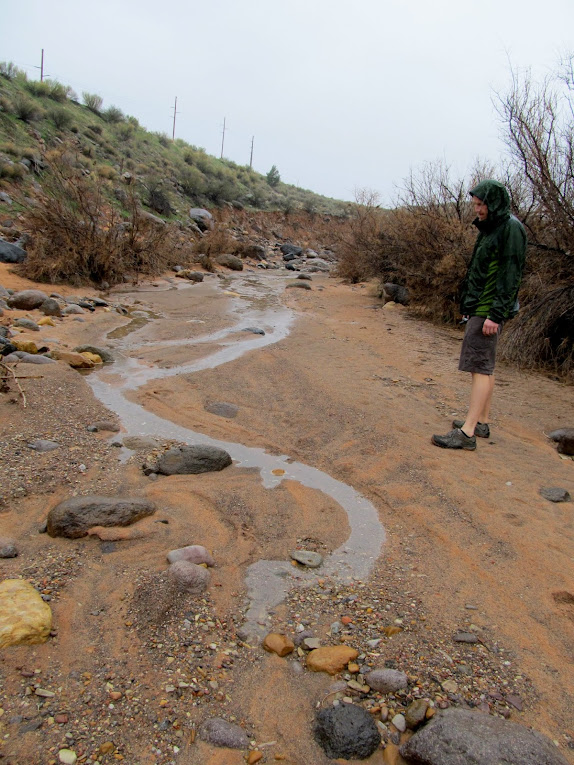 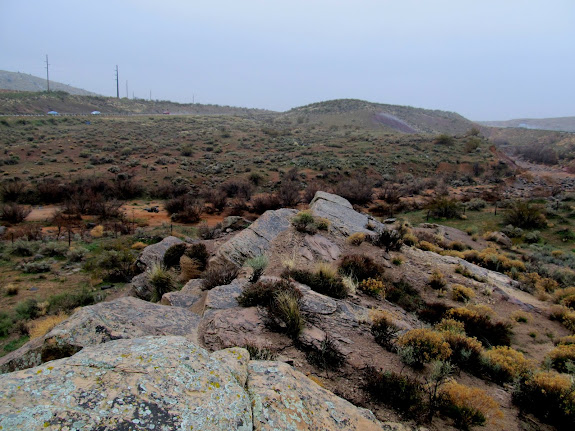 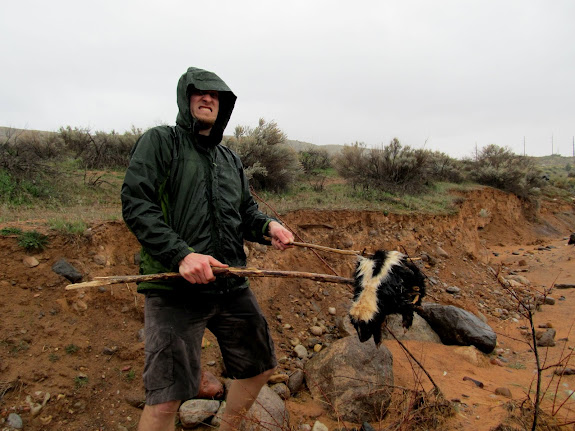 It rained for much of the afternoon and we returned to Hurricane for lunch. By late afternoon Karin had arrived from Price and we were joined by Paul and Pam for a drive. The plan was to take the two Grand Cherokees on the new Southern Parkway road across Sand Mountain, but as I followed Paul we ended up heading from there into Arizona, past Little Black Mountain and into Dutchman Draw. We drove into the canyon until it got too rough for the vehicles and then started hiking. It was a really, really nice surprise to end up in Dutchman Draw. We went suddenly from flat desert into a canyon with deep, rugged walls. We hiked through the canyon until the walls became shallow again, doing a lot of scrambling up boulders and dryfalls and covering 1.5 miles round-trip. As we got back to the Jeeps it began raining as night fell. For a change of scenery we followed a powerline road over to the Mt. Trumbull Road and then headed north back into Utah. We grabbed some pizzas on the way back to Hurricane and retired to Eric and Sherie’s house for drinks and games late into the night. 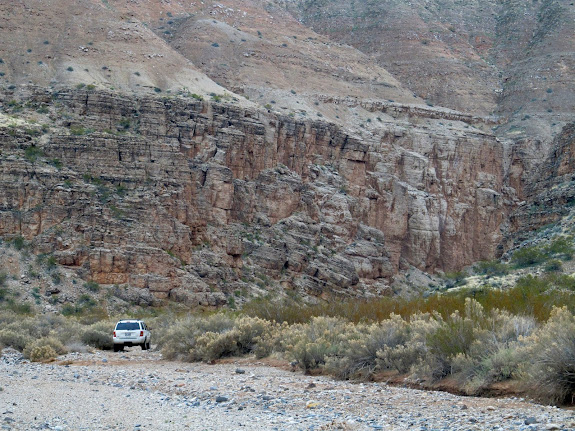 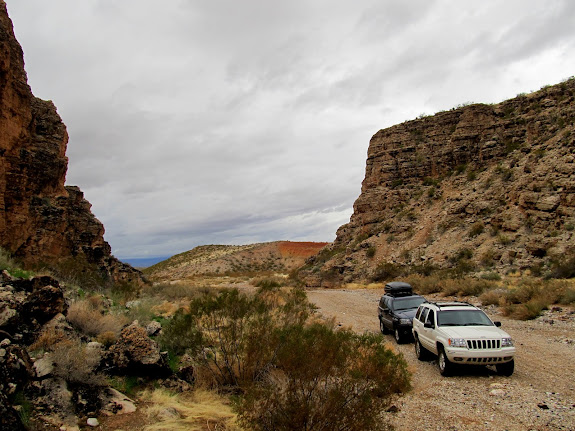 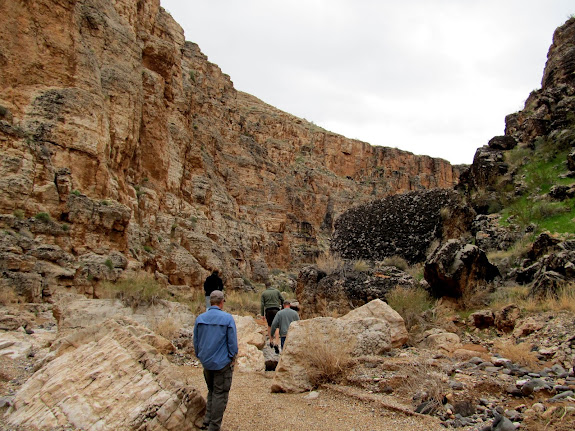 Chris and Karin scrambling on boulders 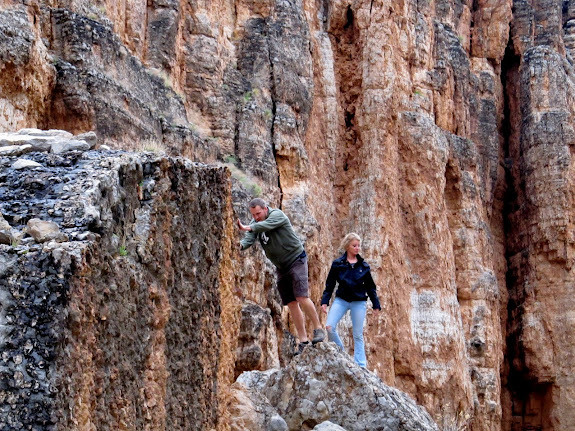 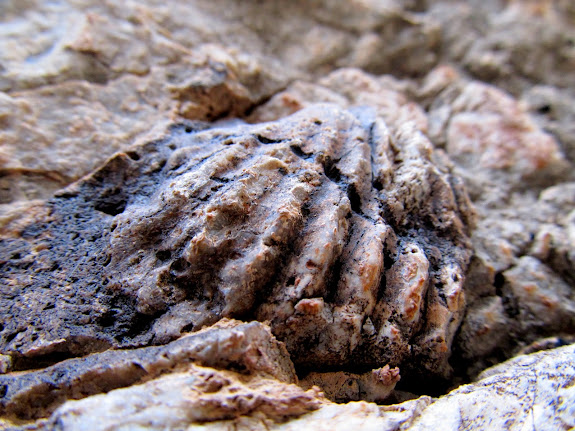 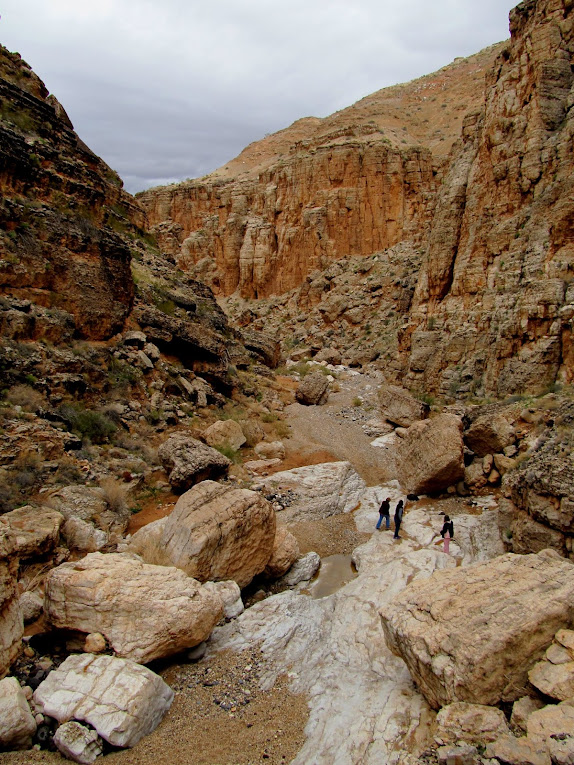 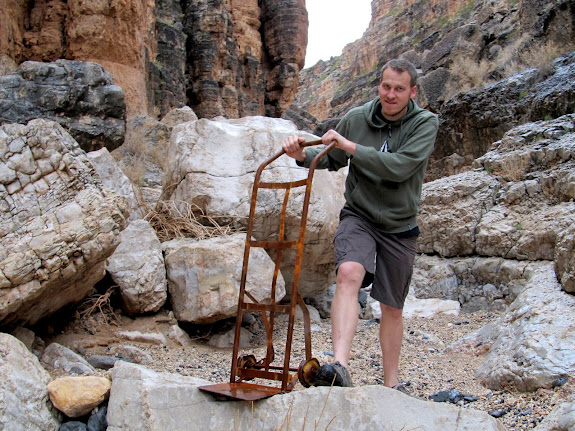 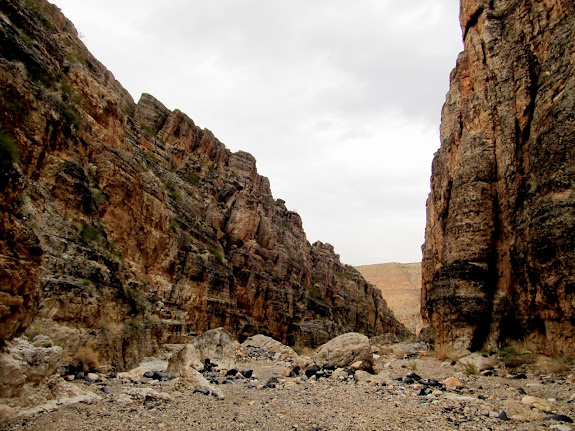 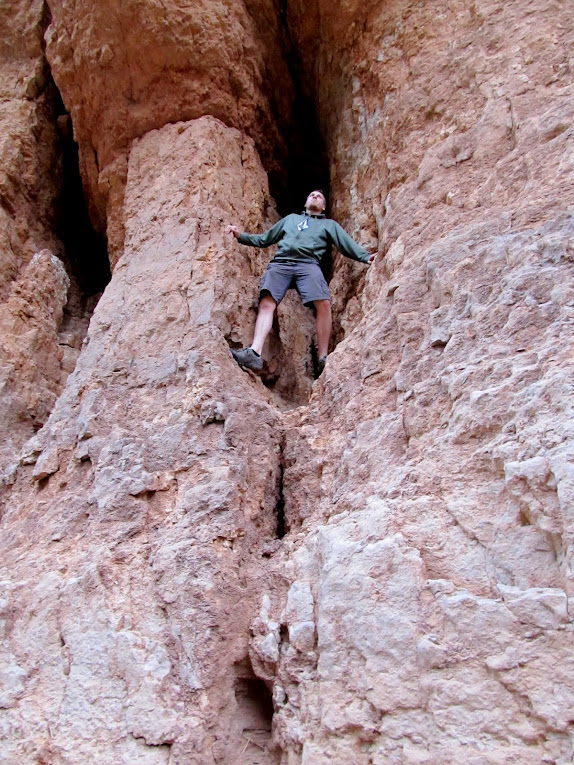 Upper end of the canyon 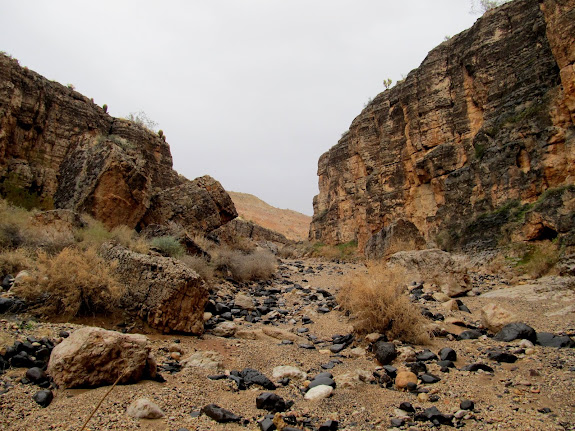 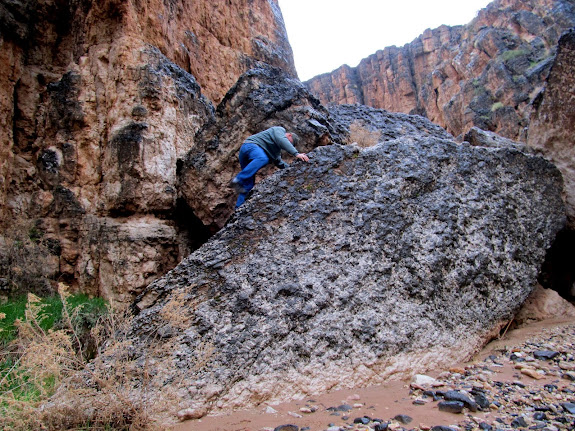