On the winter solstice I’d planned on hiking solo in the San Rafael Swell east of Ferron. Then I learned that Alan was looking for something to do that Saturday, so we planned to hike together with our pups. I took a road that I thought I’d been on in my truck before and was surprised to find it badly washed out, but I pressed on in the Jeep and made it through all the rough spots (I later checked my GPS track from a 2007 trip into the area and realized I hadn’t been on that road). Boulder got a little car sick but I hadn’t fed her yet so at least she didn’t puke. We started hiking a little later than we’d planned due to the slow-going on the road. We dropped into South Red Wash near Hendrick Spring, following the wash downstream and occasionally exiting the watercourse to check the rock formations for rock art, ruins, and cowboy inscriptions. There are many small springs in South Red Wash and we found ourselves walking on ice for much of the way. 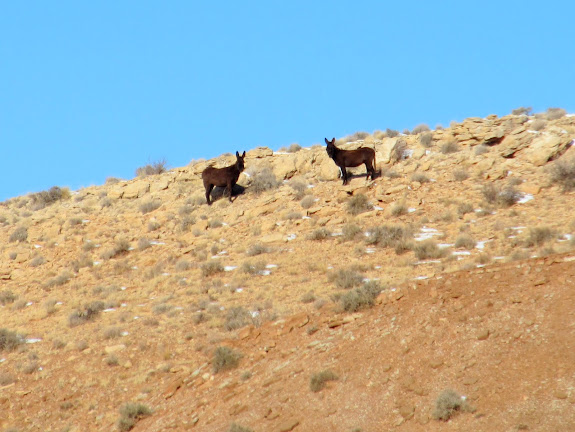 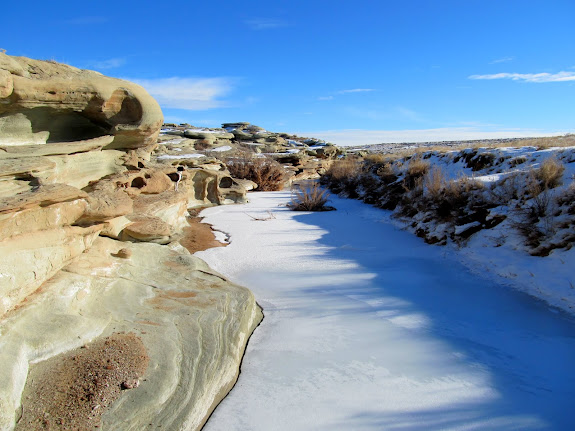 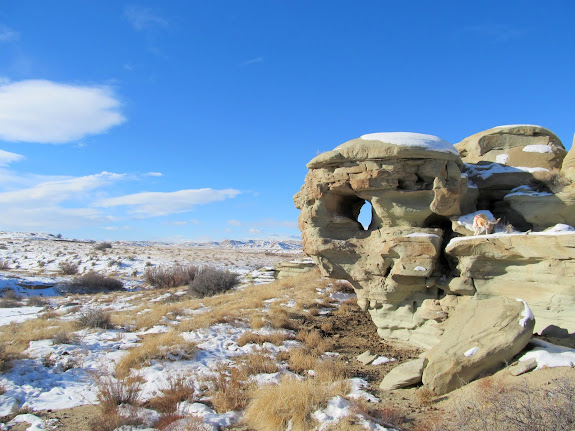 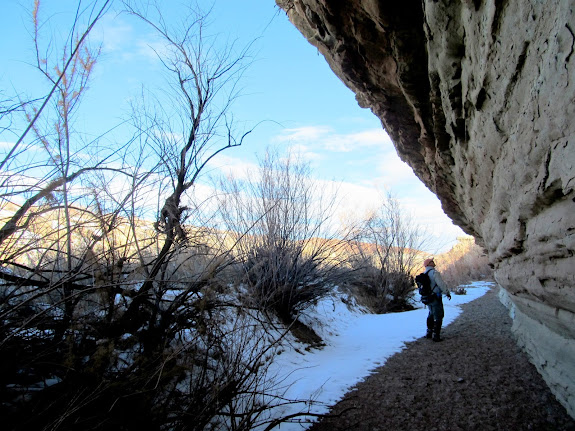 Alan taking the low ground while I search the high ground 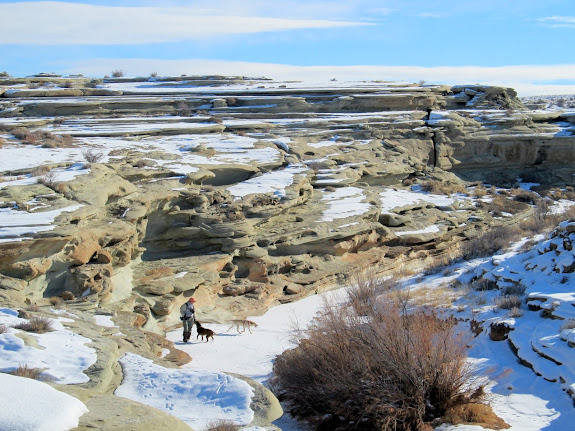 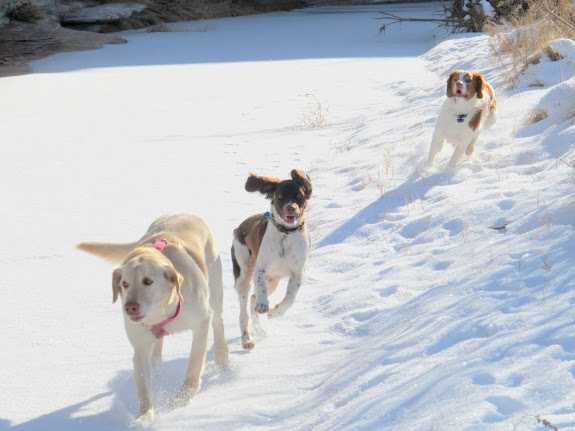 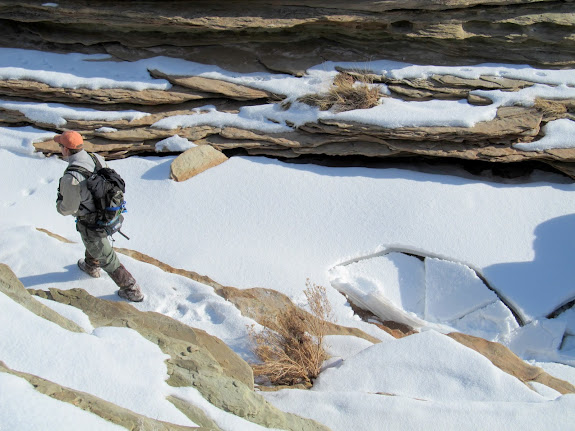 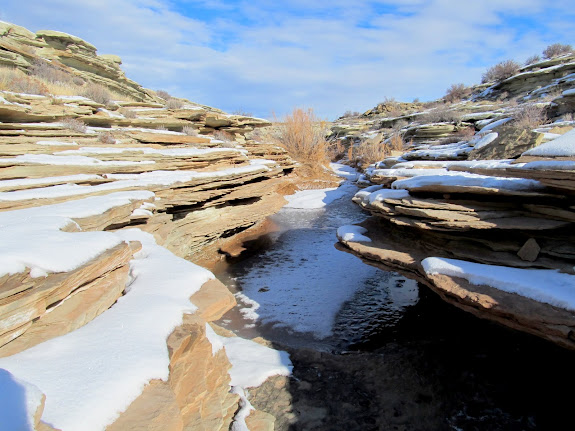 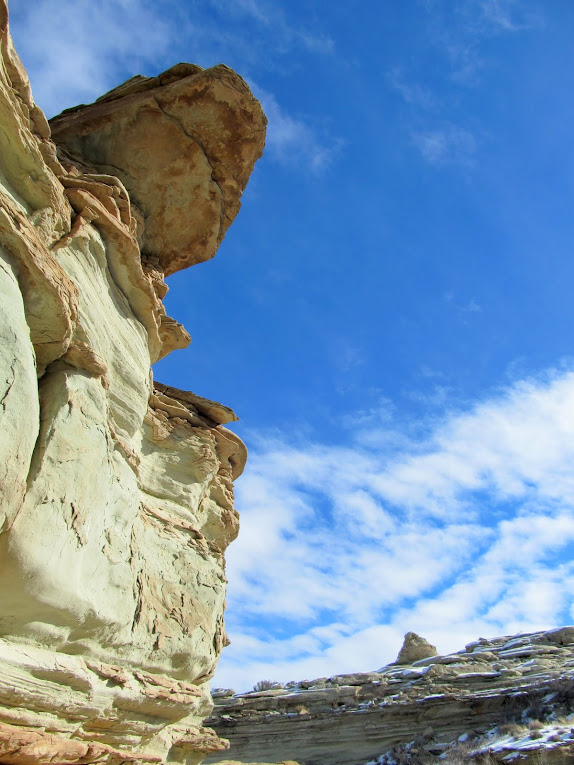 We reached the confluence with Red Wash and decided to head down that wash to visit a geocache that we’d both already been to. Just downstream from the confluence I found a single piece of pottery, which would be the only Indian sign we would see all day. Shortly before reaching the geocache I hopped down off a short ledge onto what I thought was solid ice in a pothole. Instead, the ice was a few inches thick with a large void below it where the unfrozen water had drained out through the sand. I broke through and my right leg scraped down the edge of a slab of ice before I hit the ground below. The slab landed in such a way as to pin my leg, just above the knee, against the vertical edge of the pothole. I could barely lift the chunk of ice off my leg but I couldn’t move from my position without letting go of the ice–I was stuck. Alan was only a short distance away and he lowered his legs over the edge of the pothole and moved the ice with his feet so I could extricate myself from behind it. Perhaps I could have freed myself if I’d been alone, but perhaps not. I’ve now got a large bruise and a few small scrapes going from mid-shin to mid-thigh on the inside of my leg. 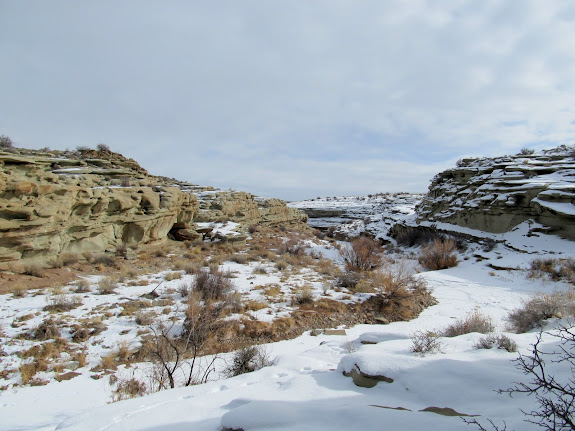 A piece of pottery found at the confluence 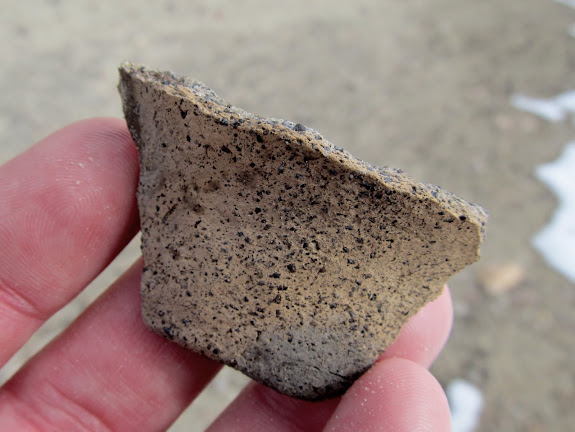 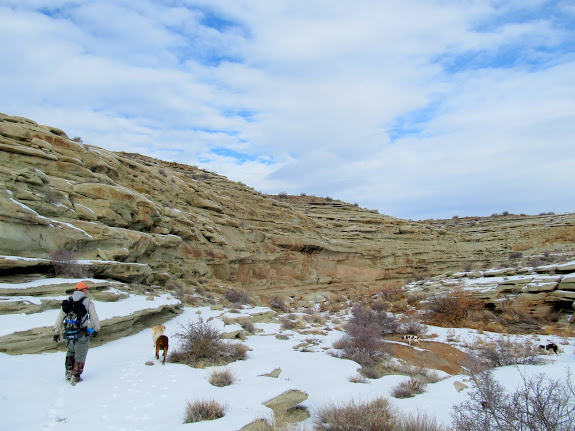 Pothole ice that I broke through 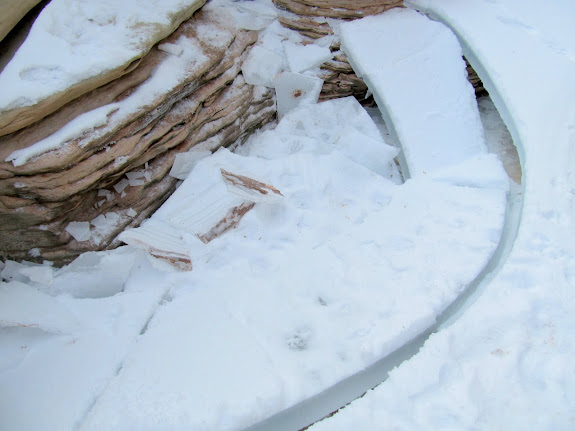 I was a little shaken but relatively unhurt, so we continued down Red Wash. The geocache was just beyond a spring-fed pool of water below a dryfall, and nearby is a checkerboard carved into the rock with an inscription by Will Hambrick. This was actually my third trip to this place and the second time I’d seen the inscription and I didn’t take any good photos of it this time. We stopped briefly for lunch there then retraced our route into South Red Wash and then out a side canyon and up onto Sand Bench to explore some rock formations there. 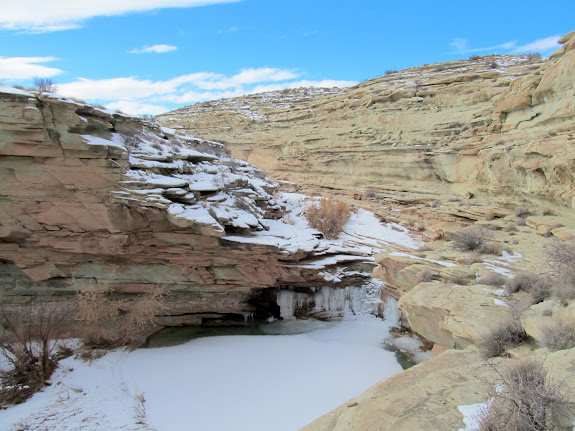 Torrey at the geocache 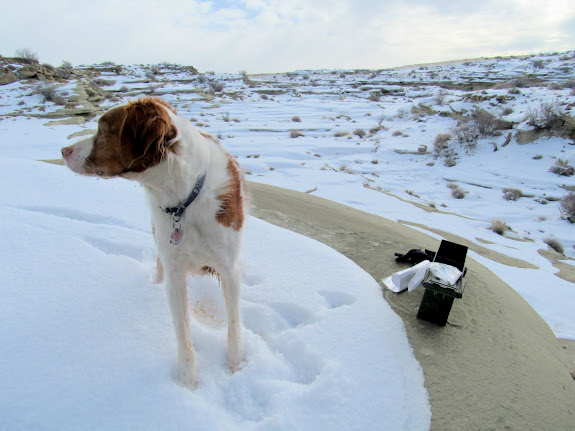 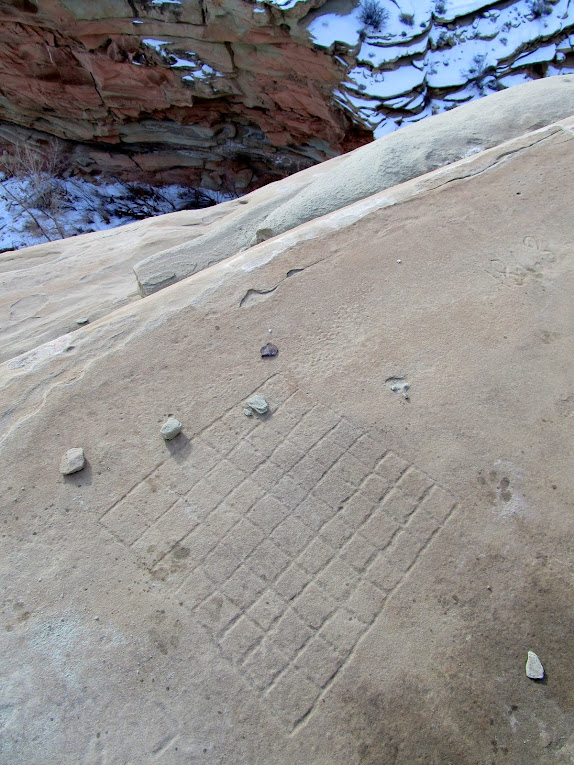 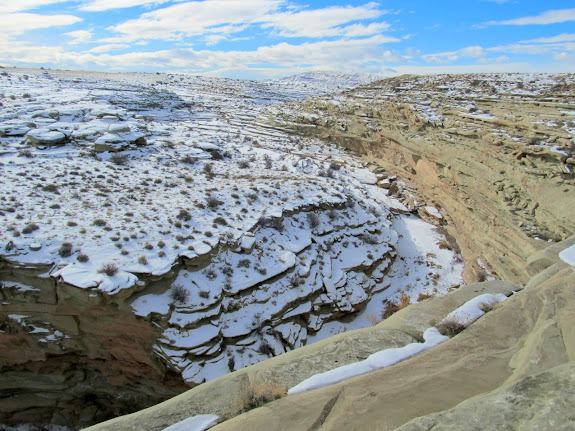 I had been to some of the rock formations on Sand Bench before but at the time I wasn’t looking for rock art or inscriptions and I could have easily missed them if they’d existed. We searched for a while but didn’t find anything other than a single name, “Hix,” carved into the rock. We ended our exploration and headed across the relatively flat and uninteresting Sand Bench back to the Jeep. I took the correct road this time as we drove back toward civilization, which I’m sure the dogs appreciated. 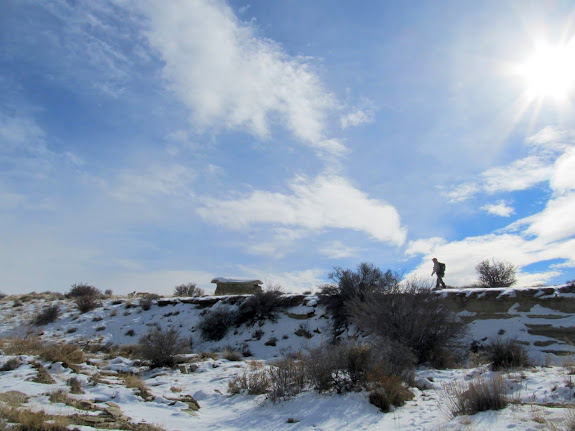 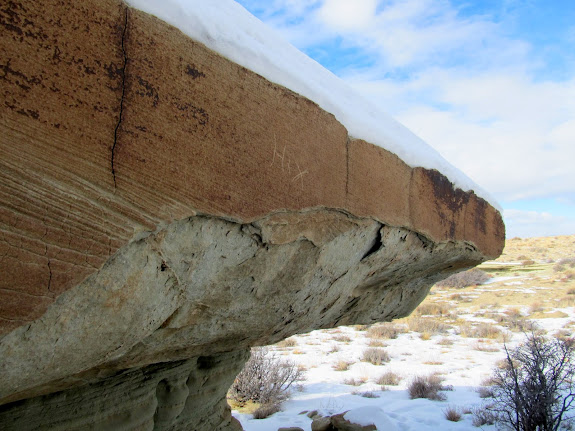 Tunnel-like passage between masses of sandstone 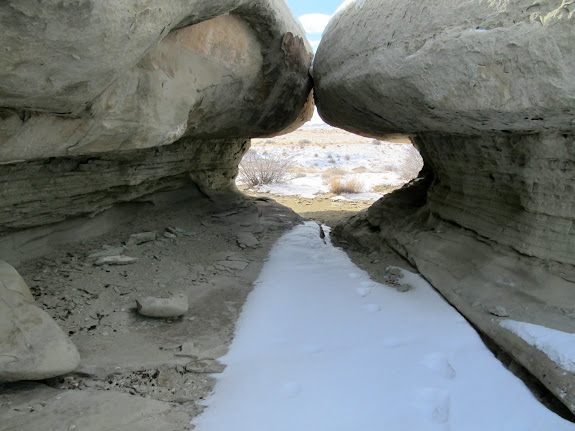 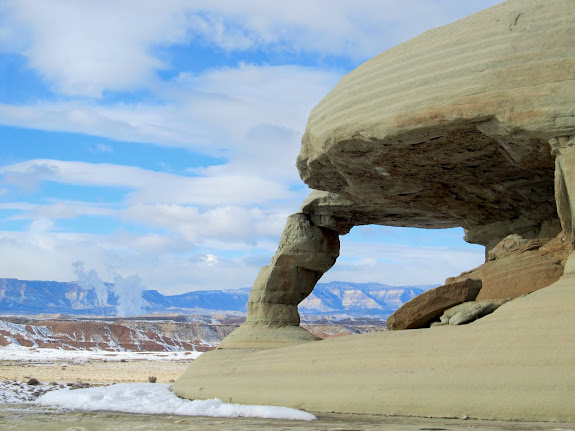 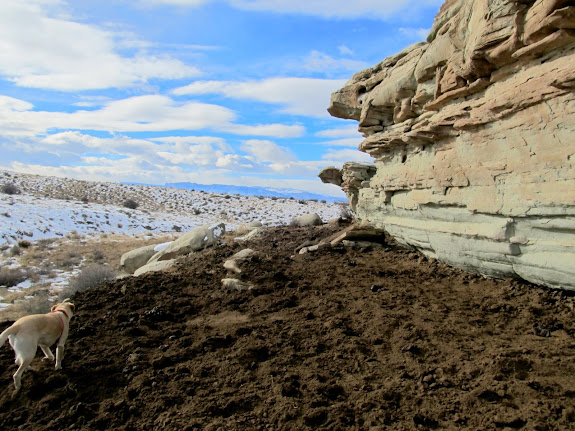 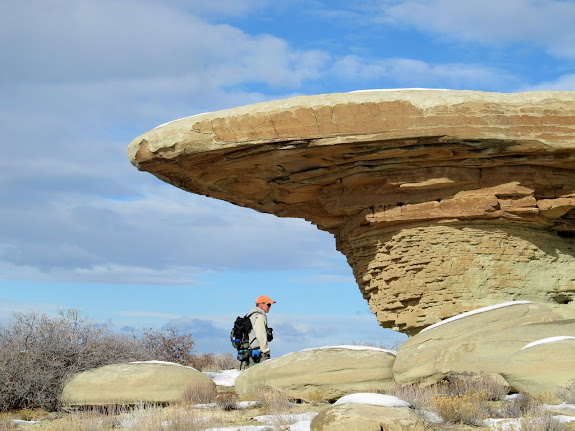 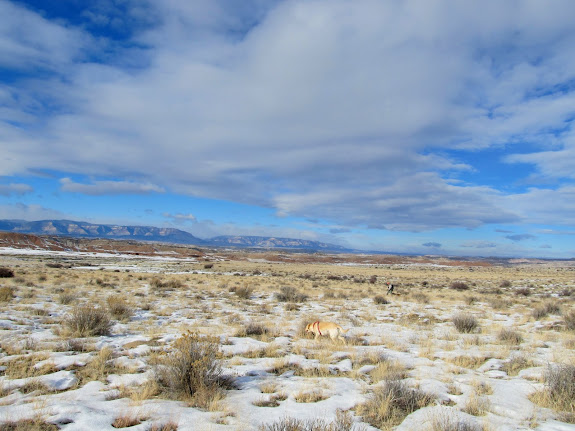