On Tuesday after work I went for a short trip to the San Rafael Swell to find a geocache–a rare new cache that wasn’t right next to a road. I’ve long given up finding geocaches that are near roads unless there’s a compelling reason to do so. This one was near a cache that I’d placed six years ago that involved a short, steep hike up a hillside on the southwestern flank of Cedar Mountain above Buckhorn Flat. It’s an area full of Curtis Formation sandstone, which is my favorite geological formation in the Swell to explore–it’s often filled with fantastical formations like I found on this trip. I had both the dogs with me and Boulder got car-sick during the drive down. The hike started out as an easy walk up a small drainage. Soon the drainage forked and the first fork I tried ended in an impassible dryfall. The other fork also had a dryfall but I was able to bypass it by climbing high on the right and following a ledge to the top. Once above the dryfall I climbed higher in the water course until it leveled out in a bowl-shaped area of Curtis Formation sandstone.

Poor puppy got car-sick on the drive down 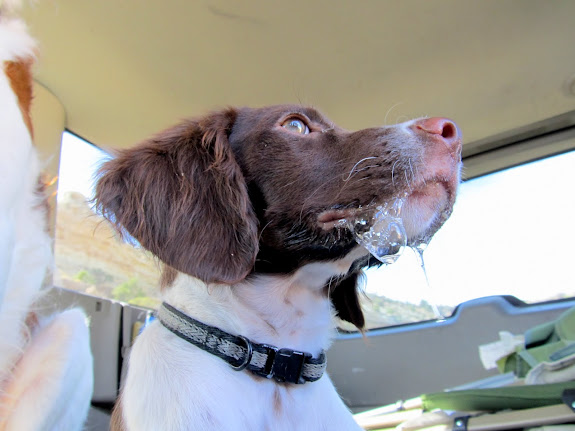 I hiked up this drainage which soon forked 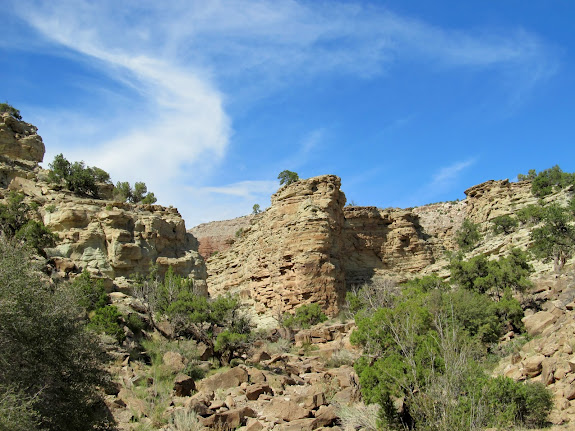 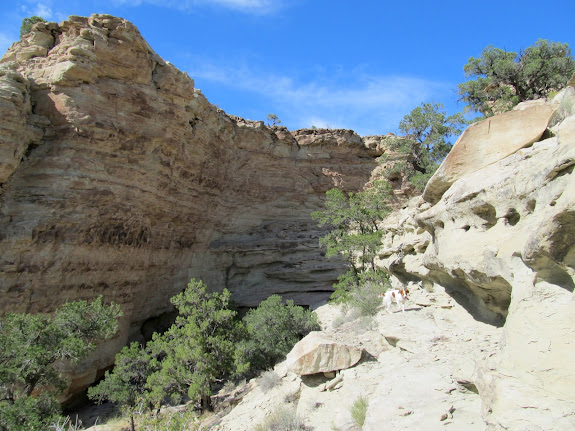 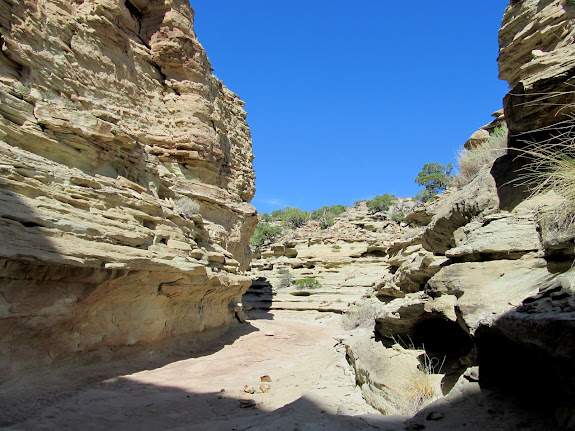 There’s a lot of well-known rock art at the base of Cedar Mountain and I was hoping that by following the drainage I’d find more rock art or habitation sites. One overhang looked particularly promising but held nothing of interest. I let the dogs lie in the shade and gave them a drink, then explored a little more. I eventually climbed high enough to get a nice view over Buckhorn Flat. I saw some trace fossils in the sandstone and followed a few narrow joints in the rock that were like miniature slot canyons. After scouting the area and satisfying my curiosity I ambled over toward the geocache.

Those dark overhangs near the upper-center looked promising, but were devoid of writings or signs of habitation 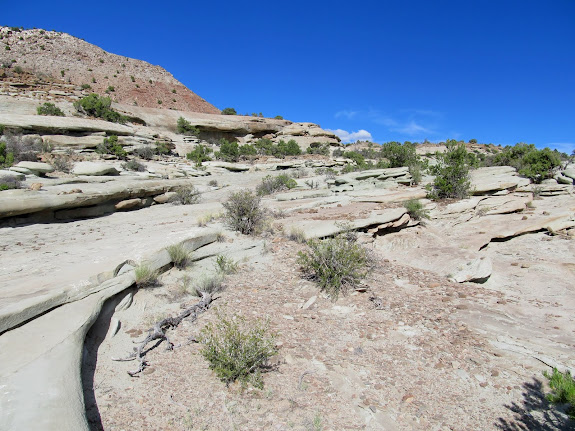 Torrey and Boulder shading up under the overhang 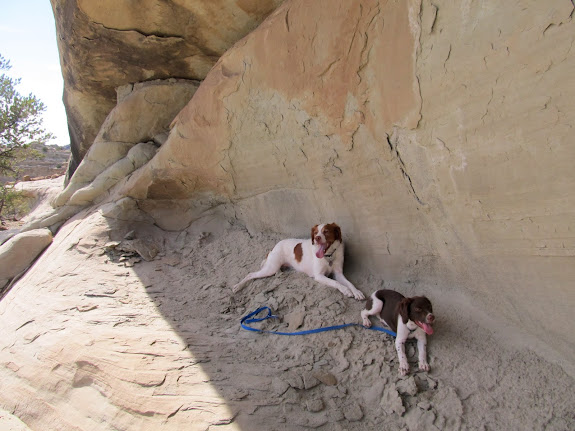 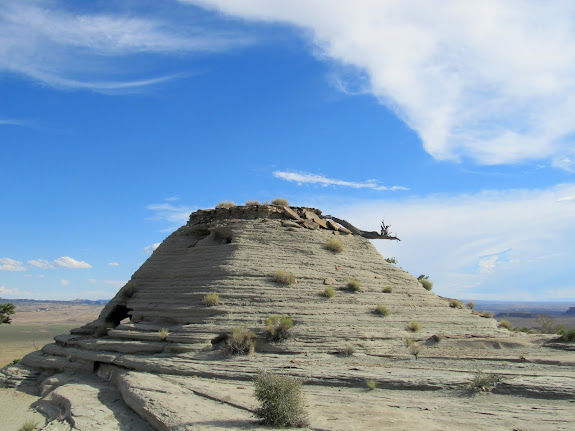 View through a small arch 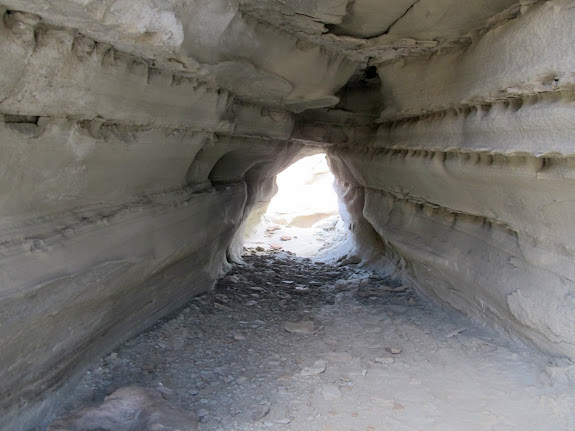 View out over Buckhorn Flat 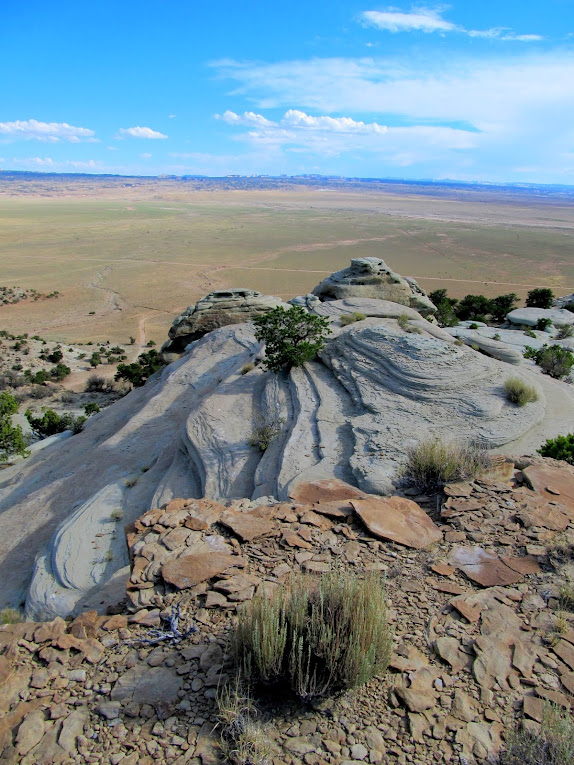 Cedar Mountain and Buckhorn Flat, with Buckhorn Wash in the distance on the right 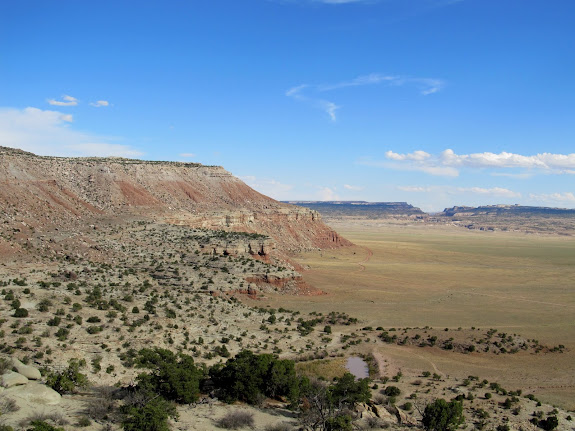 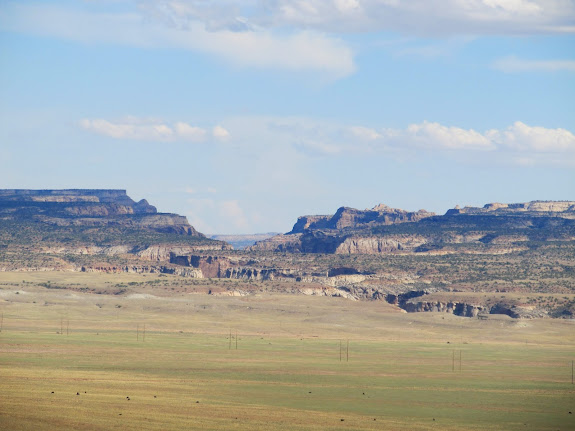 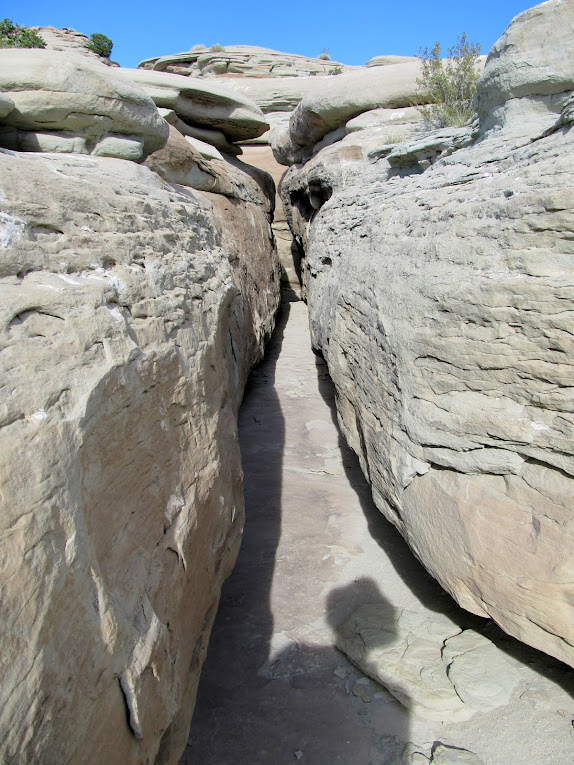 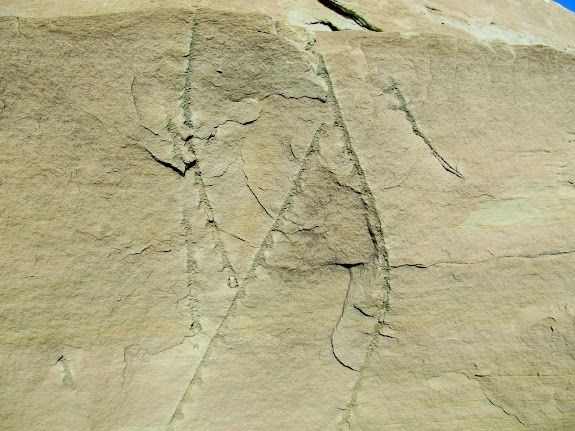 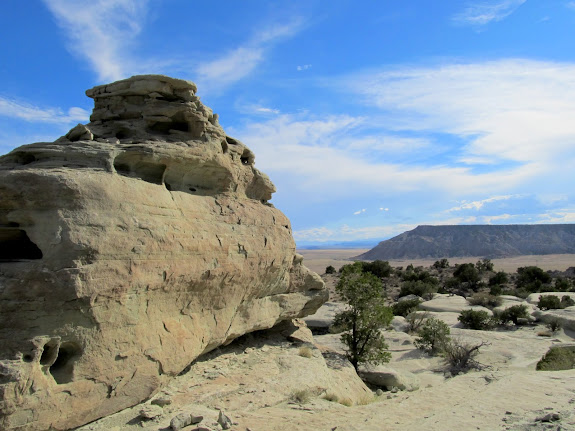 When I was 400′ from the geocache I found myself at the bottom of a vertical cliff. I followed the base of the cliff south and lost a little bit of elevation until a break in the cliff allowed me to get on top. Then I followed the ridge north until I neared the cache site. Despite being a tiny “nano” container I found it easily thanks to a photo hint from the geocache listing. 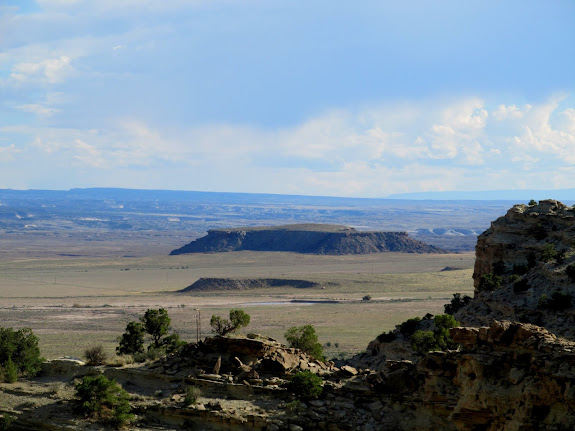 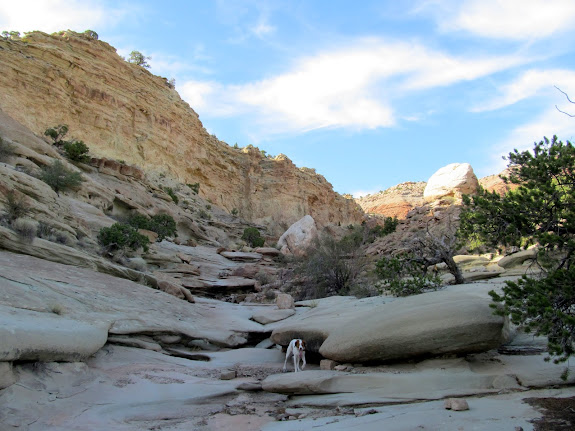 Buckhorn Flat and a mushroom rock 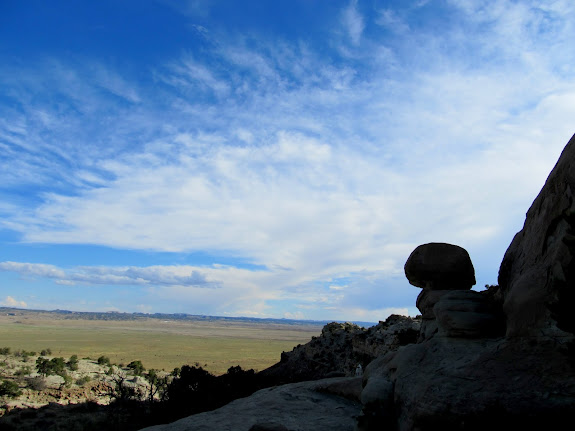 Fossil in a small rock 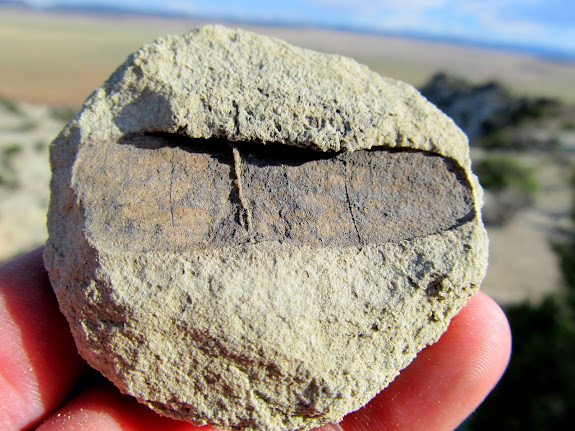 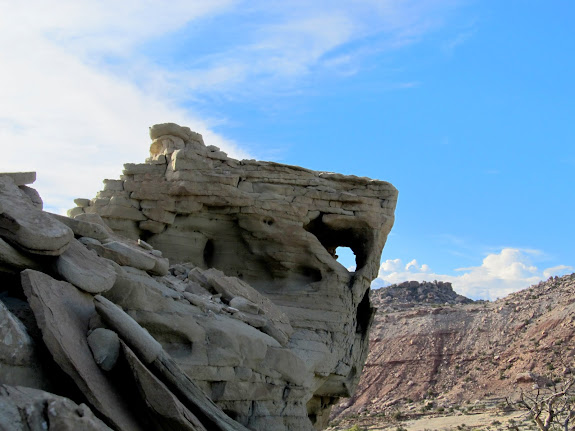 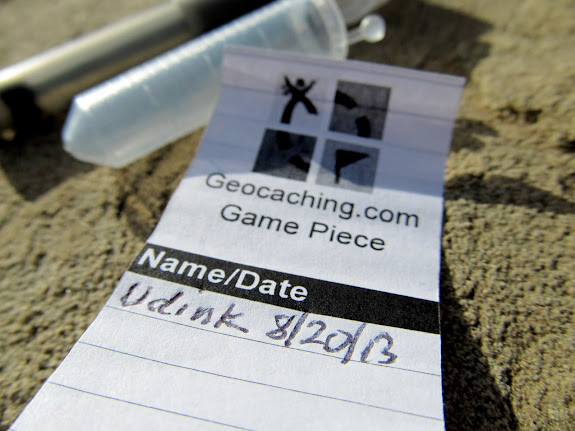 I wanted to explore more but Boulder was obviously hot and tired. I made a beeline for the Jeep. There was a steep and rugged descent back toward the Jeep and I let Boulder off her leash for the rest of the hike. She’d done well while on-leash until then, only needing my help to get up and down several tall ledges. She followed Torrey and me down the hill and needed a little coaxing to descend some of the rougher parts and to find the right line down through some ledges. We’d hiked about 2.4 miles in as many hours which, for the puppy, was a good accomplishment. I made a few stops during the drive home to ensure that Boulder wouldn’t get sick again. One of the stops was at Buckhorn Reservoir which was almost as full as I’d ever seen it. I saw thunderheads building far in the distance in all directions, though it was clear overhead. That evening at home we had one of the most intense lightning storms I’ve seen in a long time, far eclipsing one earlier this month. I almost wish I’d still been in the desert for this one. I’d imagine, though, that it wasn’t a friendly time for interlopers. 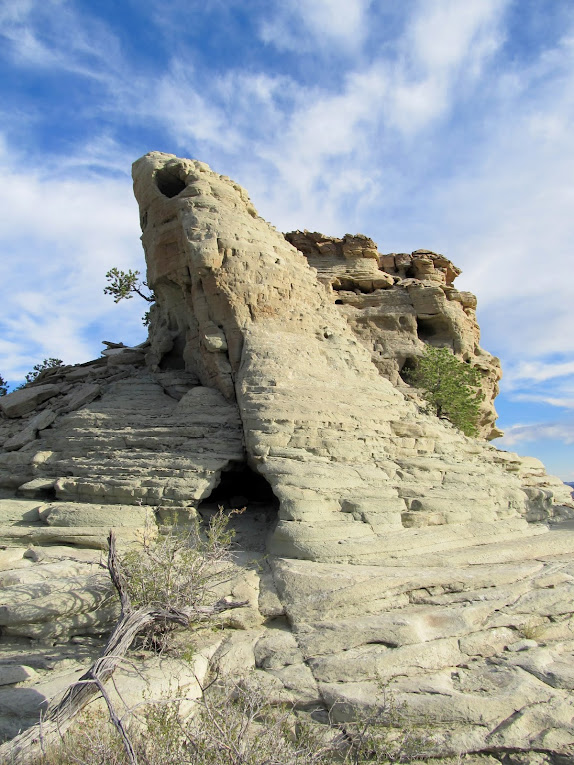 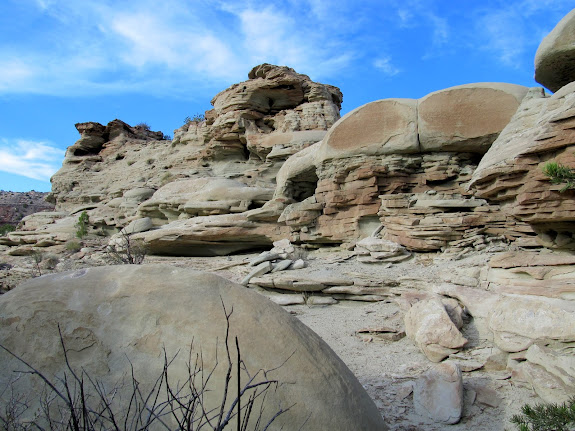 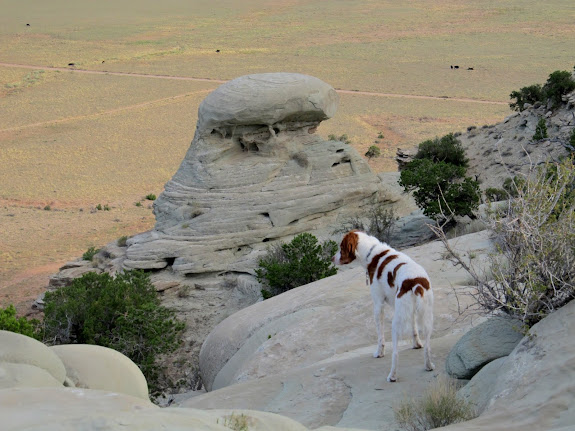 View of the two drainages near where I started the hike 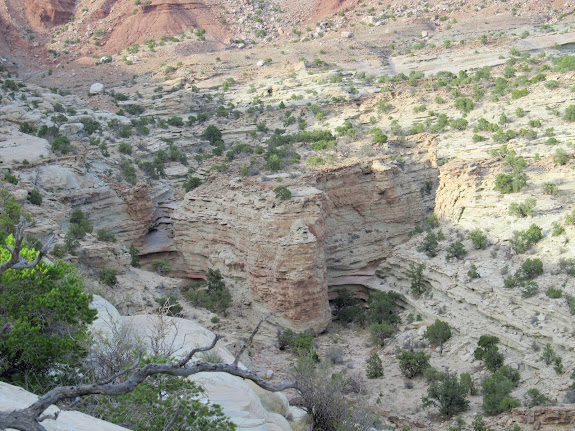 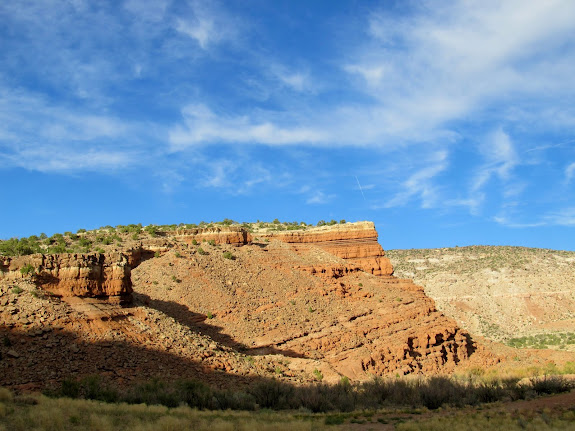 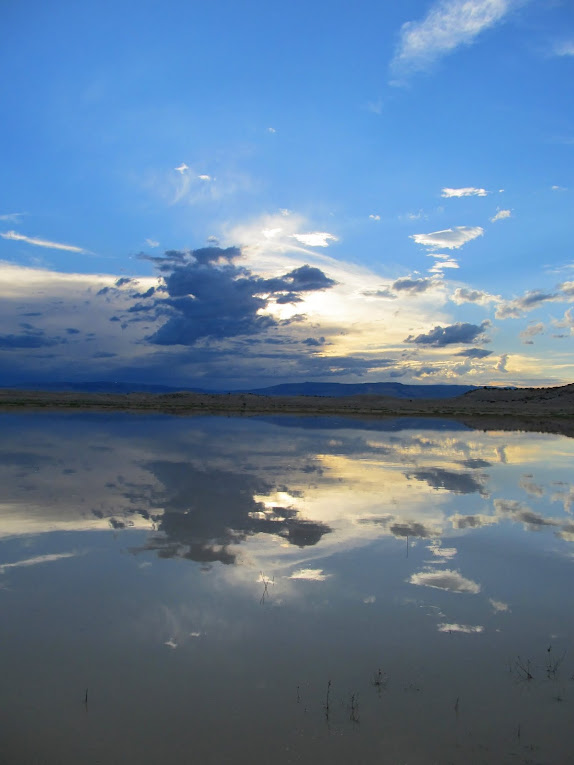 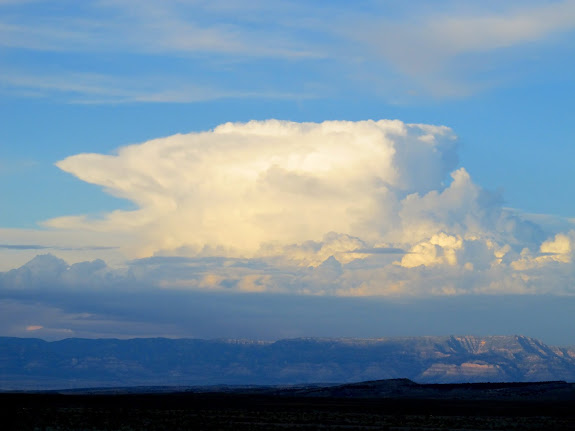 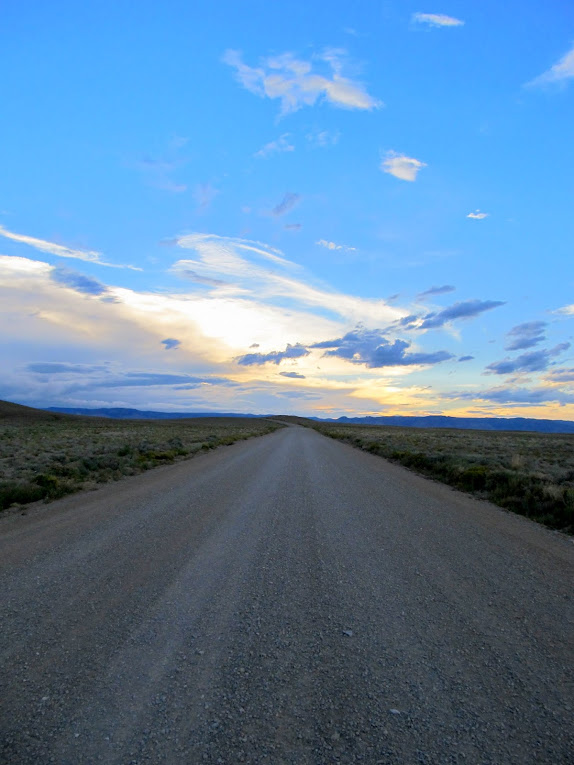