I decided on Sunday that my family should take a spur-of-the-moment trip to Swasey’s Beach on the Green River, just north of the town of Green River. While Traci was still in church, the kids and I loaded our gear into the Jeep and I made a trip to the store to grab some lunch and snacks. Shortly after Traci got home from church we were on the road and heading south. The forecast called for a 50% chance of thunderstorms, though we spent a couple of hours at Swasey’s Beach and had warm temperatures and partly cloudy skies. There was a huge group of people camped nearby but they spent all of their time gathered under large canopies near the parking lot and we had the beach mostly to ourselves. I later found out that the group was there planning for a protest at a nearby tar sands mine the following day.

Battleship Butte beyond some fields

Woman reading a book in the Green River 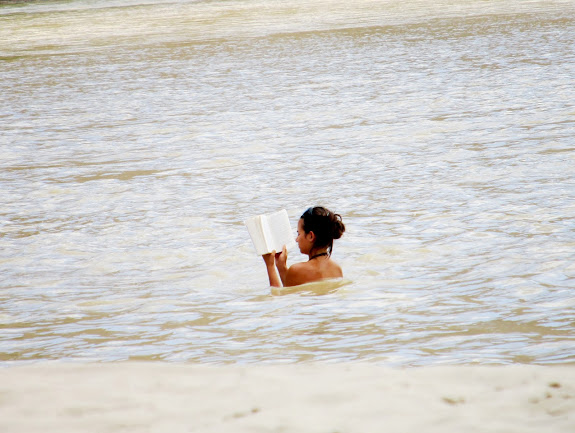 My family out for a swim 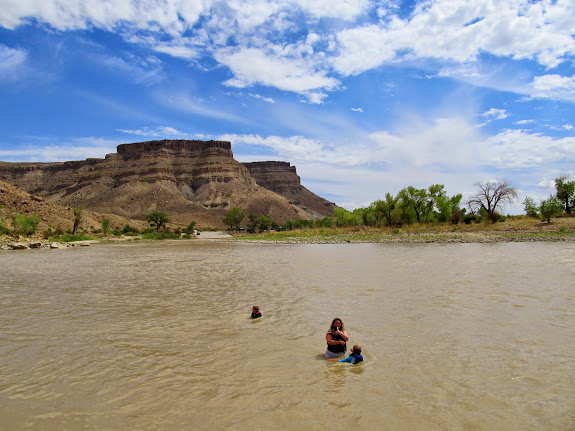 Bradley and Boulder at Swasey’s Beach 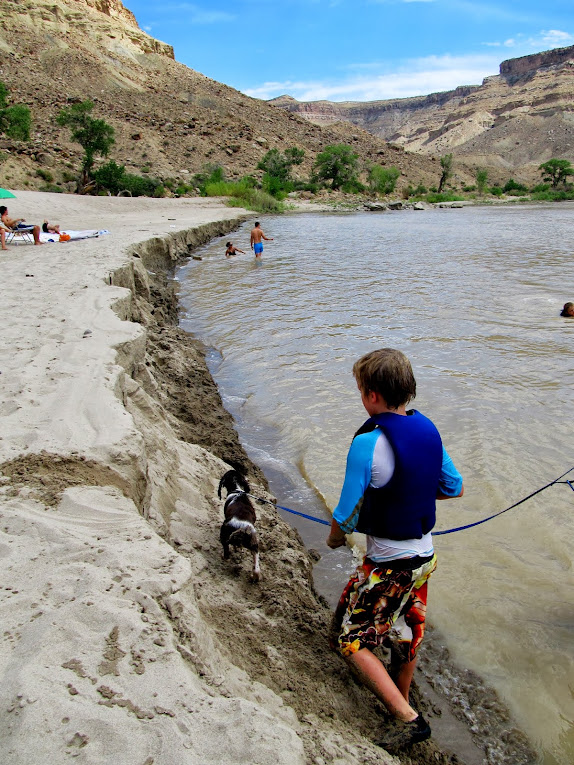 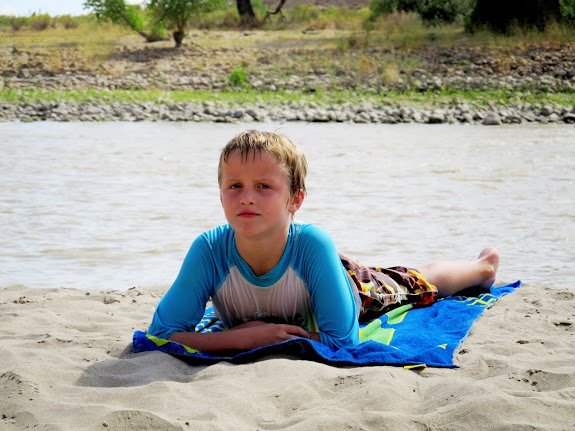 Michael keeping entertained with a water bottle and some mud 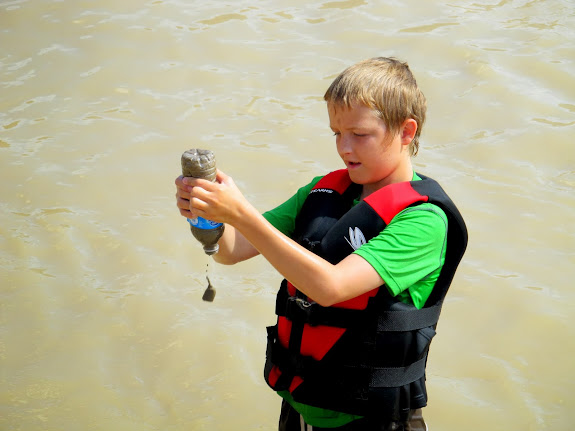 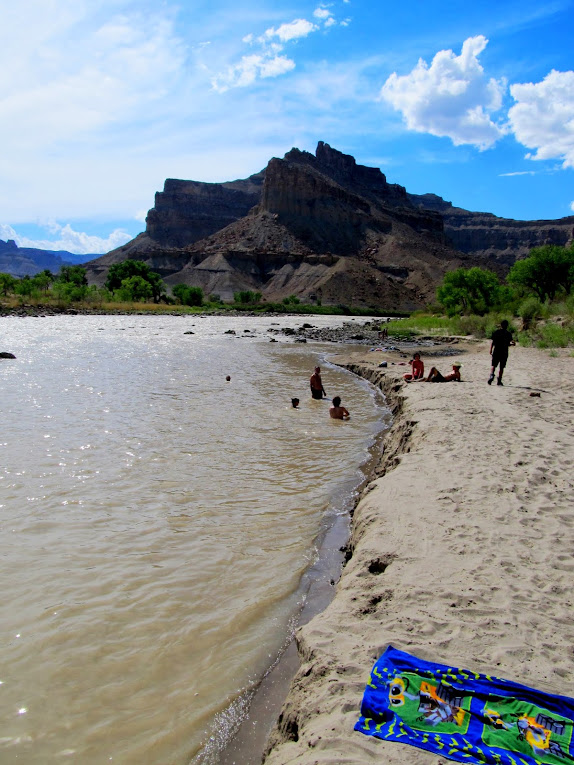 Boulder’s dirty snout after digging in the sand 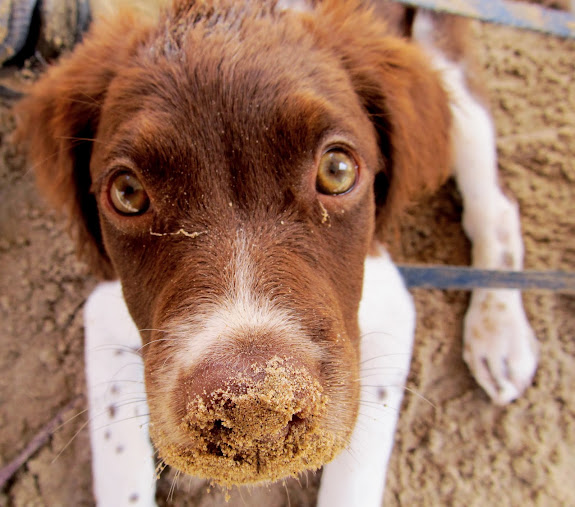 Once we all had our fill of swimming and beach-going, we ate a late lunch in the Jeep (since all the campsites were full). I then drove us up the road to find some rock art and a couple of geocaches. We stopped to look at a stone cabin, namesake of the Stone Cabin Rapids on the river. Farther up the road we visited the petroglyphs at the Price River confluence and others near Nefertiti Rock before turning around. On the return trip we stopped again at the stone cabin for a quick bite to eat. A dark storm moving in from the north shortened our stay there, however.

Toilet near the stone cabin–great location for a geocache! 🙂 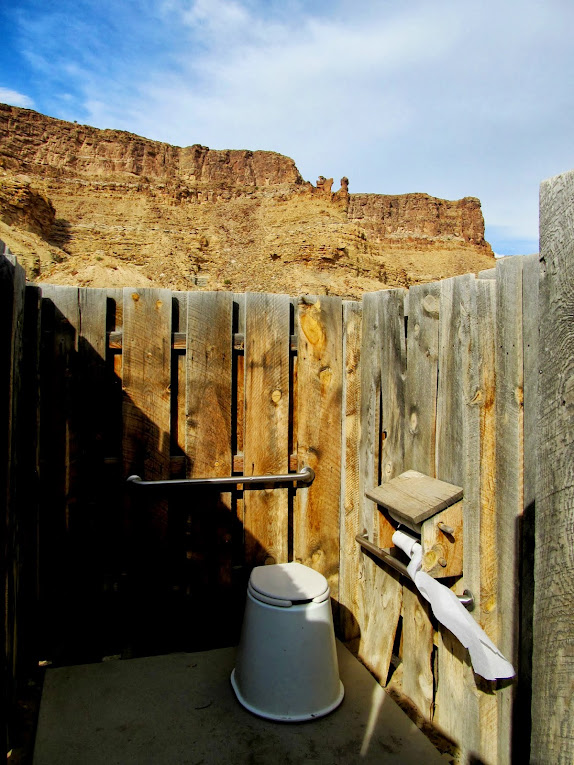 Inside the stone cabin 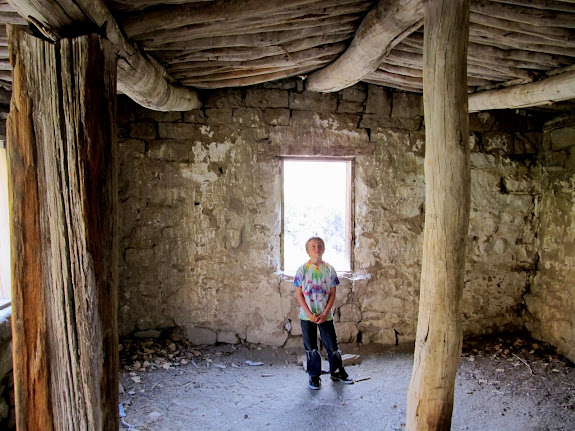 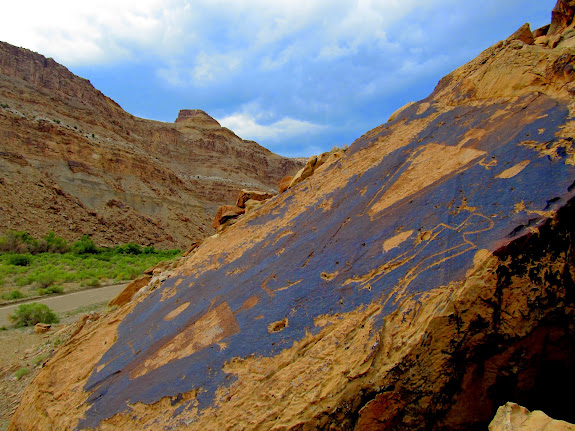 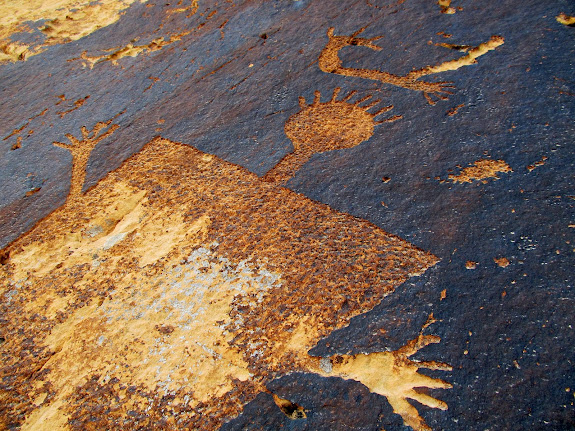 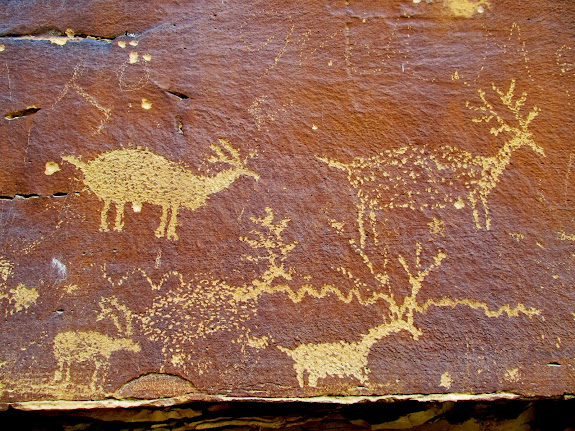 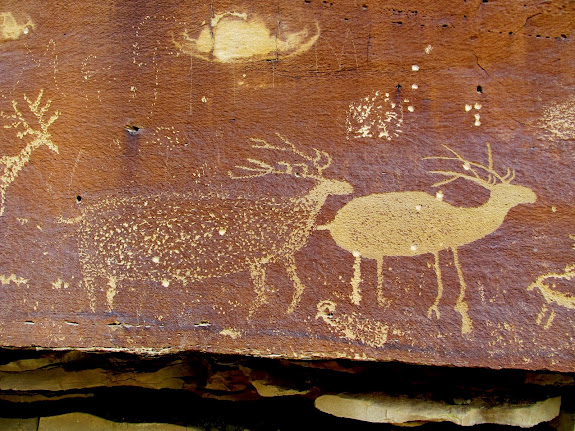 Dark storm moving in from the north 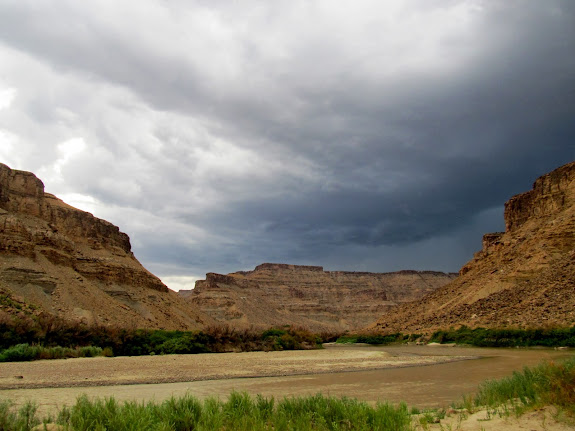 Stopped near the stone cabin for a quick snack 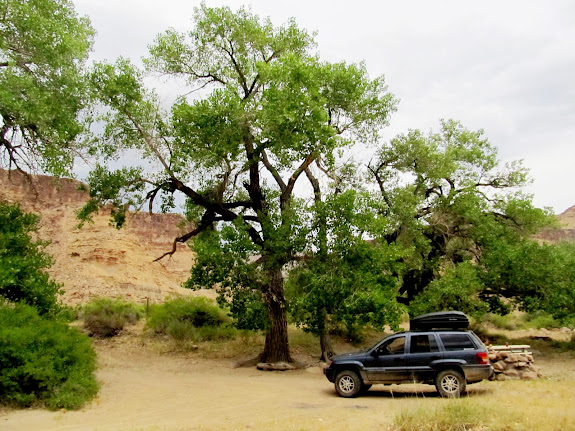 Back in Green River we stopped at Ray’s Tavern for a couple of orders of fries for the drive home. During the drive north on Highway 6 we ran through the storm that had been moving its way south. I couldn’t help but stop several times to take photos of the amazing storm. The lightning was so frequent and long-lived that I was able to get several hand-held shots of bolts striking the ground. When we emerged on the other side of the storm, after a heavy downpour in the center of it, the sun peeked out between the clouds and the horizon for a wonderful light show.

No dumping of human feces 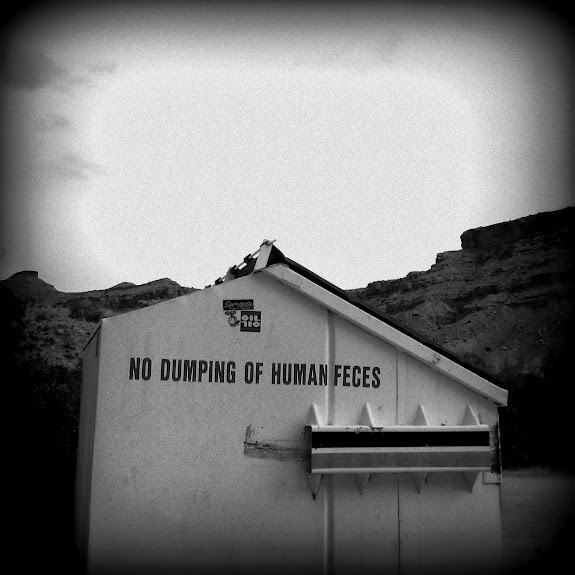 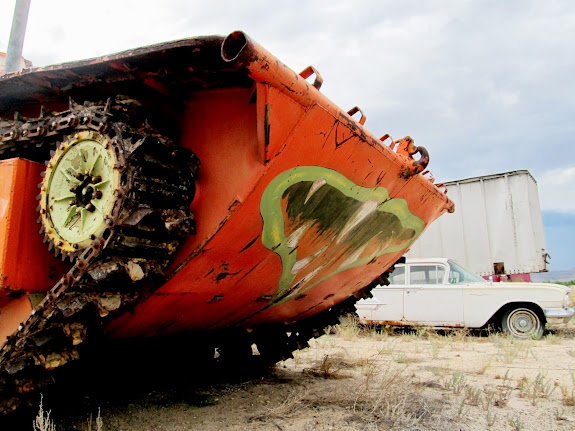 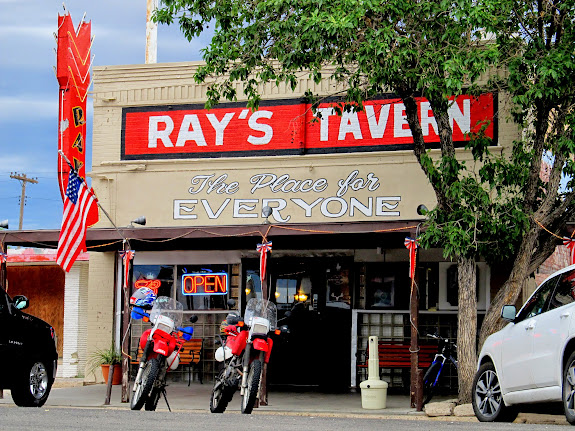 Leading edge of the storm during the drive home 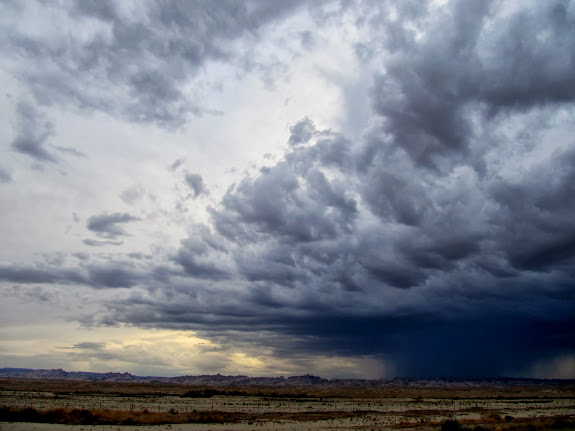 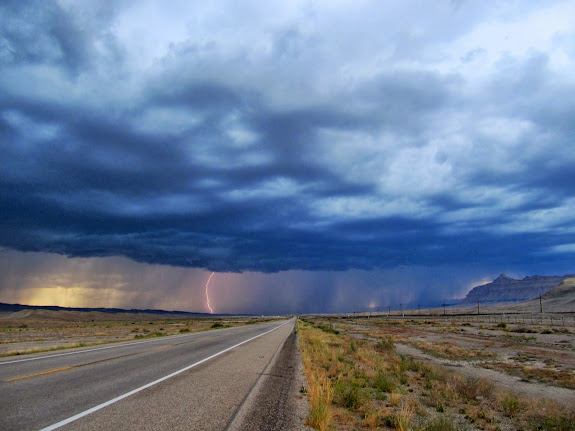 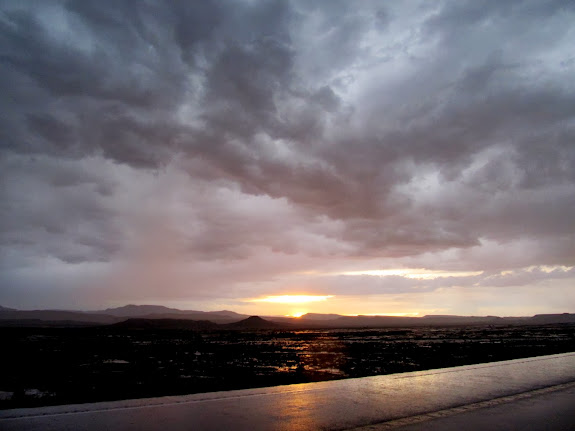 Rainbow over the Book Cliffs 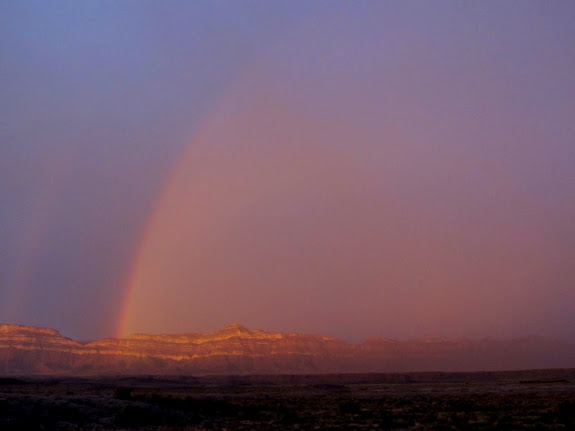 Amazing sunset behind the storm 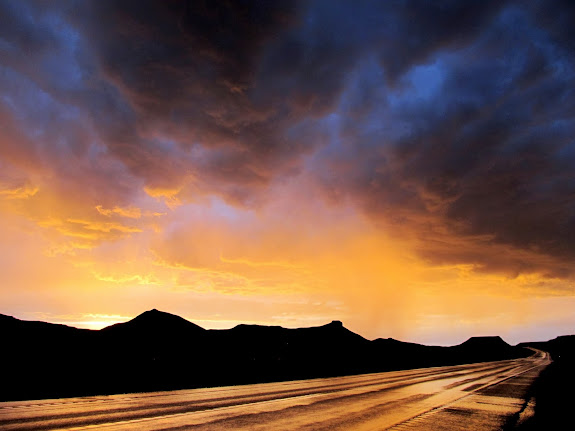