I set out with Alan on Saturday in an attempt to reach the arch in Spring Canyon (the one near the head of the left fork, not the one at the confluence with Nate’s Canyon). The trip was Alan’s idea–we were originally planning on a Cedar Mesa overnighter with new friend Terry, but with worries about cedar gnats we lost a man and opted for a shorter, closer-to-home trip. We were hoping to reach the arch from the top with only about 12 miles of hiking, in comparison with the nearly 20 miles it takes to get there from the bottom. With a 6:00AM start from Price, we were hiking by 7:45 at the south end of Box Flat. The first 2.5 miles was a repeat for me, as part of the route I’d hiked last year to Point 6,648′. It was pleasantly chilly as we hiked south along the old road, shaded by the cliffs to the east. We broke into the sun near the head of the east fork of Red Canyon and continued following the old road, now a horse/foot trail that, judging from the tracks, sees infrequent use. There were a lot of colorful wildflowers along our route. I stopped often to photograph flowers or to inspect rocks on the ground, and I found three broken stone points. 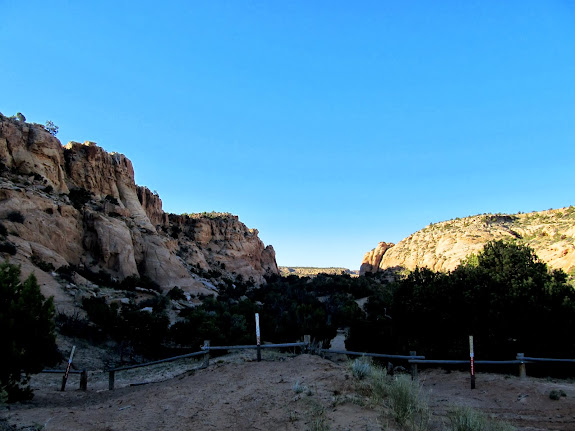 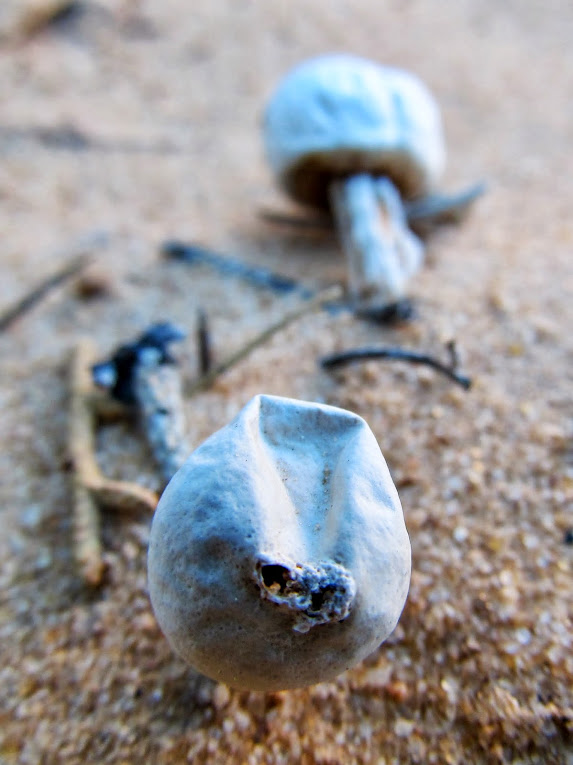 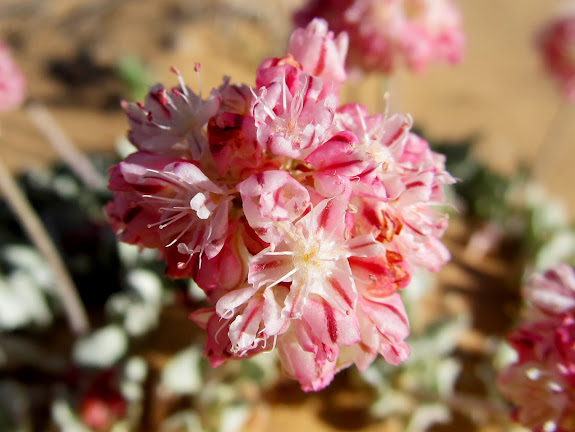 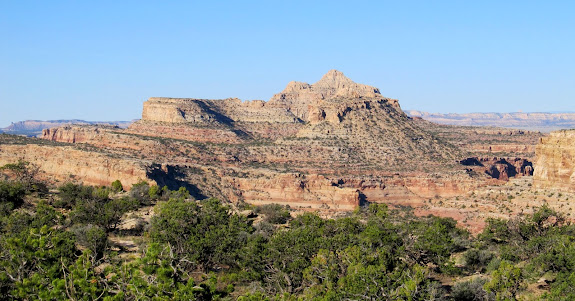 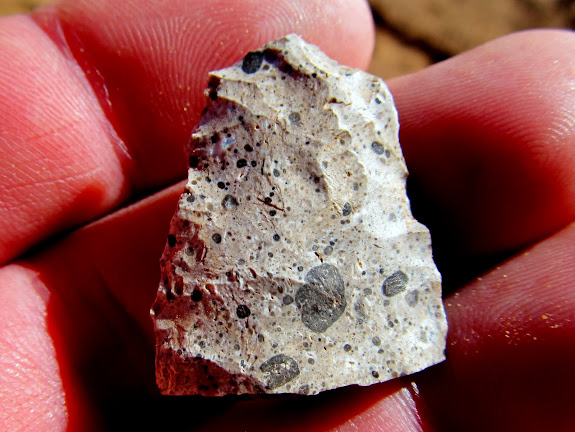 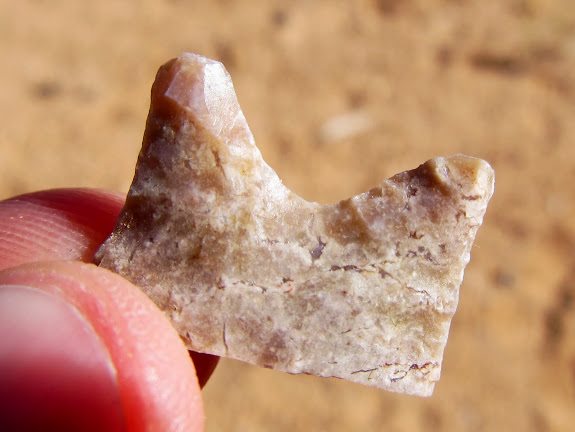 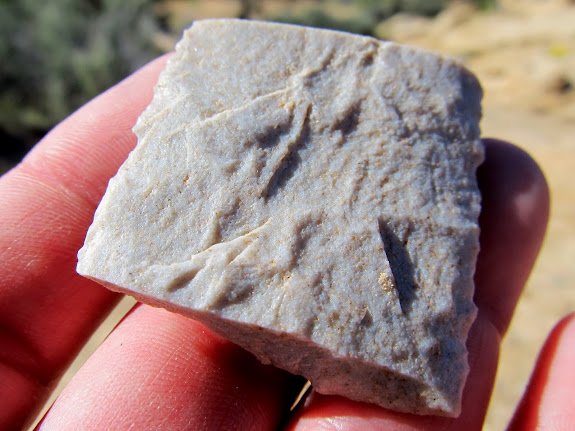 Three peaks beyond which is our goal, but first we must skirt around the right fork of Spring Canyon 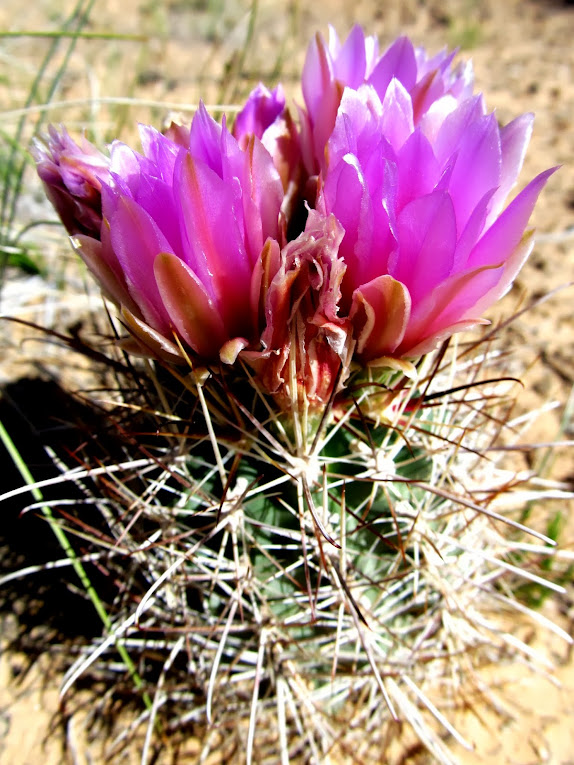 We got to a break in the cliffs at the head of the right fork of Spring Canyon that I’d spotted during my last hike. I thought it would lead us down into the canyon and make a nice shortcut to the left fork of Spring Canyon. We couldn’t tell until we’d partially descended the gully that it was impassible due to some cliffs. Alan and I climbed back out and followed the rim southeast until we found a suitable break in the cliffs that, after some scrambling/sliding, eventually led us into the bottom of the canyon. We followed the canyon for a short distance then climbed to a plateau topped with sandstone domes at the head of the left fork of Spring Canyon.

I’d hoped to get down this chute to cross the right fork of Spring Canyon, but it was too cliffy 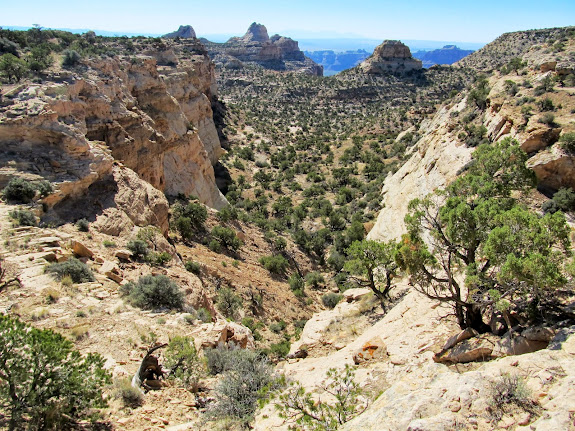 Scrambling down some ledges 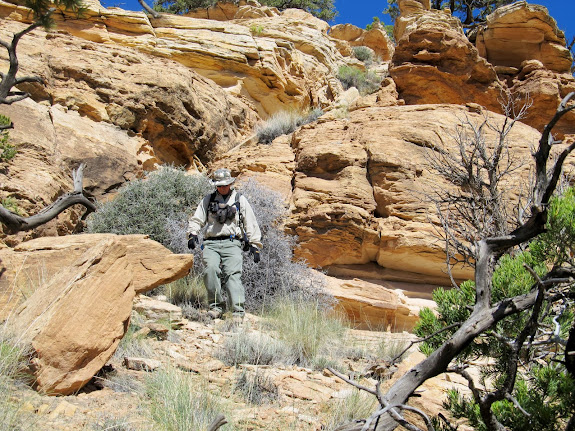 Scrambling down into the right fork of Spring Canyon 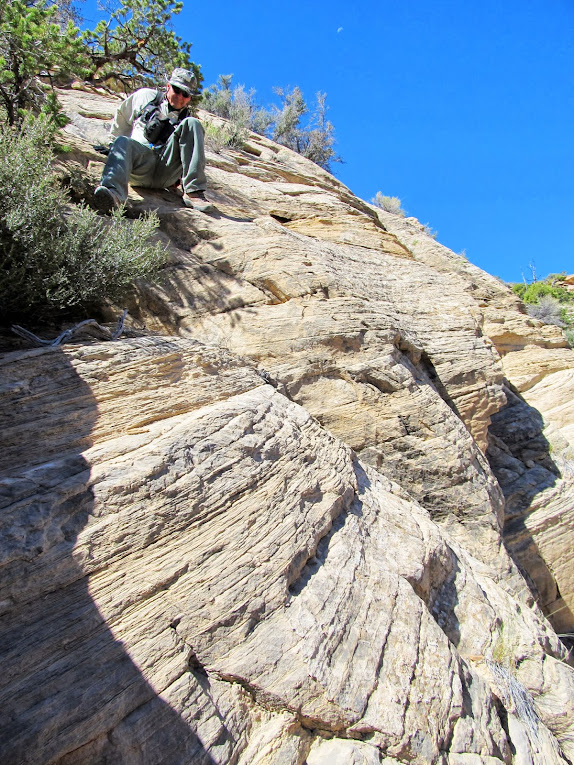 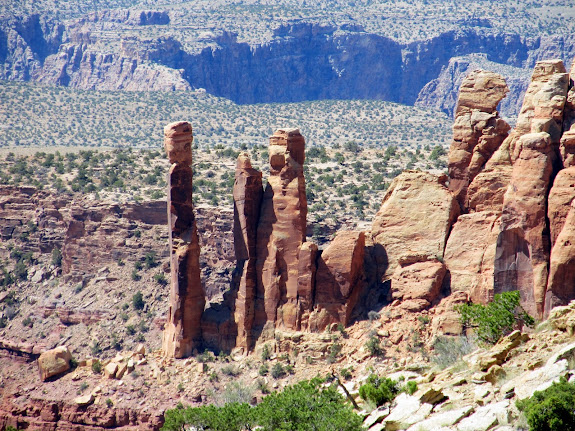 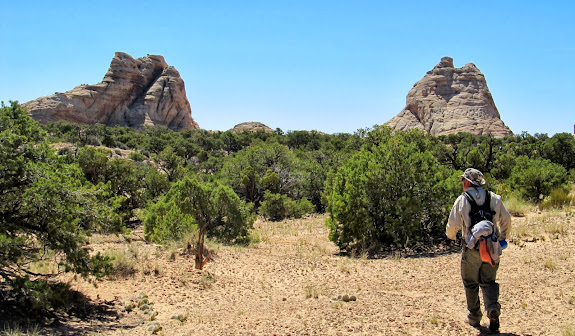 The domes marked the end of my certainty regarding further travel toward the arch. Everything up until that point looked doable from my research, but the terrain east of the domes was very rugged. We took our first rest break in the shade of one of the sandstone domes and then continued east hoping to find a way down into the left fork. We found ourselves atop a cliff looking down into the canyon with no way down. We tried another ridgeline to the south that extended into the canyon and ran into more cliffs blocking our way east. We then hiked to another ridgeline to the north and decided to follow it east. It didn’t look promising that we’d be able to access the canyon from there, but we knew from a Panoramio photo in Google Earth that we’d at least be able to see the arch from across the canyon if we continued east. 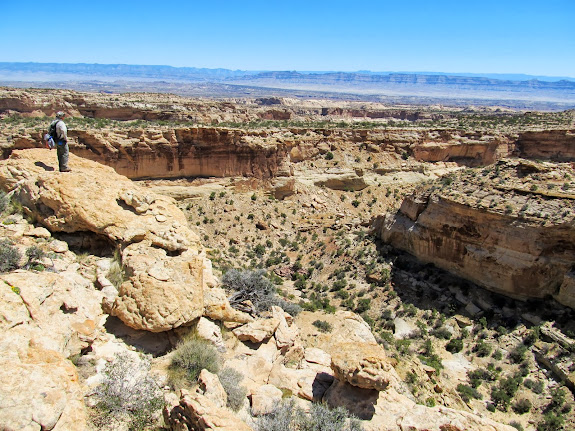 Amazing views over the Swell, with Lone Rock and Mexican Mountain 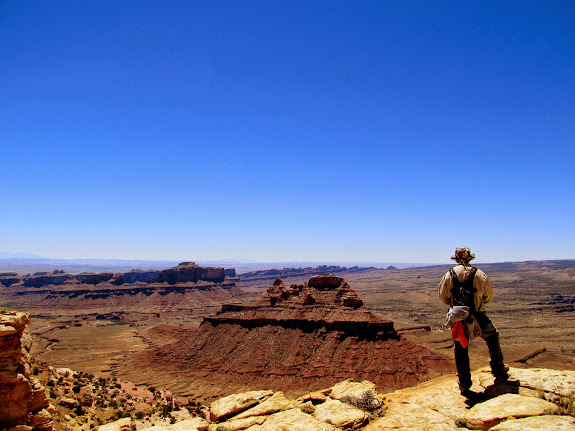 I can’t identify this plant, but the entire width of this one is about two inches. Very tiny and beautiful. 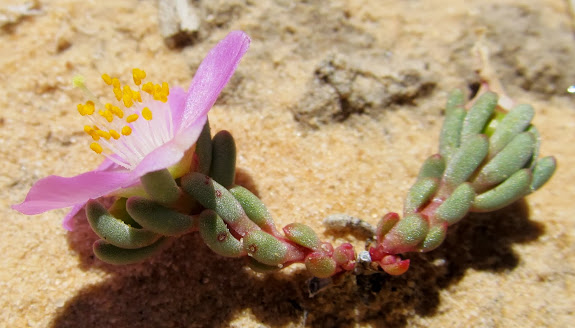 While following the ridge and looking off into the left fork of Spring Canyon, I noticed a possible route into the canyon near where we’d first attempted getting down. It wasn’t visible from above, but from across the canyon it looked doable. It was too late in the day to try it, though, so we decided to continue in our current direction and get to a spot where we could view the arch from a distance. Alan and I did just that, and rested up a bit while we photographed the arch. It was a third of a mile across the canyon, and I took a lot of photos of the far canyon rim to help in planning a route when we eventually return–I really want to visit the arch up-close! 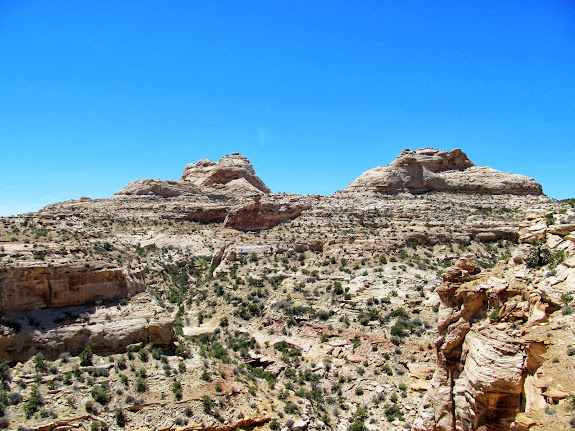 Inside a Prickly Pear Cactus bloom 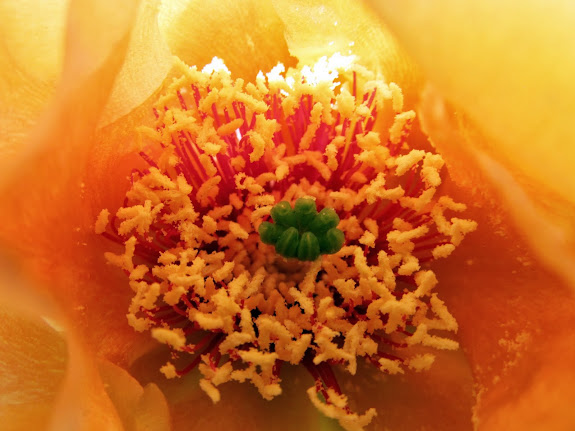 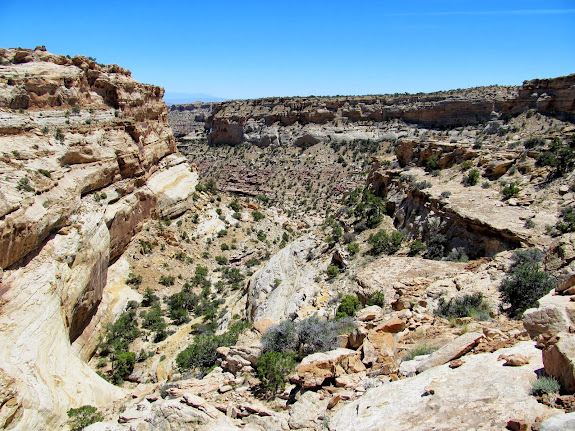 Torrey on a toadstool 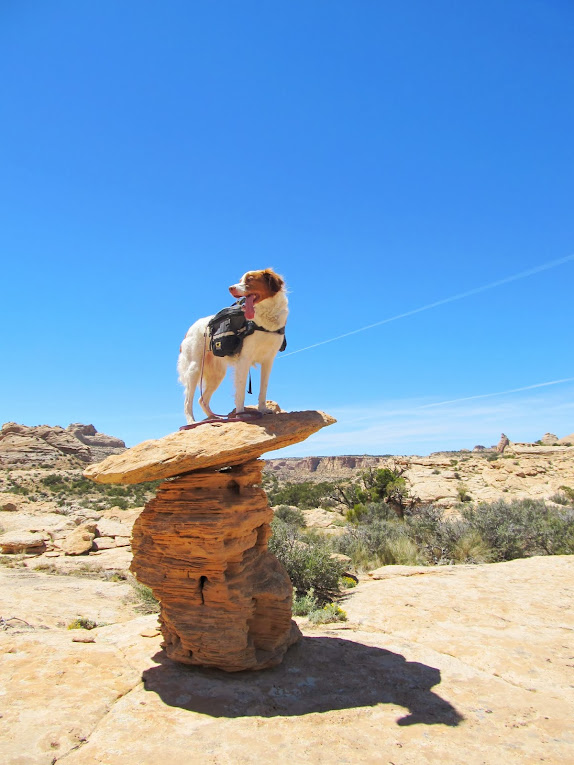 Finally a glimpse of the arch, even if it is from across the canyon and a third of a mile away 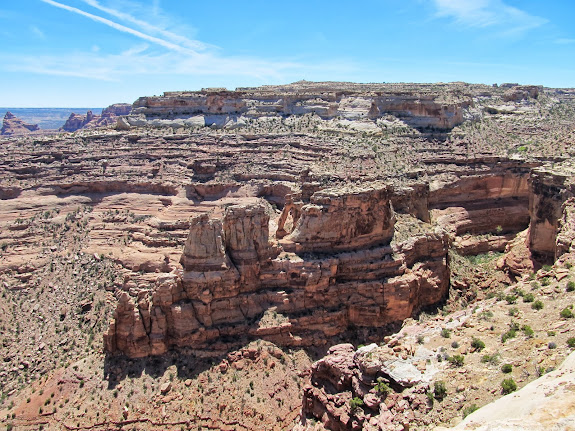 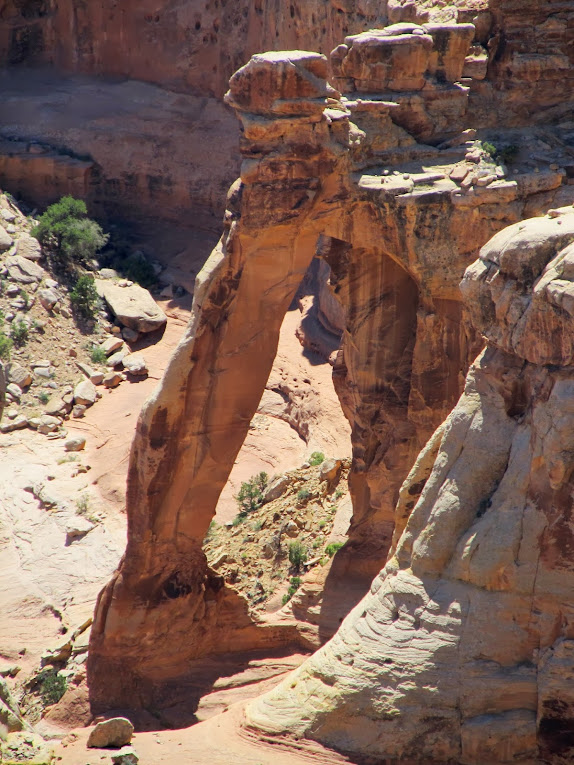 We left the arch viewpoint and wearily hiked back to our starting point. With all the routefinding it had taken us about seven hours and just over nine miles to reach the arch viewpoint, and there was still a lot of hiking before we’d get back to the Jeep at Box Flat. Shortly after starting to head back an airplane flew just a few hundred feet overhead. It was headed south, but once it cleared the cliffs it made a steep dive and bank toward the Mexican Mountain airstrip. I felt a tinge of envy as the plane quickly disappeared from view. The hike back was really rough on me. I had drank most of my water and Torrey had finished off all the water she was carrying. When we crossed the right fork of Spring Canyon again, I went a little out of the way down-canyon hoping to find some pothole water. I found some and let Torrey lie in it to cool off and drink her fill before pushing along further. Just before the steep climb out of the canyon and up onto the ridge with the old road/trail, my legs began to cramp up. I kept moving, very slowly at first, and the cramps seemed to subside. When we got to the steepest part of the climb, I asked myself, “Did we really come down this way?” It was steeper than I remembered. After reaching the top it was a much easier (and mostly downhill) walk. My legs cramped up couple more times but as long as I kept moving they didn’t fully seize up. We got back to the Jeep after hiking 15 miles over the course of 11.5 hours. It felt sooo good to relax and enjoy a cold drink after one of the most difficult hikes I’ve done.

This plane buzzed us a few hundred feet overhead 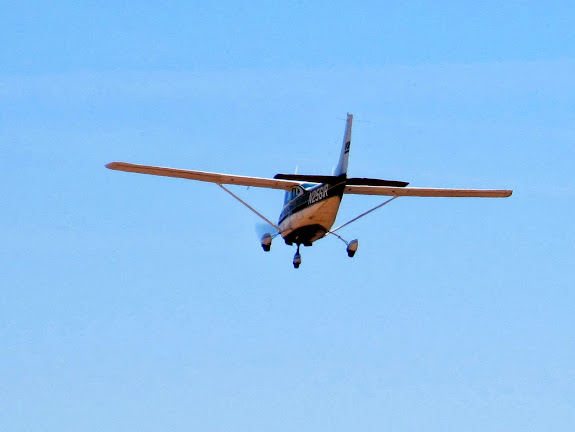 Torrey in some water in the right fork of Spring Canyon 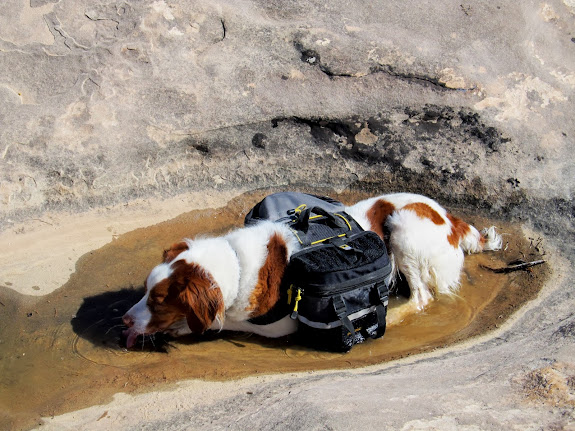 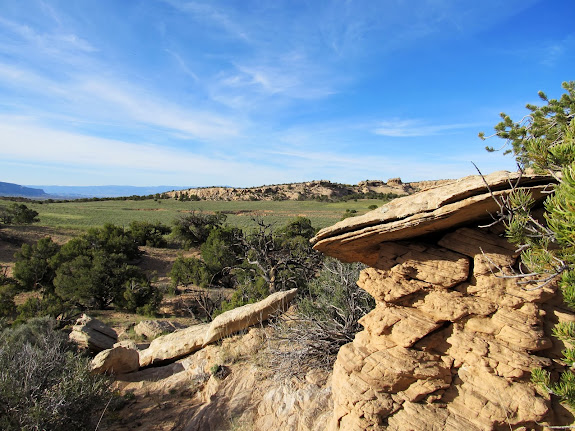 It was such a welcome relief to see the Jeep 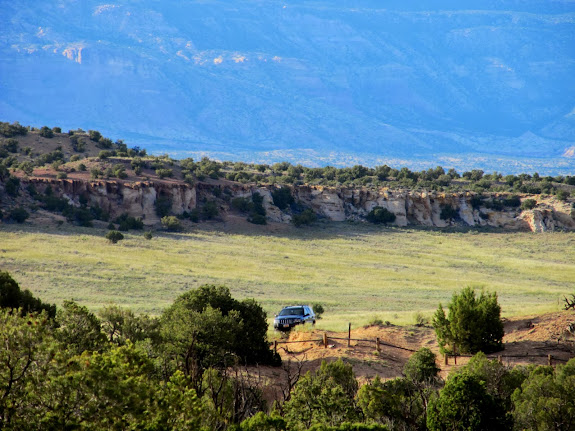 GPS stats for the hike 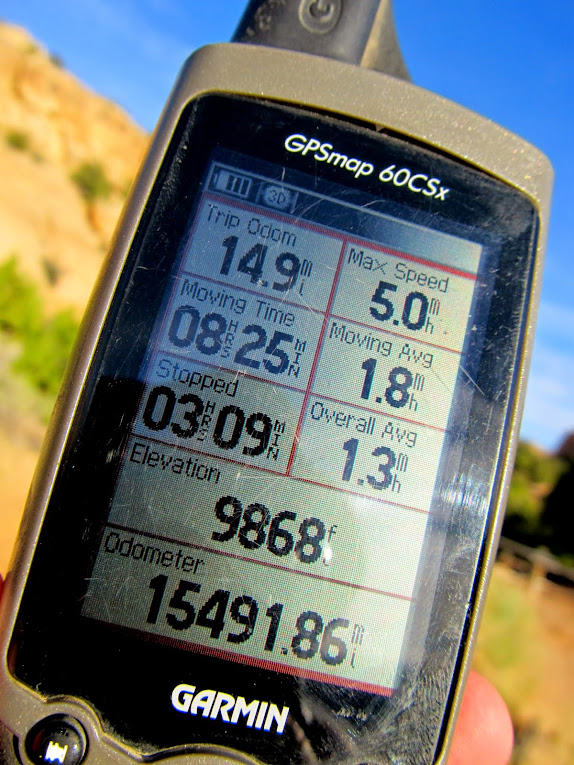