I’ve regretted not getting a desert backpacking trip in this year. My laziness is probably the only thing to blame–I do have worries about finding water in the desert, but I’ve seen so many recent trip reports from the Escalante area that I know my fears are unfounded. I’ve been keeping an eye out for condition reports from the Uintas in the hopes of doing an early-season backpacking trip there. Since Mirror Lake Highway (UT-150) opened just yesterday, nobody that I knew of had yet attempted a trip in the high country, so I decided to take the risk and go for it without knowing what I’d encounter. I threw my gear together, being more finicky this time about what I packed. That, combined with replacing my old synthetic sleeping bag with a Marmot Couloir 0-degree down bag, reduced my pack weight from just over 40 pounds to a hair under 30 pounds. What a huge difference that makes! When I got off work at 3PM yesterday, I loaded my pack and a few other things into the Jeep and hit the road about 30 minutes later. My initial plan was to park at the Bald Mountain trailhead and hike in to Clegg Lake or perhaps as far as Notch Lake if conditions permitted. After driving nearly three hours I arrived at Bald Mountain Pass and found way too much snow there for backpacking. I did attempt to walk on the several feet of snow covering the road to the trailhead, but even without a pack I sunk to my crotch.

The road to the Bald Mountain trailhead 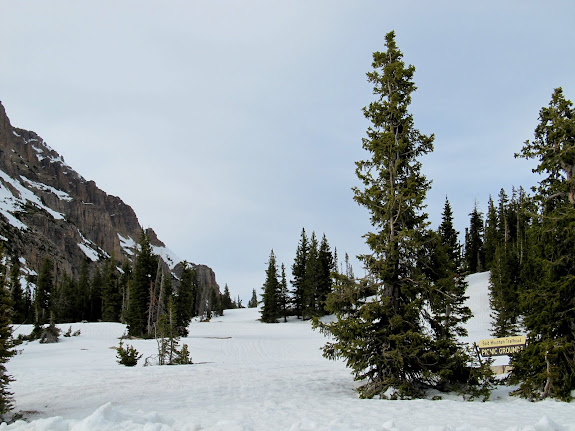 I used the map in my GPS to check the elevations of the two alternatives I’d planned, (1) Crystal Lake trailhead to Cliff Lake or Clyde Lake and (2) Ruth Lake, and the former was the lowest, starting at just over 10,000′. It’s about a 1.25-mile drive from the highway to the Crystal Lake trailhead, but I was only able to get about 0.15 miles before snow blocked the road. There were bare spots where the snow had melted and it seemed plausible that I might be able to hike at least to Crystal Lake, if not beyond to one of the higher lakes. I saddled Torrey up and shouldered my own pack and we started up the road. The section below the Trial Lake dam wasn’t too bad. I had to walk through a few soft snow drifts and sunk in up to my knees. Where the road curved south and climbed a hill things got worse. The snow was deeper and, where there wasn’t snow, there was a small stream of runoff. I tried walking in the shallow runoff and found that my waterproof shoes are no longer very waterproof. After struggling for 40 minutes and making it three-quarters of a mile, I reached the point where the road turned north and leveled out. I was hoping that here it would be easier-going, but that wasn’t the case. There was just as much snow covering the road and I still had half a mile to go before even reaching the trailhead where I’d planned on beginning my trip. 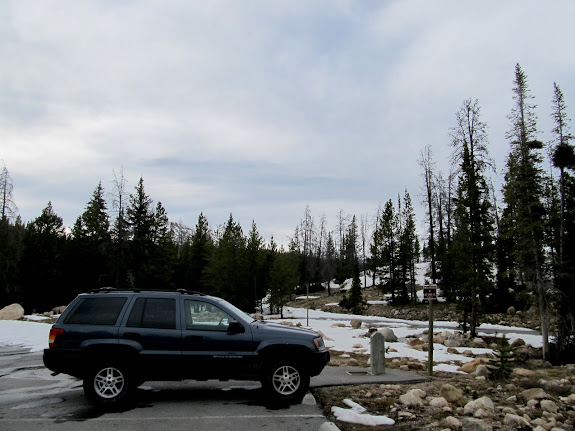 The road wasn’t too bad at first 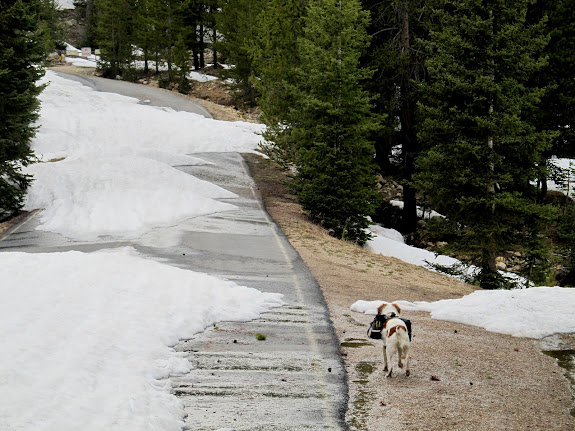 After a short distance the road became completely snow-covered 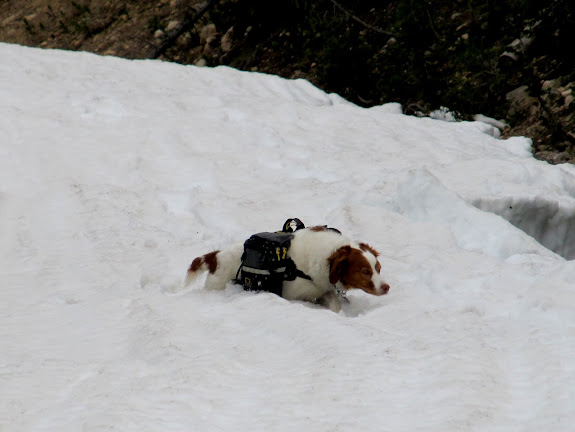 Snowmelt running down the road 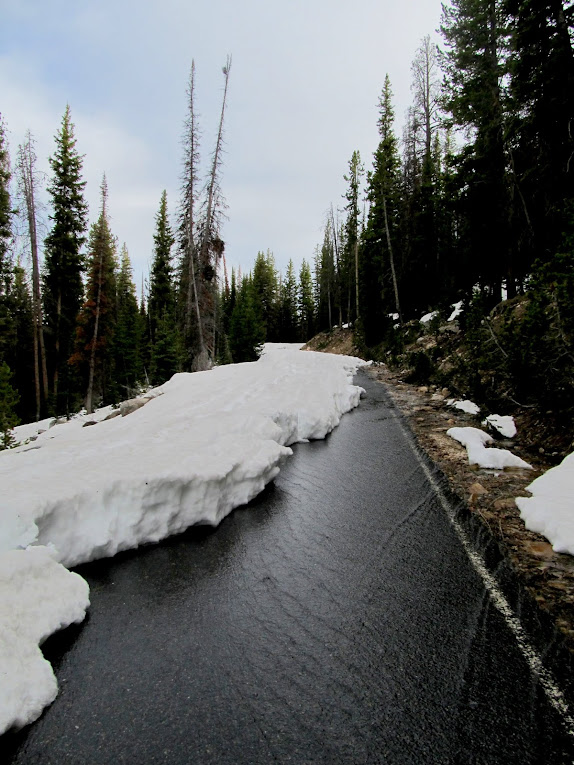 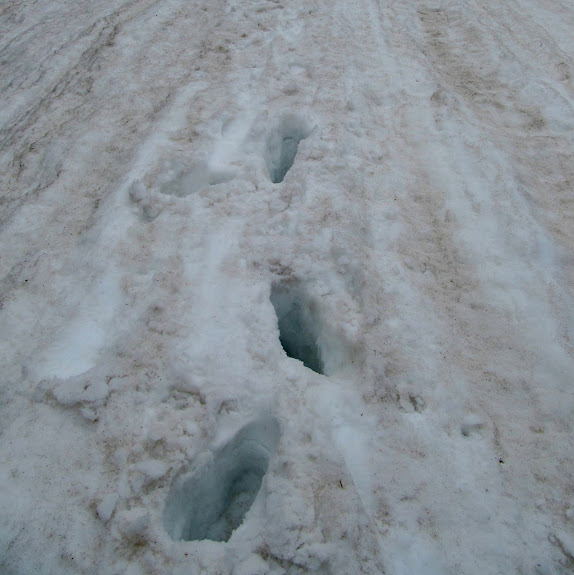 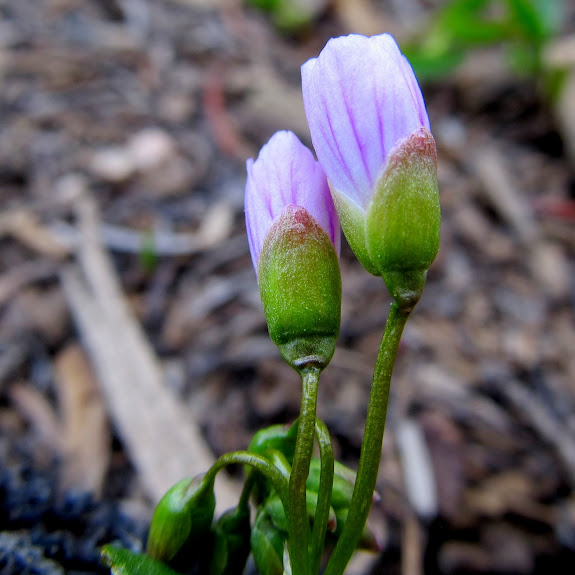 Here the road stopped climbing and turned north. I’d hoped there would be less snow, but it was just as bad so I turned around. 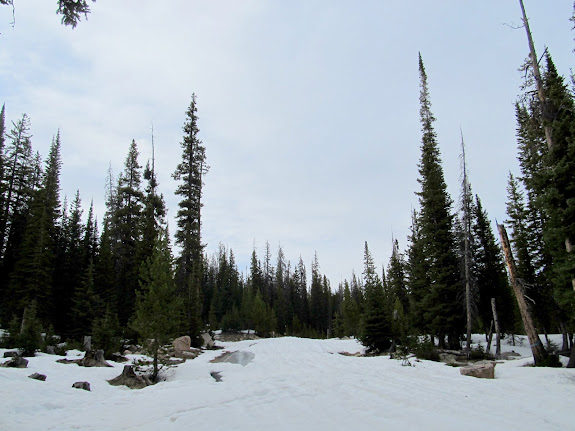 So, I gave up. I knew I’d have to struggle my way back to the Jeep, but since I wasn’t planning on camping and knowing I had a dry pair of shoes in the Jeep, I walked through the runoff much of the way. I detoured slightly to see Trial Lake on the way back. The view of Reid’s Peak and Bald Mountain from there was gorgeous with the sun low in the sky behind me. There were several people fishing from the dam and I got some odd looks from them as Torrey and I walked past with our packs on. I considered heating some water and rehydrating my dinner at the Jeep, but I really just wanted to get home quickly at that point. I grabbed some snacks from my pack and hit the road, stopping only briefly at Provo River Falls for a few snapshots. 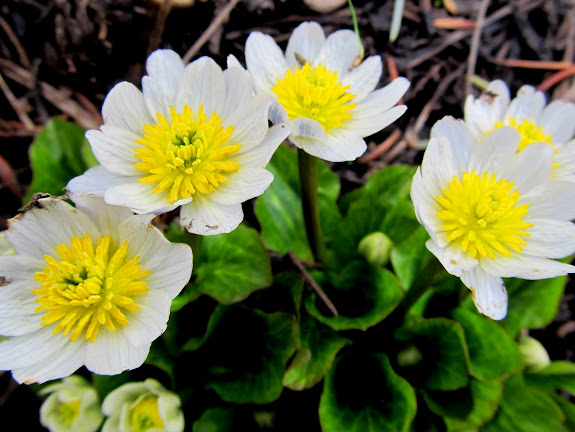 Snow and runoff on the road 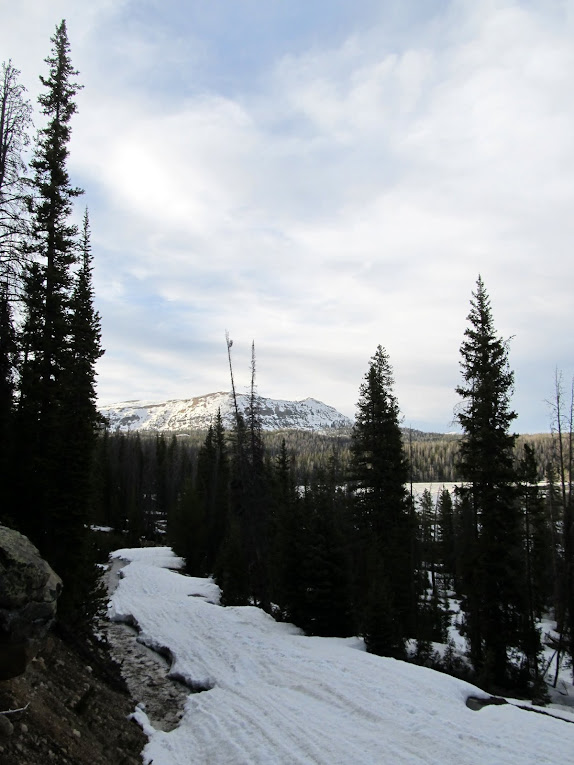 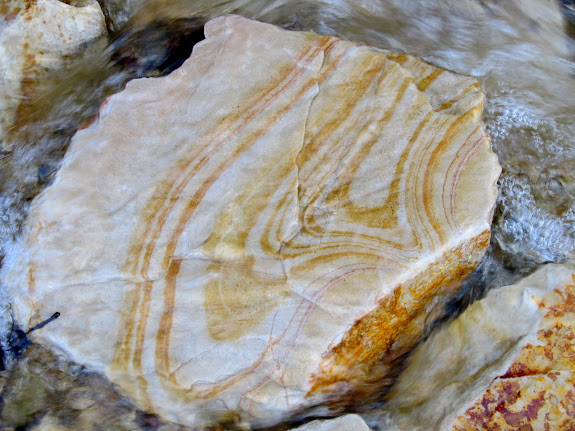 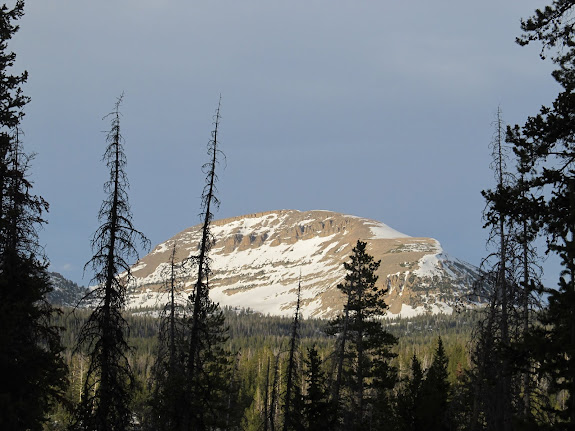 Walking through the runoff 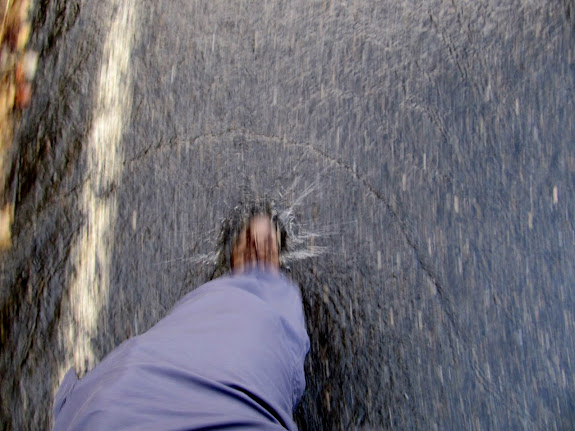 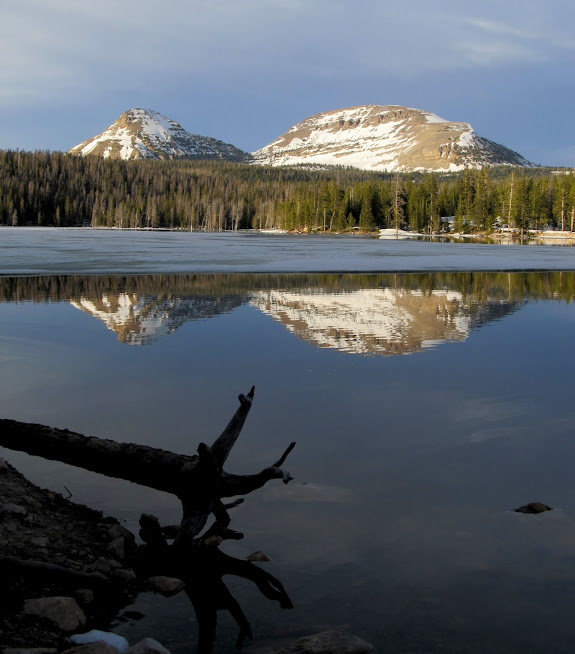 Pretty sky back at the parking lot 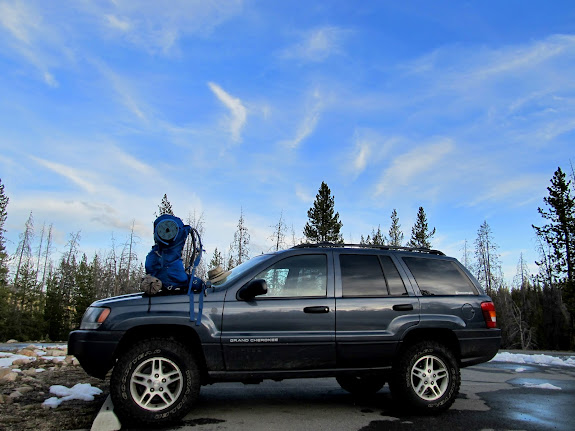 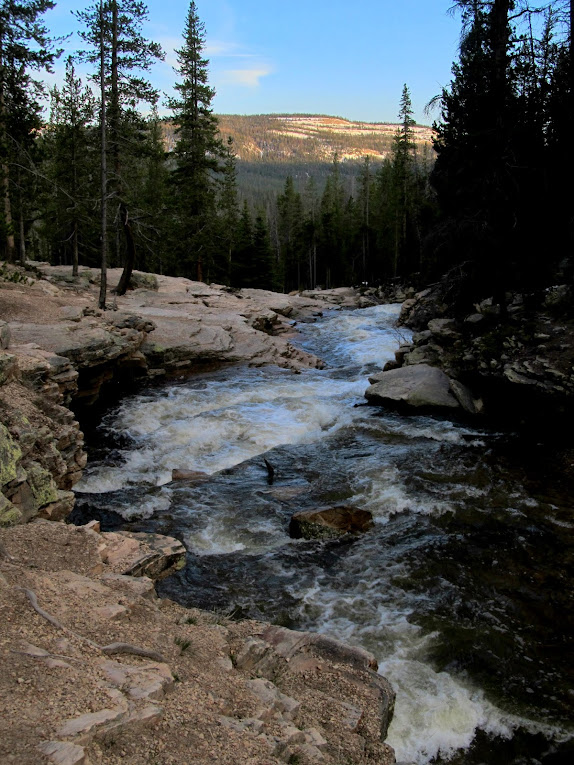 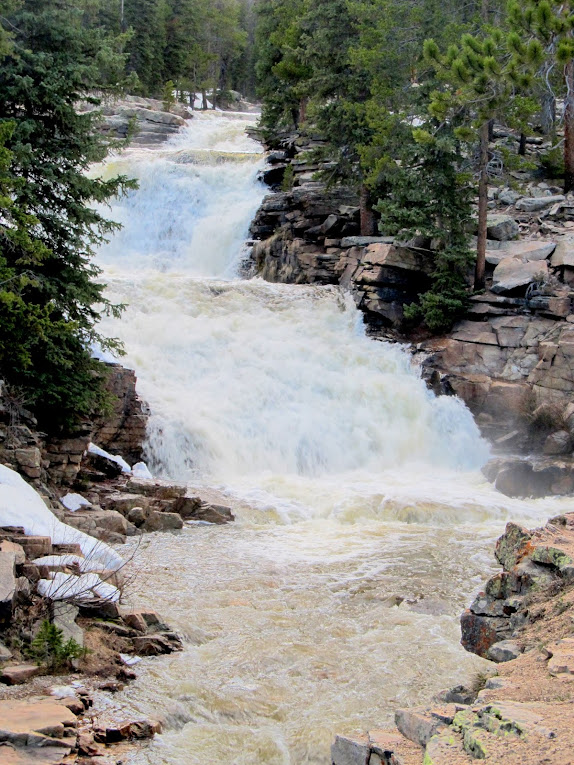 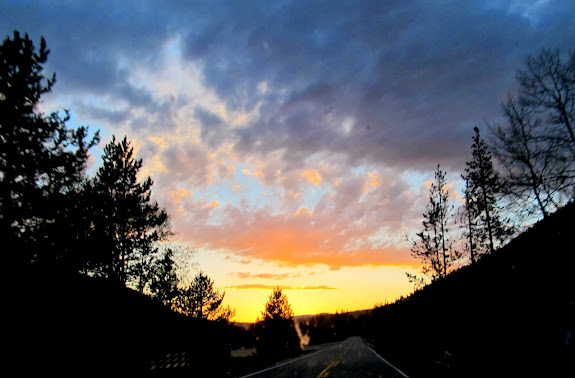