Another weekend, another winter’s day spent hiking. This Saturday Alan and I hiked in Old Woman Wash. He and I had each separately explored the area before (my trip was almost a year ago), but we’d seen different rock art panels on our trips. This time we visited all the known sites in the area, with the exception of one that I have yet to visit but was too far away for this trip. We hiked up Old Woman Wash and visited the Barnes Panel and High Alcove–it was Alan’s first time seeing the latter in person. Then, across the canyon from High Alcove we visited some faint pictographs. There were two large figures there, one fainter than the other, and possibly a third covered in mud that had run down the cliff. I saw the brightest of these figures from a distance during my last visit but hadn’t climbed up to see them until now. 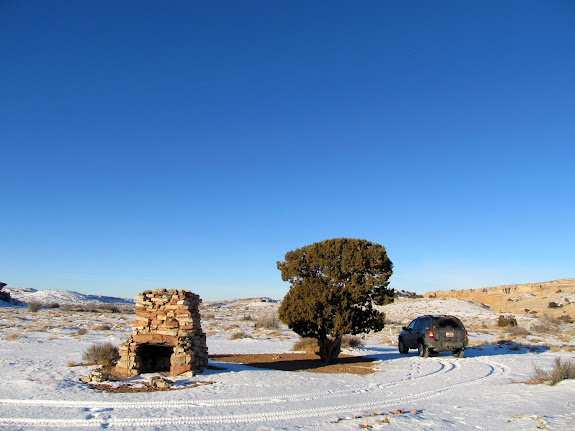 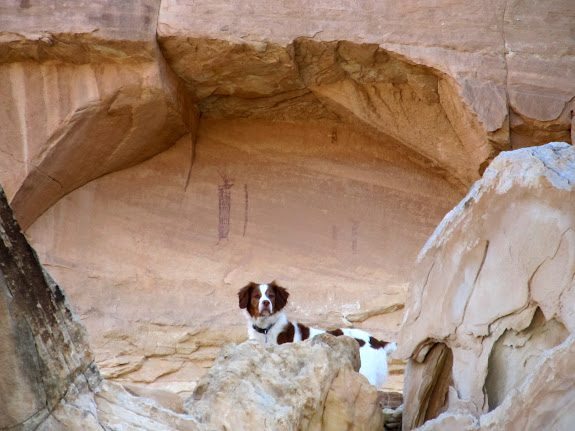 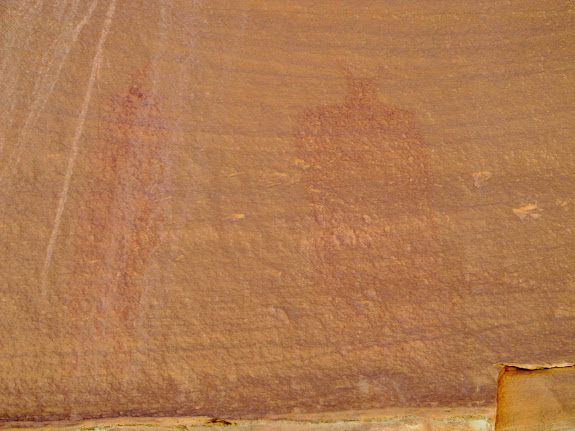 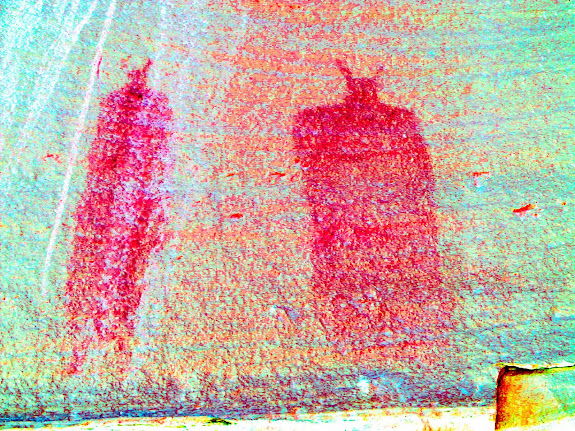 Next we visited the Ekker Panel and a couple of others that Alan knew about (one of which he’d discovered on his own earlier). At the Ekker Panel I saw one interesting rainbow(?) petroglyph that I’d missed last time. Instead of being on the cliff with the other rock art, it was on a boulder that had fallen off the cliff long ago. The other sites Alan brought me to were an interesting mix of pictographs and petroglyphs. Previously I’d been amazed at the concentration of rock art in this area, but after this trip I was, well, really amazed. 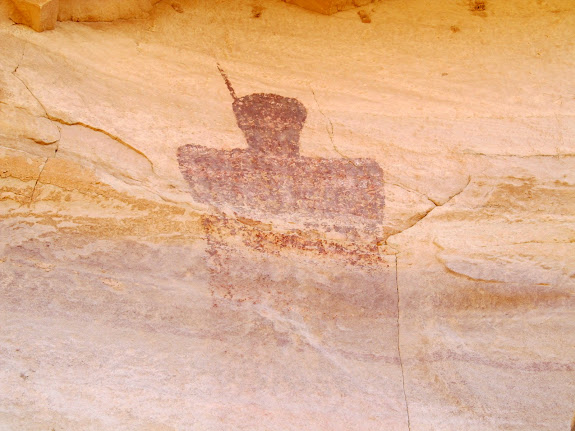 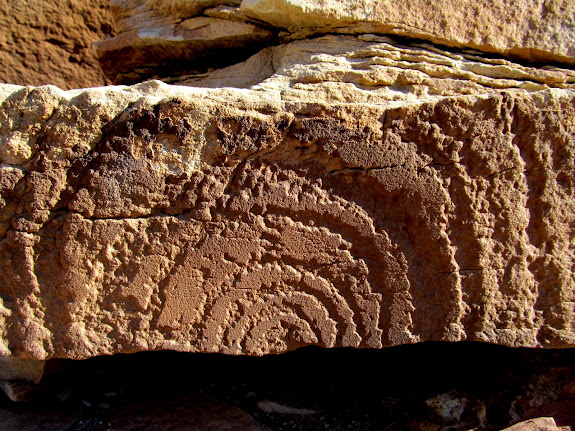 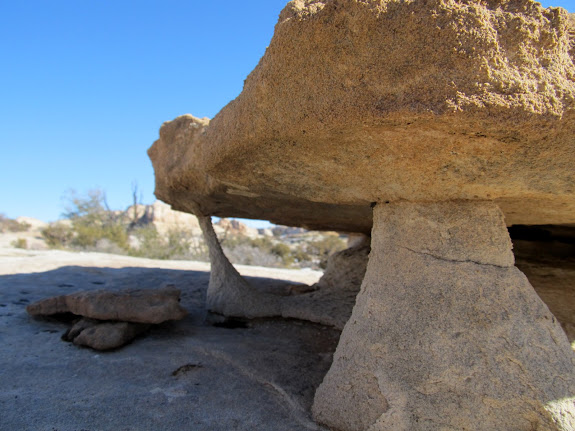 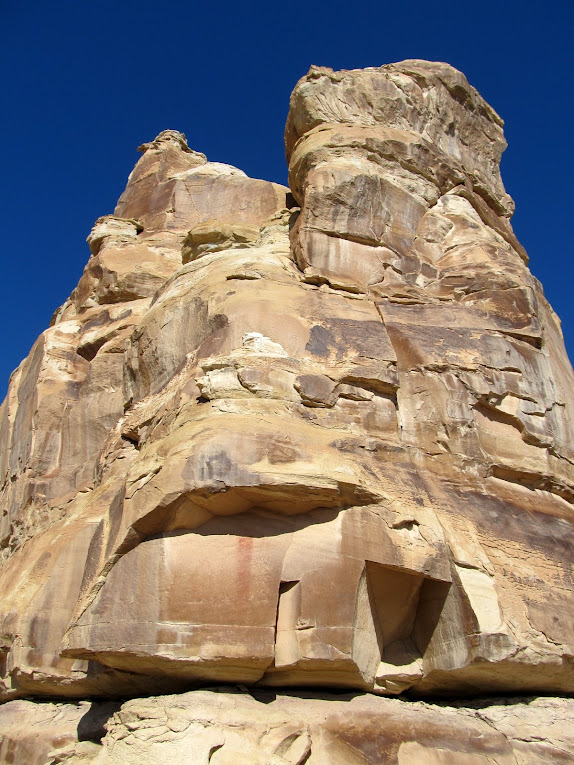 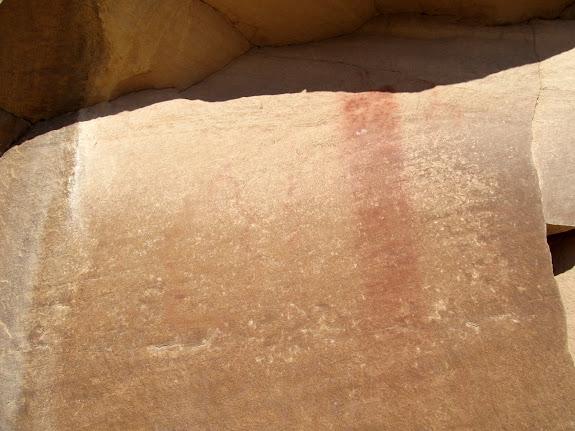 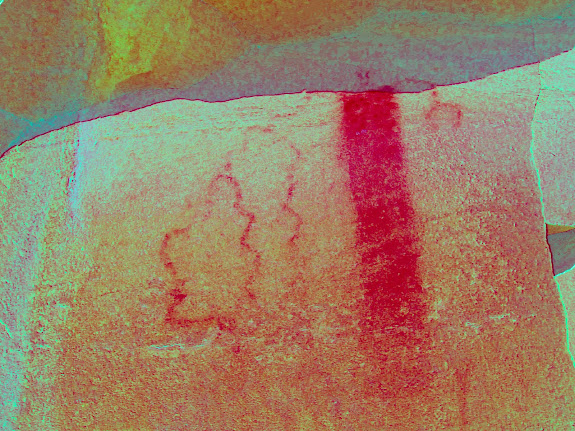 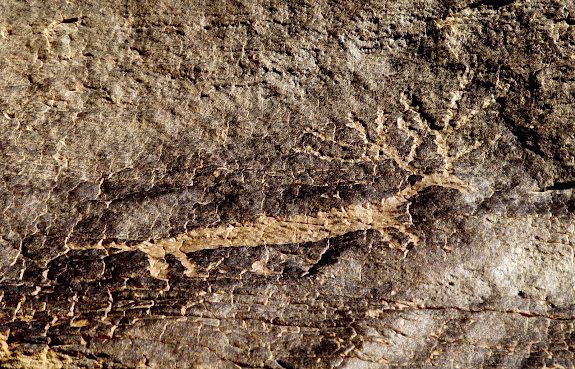 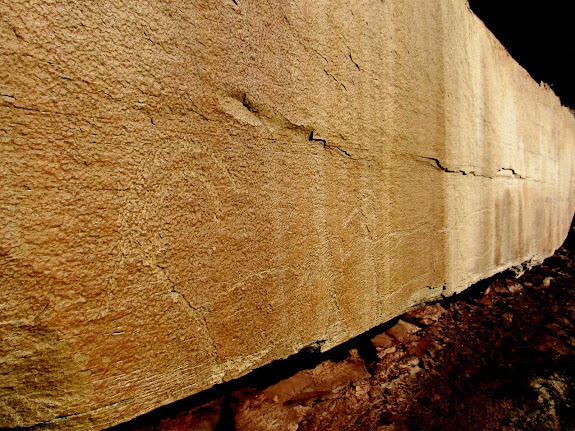 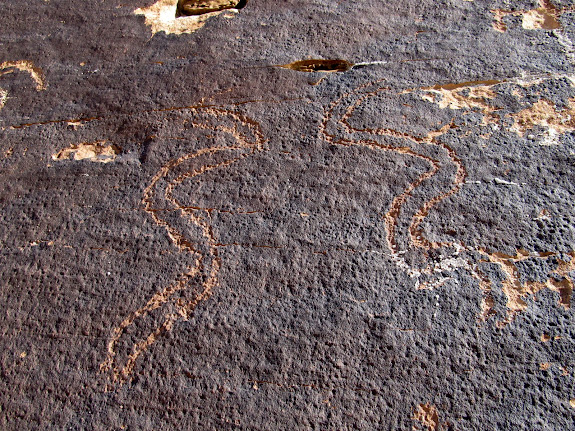 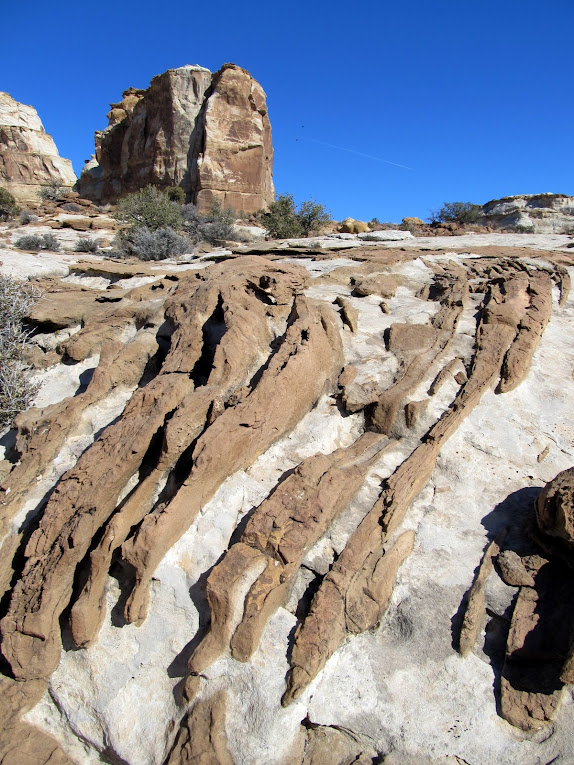 Alan and I made our way back down the San Rafael Reef and found some historic writings. There were some initials with 1901 dates carved into a cliff, probably left by cowboys or prospectors. We explored a small side canyon in which we had to stack some rocks to get up onto a ledge, but I was disappointed that a short, impassible cliff prevented me from reaching the top of the ridge and looking down into the next drainage over. We continued descending the Reef and made it back to the Jeep by early afternoon, where we had a quick bite to eat before moving on to our next destination. 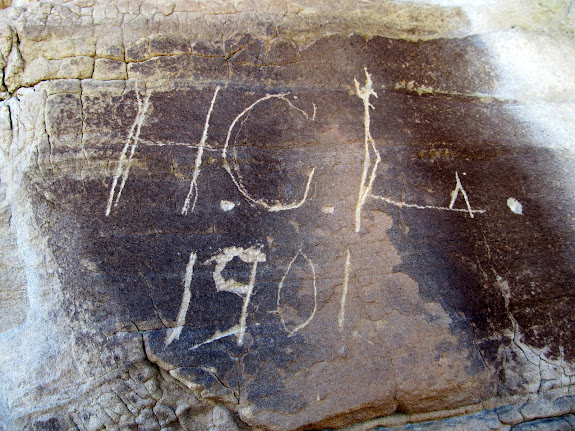 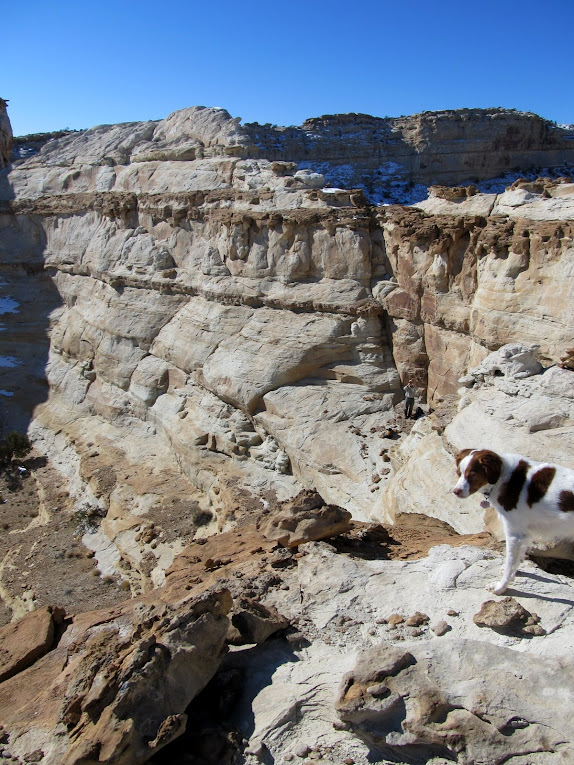 We drove to the other side of Highway 24 to search for a Butch Cassidy inscription that we’d heard about third-hand. I wasn’t optimistic about finding it but I also thought it was worth trying since we were so close. Based on the description we had, we stopped near the corral in Cottonwood Wash (which is formed where Old Woman Wash joins up with Temple Wash). Our search for the inscription came up empty, but we found something else interesting. I spotted what looked like a dead calf lying on the ground, but as I approached it, it raised its head. It was dying rather than dead. The calf’s tail was missing and there was a gaping 6″ hole there on its back where I could see its spine. Alan and I didn’t have to discuss it for very long before deciding to put it out of its misery. It appeared that the poor thing had been attacked by coyotes, and we believe we interrupted the attack–otherwise why would the coyotes have left? Dispatching it seemed the right thing to do ’cause they surely would have returned to finish the job after we left. We finished the day by making a quick visit to the nearby Cottonwood Wash petroglyph panel. I’d never been there, but I’ve been within a few hundred feet a couple of times. The site was very busy, but most of the petroglyphs had been repatinaed and most of them were difficult to make out. What I could see, however was great. Alan had to be back in town at a certain time, so we left before I could find more than one arrowhead. 😀 There were a lot of chippings covering the ground along the cliff below the rock art, and searching for only a few minutes yielded one small broken point for me. 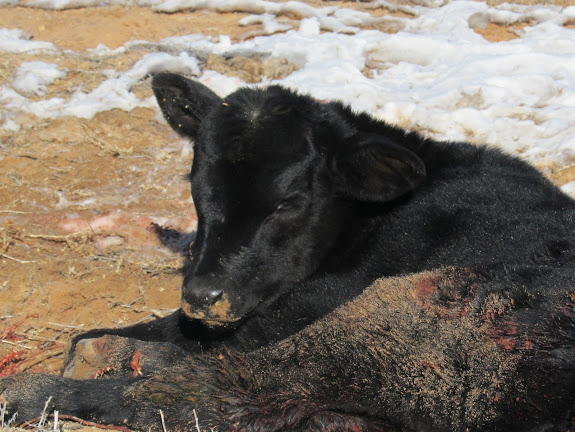 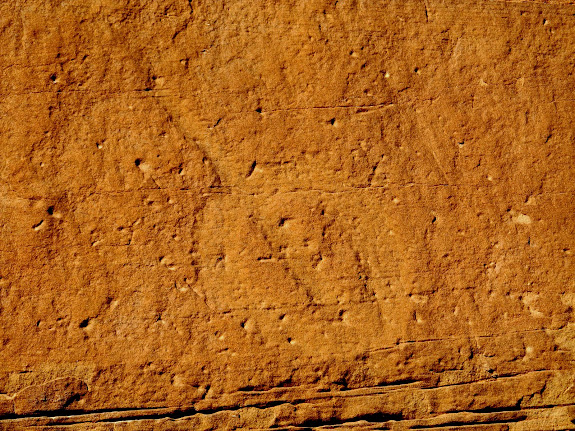 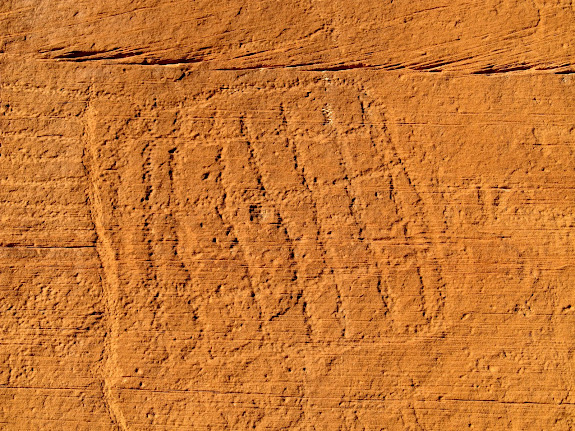 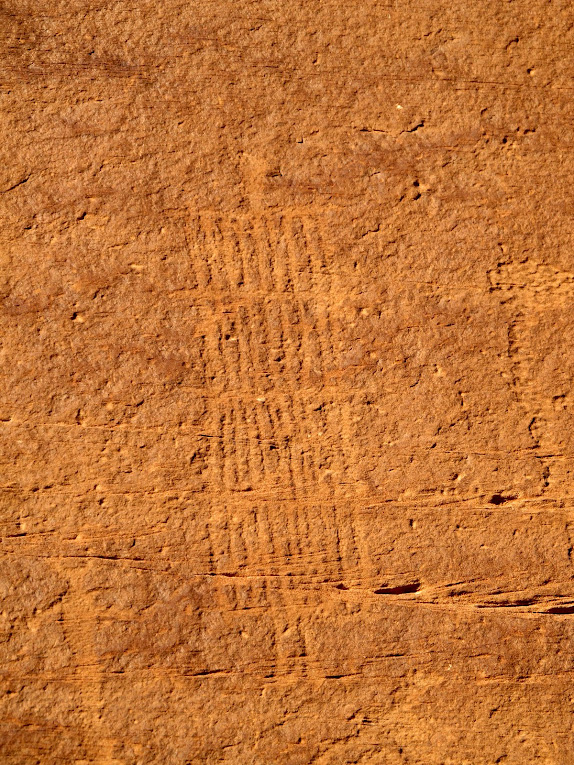 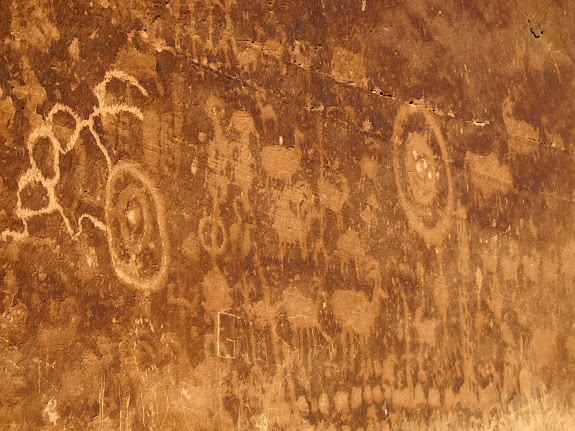 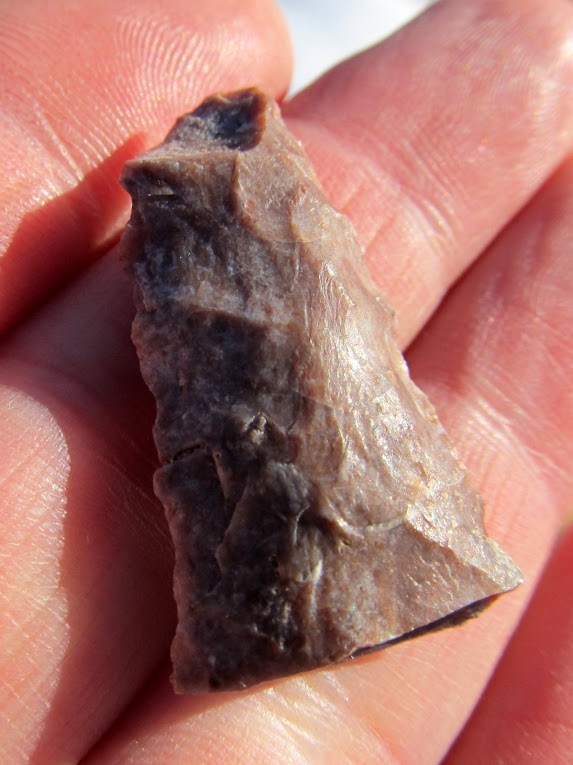