When given the opportunity to hike with Wade and Alan this weekend to search for an alcove with a Bill Tibbetts inscription inside, I jumped at the chance. Last year I’d read Last of the Robbers Roost Outlaws by Tom McCourt, which details Tibbetts’ arrest on supposedly false cattle rustling charges, and his subsequent jail escape and hiding out in the San Rafael Desert (which is actually well outside of the Robber’s Roost). Wade had called Ray Tibbetts, Bill’s son, and asked where the inscription was. Based on the directions he received we were going to search on the north side of Keg Spring Canyon. I drove the Jeep from Price with Alan, and we met Wade and his son, Weston, in Green River. It was -18° F in Green River when Wade and Weston hopped in the Jeep, and it got down to -24° on the drive south. During the drive, shortly before reaching the San Rafael River bridge, we saw a shaggy white dog on the road. He ran ahead of the Jeep on the road for a while, and even after he veered off the road and I stopped the Jeep, he wouldn’t approach. I continued driving. It was 7° when we reached the spot where Wade wanted to search. We all got out of the vehicle and started hiking, looking for any cliffs that could hold the alcove containing the inscription. 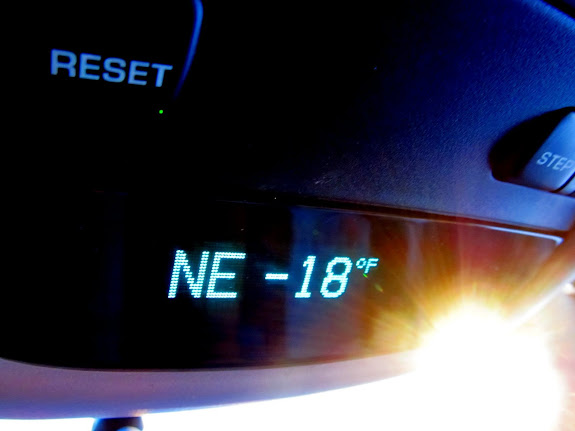 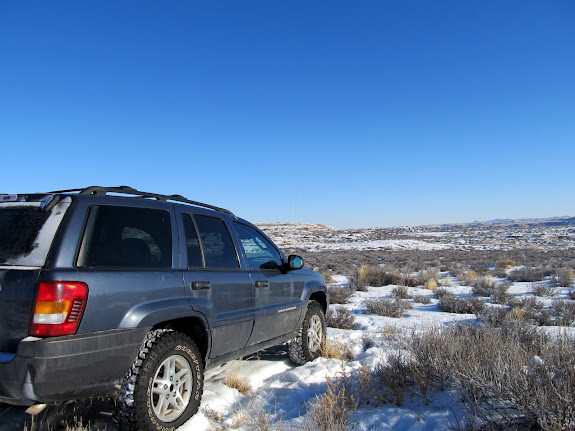 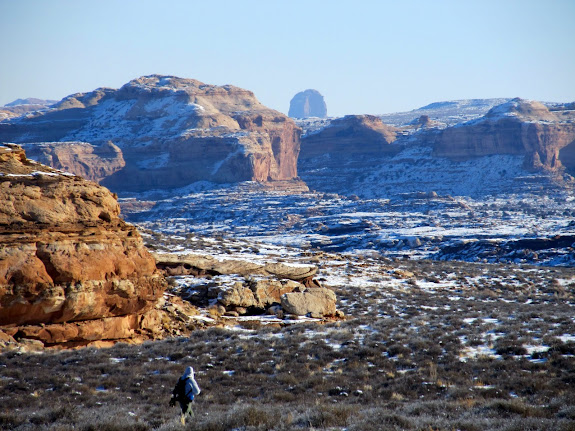 We stuck together for a short while, then split up to cover more ground. I checked out a couple of smaller sandstone knolls to the south while the other guys looked along a long line of cliffs. Alan found a broken awl point along the cliff line, but that was about the only sign of prehistoric habitation anyone found. There were a few relatively new historic names scratched into the cliffs by cattlemen, but not the Tibbetts inscription we were hoping to locate. We converged back at the Jeep and drove to the rim of Keg Spring Canyon just to have a look, then drove around to the head of the canyon. 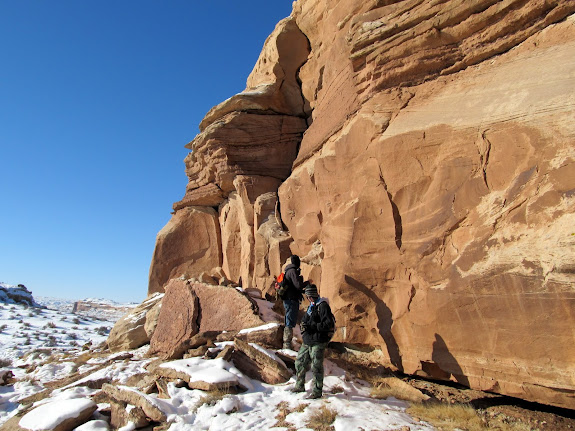 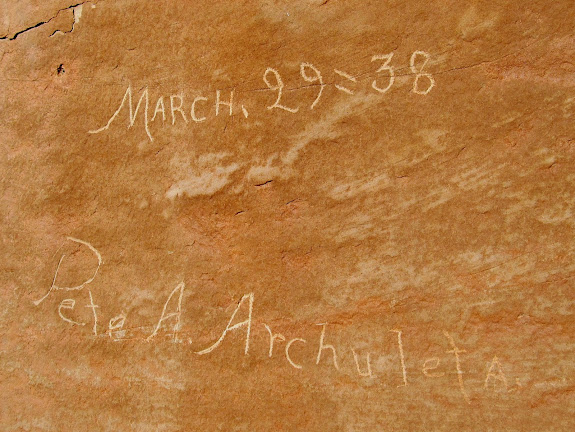 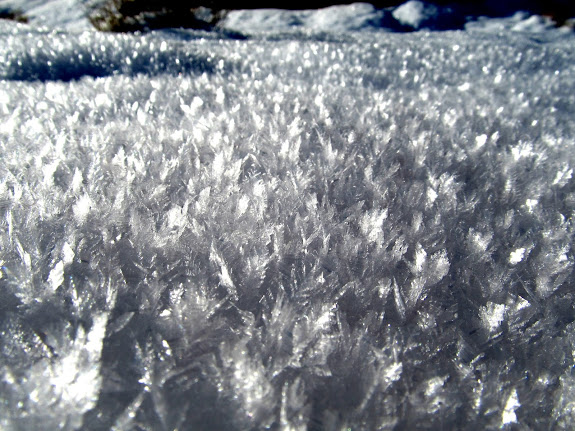 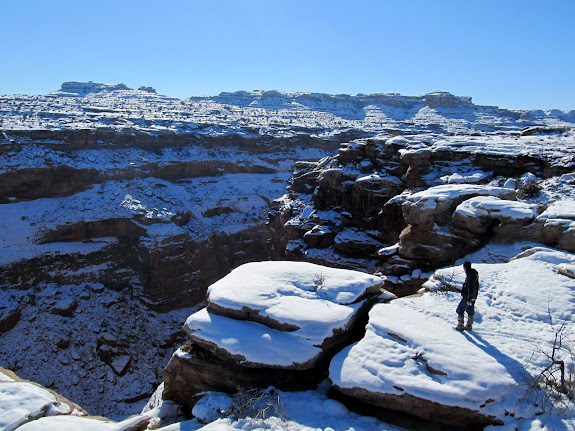 Our next stop was at one of the smaller forks of Keg Spring Canyon. Alan had been there before and showed us some interesting things. There were names carved in the cliffs by Joe Swasey, Harold McDonald, and Mont Caldwell (all relatives) from 1905. There was even a Tibbetts brand scratched into the sandstone in 1932, but that was well after the time when Bill was hiding out in the area in 1924. The most interesting things there were some petroglyphs, moki steps, and obsidian flakes. The petroglyphs weren’t great overall, but one in particular was well-made. The moki steps may well be modern–the cliff they’re carved in can easily be bypassed by walking a short distance to either side–but I’m still not sure why anyone would bother carving them. The obsidian flakes were of the greatest interest to me. Obsidian doesn’t occur naturally anywhere in the area, so it must have been carried quite a distance (at least 150 miles). There were a lot of chert flakes on the ground, and a handful of obsidian flakes, so this was likely an Indian habitation site. 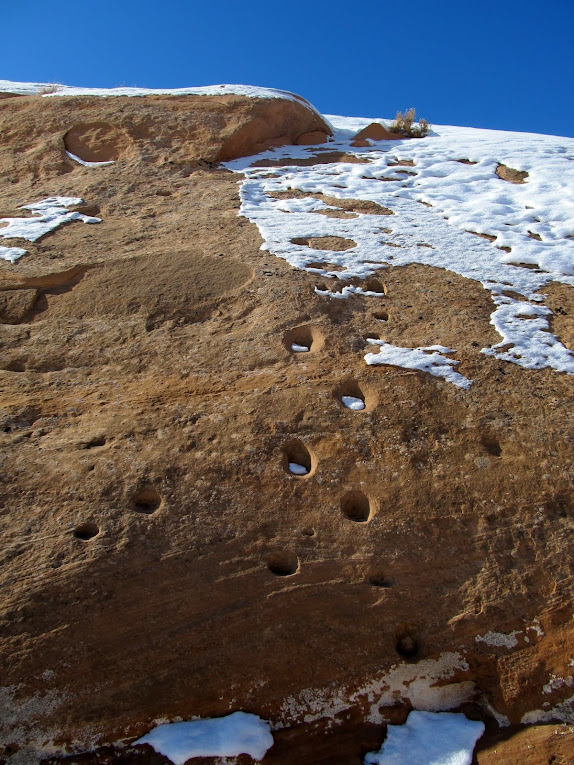 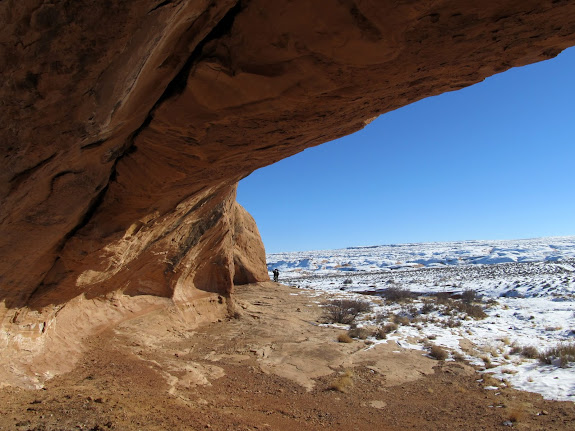 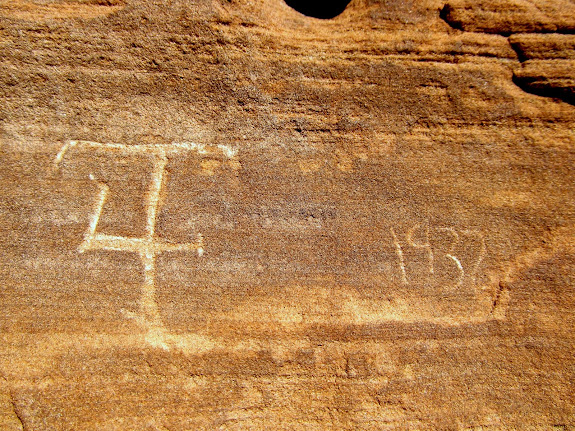 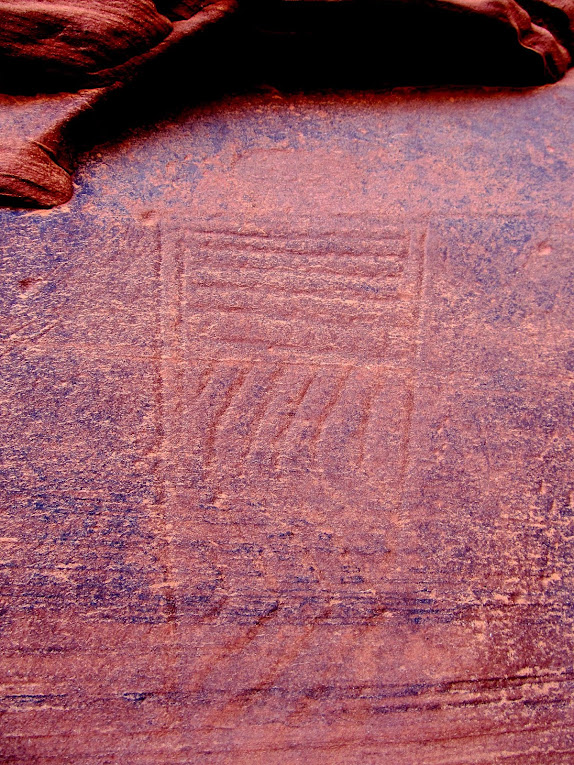 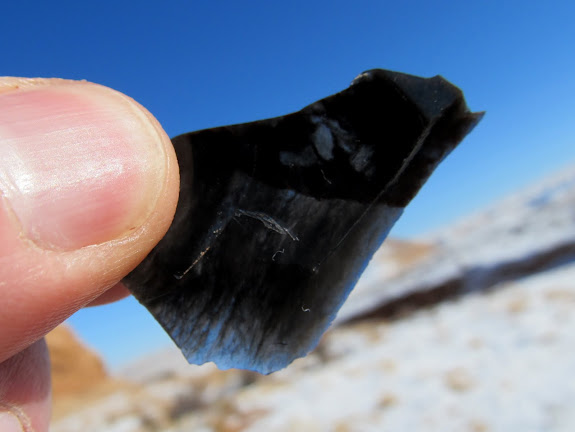 We continued down the road and arrived near the rim of Keg Spring Canyon. Here, we were going to try finding a route into the bottom of the canyon. Based on a map Scott P. had posted in response to my Keg Point trip report from two years ago, we were hoping to find a trail into Keg Spring Canyon, though none of us were entirely confident we’d find it. On the way to the canyon rim we spotted an old stove and various discarded cans and other junk scattered on the ground–a promising sign that we’d find the livestock trail nearby. We arrived at the canyon rim and found the trail exactly where Scott’s map showed it would be. We made the easy descent into the canyon, then began the difficult bushwhack down the canyon toward a cave marked on the USGS topo map. Alan led the way, breaking through tamarisk, routefinding through snow-covered boulder fields, and breaking through thin ice near the many springs. It was only about a mile to the cave but I was sweating and breathing heavily when we got there. We searched the cave for old cowboy inscriptions but didn’t find anything too interesting, then took a lunch break. 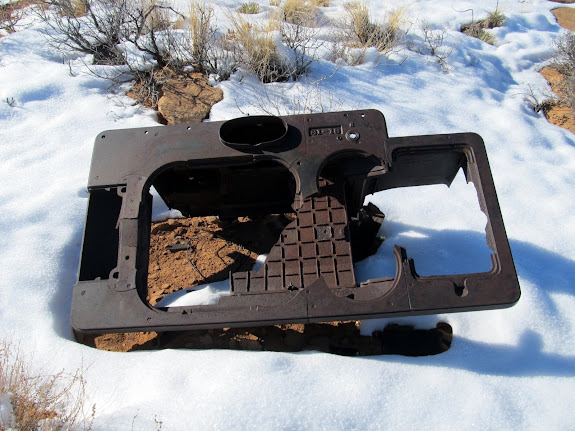 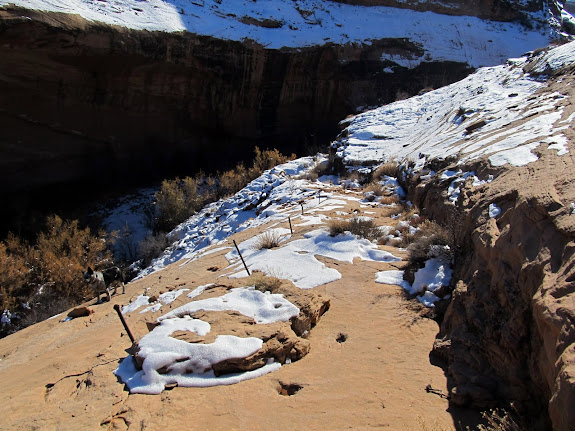 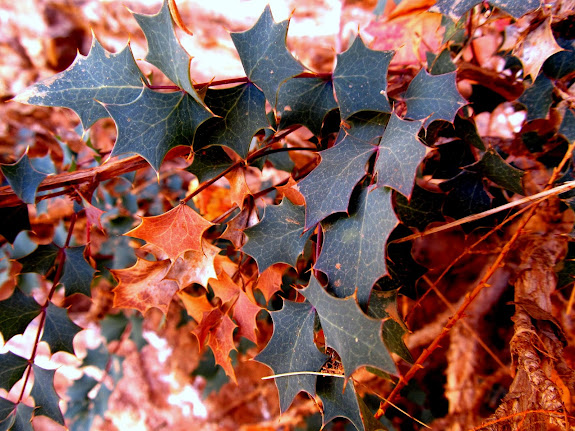 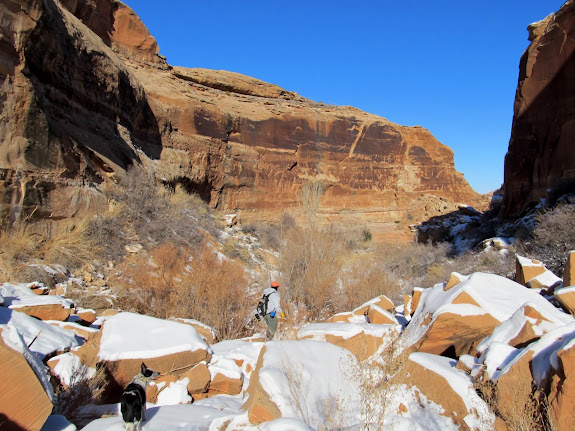 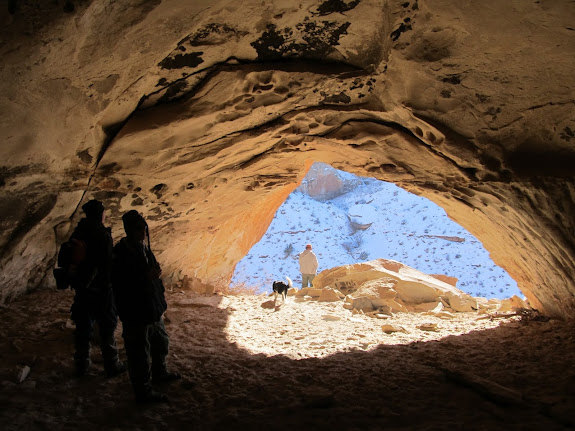 We returned up the canyon but, upon reaching the base of the livestock trail, determined that we had enough daylight left to visit Keg Spring just up the canyon. After some initial bushwhacking, travel became easier and the only hazard was the smooth sheet of ice covering the canyon floor. We passed several small springs that created icicles on the canyon walls, but at the head of the canyon there was an immense amount of ice covering the walls and floor. We admired the ice for a short while, then returned and ascended the trail to the waiting Jeep. While driving back to Green River we encountered the same dog on the same stretch of road we’d seen him on in the morning. This time, however, instead of running away he just stood in the road. I stopped the Jeep near him and he walked up to Alan’s open door and sat down. I think it was clear that the dog didn’t want to spend another night in the snow and sub-zero temperatures. We decided to take him to Green River with us, and Alan loaded him into the back of the Jeep. The dog seemed grateful to be there and was content to curl up in the relative warmth of the vehicle. Alan called the Emery County Sheriff when we regained cell service and arranged for the acting animal control officer (who is actually a UHP trooper) to meet us in town. He took the dog and said he’d be transferred to the animal shelter in Castle Dale by the middle of the week if nobody claimed him by then. I dropped Wade and Weston off at their vehicle and Alan and I headed home to Price. 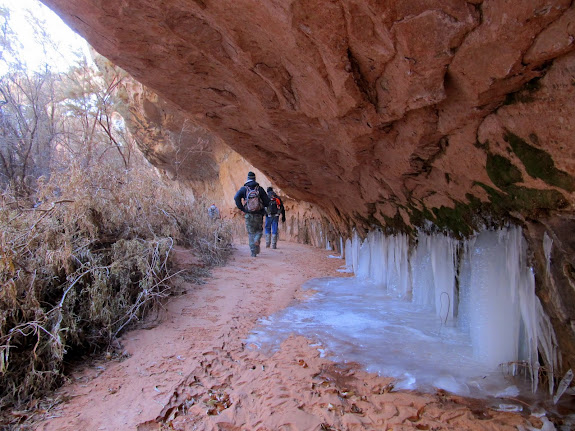 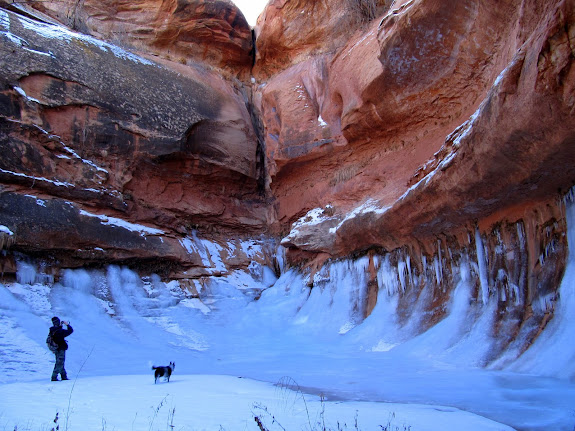 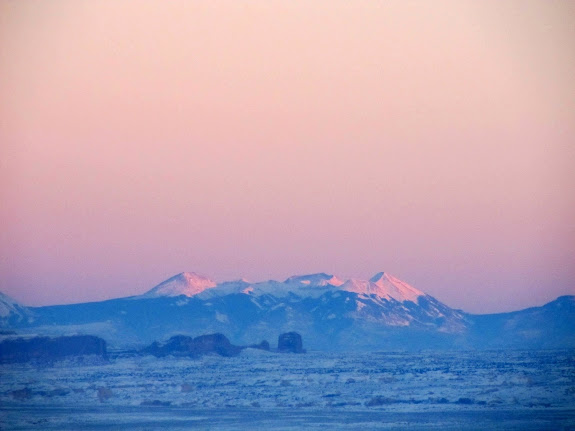 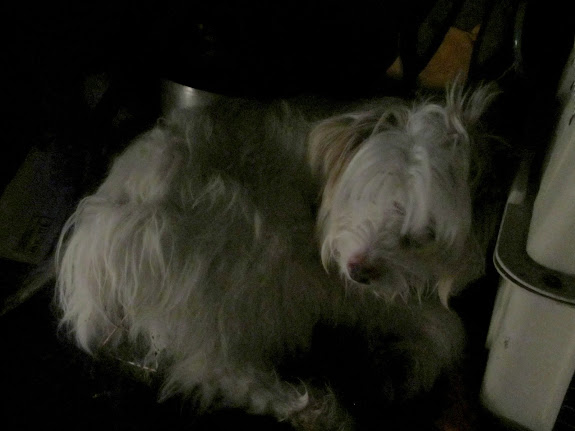 Although I had spent some time before this trip trying to discern the location of the Bill Tibbetts inscription, I came up empty. I was certain from McCourt’s book that the alcove was on the rim of Horseshoe Canyon, but beyond that I had no clue as to the location. After this trip, I spent some time Sunday trying again to glean the location. I managed to use the second and third photos on this page and matched them up with some Google Earth imagery to positively identify the location, and Alan and I are going back on Saturday to visit it.