On my first full day at the Fall 2012 San Rafael geocaching event, Torrey and I hiked up the San Rafael Reef trying to find a route into Spring Canyon above the dryfall. One can easily hike up the bottom of the canyon half a mile before reaching a dryfall with a pool of water at the bottom of it, but ascending beyond that is impossible without leaving the canyon and finding another way into it from the rim somewhere above the dryfall. I’d already been up the southern rim of the canyon a few times in the past but I never saw a viable route. My most recent hike in the area was in April when I hiked up the southern canyon rim with Listorama. We did make it into upper Spring Canyon on that trip but it was well above the dryfall, and from what little I could see down the canyon from where we crossed it, it would be one hell of a bouldery scramble to get down to the dryfall. For this trip up the northern rim I got an early start just after sunrise. It was a relatively easy hike up the canyon rim and I soon found myself looking down on the dryfall from above. From there, looking west along the canyon rim I thought I could see a break in the cliffs that would allow me to descend into the bottom of the canyon. I worked my way west and tried to get into the canyon but I found myself at the top of a cliff that didn’t actually allow access to the floor. 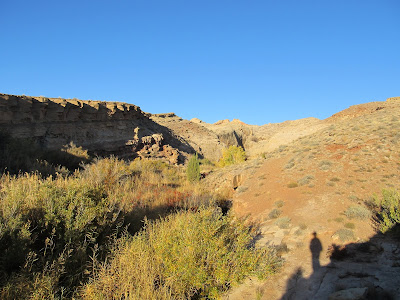 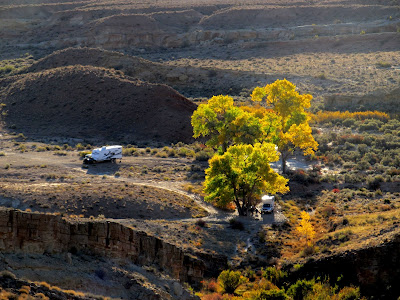 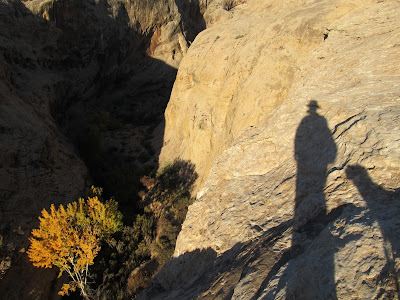 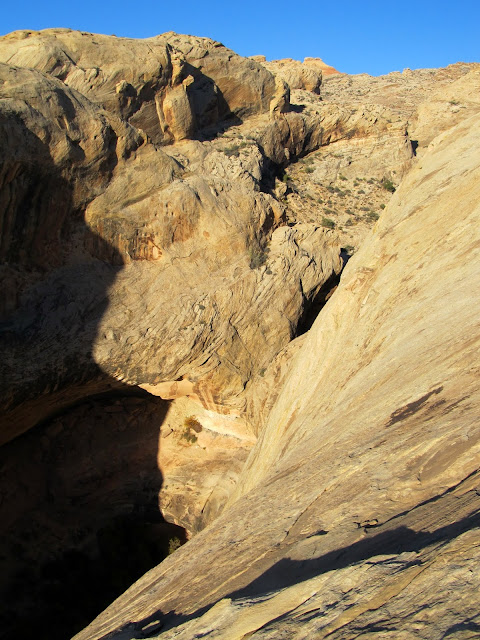 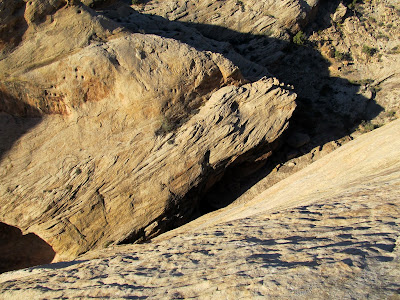 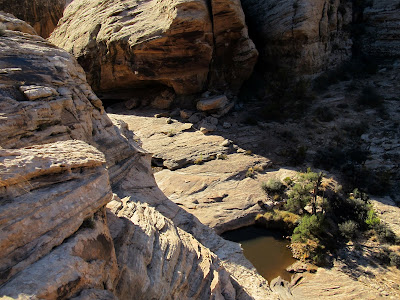 I continued west along the rim. The cliffs grew in height and I kept getting higher above the canyon and farther from my goal. I got to a spot where I could see route where Listorama and I had crossed the canyon earlier in the year, and from there I was certain there was no other way down except the way I’d done it back then. I almost gave up at that point. I could see the steep bouldery section I’d have to descend if I wanted to eventually stand on top of the dryfall, and I simply didn’t want to do it, especially alone. I decided to at least go to the top of the bouldery scramble and give it a closer look. I had to drop into the next canyon to the north, then travel west and then southeast to get around a band of cliffs that barred access to the canyon. A ramp led into upper Spring Canyon at the base of the cliff band, and I worked my way down it while threading through the huge boulders that had fallen off the cliffs above. Finally in Spring Canyon, I began descending. It was easy-going at first, with a smooth sandstone floor that held a few potholes of water. 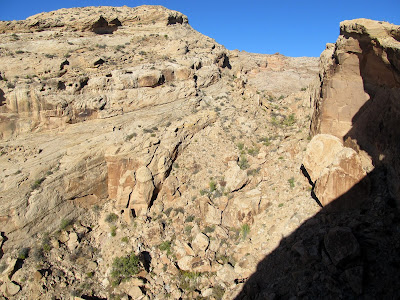 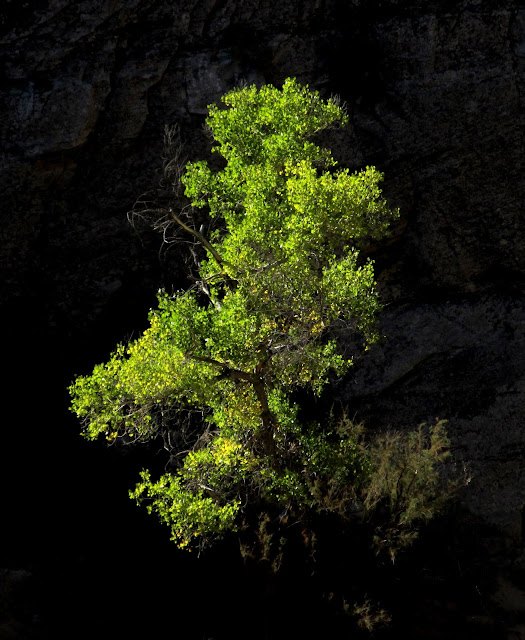 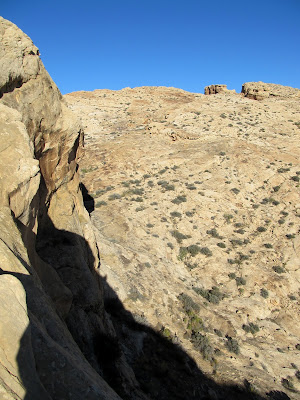 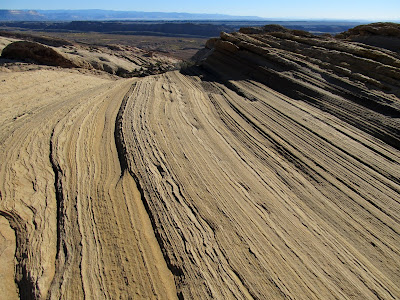 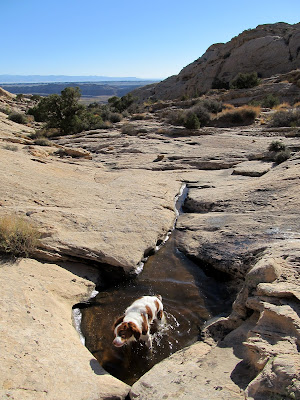 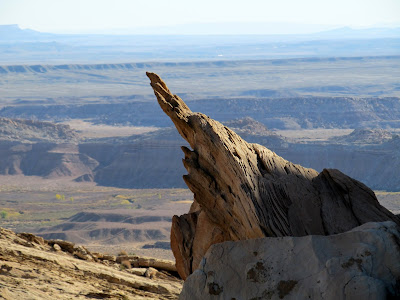 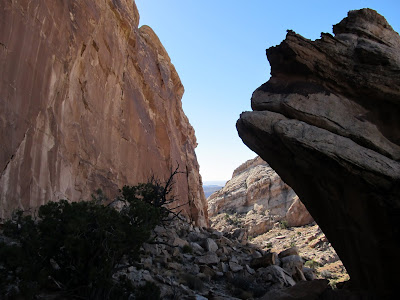 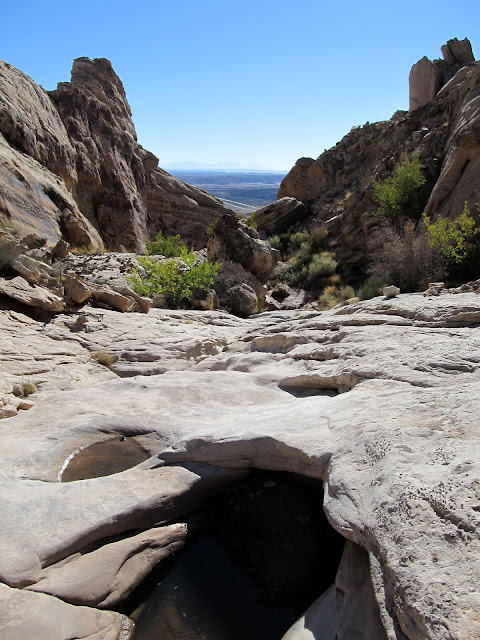 After only a few minutes of easy hiking I ran into the top of the boulder section. It looked just as rough from here as it had from the canyon rim above, but it didn’t look nearly as long. I felt committed to descending the canyon then, knowing full well that I would probably have to re-ascend the boulders to get back out of the canyon. It took about 30 minutes to get through the boulders to a point where the canyon floor leveled out. There were some steep and loose sections but I didn’t have much difficulty negotiating them. I did my usual checking of the canyon walls for rock art and came up empty, but I found an oddly-stacked pile of wood that somebody left there–for what purpose I couldn’t imagine. 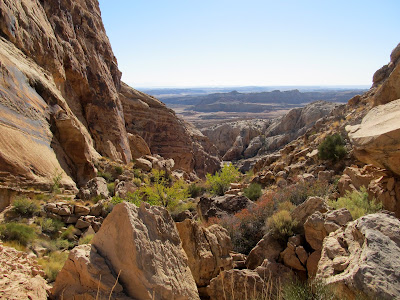 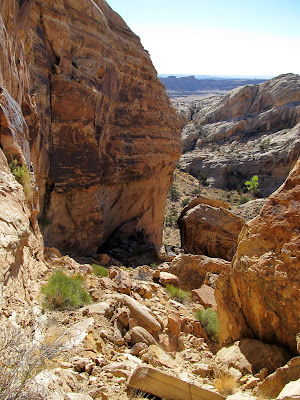 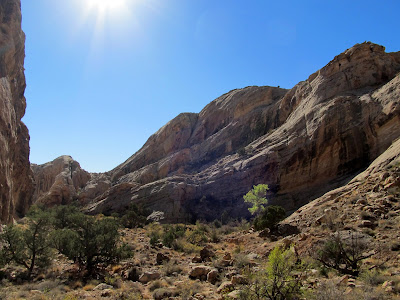 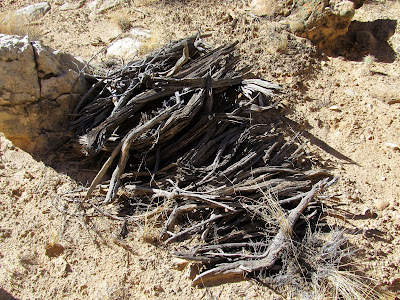 There were a few pools of water before the canyon narrowed up into a small slot just before the dryfall. One pool was long and narrow and deep, and Torrey set out ahead of me and started swimming to the far end. She had a tough time trying to get out of the water on the far side of the pool so she turned around and swam back to me and ended up waiting there while I checked out the dryfall. I stemmed over a portion of the long pool then walked along a ledge on one side to get past it. At the edge of the drop at the top of the fall I found some webbing tied around a chockstone that somebody else had rappelled from (and which Chris and I used the following day when we returned to rappel off the dryfall). 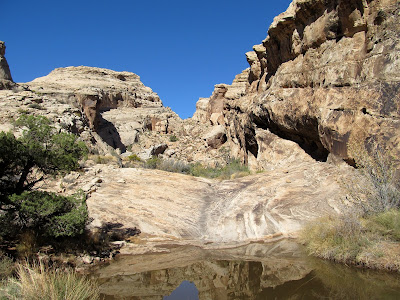 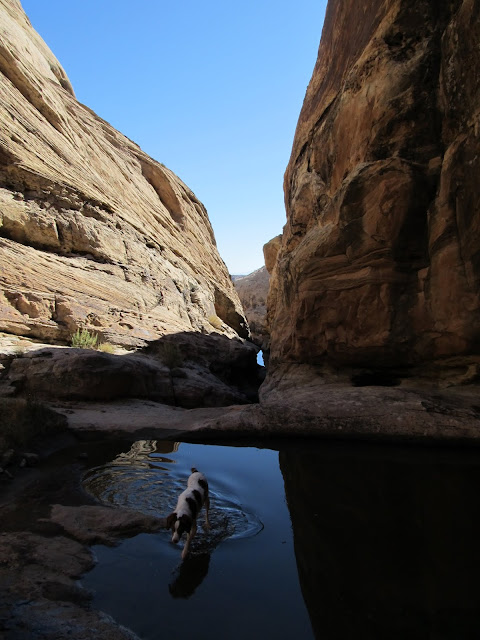 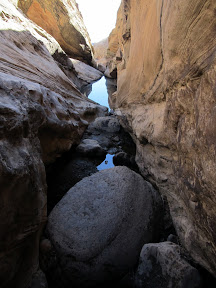 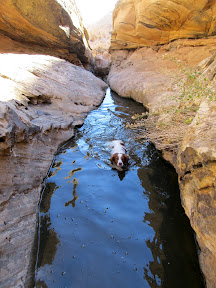 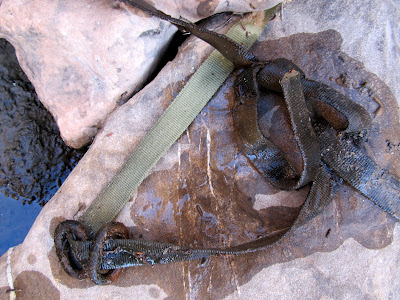 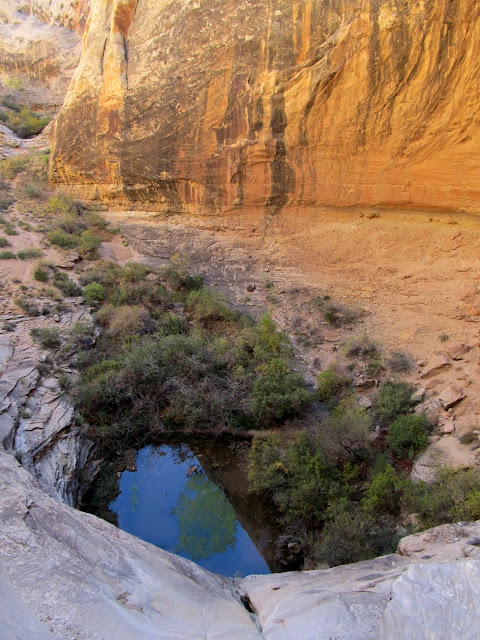 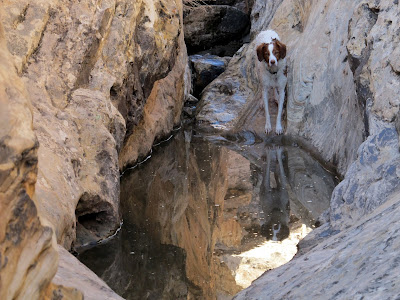 I wasn’t looking forward to returning up the bouldery section to get out of the canyon, but earlier I’d spotted an improbable-looking route up to the south rim that was worth exploring. There are a couple of large cracks along a fault in the sandstone, with a fin rising up between the two cracks, and it appeared that with some luck I might be able to ascend one of the cracks to exit the canyon. I wasn’t sure which crack to try first, but I consulted some photos I’d taken from the northern rim earlier that morning and decided to try the right (western-most) crack. I ascended the crack until it narrowed up and eventually put me on top of the fin. From there I had to drop into the larger left crack to continue my ascent. There was thick brush to negotiate, and ahead it looked like the crack narrowed and ended in a box canyon. I found a weakness in one of the cliff walls that looked as though, if I could climb it, it would put me up in the wide-open part of the Reef where it would be an easy walk back to camp. I tested it out and found that I could climb past the most difficult part, but getting Torrey up it might be a challenge. I climbed back down to where Torrey was waiting, grabbed her collar and made it clear that she was going up whether or not she wanted to. With some encouragement and a little shove from me, she jumped right up the cliff and scrambled her way to the top! I was delighted that I didn’t have to return via the boulders in upper Spring Canyon. It had taken me about 3.5 hours to get to that point, but it was an easy hike of less than 30 minutes from there back to camp. 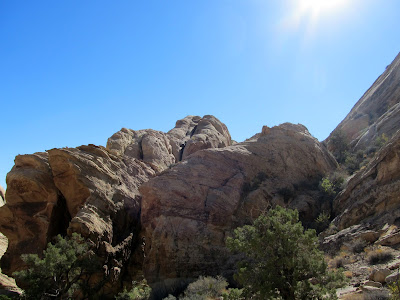 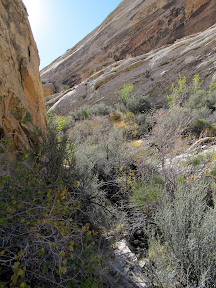 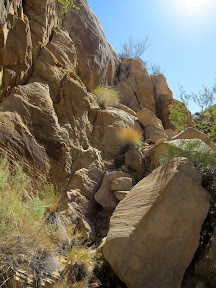 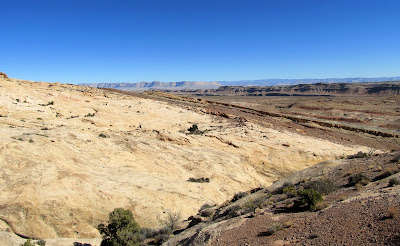 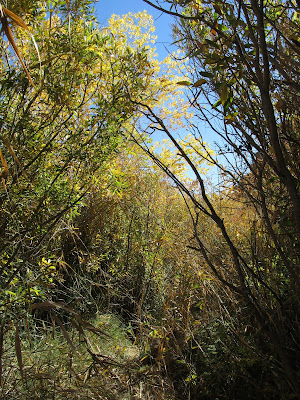