Yep–another trip to the San Rafael Reef, and my fifth since Christmas. In typical fashion, after my last trip there I learned of some rock art in the same area that I wasn’t aware of at the time. A very knowledgeable friend read my last blog post and generously offered up some waypoints to visit the next time I’m in the area. With Traci being out of town this weekend I didn’t want to spend it lounging around the house, so Michael and Bradley and I set out on an overnighter to visit some of this rock art. The low temperature was forecast to be 46° on Friday night, so even though the kids don’t have good cold-weather sleeping gear, I was sure they’d be comfortable at night. On the way to camp at Garvin’s Chimney at the mouth of Old Woman Wash, we stopped at two pictograph panels. I’d been close to both of them on several occasions and never knew it. The first one had some historic names painted and scratched into the canyon wall. The pictographs consisted of several hand prints and figures and many, many lines. The interesting thing about the hand prints is that they were made by child-sized hands–very cool! The second set of pictographs were in a small alcove that was partially buried in sand, hence the name Buried Site. Some of the figures had been buried further by sand since the photos I’d seen of the panel were taken, and I didn’t try digging any of it away. 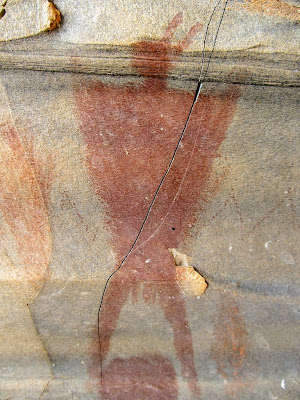 Those were the only rock art sites I planned to visit that evening, so we moved on to our planned camp spot. It was fairly windy, so much so that I didn’t want to try setting up the tent until it calmed down. After lazily sitting in the bed of the truck while the kids ate a snack, I realized it was foolish to just sit there waiting for the wind to subside when there was some beautiful country nearby begging to be explored! We started up Old Woman Wash but quickly took a side canyon and started scrambling up the slickrock. I started seeing a lot of lithic flakes, and Bradley began collecting them as we hiked. We passed a pothole full of water that had two thick iron bars embedded into the sandstone just above it. I’m not sure what the iron bars were put there for, but I assume it had something to do with the old mining activity farther up the main canyon. Later we also saw a couple of 4-inch pipes embedded in the sandstone. One was sticking up out of a pothole full of water, and both had iron caps screwed on tightly so I couldn’t tell how deep they went. We hiked until after the sun went down, about a mile and a half overall, and when we returned to camp the breeze was calm enough to start a camp fire and pitch the tent. The fire burned down to coals while we set up camp, then we threw some ham, turkey, and cheese wraps, wrapped in foil, into the fire for our dinner. It was 8:30 by the time we ate, and we stayed up another hour and a half before turning in for the night. 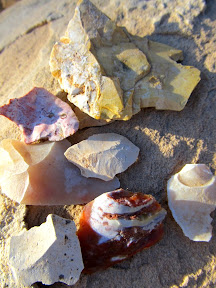 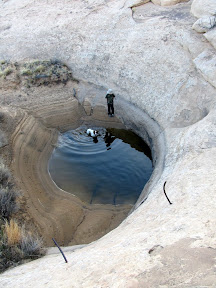 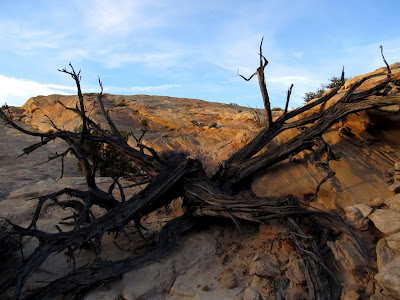 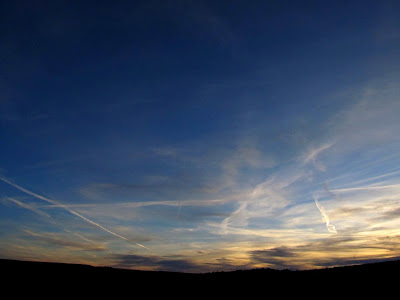 As we settled into our sleeping bags we heard coyotes yipping in the distance. Michael and Bradley didn’t seem concerned by the sounds, which I was glad for. It’s such a common occurrence and I actually enjoy the sounds of coyotes while camping, but I didn’t want the kids to be afraid during the night. It got a bit colder than the forecast, down to 38&deg outside and only 42° inside the tent. With two sleeping bags each the boys stayed plenty warm, and I was comfortable in my single bag this time–all my previous trips this year I needed both my sleeping bags to keep warm. Having gone to bed early, I was awake well before sunrise. I kept watch on the light hitting the east side of the tent, and when it was sufficiently bright I got up and went outside for a few photos as the sun broke the horizon. The boys were awake shortly after me, and we had a breakfast of oatmeal and pop tarts, with hot chocolate for them and coffee for me. We took down camp and packed everything into the truck, filled up our hydration packs, and drove up the road to our first canyon hike of the day. 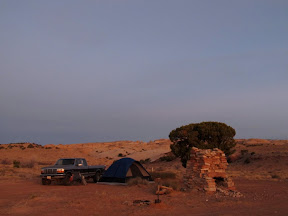 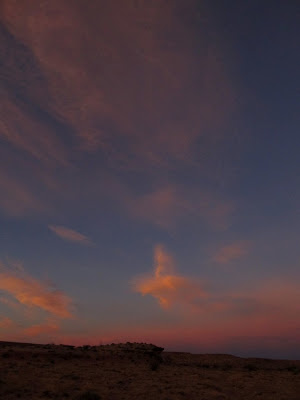 There were again many lithic flakes in the canyon. We stuck to and scanned the north side of the canyon just in case there was rock art which I wasn’t aware of, but I didn’t see anything before coming to the first set of petroglyphs. The rock art here was different in style than most in the area, though both sites in this canyon were similar. On the way to the second set of coordinates, about 600′ past the first, I first heard then smelled (but never saw) a skunk at a spot where some trees would have forced us through a choke point between some trees and a few small alcoves. We gave that area a wide berth and came back to the canyon wall at the second set of petroglyphs. A rock rolled out from under Michael’s foot while he scrambled up the steep canyon wall and he hurt his knee, so while he sat in the shade and waited for the pain to subside, Bradley and I checked out the rest of the cliff face. Finding nothing, we gathered Michael on our way back to the truck. 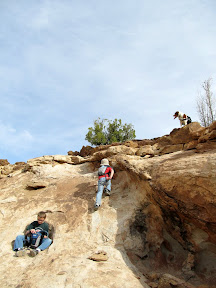 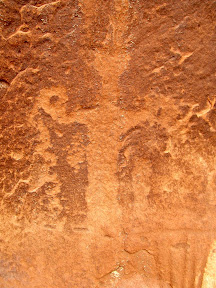 It wasn’t a long drive to the next canyon I wanted to hike. The canyon itself was very interesting, with dozens of water-filled potholes that Torrey enjoyed thoroughly. The few petroglyphs weren’t terribly interesting. The kids wanted to stay near the rock art and play in the pools while I hiked another third of a mile up the canyon just to check it out. I’m glad we didn’t simply turn around at the rock art because I found an arrowhead lying in the bottom of the wash. Even more interesting is that there was one set of very recent (probably less than a week old) footprints heading down the canyon, and their maker stepped right over the arrowhead apparently without seeing it. 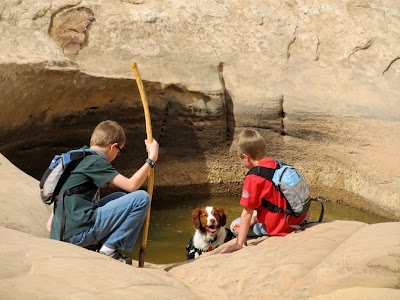 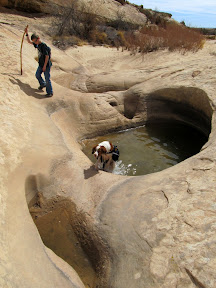 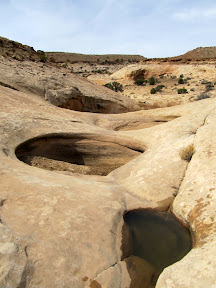 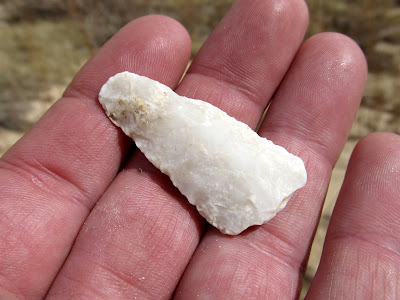 We’d seen all the rock art that I knew of in the immediate vicinity. We ate lunch at the truck then got back on Highway 24 for a few miles before exiting on another dirt road to check out one last pictograph panel. I’d ambitiously wanted to see this panel plus a few more in Straight Wash, but by this point I knew we didn’t have time for the latter. On the way in, and after a couple of rough and sandy stretches of road, there was a car parked just before a really rough spot. It was an older Corolla (I think) with Colorado plates, and I admired the owner(s) for making it that far and presumably hiking farther toward the San Rafael Reef. I parked the truck near the drainage that contained the Rey Lloyd Hatt pictograph site, and just before we started hiking, an attractive woman in a white Explorer pulled up and asked if there was any good hiking in the area. I told her about a nearby canyoneering route we were planning on checking out after the rock art, but for some reason I didn’t think to tell her about Straight Wash and Eardley Canyon which were also not too far away. She thanked me and drove off, then the kids and I hiked down the wash. It was a short jaunt to the pictograph site. The rock art was amazing! There were two beautiful figures side-by-side on one side of the canyon, and many other figures and lines on the other side. 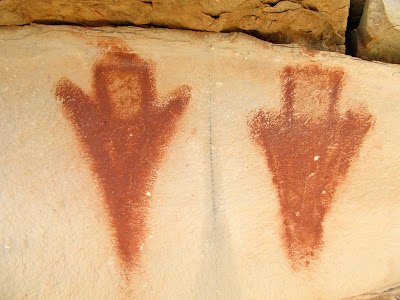 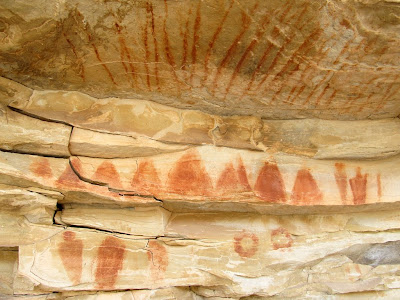 We moved along to our final stop, a hike up Zero G Canyon. Just as we were starting to hike, the woman in the Explorer came back down the road heading toward the highway. I guess she didn’t find any worthwhile hiking. We waved at each other, then the boys and I continued up Zero G. The canyon was first rocky, then sandy, then finally just bare slickrock. After three quarters of a mile of hiking we reached the end of the canyon at a huge pool, pouroff, and tree. There’s an interesting canyoneering route above the pouroff that I’m hoping to do this year, but we couldn’t visit it this time because it required either a longer hike or a drive on a closed road, neither of which I wanted to do right then. We spent some time admiring the box canyon and pool of spring water. It was a beautiful spot to relax after a warm spring day of hiking. We hiked back to the truck and played around a bit, hopping over pools of water and catching lizards. I loaded the kids up with snacks and we started the drive home. Just before reaching the car parked near the rough spot in the road I encountered a younger couple walking along the road. They were coming back from Straight Wash, and I inquired about the water situation there because of the mild and dry winter, and they said it was plenty wet still. That gave me hope that it could be a nice destination for the next time the kids want to go camping and hiking. 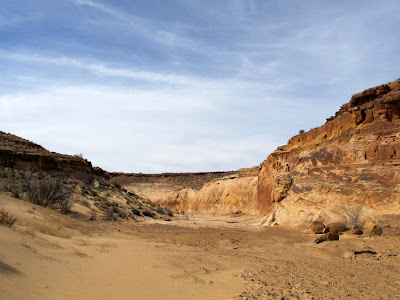 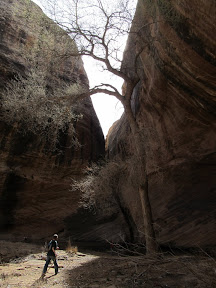 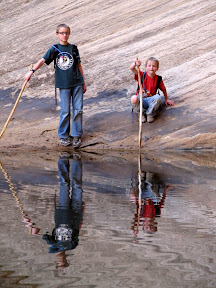