I had hoped to make this past weekend epic by spending a couple of nights along the San Rafael Reef and hiking more than 15 miles over the course of two days, but it didn’t turn out as I’d wanted. My plan was to camp Friday and Saturday nights about half a mile east of Mormon Tanks, and spend Saturday hiking a nearby canyon, then pack up camp Sunday morning and spend that day returning to the Ekker rock art panel and seeking out some rock art I’d missed on my last trip to that area. I headed down Friday after work, and stopped in Iron Wash during the drive in and did a short hike starting at the barricade at the WSA boundary. I saw the J.A. Watt inscription from 1894 that I was expecting to see, but what I didn’t expect were some grinding marks and sharpening grooves in a nearby shallow cave. I arrived near my intended camp spot and ended up having to camp about a quarter-mile south of there at the nearest smooth and level ground. I had a nice dinner of country-style pork ribs and vegetables cooked in foil over a camp fire, then spent the evening reading a book near the fire and taking some night photos of the stars and the waning full moon. It was a boring evening, and it was all I could do to stay up as late as my normal bedtime. 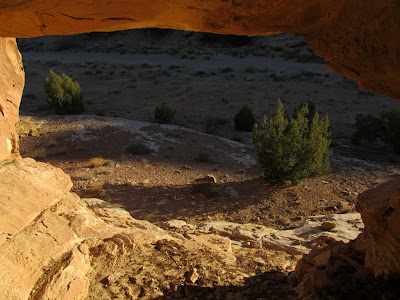 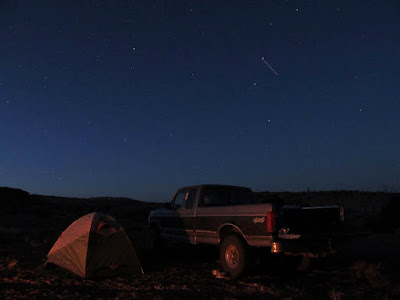 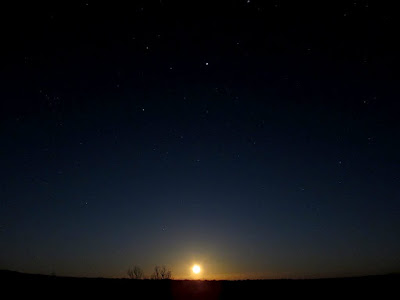 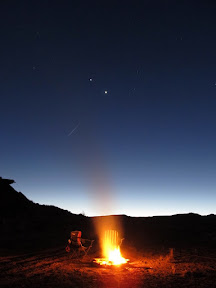 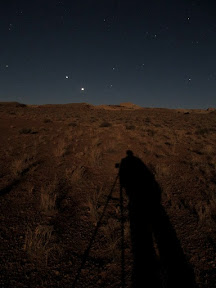 I slept well that night–perhaps the best night I ever spent in a tent–and got up just after sunrise. By 8:00AM I’d finished my breakfast of oatmeal and coffee and I was hiking along the road to the start of the canyon I wanted to hike up. I chose this canyon because it went a fair distance up the San Rafael Reef, and from the satellite imagery it appeared to be full of potholes that would hold water and, hence, attract the native Americans who would have inhabited this region hundreds of years ago. I’d hoped it would be a successful rock art hunting expedition. Early on, parts of the canyon were shrouded in darkness because of the sun still being low in the sky. I didn’t see any rock art in the lower canyon, but I found a couple of shallow caves that had evidence of habitation–soot on the ceiling and old charcoal on the floor. After passing up several promising cliff faces and finding no rock art, I mostly gave up any hope of finding any.

Farther up the canyon I encountered several pools full of water. Torrey was using her new dog pack and carrying enough food and water for a moderate day-hike, but with all the water in the canyon she probably didn’t need any of the water she was carrying. I eventually came to a large but mostly empty pool that was full of ice covered in sand. Beyond the pool was a dryfall that looked difficult or impossible to climb, but I found a way around it on the right side that I had to shove Torrey up. Beyond that was a pretty side canyon that slotted up and was full of water, but I couldn’t go far up it because of the water. In the main canyon there was one pothole and dryfall that I could climb around, but past that was another that just couldn’t be bypassed. I tried to get Torrey to climb out of the canyon with me up a very steep sandstone slope, but it was almost too much for me and certainly too much for her, so I reversed my route down the canyon and looked for another way out to the rim. 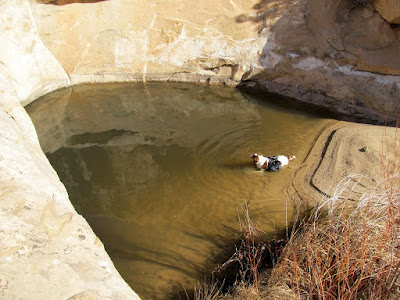 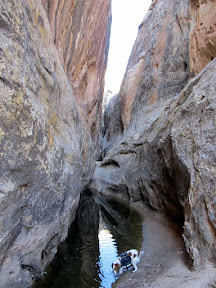 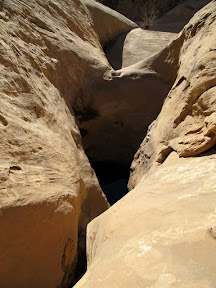 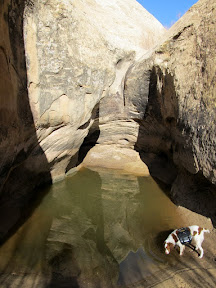 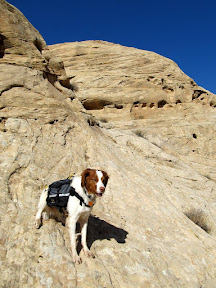 While I was backtracking down the canyon, I found an arrowhead that was only a few feet from where I’d passed by on my way up the canyon. That’s pretty typical of me when I’m hiking–I keep my eyes on the canyon walls when in a new area, but I watch the ground when covering a familiar route. After backtracking more than half a mile down from the dryfall, I found a place to scramble out of the canyon to the north and worked my way into an adjacent canyon. This canyon held some promise for rock art as well, but despite sticking to the north canyon wall and even climbing some rock fall to check out some cliffs, I didn’t find any. 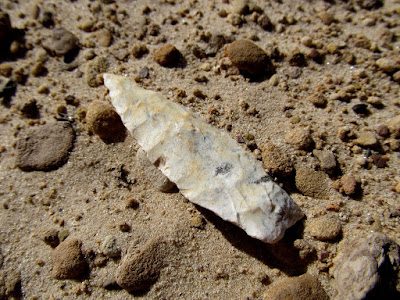 A nice ramp along the north side of the canyon diverged from the floor, and I followed the ramp up to the canyon’s rim. I stuck to the canyon rim as much as possible, but the canyon’s upper drainage was small and I crossed it without realizing it. After routefinding and bushwhacking through some fins and cracks, I found myself at a nice spot overlooking the canyon that I’d originally started hiking up that morning. I took a break there and ate lunch while soaking in the view. I’m not sure why, but after lunch I didn’t feel like continuing the 2.5 miles farther up to the top of the Reef. Instead, I skirted a little farther up the ridge I’d been following, then circled around to a smaller drainage that led back down the Reef. 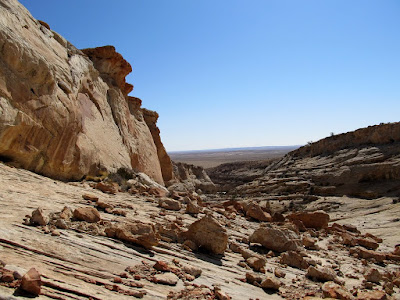 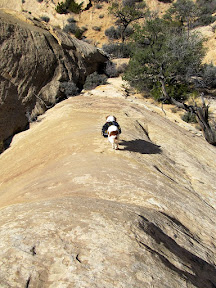 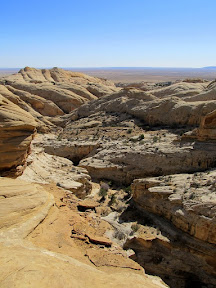 Despite having a GPS telling me exactly which direction to go, I kept feeling like west was south. I ended up following some fins nearly to the rim of Iron Wash once, but got turned in the right direction and crossed my previous tracks while following a slightly different route back down the San Rafael Reef. Once I hit the bottom of the canyon that I’d used to access this part of the Reef, I followed it all the way back to the road, then hiked along the road to where my camp was set up. I was all funned out for the weekend, so I packed up camp and headed home. I’m not sure whether it was the thought of spending another lonely night in the same spot, or just being disappointed in not finding any rock art, but I was glad to be on my way home. The Reef will be there the next time I return. 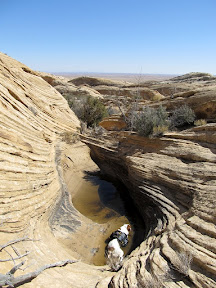 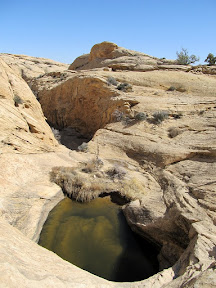 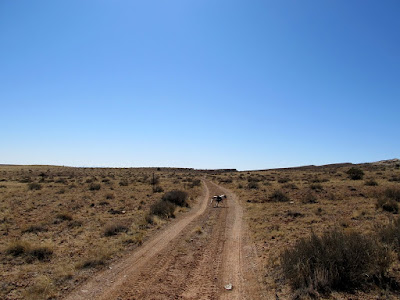