I spent most of this weekend at home hanging out with my family and cleaning the house a little, but by this afternoon I needed to get outside. I went for a mountain bike ride on the trails north of Price, riding for about two hours and covering 5.7 miles. I was expecting most of the snow to be gone and the trails to be dry, which they were on the southern end of the trails closer to town. I started by riding up Knot Pete’s Rim, where there was a lot of recent foot traffic but very few mountain bike tracks on the trail. The dirt was soft and made for more strenuous riding, which got worse as I traveled north. Once I crossed over the gravel road between Knot Pete’s and the Smo Joe’s trail, there were no tracks at all. I plowed through the soft dirt and crusty snow, getting bogged down often and having to dismount to keep from falling. 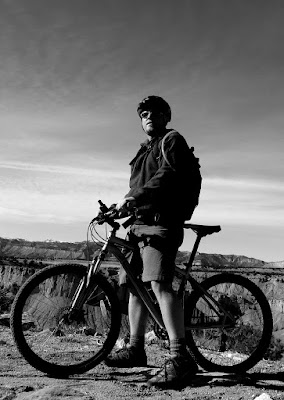 I almost bailed out of the trail a couple of times when I was close enough to a dirt or gravel road, but I’m glad I stuck with it. At the top of Smo Joe’s, I took the cutoff trail over to Luke’s Trail. There was still plenty of snow on upper Luke’s, but it was mostly downhill and it was easier going. Once I got to the Labyrinth, the trail was well-traveled by both foot and bike traffic. It was much more enjoyable after that and I was able to maintain some speed, though Torrey got quite worn out running alongside during the faster downhill portion. The last quarter of the ride made the rest of it worth it.