I drove to Provo today for a work meeting, and on my way home I had planned to drive up Diamond Fork Canyon and hike up to the Fifth Water hot springs. There is a geocache there which has sat unfound since it was placed last May. I was irritated by (presumably) the Forest Service when I got to within a few miles of the trailhead and found a gate blocking the road. Apparently it’s often closed during the winter so that they don’t have to plow the road, but this winter there isn’t enough snow to warrant the closure. On my way back down Diamond Fork Canyon toward US-6, I tried thinking of a Plan B. There were three things I’ve long wanted to do in the area: climb up to the Thistle Junction benchmark, explore an abandoned train tunnel, or scramble around on the Navajo Sandstone above the Utah County Sheriff’s firing range. After stopping on the highway to check out the snow situation near the benchmark, I chose the first option. 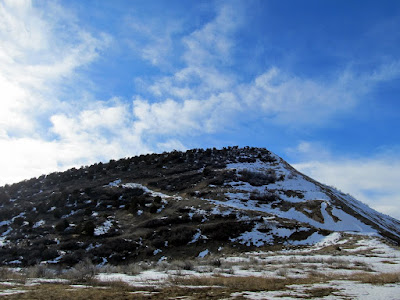 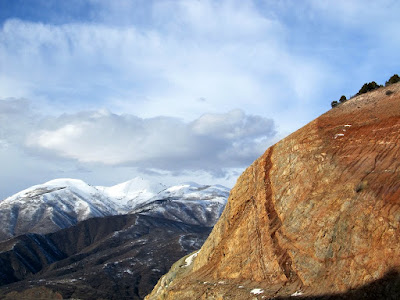 I wanted to climb up the north ridge of the mountain, but the snow was too deep. Instead, I hiked up from the east. There was what appeared to be a road cut into the eastern slope, with several switchbacks leading to near the top of the road cut. Once I got up onto the “road,” however, it was clear that it had been filled in after the highway construction and the slope was just as steep as the natural hillside. It turned out to be easier to scramble straight up the hillside rather than follow the old road. It took me about 35 minutes to get from the truck to the summit ridge, a horizontal distance of only 0.29 miles, but with 500 feet of elevation gain. 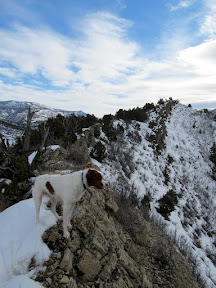 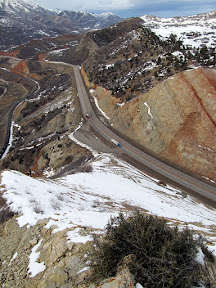 The summit ridge runs north-south, with the highway cut on the north side and the benchmark on the south. I topped out 100 feet south of the road cut, so I followed the ridge north to get a glimpse down into the road cut. The ridge was razor thin, with a very steep slope to the east and a purely vertical drop to the west. That, combined with the snow piled up places, made for a scary 100 feet of ridge walking. After peering into the road cut, I hiked south along the ridge until I came to the high point. It took me several minutes to find the benchmark. I assumed it was buried under the snow and I wasted a few minutes digging through it, but I eventually found the benchmark under a thin layer of dirt and pebbles. 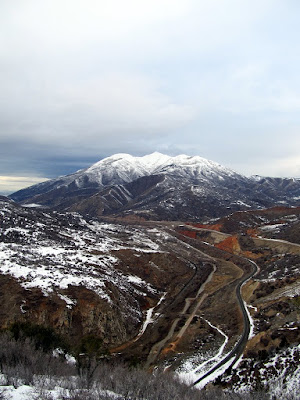 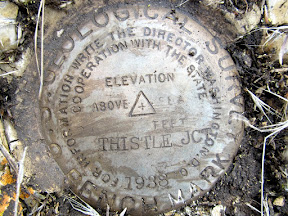 It had gotten cloudier while I hiked up the mountain, and there were heavy winds at the top of the ridge that cut through my clothes and froze the sweat that had accumulated during the ascent. I quickly hid a geocache in a tree about 100 feet from the benchmark, then hurried down off the ridge to get out of the cold wind. I tried to stick to the rocky scree slopes on the way down, and I was able to make large, bounding steps. It only took 15 minutes to get down the hillside. This small peak has always been in the back of my mind, and it felt great to check it off my list.