On Sunday and Monday of the Martin Luther King, Jr. holiday weekend, I camped and hiked solo in the San Rafael Reef. The plan was to hike Farnsworth Canyon, then camp overnight nearby and hike the following day to the high point of the Reef between Farnsworth Canyon and North Temple Wash. I packed a little of my gear on Saturday, then Sunday morning finished loading up the truck and set out from home. I was parked at the Farnsworth Canyon trailhead and hiking by 1:00PM. The sky was overcast and the lighting wasn’t great for photos, but temperatures were perfect for hiking. The canyon was an easy stroll and I took my time, especially enjoying the textures in the short narrows section. After the narrows was a bouldery section, then the canyon opened up wide before narrowing just a bit. In the wide section was a part of the wash that’s perpetually shaded this time of year and the snow from mid-December hadn’t yet melted. There was a single set of footprints through the snow, going up the canyon, so it appears that only one other person has been there in the last month. He must have exited another way because I didn’t see any footprints leading back down the canyon.

I knew there were some pictographs somewhere in the canyon, but I didn’t know the exact location and had only seen closeup photos of the rock art. I kept my eye out for it as I hiked, and it still came as a surprise when I spotted it. The pictographs consist of two panels, one more sheltered than the other, so one is faded while the other is darker. In the bottom of the pictograph alcove was more rodent crap than I’ve ever seen (or walked in)! After admiring the rock art I continued up the canyon until I reached the second of two capped drill holes. This last drill hole is at the mouth of a small fork in the canyon that contains three natural arches, which I had hiked above in October 2010 during our fall geocaching camping trip. The hike up Farnsworth Canyon had taken about two hours, and it took a little less than an hour to get back to the truck. 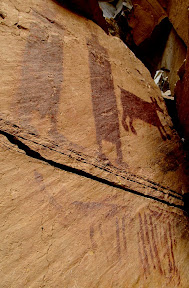 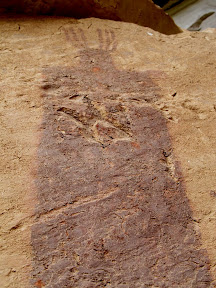 I drove just over a mile southwest on the dirt road until I came to a place to camp near where I planned to start my hike the next morning. I set up camp and started a fire as the sun went down. Sunset was pretty nice, but a short while after the sun disappeared behind the horizon, the clouds had an amazing pink glow on them. I heated a can of chili-mac over the fire for dinner, then settled into my camp chair and kept warm in front of the fire for the rest of the evening. Camping alone is boring. I read a book for a while, then attempted some night photography, then read the book some more, then stood close to the fire and alternated between roasting my front and back sides while trying to keep warm. It was breezy earlier in the evening but it calmed down by the time I went to bed at 10:00. My toothpaste was frozen, and I learned that a memory foam pillow turns into a brick in freezing temperatures. I slept well for a couple of hours, then some heavy winds woke me up at midnight. I kept very warm using two sleeping bags–they were so effective against the cold that I had to try finding the fine line between sweating and freezing my ass off, since opening the zipper let in a lot of cold air. It stayed windy all night, but I still had one of the most comfortable nights sleeping in a tent that I’ve ever had. 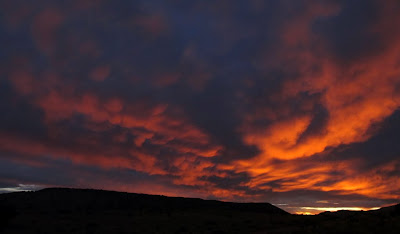 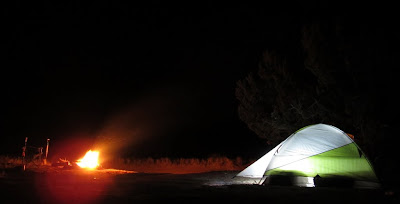 I was awake a little before the sun rose. It was still breezy, and I got the fire going again to warm up. I had oatmeal and coffee for breakfast, then took down camp and loaded everything into the truck. I started hiking up the San Rafael Reef right from camp. I’d planned on starting to hike in the next canyon to the northeast, so eventually I had to cross over the ridge between the canyons. After descending into the correct canyon, some bighorn sheep surprised me as they ran along the canyon rim above me. When they noticed me they stopped to stare, and I stared back for a while before moving on. The canyon was a fairly easy hike with steady elevation gain. There were a few large potholes–most filled with sand, but some with ice–that could be walked around or climbed through. I was unable to climb through one series of deep potholes, so I had to scramble out of the canyon and take a wide detour. 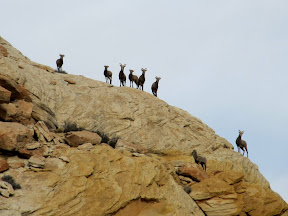 Near the upper reaches of the canyon I started hiking across several small drainages to get to a long, shallow canyon that formed along a fault line. After following the fault line canyon for a third of a mile I climbed out and started hiking up a wide ridge between two box canyons. This was the steepest part of the hike but it wasn’t too bad. After the initial steep part of the ridge the elevation gain became more gradual. I was surprised to see a couple of cairns closer to the top of the Reef. If anyone had navigated that far, finding the high point would be a piece of cake–I guess I just don’t understand why people build cairns. The high point was a small round knoll and it was an easy scramble to the top. I was half-expecting to find a summit register there (after having found one at the Ernie benchmark a few weeks earlier), but the top of the knoll was bare. There was another shorter knoll just north of the high point that had a pile of rocks on top, and though I wanted to scramble up it to check for a summit register, it looked a little dicey and I decided against climbing it. 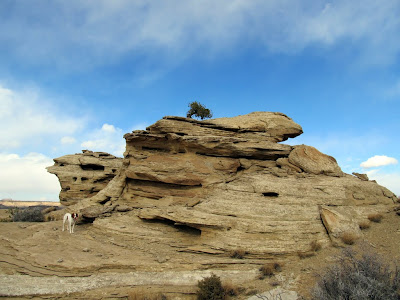 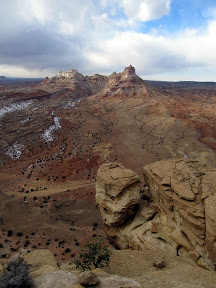 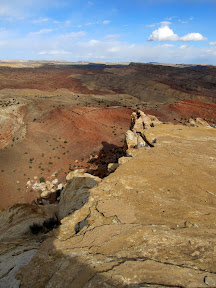 I followed pretty much the same route down the Reef, and it went much more quickly since I’d done all my exploring on the way up. Somewhere along the way I spotted a shallow cave that looked interesting, and as I approached it I saw some pictographs inside. However, as I got close I could smell the strong odor of a skunk. Crap! I really wanted to check out the alcove, but I was very wary about running into its occupant. I slowly creeped my way into the alcove, stopping often to listen and look for the skunk. Luckily I never did see it, but I also didn’t spend as much time in there as I’d have liked. The pictographs were very interesting. One figure was abstract and unrecognizable, but the other was snake-like with small fins or spikes protruding from its back, almost like a dragon. High above the pictographs were some fingerprints on an overhang that must have required a ladder of sorts to reach. There was another very faint figure scratched into a boulder with some painted squiggly lines across the body. After standing there a while just looking around, I realized I was standing right next to two metates that had been stacked one on top of the other. I laid them side-by-side to take a photo, but otherwise left them alone. There were also a few chert flakes in the alcove, but I found no other artifacts. This place alone made the entire trip worthwhile. I continued the hike out of the Reef, this time following the main canyon out to the road and then walking along the road back to the truck. All told I hiked 12 miles during the two days–five in Farnsworth Canyon and seven up and back down the San Rafael Reef. 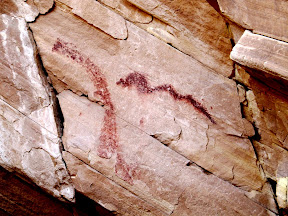 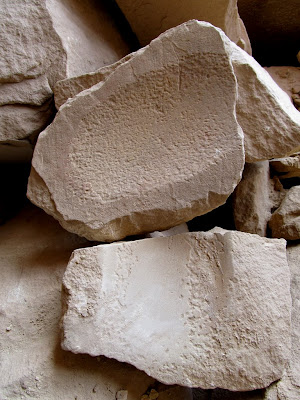