The annual geocaching event that some friends and I usually attend in southwestern Utah each March was canceled for 2021, but unfortunately the death of our friend Tom brought us all together anyway in February. Tom died on February 3rd and we had a memorial for him on Saturday the 13th. My wife and I traveled to the area on Thursday after work and stayed with friends in Washington.

On Friday Paul and I got together with Jim and we hiked to the high point of the White Hills, about 10 miles west of St. George, to find a geocache (“You’re Gonna LOVE This!” – GC8RDZW) that had been placed nine months earlier with no finds yet. Jim picked us up in his Jeep and we drove out past Santa Clara, and then south to the west side of the White Hills. We didn’t have a plan since on the map there was no obviously easy route to the top, but from the west we could see that it was too cliffy for a direct ascent from that side. We drove to the south side while I scoped out the sat imagery in Google Maps and found a suitable dirt bike trail that would take us to the top. We parked at the edge of Cottonwood Wash and hiked northwest up the steep sides of the mesa.


Climbing out of Cottonwood Wash 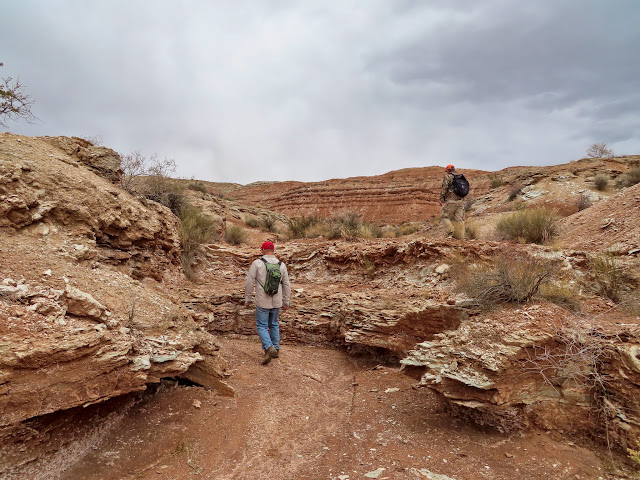 Steep climb onto the mesa 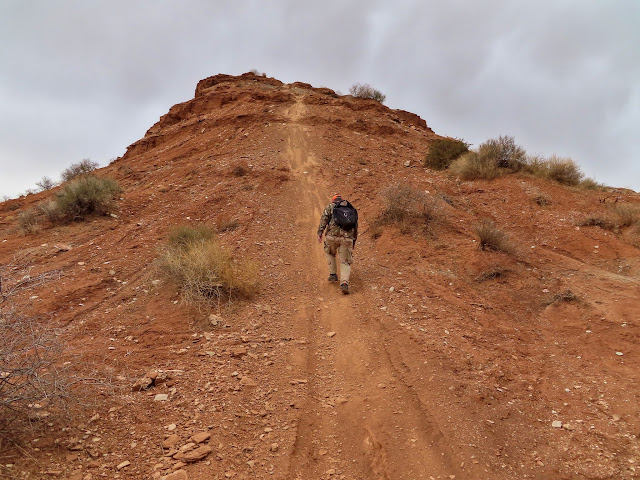 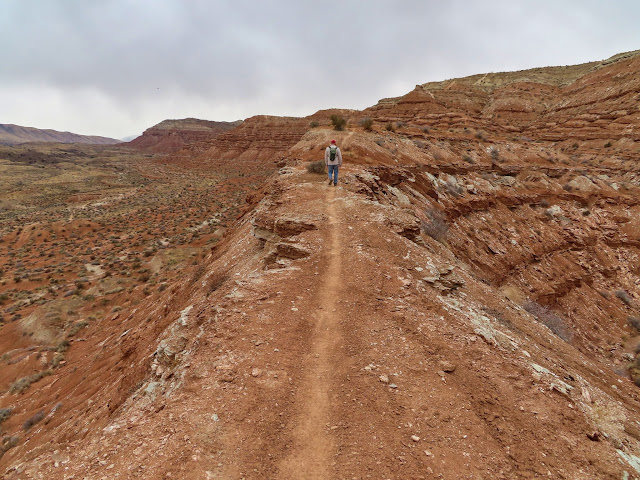 View down the ridge 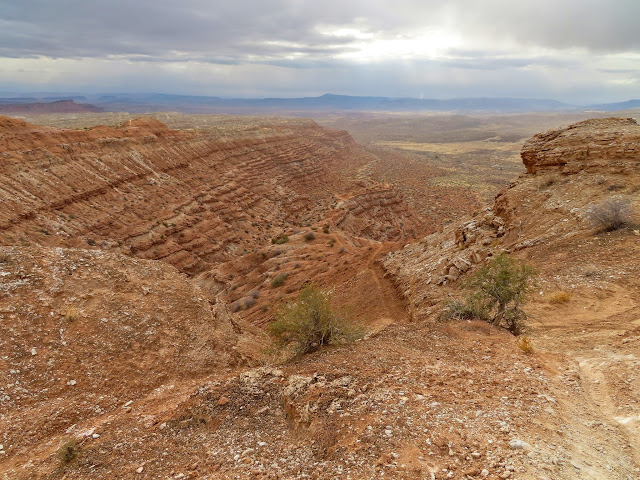 Once on top there was still a lot of elevation gain left to reach the high point but for the most part it was more gradual. It snowed very lightly for a moment but it was still warm enough, and we were working hard enough, that we were still comfortable in t-shirts. The gray skies cleared up a bit as we neared the high point. As the sun shined occasionally it actually got pretty warm.


Crossing the head of Cove Wash 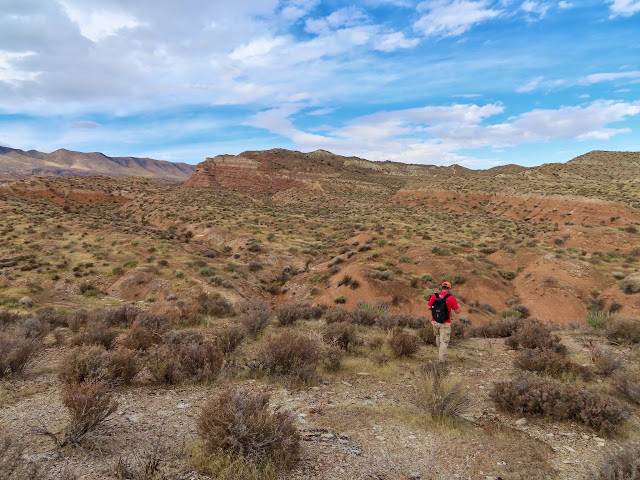 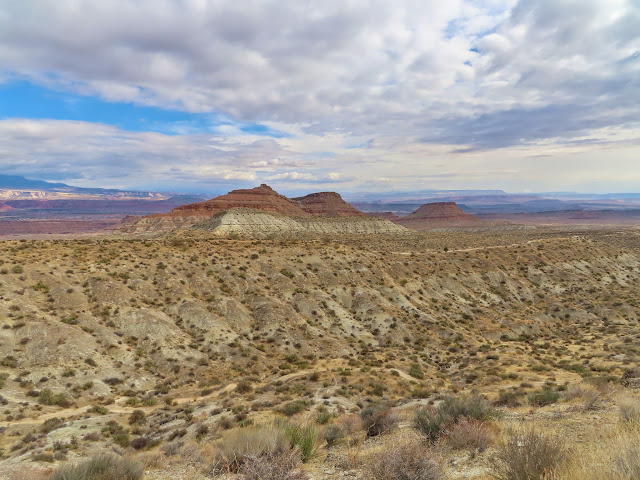 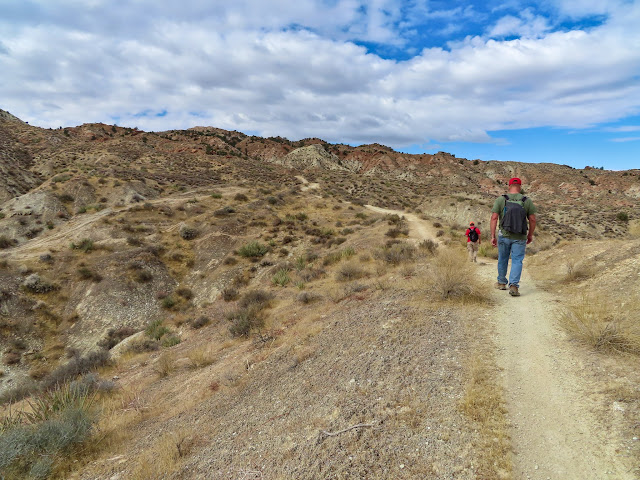 We reached the White Hills high point, found the geocache, and took a lunch break. It had taken about three hours to get to the top, we rested for 20 minutes, then spent another two hours getting back down. None of us had really planned on hiking that much, but our round-trip distance was 7.6 miles with 1,500′ elevation gain. 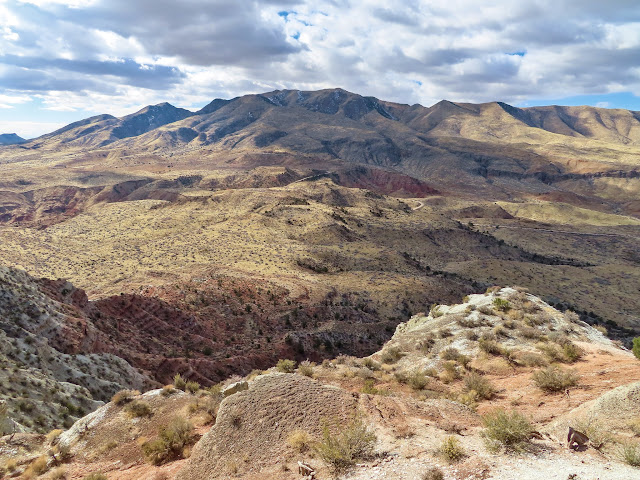 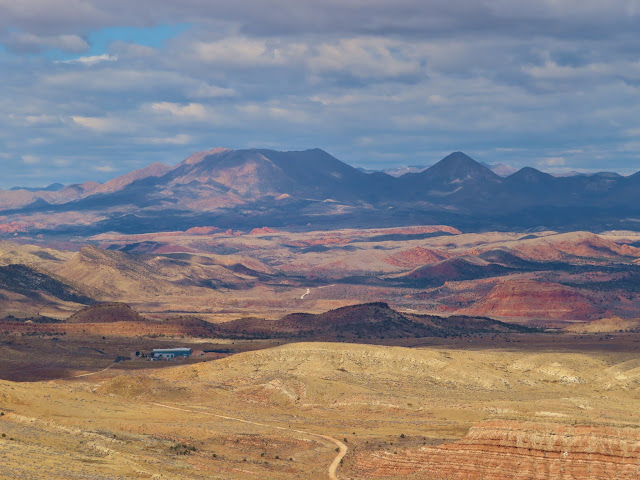 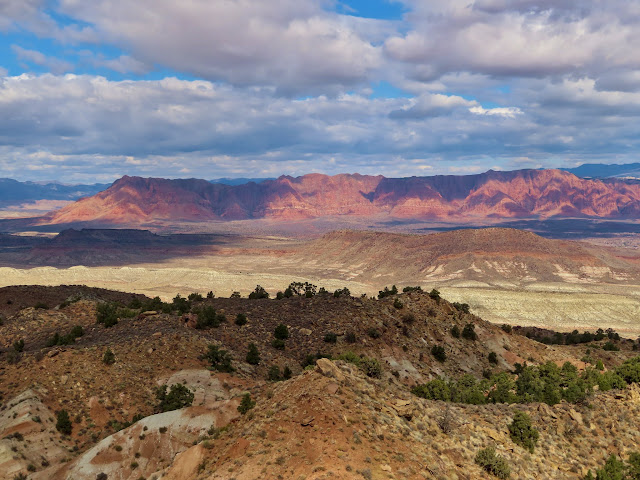 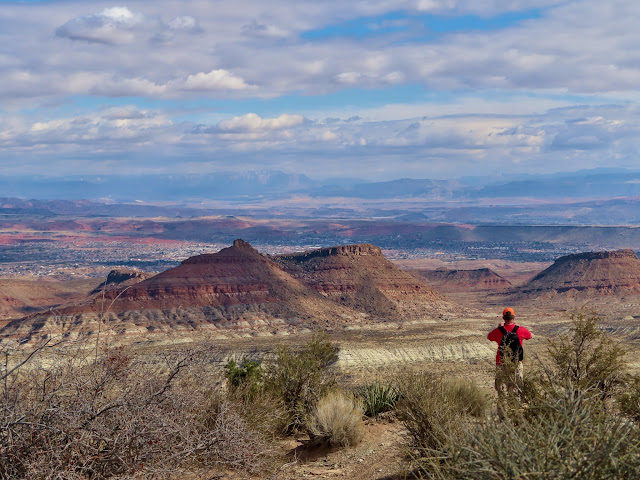 Jim and Paul at the high point 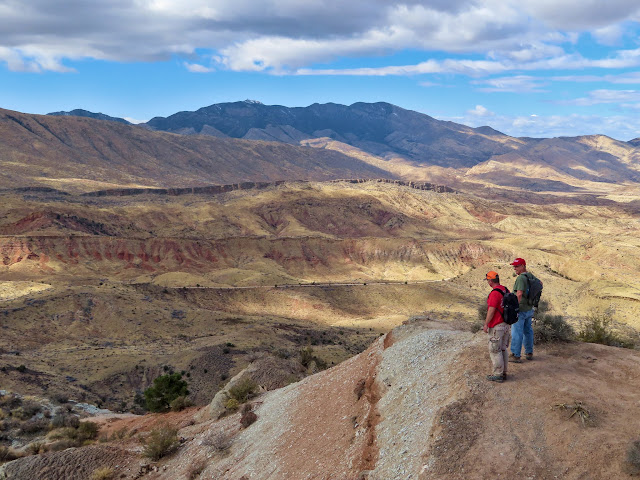 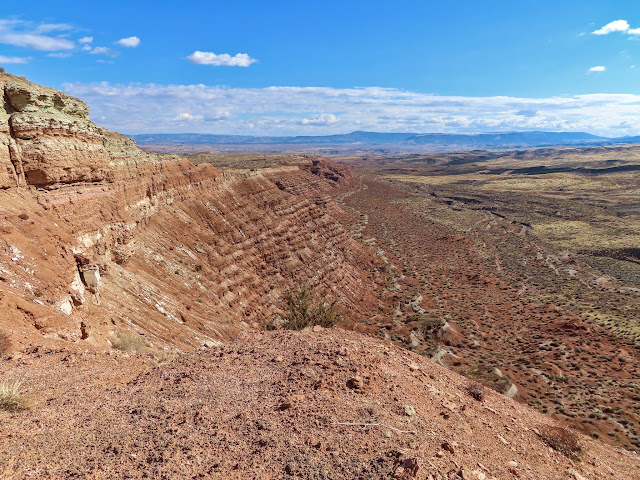 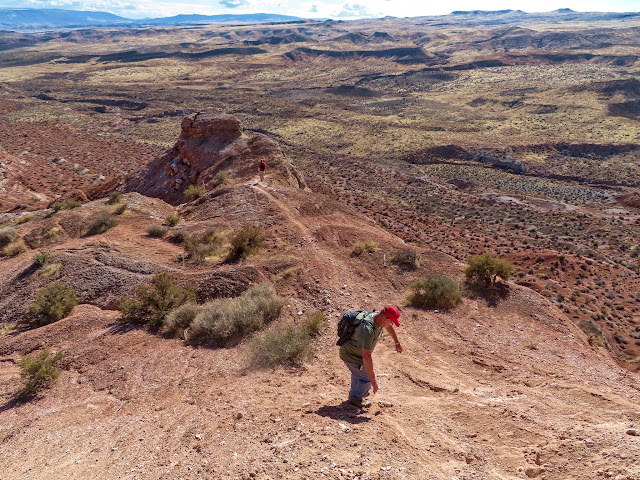 The next day was Tom’s memorial. There were a lot of geocachers there. I met Tom through geocaching, and apparently so did a lot of other people. I met some of Tom’s family who I hadn’t met before, including his son Justin. He planned a hike with a few of us for the following day to spread some of Tom’s ashes on top of Shinob Kibe, which is a small mesa across the Virgin River from Paul’s house. A small group of us met on Sunday morning for the hike. It was me, Chris, Paul, Kenny, and Justin and his daughter. Our wives (including Tom’s) stayed at Paul’s house and watched us from the balcony about half a mile away. 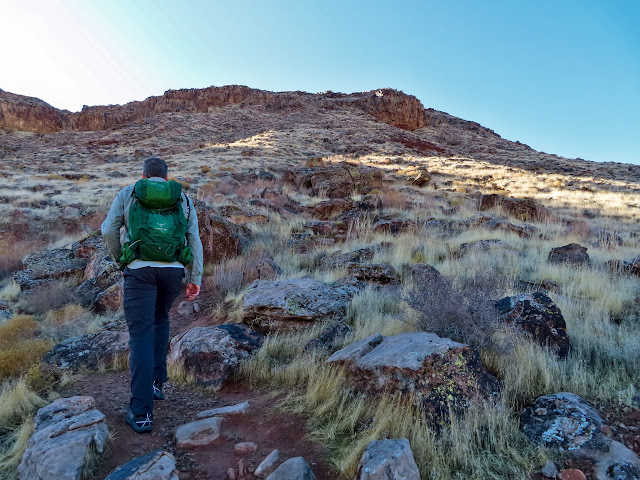 View toward the trailhead 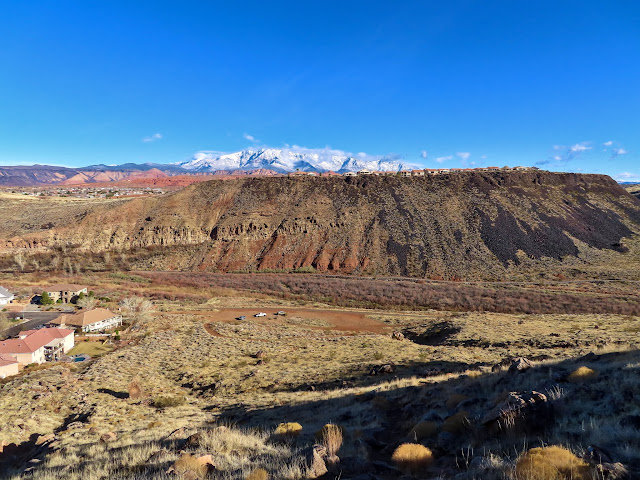 The group on the trail 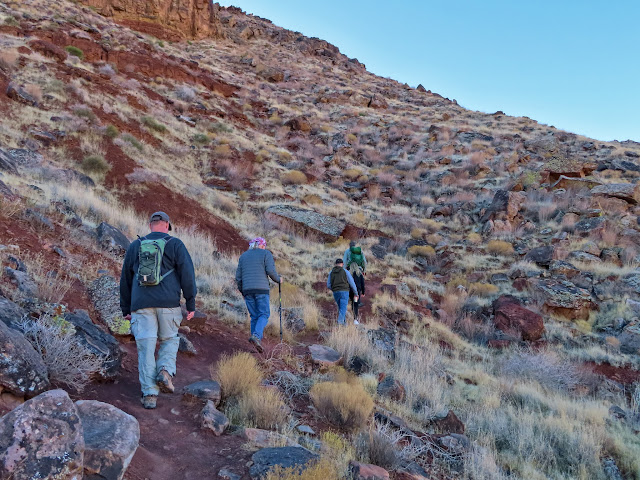 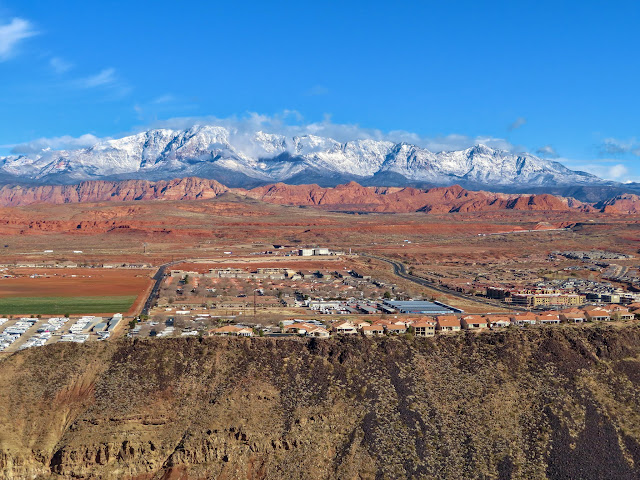 The ladies watching us watch them 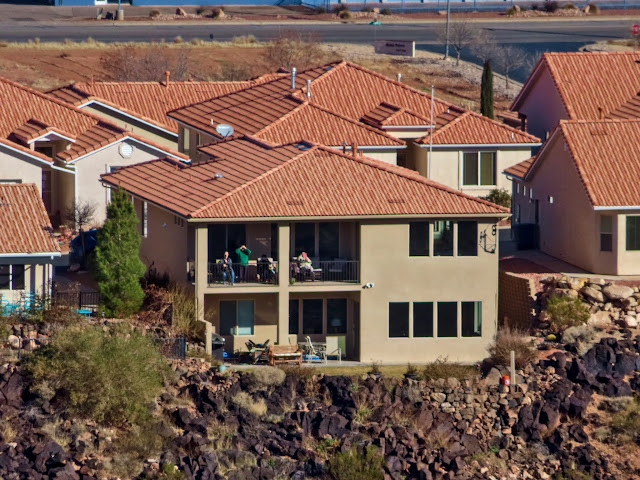 It was a short but steep hike, gaining about 650′ in two-thirds of a mile. We first went to the high point and the concrete navigation arrow, then descended to a spot on the north edge of the mesa where Justin scattered a small container of Tom’s ashes. 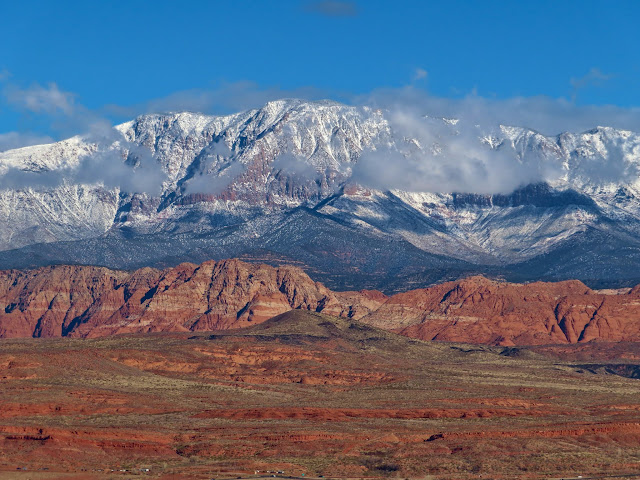 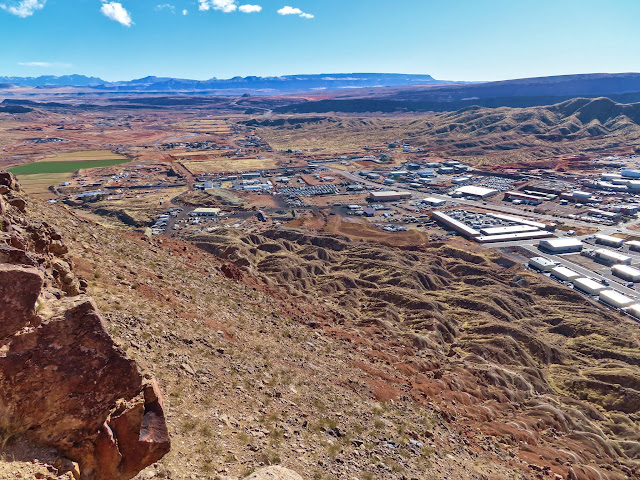 Chris on the edge 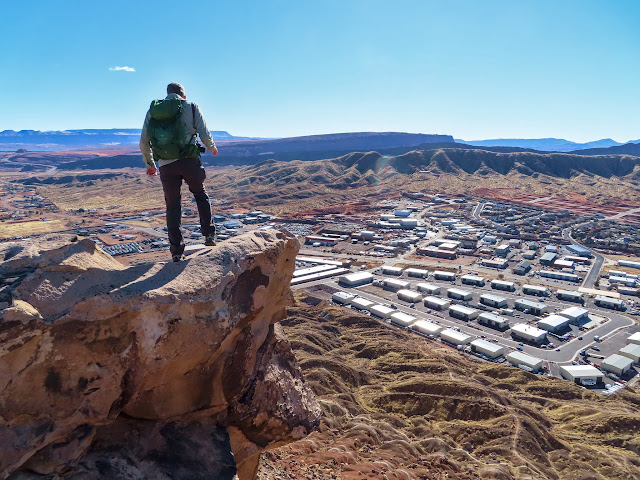 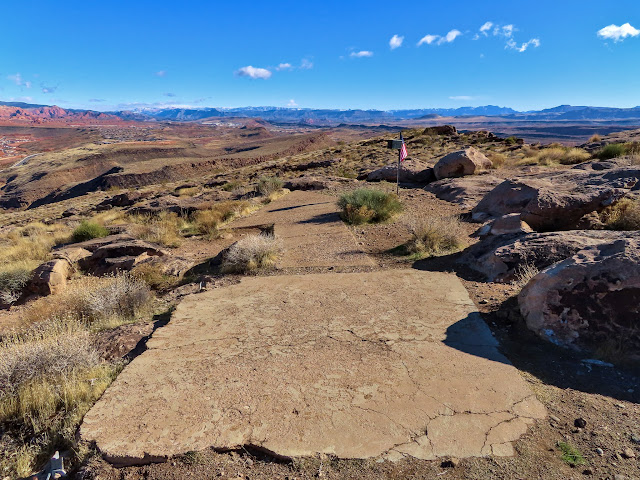 Kenny on the mesa’s edge 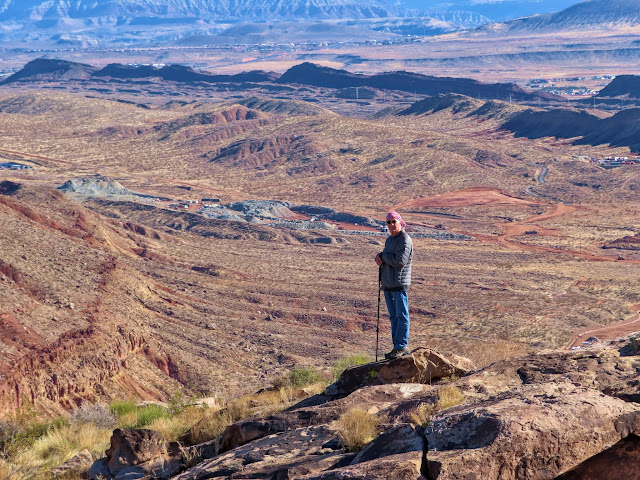 Justin pouring one out for Tom 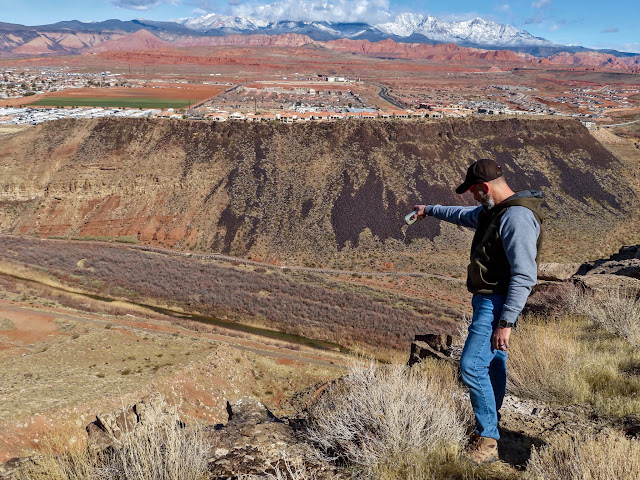 After the hike we all regrouped at Paul’s house, gave hugs and said goodbyes, and everyone went home. It was a bittersweet few days, mourning a friend but also meeting and getting to know some of his family.
Photo Gallery: SWUT 2021 – White Hills and Shinob Kibe