During my last outing of 2018, on New Year’s Eve, I experienced a lot of flats. Chris, his fiancee, Dollie, and I hiked to Prickly Pear Flat to visit the rock art there. I also got two flat tires on my Jeep. This was my third trip to the rock art and I didn’t bother to take my regular point-and-shoot camera–all the photos here were taken with my phone. Chris had never been to Prickly Pear Flat, and it was an easy hike close to home before we began our New Year’s festivities later in the evening. While driving to the wilderness study area boundary I stopped above a spot in the road with several snow-covered ledges. I was worried about having difficulty driving back up the ledges so we decided to park there, but then I noticed the left-rear tire on the Jeep was flat. We had stopped half a mile earlier and the tire was fine then, so apparently it was punctured very shortly before we parked. I thoroughly inspected the tire from the outside and couldn’t find the puncture, let alone any foreign objects. I quickly swapped that tire out with the spare and then we began to hike.

First flat tire of the day 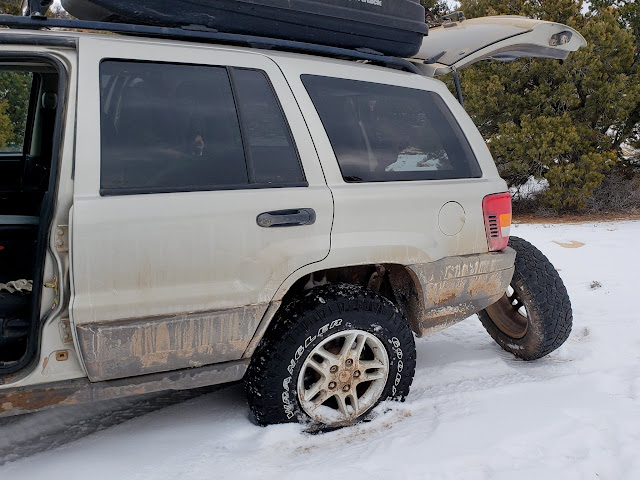 We walked down the road a distance before reaching a barricade that hadn’t been there the last two times I was in the area. In 2016 the BLM partnered up with the Wasatch Mountain Club to move the barricade from the WSA boundary farther back, which I’m not sure was even legal since the travel plan hasn’t been updated since 2008. The barricade has since been broken by some Emery County good ol’ boys and obviously people had been driving through it.

Footprints in the snow across Prickly Pear Flat 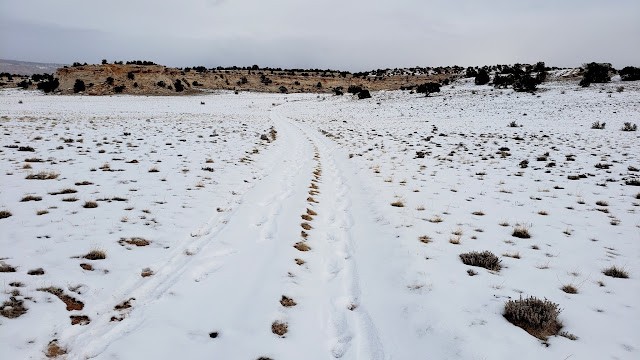 Gaiting in my gaiters 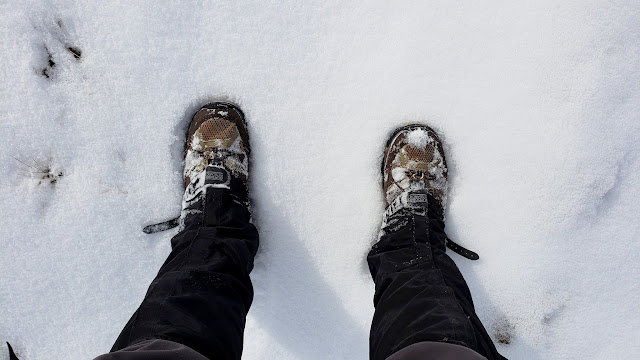 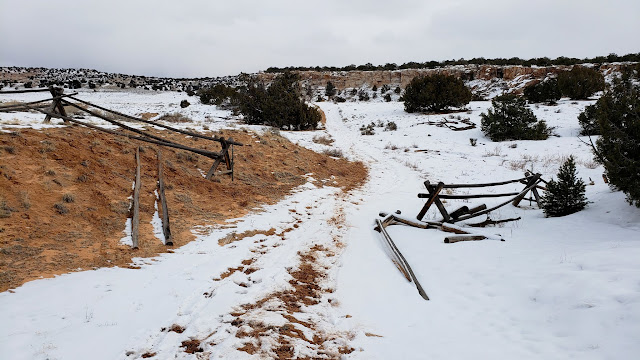 After dropping down through a cliff band it was a flat walk to the rock art. We saw a single bighorn sheep in the area but, not having my real camera on me, I didn’t get a decent photo of it. The rock art is amazing despite having been weathered so badly. Each time I come here I notice new details, such as the tiny bird figure next to the snake holder person.

Dropping down through a layer of cliffs 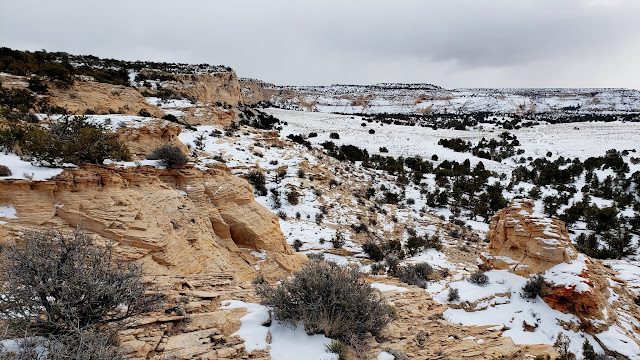 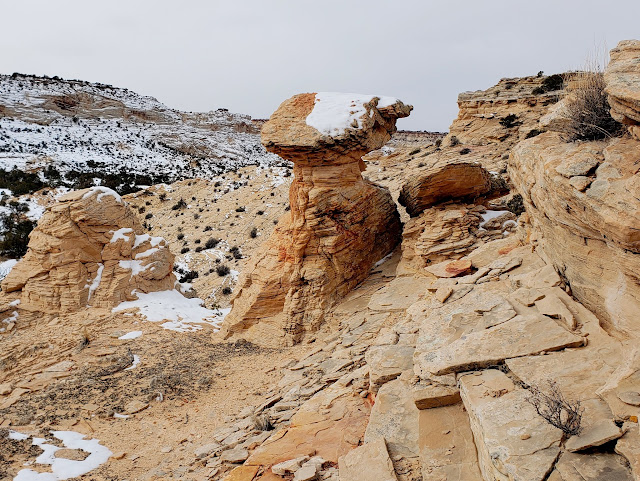 Chris above a small cliff 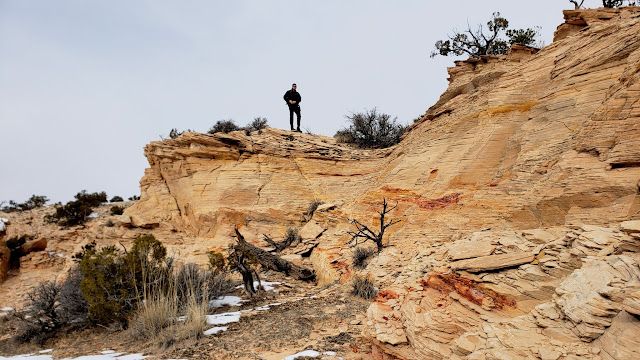 Walking toward the rock art 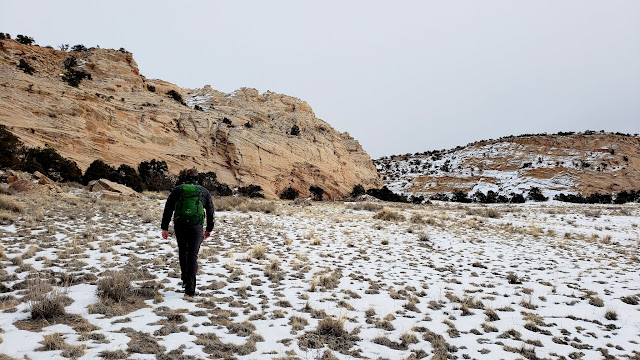 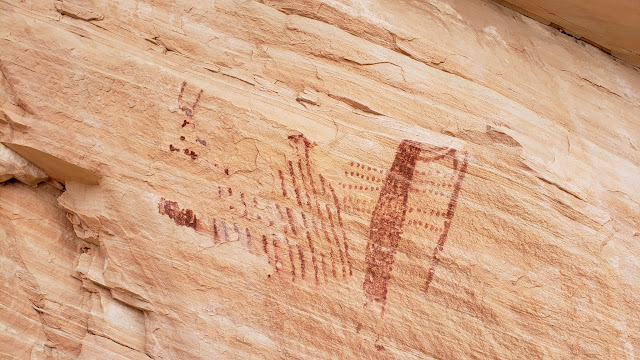 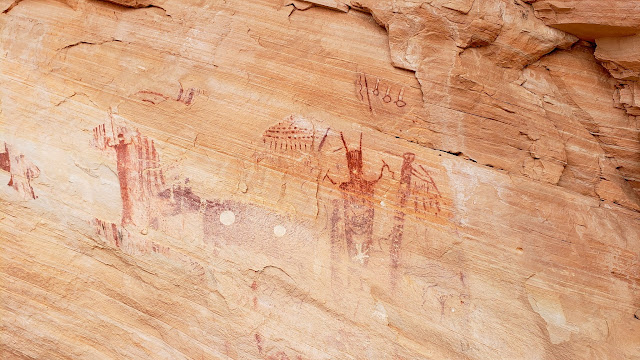 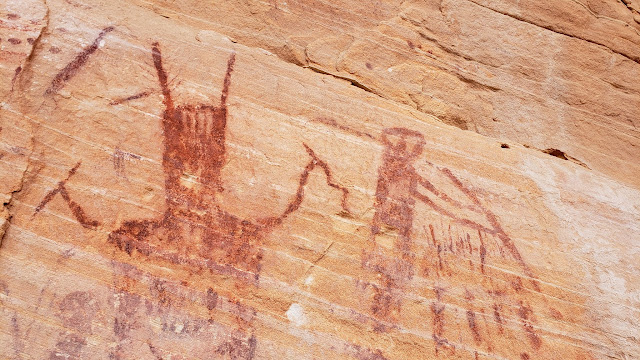 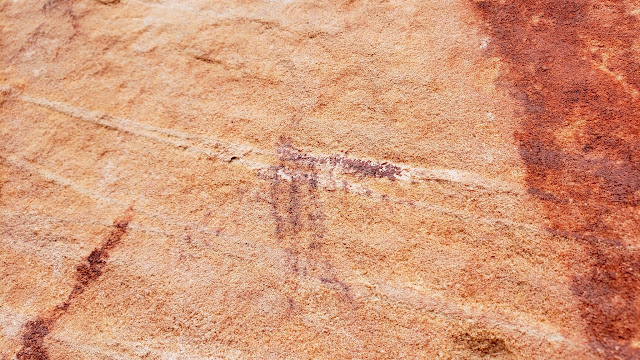 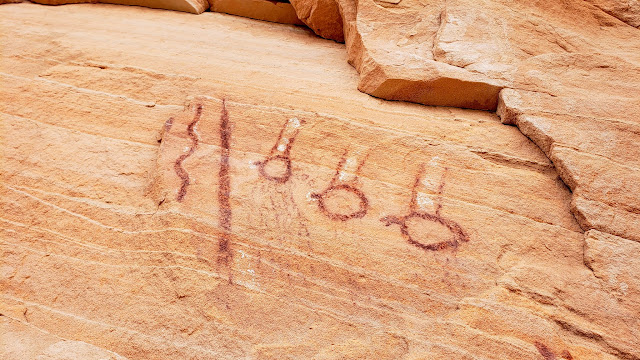 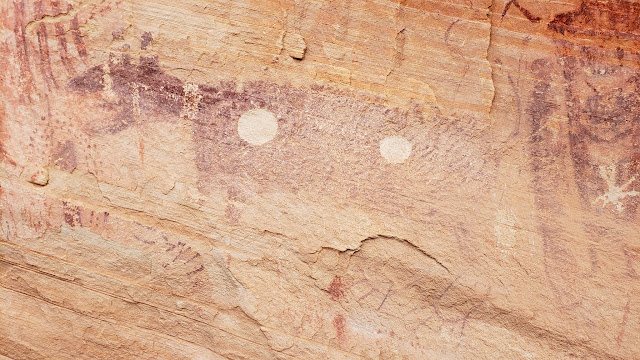 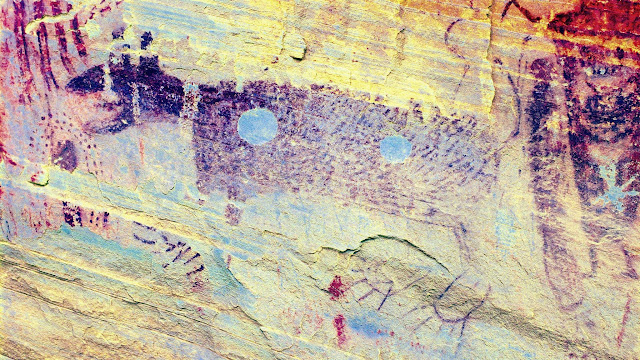 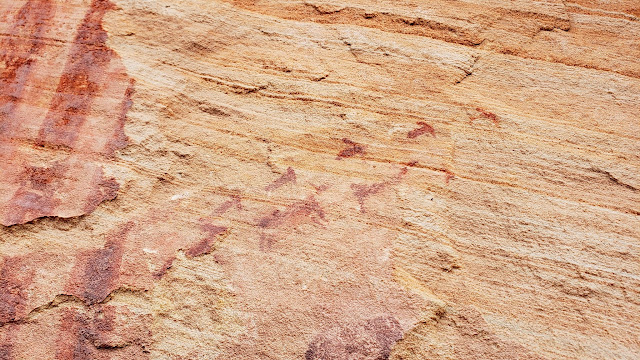 Chris climbing the ledges for a closer look 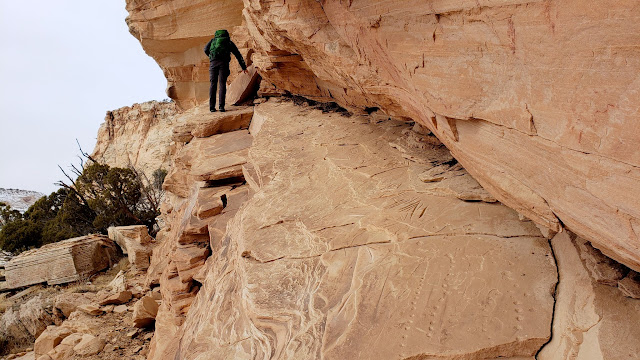 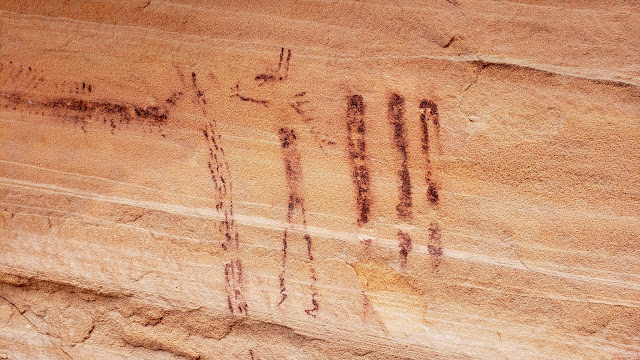 Bird and other figures 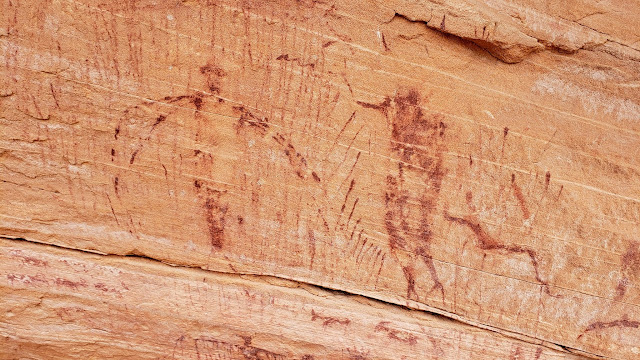 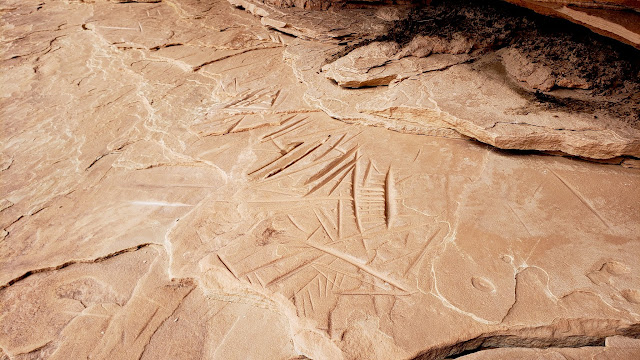 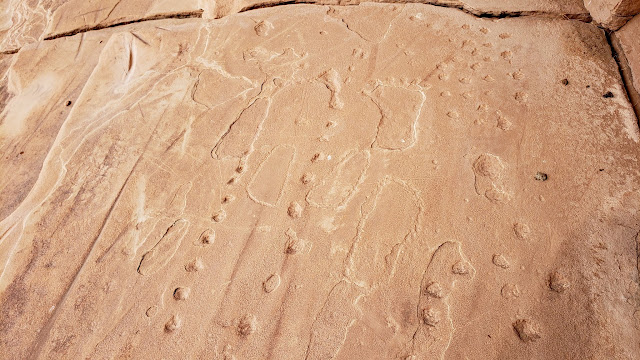 It began snowing as we left the rock art behind and took a different route back to the Jeep, one which I’d taken once before. This time I realized the route through the cliffs appeared to be a stock trail, possibly with some construction, but it was difficult to tell with it being covered in snow. We hiked down a wash and saw some presumably fake petroglyphs that I’d seen on my first trip there. I’d seen a photo online of other fakes in the area but was unable to locate them. We followed the wash back to the road and then it was a short walk to the Jeep.

Climbing a trail through the ledges 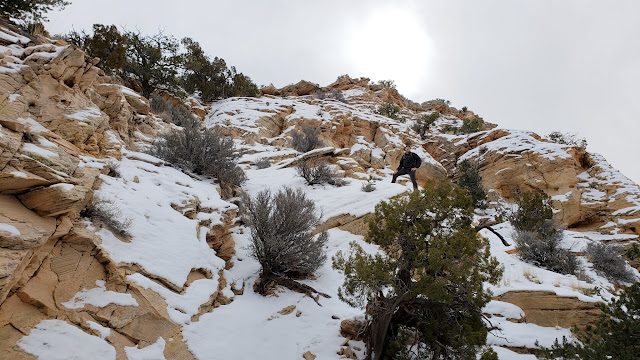 Descending into the head of a wash 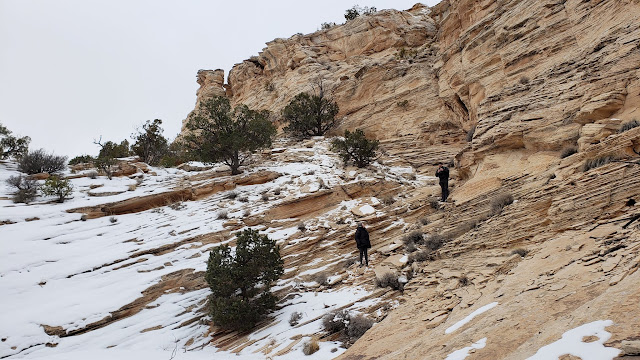 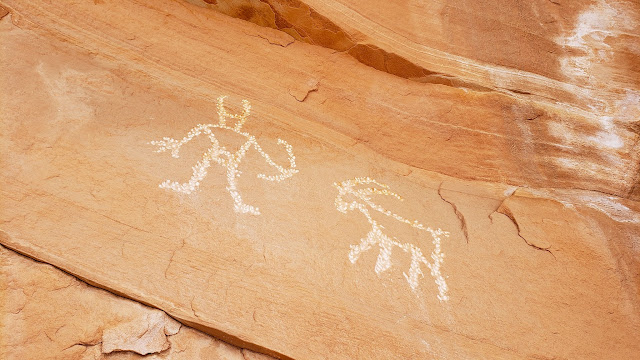 Hiking down a wash in the snow 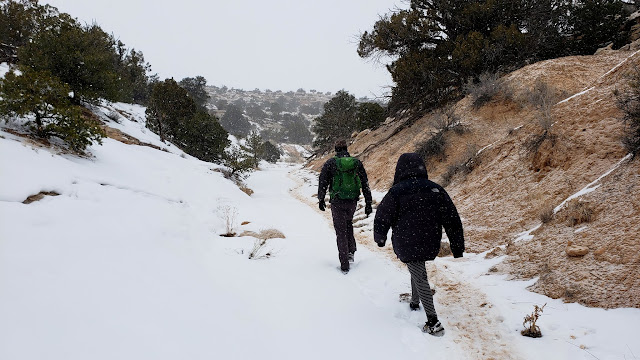 When we were almost back to Cleveland during the drive home, the Jeep started to handle strangely and I pulled over to check the tires. Once again, the left-rear was almost flat! It gave me a chance to use a tire plug for the first time–it was tough! With the tire mostly flat it was difficult to insert the needle and plug because the tire kept flexing inward toward the rim. After repositioning my body so I could push forward with my feet I managed to get a plug in the tire. The compressor inflated the tire to 25 PSI before it blew a fuse in the Jeep. I didn’t have any spare mini-blade fuses (I’d never blown a fuse in almost seven years of owning a Grand Cherokee) and didn’t want to borrow one from another circuit, so we just drove home like that and everything was fine. The tire held air for a couple of days before I could get them both repaired professionally. I never did find whatever punctured the spare tire either, so I’ll never know what caused two flats in the same day. 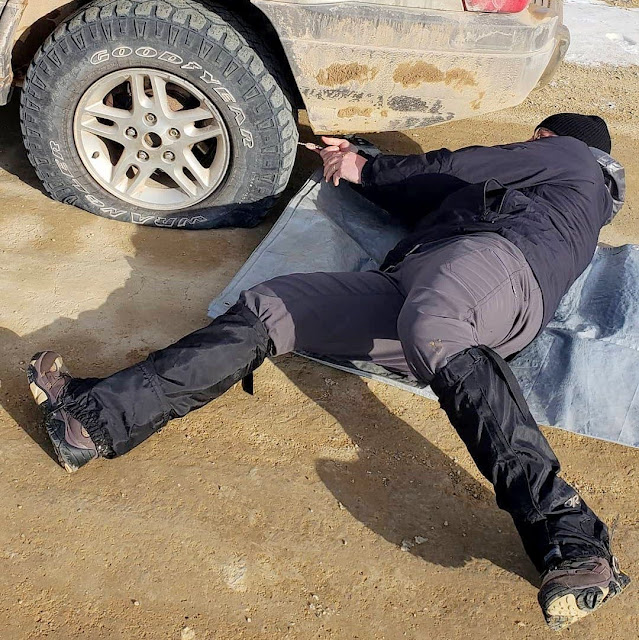 Plug in the spare tire 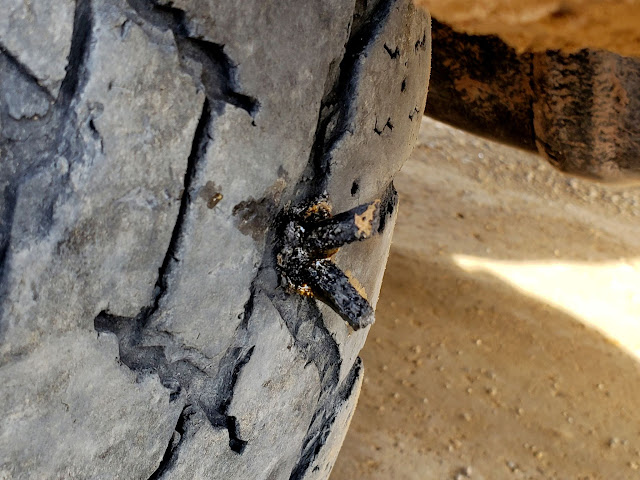 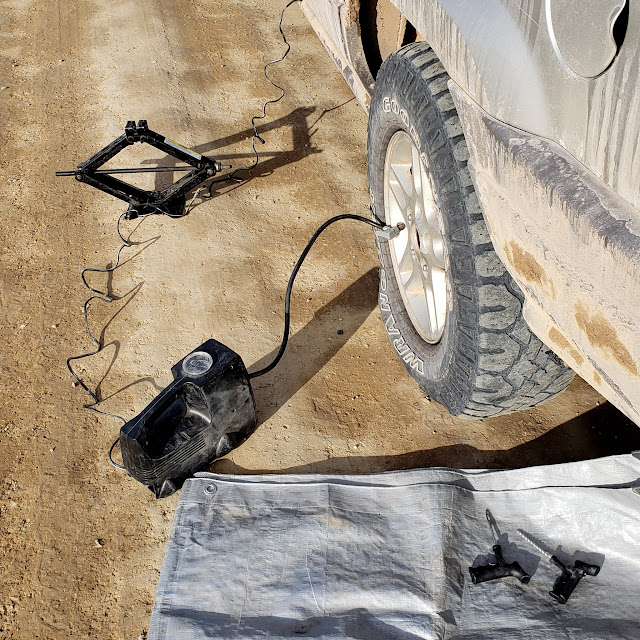