After spending the day exploring Utah’s West Desert by myself, I met up with my friend Jim and hiked Notch Peak. We had planned this trip in March at a geocaching event in St. George, but I’d forgotten about it until Jim attended the San Rafael Swell geocaching event in October. Two weeks after that get-together, we met up at the Notch Peak Trailhead and started the eight mile hike round-trip to Notch Peak. We met up shortly after sunrise and started hiking up Sawtooth Canyon. Jim had his GoPro running for most of the day and put together this great video of our hike. After a short distance we took a turn up a side canyon from Sawtooth Canyon and ascended it nearly all the way to Notch Peak. The lower canyon was wide and gravelly with some easy hiking, but higher up it became choked with brush with several ledges to climb.

Waiting for Jim before sunup 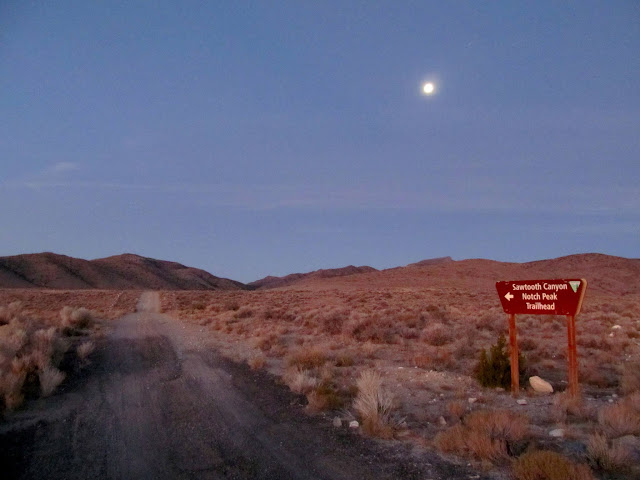 Jim at the Notch Peak trailhead 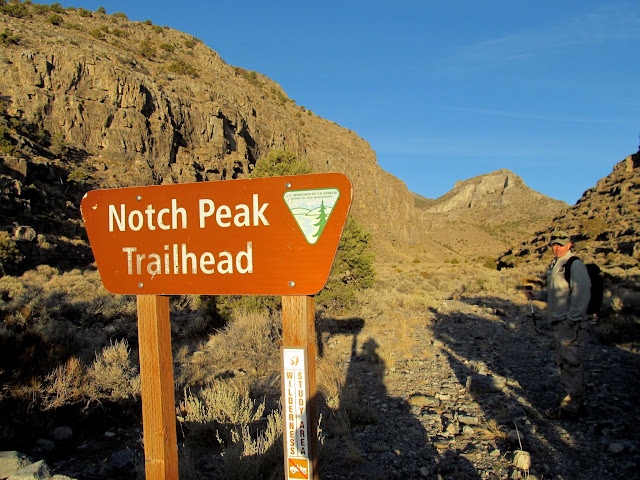 Entering the side canyon leading to Notch Peak 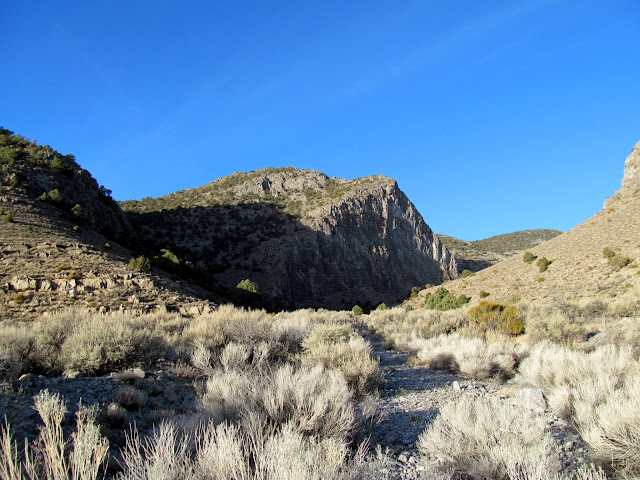 Jim in the lower side canyon 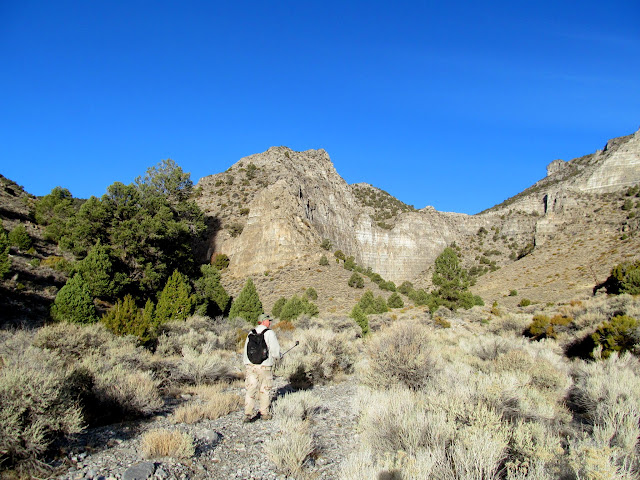 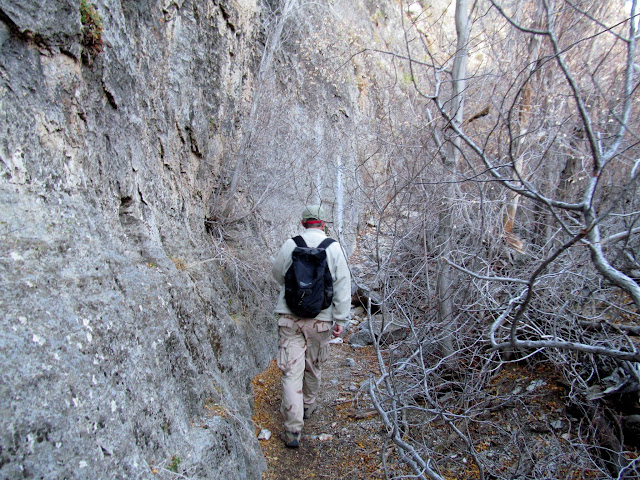 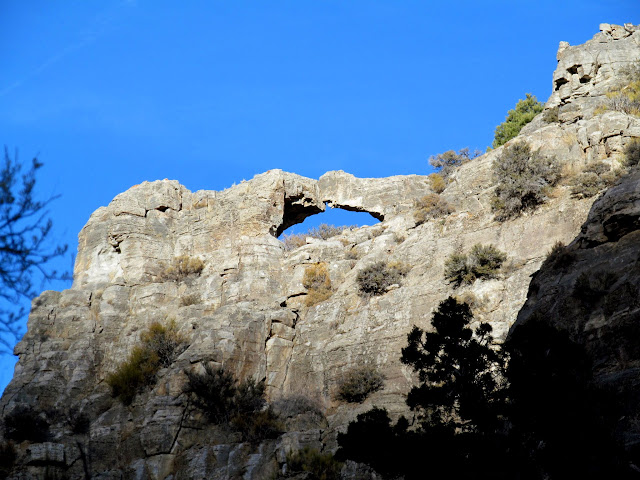 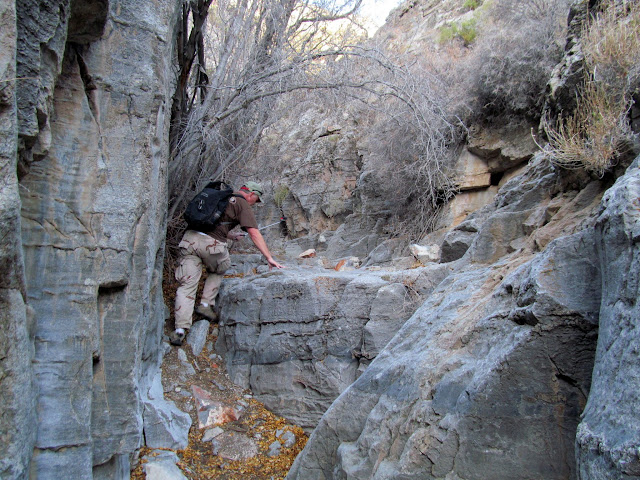 First snow of the season! 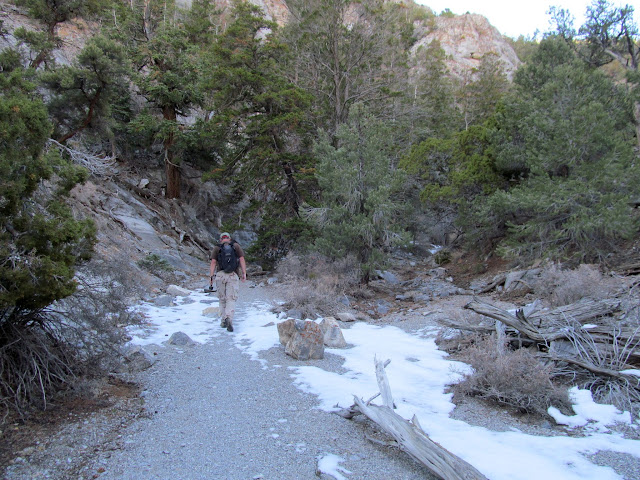 Climbing the upper side canyon 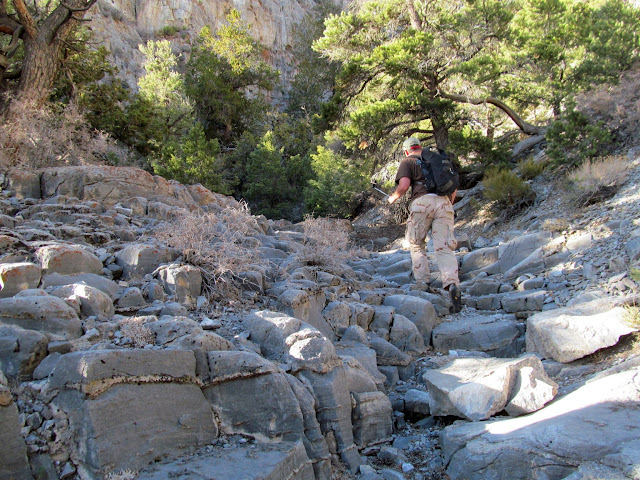 Huge fallen tree across the canyon 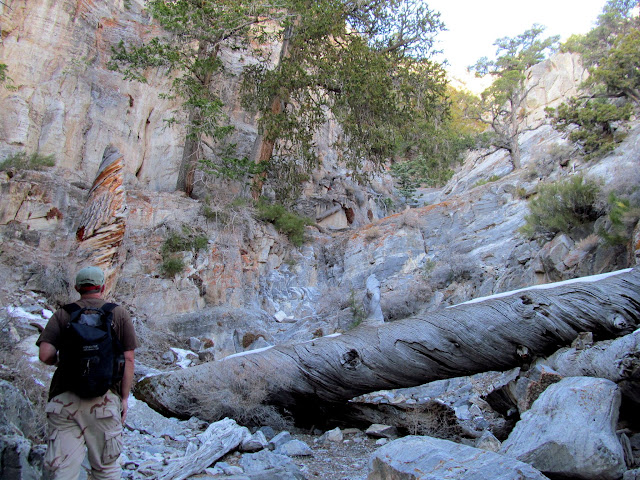 We reached a series of dryfalls that were too difficult to climb, but found a trail that bypassed them easily on the right side. Eventually we had climbed high enough to have nice views of the country to the south where I’d spent much of the previous day. Jim and I climbed to the saddle between Notch Peak and Sawtooth Mountain that forms the “notch” for which the peak is named. We had our first view from there to the west into upper Tule Valley and farther into Nevada. 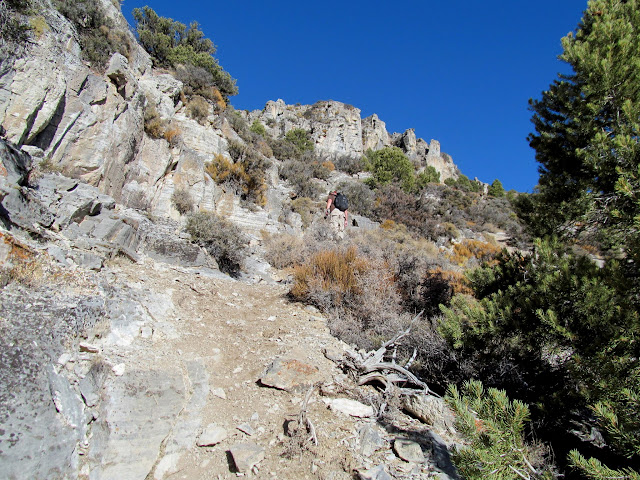 View down the side canyon 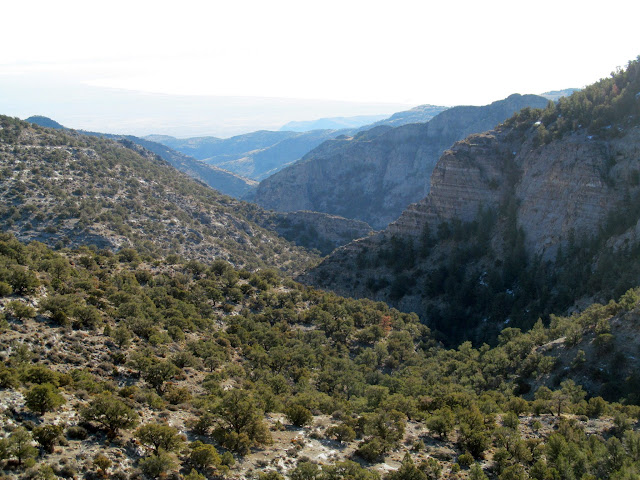 Walking below some interesting cliffs 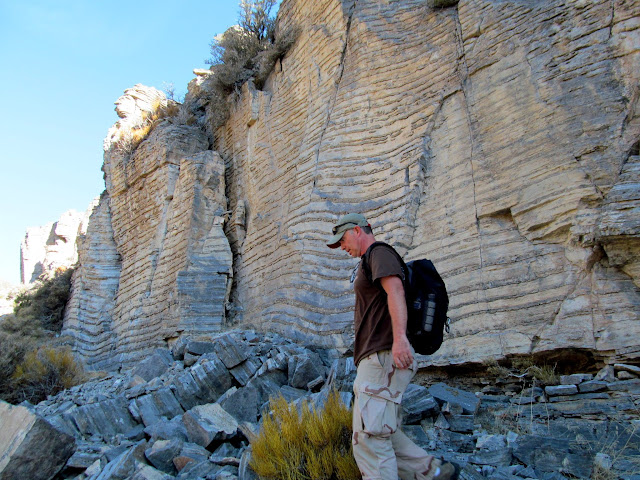 View toward the Notch saddle 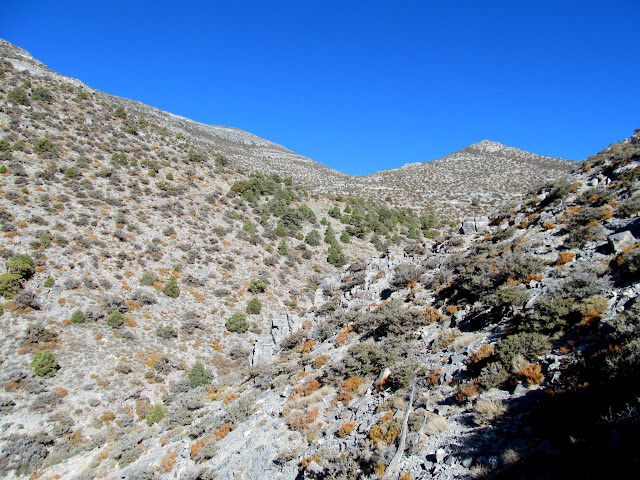 Tule Valley Hardpan to the south 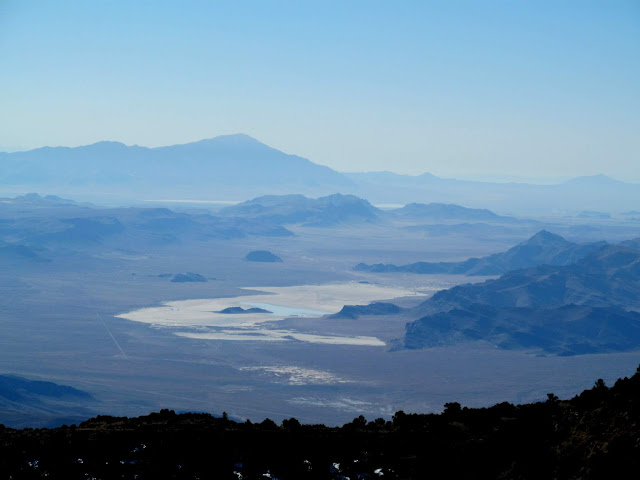 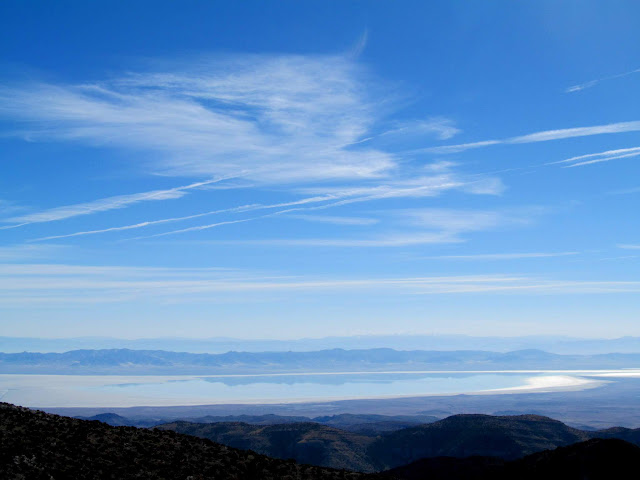 Almost to the saddle 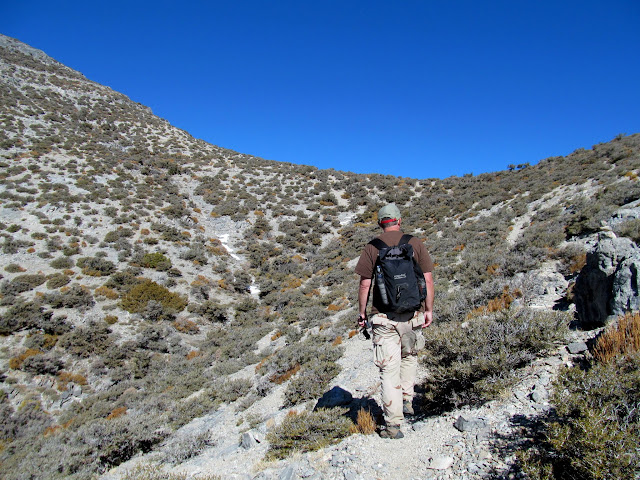 View west from the Notch

We climbed the last 400′ of elevation from the saddle up to Notch Peak, where there wasn’t much of a trail. There were several routes that switched back up the mountain and we each took our own path. Jim reached the summit shortly ahead of me. First we found a geocache just beyond the summit, then signed the summit register (which was a hilarious Star Trek: The Next Generation “Personal Log” book), and then rested for a while before beginning the descent. 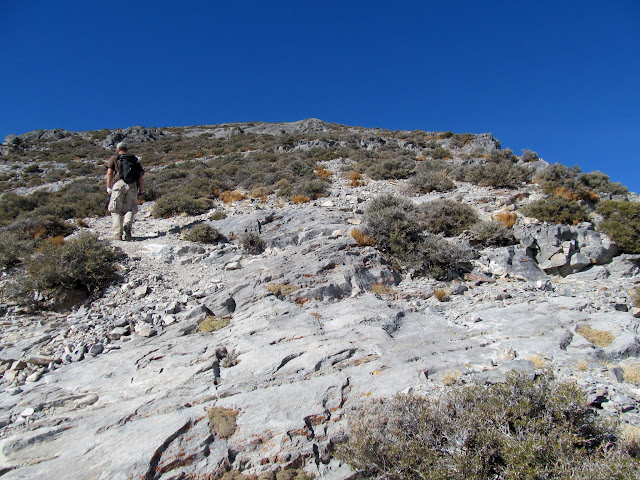 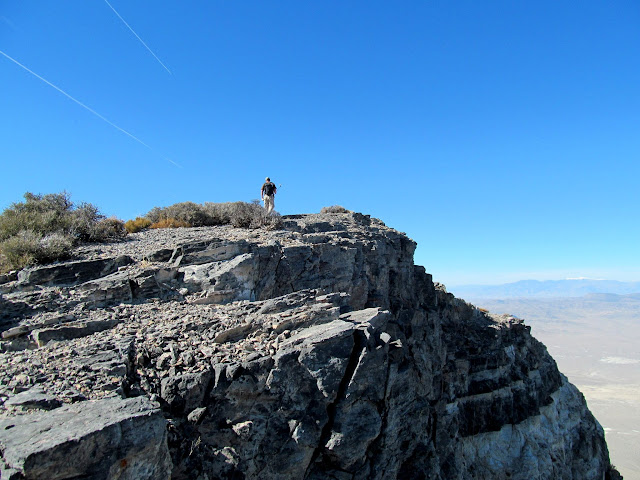 Cairn on top of Notch Peak 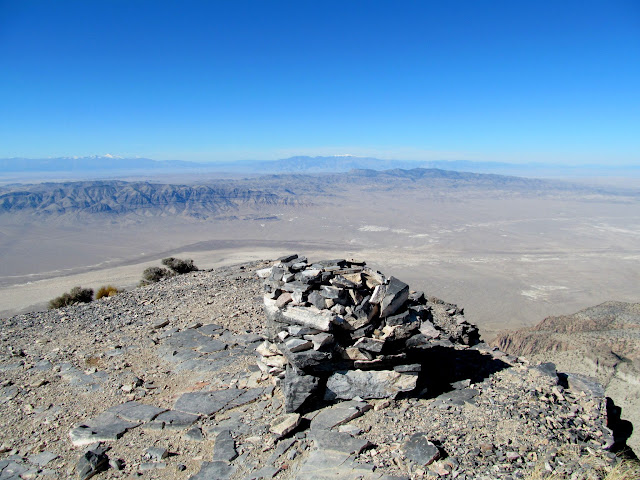 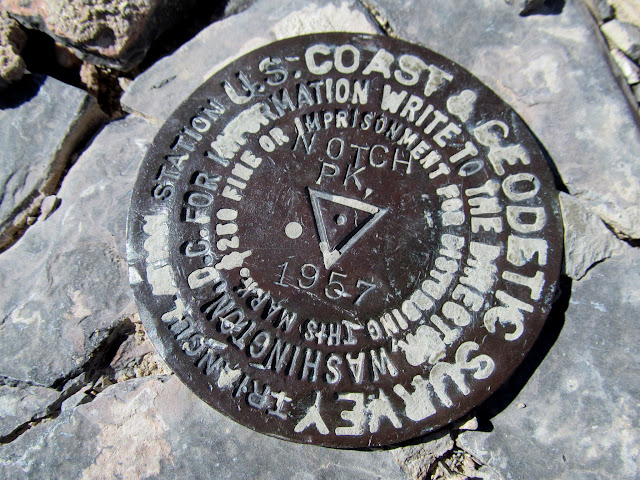 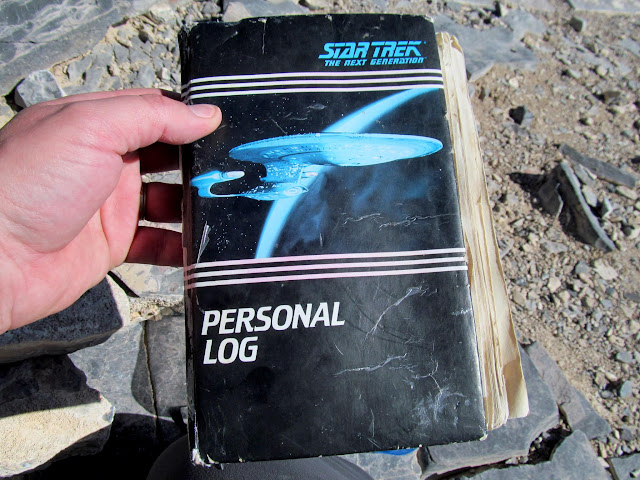 View west from Notch Peak across Tule Valley and into Nevada 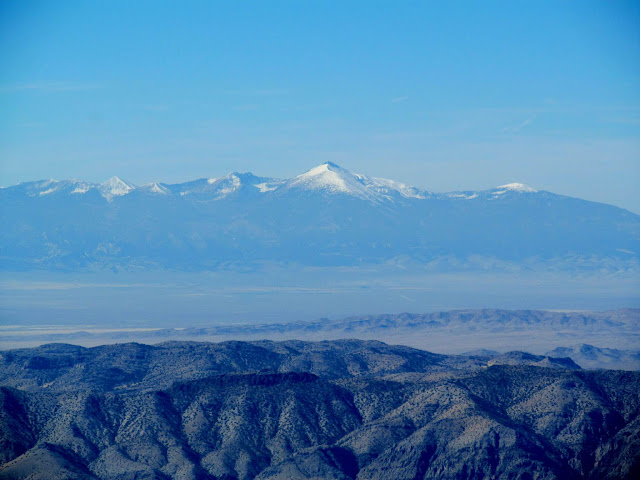 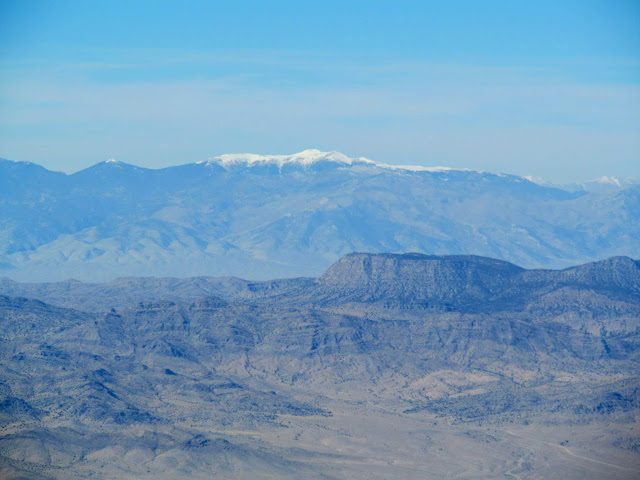 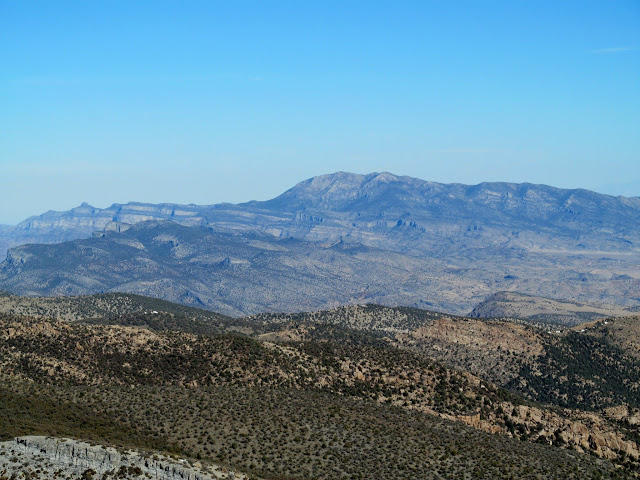 The climb up to Notch Peak seemed to go by quickly, but the descent took forever. Occasionally we’d reluctantly check our GPS units and were disappointed each time to see how far we had left before reaching the trailhead. We got back to my Jeep and I drove Jim to where he’d left his Jeep a few miles down the road. I then followed him into Delta. Jim was very low on fuel and wasn’t sure he’d make it into town! He barely made it there and stopped at the first gas station he encountered, and I pulled in behind him to say our goodbyes. Then I drove farther into town to top off my fuel before making the drive home. I’d had a wonderful couple of days in the West Desert, topped off (pun intended) with a classic Utah peak in the bag.

Dead tree on the descent from Notch 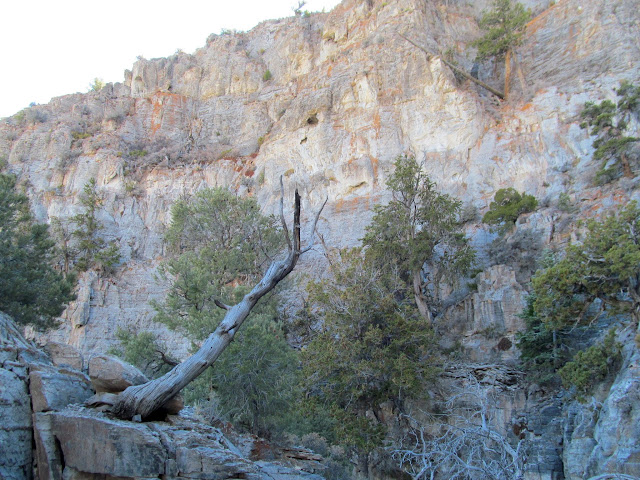 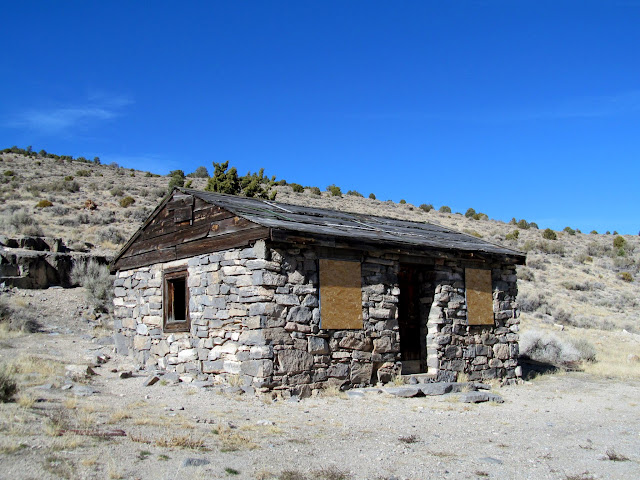