For our annual first-weekend-in-March trip to Utah’s Dixie, Traci and I stayed on the 40th floor of the Casa de Cresta (actually Paul and Pam’s house on a bluff 400′ above the Virgin River). We arrived on Thursday evening and, with our wonderful hosts and other friends, enjoyed some dinner, drinks, and shenanigans.

Dennis shouldn't have agreed to having the shock collar turned all the way up.


On Friday a few of us went for a short hike on the mesa between Cottonwood Wash and the Virgin River, where in Google Earth I’d spotted some unusual circles that I thought might be pit houses. I drove as close as I could in the Jeep and then Paul, Chris, and I walked another half a mile to the end of the ridge. There was a stone circle with a cross inside, and some fairly bulky rock walls whose purpose I couldn’t determine. I saw no lithic flakes or potsherds anywhere on the mesa so I’m doubtful the walls are Indian in origin (the cross certainly is not). After our short outing we returned to base camp and made a water balloon launcher. We spent a couple of hours on R&D but still couldn’t hit the walking path below the back yard. 😀

On a ridge above the Virgin River 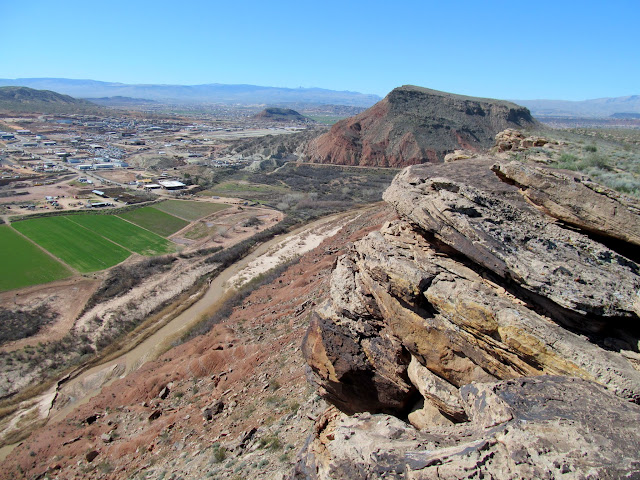 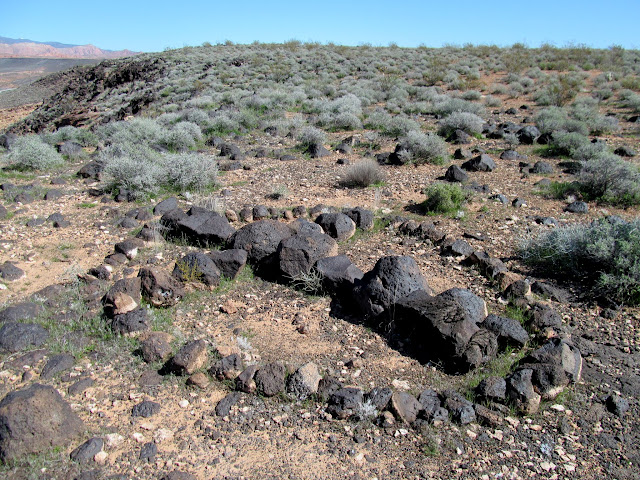 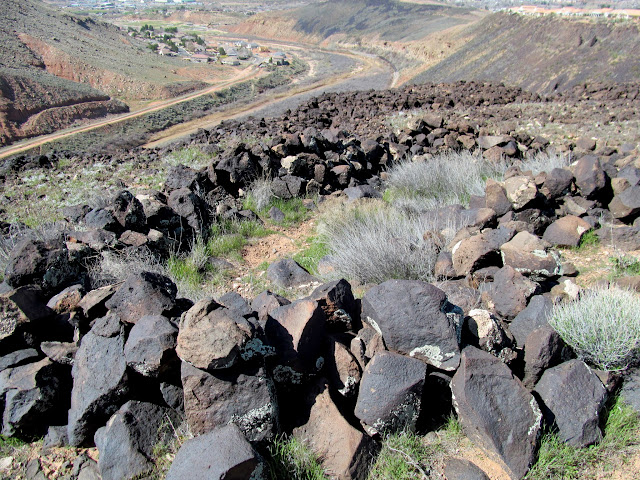 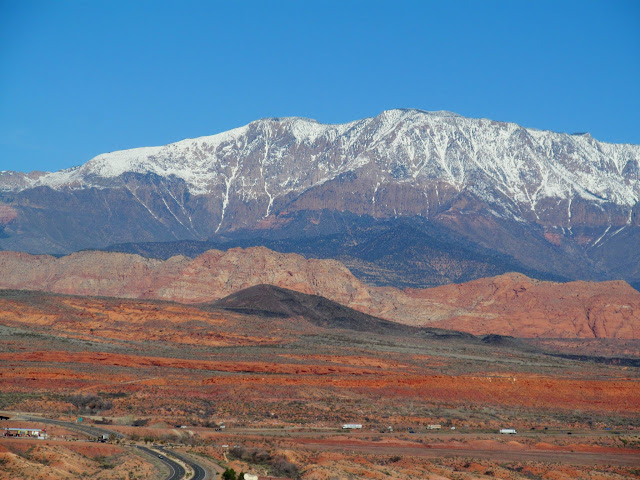 Paul taking in the view 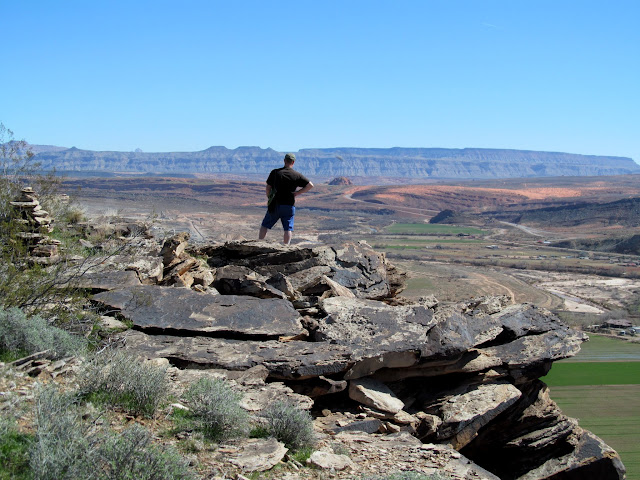 
The annual geocaching event in St. George is what originally drew Traci and I to the area on our first trip in 2006, but now we return each year to see the friends we’ve made through the years. We did attend the event on Saturday morning and got to hang out with a few friends who we have missed, but the highlight is always the “after party.” This year’s post-event activity was a drive near Gunlock to see some petroglyphs in the Naming Cave. We had five Jeeps and 11 people along for the ride. The drive there wasn’t particularly gnarly, but with some steep ups-and-downs I had the Jeep in 4-low once we left the graded dirt road. The parking area at the Naming Cave had a group of UTVs there when we arrived, so we shared the area with several other people for a while. Only a few of us made the climb up to the cave. I didn’t find it at all difficult or sketchy, but some from the UTV group had set up a rope to use as a handline after we climbed back down. Chris, Ken, and I scrambled and hiked around the area looking for anything else of interest, then we all moved down the road and found an out-of-the-way lunch spot.

Climbing up to the Naming Cave 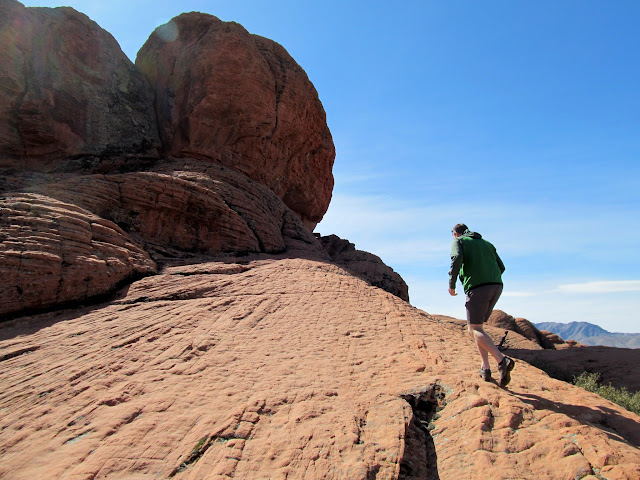 Climbing down into the Naming Cave 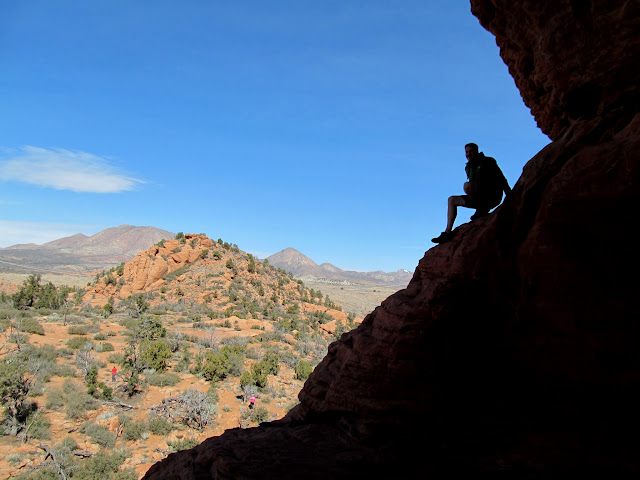 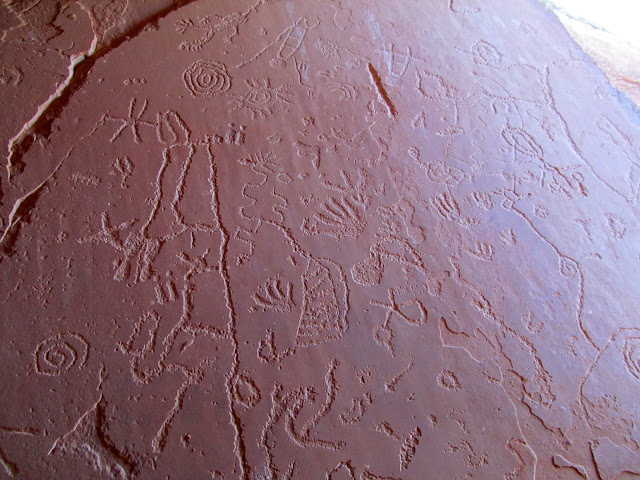 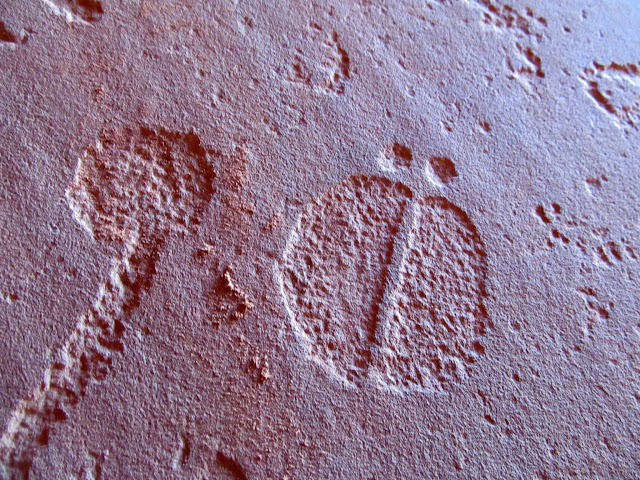 Ken in the Naming Cave 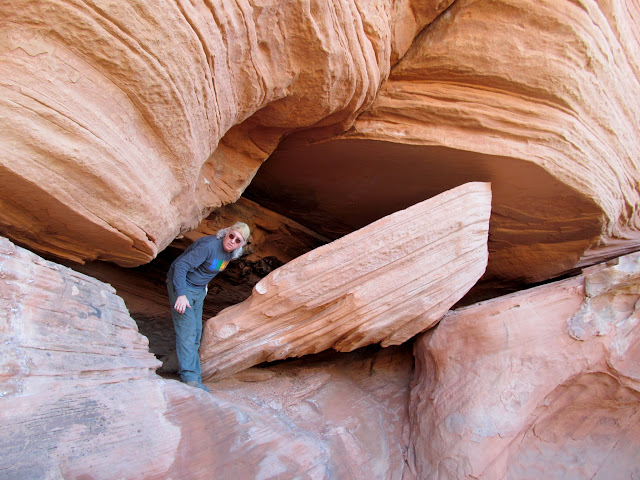 Scrambling around on the sandstone 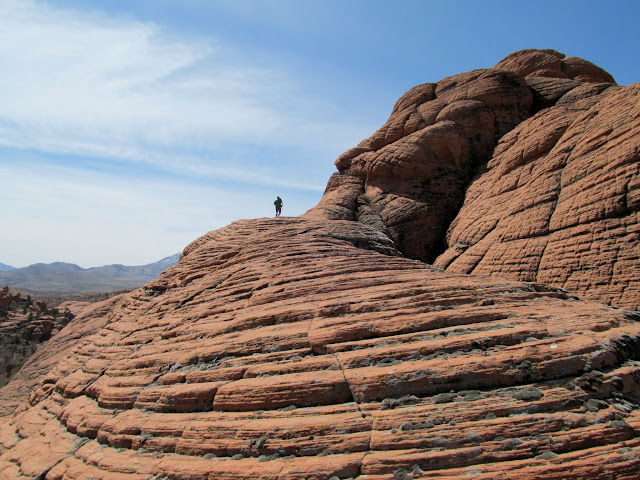 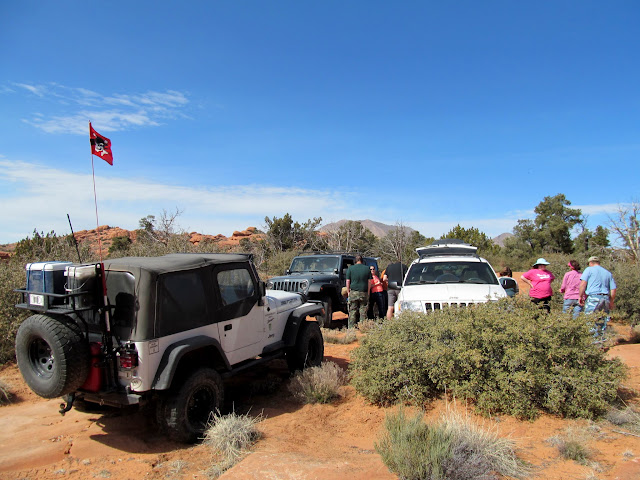 We finished the afternoon by finding a couple of geocaches nearby, one of which had only been found once in nearly three years. That one involved some bushwhacking and scrambling but was a fun time. We retired back to Paul & Pam’s place and I was a little dismayed when Paul said, “Hey, you guys wanna play cornhole?” I was relieved to learn that cornhole is just a bean bag toss game and we had a roaring great time playing it. Chris and I also walked down the street to the edge of the mesa and took some night photos of Washington.

Scrambling up to find a geocache 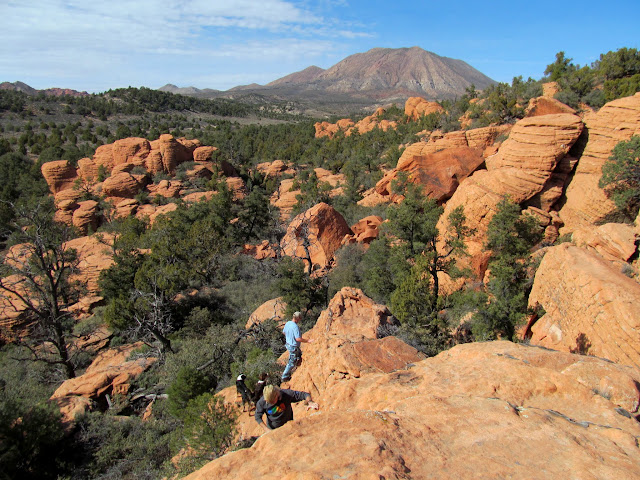 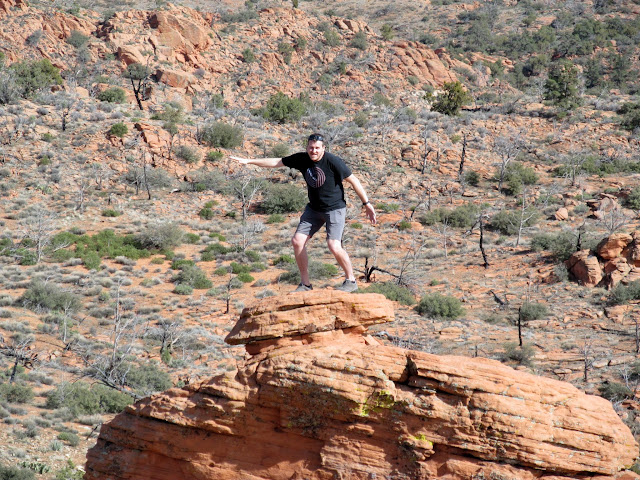 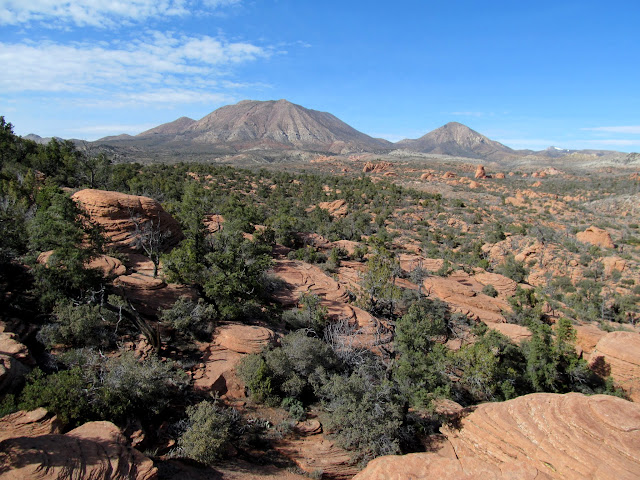 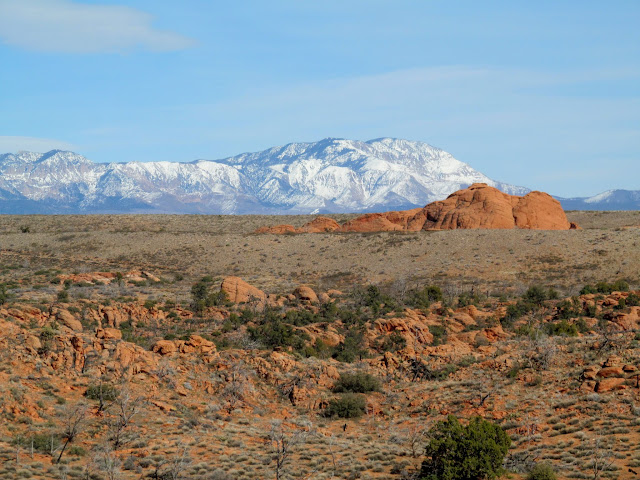 Blasted out room at Cole Spring 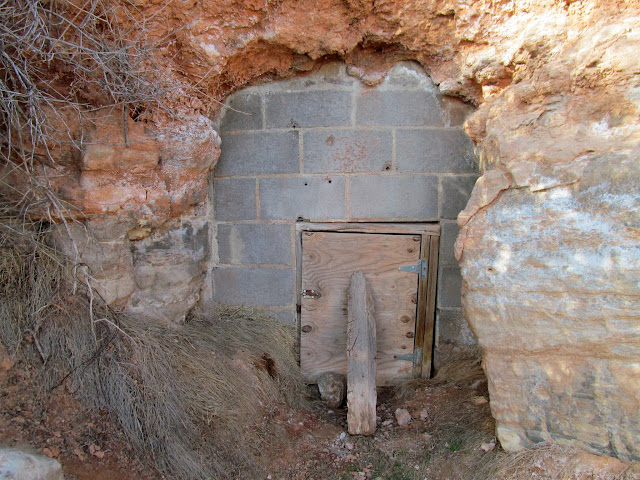 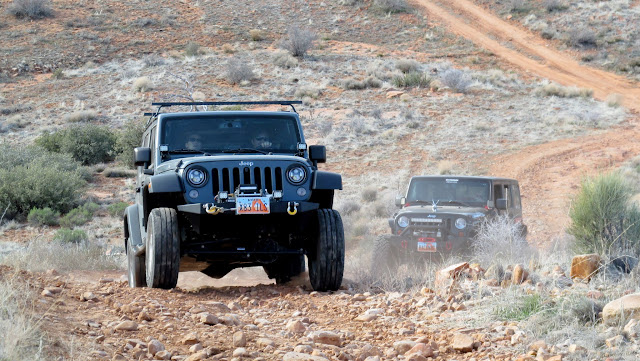 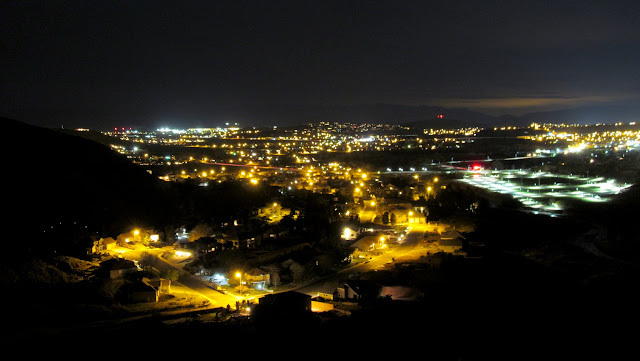 Sunday was a drag, as usual, with Traci and I having to head home. We said our goodbyes to friends after breakfast and headed toward Zion National Park with Chris following behind. We dropped Chris’ car off in Springdale and took the Jeep into Zion. I hadn’t done any planning for this area so we simply made a leisurely sightseeing drive on Highway 9 with a few stops. The first was at the Canyon Overlook trail, which we hiked to its end overlooking Pine Creek. Chris and I also hiked up Keyhole Canyon a short distance and saw some bighorn sheep who were obviously used to tourists. The drive home was uneventful and, for once, we didn’t run snow over any of the mountain passes. Traci and I arrived at home to find that the dogs were still alive and the kids hadn’t burned down the house–in all, a successful weekend! 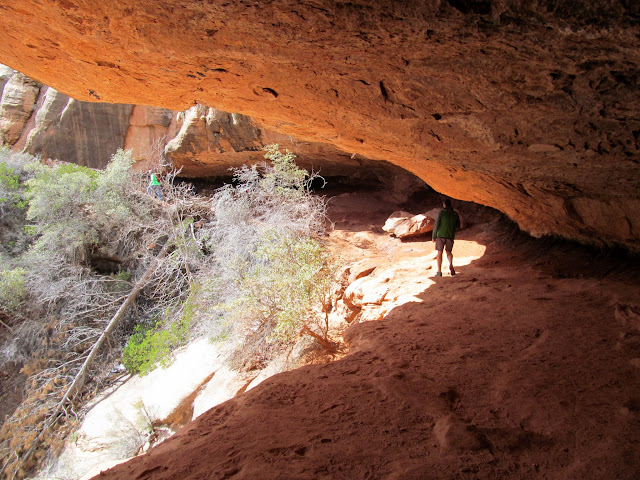 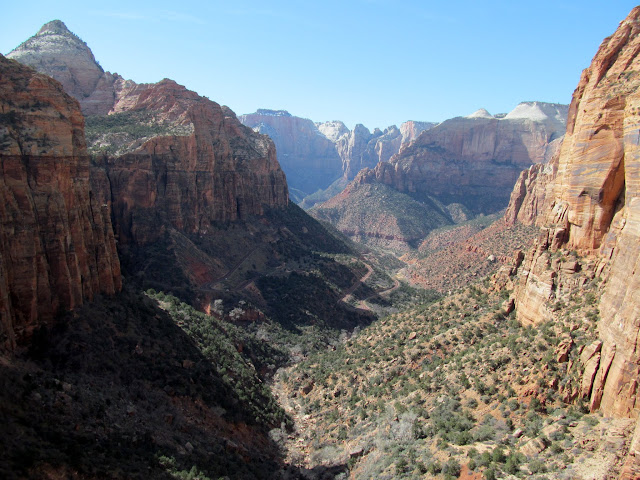 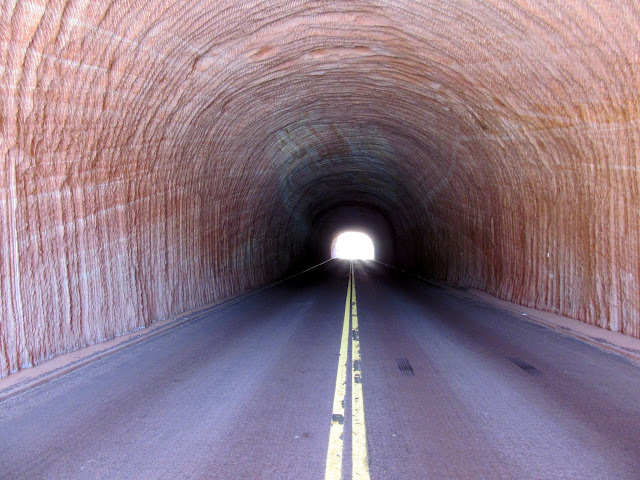 Tree on a sandstone knoll 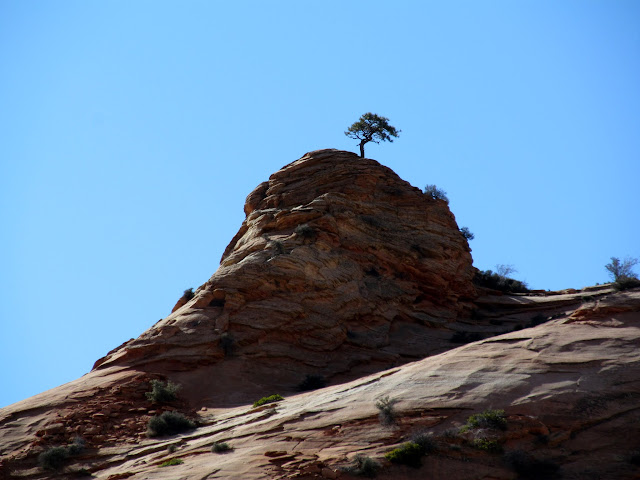 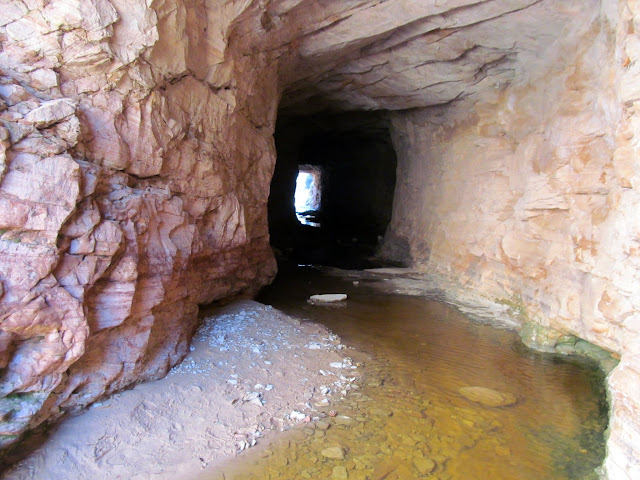 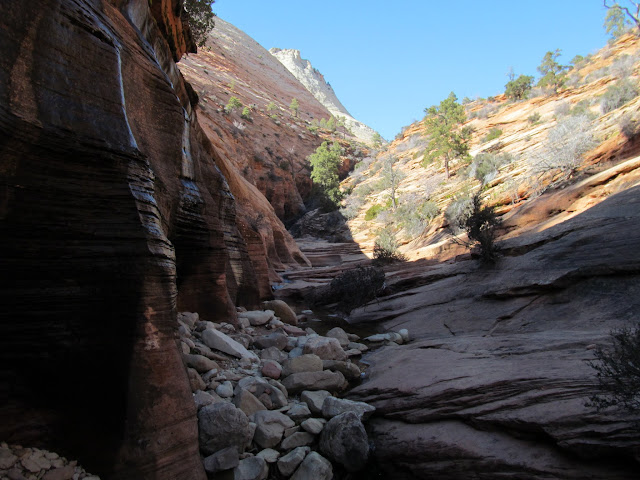 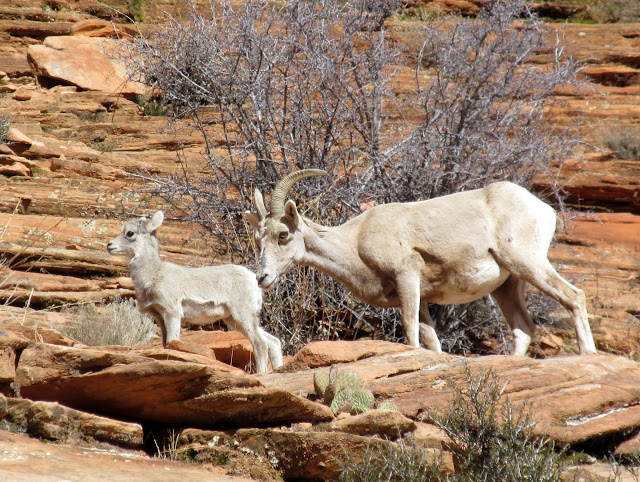 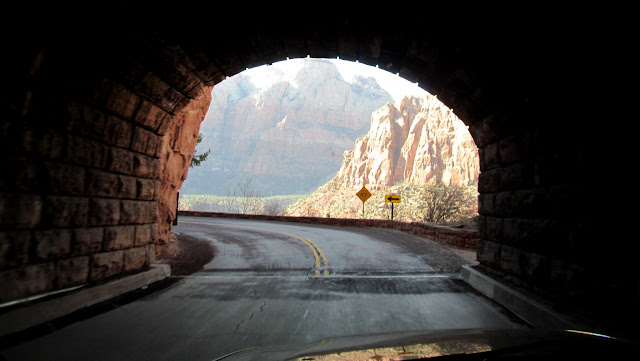