Another day of chasing long-dead cowboys was prefaced with a little correspondence and research. Alan had heard from a couple of his cowboy friends about a large brush corral, built by Preston Nutter in the very early 1900s, in a fork of Turtle Canyon, and e-mailed me and a few others for help in locating it in Google Earth. I was able to locate it based on his description and we made plans to ride out there and hike to the corral. A stock trail was supposed to follow the canyon up over a ridge and down into Trail Canyon, which is a small part of a larger route used to move cattle from Range Creek to the Price River and eventually to Woodside for loading onto rail cars. I initially couldn’t find any sign of the trail leaving the fork of Turtle Canyon in the satellite imagery. On the evening before our trip, as I was looking at the map in my GPS to ensure my waypoints got uploaded correctly, I saw that the topo map in the unit showed a trail climbing out one side of the canyon near its mouth rather than out of the head of the canyon like I’d expected. I fired up Google Earth again and this time I saw indications of the trail. Now we knew where to look for it on the ground!

Satellite imagery with arrows pointing to the brush fences 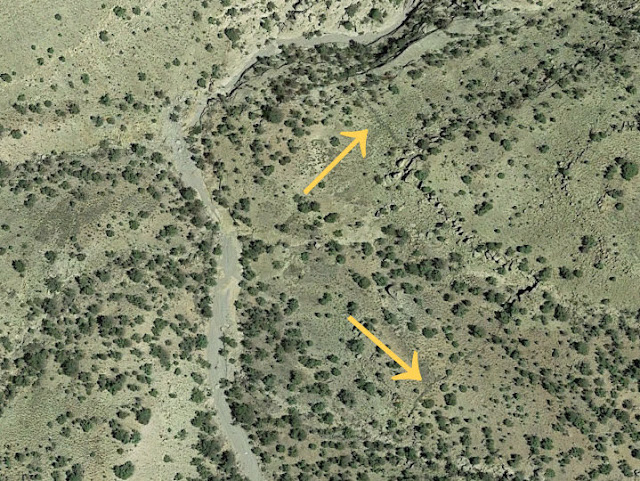 It was chilly at 8AM on Friday when five of us met at the old mine in Horse Canyon. We bundled up in layers and began the 22-mile ride up over Little Park and into Turtle Canyon, with a few scenic stops along the way. During the descent into Turtle my motorcycle drifted over into a rut filled with big rocks and I panicked and grabbed the front brake too hard, immediately dropping the bike to the ground while my body kept going and rolled down the road. Luckily I had only been doing somewhere between 10 and 15 miles per hour, and both myself and the motorcycle were mostly unharmed–each just suffered a few scrapes.

Staging area at the Horse Canyon mine 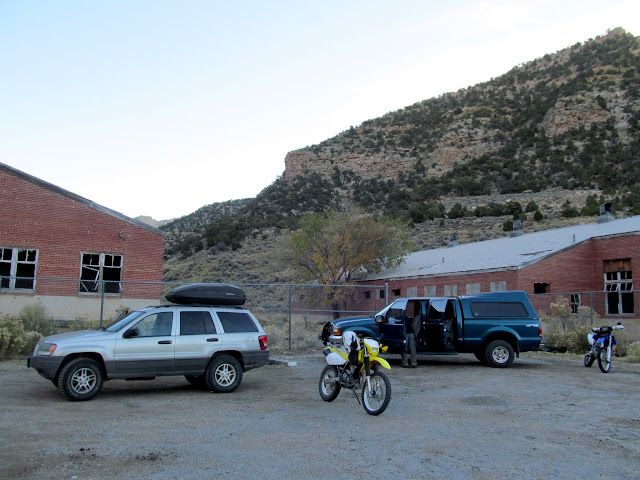 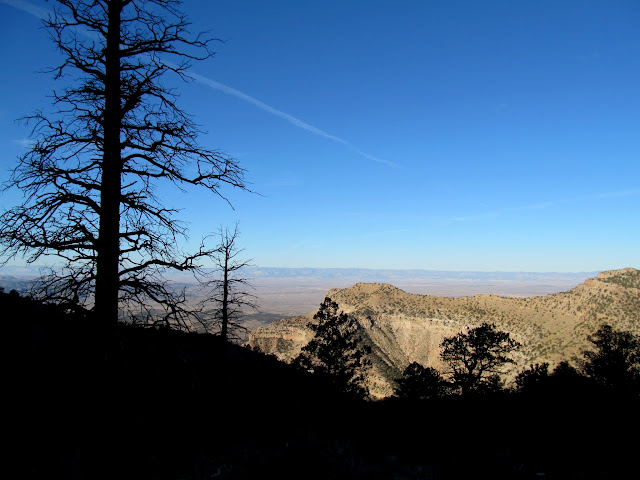 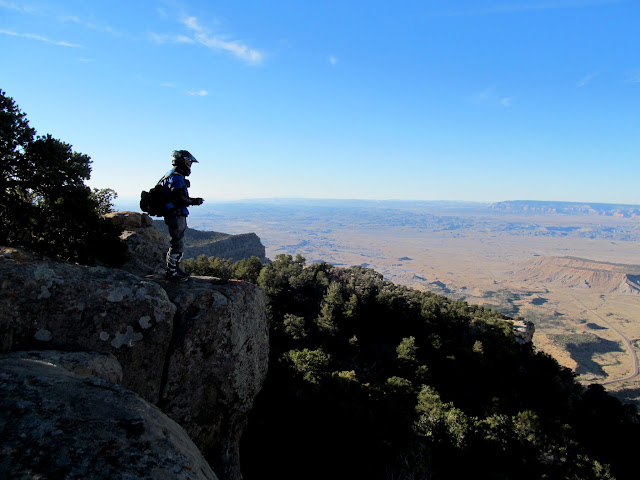 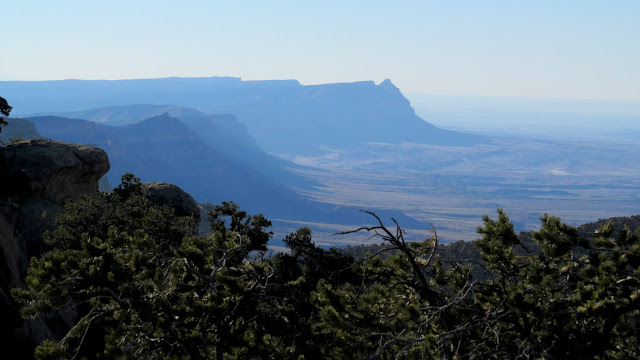 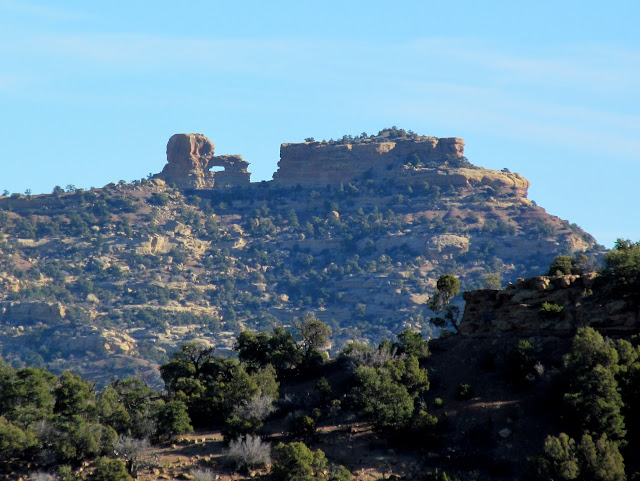 We found a spot to park near where we thought the stock trail might begin. Immediately after starting to hike we found the trail and a couple of cairns. The trail was mostly easy to follow despite decades of disuse. Todd left the trail to explore some cliffs above and found a wonderful inscription near an old cowboy campsite. Alan had the knowledge to decipher the inscription for us. It was left by Joe Wing in 1887, possibly indicating seven miles to Range Valley (which is now called Range Creek). Joe was an early settler of Range Creek and manager of the Range Valley Cattle Company. Here’s some brief further reading: The History of Range Creek 1885 – 2001 and Joe Wing’s Grandson Visits Range Creek.

Cairn at the lower end of the Wing Trail 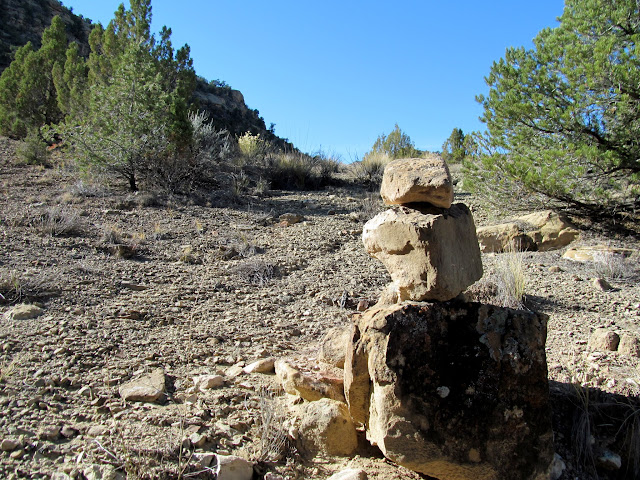 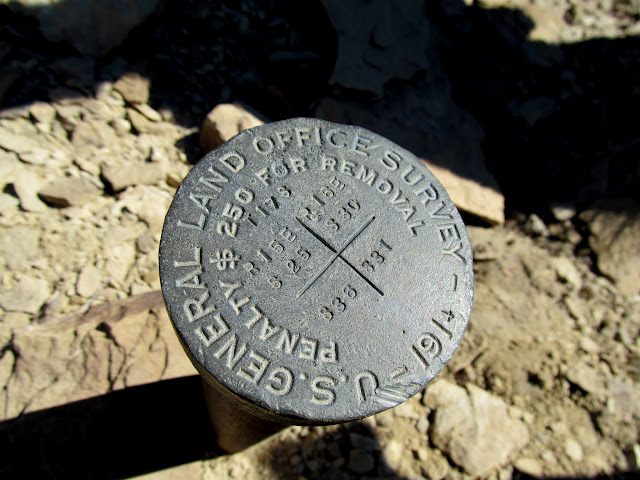 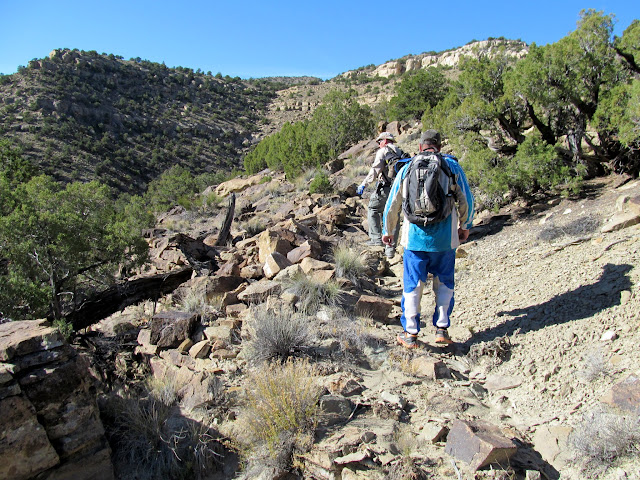 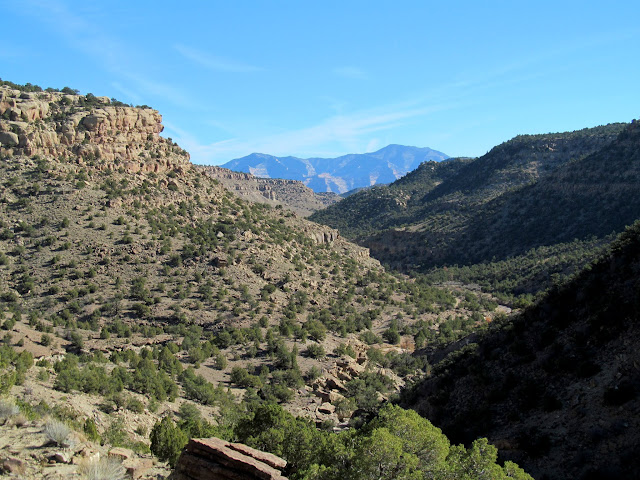 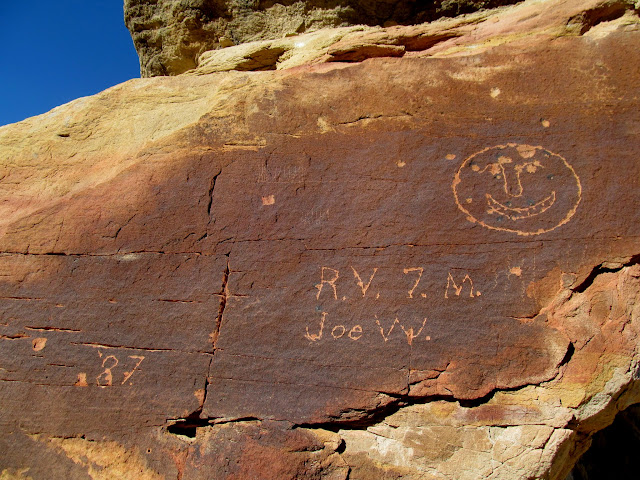 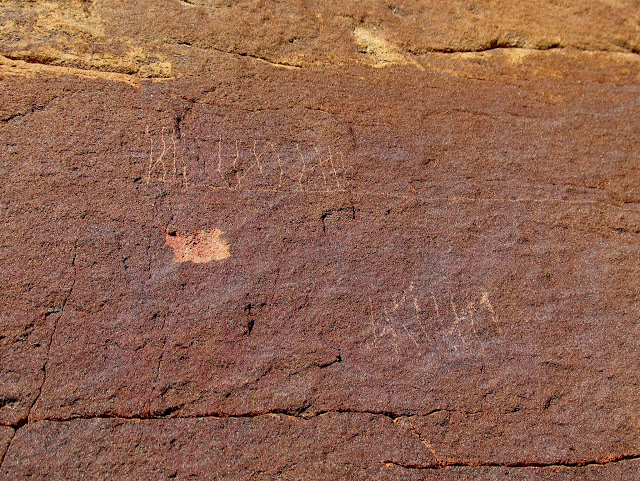 Beyond the campsite and inscription, the trail climbed above a few low cliff bands. Enormous amounts of rocks were stacked, and fill dirt added, to facilitate a trail over the ledges, though much of the dirt has washed away and to take a horse up the trail now would be very difficult. The group found a few old cans and bottles along the trail, including a broken beer bottle that is at least 112 years old! The trail topped out on a ridge which, lower down, is called Big Horn Benches. We followed the trail as far as an old, now-closed, bulldozed road before heading back down a short distance and breaking for lunch.

Rock wall built to support the trail over some ledges 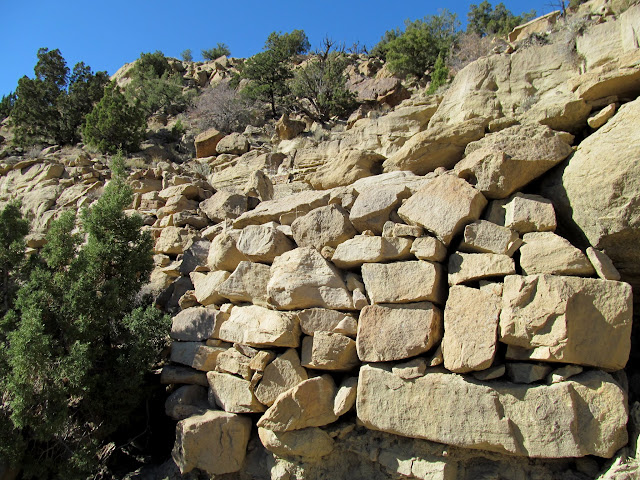 Trail above the ledges 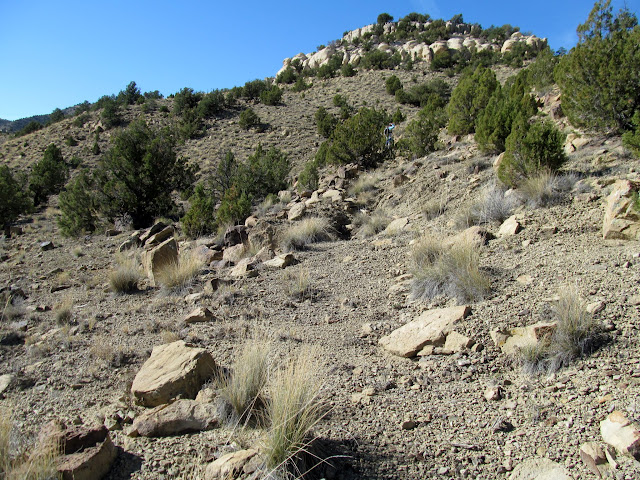 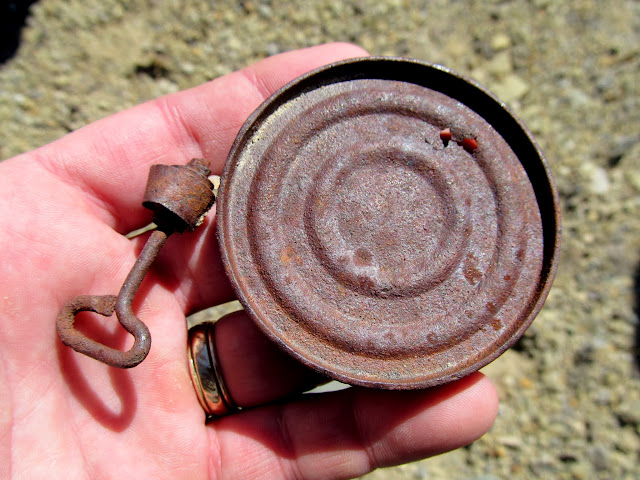 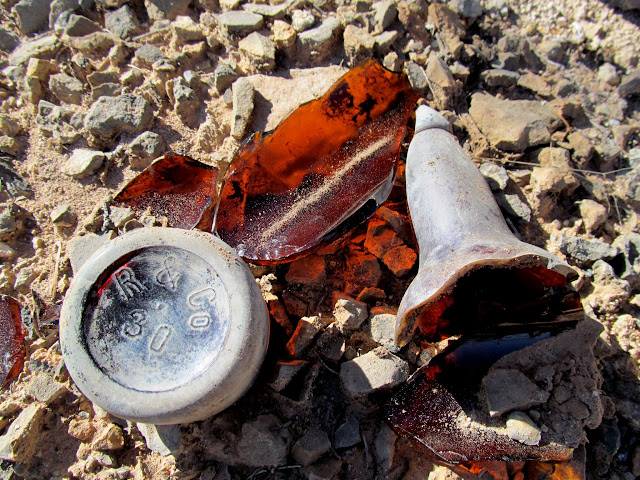 Cairn along the upper trail 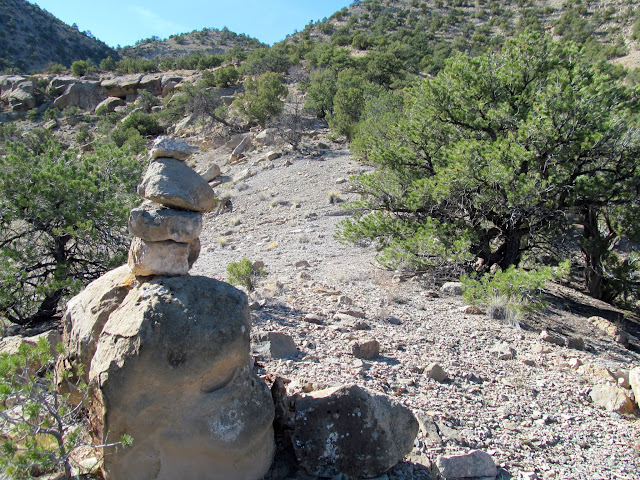 View downstream along the canyon 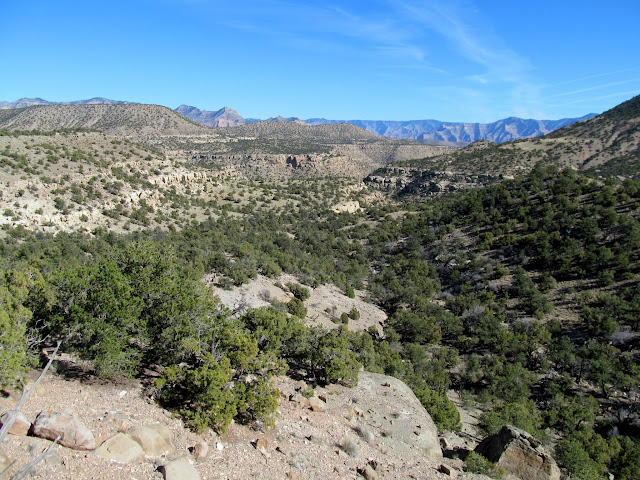 Closed road on the ridgetop 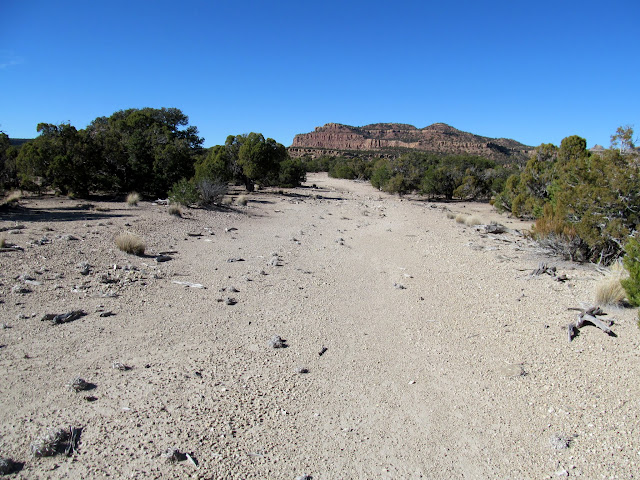 Descending the trail a short distance, we then cut cross-country to visit the brush corral. Just like the construction on the stock trail, an enormous amount of work went into building the corral. The perimeter of the corral is one third of a mile, encompassing four acres. Cliffs made up part of the corral, but much of it consisted of pinyon and juniper trees that had been cut and dragged into place to form a fence. Two live, standing juniper trees acted as an opening that once had a wire gate across it. After admiring the corral and the work that went into it, we hiked down the watercourse toward our machines. There were no breaks in the canyon walls below the corral until the mouth of the canyon, and we hypothesized that perhaps the entire lower portion of the canyon was also part of the corral. A simple and short brush fence across the canyon near its mouth would effectively keep livestock constrained within its narrow confines. 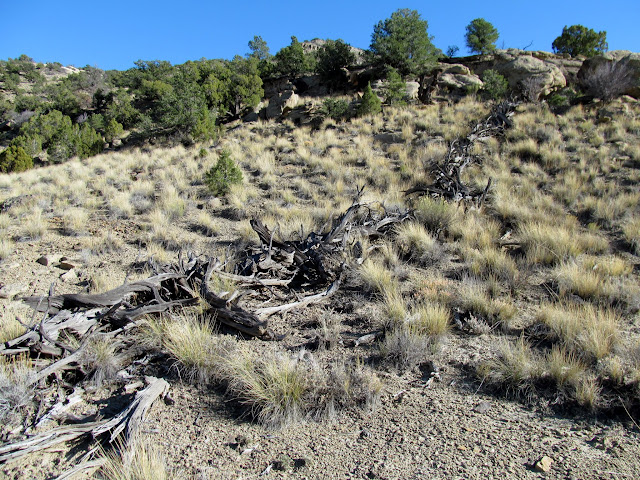 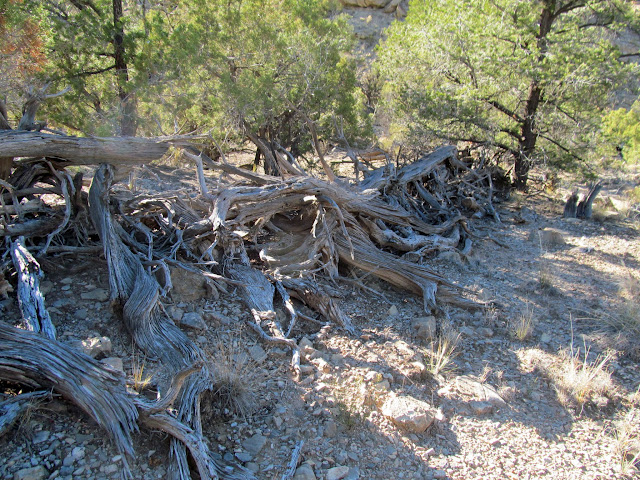 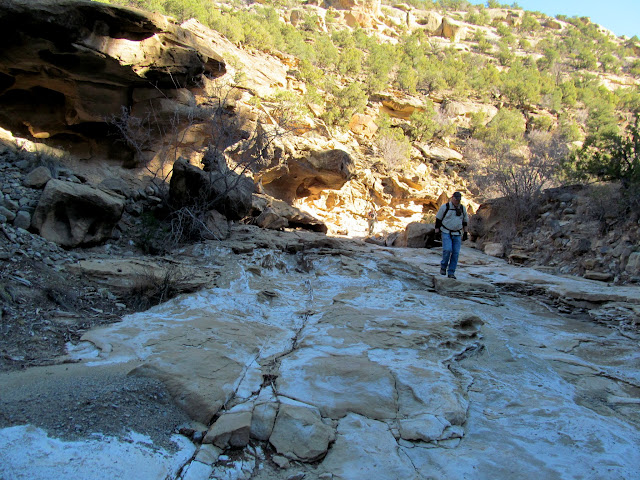 Back at the bikes 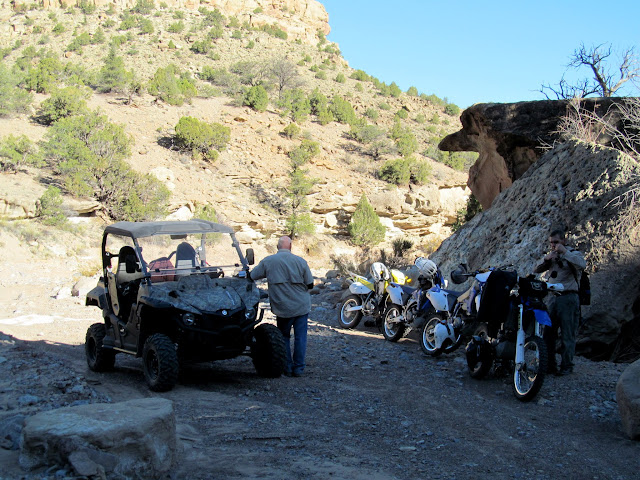 The entire hike had been a little over four miles, but with 900 feet of elevation gain/loss it felt like more to everyone in the group. My feet were sore when we reached our motorcycles. During the ride out of Turtle Canyon I crashed yet again. Even right after it happened I wasn’t certain how I’d done it. I think maybe I stalled out climbing a loose, rocky hill and just fell over. It was a very low-speed crash, and me and the bike were okay this time, too. I hurried to get the motorcycle upright and get back on the road, but after a quarter of a mile I realized I was missing a water bottle from a pocket in my backpack. I turned around to retrieve it and ran into Paul, who had noticed it in the road and picked it up (thanks, Paul!). The remaining distance to our vehicles went smoothly, with a stop to chat with some bighorn sheep hunters along the way. The group parted ways after loading machines back in Horse Canyon. It had been a successful trip, but we still had the rest of the stock trail down Trail Canyon explore someday… 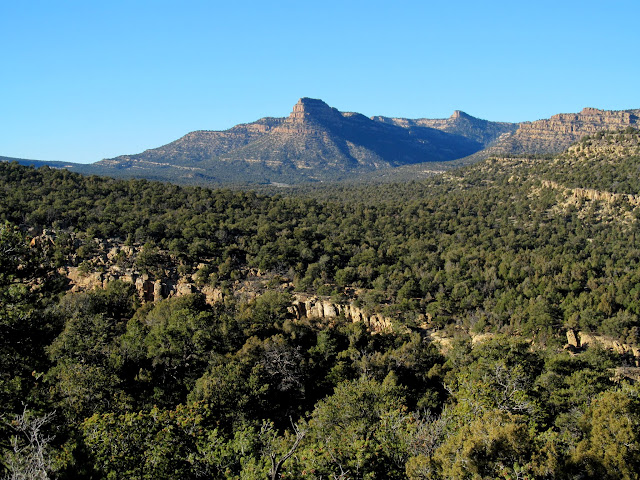