While floating the Green River in September, a chance sighting of a pile of rocks spurred another trip on motorcycles and on foot to investigate. The group had just gotten back on the river after looking at some petroglyphs when I noticed a stack of rocks against a cliff. I pointed it out to the group and we all took photos and exclaimed that we’d have to return later to check it out. 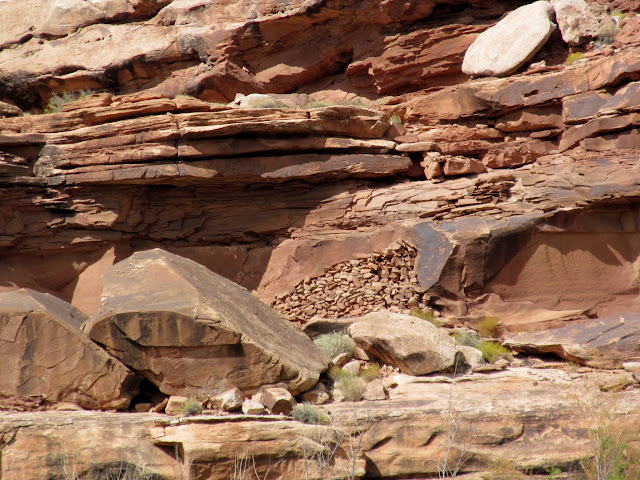 I did some reading to look for info about the trail. Steve Allen, under the entry for Tenmile Point in his Utah’s Canyon Country Place Names, calls this the Wheeler Trail. He mentions some inscriptions near the trail, including one by Arthur Wheeler in 1893, and posits that Wheeler may have been the one to build the trail. Fast-forward about a month and a half after our river trip and a few of us met just off I-70 at the Floy exit. It was a 30-ish mile ride to the end of Tenmile Point where we started hiking. We knew exactly where to find the constructed trail that we saw on the river trip, but none of us knew how to get below the cliffs that surround the small drainage where the trail is located. From where we parked the motorcycles we hiked straight toward the canyon’s rim, then followed the rim toward the river while looking for a break that would allow us passage down toward the trail. Eventually we encountered a sloping sandstone section that allowed us to descend below the rim, and just below that was a constructed section that led down a short 10′ drop. From there it was easy walking to the next set of ledges.

Getting ready to roll 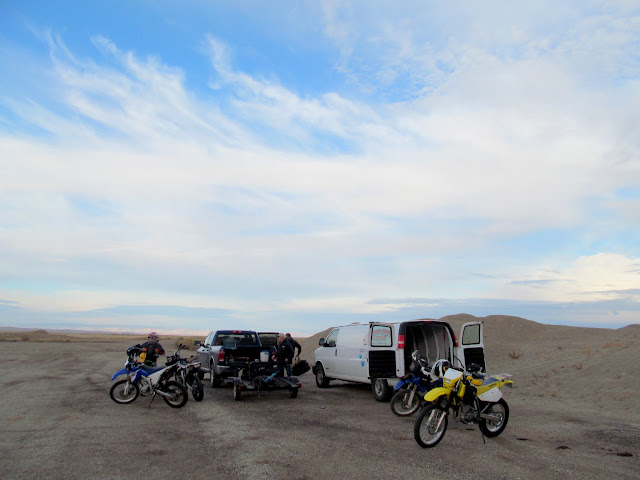 Getting ready to hike 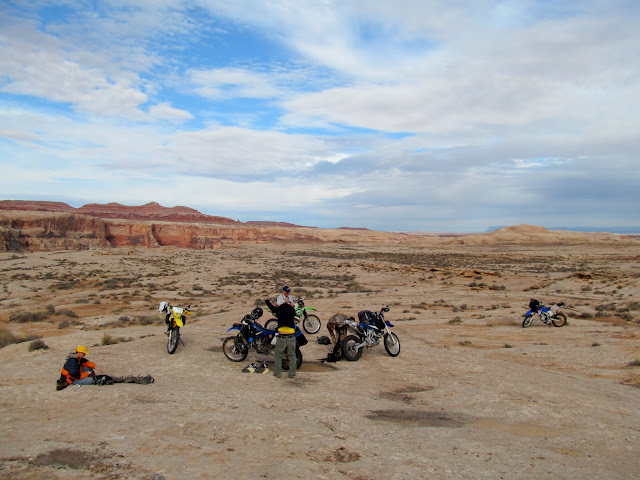 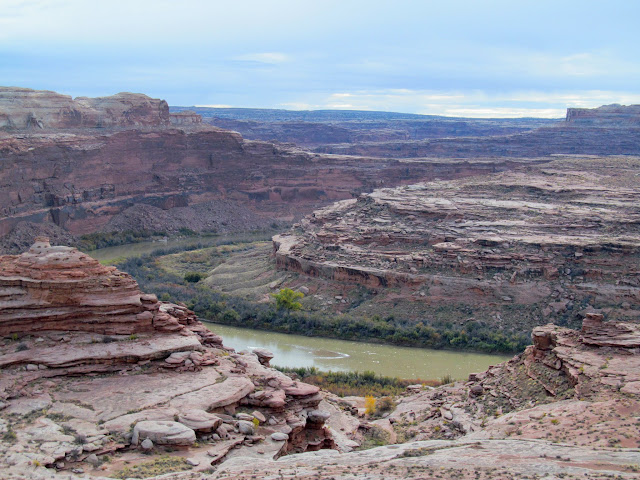 The crew hiking into the canyon 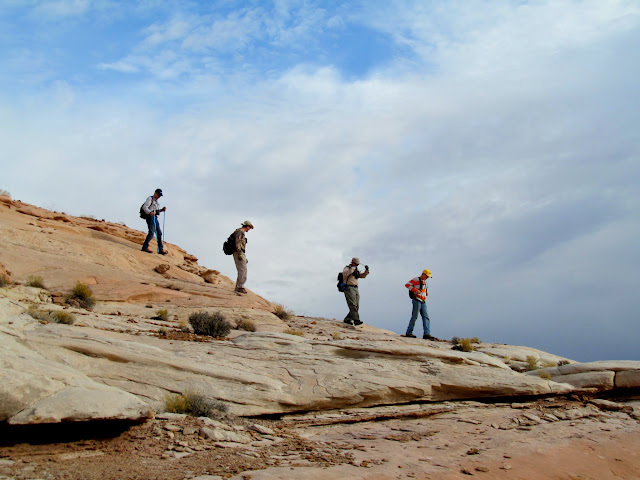 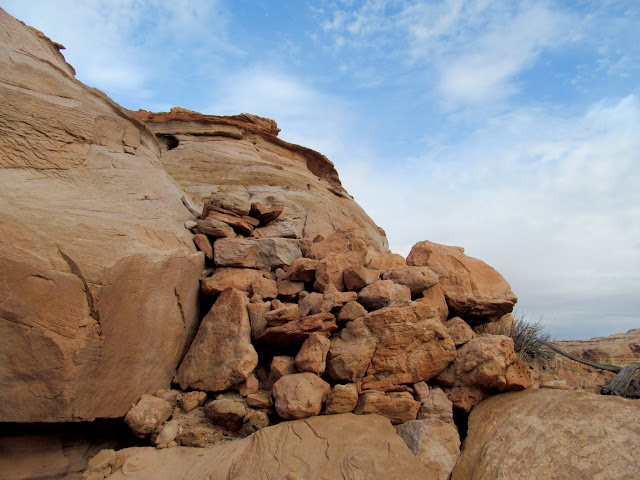 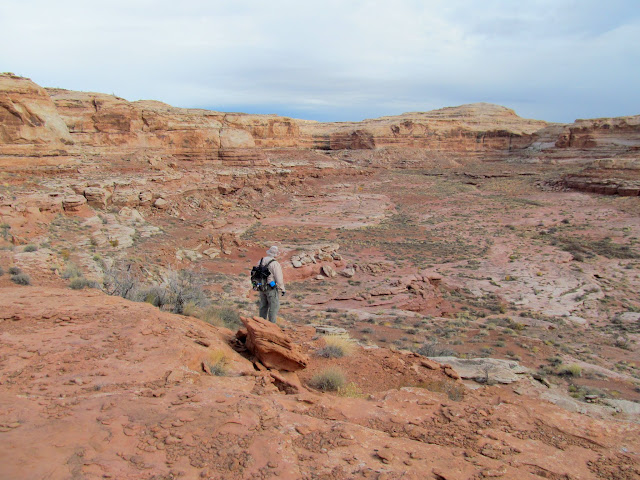 Me standing above the Green River 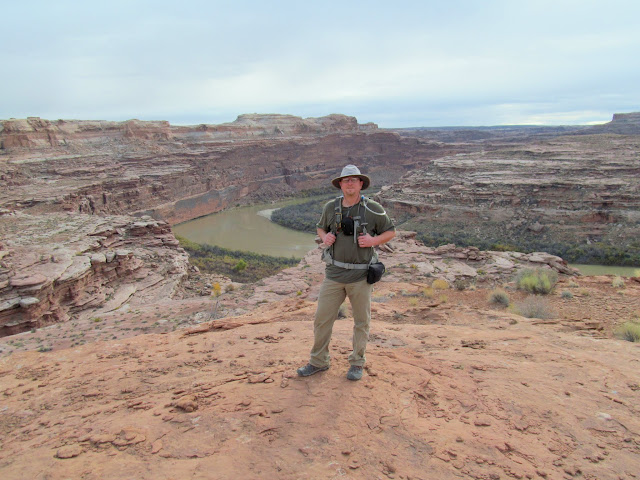 We marveled at the Wheeler Trail from above. A lot of work had been put into stacking rocks and, likely, filling it in with dirt that has since been washed away in the 100+ years since its construction. There may even have been some blasting done, but certainly the ledges had been chipped away with hand tools. After descending the constructed portion of the trail we checked out the cliffs and ledges and found some inscriptions and rock art. The inscriptions dated to the early 1900s, but we failed to find any writings by Arthur Wheeler. The rock art was faint but quite interesting, consisting of several life-sized animals including bighorn sheep, deer, and pronghorn.

A glimpse of the constructed trail from above 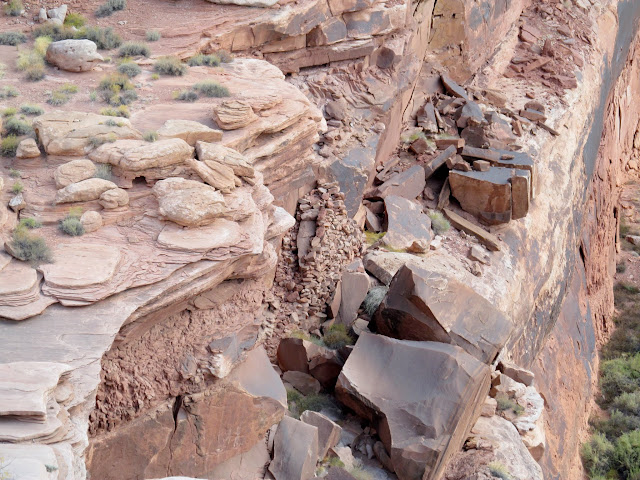 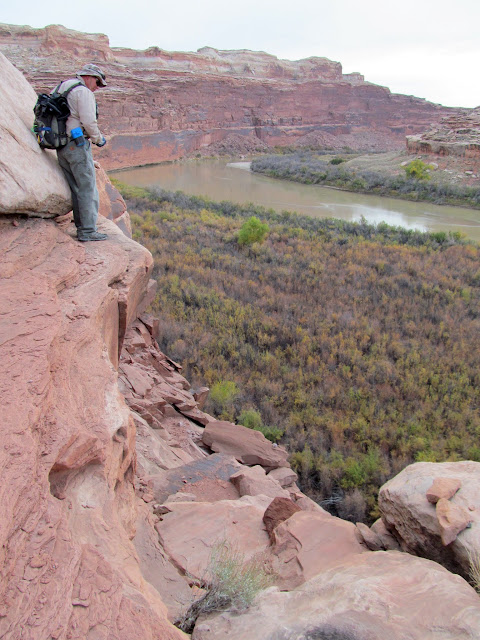 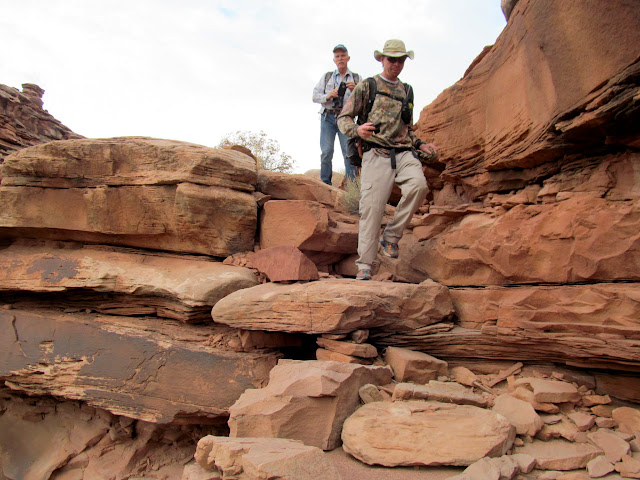 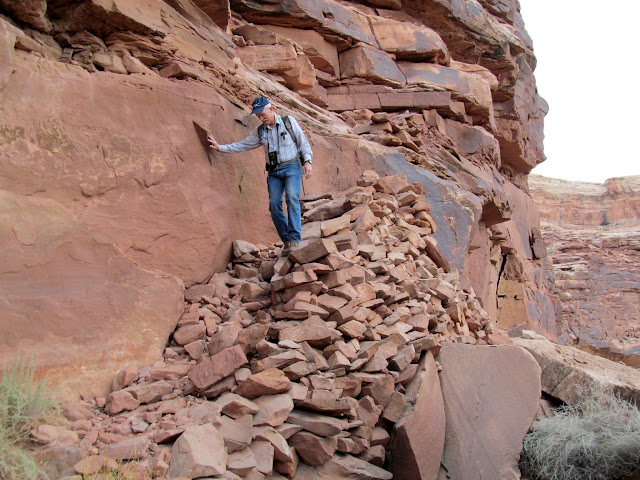 Checking out an unusual inscription 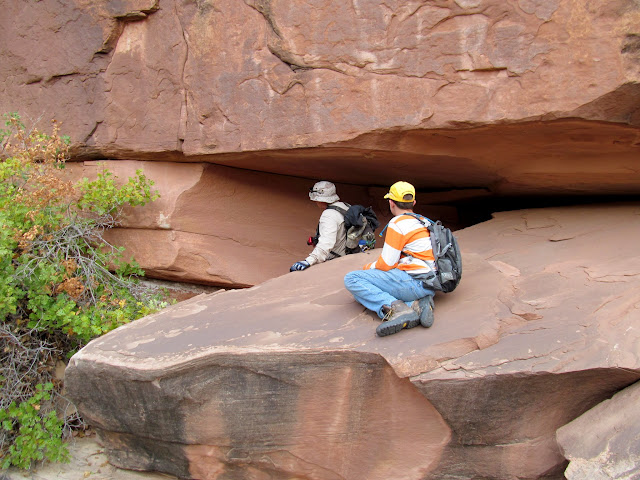 Gurdjieff was here, you are his grafitti, 1903 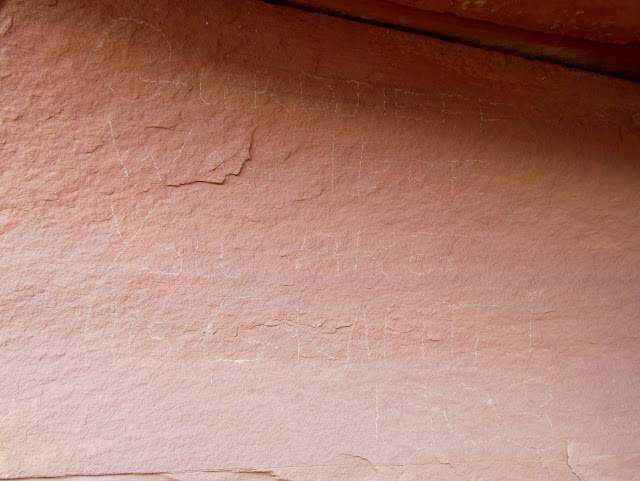 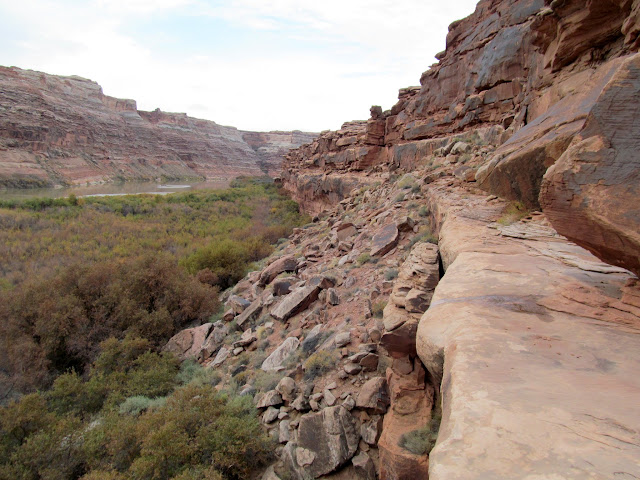 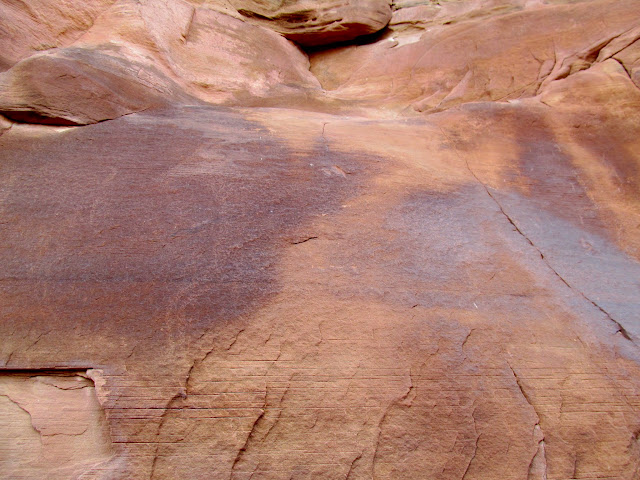 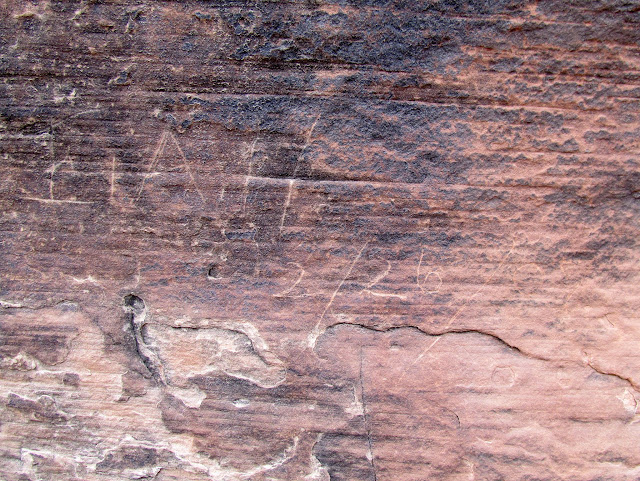 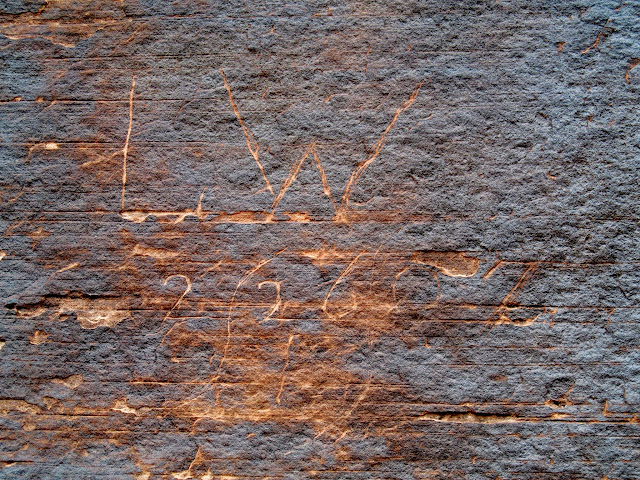 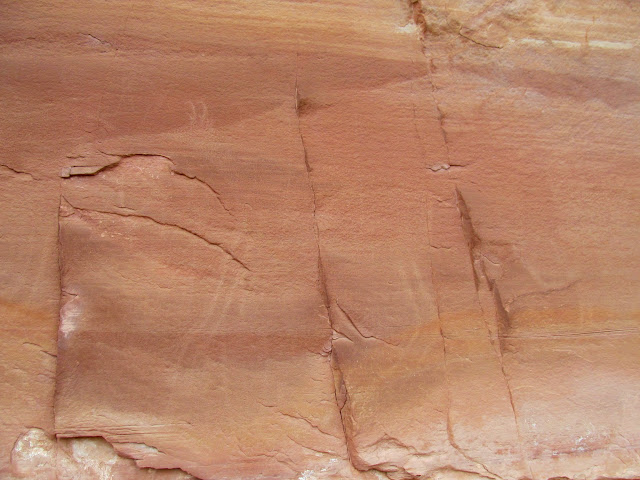 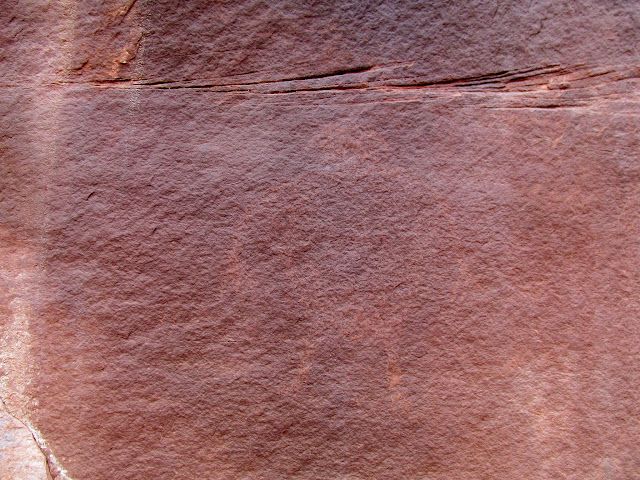 Below the ledges was a rocky talus slope that we descended, and from the bottom we bushwhacked to the east along the bottom of the cliffs. It was rough-going. The cliffs didn’t show much promise for any additional inscriptions or rock art–there were no nice overhangs or patina–so we called it quits before reaching the east end of the bottom. Returning to the top of the talus slope, we took a lunch break. After lunch we followed the Wheeler Trail back up to the road on Tenmile Point.

Scrambling down the talus slope 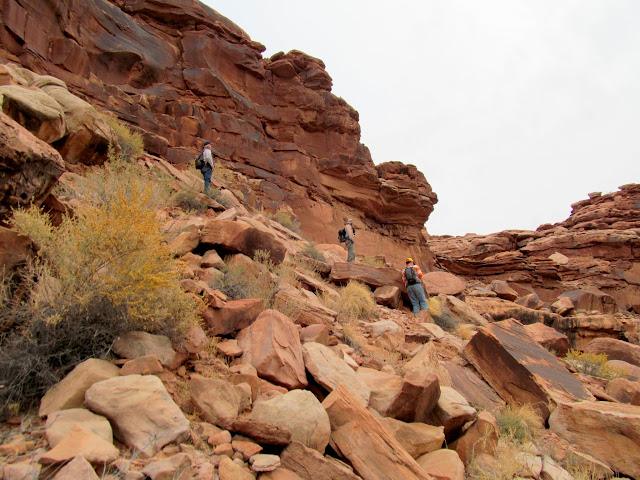 Down into the thick brush 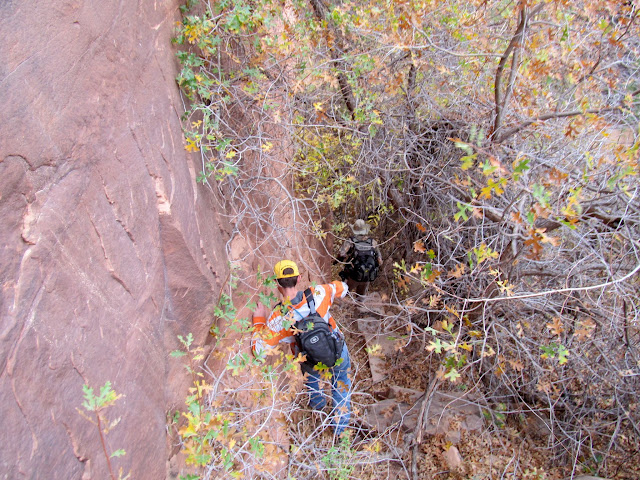 Taking a break from bushwhacking 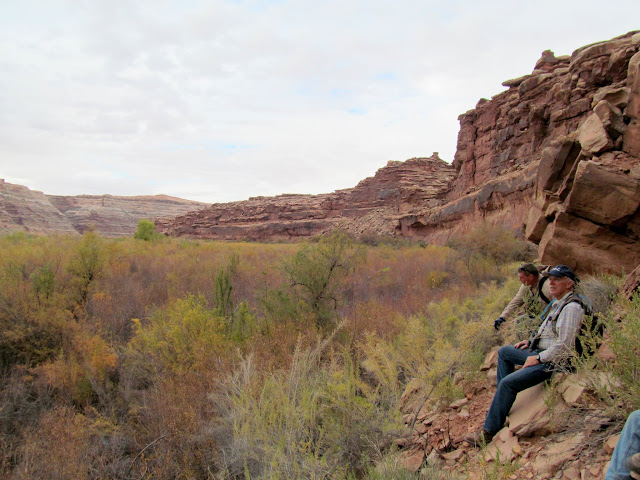 Back on our motorcycles we rode to a few overlooks of the Green River. One of the overlooks was directly across the river from June’s Bottom, where we could see the sand bar campsite where we lost our canoes back in September. We followed the road to its end near Trin Alcove Bend and enjoyed the views of the Green River on both sides of a narrow neck of slickrock. From there we cruised back toward I-70, loaded the bikes, and hit the town of Green River for dinner at Ray’s before heading home. 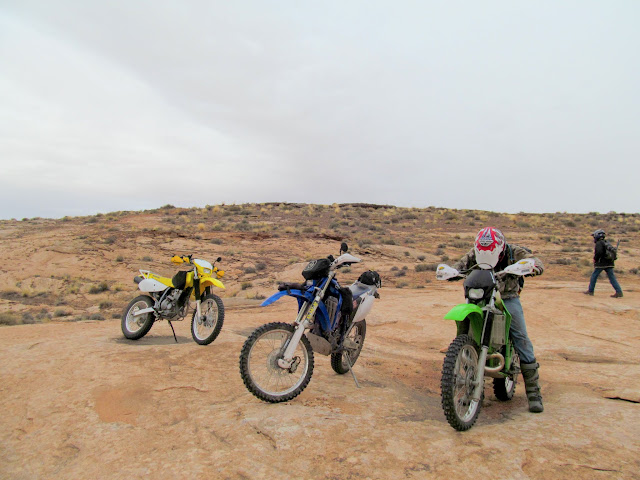 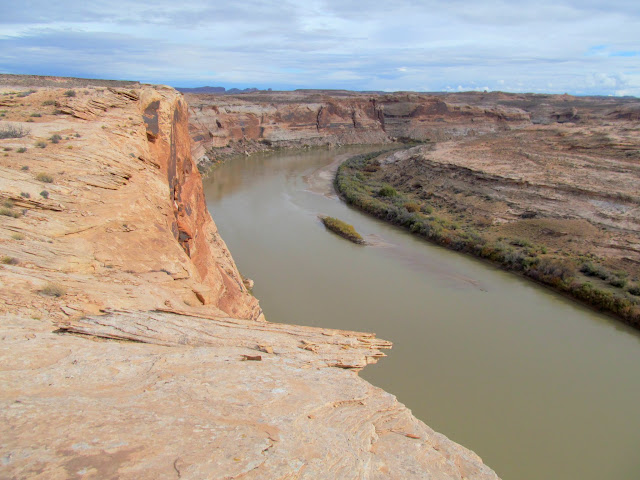 Sandbar on which our near-disaster occurred 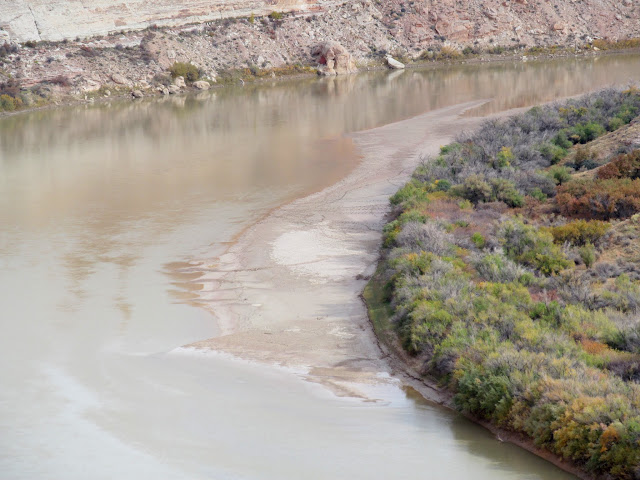 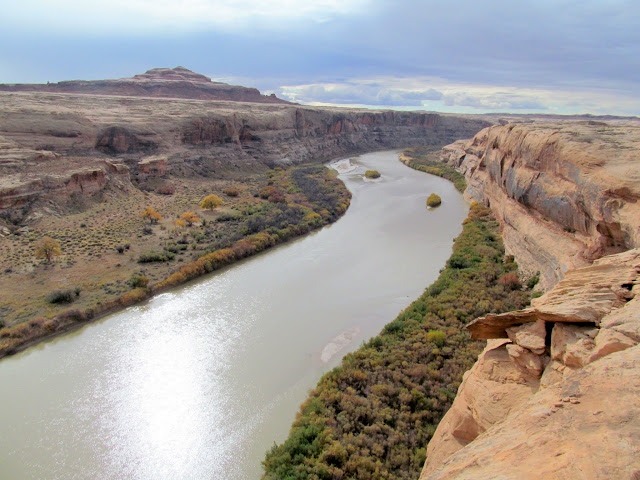 End of the road at Trin Alcove Bend 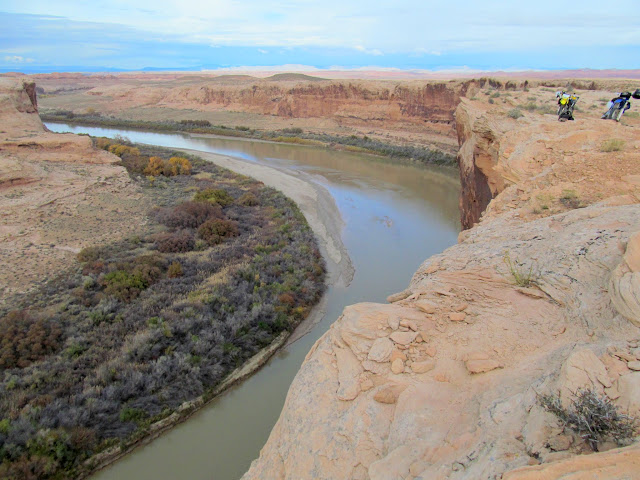 Since our trip Wade has done additional research and found that there are several Wheeler inscriptions near the stock trail and that we simply didn’t look hard enough for them. A return trip may be in order!