I had plans for a solo hike in the Nine Mile Canyon area this past weekend, but when Alan invited me to hike to the Solstice Snake petroglyph near Moab with him it was an easy decision to ditch Nine Mile. Nine Mile will always be there waiting. Alan had also invited his friend, Dick, so early on Saturday morning we all met in Price and piled into my Jeep. Two hours later we were at the trailhead which is usually shared with some pretty serious 4X4s. As we donned our packs, a propane-powered rock crawler was next to us, unloading from a trailer towed by a diesel Grand Cherokee. We walked up the canyon along the 4X4 road and quickly realized why it was best to leave my Grand Cherokee at the TH–there are some pretty gnarly ledge obstacles along the road. I saw the first major wildflower blooms of the year while we hiked. A huge Fremont’s mahonia bush alerted me to its presence by scent well before I even saw it. I also saw my first Claret Cup Cactus bloom of the season–one of my favorites. 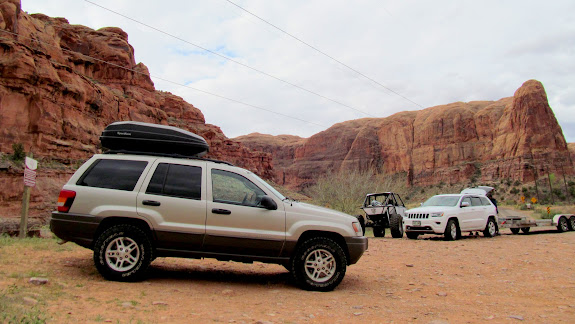 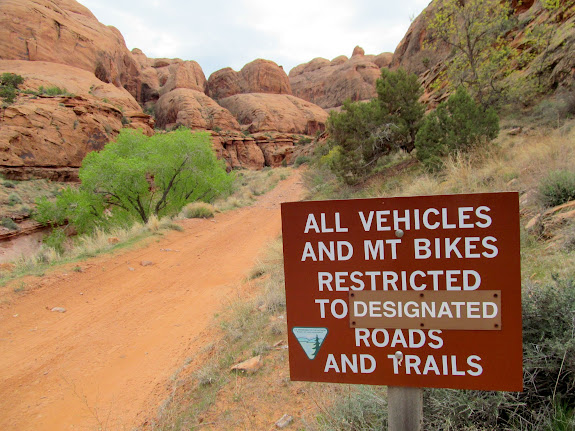 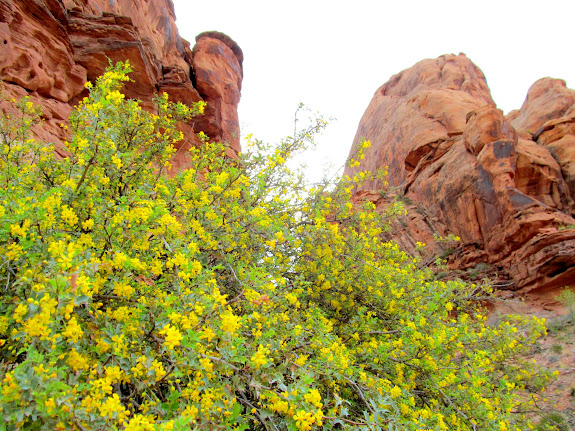 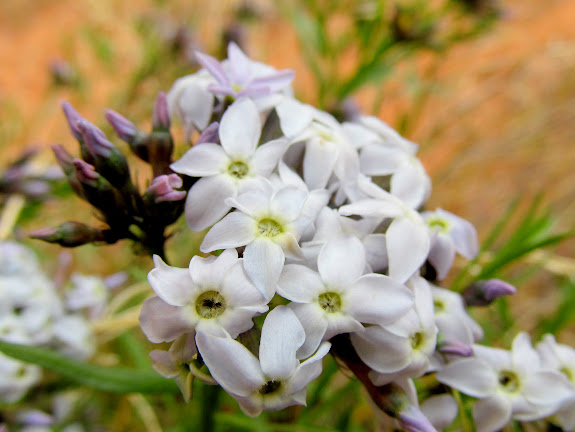 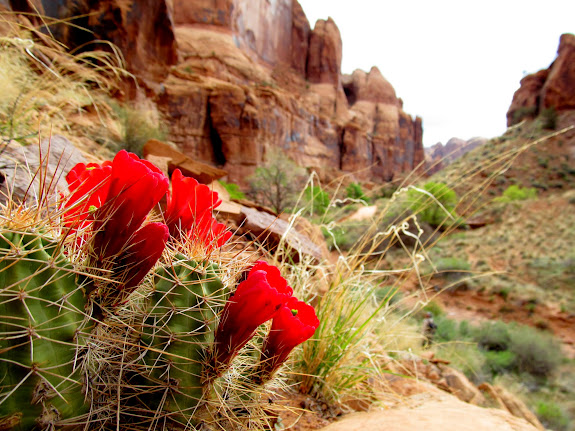 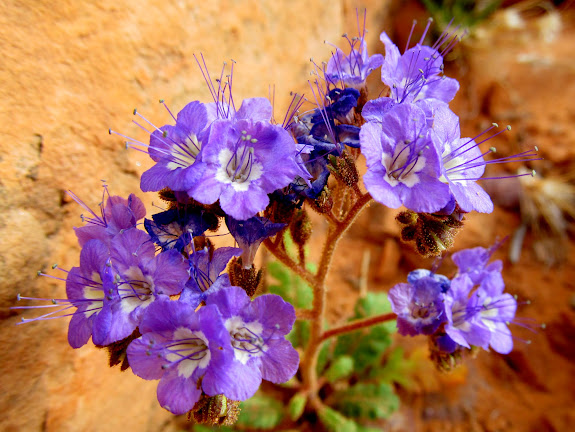 The propane rock crawler and a big TJ finally caught up to and passed us. We stopped often to scan the canyon walls with binoculars and spotted a nice petroglyph panel that was well worth the hike over from the road. The cottonwood trees (another plant named for General John C. Fremont) were sprouting new, bright green foliage, while some trees had more unusual ornamentation.

Rock crawler and TJ cruising up the canyon 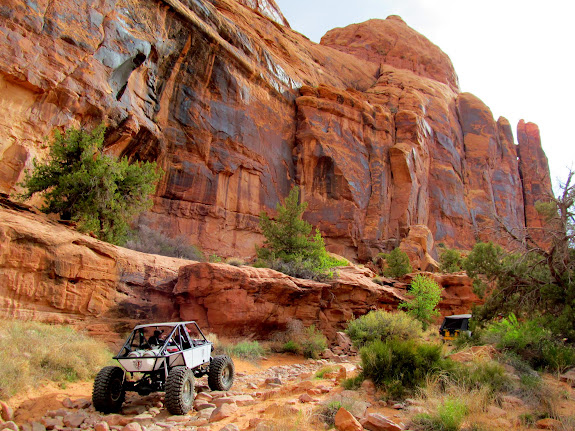 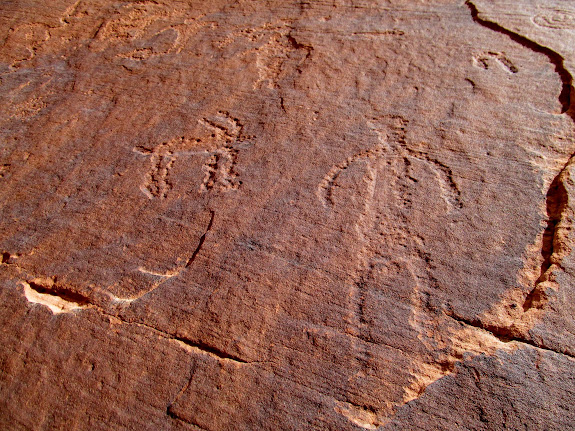 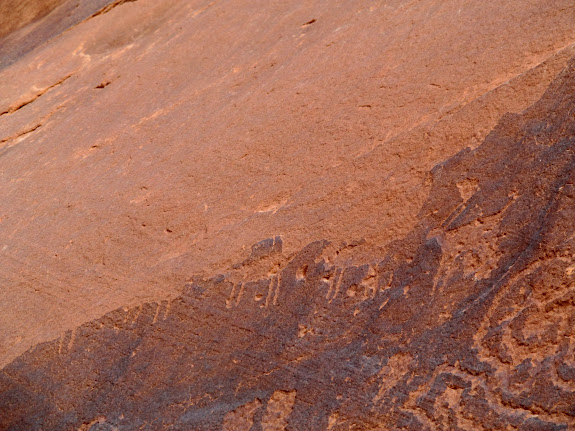 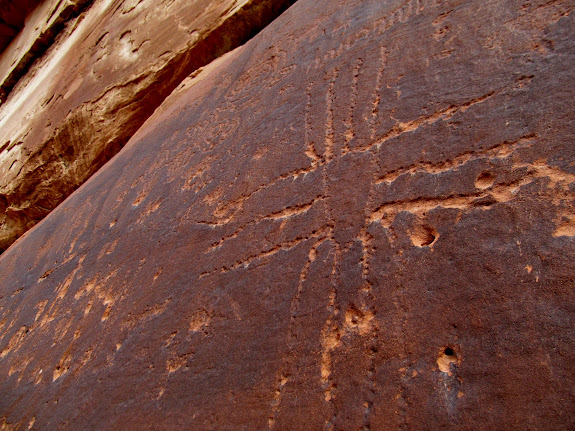 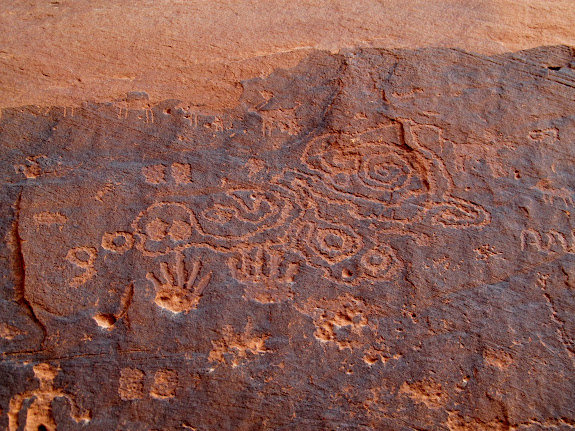 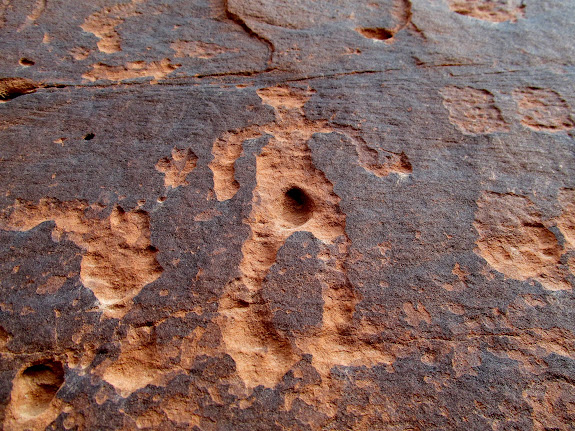 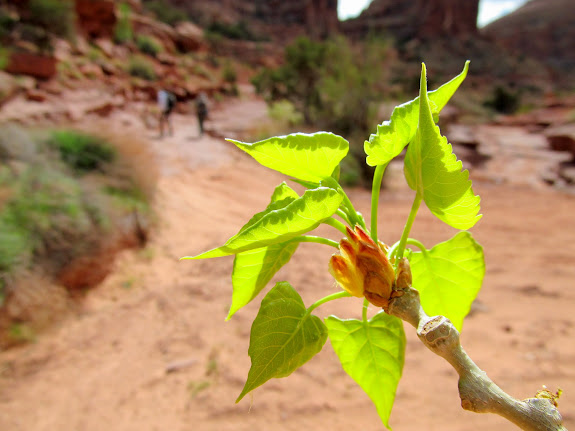 Another brick and the wall 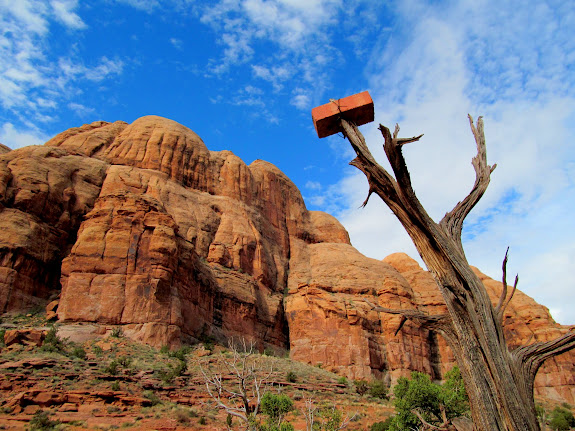 Our small group left the main canyon and climbed a series of side canyons toward our goal while passing several natural arches. The route became steeper and rockier before eventually easing up a bit and leveling out. And then, there it was–the Solstice Snake. This petroglyph is a wonderful piece of work by itself, but on the solstice a beam of light appears through a crack in the nearby fins and casts an arrowhead-shaped spotlight on the snake’s head. To see the arrowhead of light I’d recommend taking a look at Randy’s report of this phenomenon. 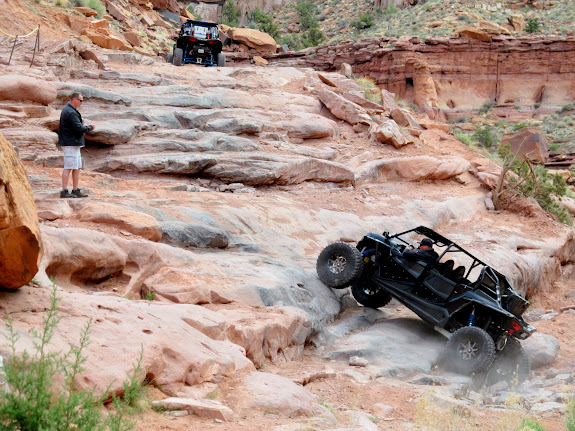 Watercourse with Dick visible just below and left of center 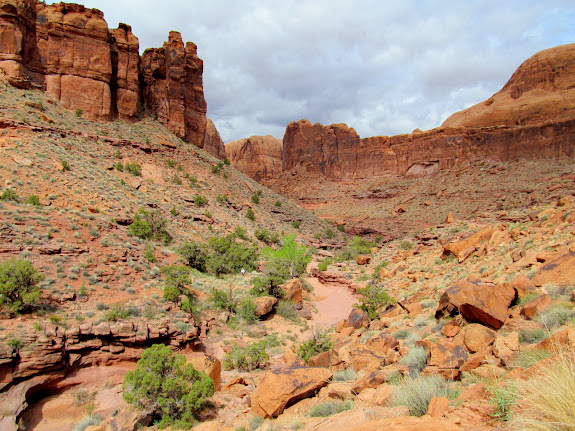 Climbing up a side canyon 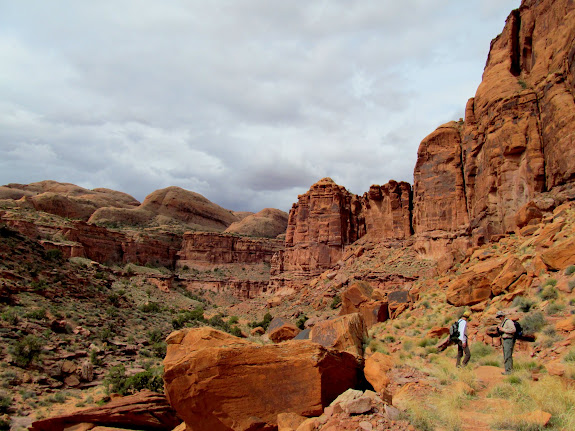 Dick on a natural bridge 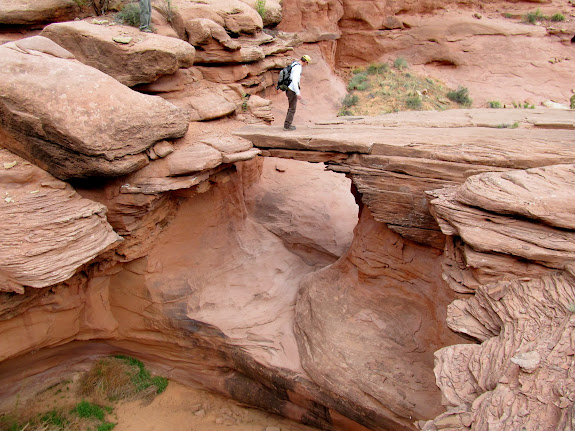 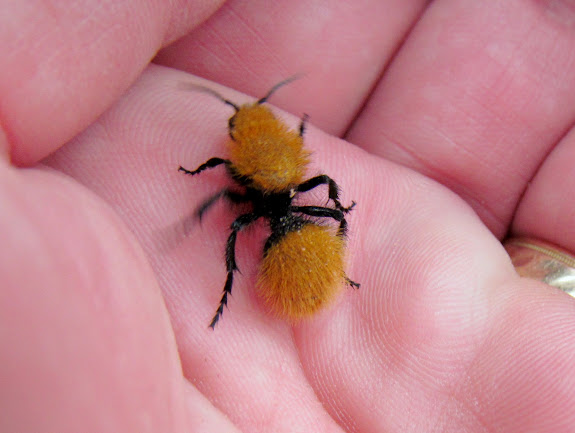 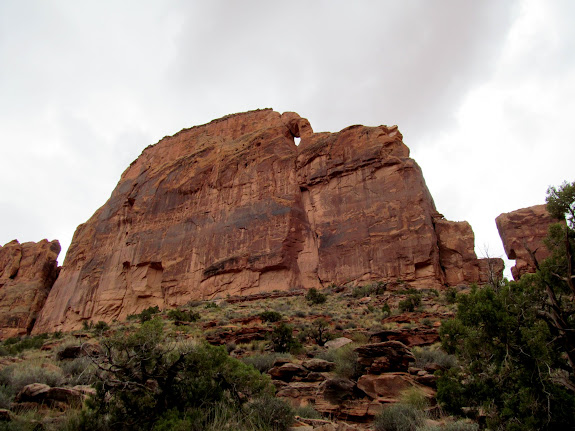 Still climbing the side canyon 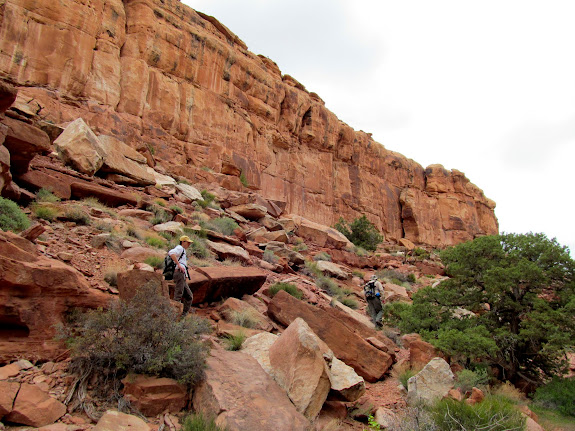 My first view of Solstice Snake 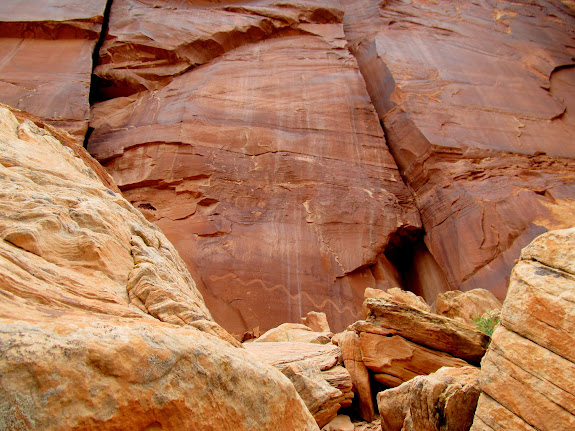 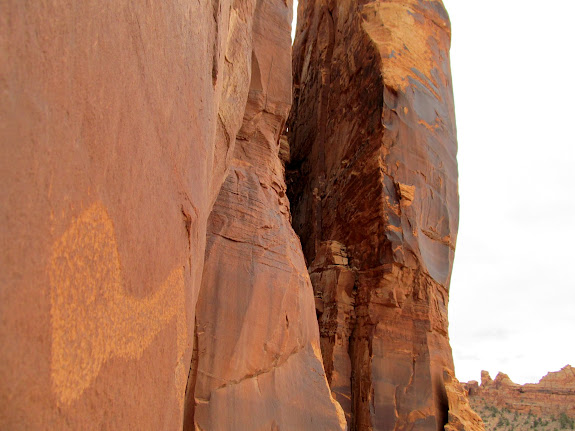 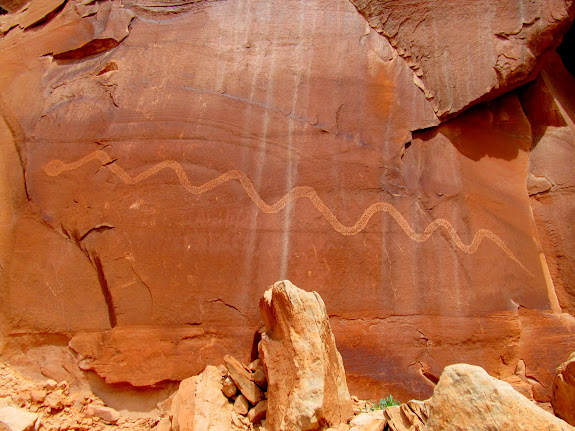 We ate lunch just below the Solstice Snake and then wandered around a little and found a few more petroglyphs. During the hike back to the trailhead there were a few UTVs and dirt bikes on the road. Our round-trip hiking distance was 10.2 miles–more or less, depending on whose GPS you consulted. Just before reaching the TH a group of four canyoneers caught up to us who had completed a five-mile loop route that involved a few rappels, and since they were parked next to the Jeep we chatted with them for a bit while putting gear away. The day was finished off perfectly with a burger at Ray’s Tavern in Green River, which was packed with the usual Saturday evening crowd but still prompt in serving us. So, now I’m contemplating a return on the solstice–assuming the arrowhead of light appears on both the summer and winter solstice–perhaps a December trip is in order… 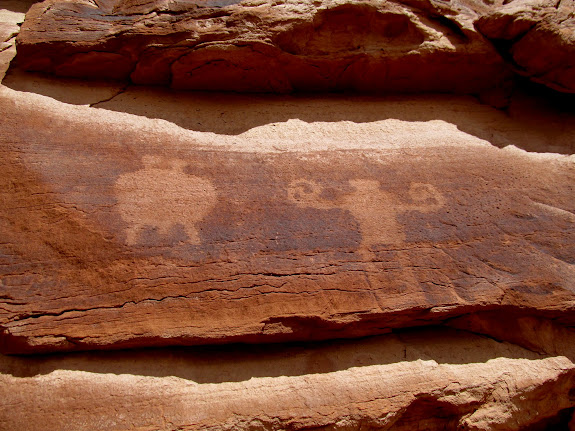 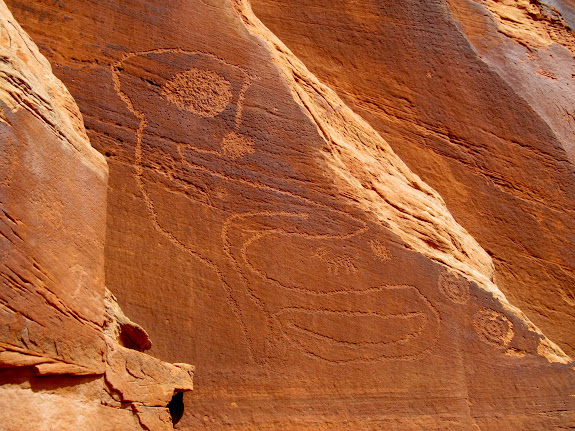 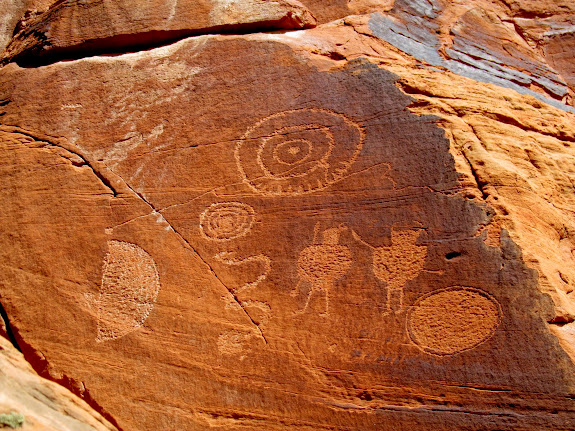 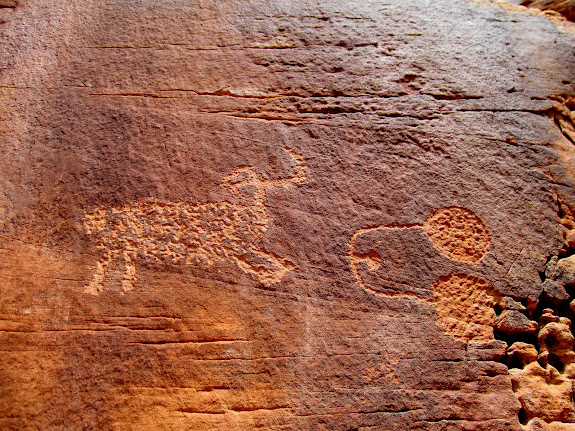 10.2 miles back at the trailhead 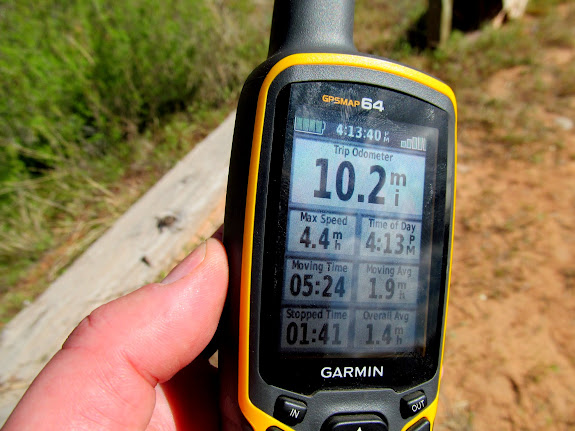