On Friday I went for a casual jaunt to Nine Mile Canyon with the objective of getting a close-up look at the Coyote Placing the Stars panel. The petroglyphs are visible from the paved road, but they’re near the top of a cliff and inaccessible from directly below. I hiked up a side canyon where there’s a talus slope that breaches the cliff band and allows access to the top. On the way up the canyon, however, I spotted a large Ute horse petroglyph on the opposite canyon wall that looked worthy of a detour. The horse was about four feet long and had several petroglyph lines extending behind it, one of which was about 15 feet long. I crossed back to the other side of the canyon and found a small panel before climbing the talus slope.

Coyote Placing the Stars from below 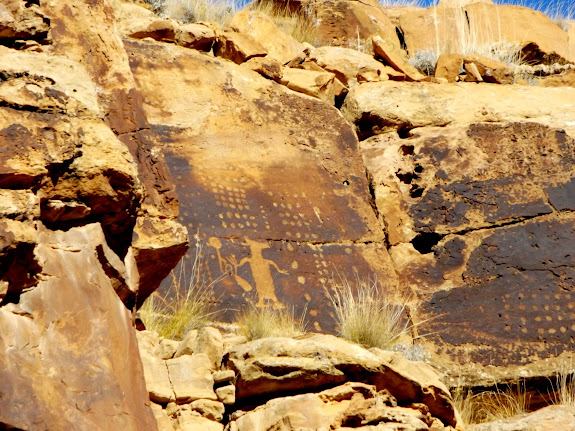 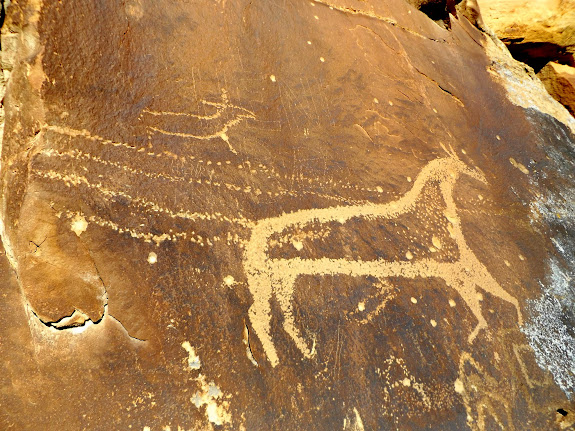 Petroglyph panel on the way to Coyote Placing the Stars 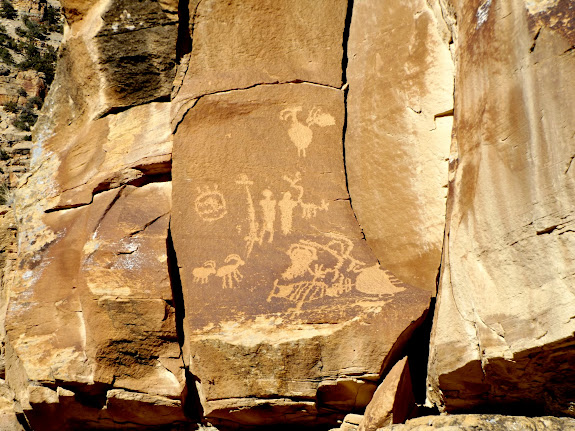 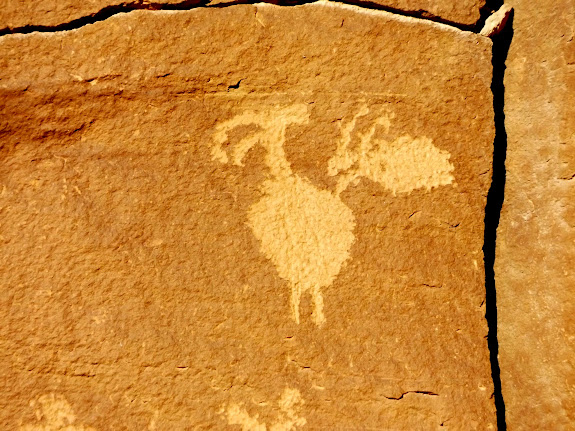 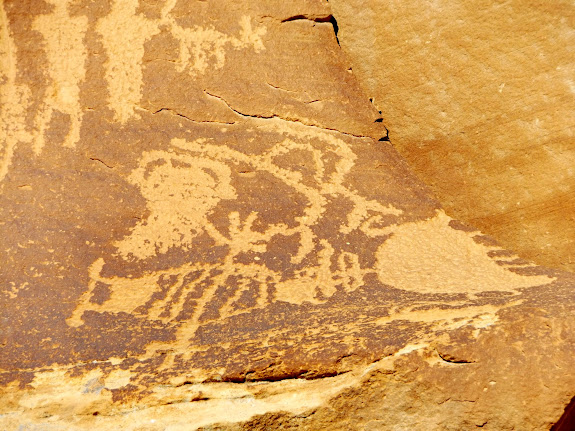 Once above the cliff band I hiked back toward Nine Mile. A section of the cliffs almost directly above the Coyote panel had recently fallen and I found some of the newly-formed boulders on the steep slope below, and some of them had petroglyphs on them. I might not have thought to check the fallen boulders for rock art except that Alan had discovered them a couple of weeks earlier. I climbed down to Coyote Placing the Stars and had to take my pack off in order to scoot across a narrow ledge just before reaching the rock art. The ledge in front of the panel is too narrow to get back far enough for a photo containing the entire panel. Perhaps a telephoto shot from below is actually the best way to capture it. While I was up there I intended to try finding a way to another panel to the left of Coyote but somehow I forgot about it.

Huge section of cliff that fell 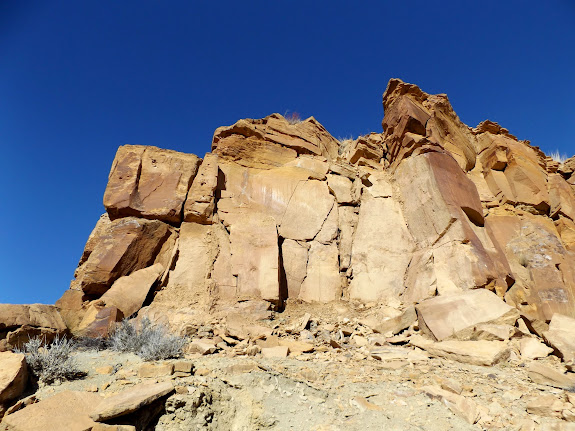 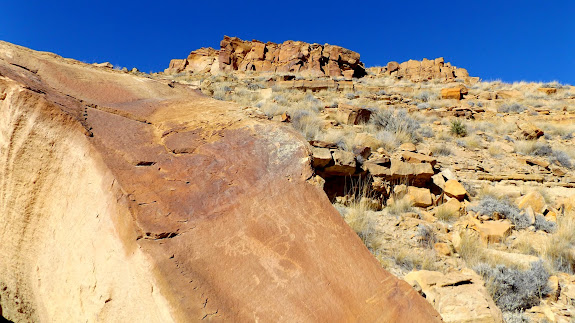 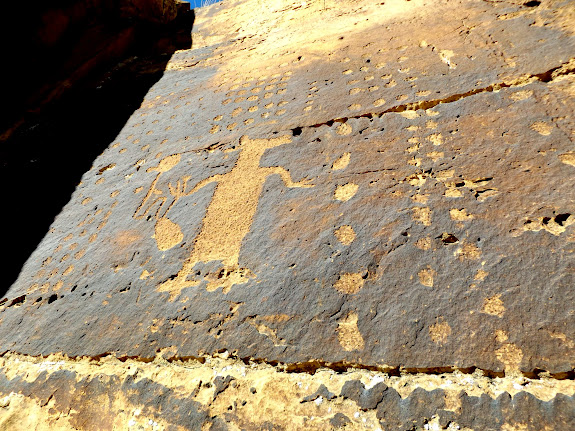 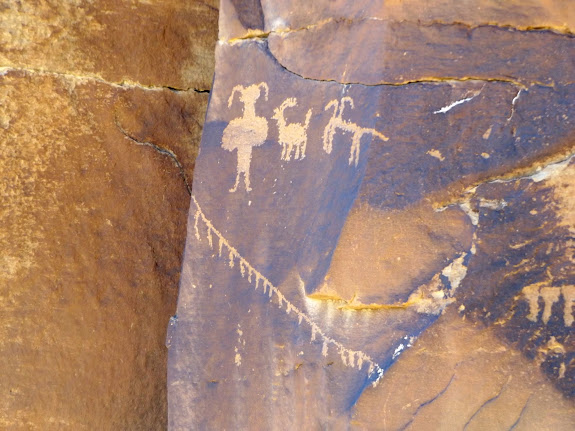 Next I planned to drive to Gate Canyon to hike up to some petroglyphs I’d spotted from below on an earlier trip. While driving there, I couldn’t help but look for more rock art. I spotted the Crane Panel and recognized it from photos I’d seen online, so I decided to stop and hike up to it quickly. I always run the risk of running out of daylight when I stop at every interesting rock art panel, so after I was back in the Jeep and driving down the road, I told myself that I wouldn’t stop again unless I saw some pictographs that I hadn’t yet seen, since pictographs are much less common than petroglyphs in Nine Mile. 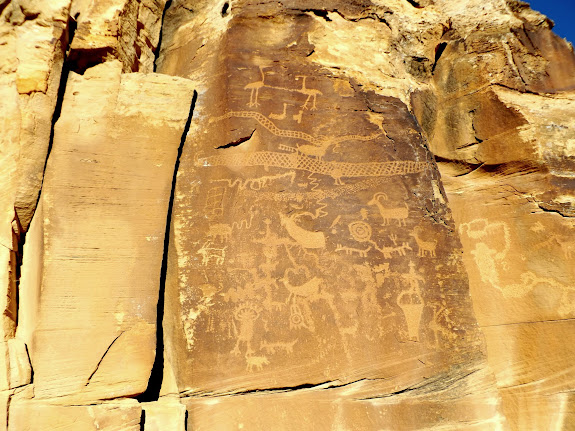 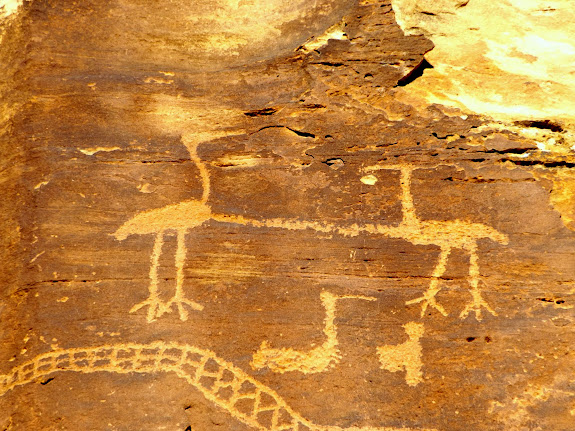 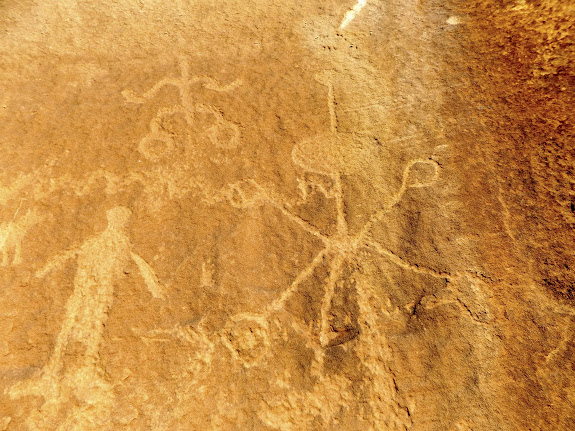 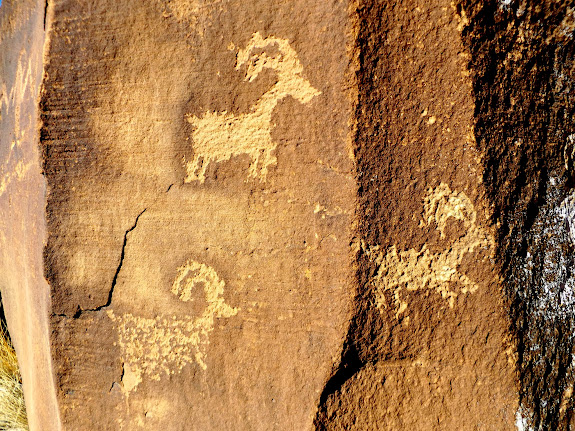 It turned out that I did spot some pictos and so I reluctantly stopped. The pictographs weren’t great but as I walked along the cliff line on either side of them I found some pictographs, inscriptions, and a granary that made the stop very worthwhile. One of the pictographs resembled a dinosaur, which I found amusing. An inscription by F.P. Fullmer from 1896 piqued my curiosity–I did some research on him after the trip and found this brief history. The granary was high up in a crack and was well-preserved. The roof was mostly intact, as was some of the cordage that held part of the floor together. A 1908 inscription was next to the granary. Farther along the cliff line and up high were some interesting white pictographs. 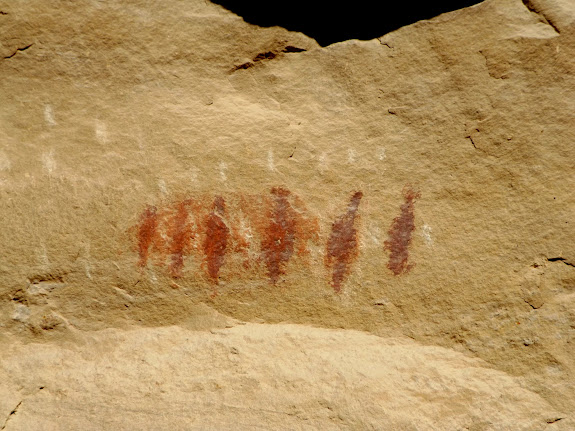 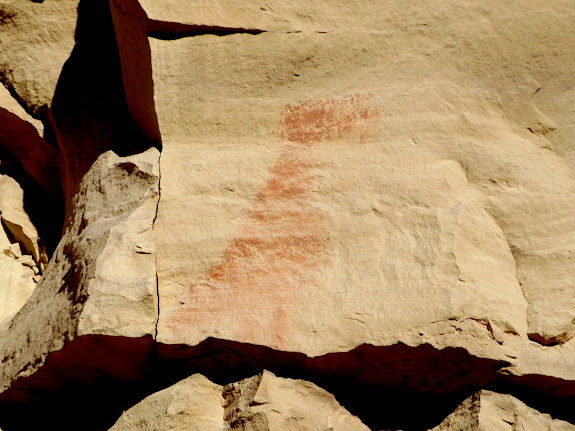 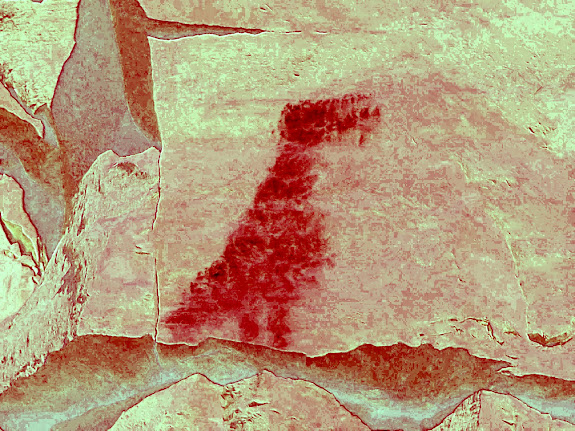 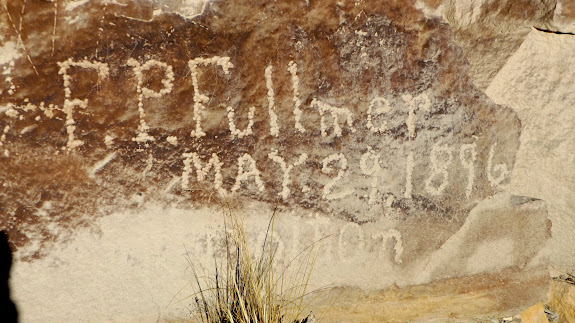 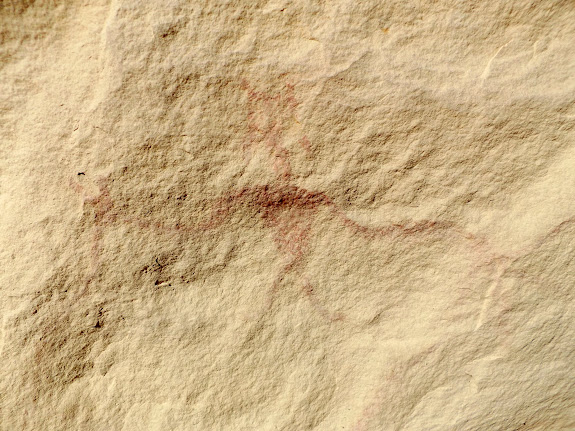 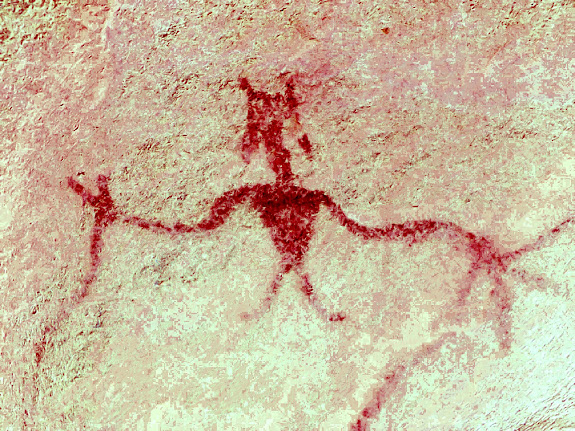 Granary high in a crack 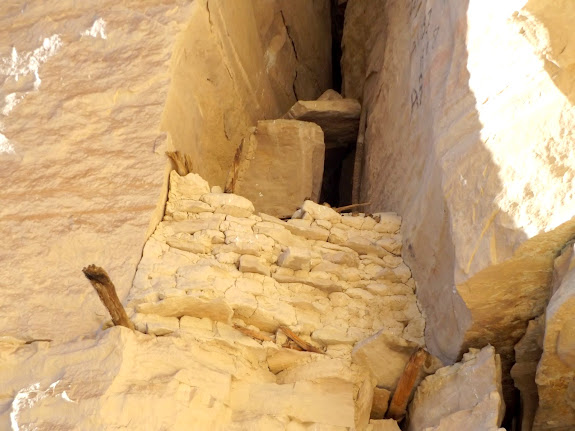 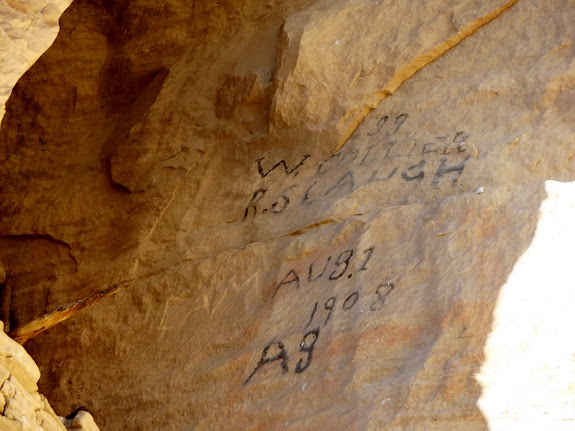 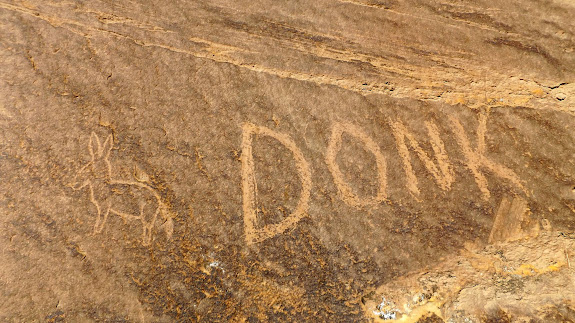 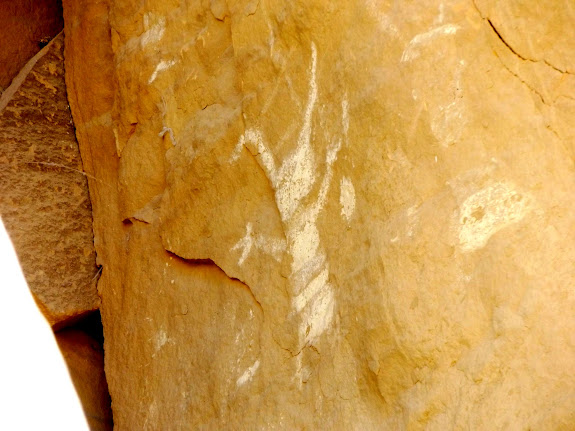 I finally reached the spot near Gate Canyon that I’d planned on hiking up to. It was a short hike up to some cliffs one level above the road, and the panel was large with many unique petroglyphs. It was the last panel I visited before starting the drive home, during which I only stopped to photograph a few of the many deer that were grazing in the fields along the road. 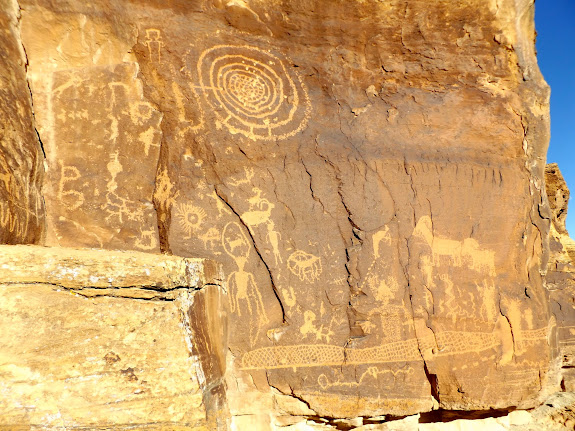 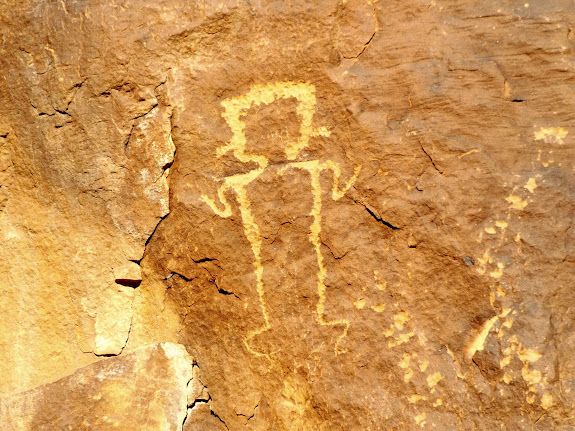 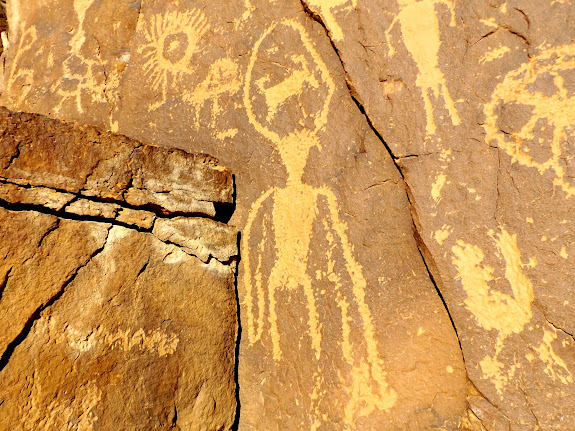 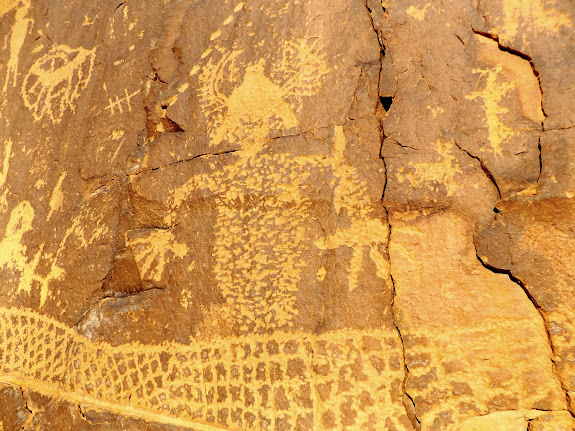 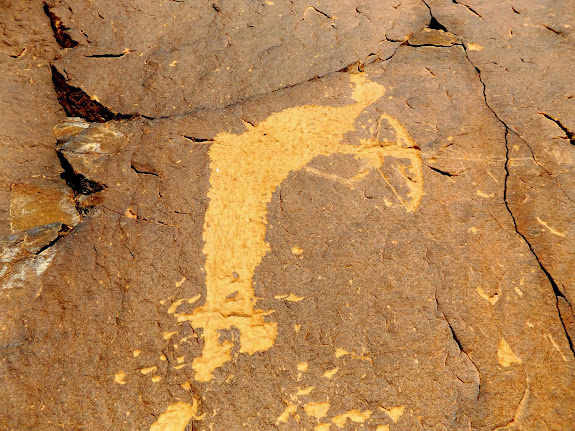 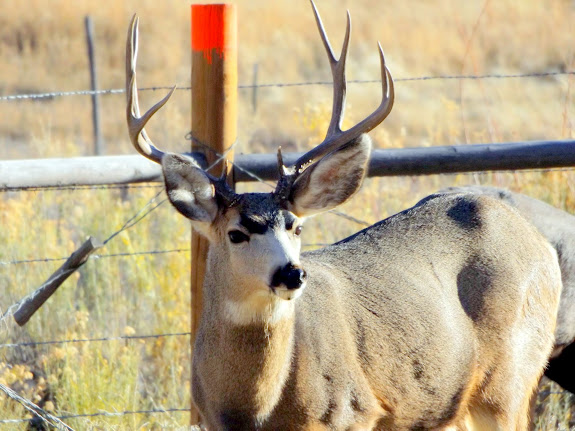