I’ve done several shorter hikes this month, none of which seemed to warrant their own photo album or blog entry, so I’m condensing them into a single trip report for the month of January. The first hike was one closer to home. I’ve been trying to locate any rock art close to Price that I can, and I heard about some near Hiawatha. I suspected that the pictographs were likely inaccessible on private property, but I decided to use the couple of short daylight hours between the time I got off work and sunset to look in another less likely spot. I didn’t find any rock art, but I unexpectedly stumbled upon a pit house along Miller Creek that had a lot of potsherds piled up around it. Although it was a short hike, the sun set on me before I got back to the Jeep. It was a great show watching the shadow of the Wasatch Plateau creep eastward across the valley while I made my way home.

Partial wall of a pit house 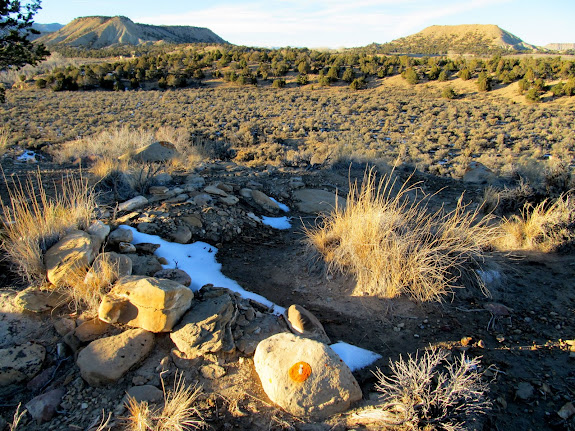 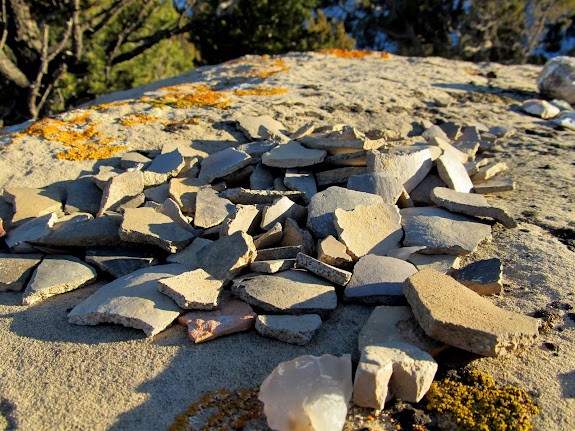 A few of the more interesting potsherds 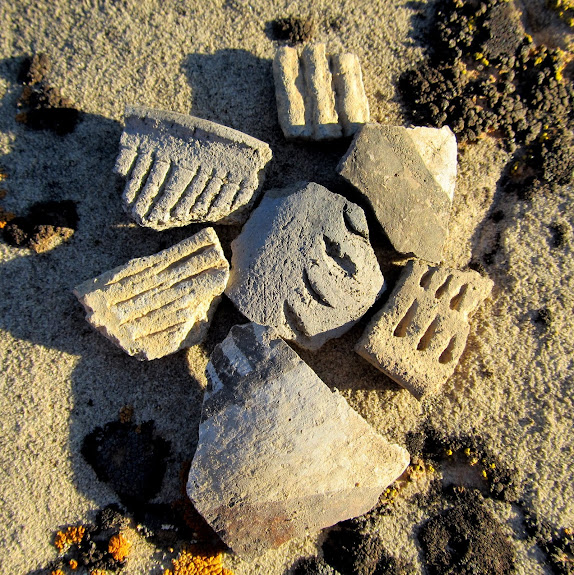 View over the Price River Valley toward the Book Cliffs 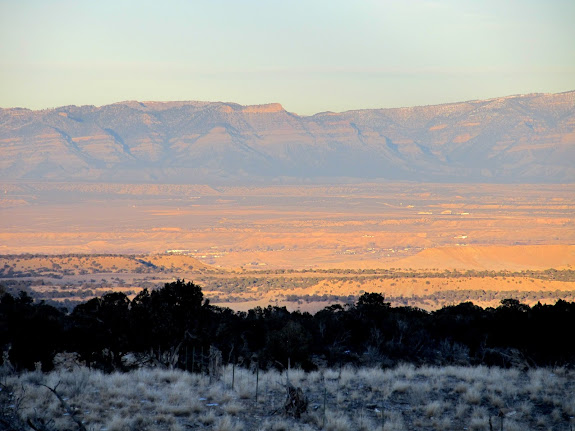 Another hike was inspired by the first. I started thinking of how many pit houses I knew of along tributaries to Huntington Creek, which sparked a memory of a friend telling me about several pit houses along Cedar Creek. They had been excavated by archaeologists, which may have made them easier for me to find in Google Earth. Despite being legally looted, the Fremont village still held a lot of pottery pieces. I also found at least three minor sites which weren’t part of the excavation. 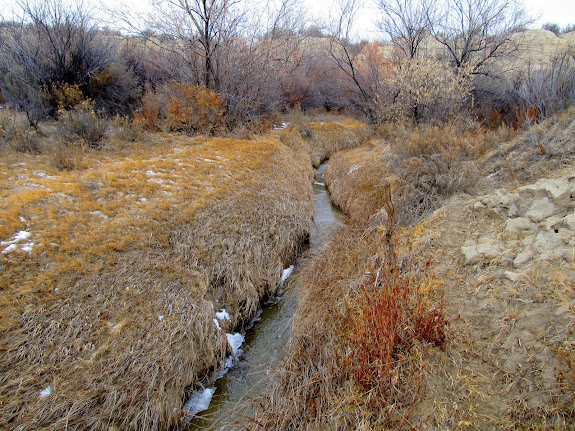 Potsherds near an excavated Fremont village 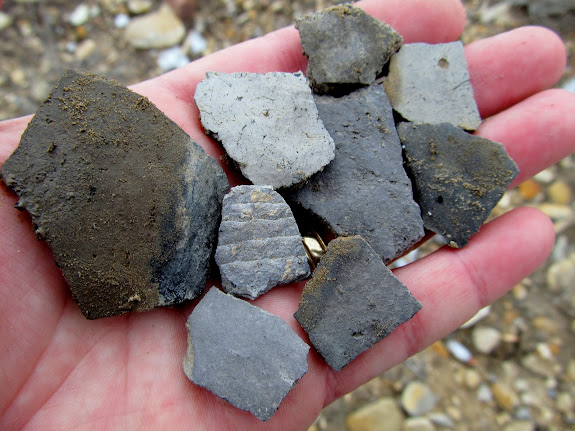 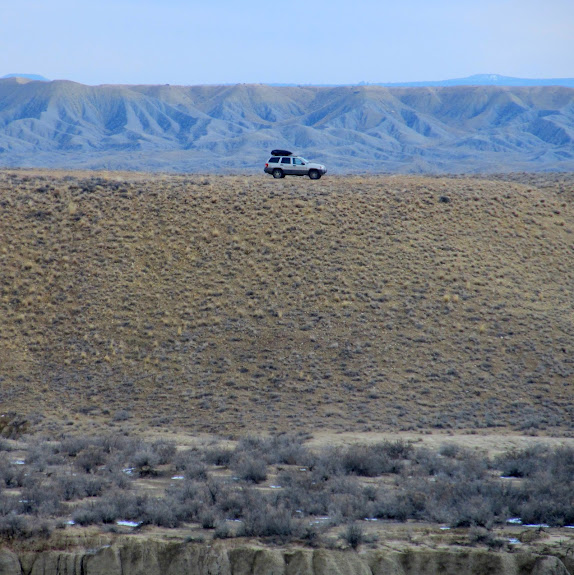 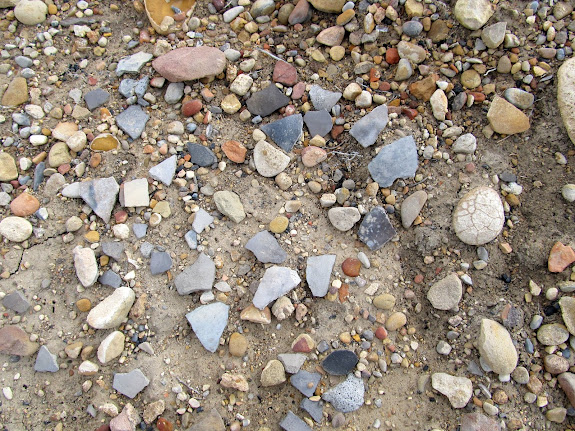 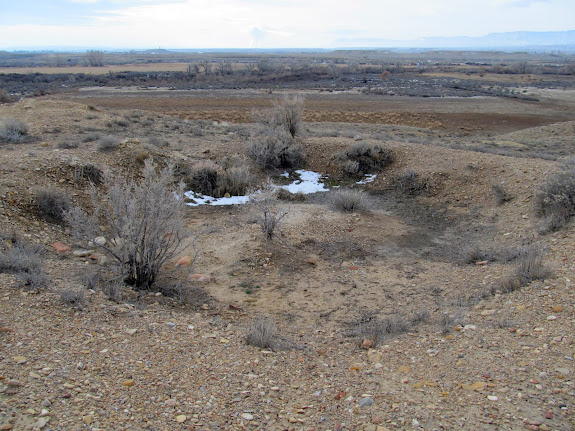 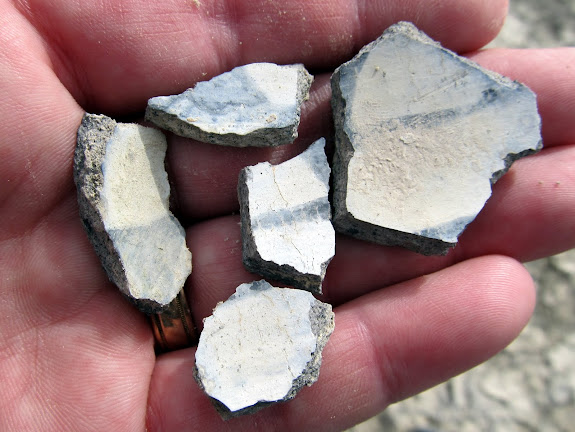 Last weekend I hiked with Alan and my son, Bradley, near the Price River. Alan had learned of some pit houses or lookout towers which we tried to locate. We found evidence of sheep herders and Indians, sometimes both in the same place. The best find was the remains of a granary that still had some corn in it. Bradley and I had separated from Alan–he was hiking along the top of a ridge line while we hiked below it. I spotted a corn cob at the bottom of a cliff, so I took a few steps back to look upward and spotted mud and sticks from the ruined granary that once held the corn.

Alcove with branches across the opening 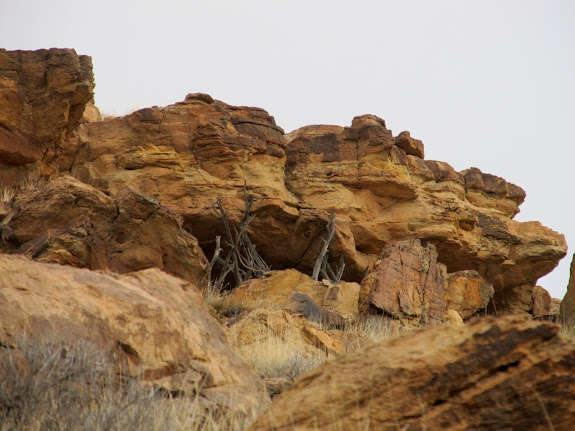 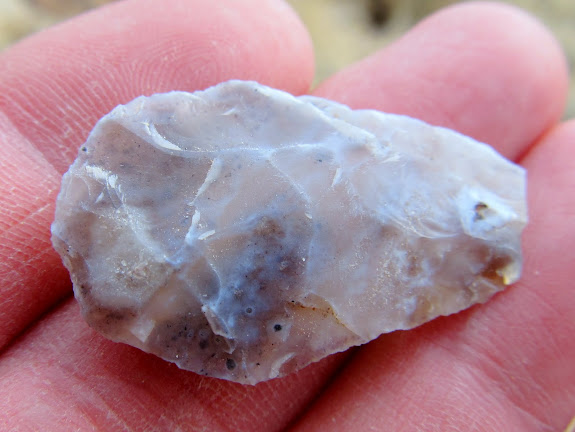 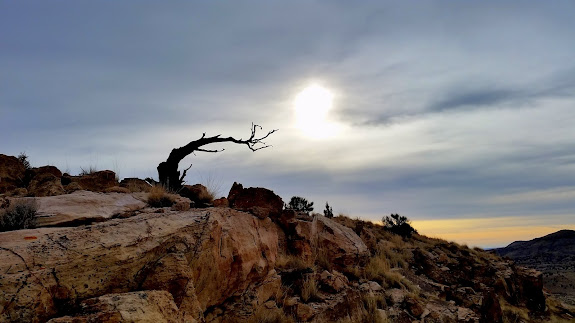 Alan and Penny crossing the Price River on a makeshift bridge 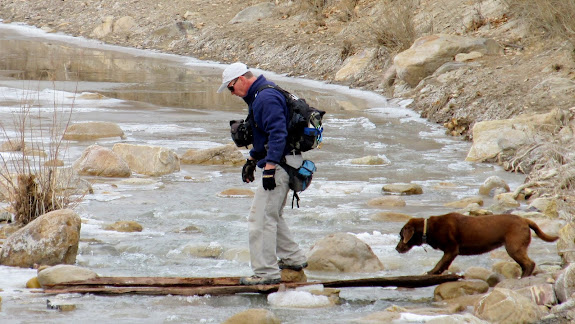 The remains of a pit house or lookout tower 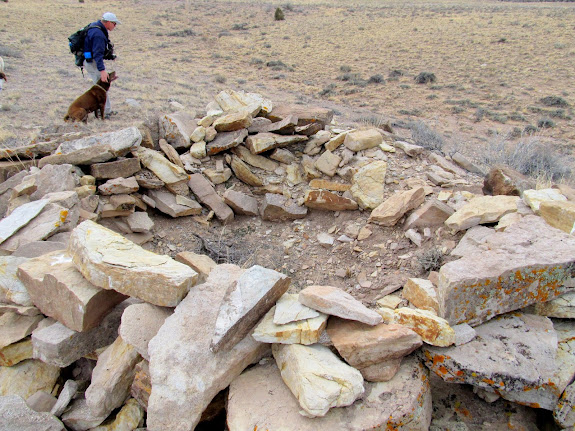 Corn cob found below a granary 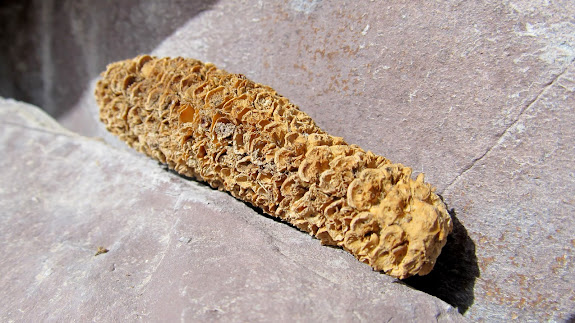 Mud and sticks from a fallen granary 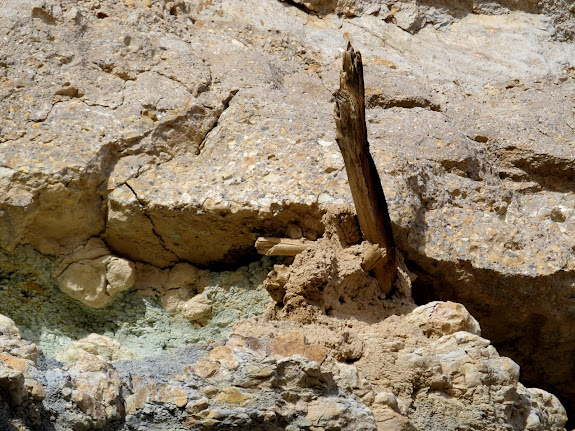 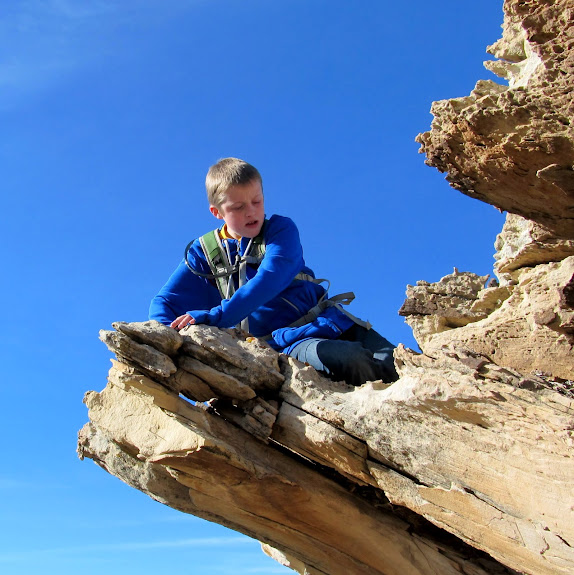 A couple of days later, after work, I returned to Garley Canyon to revisit some rock art that I’d taken my kids to several years ago. I’d later learned of some slab-lined granaries below the rock art that I hadn’t noticed on my earlier trip. I spotted them easily this time, and I chalked my failure to notice them before up to inexperience. After visiting the rock art I climbed up onto the mesa above and walked around. The only interesting things I saw on top were deer, and they seemed to be doubly interested in me.

Grand Cherokee from above 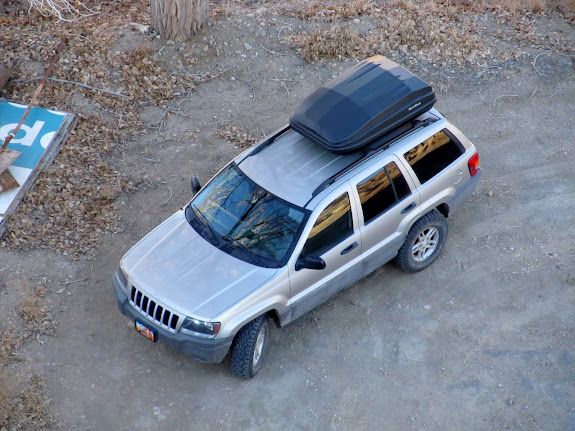 Old ladder below some petroglyphs 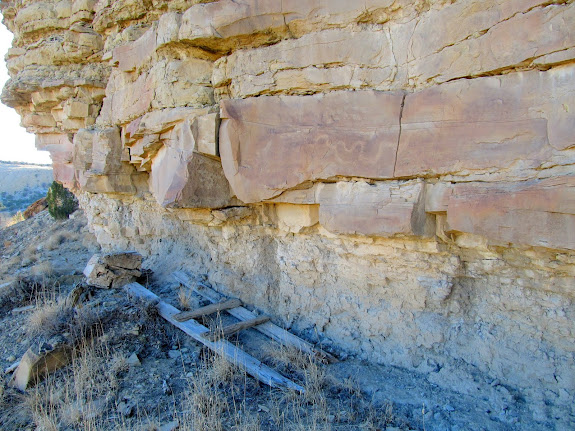 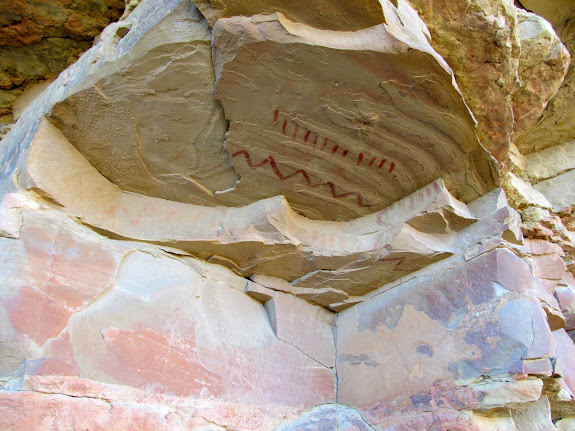 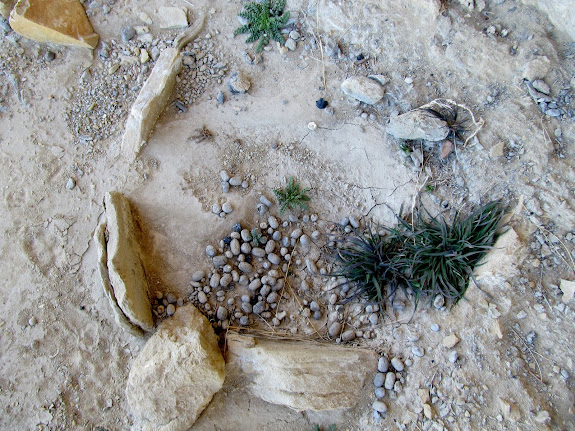 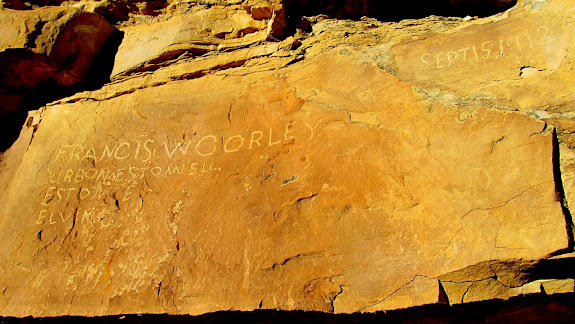 Deer on the mesa above the Carbon Golf Course 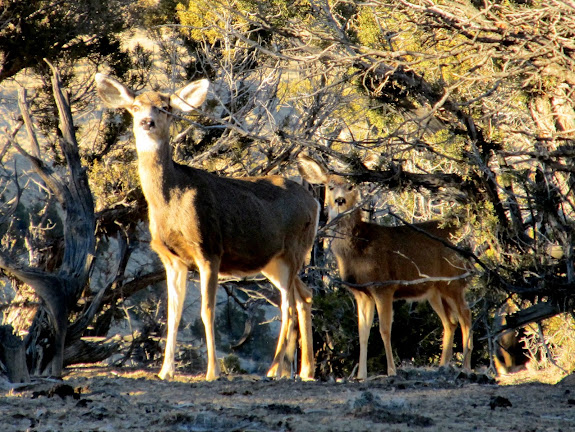 View over the golf course and the town of Spring Glen, with the Book Cliffs on the horizon 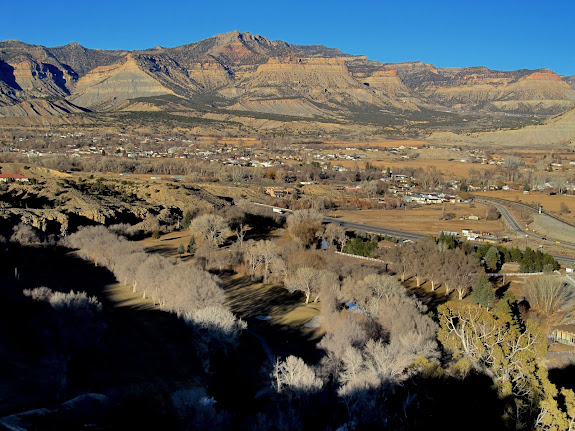