On the last day of my four-day weekend I met up with Nolan and Donna, Facebook friends who I’d never met before Monday, for a hike in the San Rafael Reef. We met in the parking lot of their motel in Green River and they hopped in the Jeep with me. We set out for the Farnsworth Canyon area to hike an old mining track up the inside of the Reef. I had previously hiked part of the mining track in 2010 for a short distance in order to gain access to a steep gully leading to the top of the San Rafael Reef, but this time we stayed on the track and followed it until it topped out on one of the lower plateaus of the Reef. Along the track we saw a lot of interesting textures in the rocks, including one wonderful boulder that held many septarian concretions.

Old mining track up the back of the San Rafael Reef 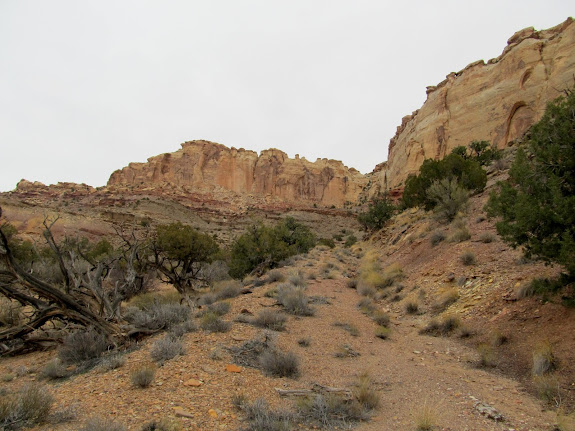 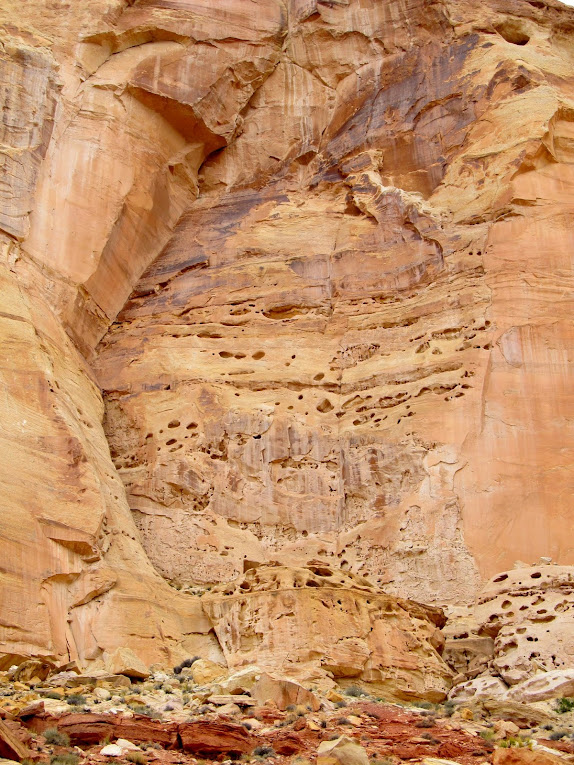 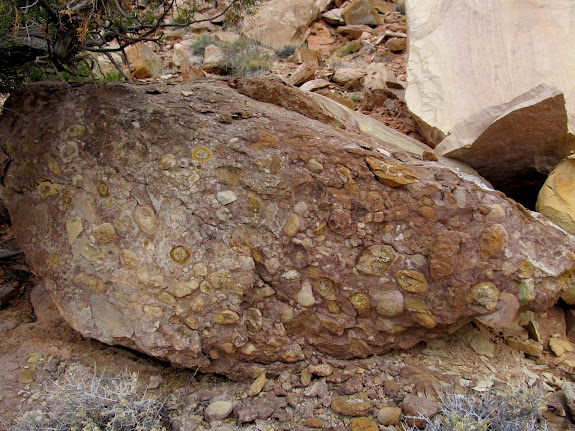 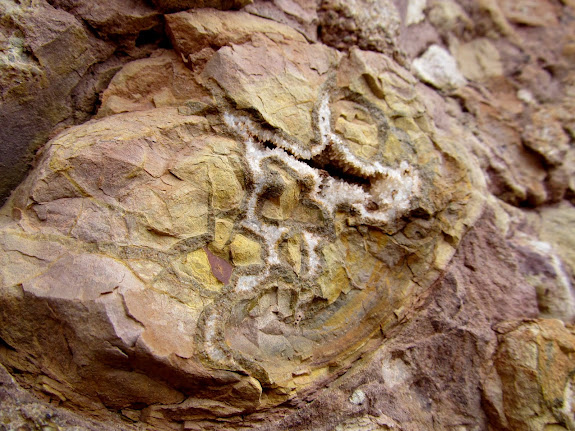 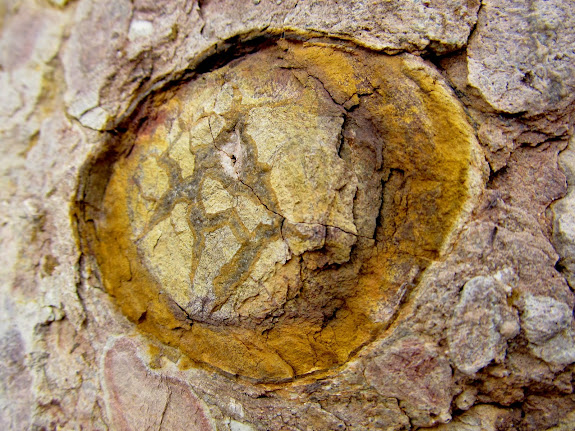 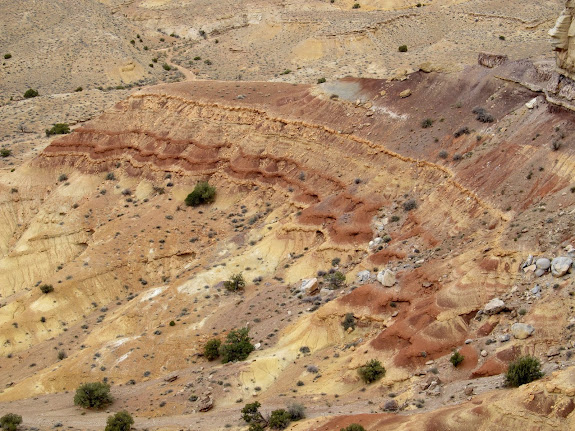 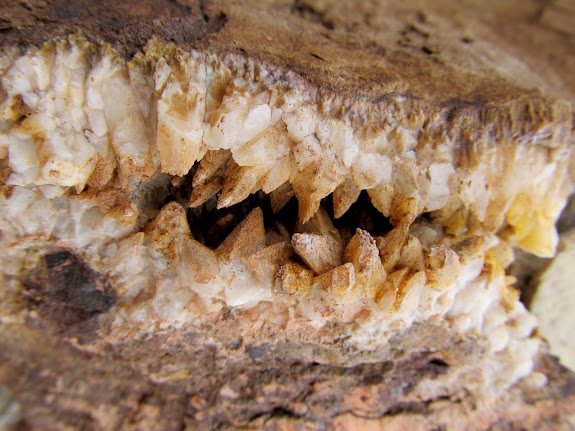 Panorama including Temple Mountain in the distance 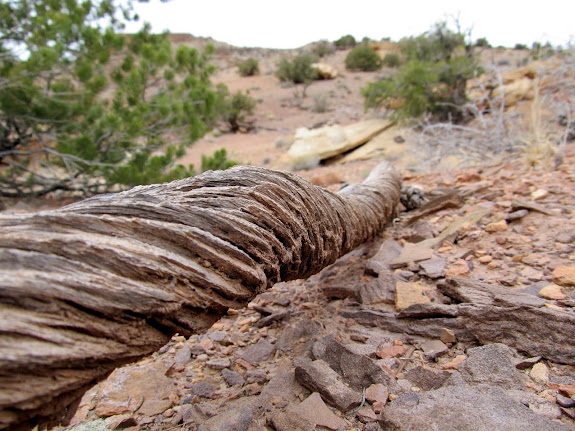 Where the old dozer road reached the top of the plateau we found rows of drill cores laid out, almost certainly done while prospecting for uranium. We also saw a lot of prominent cairns in the area, most of which hid rusty old cans containing mining claims. We checked out a few and found the papers inside very brittle. We were unable to unfold them without destroying them, so we couldn’t determine how old the claims were. There were a lot of boulders that would have made decent Indian shelters. I checked several of them out and found one with a pile of old wood stacked up and a few pieces of chert on the ground. 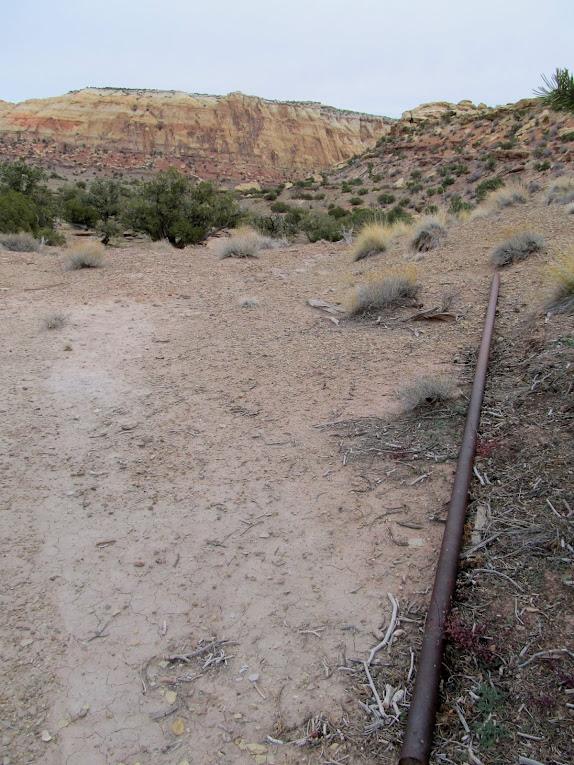 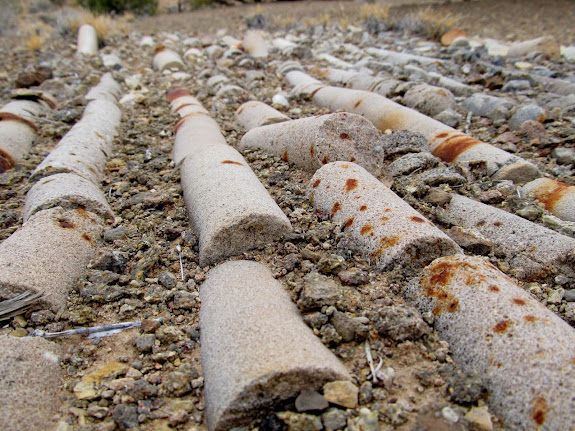 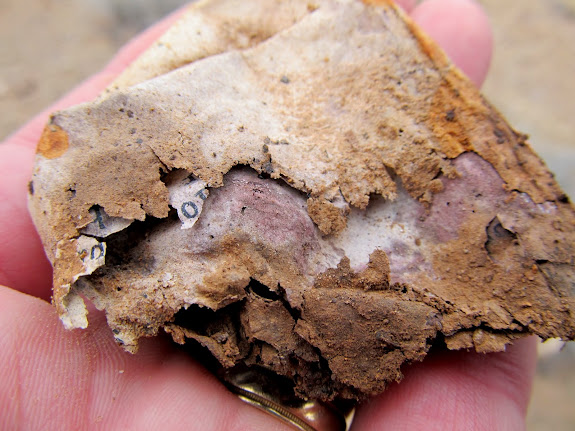 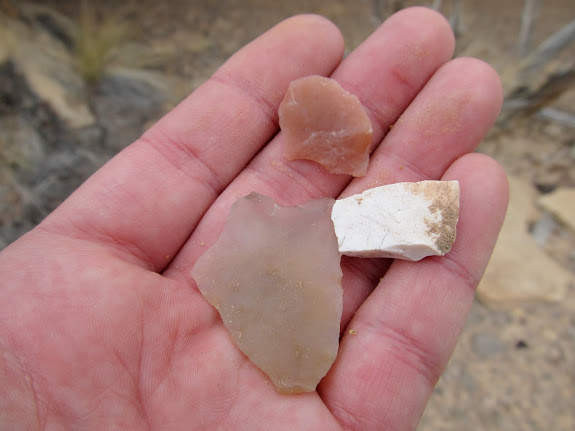 Old wood piled up under a boulder shelter. I’m unsure if this is prehistoric or done by miners. 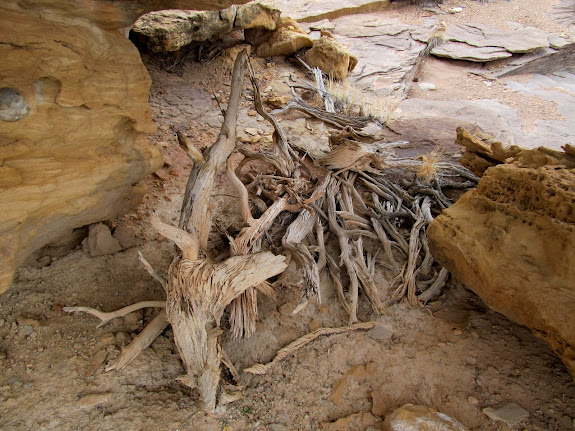 Shelter under a boulder 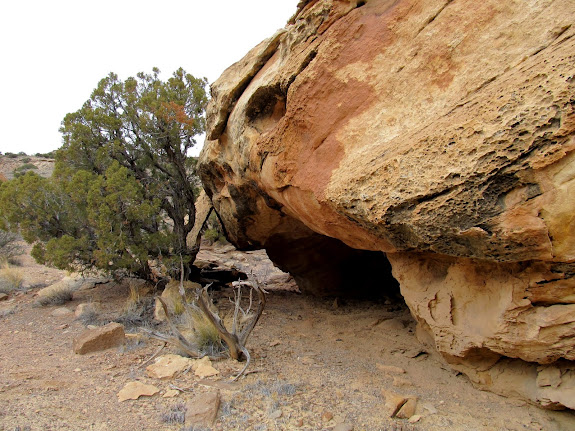 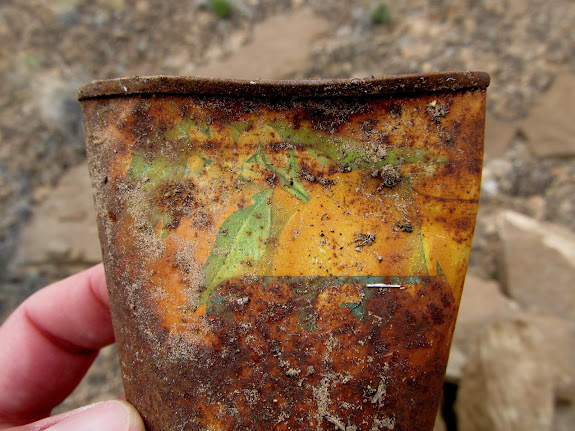 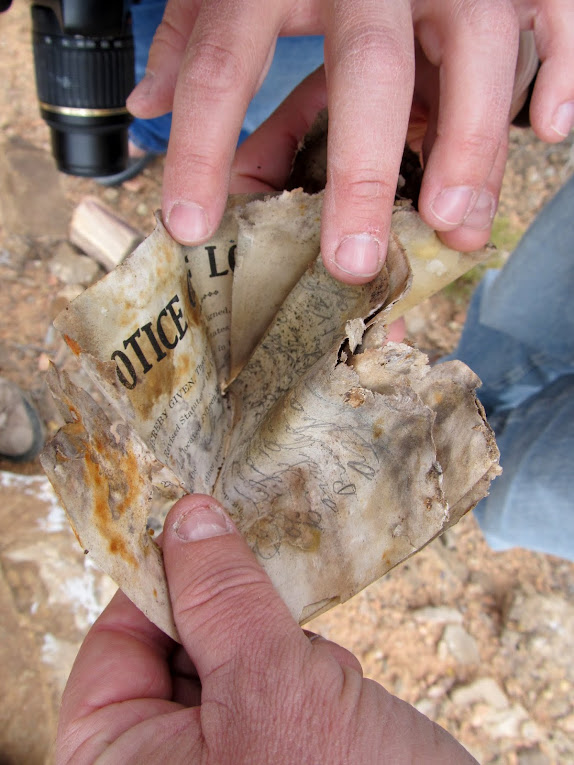 We descended a small canyon and started seeing a lot of petrified wood, at first small chunks then huge tree trunks that were tens of feet long. I scrambled around some cliffs hoping to find some new rock art but got skunked on that front. The various mining relics alone were worth the trip, however. We didn’t even follow the mining track to its end but I suspect I’ll be back to do that another day. Having had our fill of exploring and with evening approaching, we descended the mining track back to the Jeep and reached Green River just as it got dark. It was a fun experience hiking with Nolan and Donna. They saw and photographed a lot of things along the way that I would normally take for granted and just walk on by. It’s great spending time with others who have a different perspective on things.

Huge petrified tree with my foot for scale 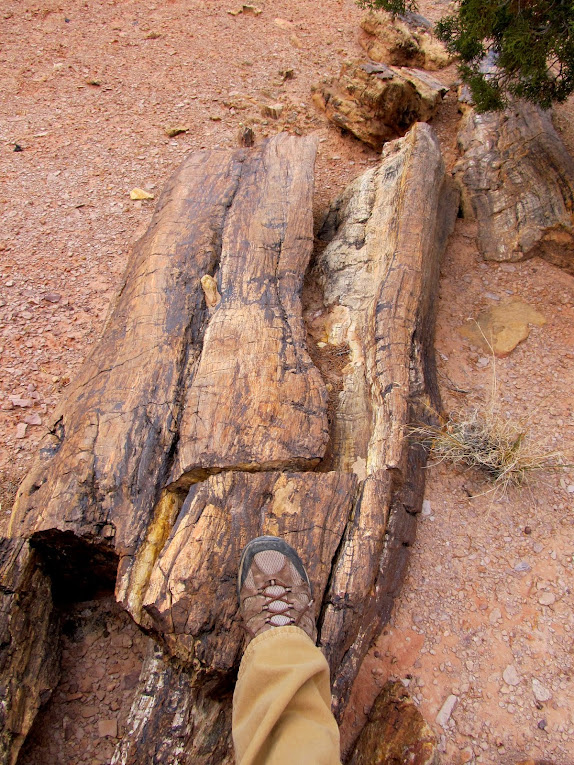 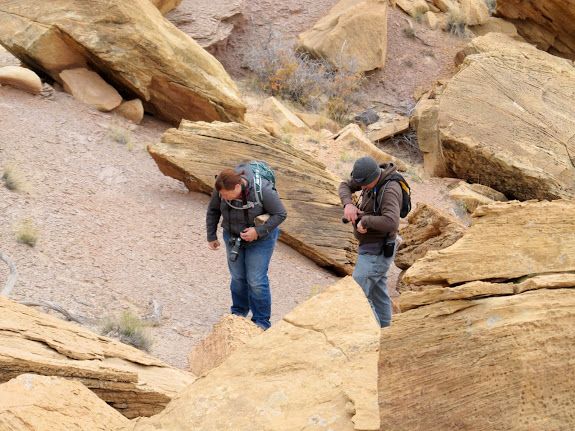 Nolan on a boulder looking for a better view 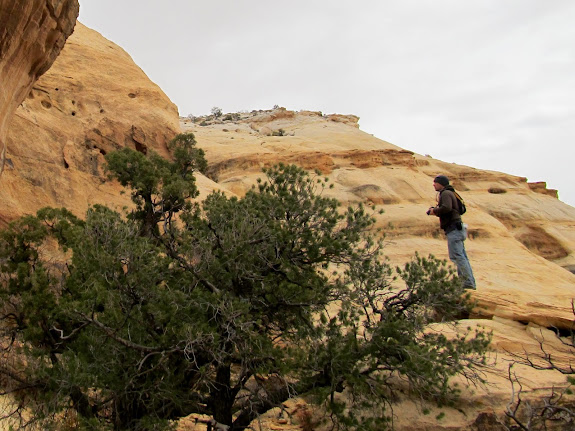 View down from halfway up the cliffs 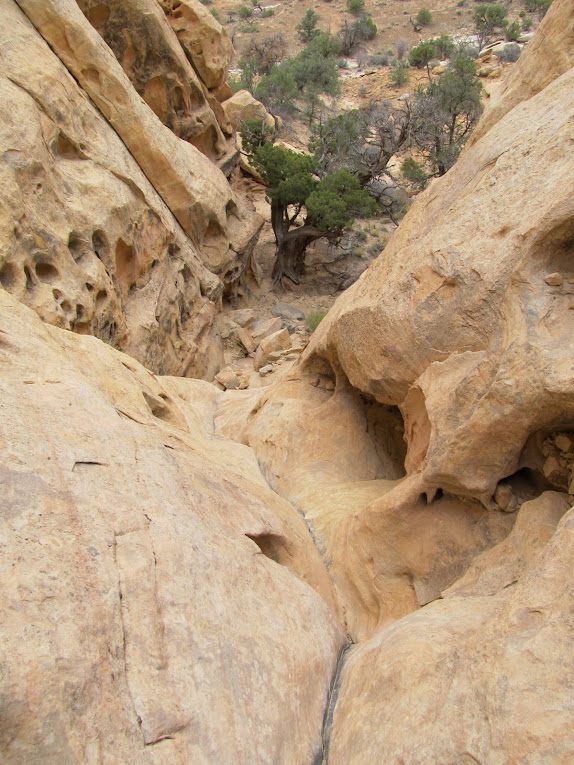 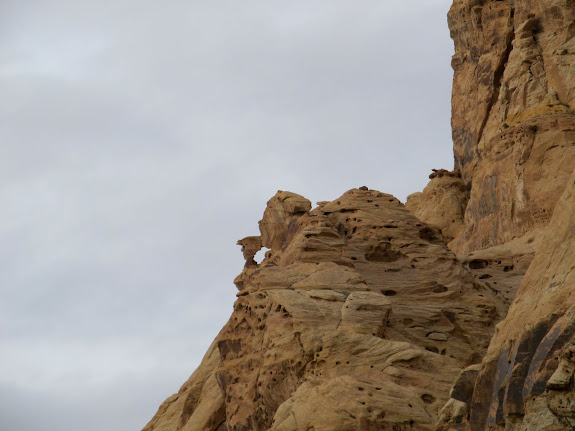 Hiking up the mining track with petrified wood littering the ground 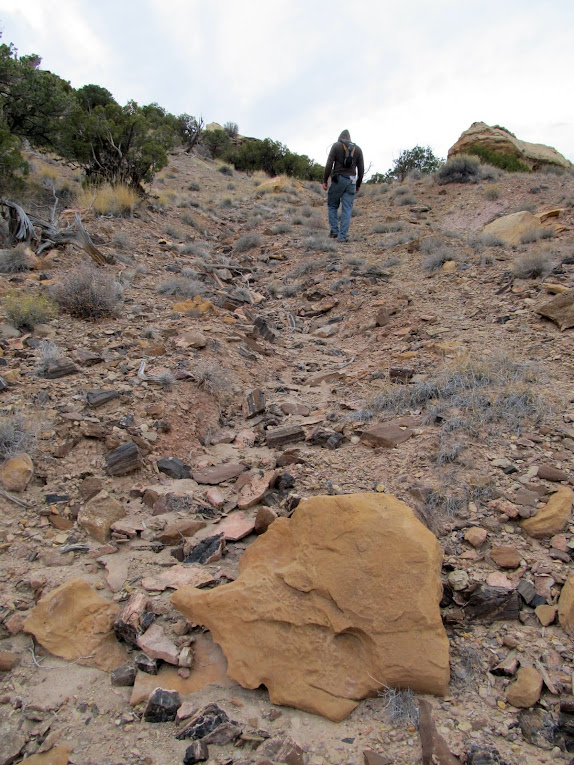 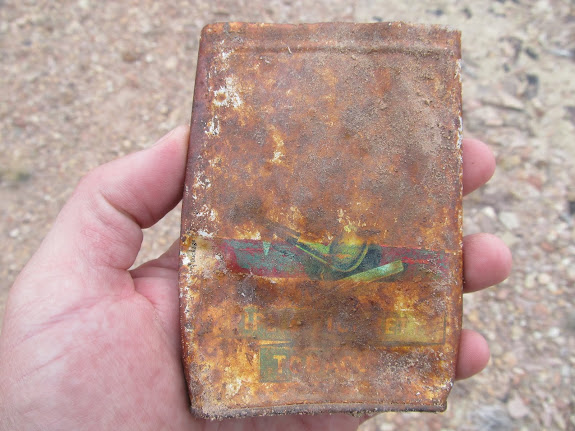 Sun and clouds over Temple Mountain

Purplish and orange layers on the mining track 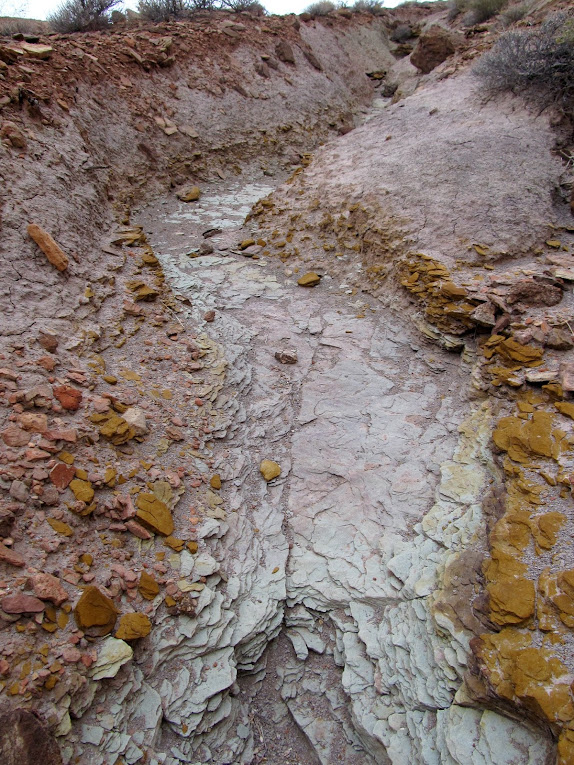