After last week’s success at unexpectedly finding some rock art in the northern San Rafael Reef, I returned on Friday and hiked four canyons hoping to duplicate that success. I’ll save you the suspense of reading to the end–I struck out. I’ve always felt that if one spent enough time in any small area of the San Rafael Swell, and particularly the Reef, that there would be some signs of prehistoric habitation to be found. That’s not to say my search this week was exhaustive–there were some cliff bands that I would have liked checking out but didn’t due to the short amount of daylight available this time of year–but I checked all the usual places you’d expect to find rock art and/or lithics, but came up completely empty. It was still a worthwhile day off work. I got some exercise, saw some bighorn sheep on the drive in, and saw a fox and a very low-flying helicopter while hiking. 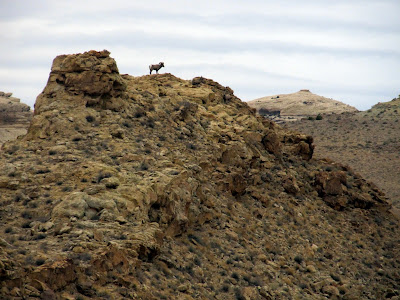 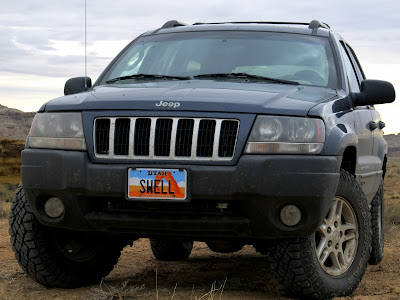 I started out in a canyon a mile north of where I hiked the previous weekend. I chose the area because there were four canyons relatively close together that all ran east-west, and judging from the satellite imagery in Google Earth, it would be easy to connect together a route running up and down all four canyons. I saw an interesting natural arch in the first canyon, but that’s about it. There were a few water-filled potholes and a giant cottonwood tree that had fallen across the canyon. To get over to canyon #2, I followed a crack along a long fault line that runs for about six miles north-south across several canyons in the area. I was surprised to see a cairn in the pass between the canyons, and even more surprised that there was moss/lichen growing between the rocks in the cairn, indicating that it was likely quite old. 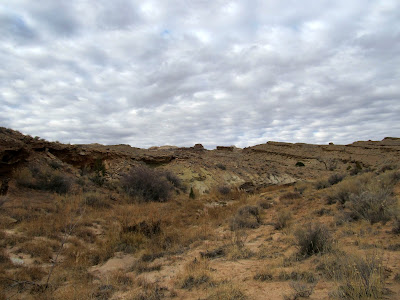 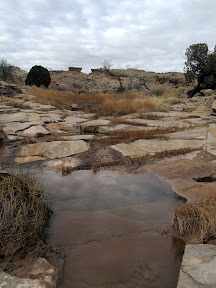 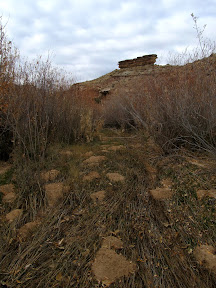 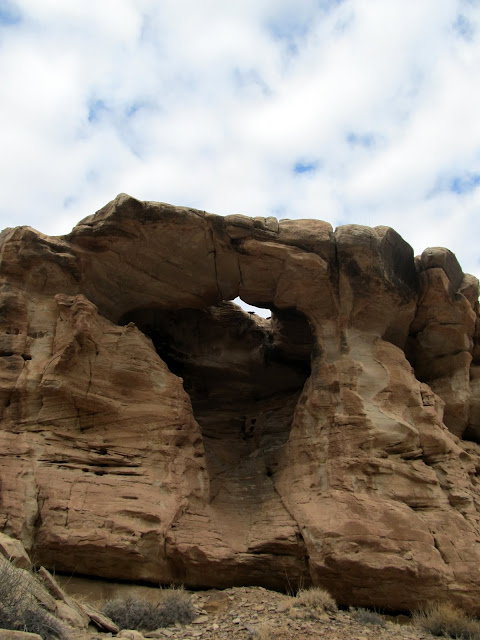 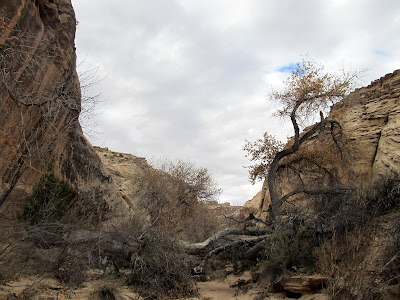 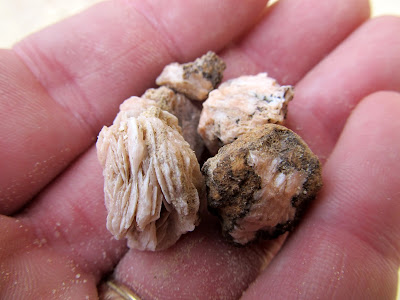 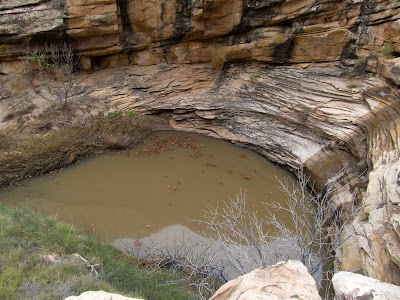 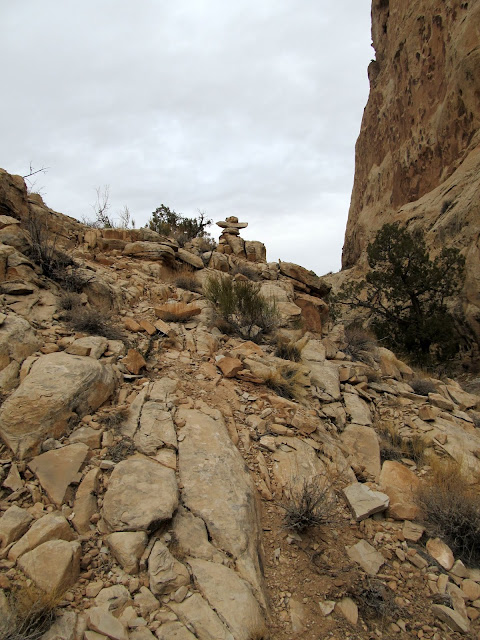 In the second canyon, I saw a fox that I probably wouldn’t have seen if it weren’t for Torrey pointing it out. There was also a small natural arch just above the Navajo Sandstone layer not far above where I’d seen the arch in canyon #1. I heard what at first sounded like an airplane, but realized too late that it was a very low-flying helicopter in the valley that flew right over my Jeep about 200′ off the deck. I was too slow to get a photo of it, and even now I wonder what it was doing there. I crossed over to canyon #3 just outside of the San Rafael Reef on a cattle trail. In the third canyon I checked out a few places that held promise for rock art, but there was nothing there. I sat on a small boulder where Torrey and I ate lunch, then we moved upward and continued our exploration. 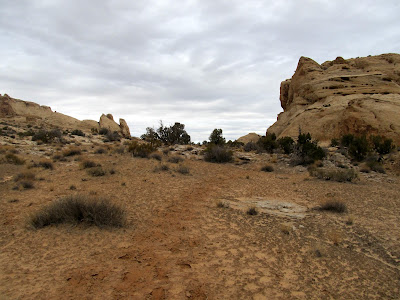 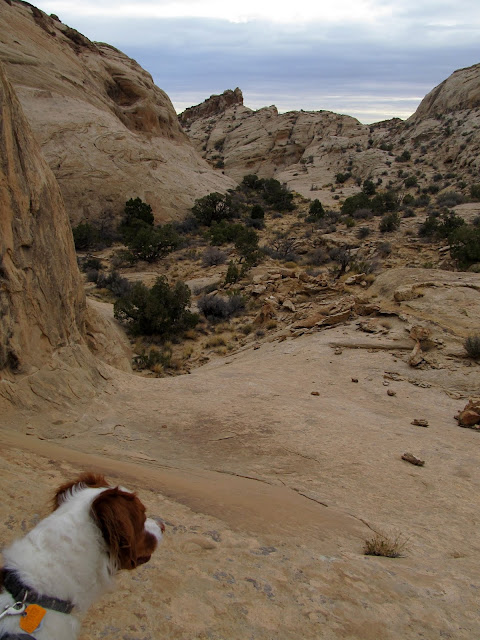 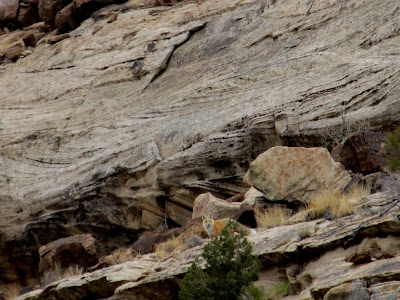 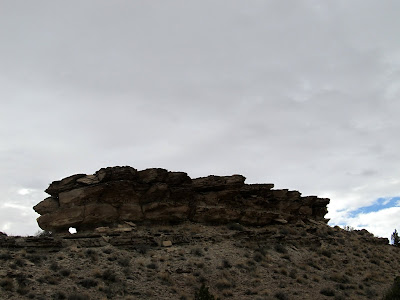 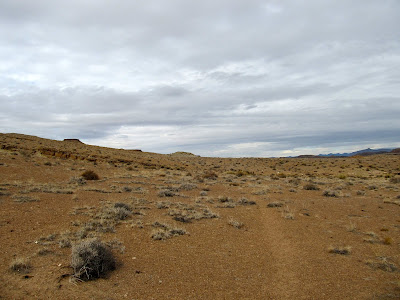 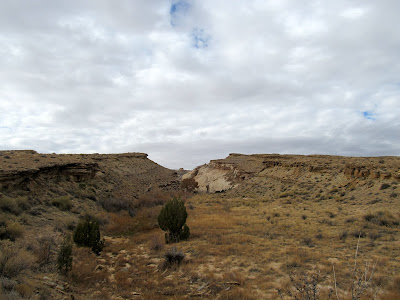 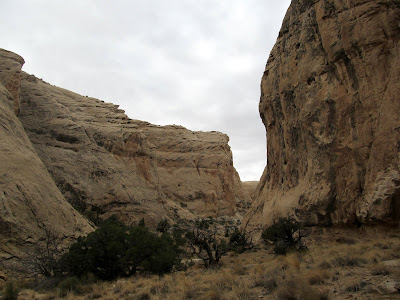 While crossing over to the fourth canyon I was nervous about whether I could make it. Earlier I’d scrambled up to the divide between canyons #2 and #3 to have a peek and the route between #3 and #4 looked dicey. In reality it was pretty easy. I found the route to be well-traveled by some sort of animal–the tracks were indistinct, but they were heavy enough to have been made by cattle. It would be surprising to see them this high up in the Reef, but not entirely impossible. By the time I started down canyon #4 the sun made an appearance and I saw my shadow for the first time during the hike. The fourth canyon held many large potholes that I had to scramble around. I reached the lower end of the canyon, surprised that I made it that far without having to completely exit the canyon and walk down the flat part of the Reef. From there, it was an easy walk down Tidwell Draw back to where the Jeep was parked. It had been a disappointing day as far as my intentions were concerned, but otherwise the canyons made for a good six-mile hike through an area where apparently few tread. 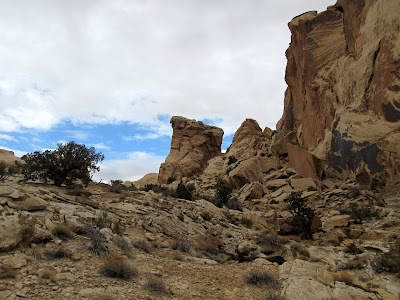 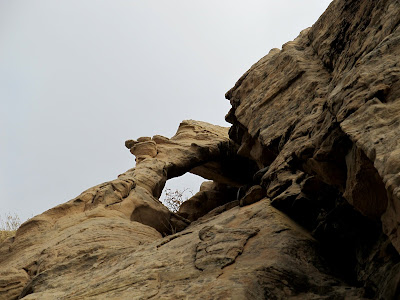 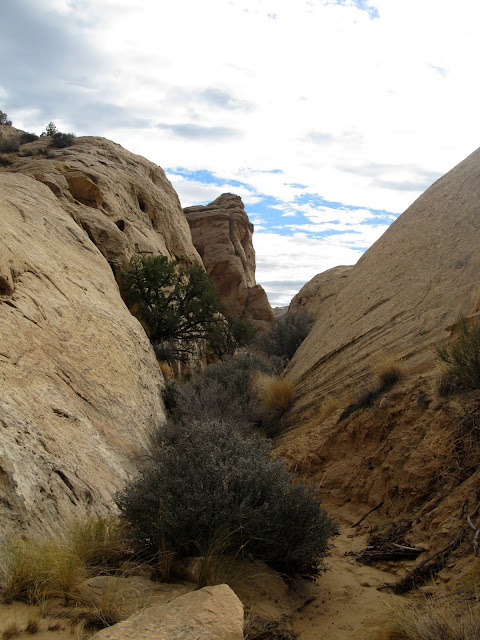 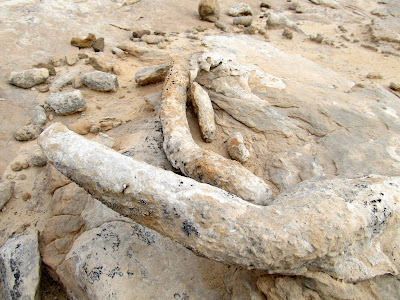 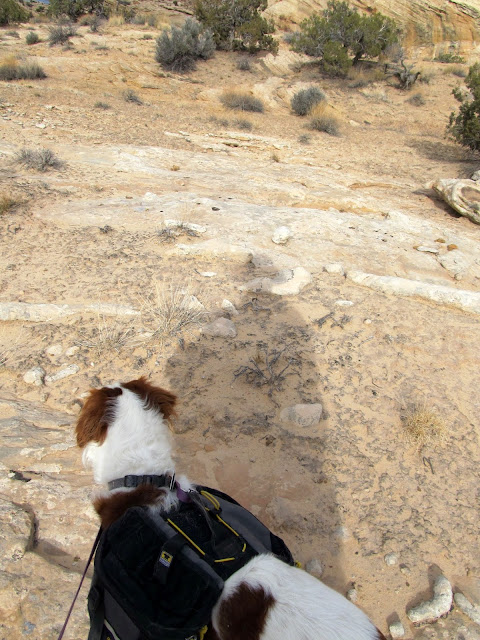 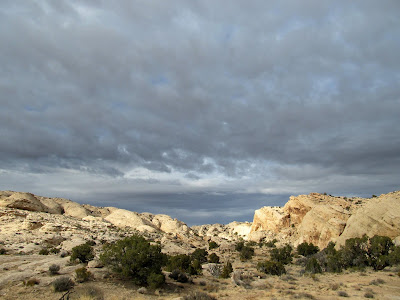 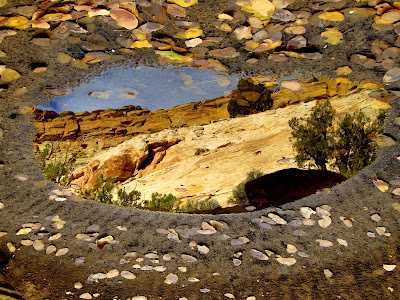 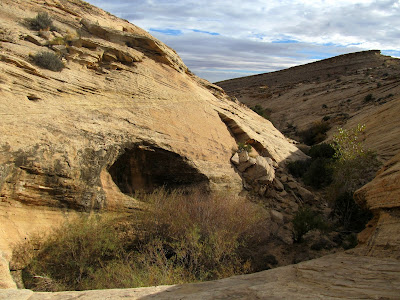 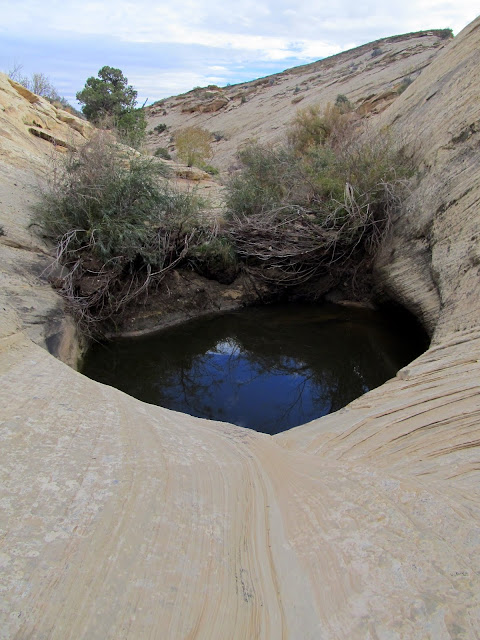 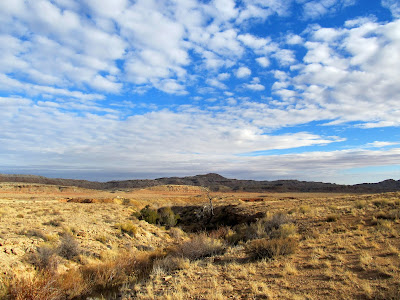 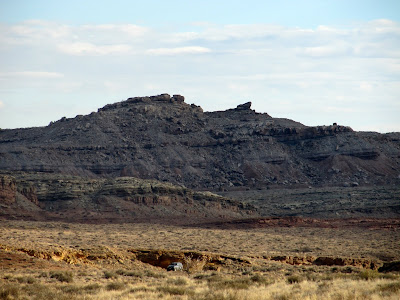