We’ve owned our old Layton camp trailer for six years, and with the kids getting bigger and now having ATVs that we need to haul when we go camping, it was finally time to replace it with something more suitable for our family: 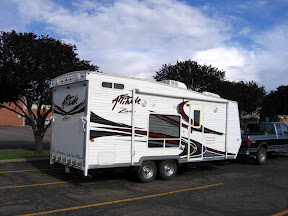 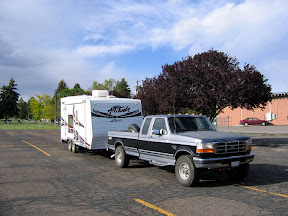 Traci’s uncle had this sitting at his used car lot in Helper, and though I’d actually stopped to look at it once, I didn’t think it would be within my budget so I didn’t even inquire about it. However, Traci did stop to ask about the price the other day, and although it was more than we were looking to spend, it’s only a year old which allowed us to get a longer loan term and keep our monthly payments low. We’re planning on dumping money toward the loan to pay it off early.
The only downside is that it’s six feet longer than my old trailer, and I’m not sure I’ll be able to back it into the driveway. It’s parked at Traci’s parents’ house for now, until I get the nerve up to try parking it at home. I’ll likely have to block traffic for a short while, and I’m worried about hitting the tree that’s one foot from the edge of my driveway entrance, and I really don’t want to drop the tires off into the gutter. Other than that, it shouldn’t be a big deal.