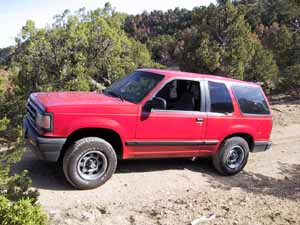 We bought this today from Traci’s dad. We needed a dependable vehicle so badly that he was willing to sell it to us, even though he only bought it two months ago. He gave it to us for what he paid for it, but it was still way below blue book value–one of the perks of having a used car salesman in the family. It’s got a few very minor problems, mostly cosmetic, but nothing that’s going to keep us from driving it. Anywho, it’s a 1992 Mazda Navajo (AKA Ford Explorer), 4.0L V6, 5-speed transmission, push-button 4WD, 105,000 miles, and it’s in really, really good shape. In fact, it’s the nicest vehicle we’ve owned since we had the Toyota, but hopefully Traci will keep it that way (ahem).
We’ve actually still got the 31×10.5″ tires that used to be on that Toyota, with only 400 or so miles on them, so I’m going to try and stuff them under the Mazda. They’re not really that much taller than what’s already on there, but they’re quite a bit wider. I may have to get some new rims with a different offset to make the tires fit without rubbing, but I’ve got a set of 6-lug alloy rims that I can probably trade for a set of comparable 5-lugs.
I’m probably not going to do a lot of 4-wheeling in the Mazda, but I’m still gonna finish fixing my Subaru, so I’ll be able to beat the shit out of that car still. I should easily be done putting the transmission in on Saturday (I haven’t worked on it at all since last weekend), then I’ll take my time swapping out front suspension parts, since I don’t have as much experience with that.