Early in February I traveled to New York City for a work conference. It was a week of firsts for me: my first time traveling by air solo, my first time this far east (previously it had been Rapid City, South Dakota), and, surprisingly, my first time drinking in a bar. I’d driven to Salt Lake City and arrived at the airport two hours before my scheduled departure as recommended by the TSA. However, it took less than 10 minutes to check my bag and get through security, leaving me with a long wait before my flight. As the departure time neared, an announcement came that the flight was overbooked and they were asking for volunteers to take a later flight. Several more such announcements came and nobody volunteered. Then, I heard my name called over the PA. I approached the gate desk and was informed that United could put me on a later direct flight and still get me to Newark at roughly the same time my original flight (with a connection in Denver) would have arrived. So, I took the later flight and settled in for a couple more hours. 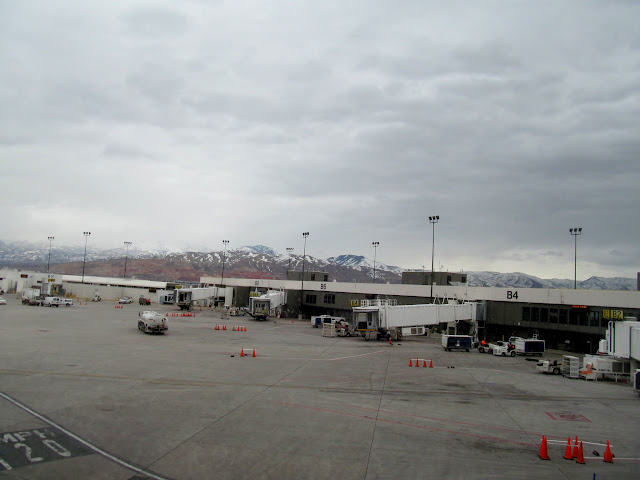 After a long day of traveling (and much waiting while I read a book), I arrived at Newark and took a cab to the Hilton New York Fashion District. I just had time to stash my suitcase in my room before walking to the Old Town Bar where I met a few co-workers for a late dinner and a couple of beers. We got to know each other for a couple of hours before retiring to our respective hotels.

Taxi cab in the Lincoln Tunnel 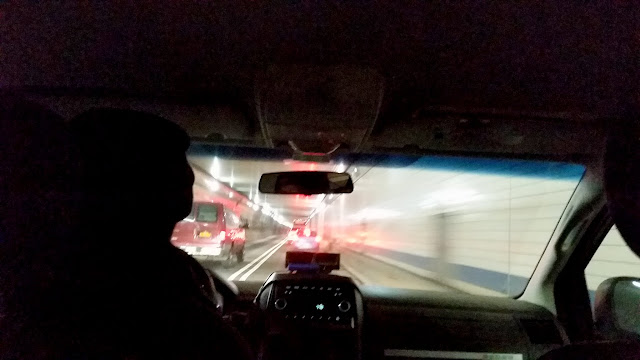 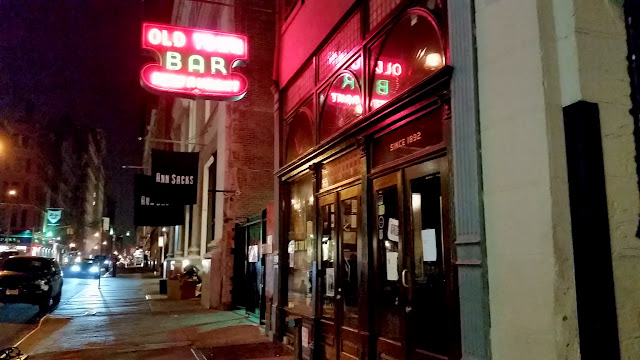 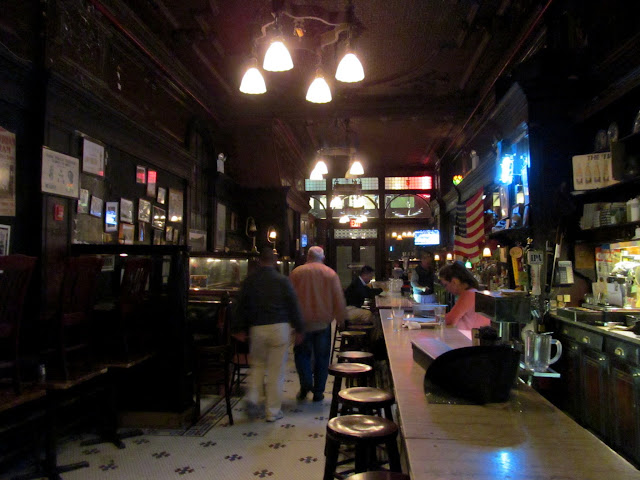 View from the 18th floor of the Hilton, Empire State Building on the right I walked to and from work the next day. I had some time after work to walk the city and buy some souvenirs for my family before meeting a larger group from work for dinner at Markt, a Belgian restaurant. I opened with an Ommegang Abbey Ale and then ordered grilled salmon for dinner. A few of us then returned to the Old Town Bar for a few drinks before turning in a little late.

Leaving the hotel and walking to work 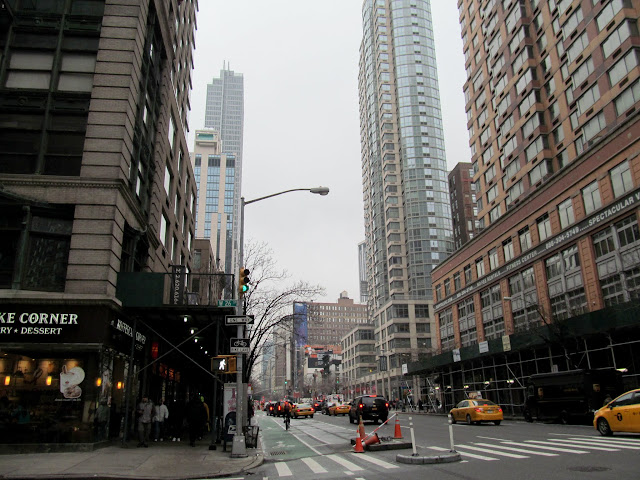 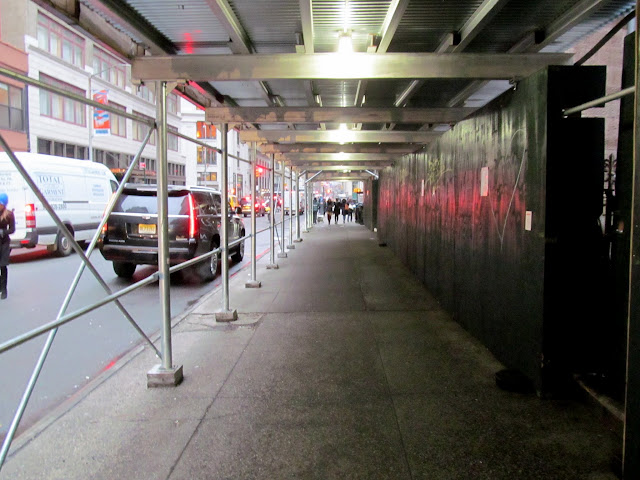 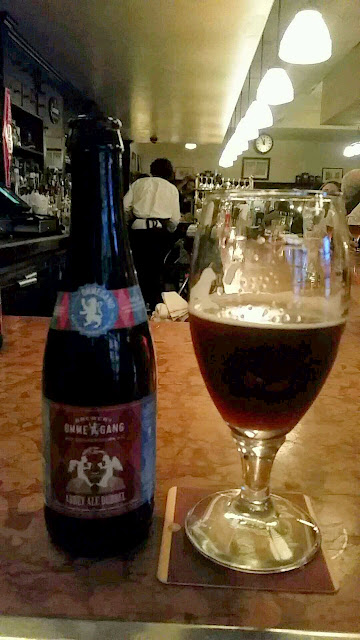 Back at the Old Town 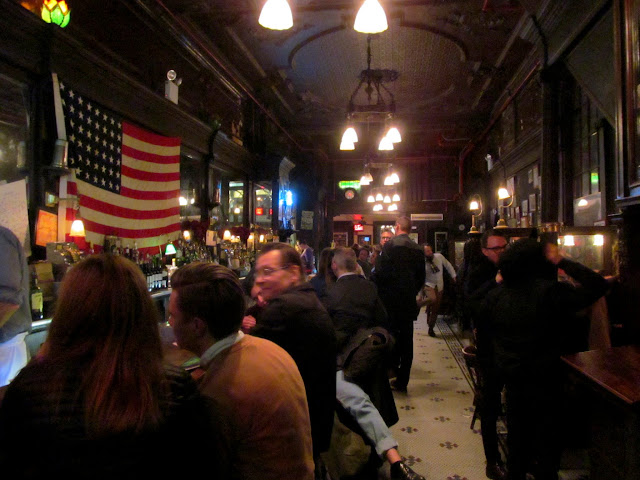 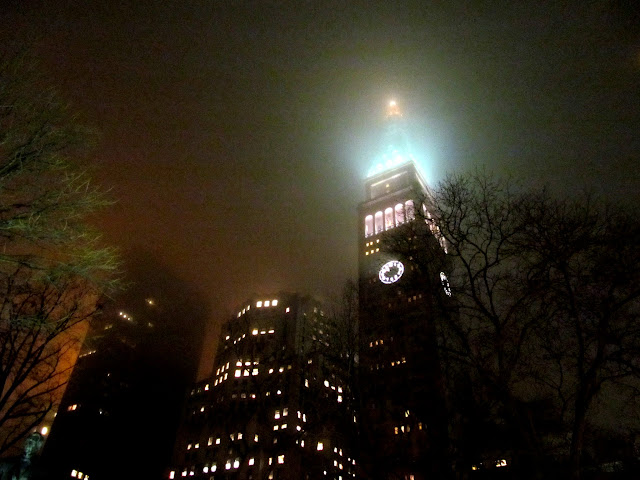 The following day at work was a short one. That afternoon I wandered the city a little more and then walked the entirety of the High Line, a former elevated rail line turned into a public park. I felt more like a tourist along the High Line than in other parts of the city where it’s easier to blend in.

More views from the hotel 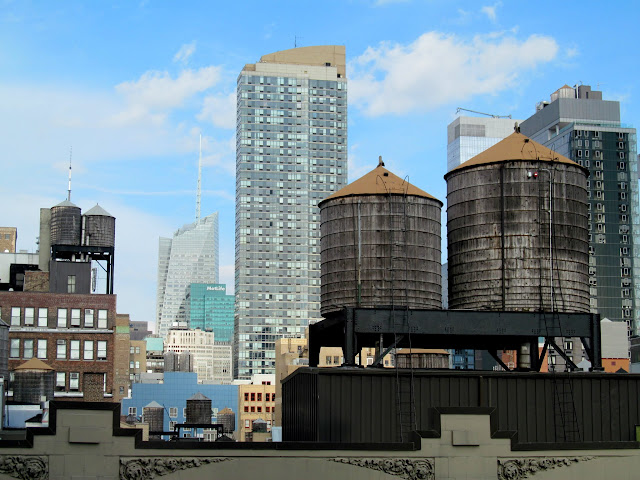 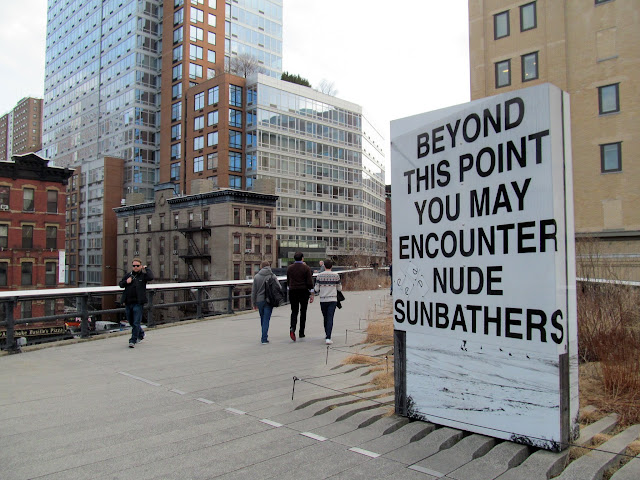 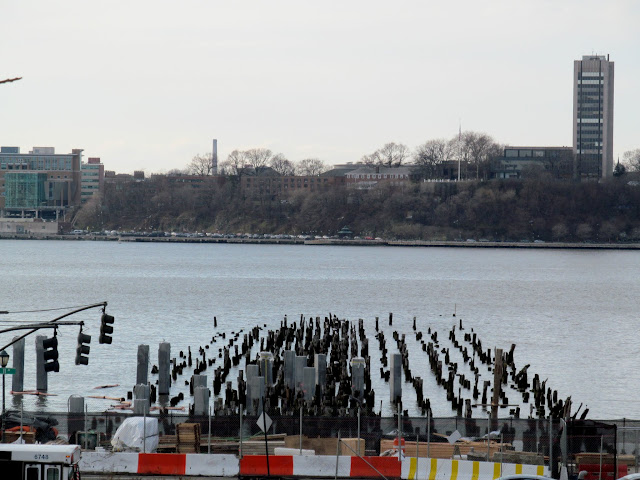 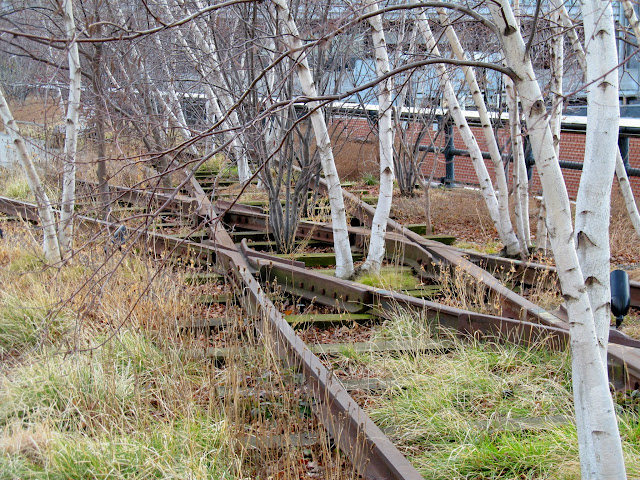 Gansevoort Street at the south end of the High Line 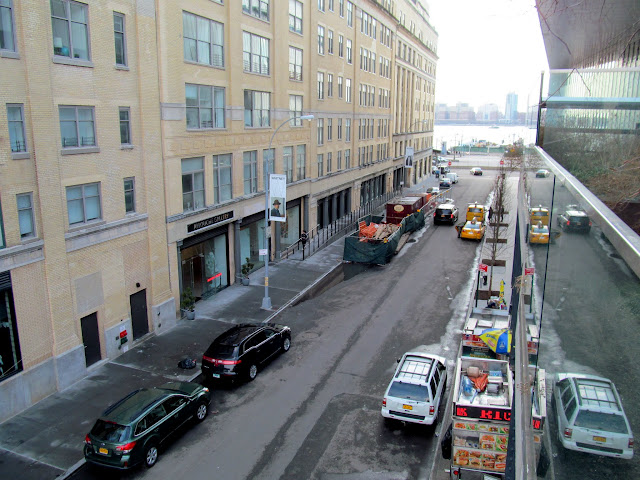 View from south end of the High Line 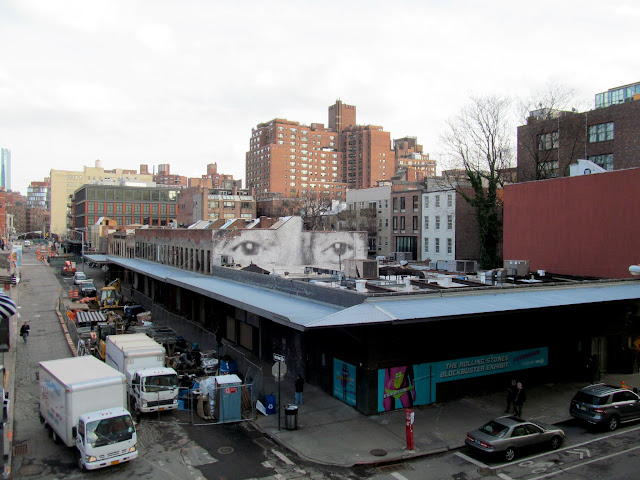 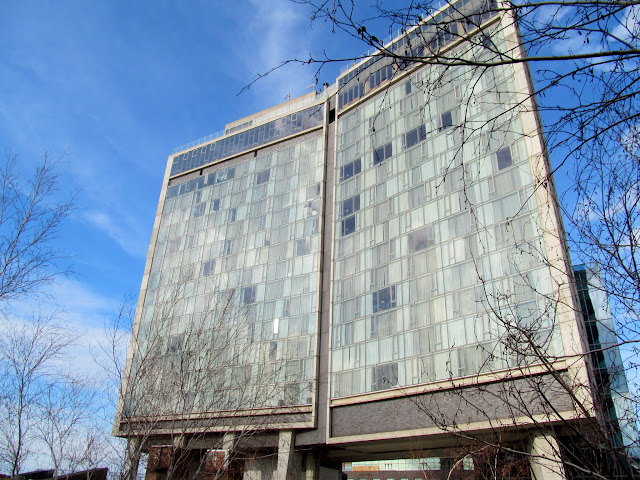 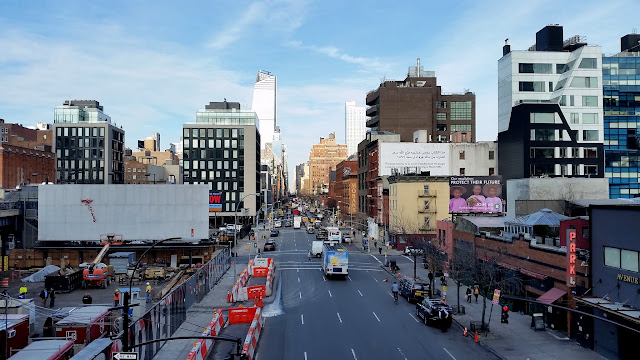 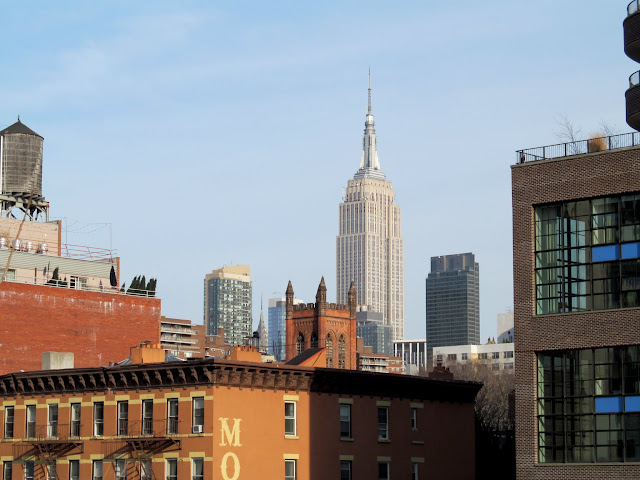 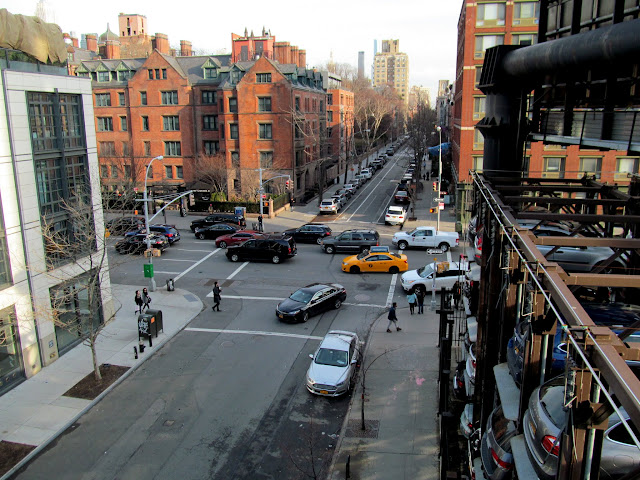 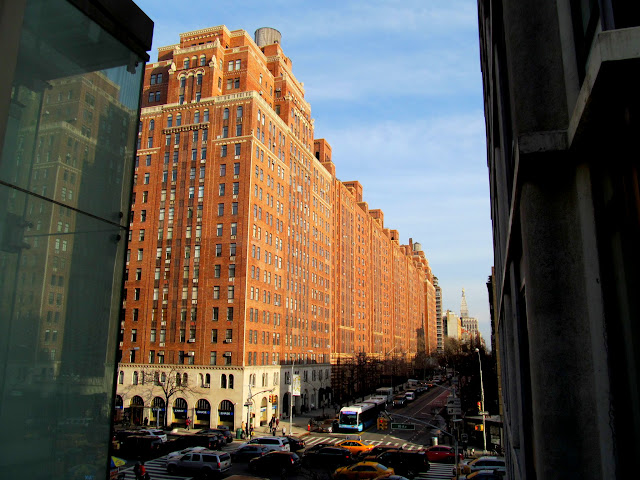 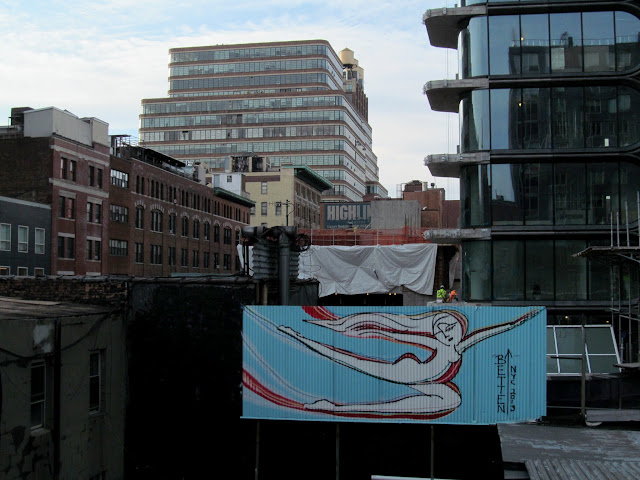 Curve near the Hudson River 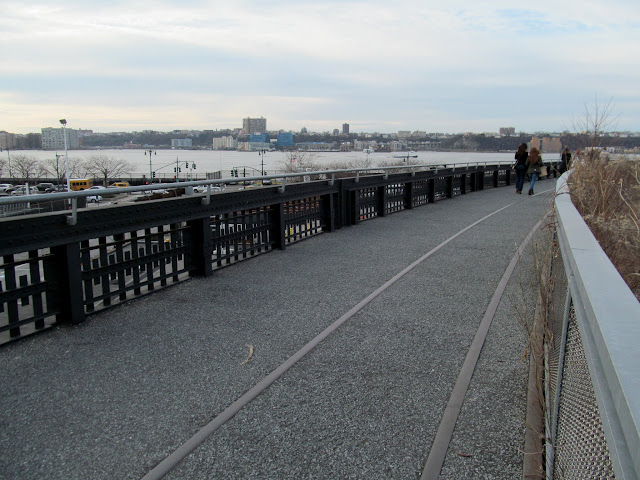 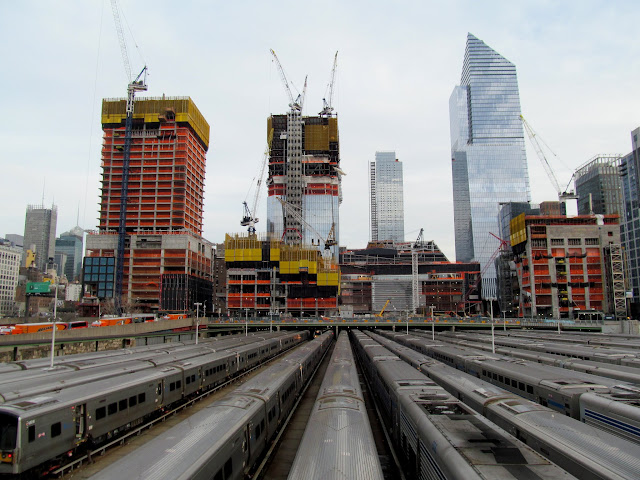 A co-worker and I were planning on riding the train together to the airport the following morning, so I’d planned on stopping at Penn Station to buy a train ticket on my way back to the hotel. As soon as I got to the station, I got a text on my phone from United saying that my flight had been cancelled due to a snowstorm that was supposed to hit in the morning. Fuuuuuuuuuuuck. I quickly walked to my hotel and called United since their website wasn’t offering any flights out until two days later. It turns out that United cancelled all flights out of Newark on Thursday. After an hour and a half on hold, I talked to a rep who managed to book me a direct flight from JFK to SLC with Delta early the next morning. Finally I could relax after regaining some certainty about returning home on time, and I ate a burger and enjoyed some beer at the hotel’s restaurant. 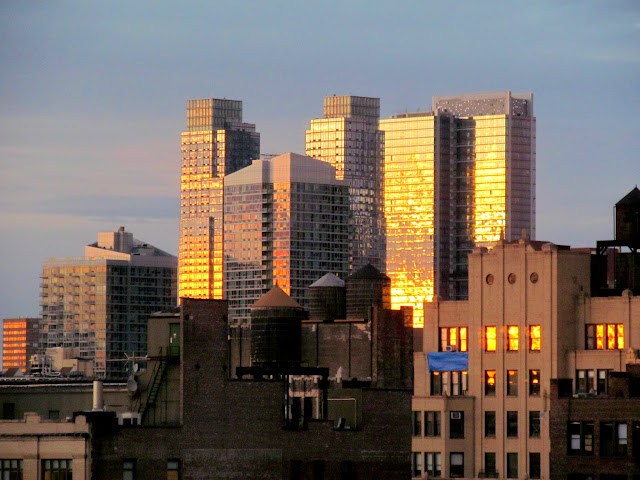 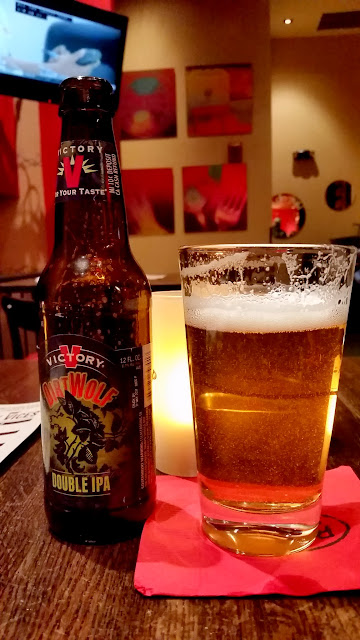 My co-worker got rebooked on a flight to SFO departing about the same time as mine, so we shared a cab to the airport on Thursday morning. It was snowing heavily when we reached the airport and I was nervous that my flight would be cancelled. Boarding the plane was a slight relief from my anxiousness. After 15 minutes of de-icing and then waiting for the runway to be plowed, we took off. A few hours in the air and I was finally back on familiar ground, driving my Jeep home.