On the third and final day of my trip in the southern Horseshoe Canyon area, four of the group–Alan, Wade, Paul, and I–hiked to Cowboy Cave. The cave, and its neighboring cave, Walter’s Cave, was excavated in 1975 and found to contain a mammoth dung layer from the late Pleistocene, along with human cultural artifacts dating back several thousand years (to, like, 7,000 B.C.!). Some good reading materials about the cave can be found here: Cowboy Cave Revisited, and Early Archaic Clay Figurines (pp. 31-34). We were able to drive quite close to the cave and so I was relieved that our hike would be relatively short. After the previous day’s 15-miler, I wasn’t sure I could handle more than a few miles. During the drive we stopped at an old corral on Hans Flats which which was made of fallen juniper trees that had been dragged together to form a large circle. From our eventual parking spot we looked over the land and decided upon the best route to Cowboy Cave. The hike was relatively level until we reached the edge of the small canyon in which the cave lies, then we scrambled down some ledges just opposite the cave.

Natural arch on the rim of Horseshoe Canyon 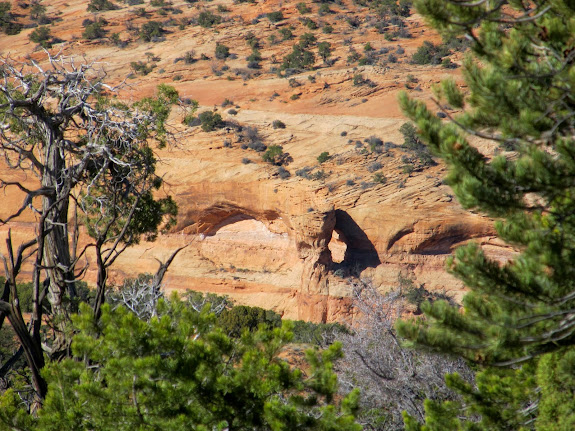 View close to the parking spot toward Cowboy Cave 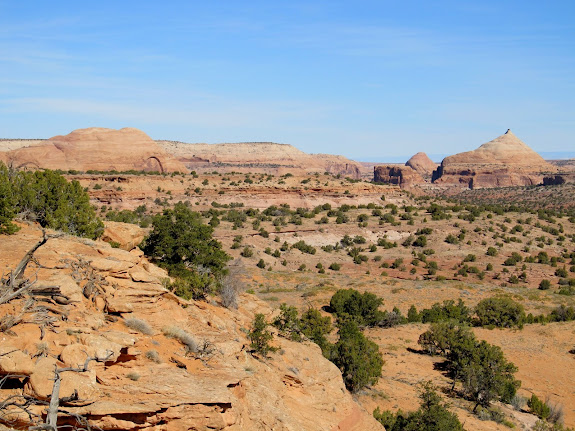 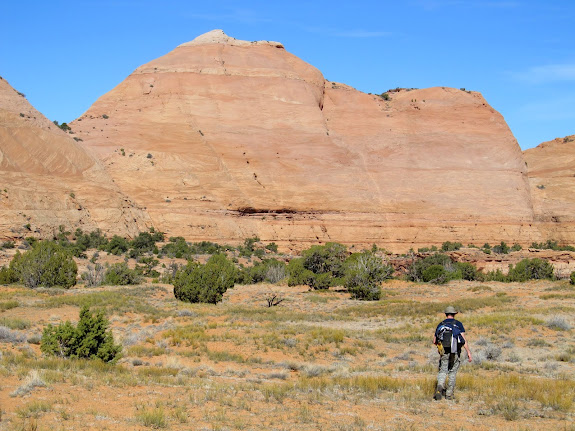 Paul standing above the canyon 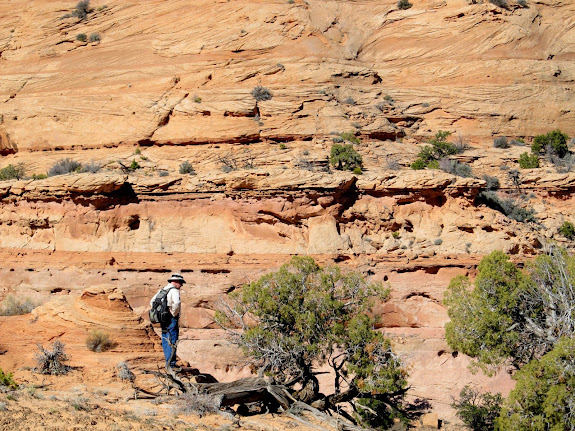 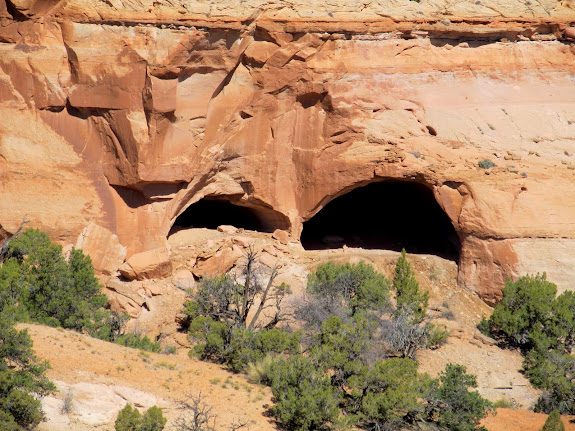 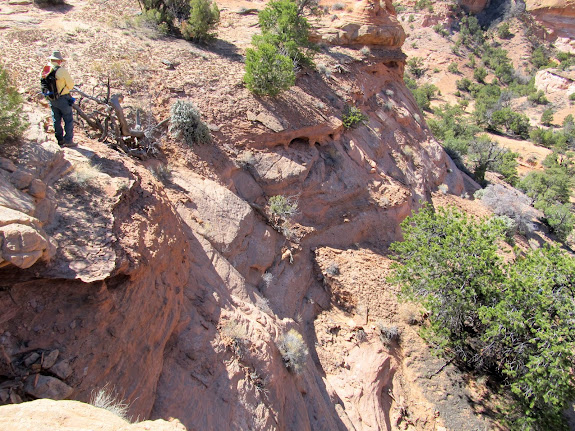 There’s really not much left at Cowboy Cave. The archaeologists cleaned the place out. There were, however, some faint pictographs and a couple of petroglyphs, along with quite a few cowboy inscriptions. There were also a lot of inscriptions that had been rubbed out–I’m not sure by whom, but there were many spots that were sanded smooth with a few grooves still showing through. I was surprised to find a couple of grinding stones left behind. 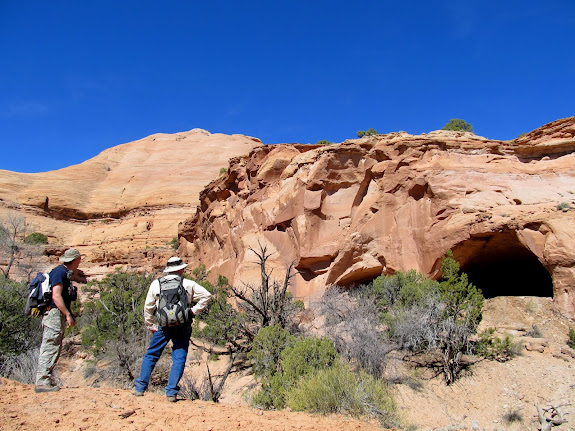 Inside the smaller of the caves 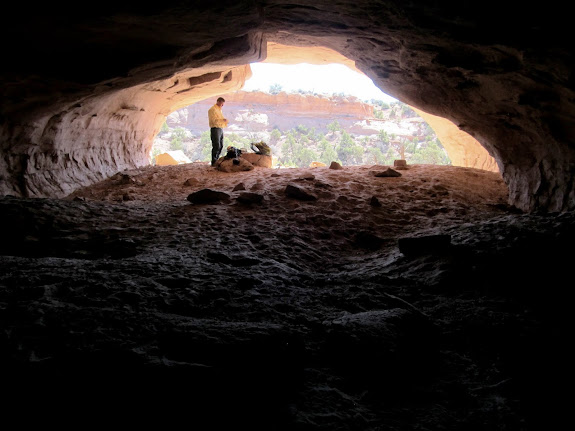 Lorin Wilson inscription, of which there were many, dating back to 1925 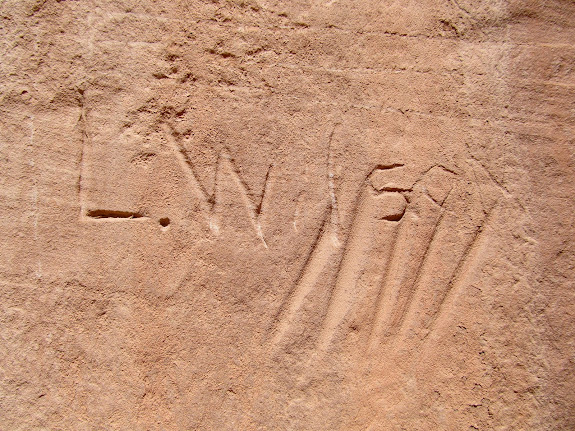 Pictograph in the larger cave 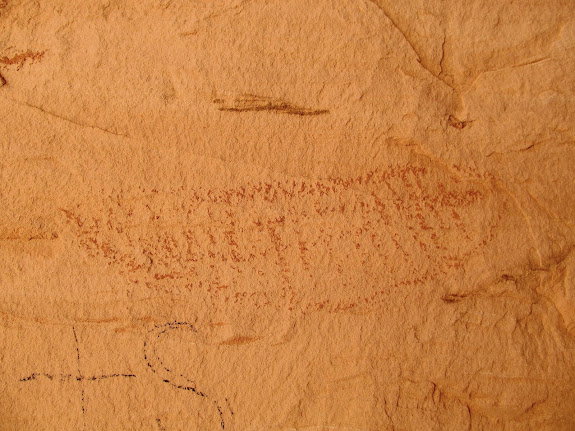 Petroglyph in the larger cave 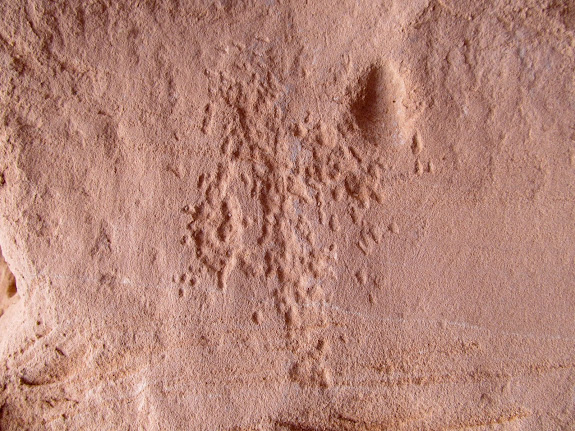 Inside the larger cave

Grinding stone in the large cave 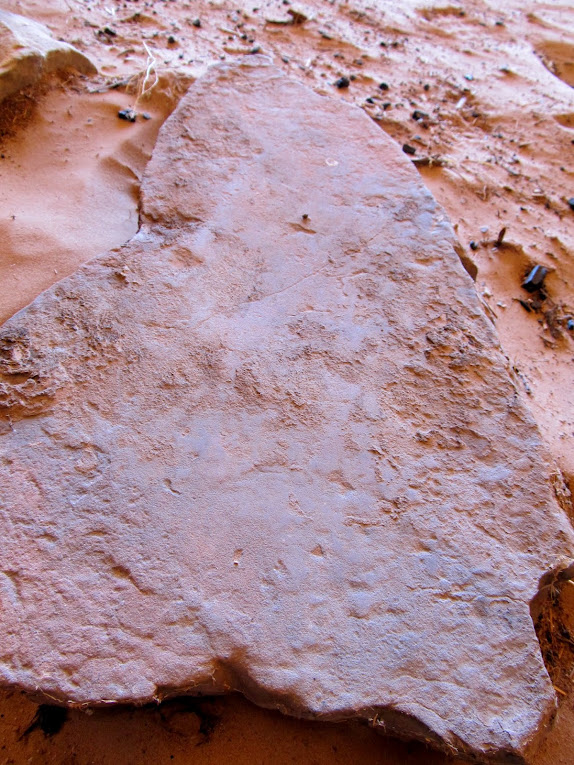 Petroglyph above the caves 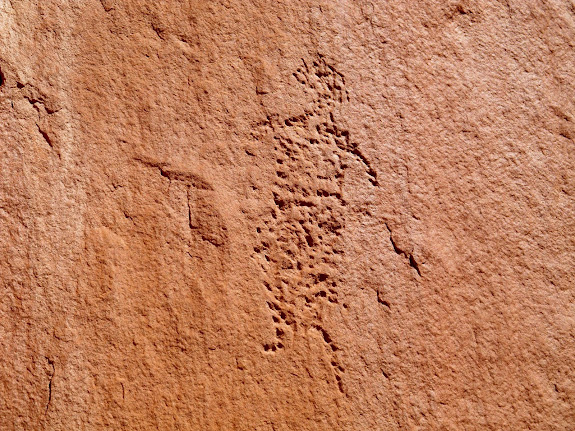 Grinding stone outside the caves 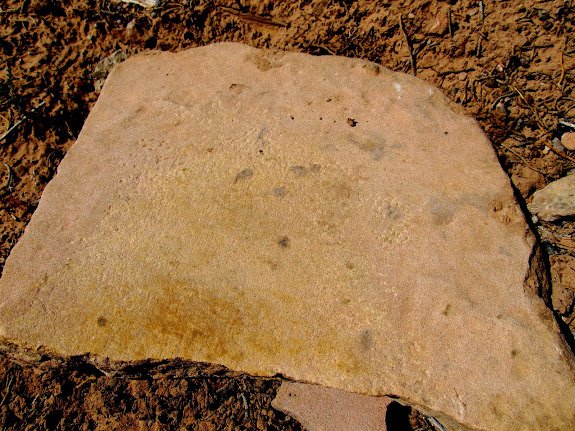 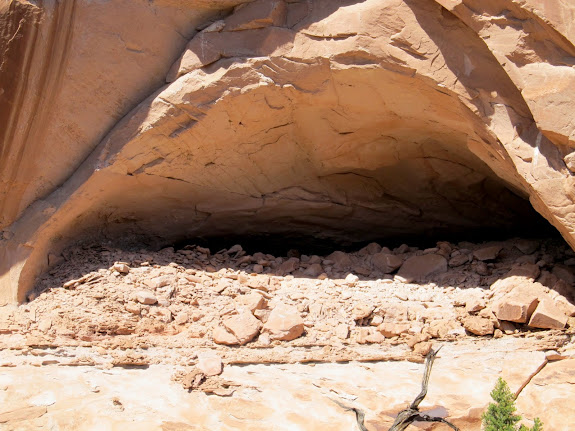 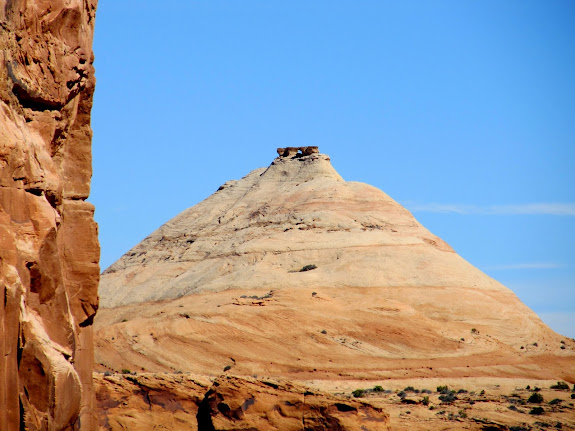 After we saw what little there was left to see, we stopped for snack at a spring in the wash below the cave. We climbed out using a slightly different route, along a horse trail that looks like it sees somewhat frequent use. During the hike back to the Jeep we were surprised by a family of wild burros. We’d seen signs of them throughout the weekend–well-worn trails and piles of dung–but this was our first sighting. We observed them for a while, and they stared back unconcernedly at us. Once we hit the Jeep it was a quick jaunt back to camp where we finished packing up and headed home.

Spring (mostly frozen) in the drainge below Cowboy Cave 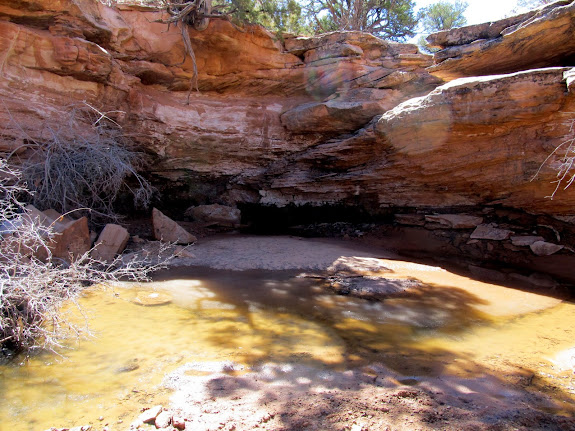 Climbing out on a horse trail 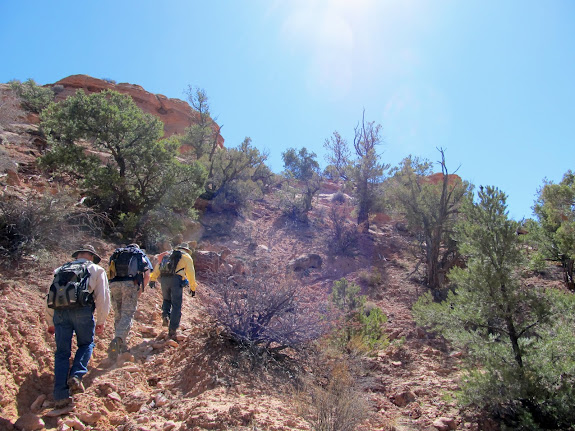 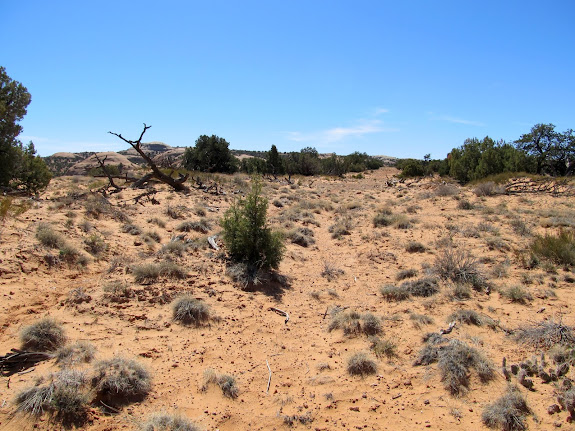 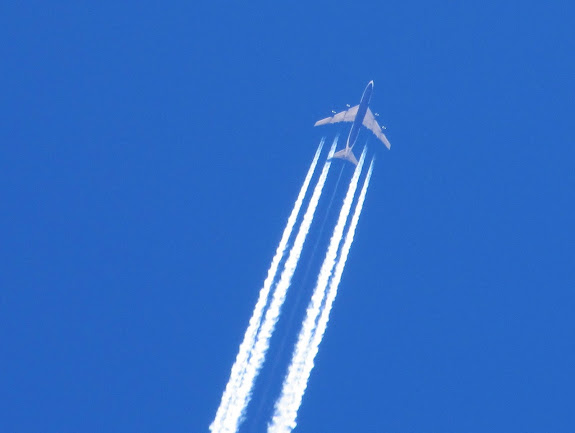 A family of wild burros 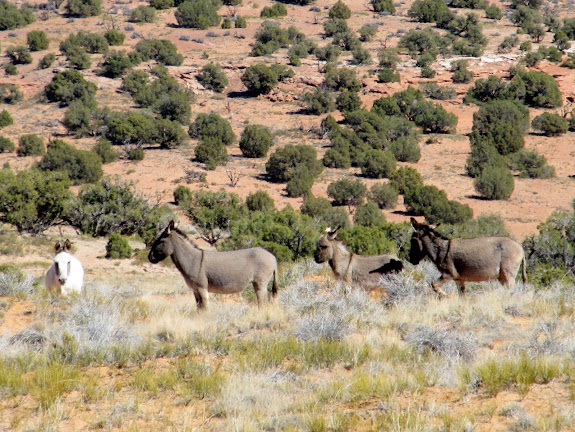 The Jeep parked in the distance 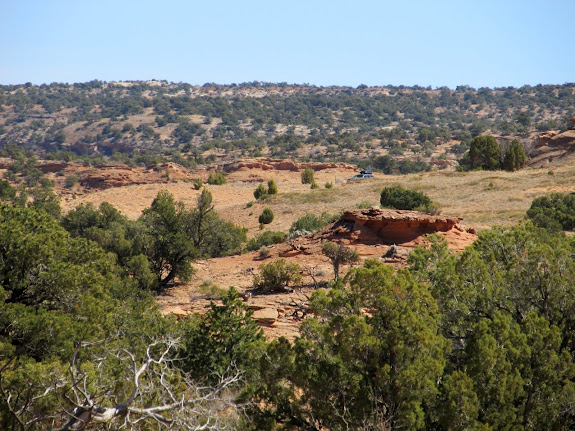