It took me a while on Saturday to decide what I wanted to do for the day, and I didn’t get to the trailhead until well after noon. I drove down the San Rafael River Road (Mexican Mountain Road) and hiked to some petroglyphs near the mouth of Spring Canyon. During the drive I enjoyed looking up into the country where I’d spent the previous Saturday hiking. Today, however, I would be hiking along an old, closed road and I knew my route would be simple and relatively easy–the mid-90s temperatures were my only hindrance. While I was parked at the “end” of the road getting ready for the hike by lubing up with some sunblock, I ran into a couple of guys I knew from Bogley: Bob and Shane. Bob approached me because he recognized Torrey, then Shane and his family walked over and introduced themselves as well. They’d all just completed the technical canyoneering route through the Upper Black Box. I started hiking and, within about 20 minutes, I’d gone a mile and reached the first place to easily access the San Rafael River. Torrey jumped right in and cooled off while I looked for a geocache that had been sitting there for almost two years since being placed without being found.

View of the high country where I spent last Saturday 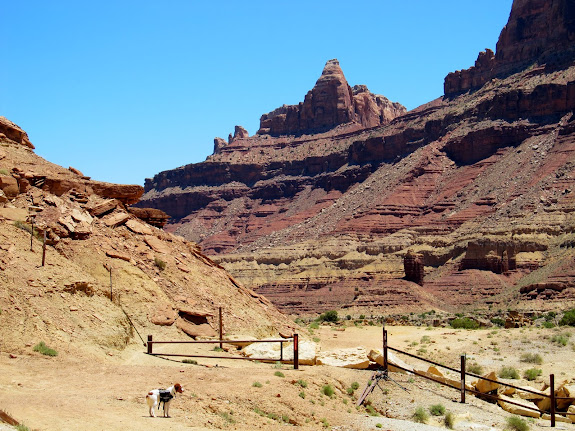 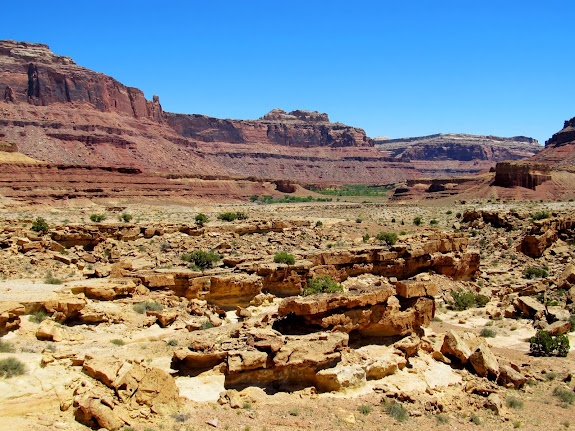 Torrey cooling off in the 95-degree heat 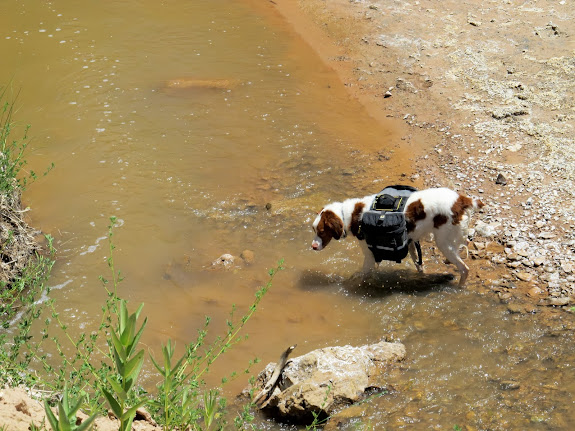 Two-year-old geocache that hadn’t been found yet 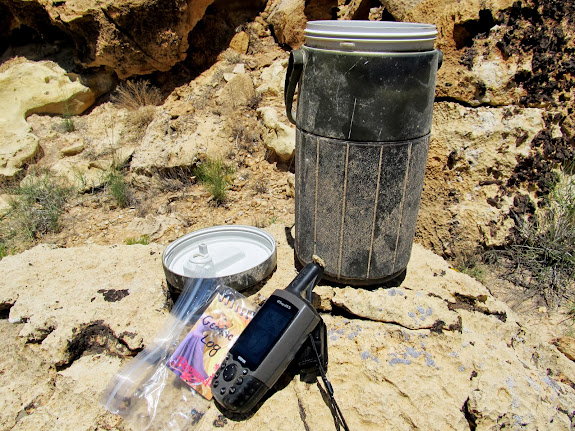 The geocache made for an easy find, then I continued down the old road. About 1.3 miles after the geocache and the first river stop, I stopped again for Torrey to go for another swim. A short quarter-mile later we reached the airstrip, which I found fascinating–what an adventure it must be for those who are able to land there! A friend had told me roughly where the rock art could be found. There was a well-worn trail from the airtstrip to Spring Canyon, and along that trail I found the petroglyphs.

Walkin’ along the river 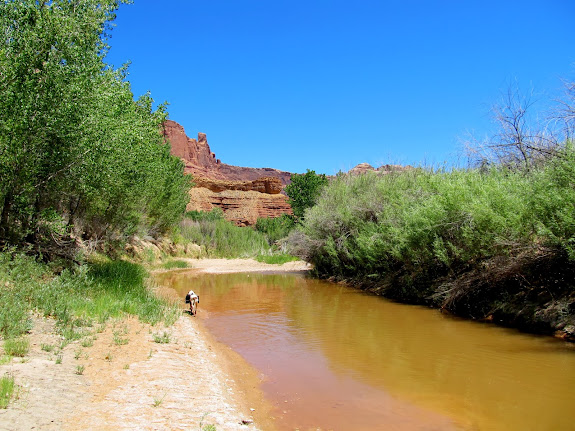 Walkin’ along the old road 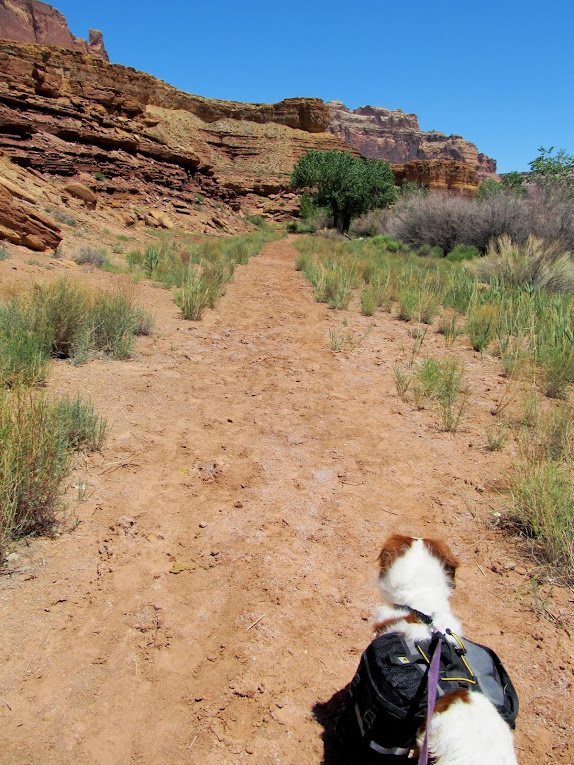 Road climbing out of the wash and up onto a plateau 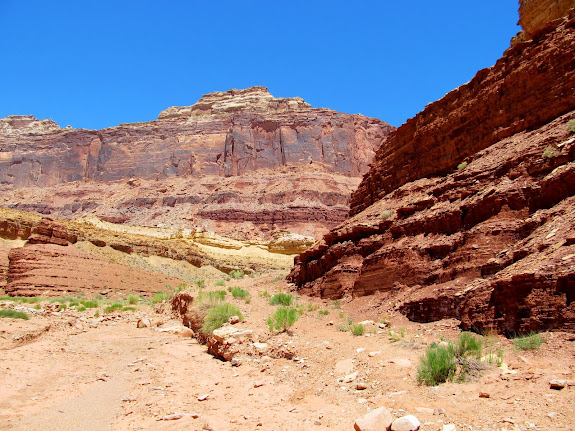 These flowers were past their prime, but still pretty in a way 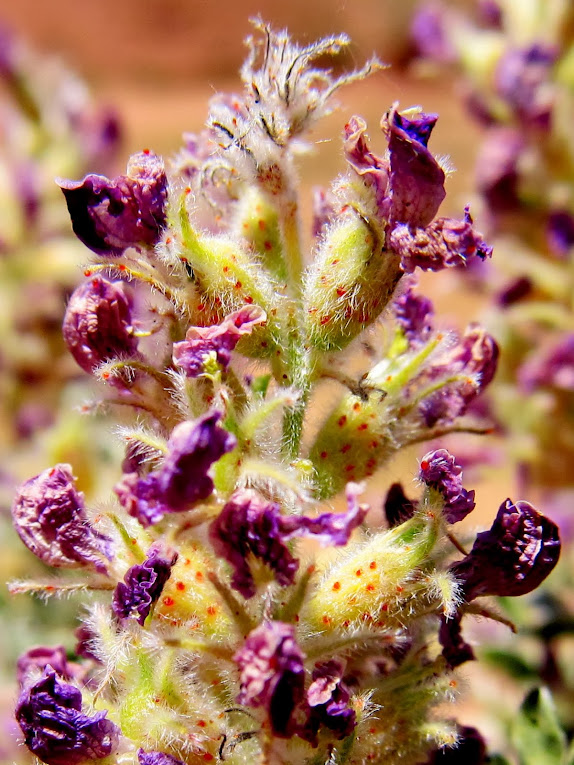 Another view into the high country where I spent last Saturday 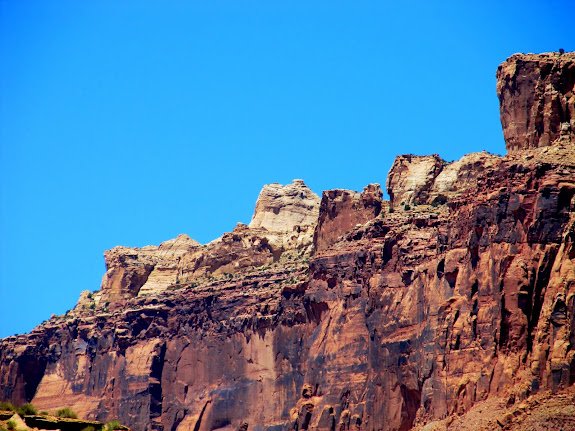 Another hot, dry stretch away from the river 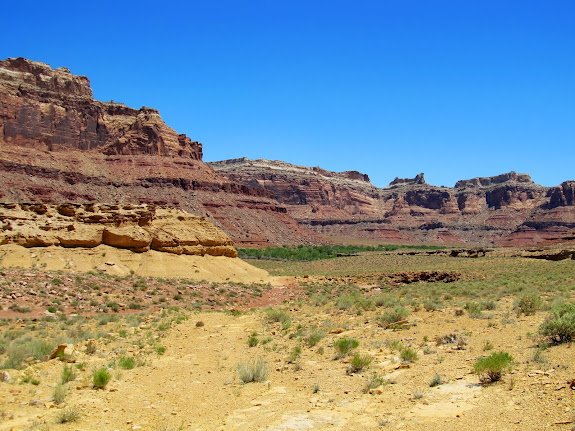 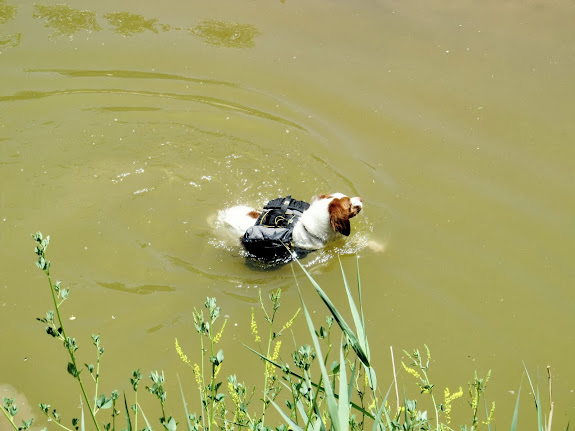 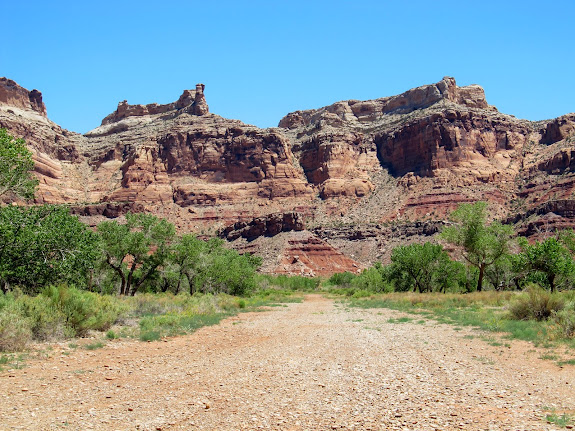 Wind sock at the airstrip 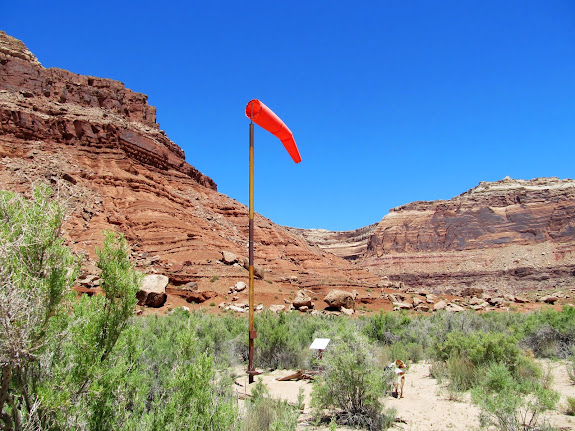 Trail from the airstrip to Spring Canyon 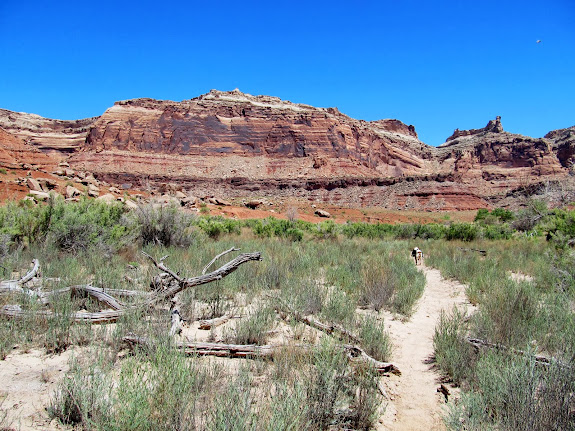 The rock art was much better than I’d been anticipating. I found three areas where there were petroglyphs, but I failed to find the historical marker that recounts a gun battle between Sheriff Tuttle and Joe Walker in 1897. I turned around when I reached the point where the trail meets up with Spring Canyon. During the long, hot hike back to the Jeep I ran into another group just completing the Upper Black Box route. Accompanying them was a cute Brittany Spaniel mix wearing a harness who had done the canyon with them. She and Torrey got along well as we all hiked back to the trailhead. In an odd coincidence, one of the guys in the group who I was talking to had attended and graduated from the College of Eastern Utah at the same time as I had (1994-1996). Back at the Jeep my GPS said I’d hiked 7.65 miles in four hours. It felt like more in that heat–my legs were threatening to cramp up like they’d done the previous weekend. 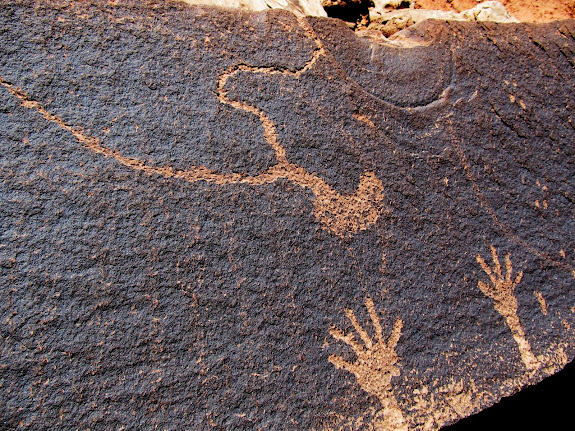 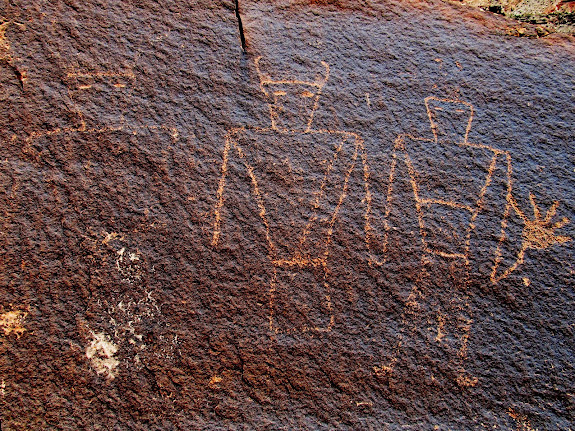 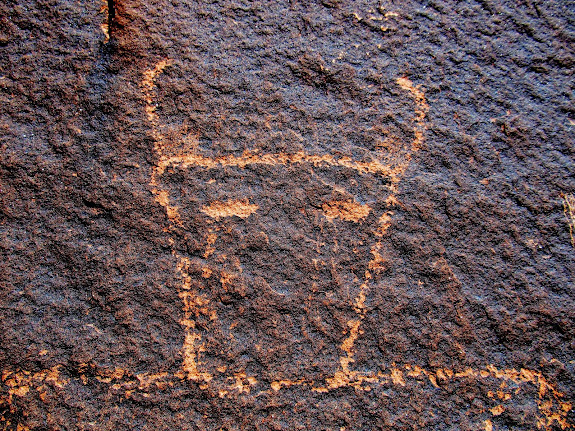 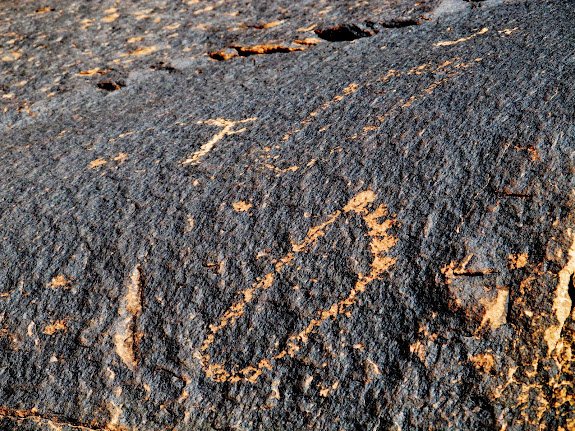 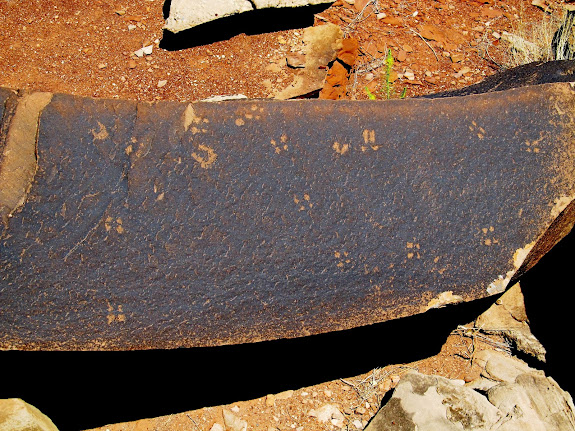 Torrey resting in the shade of a boulder 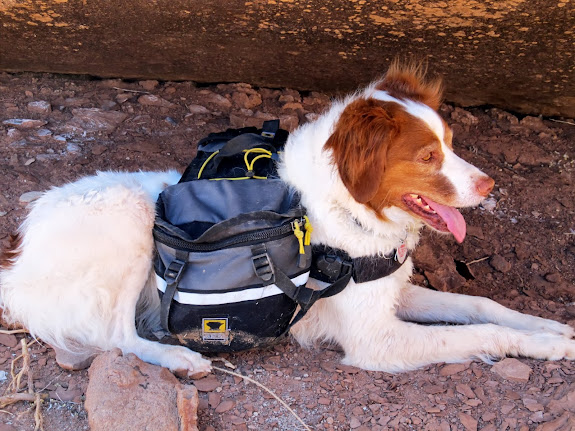 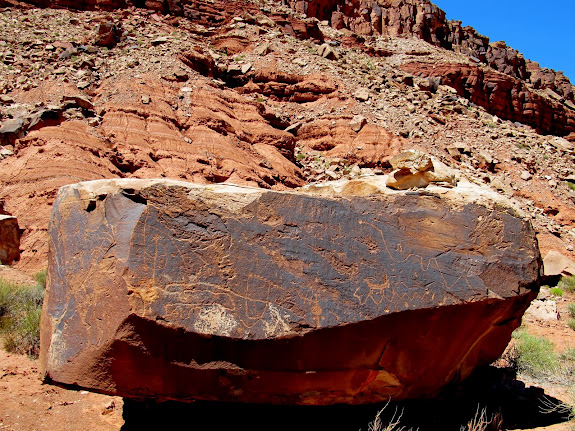 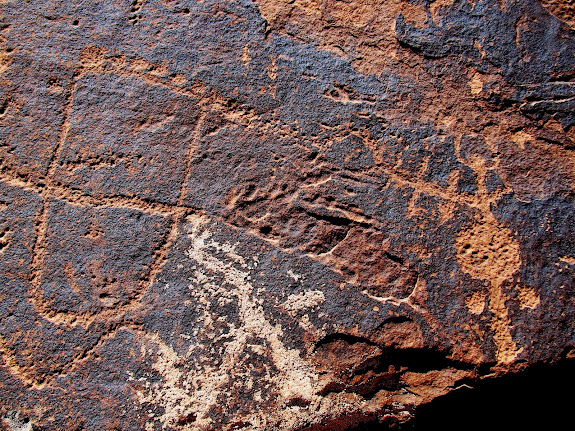 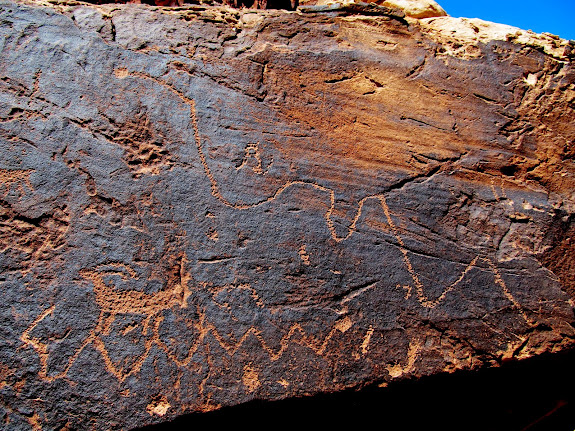 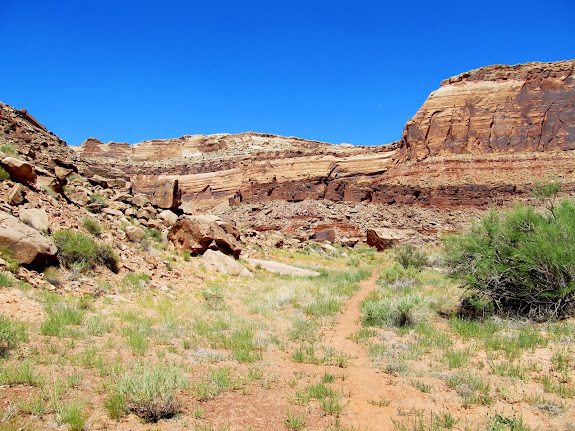 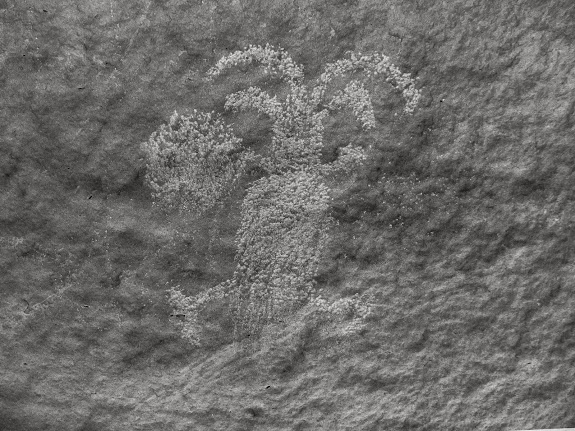 I turned back here where the trail drops into Spring Canyon 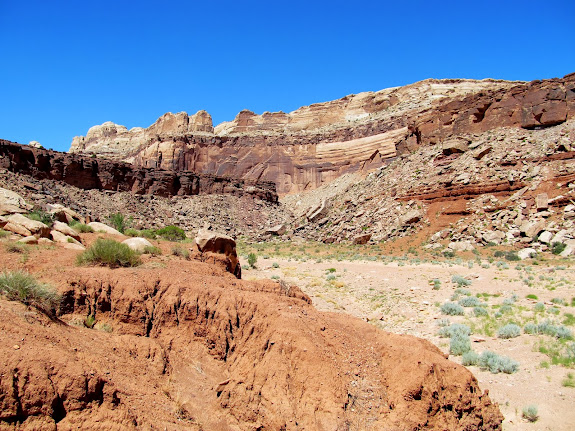 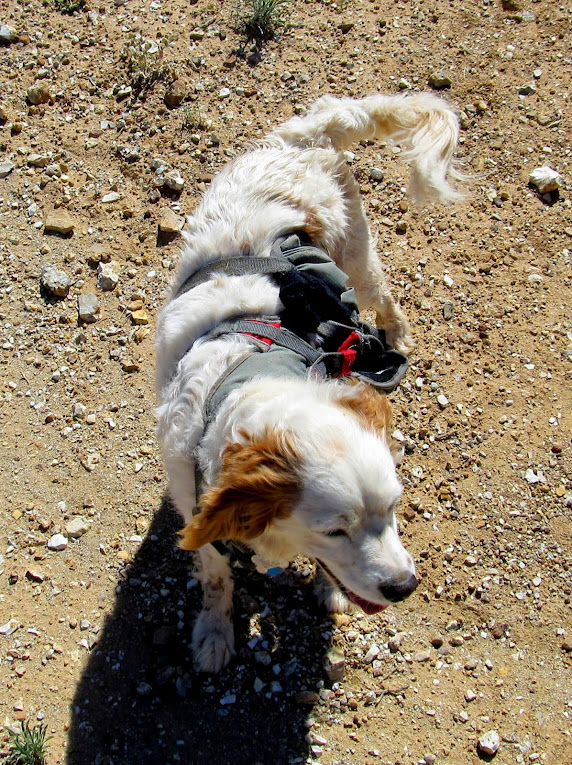 GPS stats after the hike 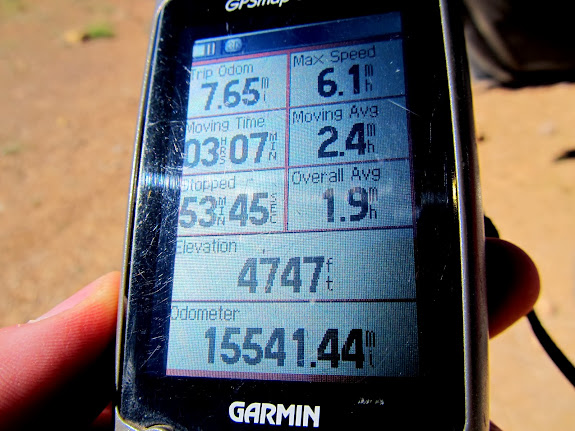 Dust on the back of the Jeep 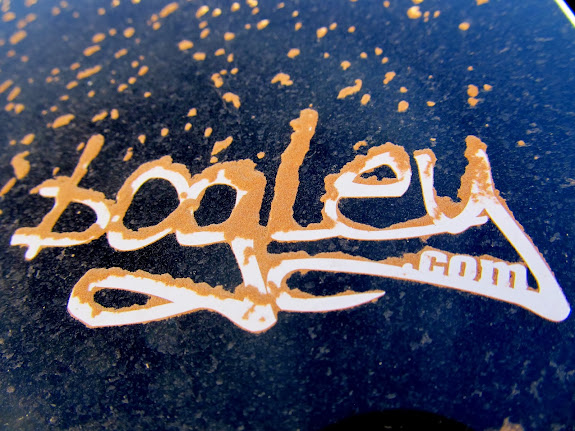